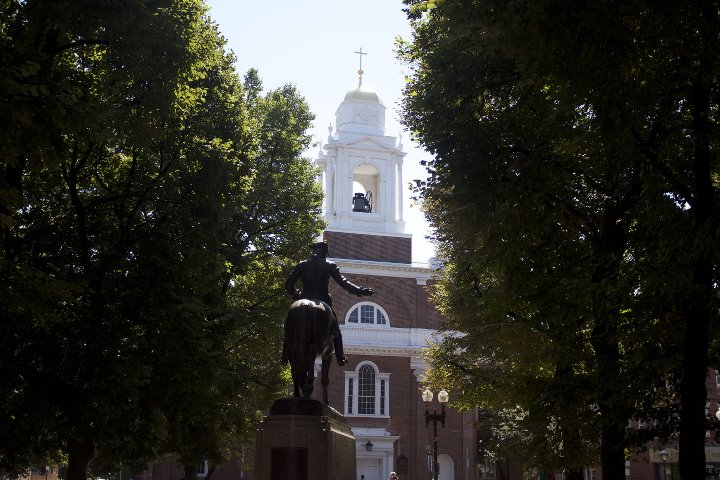 I visited New England a lot growing up. It’s been our family summer getaway since my mom was a little girl. But as a kid, and even as a young adult, I rarely took time to explore the history behind our destinations.

As I’ve grown, my interests have shifted from cross-border shopping to cross-border learning (well…and eating), and on our journeys over the past few years I’ve been rediscovering these places I thought I knew as a child. On our most recent trip to Boston we noticed a thick red continuous line, part painted, partly bricked, running through some streets.

That line marks The Freedom Trail, a 2.5 mile route past 16 historically significant sites. The trail and corresponding sites paint a vivid picture of life leading up to and during the American Revolution. But what’s even better about the Freedom Trail is that it takes you through many streets and communities in Boston where you’ll discover local food, art, and culture! 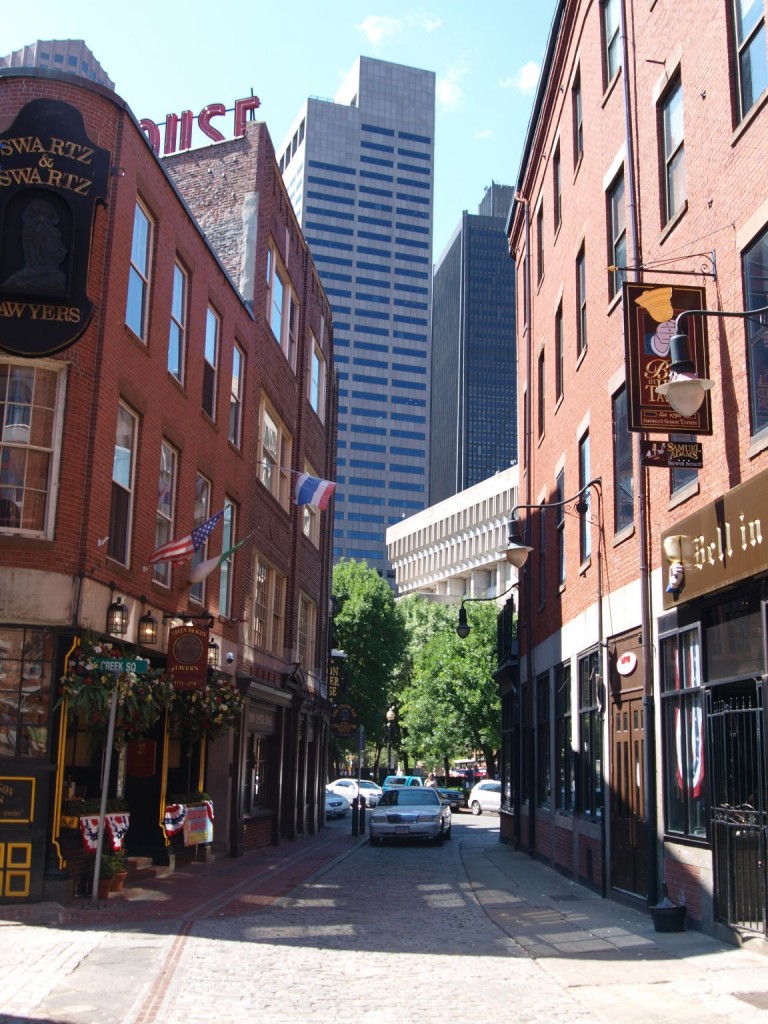 The trail was officially launched in 2000 by First Lady Hillary Clinton, but a hardworking group of local citizens have been working to restore and preserve the 17 official trail sites since the 1950s. There are a few touring options for the Freedom Trail: a guided tour, a virtual tour (through a downloadable app), or a self-guided tour. We went for the free self-guided so we could go at our own pace. 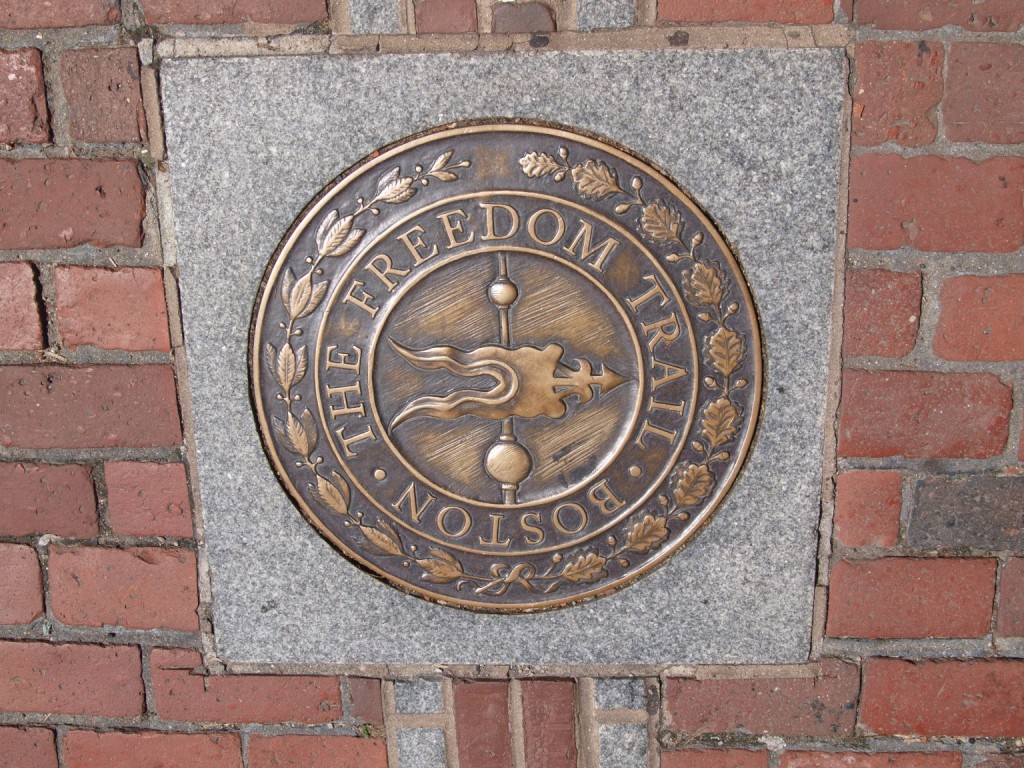 We found the red line close to the official start of the route, which begins at the Boston Common. This central park was once used primarily for feeding livestock and public hangings. We grabbed a freshly squeezed lemonade from one of the many park vendors and took a leisurely walk through the park, checking out statues and watching the swan boats go by. 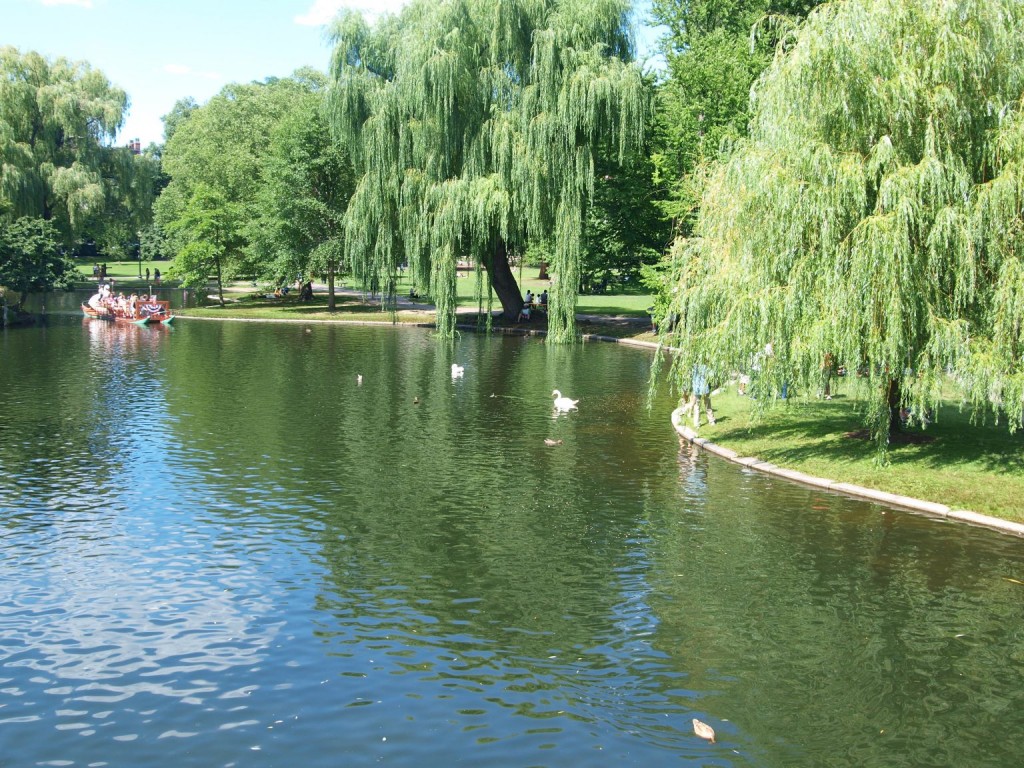 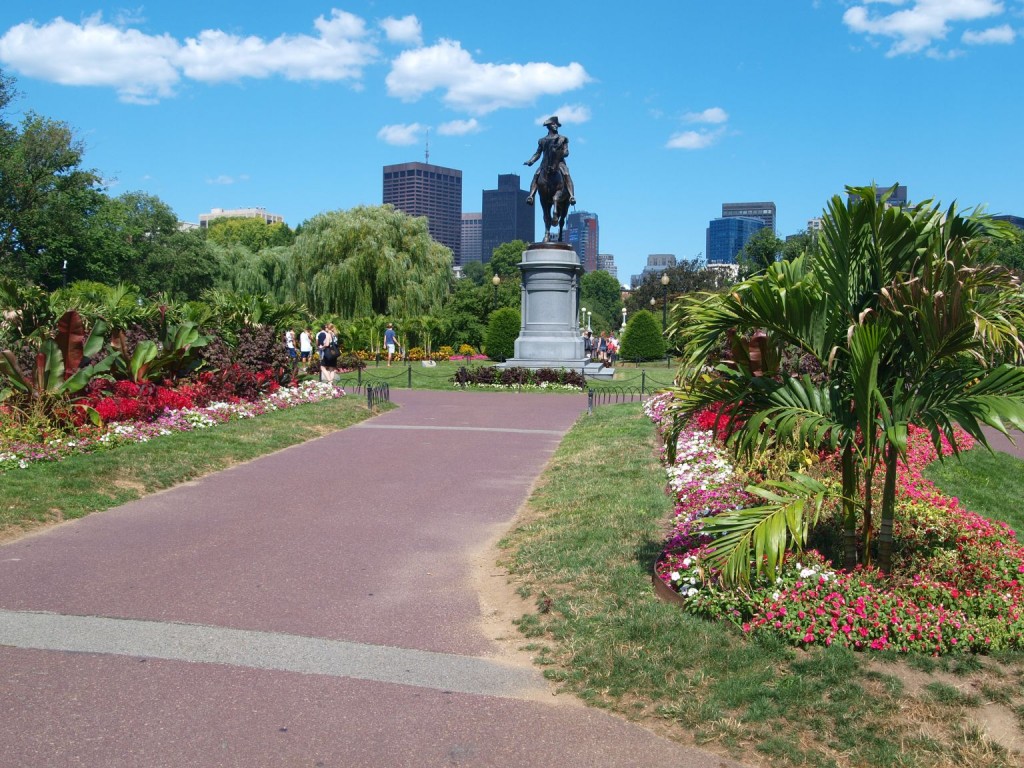 From the Boston Common we strolled by the New State House and the Park Street Church to arrive at the Granary Burying Ground. We spent a fair bit of time exploring the nearly 3,000 gravestones, among which you’ll find the final resting places of three signers of the Declaration of Independence, Samuel Adams, John Hancock and Robert Treat Paine. Paul Revere is also buried here, as are the parents of Benjamin Franklin. 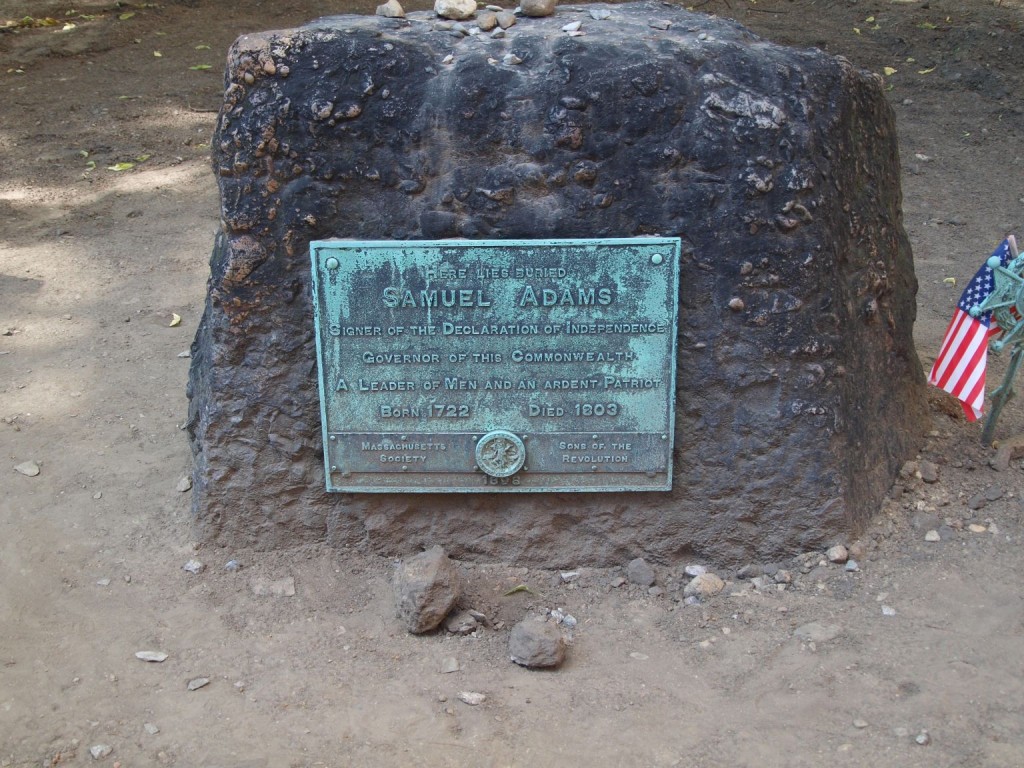 From here we walked by the King’s Chapel and Burying Ground, the First Public School, the Old South Meeting House and the Old Corner Bookstore to arrive at the site of the Boston Massacre. It was on that site in 1770 that five men were shot by British Redcoats when a mob formed in response to another man having been struck by the butt of a soldier’s musket. This pivotal event was used by Samuel Adams to stir up anger among the people, and he had the victims buried in his family tomb at the Granary Burying Grounds.

We continued along the trail past the Old State House to Faneuil Hall, where we stopped at the popular Quincy Market for tapas and some Sam Adams summer seasonal ale. This is one of the liveliest areas of Boston. There were many people, both visitors and locals, shopping, watching the buskers and doing exactly what we were doing, enjoying some good food and beer. 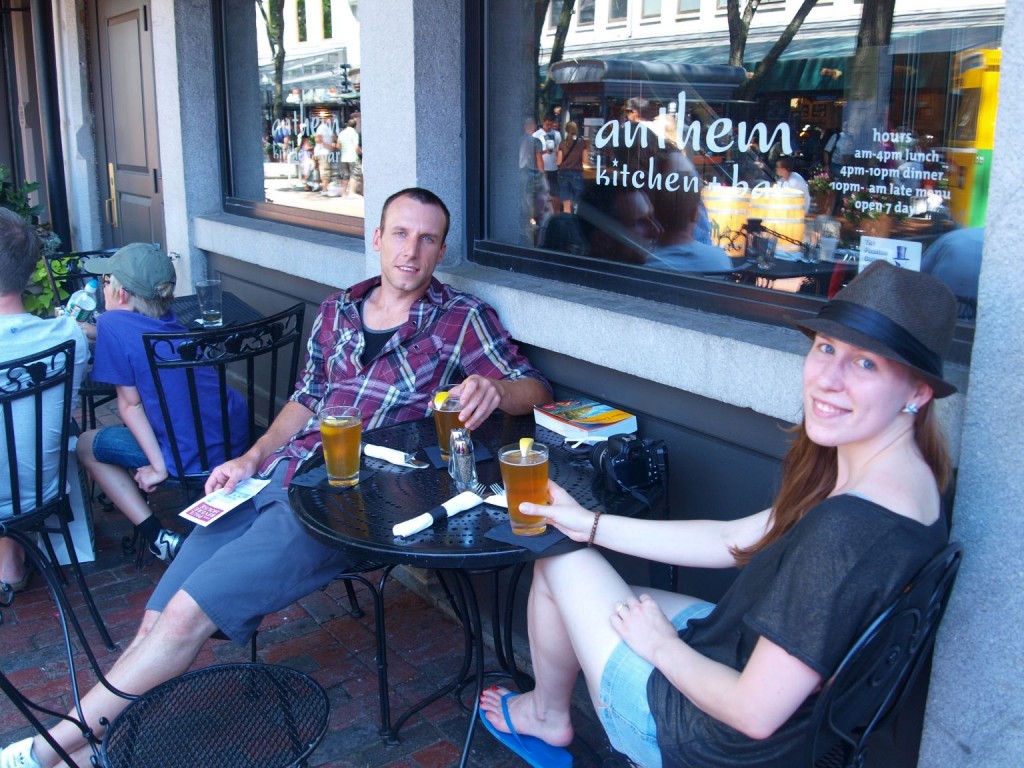 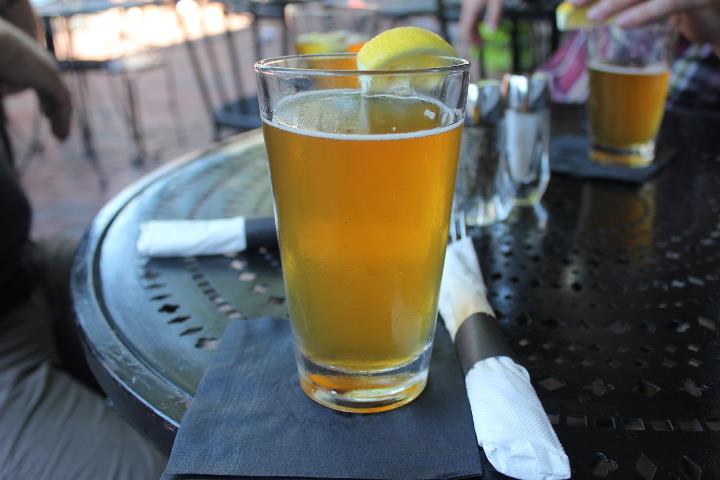 After our break we were ready for the slightly longer leg to get to Paul Revere’s house, and then on to the Old North Church and the Copp’s Hill Burying Ground. From here we crossed the Charlestown Bridge, giving us a fantastic view of all the boats on the Charles River. 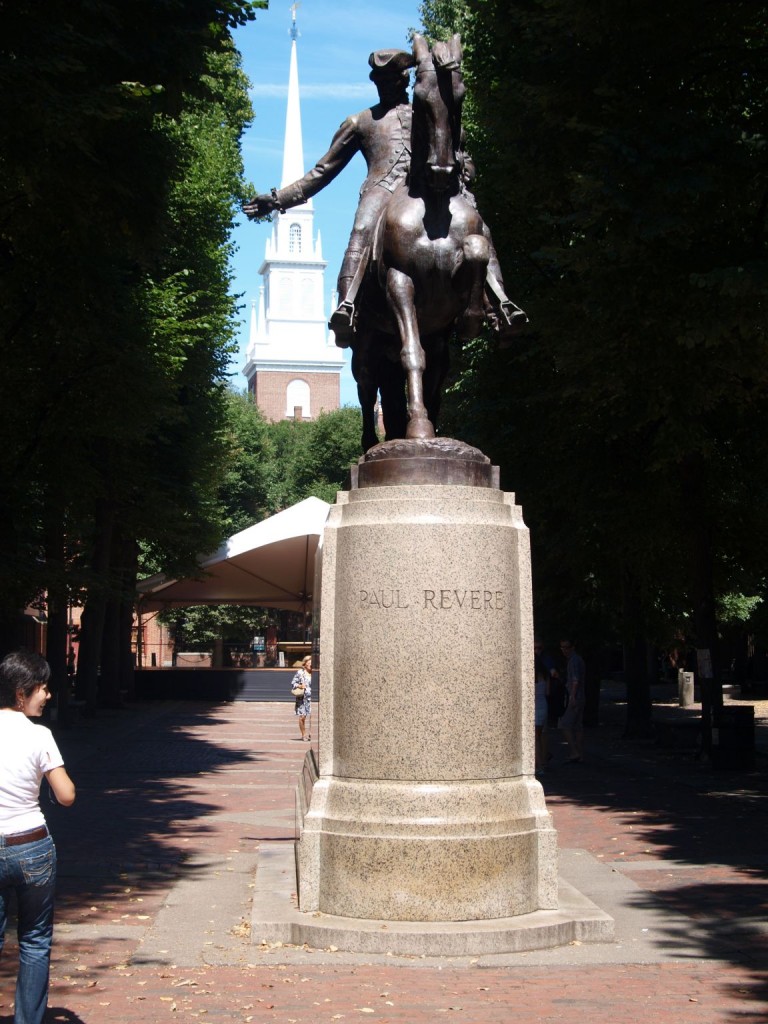 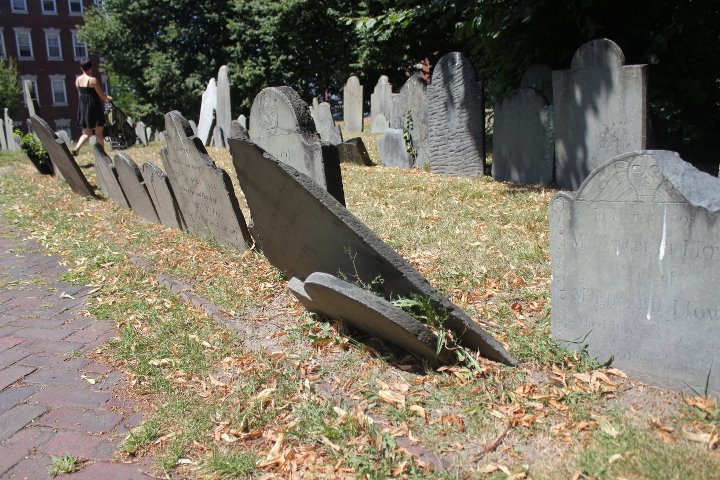 The route winds through some pretty Charlestown neighbourhoods on the way to the Bunker Hill Monument. We took in the guided description of the events of the Battle of Bunker Hill, which was the battle that showed the Colonial forces they could hold their own against the British troops, and is the source of the infamous line, “Don’t shoot until you can see the whites of their eyes.” 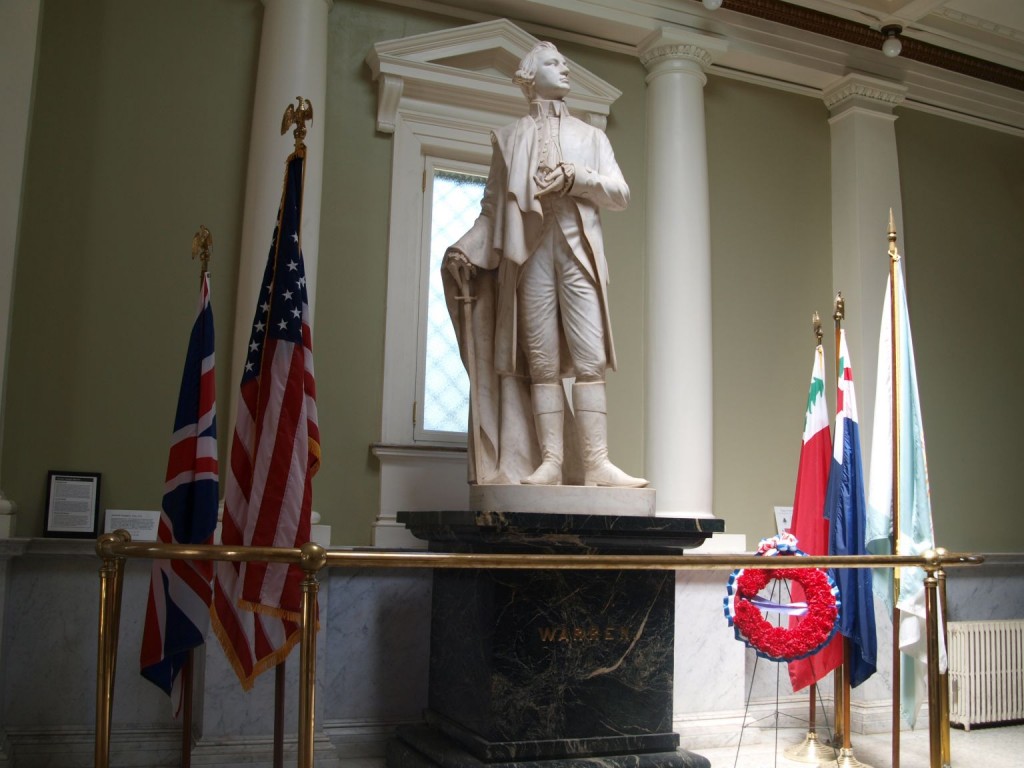 We had packed a picnic so we sat on the steps in the sun with our food while we absorbed the history and significance of the hill we were sitting on. A note to the weary, the 221 foot obelisk monument has stairs, but it could present a challenge at the end of the trail. 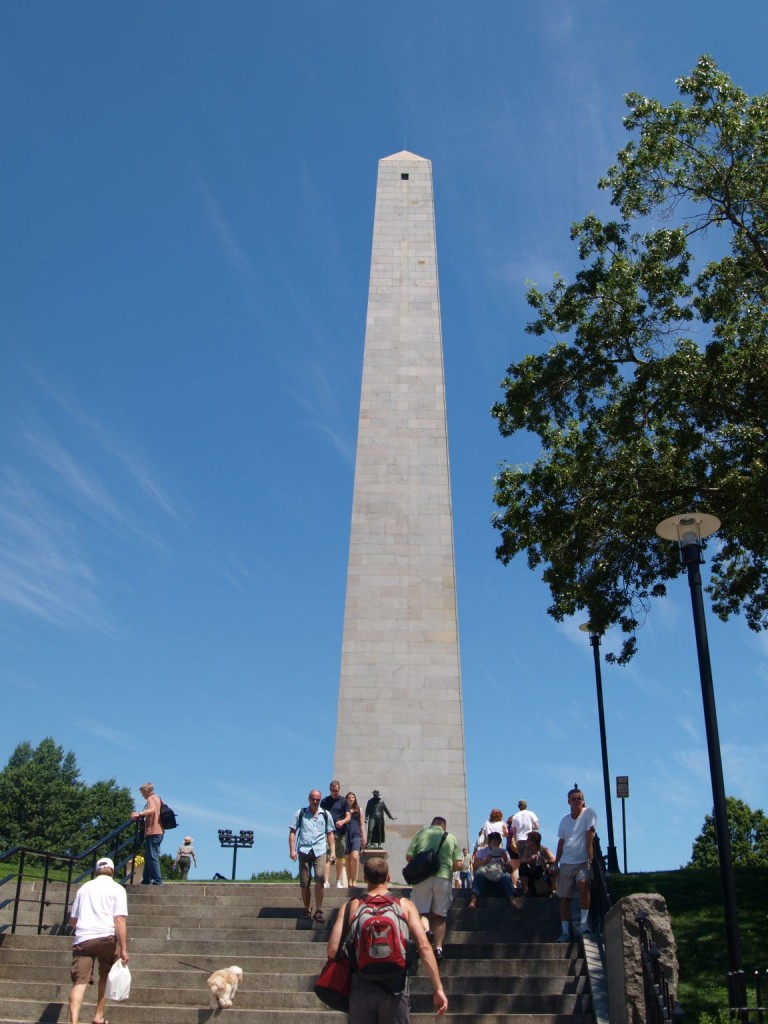 Finally we returned to the Charles River to board the U.S.S. Constitution. This stop is right on the water and on a nice day it is the perfect spot to pause and take in the view. Docked in the harbour is the U.S.S Constitution, the oldest commissioned naval vessel in the world that is still afloat. Free guided tours of the ship are available. 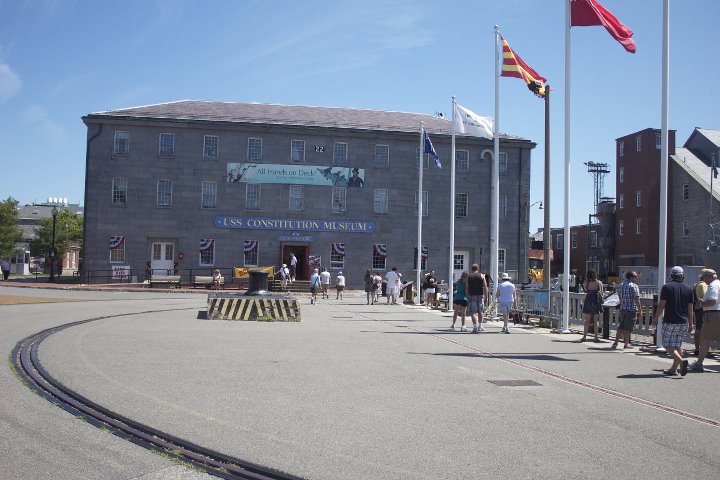 There are a few extra, unofficial stops along the trail, including the Union Oyster House. While the exact construction date of the building is not known, records suggest it is more than 250 years old. It served as a retail shop that sold imported goods and silks in the 1700s, and reopened as a restaurant in 1826. In addition to being a popular spot for the Kennedys, it is considered the oldest continuously run restaurant in the United States!

According to the official Freedom Trail website, more than 3.2 million people walk the trail every year! Guided tours (led by a character guide) are available 12 times a day during peak season (April – November) and on a more limited basis between December and March. If a guided tour isn’t available, the self-guided tour is always an option, and each site has interpretive boards.

We thought The Freedom Trail was a fun, interactive way to see the city of Boston while learning about the history of the town. It makes for a particularly good way to get your bearings at the beginning of a trip, and discover places you’d like to return to. Pack your camera and your sneakers and enjoy the walk through historic Boston.