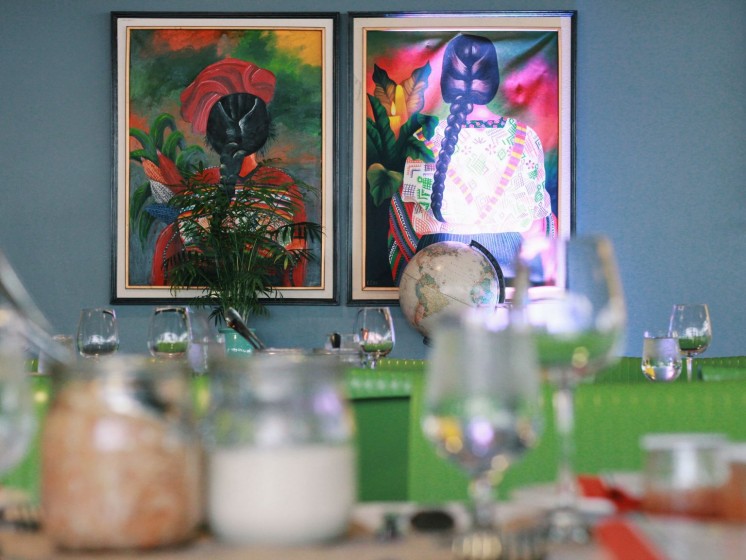 Last week I attended The Table, the first in a new series of events featuring food, culture and stories at the Halifax Seaport Farmers’ Market. The guest chef for the evening was Luis Clavel, Chef de Cuisine at Cut Steakhouse and the soon-to-open Shuck Raw Bar, and his menu was designed to take guests on a tour of Latin American cuisine.

The upper loft at the Seaport had been transformed for the occasion with brightly coloured paintings and tissue flowers, and two long family style tables set with jars of preserves, spices and sauces. You could smell the spices before even entering the room. We were greeted by sultry Latin music by Latin Drama, and cocktails made with rice and oat milk, cinnamon, and a splash of Puerto Rican rum. I was there with a good friend and work colleague, and by the time we sat for dinner we had become fast friends with two of our fellow dinner guests. Chef Luis Clavel and his mother, Maria Ramos, welcomed everyone to the event alongside members of the Seaport Farmers’ Market. Chef Luis Clavel is a fixture in the Nova Scotia culinary scene, and well known outside the province, as well. He was the first Hispanic person to be part of the culinary team Canada, and the first to represent Nova Scotia at the Culinary Olympics as part of Culinary Team Canada.

Chef Clavel moved from Puerto Rico to Nova Scotia with his family 25 years ago. The mother and son team shared stories of the early years in the province, and how Nova Scotia came to be home. He attended culinary school here in Nova Scotia. He built a community around his food here, and he’s passionate about mentoring others pursuing their culinary career in the province.

“Food is the universal language and this is why I share it with every chef that comes into my kitchen, so I can make a better province,” Chef Clavel told the group.

As he spoke, Maria expertly worked corn dough with her hands, shaping it, filling it with cheese, and pressing it onto a pan. She took the day off to come work alongside her son, and even taught him some new things in the kitchen. The pupusas Maria handmade in front of us were served alongside beef short rib empanadas, sweet corn tamales, chopped salsa, soft corn bread and crisp tortillas, crema, and crudito. There was also a fresh, beautiful ceviche, and pork shoulder that had been braised for 16 hours then pan fried in bacon fat and served with the skin, which had been boiled, dehydrated and fried. It was all served family style, huge platters of food passed person to person. By the time the first course finished, we had been eating non-stop for an hour. I didn’t think I could tackle any more food, but the next set of offerings were too tempting to hold back.

Traditionally, the main course would have been sliced and served off of a large communal spit roast, but for convenience reasons, Chef Clavel and his team prepped individual portions for dinner guests. It was a skewered mix of beef and spicy chorizo. The beef had been marinated for four and a half days and seasoned with cilantro, parsley, thyme, olive oil, and fennel. It was served with melt in your mouth beans and rice, pan fried until it caramelized, and sweet charred plantains. The meal ended with a white cake that had been soaked in brandy, simple syrup, and peaches, and topped with condensed milk, vanilla bean, dehydrated meringue, then served with an ice cream that Chef Clavel made in front of us all using liquid nitrogen. One of the band members, Marcel Nazabal, stayed behind after the band had finished to teach us a few merengue moves. Marcel is also a market vendor, selling Cuban sandwiches at the North End Farmers’ Market each Saturday. We left stuffed, something Chef Clavel ensured us was part of the experience.

There was a definite feeling of community at the dinner. The passing of plates and the sharing of food led to great conversations with people who were strangers hours earlier. The Seaport is planning to hold a few of these events each year, each with a different cultural experience. Their goal is to celebrate and recognize the tremendous cultural diversity we have in Halifax and in Nova Scotia. The first event sold out in a matter of days, and the details and dates for the next one are not yet available, but I’ll aim to share them here once they’re out.