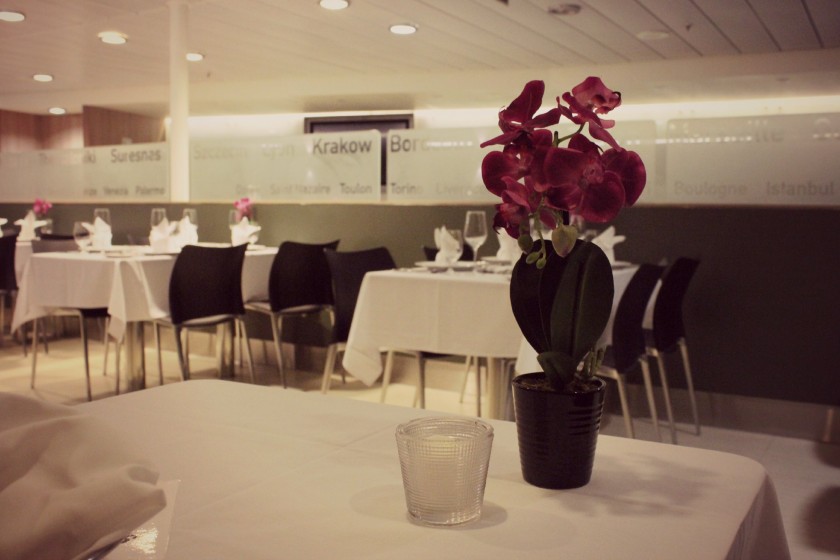 The air is really nice on the water tonight. We’re doing our final loop of downtown Portland, picking up a few local goodies we fell in love with during our short stay before boarding the Nova Star.

I’ve never been on a boat quite like this. Nine floors, six dining & drinking areas, a spa, shop, entertainment lounge, and casino. And all with breathtaking ocean views. It’s quite the ship. 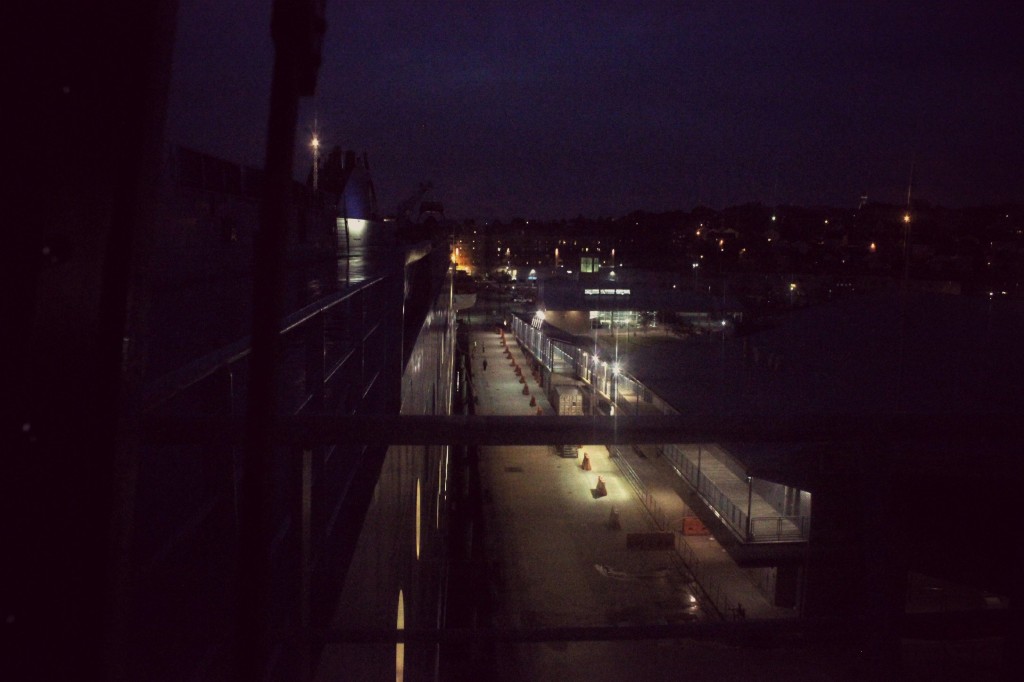 We’re guests of The Nova Star on this journey. As an extra surprise, they invite us to the deck to meet the captain and watch the departure. Being on deck makes me feel as close as I’ll ever get to feeling like I’m on the Starship Enterprise. The captain gives commands in the dimly lit room as bright lights, buttons, and screens flash. The engine kicks into gear, and I can see staff back on the dock throw the ropes from the dock into the water. We’re off.

We take a tour, and then settle in for a late dinner at Currents. Since boarding, we’ve met more staff than I can easily count. There are 10 alone minding the tables at Currents. There are four other tables of passengers dining alongside us. 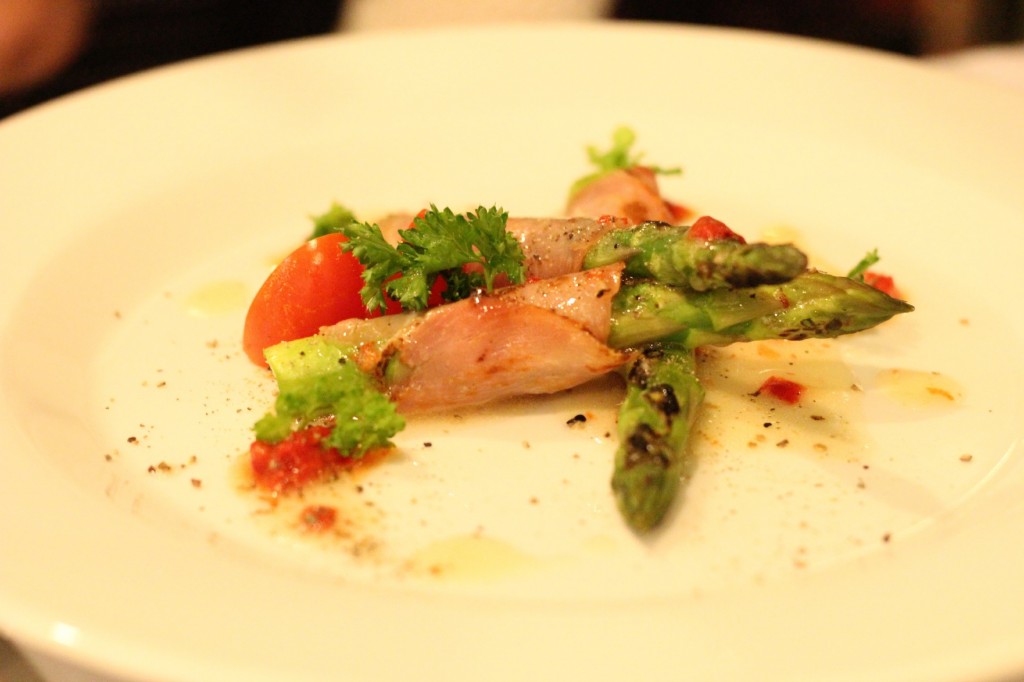 I start with the prosciutto wrapped artichoke and Drew orders the lobster stuffed ravioli (made with Maine lobster). Both are good but his is better. In fact, his is really very good. Beautifully presented, hand stuffed and bursting with local lobster. 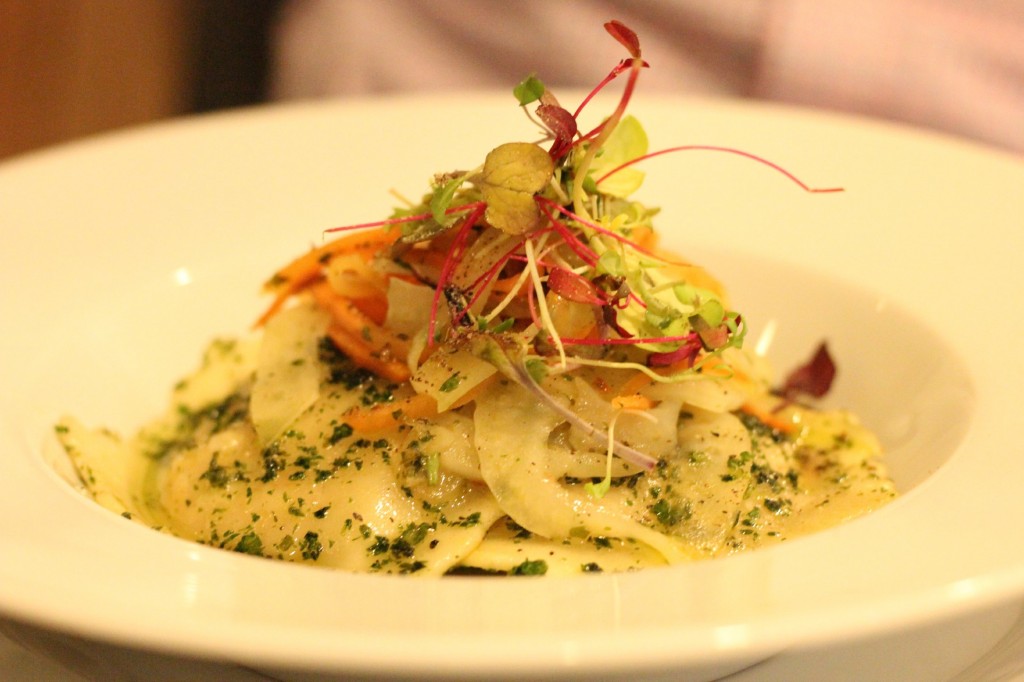 Next we try the 10 oz steak for him and the lobster risotto for me. 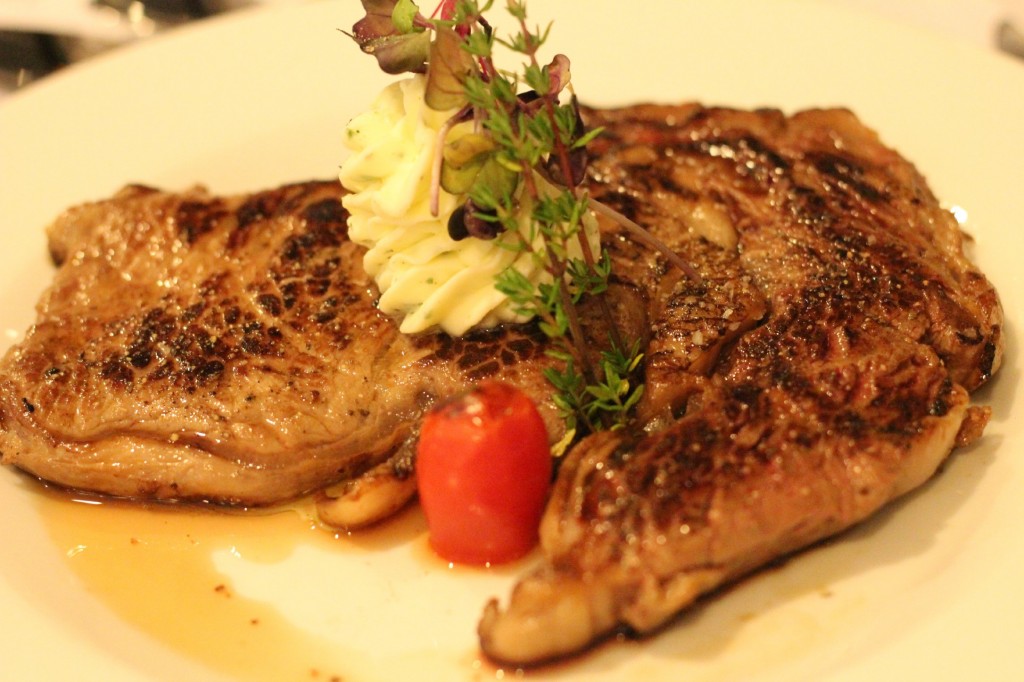 “Why are you ordering risotto, you hate everyone’s risotto other than your own?”

“I know, but THIS one has a whole lobster tail.” 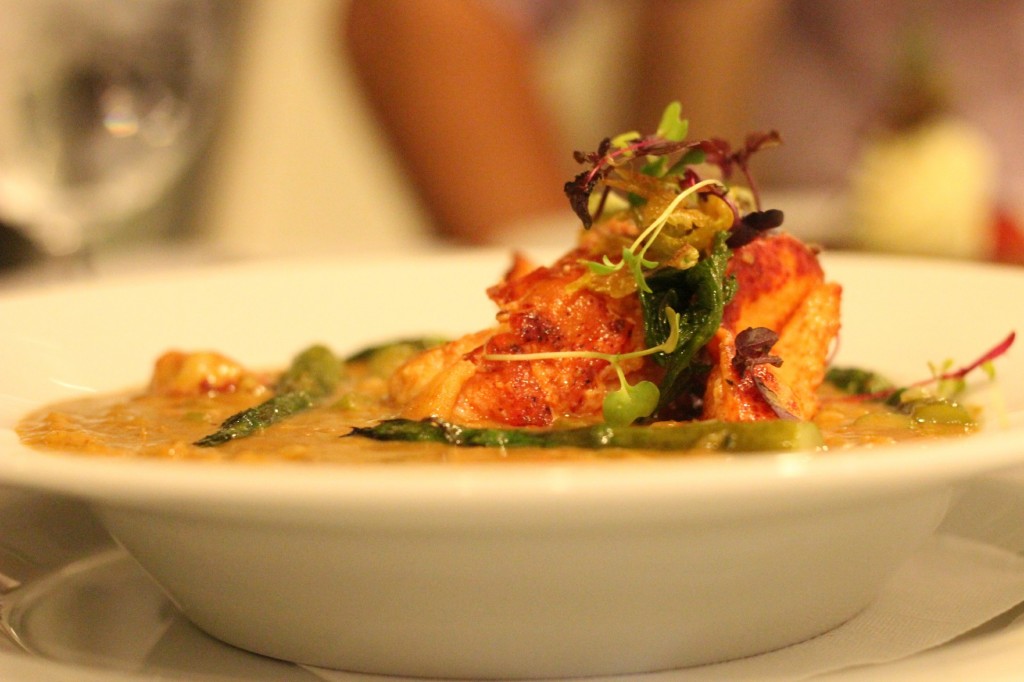 I’ve been perfecting my risotto since traveling to Italy for a summer six years ago, and I happen to think mine is pretty spectacular. It’s the first meal I made for Drew when we started dating, and my go-to meal to impress visiting guests to our kitchen. The risotto on Nova Star is probably the first risotto I’ve had since Italy that wasn’t made in my kitchen that I’ve liked. 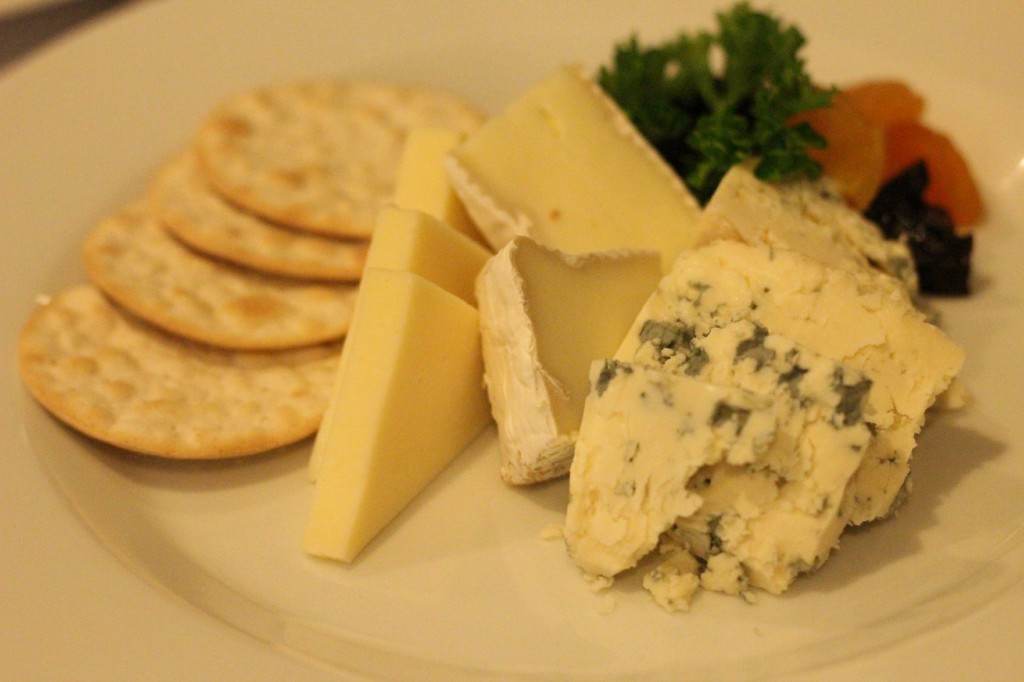 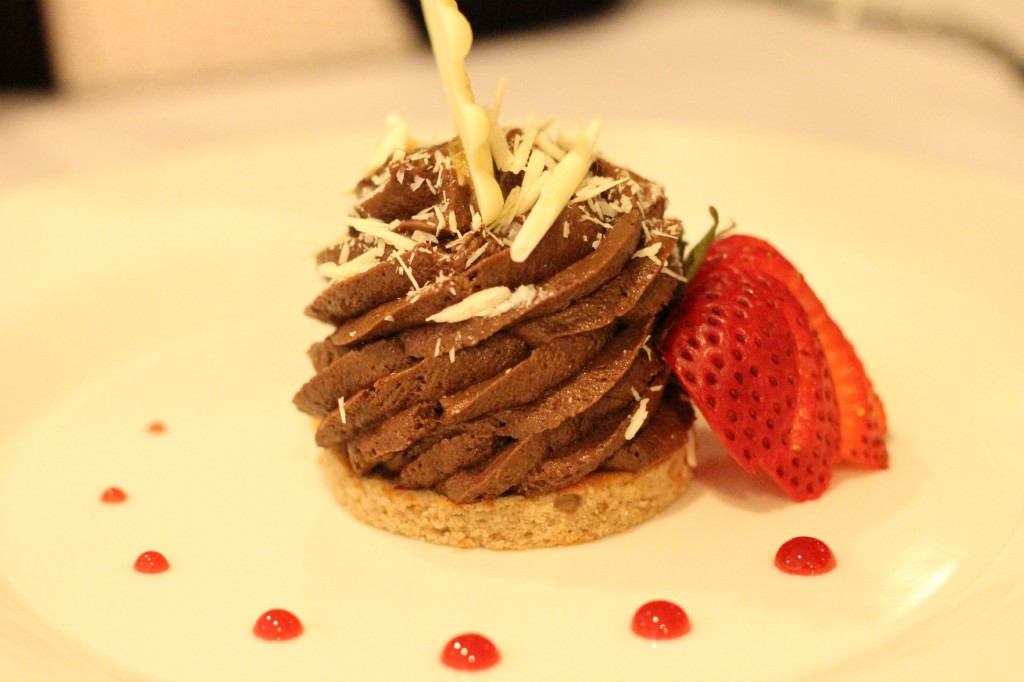 Between my full stomach and the rocking from the waves, I’m sure I won’t be able to sleep. I get motion sickness just from driving in the back seat of a car. And eyes closed, I do start spinning, but it doesn’t last. I’m out within minutes of hitting the pillow. Which is good, because when you’re on a ship like this, and you just so happen to be heading east, you don’t want to sleep in and miss the sunrise. 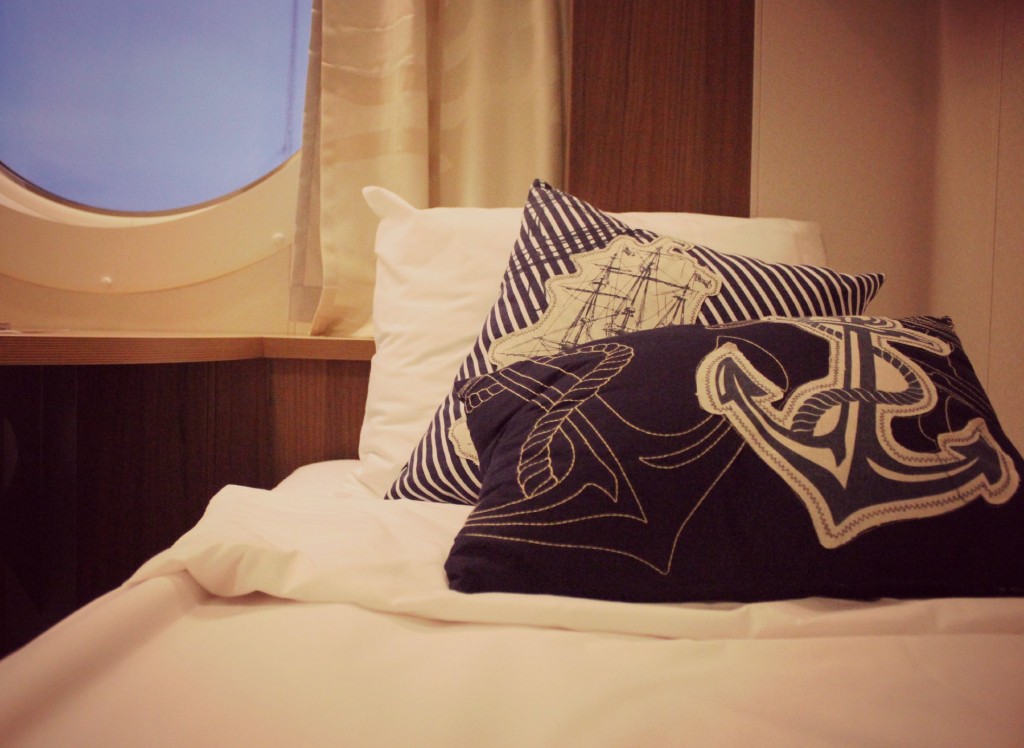 We wake at 4:30 and take turns in the in-room shower. The shower has surprisingly strong, hot water pressure. It’s the kind of shower experience you want to close your eyes for until oh, no wait bad, dizzy, falling, ahh! Still on a ship.

The boat is so quiet this early in the morning. The staff that lined the halls last night are no where to be seen. The cozy chairs in the Keys Lounge where we sit to wait for the sun mixed with the rocking of the ship threaten to lull me back to sleep. And while we wait, we reminisce about the journey so far.

Unfortunately, it’s too foggy to see the sun come up, but the morning sheds a whole new light on the ship. The large windows that merely reflected the interior last night finally show off the view of the water.
Drew is snoring beside me, blissfully passed out at the front of the ship. I take that as our cue to go do a little more exploring in the morning light (and then maybe a few more minutes in bed before we need to disembark). 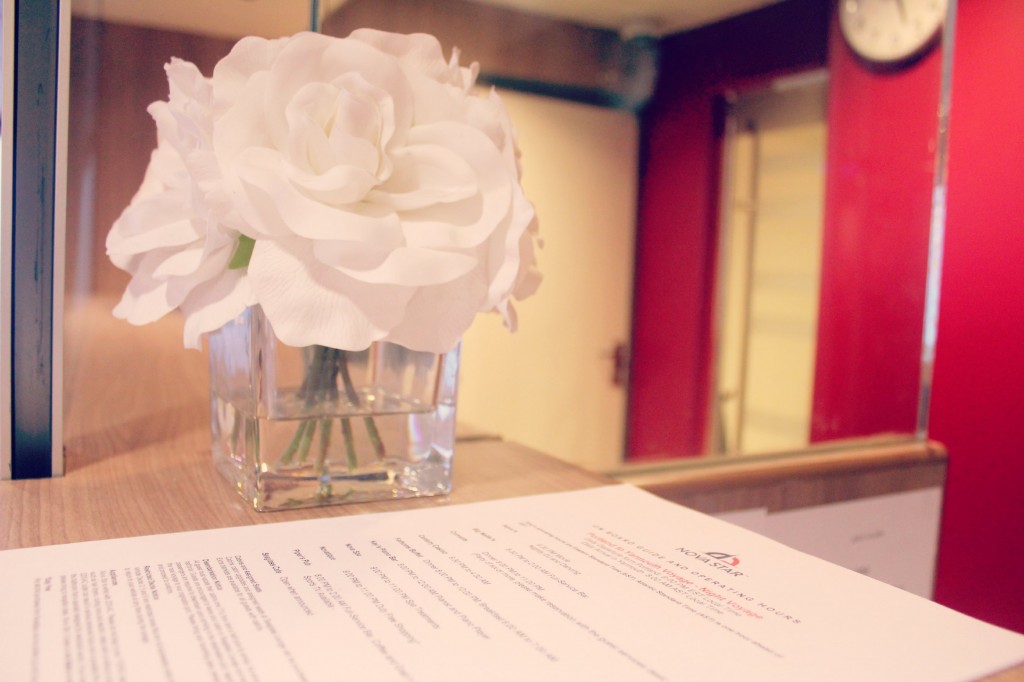 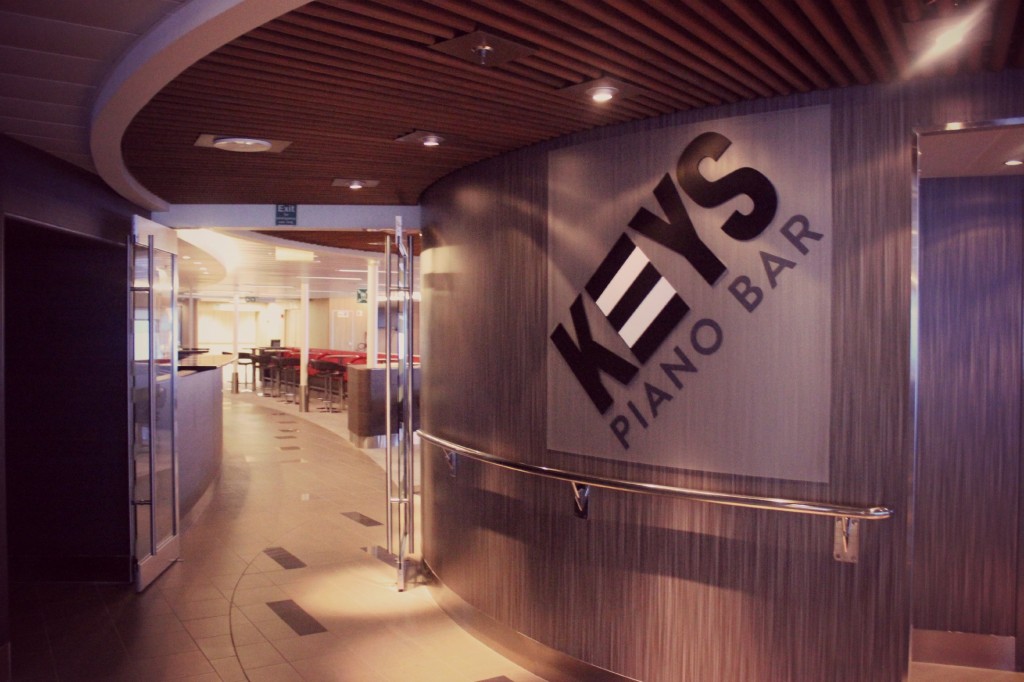 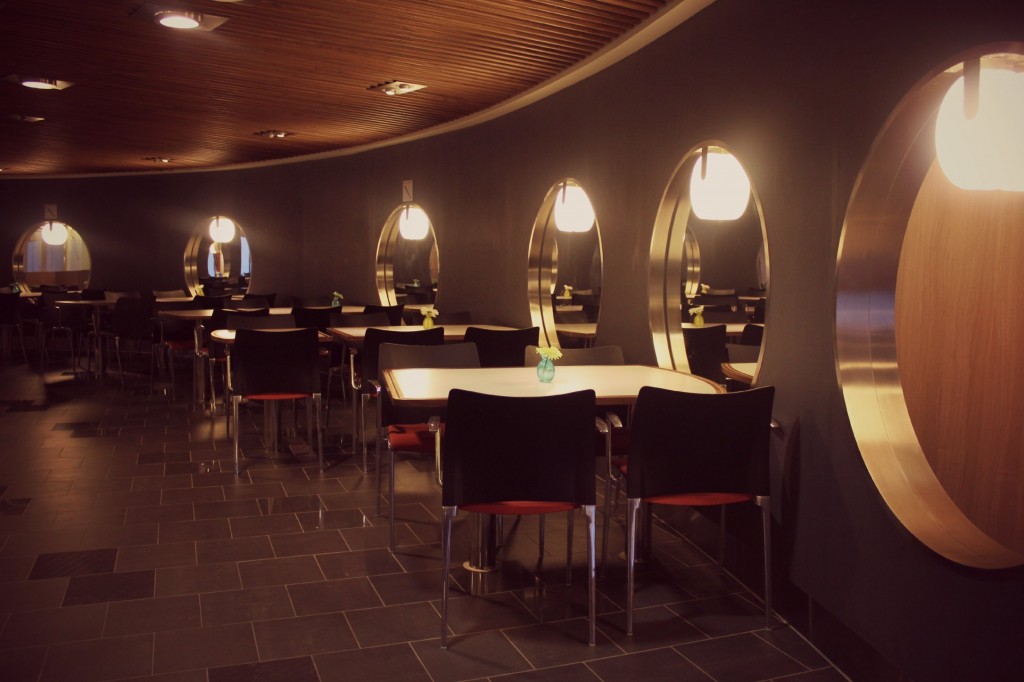 We both fall back to sleep, and wake to an announcement on our impending arrival. Cabin passengers are required to vacate the rooms one hour before arrival time. This not only gives guests a nice final chance to explore the ship, it gives staff a chance to begin preparations for the next departure.

The Nova Star makes a round trip daily, departing Yarmouth each morning at 10 am AT and leaving Portland each night at 9 pm ET. The crossing takes 10 hours each way, the same time it takes to drive but with a lot more space to stretch your legs. It’s also way more relaxing than the drive, more of an extension to your vacation whether that’s in Nova Scotia or Maine.

We enjoyed having time to sleep and relax before our next adventure creating a video series for the Acadian Passport. We love road trips, but it was nice to let captain John take the wheel this time.

The new ferry is still just that, new, so they are still working out a few details. Passengers can soon expect to see local artwork from both shores displayed on the ship in a rotating gallery. The on-board shop will also soon sell artisan goods like soaps and jewelry made in Maine and Nova Scotia.

The ship details originally stated there was a gym, and there is, but it isn’t open to the public, it’s a crew feature. Pending space, they may also add this feature in for guests. As travellers who try to stay active on the road, we hope the public gym comes to fruition.

I also hope to see some NS food added to the menu (though that’s my local pride talking). Currently all food is sourced in Maine. They have some lovely items from there, though, like the delicious Maine lobster we enjoyed at dinner, and Shipyard, Geary’s, and Allagash, Maine craft breweries. They do serve some Nova Scotia wine on board, though.

Internet is available at a cost of $5 per hour (satellite connectivity is expensive), something we didn’t realize until it was almost time to disembark. We checked for signal when we got on the ship and didn’t get any pick up from our rooms. In speaking to a fellow passenger, we learned that it is available in certain parts of the ship. While we probably would have opted for internet, it was really nice having 10 disconnected hours to really enjoy our food, surroundings, and each other’s company.

Like most tourism related activities and services, fares are based on seasonality. They are highest during the peak summer travel season, and lower during shoulder season.

Because the ship is new, they’ve been offering some discounts this summer (they’re calling it the “Maiden Year Bonus and it is about 20% savings).  Walk-on tickets start at $111, and if you are under 18 and traveling with family, your passage is free.

If you want to bring your car (something we didn’t think was necessary for Portland but which we would probably advise to those visiting Nova Scotia) it starts at $99. However, bicycles are also a great option for Nova Scotia!

Sleeping options vary. A reserved seat starts at $30 and cabins range from $103 – $199. We had an ocean view room, a premium option. The room was nice but the passage was almost entirely made in the dark so don’t feel like you’re missing too much by opting for the lower priced rooms. 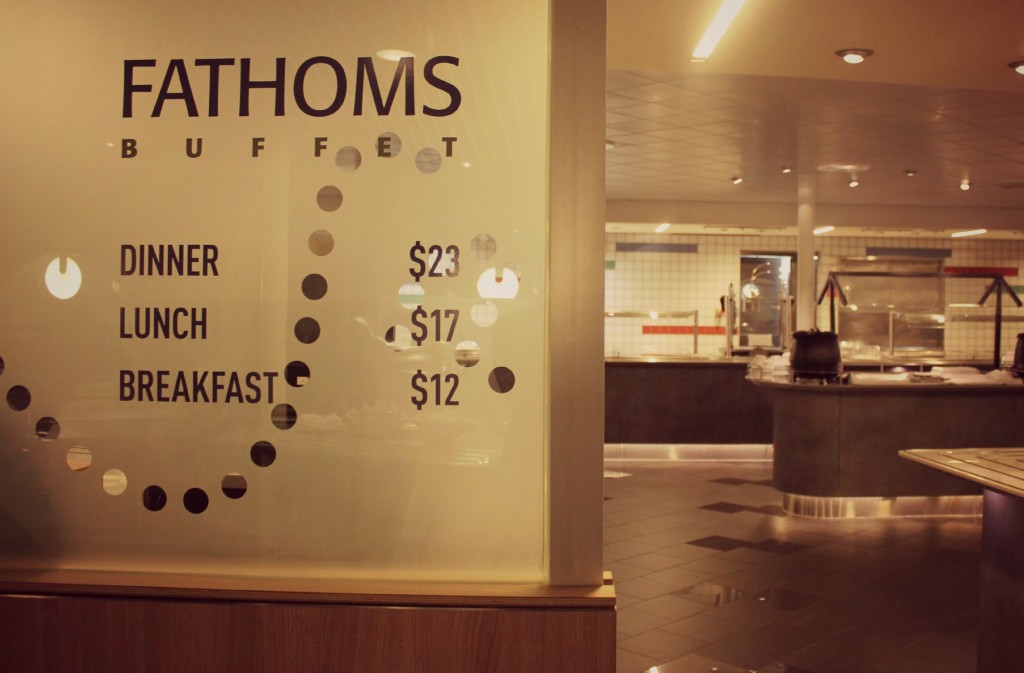 Breakfast prices range from $4.50 for breakfast pastries to $12 for an all you can eat breakfast brunch. There is coffee service in the Keys Lounge, where you can watch the ferry come into port (at least on a clear day).

Have you tried out The Nova Star? We’d love to hear your thoughts in the comments below!

We contacted The Nova Star because we thought information on the passage would be of interest to our readers. They covered most costs associated with our passage (tickets, room, car passage & dinner).  The opinions in this piece are our own.