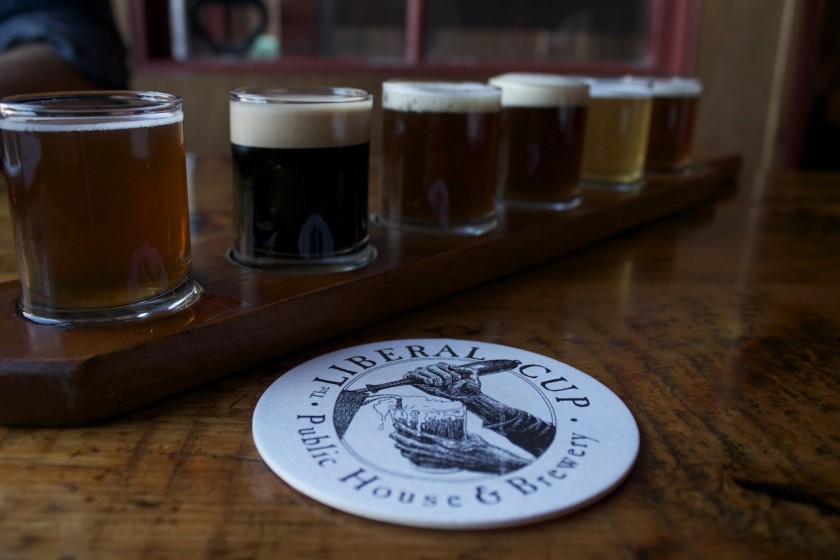 The Liberal Cup is right off the highway. So close, we almost drove right past it.  The building is one of those places you’d expect to find on every main street in every town across America. There’s lots of exposed brick, thick wood rafters, low ceilings and glass walls at the back exposing the barrel system used to brew their extensive line-up of beer. It’s the kind of place where the wood and the bricks have witnessed generations of stories and the wear on the floors bears proof of it.

With just a little eavesdropping, it quickly became clear that The Liberal Cup has a lot of loyal locals. Those locals take their food and beer seriously. It was also clear why people would decide to come back again and again. Both the owner and the chef made the rounds to personally greet patrons, joke with regulars, and answer questions.

And they also come for the beer.  The Liberal Cup keeps six of their own beer and one guest beer tapped at a time. The list rotates frequently. We ordered a sample tray which had a 4 oz sample of each of their six beer on tap. The stand-out was the Dummers Lane Brown Ale, with its incredibly rich roasted barley and malt taste.

The beer is brewed by Jeff Houghton (owner/brewer) & Kevin Bricker. And while we didnt catch the chefs name, we have to give props to him, too.  This is no classic pub fare.  A sample of that nights specials were Sirracha duck wings with kimchi salad ($11), Crab and Lobster cakes with scallions, shaved asparagus, salad, and herb raita, ($12.50) and marinated lamb lollipops with goat cheese grits and pistachio lemon pistou ($12).Their regular menu is wallet friendly, with 90% of the items under $10. We’ve been prioritizing beer on this trip (there are only so many dollars to go around) but we were really sad not to dig into the menu at The Liberal Cup.