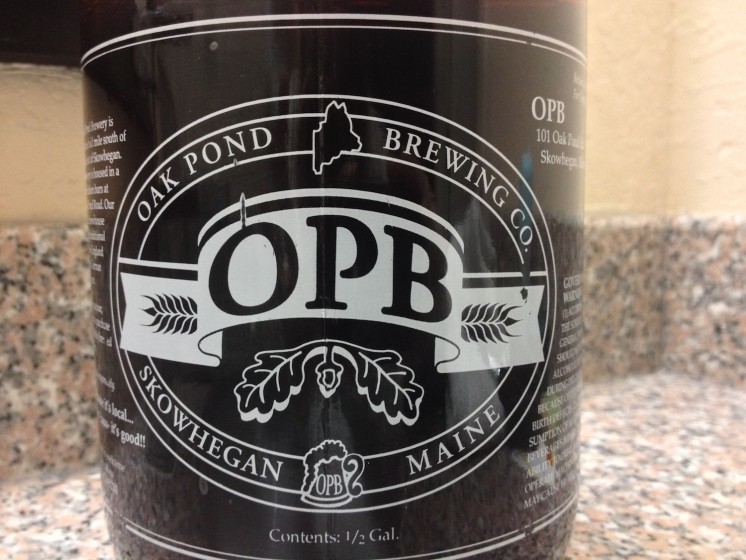 Something we’re learning about Maine is that brewing isn’t just a state tradition, it’s often a family tradition. What we’ve learned about family-run breweries is that the family name is at stake, so they don’t mess around with their beer, and do what they can to maintain the family reputation.

Oak Pond Brewing is a little bit off a road that itself is off the main route. You have to be up to getting off the interstate to get here, and you have to watch out for it. The signs are small and the turn-off is a bit inconspicuous. If you’re heading west from Bangor and you see signs for Lake George on the #2 road, you’ve gone just a bit too far.

Even heading down Oak Pond Road we passed by it and had to double back. The place reminded us a little of Big Spruce in Cape Breton, off a back road in a pretty non-commercial looking building. Essentially, you’re walking into what feels like someone’s basement, only it happens to have a 14 barrel system.

Oak Pond Brewing was first opened in 1996 and operated until 2001. In 2003, Nancy and Donald Chandler reopened the brewery. Adam Chandler is now Oak Pond’s brewer, taking after his father in specializing in lagers, rather than ales. They sell their beers in 650mL bottles ($15 for a mixed 4 pack) and in clear growlers ($6 deposit plus a $6 fill).

We got to sample four of Adam’s brews, including the Dooryard Ale, White Fox India Pale Ale, Nut Brown and the Storyteller Doppelbock. We’ve been fans of dark lagers ever since Propeller released their Nocturne Dark, and we were pretty pleased with Oak Pond’s. We ordered a growler of the Storyteller to go while chatting with Sean, the president of the Maine Brewers Guild, who happened to be visiting OPB at the same time. He was very familiar with Nova Scotia, having spent a fair amount of time there, and was as excited by the growth we’ve had in our brewery scene as we were when he rhymed off all of the places we had to check out in Maine.

For the lager fans, A Maine beer trip would not be complete without a pint of Oak Pond Storyteller.