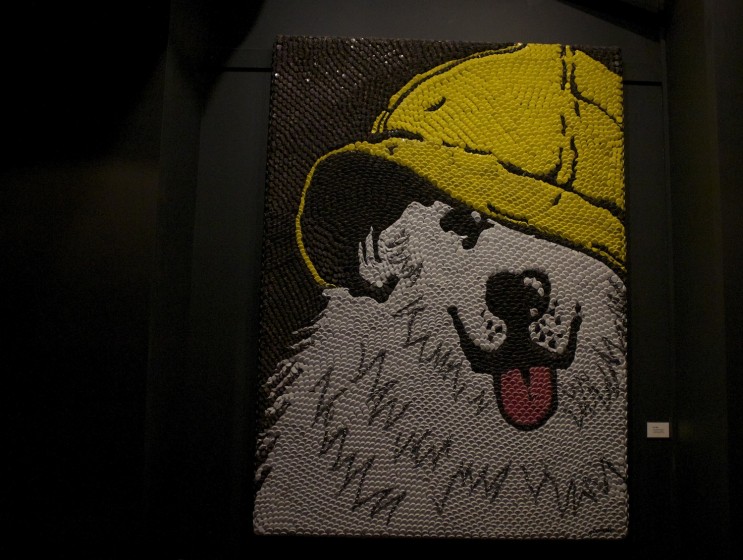 See below for brewery details like line-up, sampler info, and location.

I’ve had Sea Dog Brewing a few times during past journeys to the states. Sea Dog is a rapidly growing chain of restaurants with six locations in the Eastern states and two locations in Florida. The beer is brewed out of their Bangor location, then shipped to the restaurants. Their original brewery is located in Camden, ME.

Their mascot is the late ‘assistant brewer’, Barney, a pyrenees who had an uncharacteristic love of the sea.

We weren’t particularly interested in visiting Sea Dog Brewing, mostly because of its chain status. But when our random and cheap choice for accommodations brought us just five minutes from their South Portland location, we thought, why not?

The place was packed. PACKED! It was Maine Restaurant Week, and a Saturday night, but between the size of the space and the staff I got the sense that a full house was a regular occurrence.

We ordered a flight of beer – Ten 5 oz samples that covered every beer on tap except the brewers choice andCask-conditioned molasses red ale. Our server was awesome, though, and let us sample a small taste of the cask, too!

Sea Dog’s strength (in our opinion) is in their berry beer. Their blueberry was bursting with sweet berry scent, but wasn’t too sweet on the tongue, and the raspberry wheat was similarly palatable.

The beer as a whole wasn’t really our taste. The trouble with filtered beer on a sampler tray is that they all kind of taste pretty much the same. They heavily filter their selections. Many people like filtered beer. Not us.

The beauty of Sea Dog is how it brings together a cross section of people over beer. We spotted a whole range of groups, from an early 20’s girls night out, to late 30’s  bros night, to families (young kids in tow), to seniors – all drinking beer.

The atmosphere is akin to a Jack Astors or Boston Pizza – a definite sports bar feel in but with some cool, quirky décor mixed in. They have a mug club that gives you discounts on your beer. We were sitting next to a mug club member at the bar. From the looks of the mug walls at Sea Dog, he belongs to a large membership.