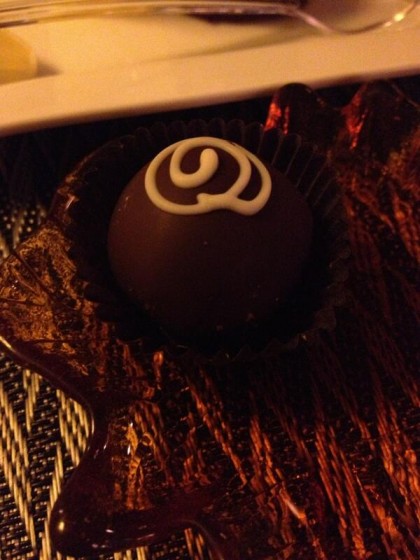 I visited the Schnitzel Parlour in Fredericton with strict instructions from the owners, “Do not eat before you come!!” The restaurant is owned by Uwe and Beate, a husband and wife team who moved to Fredericton 13 years ago from Frankfurt, Germany.

The restaurant is located about 15 minutes from downtown Fredericton, at the Silverwood Inn.  They serve authentic German food and royal chocolates with recipes that date back to their great grandparents, each with their own twist. You can smell the rich scents of cocoa and schnitzel before even entering the restaurant. Inside, the space is decorated with German mementos. There is a large flowered trellice and festive pixi-lit boughs line the doors and moldings, the restaurant cozy but poised for a party.

The Schnitzel Parlour is fancy without being stuffy. I’d feel just as comfortable on a romantic date as I would bringing my grandmother. We sat at the far end of the restaurant in a quiet corner lit by a pillar candle and dug into the menu.

The front page of the menu talks a little bit about the restaurant and its owners. there, I saw everything I needed to read to know I was going to enjoy my dinner experience. “We are taking pride in using local food sources. By doing so we are supporting real families.” They make their own German rye, spatzel (pasta) and salad dressing in house and everything else is hand selected and crafted from local food sources.  Uwe came over and took us through the menu then gave us some time to browse.

We started with a salad topped with their signature house made salad dressing, the perfect blend of salty and sweet. Next, we tried a small bowl of their goulash soup, a mix of tender bits of beef, garlic, chilli, sweet peppers and dark chocolate. The broth was rich and full of real flavours, not overly salted or masked with spice. For the third course, my sister Brittany tried the pork Schnitzel and I went with the salmon. Both dishes came with fiddle heads (which we topped with more house dressing), and what became my favourite item on the dinner menu – white chocolate mashed potatoes.

We enjoyed watching Uwe manage the dining room with the same care that goes into the food. Throughout the night he made his way from table to table, taking orders, asking questions, and making sure guests had everything they needed.

Uwe and Beate also own Fracklemans Truffle Shop, whose chocolates are fit for a queen – literally. In 2010, they made a special truffle for Queen Elizabeth called the Royal Frederictonian. These truffles were served to Queen Elizabeth for her Easter celebrations and later to Charles and Camilla during a visit to PEI. A few years ago, Uwe was watching the Queen on the news when he thought, “that woman deserves a really great chocolate.”

He wrote a letter to Buckingham Palace asking if he might send chocolates to the queen. He didn’t expect to hear back, but a short time later a letter arrived from Buckingham Palace. The letter said that they would be happy to accept a box of chocolates for the Queen, with a phone number and a time to phone the Palace to make arrangements.

I asked him how it felt to be in charge of making a chocolate for the queen. He made 110 options and picked the best 12. His selections were packed in a specialty box made of birch maple and sent to the palace under a strict set of instructions. “At one point it got lost,” he said. “It was a very stressful few hours, but eventually they arrived.”

The Royal Frederictonian chocolates were served for Easter at Buckingham Palace in 2010. The royals must have liked them because Uwe was once again invited to make his royal chocolates for Camilla and Charles during a visit to PEI.

In addition to being a chocolate lovers paradise, The Schnitzel Parlour is surprisingly allergy friendly. Because all of the food is hand selected from local farmers, and prepared from scratch each day, Uwe could tell us to the letter what was in each dish. They also have a house made gluten free bread which was served still warm from the oven, a very rare treat for me! Both my sister and I agreed that of all of the places we visited in Fredericton, Schnitzel Parlour was the stand-out. The food, attitude, atmosphere, and of course, the chocolate, left a big impression that we’ll not soon forget.