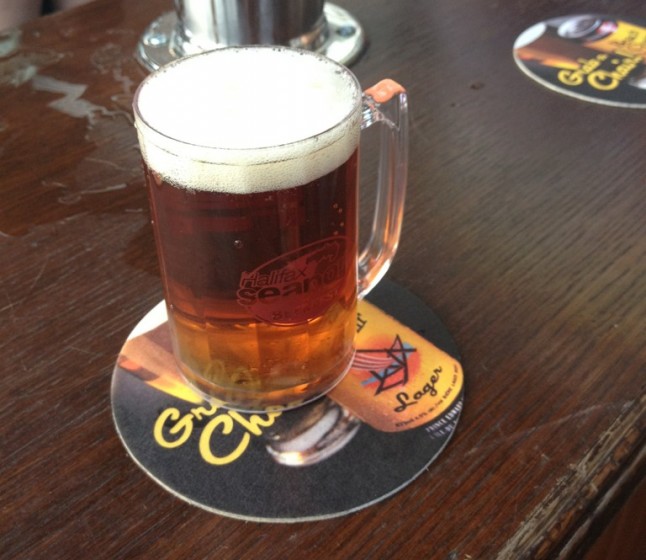 The Seaport BeerFest always does a great job of introducing me to new brands and styles of craft beer.  Last year, one of my favourite newbies was a little brew called Beach Chair. Beach Chair is brewed in Charlottetown at the PEI Brewing Company, and as it turns out, my love for the light summery local was shared. It launched at Liquor Commissions last summer on a Tuesday and had to be reloaded on Thursday, and again on Friday, and Saturday, and Sunday. The brewery has been gaining a following since it started as a brewpub, in 1997. The PEI Brewing Company (peibrewingcompany.com, @PEIBrew) was originally called the Murphy’s Brewing Company, named after the founder, Kevin Murphy.

In 2000, the brewery re-located to a new restaurant and brew pub called Gahan House.  At Gahan House, the beer continued to gain a following, so in 2008, an off-site location was established to produce take-home bottles of beer.

In 2011 Kevin Murphy partnered with another local entrepreneur, Jeff Squires, to once again re-brand the company. They re-named it The PEI Brewing Company, although you’ll still see and hear references to Gahan Beer. With this new partnership and new name came a new location and a new brewer. In February 2012, they opened a state of the art brewery on Kensington Street where the majority of their craft beer is now produced. We got a tour of the brewery by brewer Gord Slater on a recent trip to PEI. The tasting and shopping area is in a big, open room with comfy couches, a large tasting table, and a beautiful hand-carved bar with all of their beer on tap where you can have a glass or fill a growler. There is a large, soothing water wall and a cold fridge to pick up bottles to-go. but out back is where the real magic happens. “When we first got the building and it was empty we thought it was so big, but now we worry that we still won’t have enough space,” said Slater.

They do a lot in the new space, they brew, bottle, can and label their beer before shipping it around the island . Their beer also sells in Nova Scotia and new Brunswick and most recently, Alberta! The new space has the potential to produce 240 hectoliters or 48,000 bottles a week. They do a 60/40 split of bottles to kegs which means each year they can produce 12,000 HL in bottles and 8,000 HL in kegs. Future growth for PEI Brewing could lead to 3 times that amount! Slater tells us that PEI Brewing Company does still brew out of Gahan House.  They use this space to test out new brews and try innovative batches, like Mango Thai Wheat. Their regular line-up consists of five beer, 1772 IPA, Beach Chair Lager, Iron Bridge Brown Ale, Sir John A Honey Wheat, and Island Red Premium Red Ale . We also tried two of their seasonal ales while at the brewery, a Blueberry Ale and a Lobster Ale. The Blueberry was my favourite, light and refreshing, lots of blueberry taste, but not too sweet. The lobster ale was a Belgium style beer with just a hint of lobster, great for pairing with seafood on these hot summer days. We talked to Slater about the recent surge in craft beer, and how even the big guys like Moosehead and Molson are now launching their own craft breweries like Moosehead’s Barking Squirrel. “It’s been really great that Moosehead has introduced its customers to a craft beer. Craft brewers have been on the outside for a long time and Moosehead is bringing people into the fold.” He believes that those new “craft beer” consumers will also branch out into their local craft beer market ” Once you open the doors and introduce someone to craft ale, you can’t close them”

While we couldn’t find stats on craft beer sales in Canada, Slater says that last July craft beer sales were up 17% while traditional beer was down by 2%. He finds the market very promising “In the 80’s when the craft beer trend was getting started, it was brewery driven and now it’s consumer driven. Now, people visit the island and ask for a local option. They want to try something unique,” Slayter told us.

Unique is just what you’ll find at PEI brewing company, and Slater has big plans to mix things up even more. He plans to eventually produce a beer style that is unique to PEI. He has been boiling down some of the elements and is looking at doing an all island brew, possibly using seawater for the base.

Want to get a taste of PEI Brewing? They are available at many LC’s in New Brunswick, Prince Edward Island, Nova Scotia and Newfoundland. They were one of the brewers featured at Brewer’s Bash in Fredericton and they’ll be at this year’s Seaport Beer Fest on August 9th and 10th.