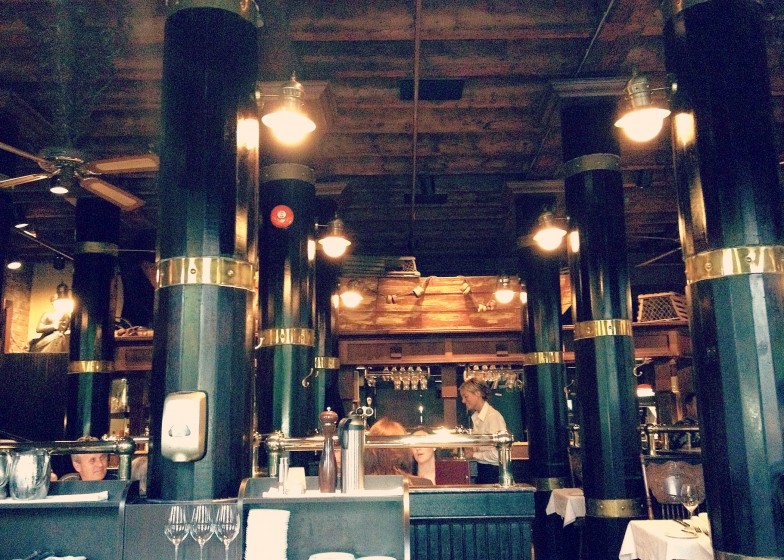 Five Fisherman (@5fishermen) is a mandatory stop if you are a tourist in Halifax.  So it comes as no surprise that my first experience took place during a visit from Drew’s Scottish side of the family.

The building has a lot of history. It was originally built in 1817 as a school house. It was later taken over by Anna Leonowens, who turned the building into an art school (what would later move and come to be known as NSCAD).  It was later purchased by the Snows and became a mortuary, one that was used to house many of the victims of the Titanic and the Halifax Explosion.  This might partially explain some of the ghost stories that are commonplace at the Five Fishermen.

The restaurant itself opened in 1975. It is split into two areas, the Restaurant and the Grill.  We dined upstairs in the restaurant area. It is dimly-lit, refined, has a lot of texture – brass, wood, and ornate glass.  The menu has a number of excellent seafood options, as well as a new prix fixe menu that replicates meals consumed on the Titanic.  Another great feature is the mussels bar.  With any main, you get access to all you can eat mussels with a selection of dipping sauces.  The bar is also stocked with a variety of salads, pates and other treats.

We chose the Five Fish and the Shellfish Linguini.  We finished with the Crème Brule Sophia, made with caramelized peaches, custard cream and candied ruby red grapefruit, served with pistachio biscotti.  We both preferred my meal (the Five Fish) but if I went again I would probably choose the prix fixe.  The pricing in general is expensive but the prix fixe came with the mussel bar, appetizer, main and a dessert for only $7 more than just my main.  It also looked really, really good.

There are, of course, many places in Halifax to enjoy equally tasty seafood at prices that suit more modest budgets.  However, if you’re looking for a night out to mark a special occasion, entertaining visiting friends and family or having a business dinner, the atmosphere, ghost stories and mussel bar at the Five Fishermen make it worthwhile to shell out a little extra.