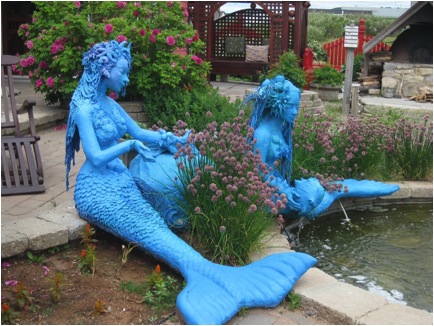 I didn’t know les Îles-de-la-Madeleine (Magdalen Islands) existed until a few weeks before we set out to visit them. My friend Mike and I were in the same boat this summer: low on funds but wanting to explore a new place. Luckily we live in the Maritimes, surrounded by beautiful spots. He’d heard that les Îles make for a cheap, awesome trip.

There are two boat routes to get to les Îles: a cruise from Montreal, and a ferry from Souris, PEI. We spent the day in PEI, grabbed the 2:00am ferry, and woke up in les Îles. A friend drove us to the ferry.  There is no cab or public transportation in Souris so relying on the kindness of friends or strangers is your only option.

It was cool and foggy when we arrived in Cap-aux-Meules, the city centre of les Îles, at 7:00am. We groggily wandered into town, and with the guidance of some construction workers, found a cab number and got to our hotel.

The view from our hotel was stunning – coastline and ocean. We stayed at the Chateau Madelinot, just outside of downtown Cap-aux-Meules, and steps from a beach.

Îles-de-la-Madeleine is comprised of eight tiny islands, located just north of PEI, and a part of Quebec. We were surprised to find so much development on les Îles. There was a hospital, a college, schools, fast food joints, a Tim Hortons (Hallelujah!), and a movie theatre. We were also surprised that about 13,000 people live on les Îles, but in the summer, the population quadruples!

We spent most of the first day walking around an island called Havre-aux-Maisons, which was accessible by cab. True to its name, the island was peppered with brightly-coloured houses.

We made some adorable canine friends while wandering around Havre-aux-Maisons.  On les Iles, that’s about it for wildlife.  Due to its ultra-remote location and a few wooded areas, the largest land animal on the islands is a fox.  There are also very few bugs in the air, because of the frequent strong winds.  Hiking the ‘woods’ in the mornings with no fear of large animals, and sitting on our deck in the evenings with almost no mosquitoes suited this city girl juuust fine.

Large crosses atop hills are common, like this one in Havre-aux-Maisons. The crosses overlook the tiny villages, and light up at night.

Statues of the Virgin Mary are also common, like this one overlooking the harbour in L’Étang-du-Nord.

While in Havre-aux-Maisons we visited art galleries. The gallery pictured above was particularly quirky.  Les Îles have a great arts scene with many galleries, live music, a traveling circus, and street theatre.

An interesting and somewhat hilarious fun fact is that les Îles have a sort of mascot named Tante Emma.  Played by a local, Tante Emma is the “ambassador” for les Îles, sharing history with visitors.

There were many beautiful harbours in les Îles, but I loved the Acadian flag at this one in L’Étang-du-Nord. The people of les Îles are called Madelinots. Les Îles are inhabited mostly by Acadians, but two islands (Île-d’Entrée and Grosse-Île) house predominantly English-speaking Scottish and English descendants.

The Acadian Madelinot culture is subtly distinct from other Acadians, because the Madelinots were exempt from the Acadian expulsion. It’s an interesting mix of Quebecois and Atlantic Canadian.

One disappointment was that I’d assumed les Îles would have classic French food, but it was more Maritimes-style.

We did, however, find a local fromagerie (cheeserie; otherwise known as Heaven) and tasty boulangerie (bakery). We had fresh seafood from a cafeteria called La Factrie, which had a Maritime lobster supper feel, and was delicious.  They served cretons (a spread made of unidentified pigs parts), which is common in Quebec. Mike got serious points for trying the cretons after I explained what it was. Another popular condiment was caramel dip. It was everywhere!

Mike’s thirsty interest in microbreweries led us to find a local microbrasserie called Microbrasserie A L’abri de la Tempete.  It had some tasty brews (which Mike wouldn’t let me drink cold—la de da).  Something to add to Canadian beer enthusiasts’ must-try lists!

The second day, after lazing on the beach, we visited Havre-Aubert, which we deemed the ‘hipster’ part of les Îles. It was kitschy, with many young people.  Pictured above is a gallery that makes art entirely out of sand.

Later Mike convinced me to go kayaking. I’m not one for sporty activities, but I’m SO glad we went. We kayaked through natural caves in the ocean, which were red like in PEI. It was beautiful. It didn’t hurt that our kayak guide, Maxime, was also beautiful. He was around our age, and told us about moving from Montreal to les Îles. Mike and I listened in awe, drifting into our own bucolic daydreams of how neat it’d be to do that.

We left les Îles the following morning. We had become such friends with Normande, our cab driver, that it was almost sad to say goodbye. I think it was more sad for me and he was mostly weirded out, but still.

We had a great view of Île-d’Entrée (pictured above) from the ferry. Only 120 people live on the island, accessible by boat or air. We were awed by how different it would be to live in such isolation, which is a captivating part of les Îles.

Mike and I agreed two and a half days was too short a stay. It was a truly special place.