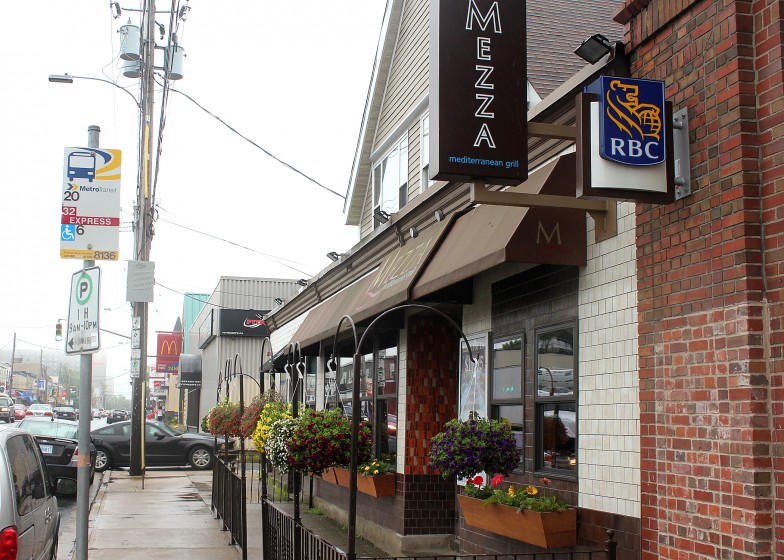 Or: The Route of Bests

So far we’ve covered four routes, the #15, the #60, the #21 and the #80 that will take you in four completely different directions in HRM.  So, for our fifth #LocalTravelHRM post on @hfxtransit bus routes, we decided to cover one of the urban core routes, the #6.

For us, this route isn’t so much the best route, as it’s the route of many things that we consider to be the best.  From beer to diners to sushi to movies, this route has so much greatness packed into such a short distance that you’re almost better off walking to see everything.  However, if you ever want to come back to your favourites, the #6 will get you there.

We begin this route at the Ferry Terminal by Stayner’s Wharf.  If you’re coming from Dartmouth, you can check the ferry schedule here, and the schedule for the #6.  Cyclists, the distances indicated follow the route up Cogswell until it turns into Quinpool.  There are no bike lanes and a lot of traffic along this route, with a couple crazy intersections so be aware of drivers.

Get off either just before or after the Staples and head for the giant Propeller and the “Cold Beer” sign.  Propeller Beer (@propellerbeer) is the darling of North End craft beer lovers, and with good reason.  Their Pilsner is one of my favourite summer beers and their Bitter is good for all seasons.  If you like it hoppy, go for the IPA.  They do $9 refillable Growlers (just shy of a 6-pack!).

My wife spent most of her adolescent life at Centennial Pool, first as a competitive synchornized swimmer, and later as a coach.  While she will tell you it isn’t the best pool in the city, it is her favourite.  Not only is it one of only two 50 meter pools in the city, it is the only 10 meter diving tower complex in Nova Scotia.  It is also home to some great groups: Halifax Aqua Nova Synchro, Cygnus Diving Club, The Halifax Trojans, and many more. The best part?  During recent renovations, Centennial decided to add solar panels to the roof to provide part of the building’s electrical needs.

In the middle of Halifax’s urban core is a big (mostly) green space called the Halifax Common (thanks to @christinacopp for the correction: singular, not plural, and for the link: Halifax Common).  Here’s the thing about having a space for the common use, you can’t please everyone all the time.  But in my opinion, HRM really isn’t doing too bad a job here (now that we’re done with the concerts).  Whether you’re coming here to play baseball, tennis or Ultimate, skating the skate park or skating the Oval, playing on the playground, lounging on the grass or chilling in the pool, there really is something here that could appeal to everyone.

Also in the middle of the Commons is the Pavilion (@halifaxpavilion), Halifax’s famed all-ages club that succeeded the legendary Café Olé.  If you’re a punk band in Halifax, this is where you prove yourself.

Given how easy it is to stream movies online, there’s a reason why Video Difference (@videodifference) has survived.  Video Difference has an incredible selection of films.  In fact, they even have an incredible selection of selections of films.  The store is well marked throughout its three levels, documentary lovers will be in heaven.  Open 24 hours and they have drop-off locations throughout the city.

Freeman’s (@freemanspizza) tops several “Best ” lists.  It is the best place to do some people watching while being the best place for late night snacks on Quinpool while enjoying a sampler tray of the best selection of Propeller draft outside of Propeller Brewery itself.  They have gluten-free pizza options and are now doing all local weekly specials!

This sweet addition to the Halifax dining scene offers over 60 kinds of cheesecake, including gluten free and dairy free selections.  You can opt for take-out, or relax in their lounge, which is decked out with pink high back velvet chairs, chandeliers, and a photo booth complete with long gloves and cat-eye glasses.  We went with Sweet Hereafter (@sweet_hereafter) for our wedding cake and people are still talking about it.

This family owned restaurant makes some of the healthiest, freshest slices in the city.  In addition to offering gluten and dairy free options, Bramoso (@bramosopizza) uses almost all local ingredients for their pizza.  They also have a wicked take-and-bake option.  While take and bake is always available, your best bet is to pick it up at the market on Saturdays ($15 for a large).  While you’re there, you can try their Saturday morning special – breakfast pizza made with veggies, bacon, and a free range egg.

The Trail Shop (@trailshop) was another member of the Quinpool business community that played a big part in our wedding.  If you’re looking to do some camping, kayaking, hiking or slacklining, this is the place for you.  The staff are very knowledgeable and friendly and they have tons of information in the store for hiking and kayaking adventures throughout Nova Scotia.

As much as Quinpool has to offer, it always felt like something was missing.  And then Leicester’s came along.  Every good neighbourhood needs a good deli and cheese emporium.  We’ll let our friend at ourhalifax.com tell you what’s good here.

2012 marks the 75th anniversary for this cinematic gem.  Transport yourself back to the 1960’s while taking in the newest independent flick.  In addition to offering some of the more unique screenings, The Oxford (@empiretheatres) also plays host to a number of midnight fundraiser showings, usually ones involving costumes.

We’ve already covered the fact that Wasabi House (@wasabihouse) is our favourite sushi spot in Halifax.  You can see it here.  If you want some Japanese culture with your sushi, head down just a couple more doors to the Ikebana Shop (@theikebanashop).  Ikebana is the Japanese art of flower arrangement.  They are THE place to go for unique, beautiful vases.  You can learn to use these vases during one of their workshops, or, if you’d rather someone else do your floral arranging, they also offer arrangement services. They have an awesome gallery of past corporate arrangements that they have done.  Even if you aren’t into flowers, check out their shop for unique gifts and home goods.

Argue if you want to, K.O.D. (@kingofdonair) on Quinpool has the best pizza deal in the city.  Note that I’m from New Glasgow and I don’t hold Halifax pizza to the same standard as Pictou County Pizza.  Where else can you get a large pizza with three toppings for $9?  Two things to know, this deal is for pick-up only, and is best if you get pepperoni, bacon and sausage.

The Ardmore (@ArdmoreTeaRoom) is something of an institution among greasy spoons in Halifax.  Rarely will you not find a line of hungover (or not yet hungover) university students leading to a packed house on a weekend morning here.  There’s good reason for that.  Though many say the breakfast aren’t what they used to be (are they ever?), their home fries are still pretty awesome (it’s the seasoning).

While I was doing this route, I got caught in a torrential downpour and sought refuge in the Ardmore.  I couldn’t resist warming up with a hot turkey sandwich ($8.49).  It was well worth it; a huge plate of turkey, bread, gravy, veggies, fries and cole slaw.  However, if you can hold out, you’re only a few stops from what we consider to be the best diner in the city.

Quinpool is the kind of walkable, livable neighbourhood we love, one where you can find anything.  In case you doubt this, you should pop into Planet Organic and the Taishan Asian Grocery.  It doesn’t matter how obscure or exotic your culinary, domestic or personal hygiene needs are, you’ll be well looked after here.

Planet Organic (@planetorganic) has everything to satisfy your natural, organic, gluten-free or vegan needs.  They also have a wide range of vitamins, supplements and natural hygiene and beauty products.

The Taishan Asian Grocery is legit.  No prices on anything, I can’t read any of the labels and I don’t even know what most of these things are.  I don’t even know if this is the right website for it (based on the phone number I’m thinking it could be).  Simply buying something here is an adventure, let alone cooking it.  The dumplings are top notch.

Ordinarily, Horseshoe Park at the bottom of Quinpool is a great place to lie out, reading a book or basking in the sun.  Not on the day I was out though.  It’s a small, well-kept park along the Northwest Arm with a great view of the passing sailboats.  Since I couldn’t really suntan, I contented myself with some duck-watching.

Finally, you’ve reached our favourite diner and the closest thing we have to a neighbourhood local.  It’s really not fit how much time we spend at the Armview (@armview), but who can blame us?  They have the best smoked meat & rye sandwich east of Montreal and their breakfast burritos with guacamole are amazing.  You can enjoy the casual lounge atmosphere inside (Sunday nights are open mic) or enjoy the view of the Northwest Arm from their patio.

It’s really pretty overwhelming how many great places are packed into such a short distance.  It’s easy to understand why we think Quinpool is one of the best streets in the city.  We barely scratched the surface, especially when it comes to places to eat.  If you feel like we’re missing something that must be included, let us know!