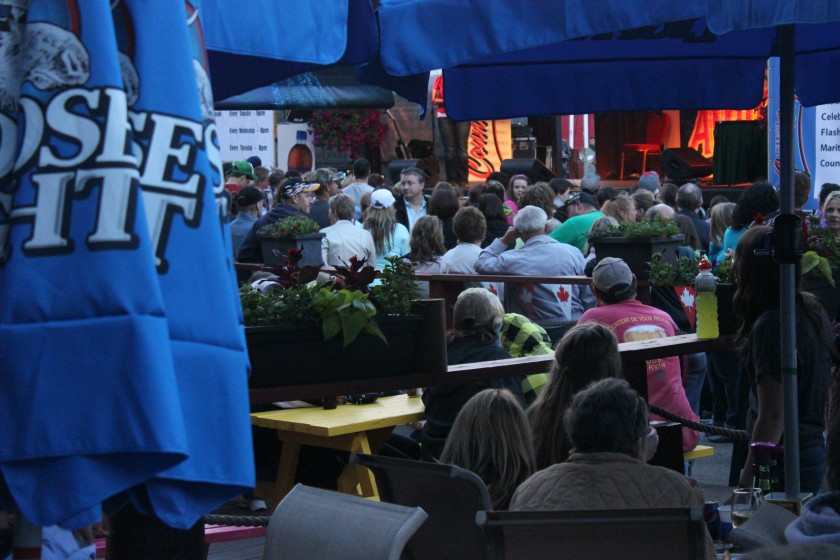 On a road trip to New York City, we planned to take a pit stop in Saint John.  Our friend Josh of @trinitygoldns is a master at researching must-try places, and found the Saint John spot featured on TV’s You Gotta Eat Here: the Saint John Ale House.  We figured we couldn’t go wrong and made our way there.

The initial drive into Saint John wasn’t all that impressive , until we hit downtown. There is definitely something happening in this port city.  There was a huge crowd of people checking out a singing competition while others walked the boardwalk, played beach volleyball or enjoyed drinks on the various patios.

We made our way through the crowd into the Saint John Ale House (@SJAH_NB).  It was pretty dark inside but there were two long lines of draught taps and a large booth perfect for our party of five.

We made a snap decision on which of our group would take on the first couple legs of driving.  Those who won out on this draw grabbed a pint each of the impressive list of Nova Scotia and New Brunswick craft beer.

I opted for the Picaroon (@picaroons) Seasonal, a summer organic wheat, Igor went with their Dark & Stormy and Josh went with the special Moosehead Cask-conditioned Ale.  Made from all natural ingredients, no added preservative, no extra carbonation, it only lasts four days and the cask gets tapped Thursday.  Perfect since we were passing through on a Thursday!

Our decision was heavily supported by twitter recommendations strongly urging us to try the Ale House for the Moosehead Cask-conditioned Ale from @dispositif and @benwedge.  Great minds think alike!

Next we dove into their menu.  We made sure everyone tried something different to fit in as many flavours as possible.  I couldn’t resist the buttermilk fried chicken, while Gillian got the mussels.  Our friends got the steak melt sandwich, the Bahn Mi pulled pork sandwich and the cheese burger.  Of the five, the burger was surprisingly the weak link.  That said, it would’ve topped many other menus at restaurants we’ve visited, saying something for the quality of the other dishes.  No matter what you get, make sure you get the spicy Asian mayo.  So good!

Our server, Andrew, was a really good sport about everything, especially with having cameras and phones shoved in his face.  He gave us great menu suggestions and wasn’t afraid to ham it up a little bit for the camera.

Update: We recently returned to Saint John Ale House, and were pleased to learn that they now offer flights of beer. They also carry some of the growing local craft beer options on-tap, including Hammond River Brewing.