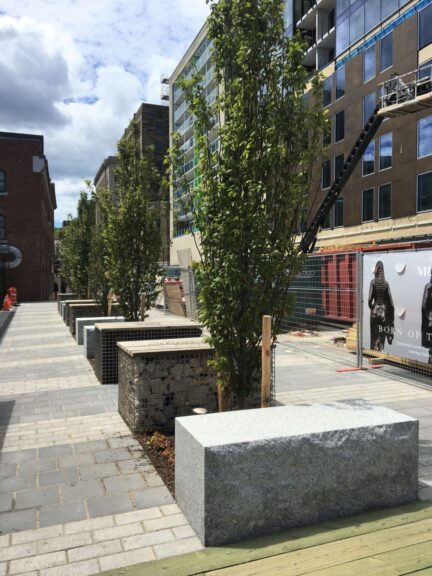 Ever since the Queen’s Marque development on the Halifax Waterfront was announced, some scamps on Twitter have been trash talking the project. Other voices said, wait and see, this thing is going to offer Library Level quality and excitement. The project is still under construction, but I’ve visited the edges of the site a couple of times this summer, and here is an interim report of things I noticed.

What a relief to have Water Street back after the dreary construction period. It feels like a little urban miracle has been accomplished. All new are: on-street parking, a protected bike lane, and a wide sidewalk separated from truck traffic. And the glass does a good job of reflecting what there is to reflect. 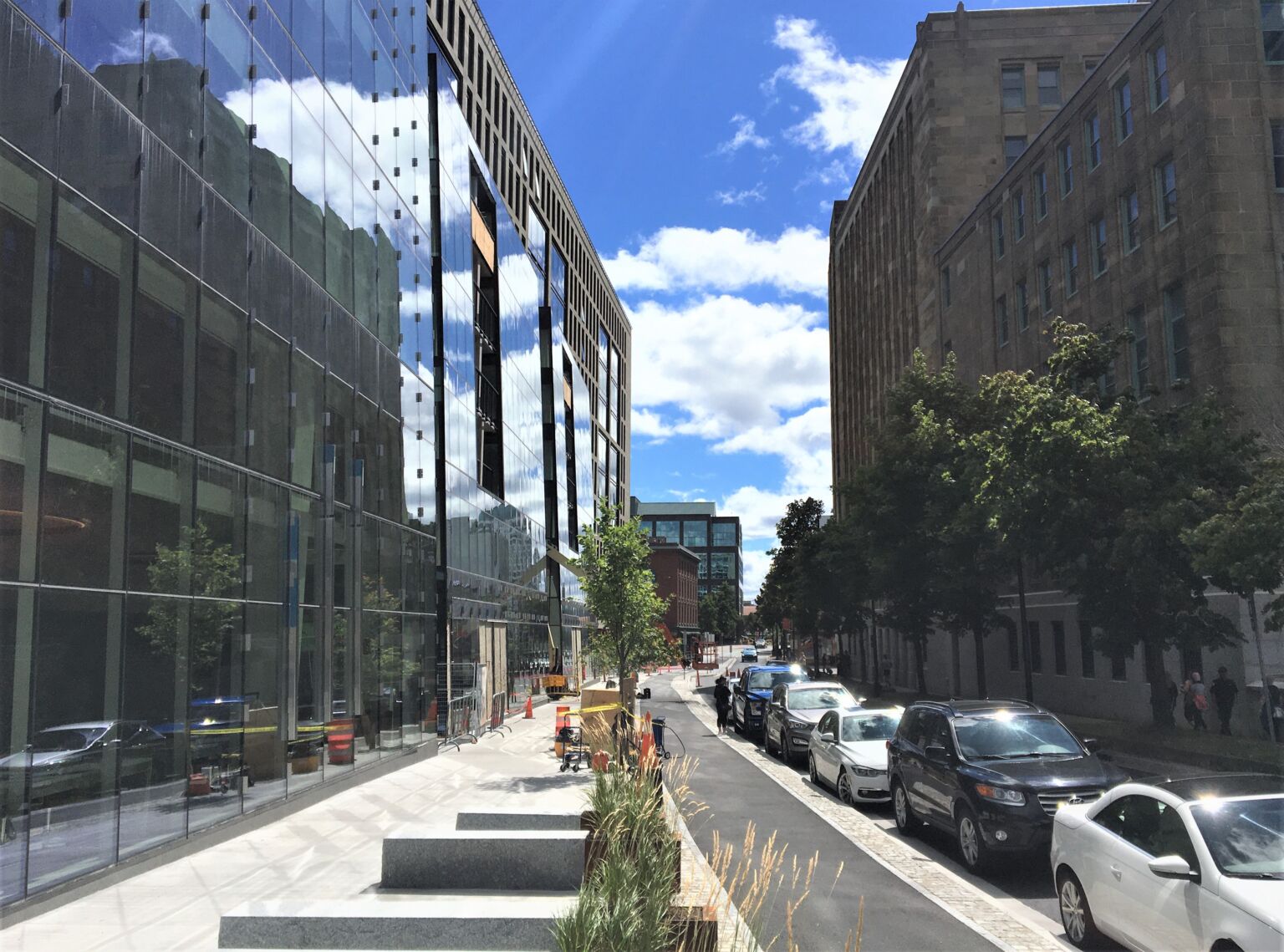 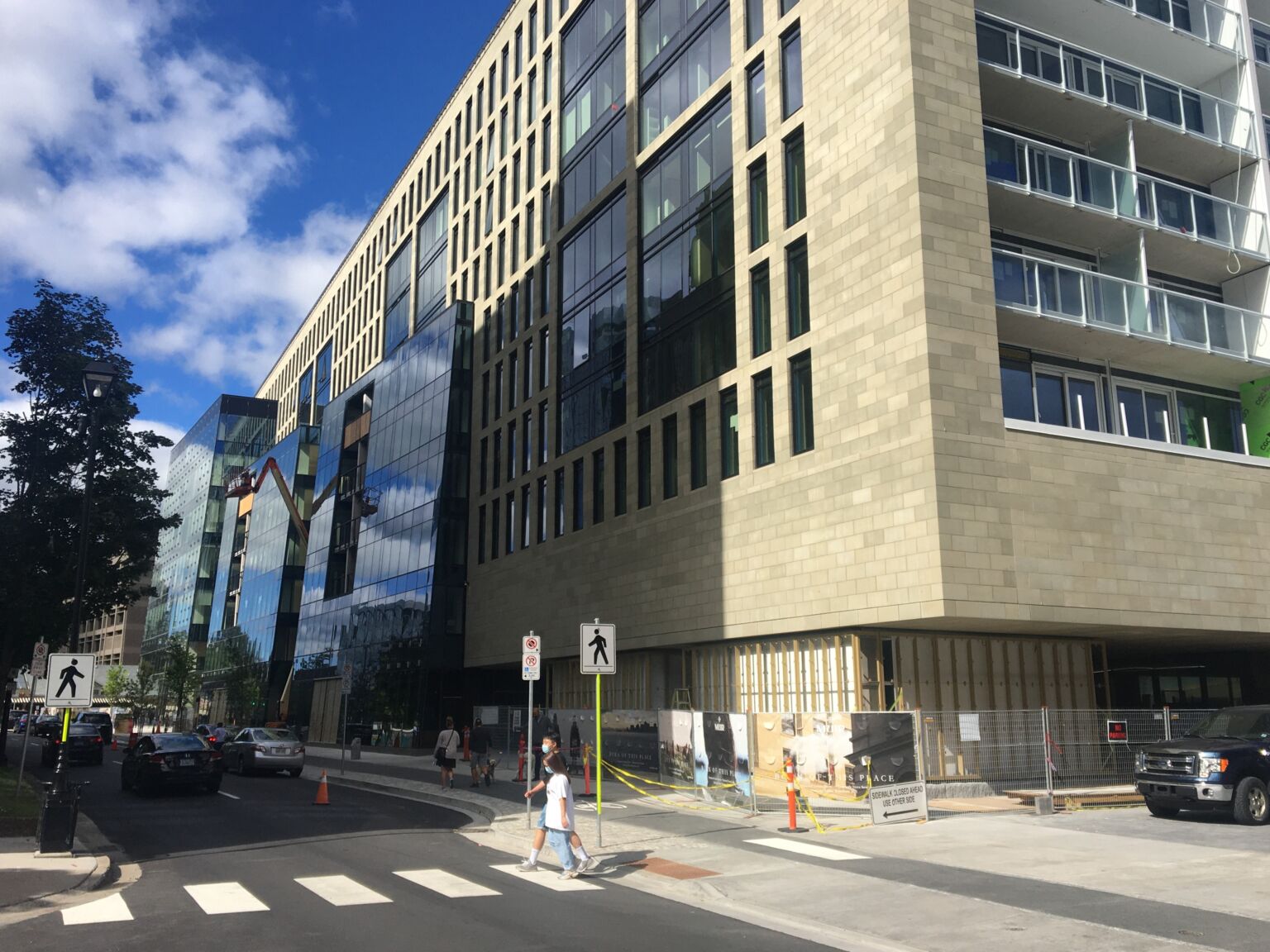 Where the pedestrian area broadens at the north end of the project there are granite blocks for seating, attached to corten steel planters sprouting clumps of decorative grass. Sweet. 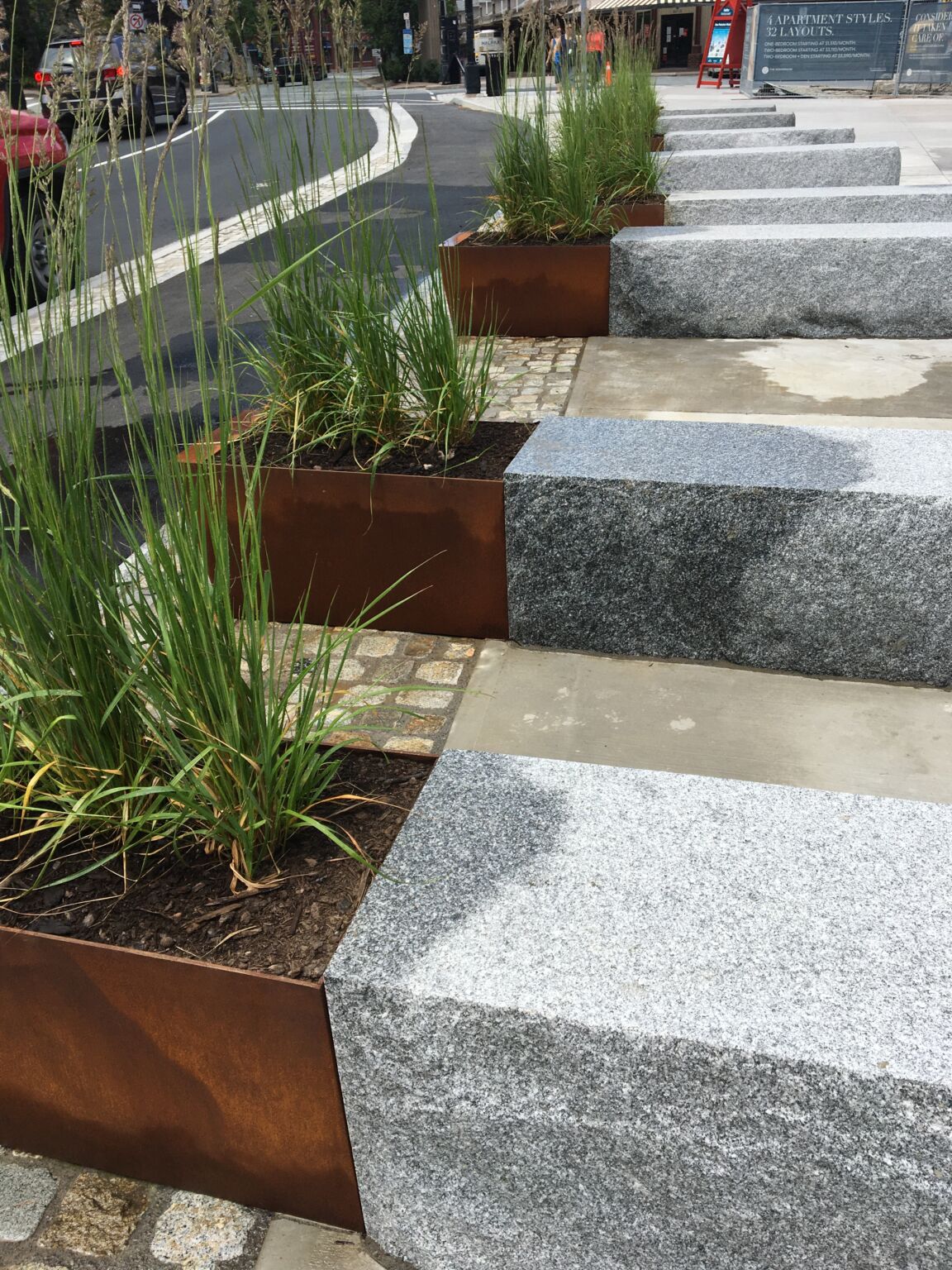 Prince Street extends visually to the water and the space feels generous. 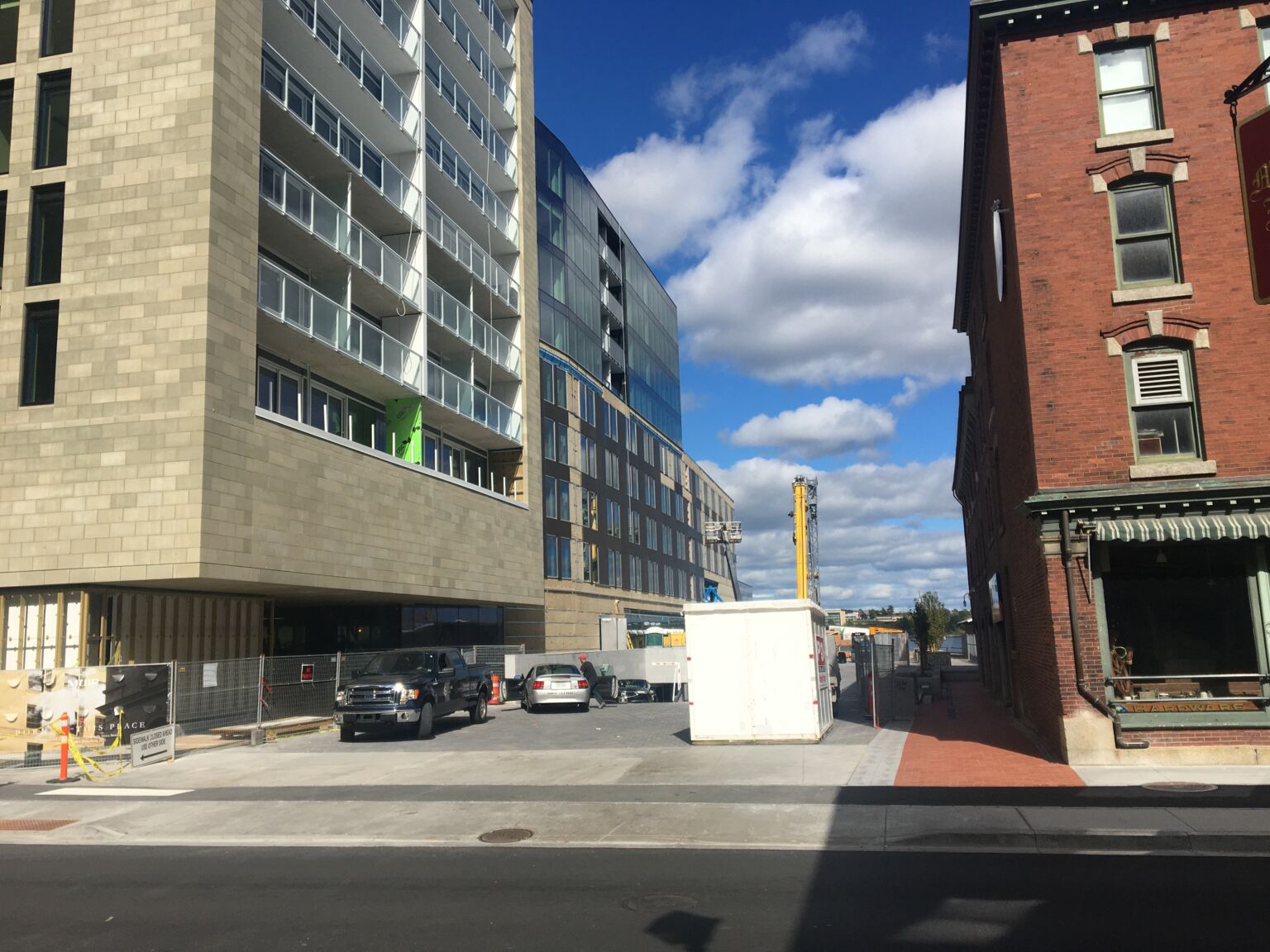 Looking up Prince Street, the Wallace sandstone cladding of the Marque visually connects it to the Dominion Building and the Bank of Nova Scotia, both built of the same material. The new building is, wisely, elevated. The change in elevation from the 19th-century Robertson Building, next door, is elegantly handled with a series of granite planters and steps. 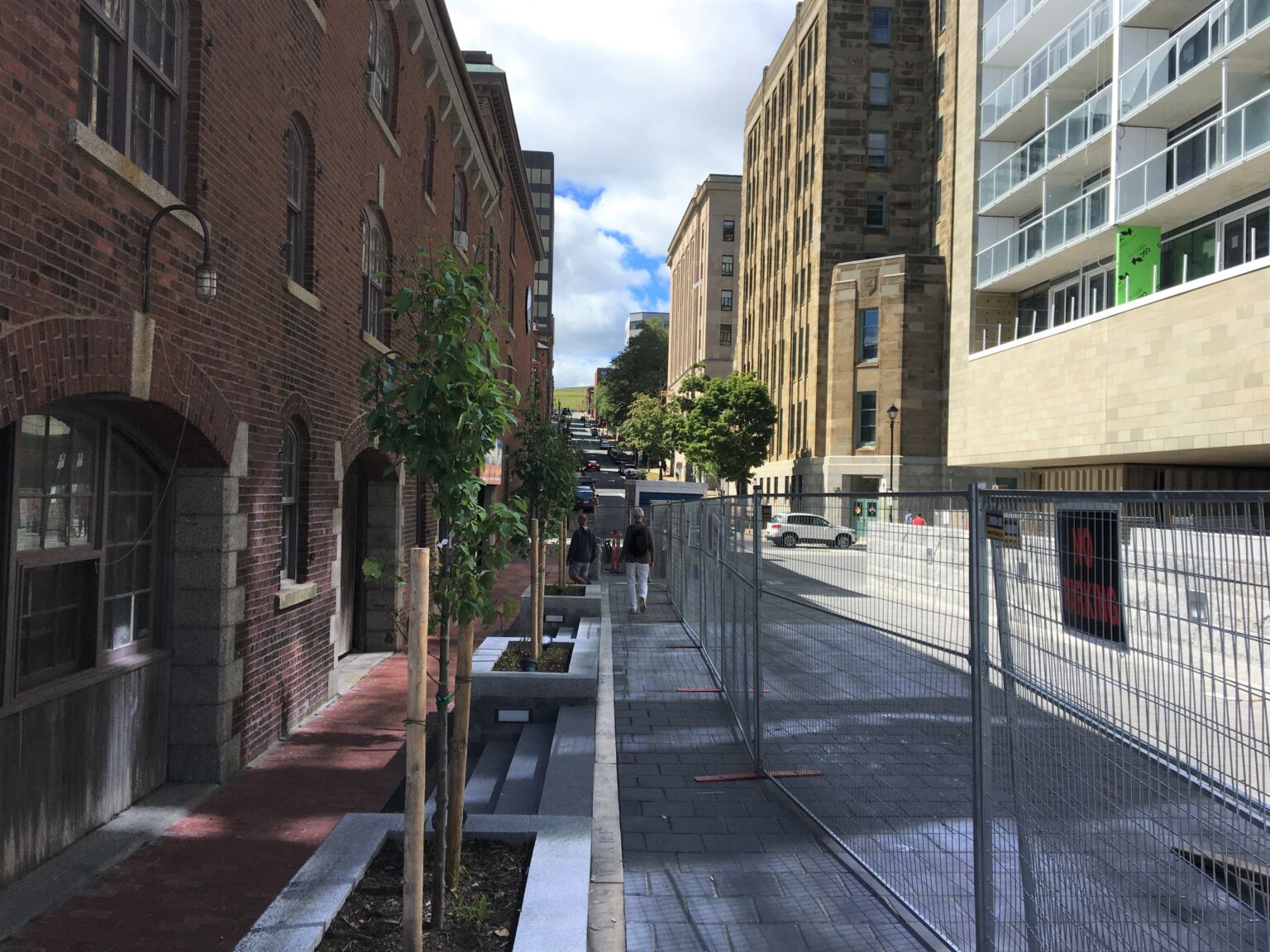 Guaranteed to get my approval is this evocation of the granite boundary markers used by the British military to mark their properties (this was one). Here is my post about these markers. 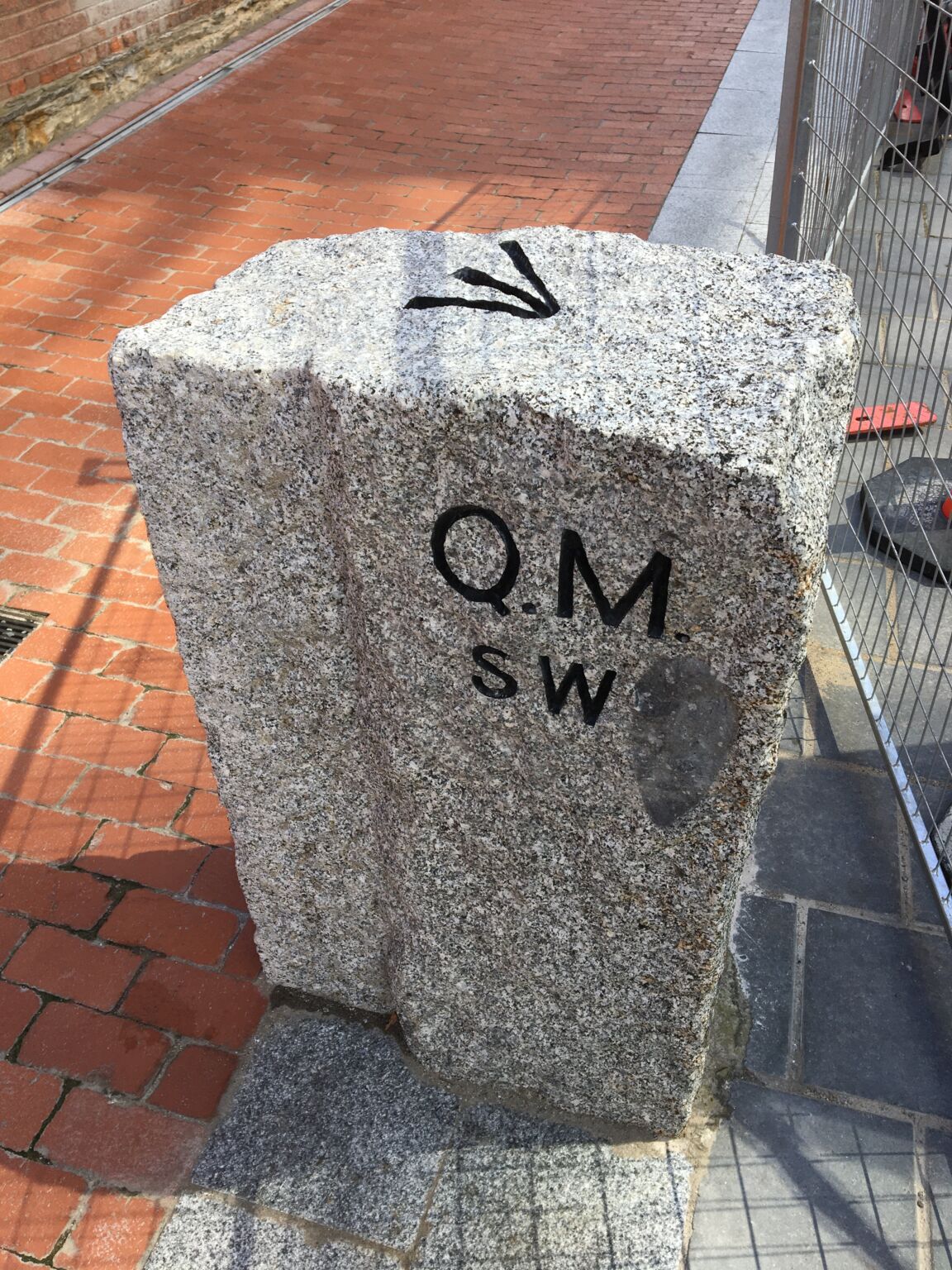 Strip lighting set into the walkway next to the Robertson Building is evidence of a serious lighting scheme. It should provide dramatic illumination of the old brick, and very slim people for Instagram. 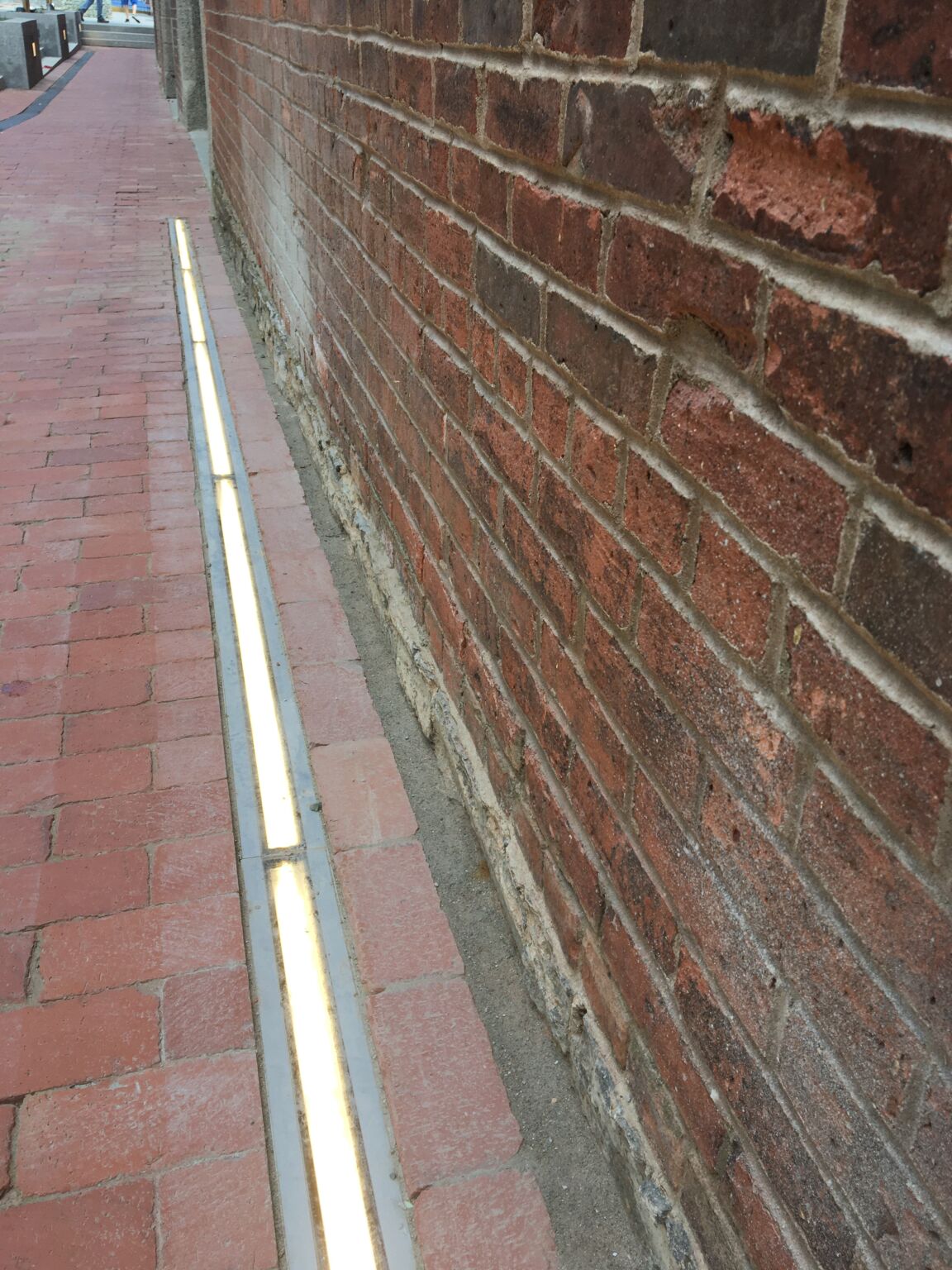 Tenants are beginning to move into some parts of the project, including the region’s largest law firm. Stewart McKelvey has a striking entrance sign, covered with pictograms that I couldn’t immediately decipher. The whale fluke is reminiscent of the “rubber stamp” that was used in the log book of whaling ships to record the number of whales slaughtered each day, but I’m sure that’s not what it references here. 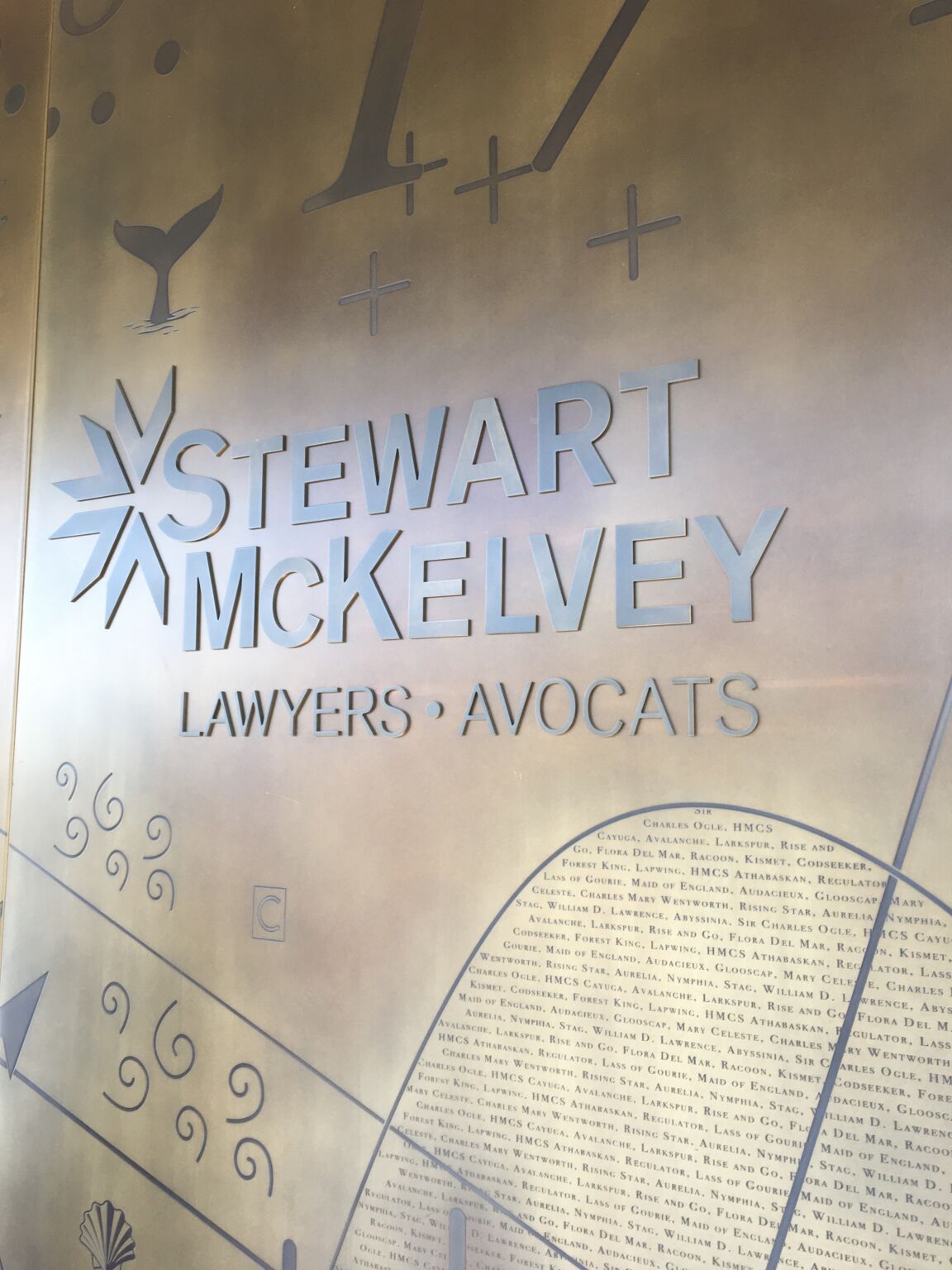 Appropriately for lawyer’s offices, the intro panel has a section of small print. On closer examination, it is a list of ships with Nova Scotian connections. Some are familiar, like Mary Celeste, others not so much, like HMCS Racoon, an armed yacht sunk by a U-boat in the St. Lawrence River in 1942. 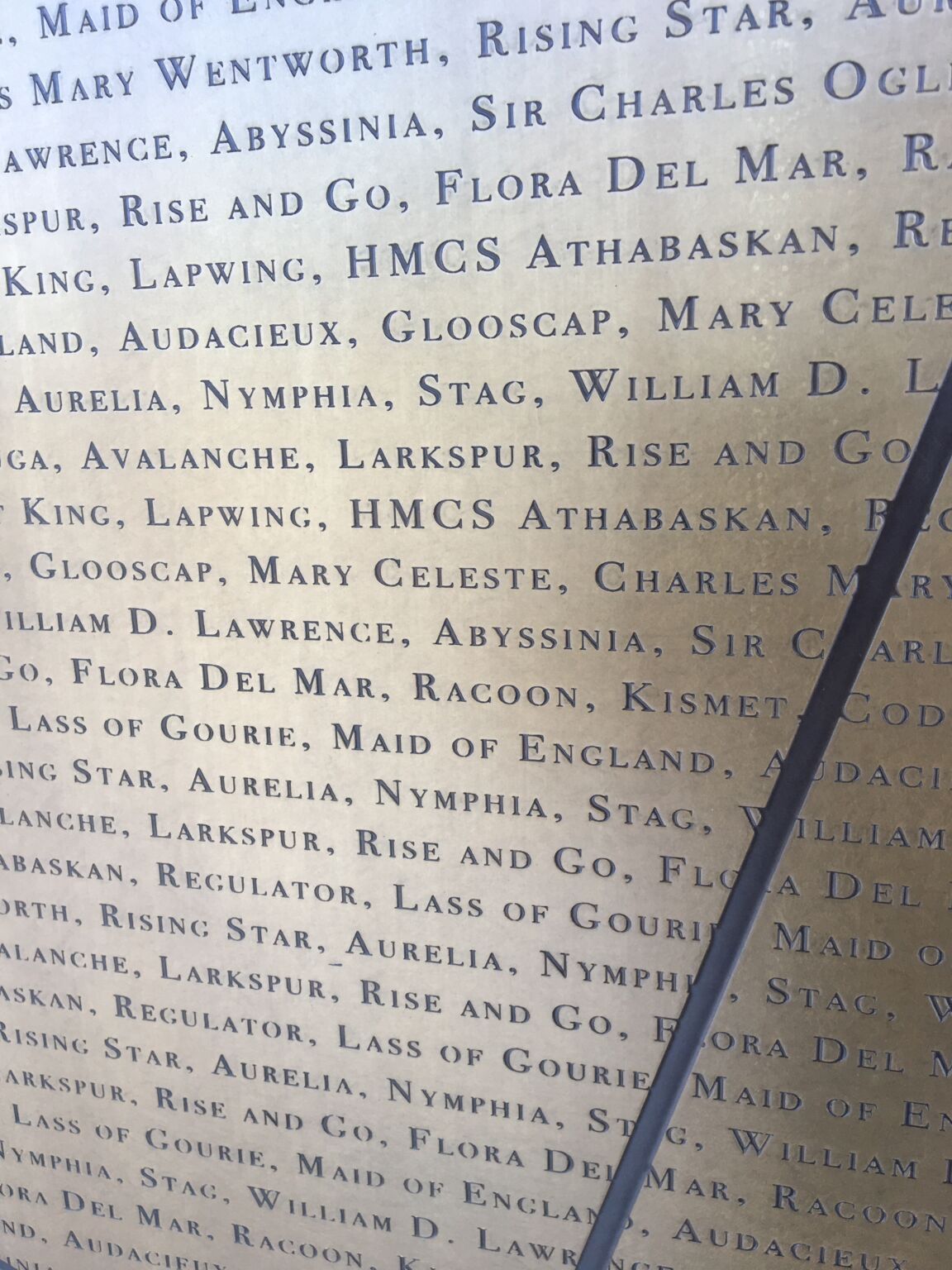 If only history would stop changing.

I was surprised when the name chosen for the project was the Queen’s Marque. Letters of Marque were the documents issued by governments to privateers, in time of war, that gave them permission to capture vessels and property that belonged to the enemy. Today, one person’s freedom fighter turns out to be another person’s terrorist. In the 18th and early 19th century, a letter of marque was how you could tell a privateer from a pirate.

During our wars with the United States, privateers attacked and sometimes looted communities all along our coast; think places like Canso, Lunenburg, Liverpool, and Parrsboro. Imagine a crew from Blackwater, or Halliburton, or the Taliban suddenly appearing in your town. Lots of reasons to be afraid. I might have called the project Queen’s Wharf because that is the name of the wharf it is built on.

Along the north side of the property are a row of well-crafted seats, designed to look like stylized shipping crates. Each crate is marked with a destination where Nova Scotia shipped goods. I really don’t know this history, but I suspect most of these destinations were receiving our salt cod as a cheap food to feed enslaved (or formally enslaved) people, who worked on rice plantations in the Carolinas or raked salt in the blistering sun of the Caicos. 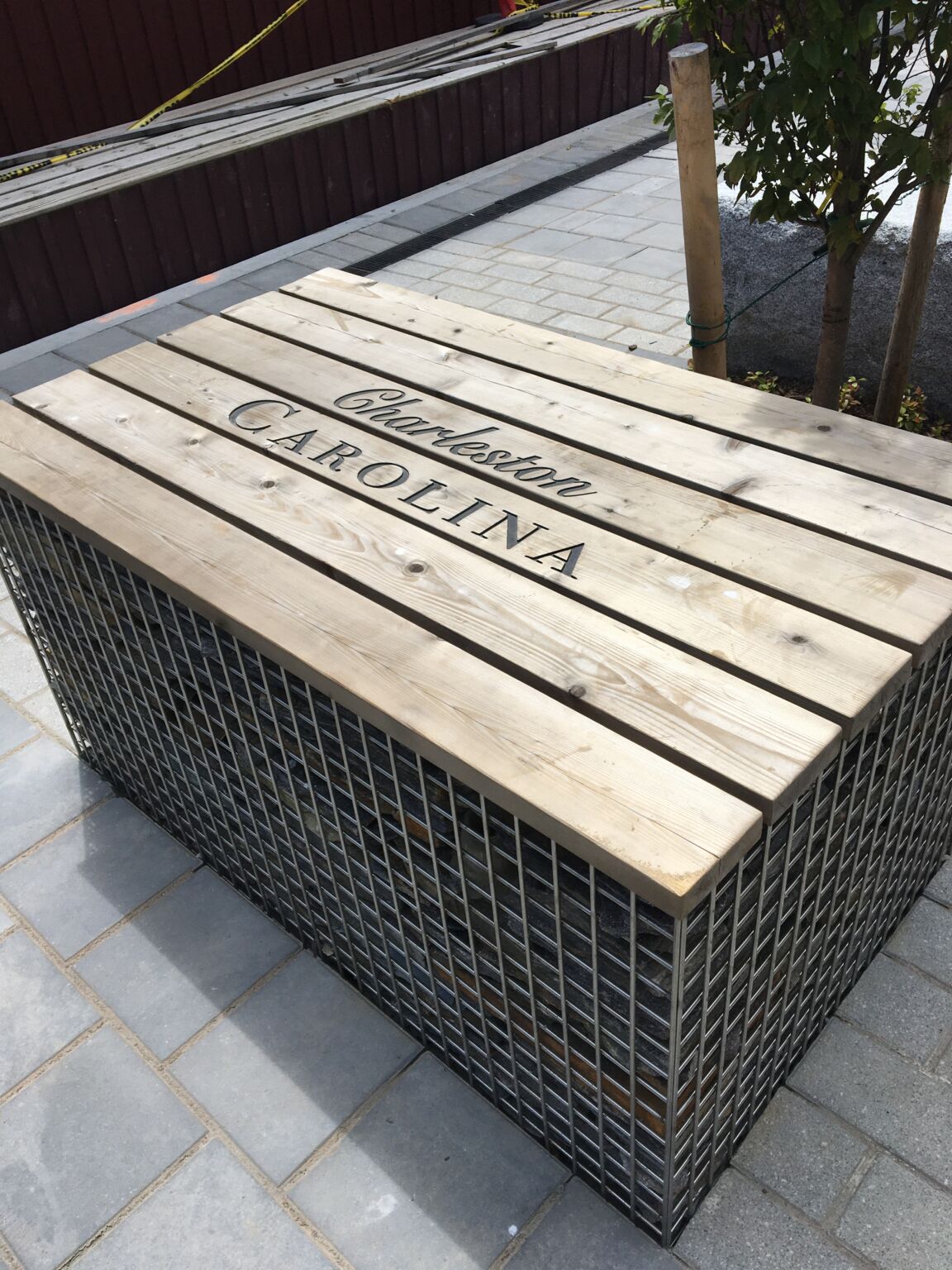 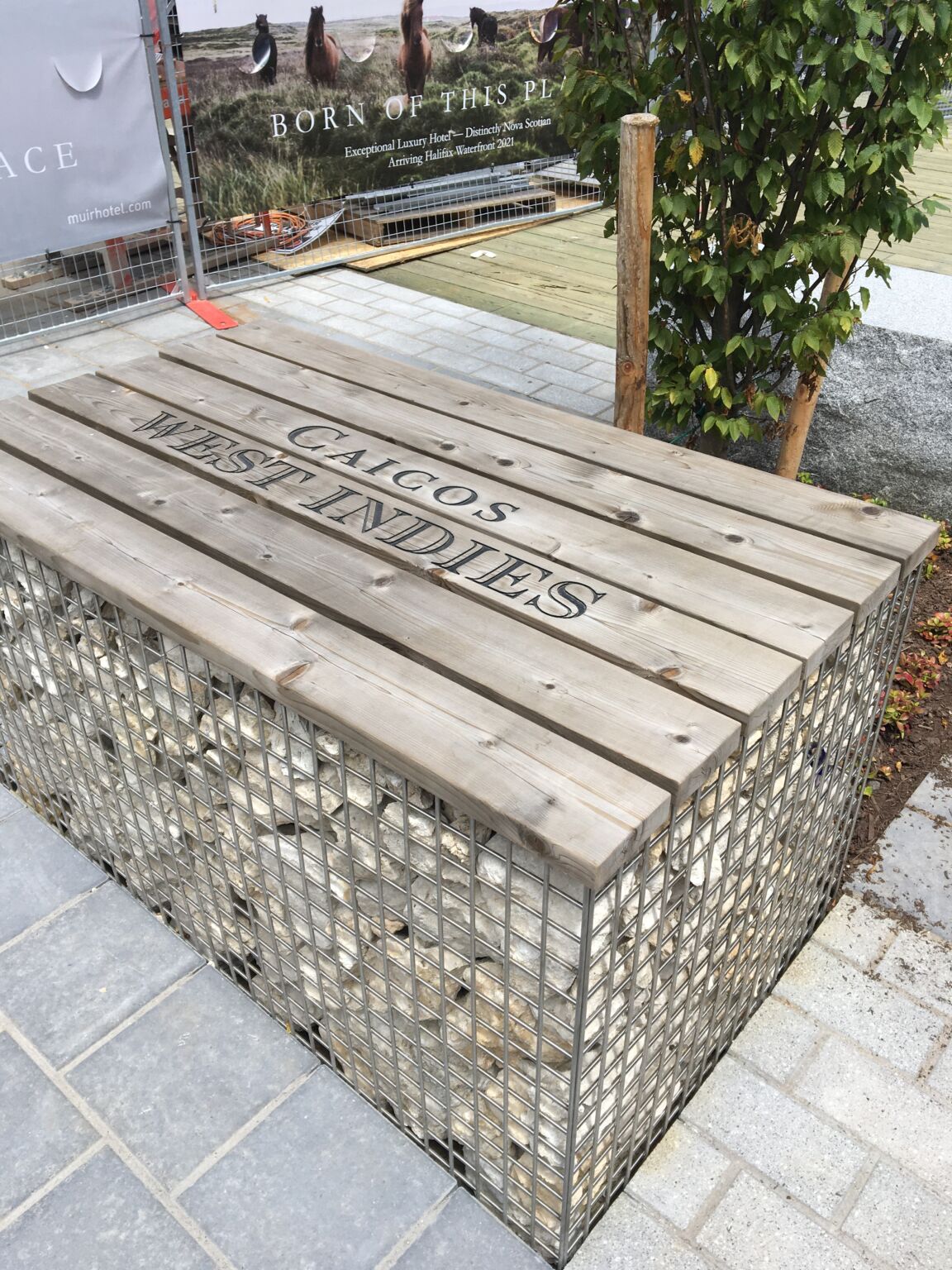 Good for the neighbours

The Queen’s Marque has really allowed the Robertson Building of the Maritime Museum to breath. The sidewalk in front of the shop used to be single lane with a post and chain barrier so you didn’t accidentally step in front of a container truck. Now there is a normal sidewalk plus the bike lane! 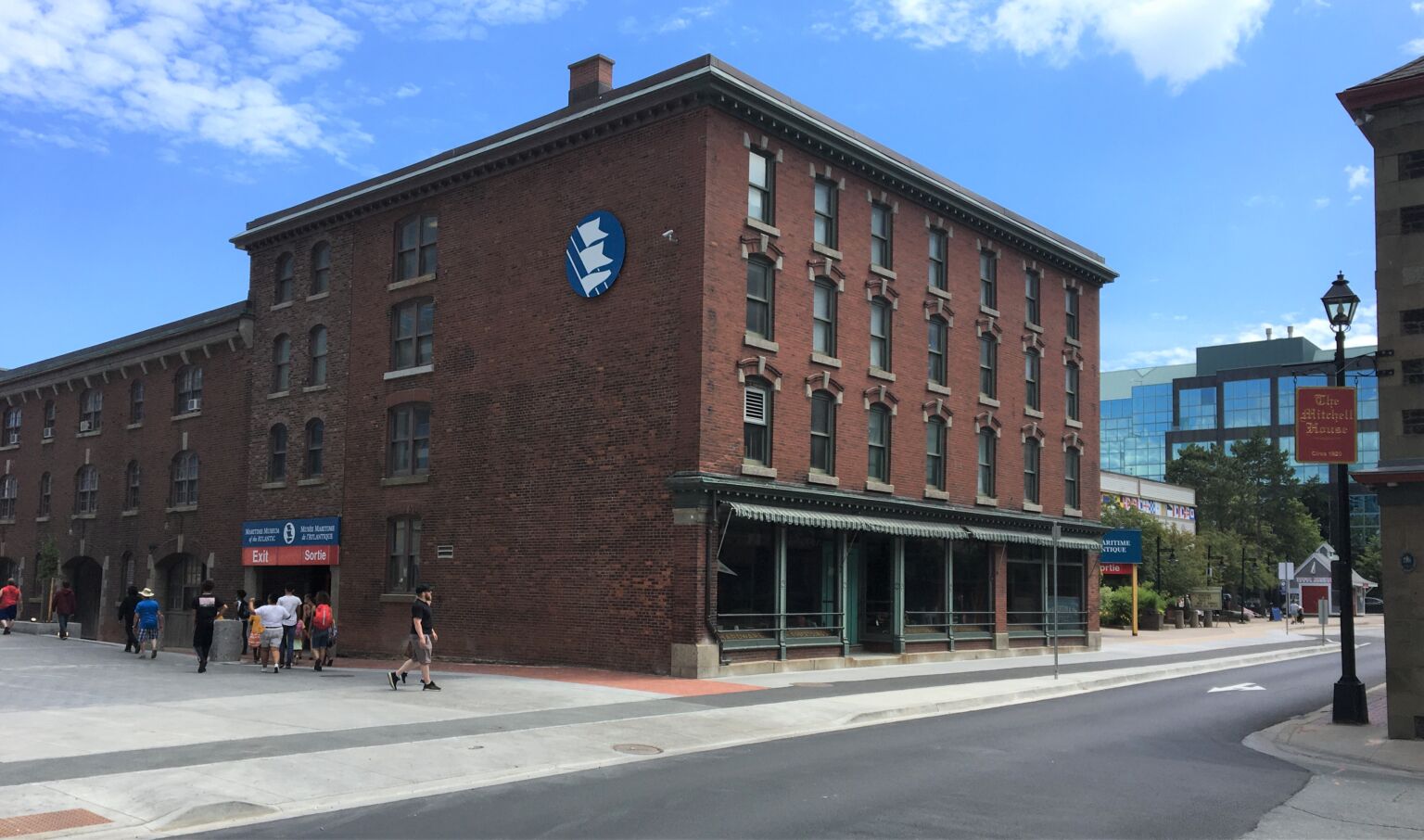 I don’t know what is happening to the north side of the project but the jagged concrete remnant of the Cable Wharf Building will surely be going. 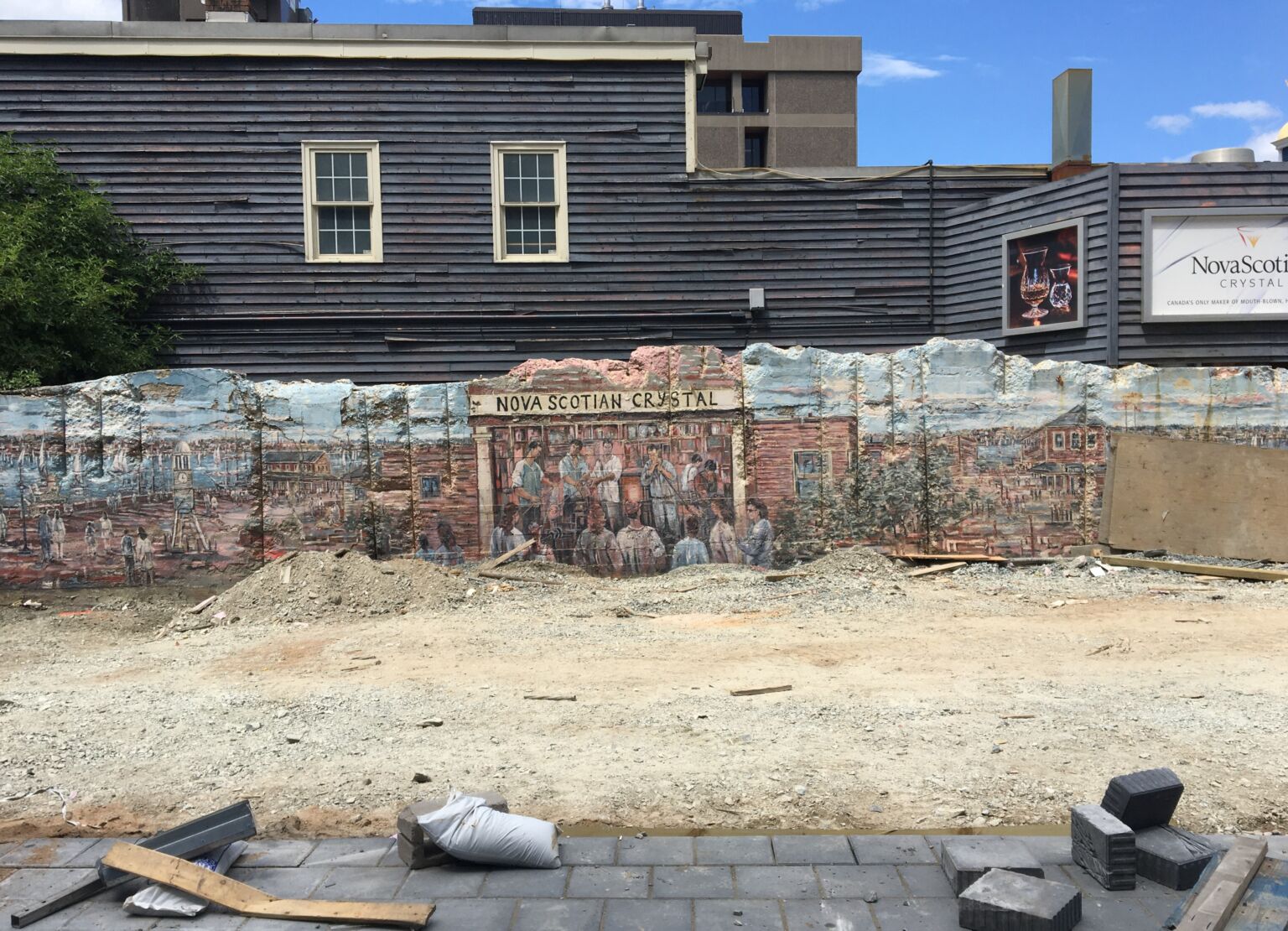 What about the soft chewy centre?

What we are really waiting to see are the public courtyard, and covered walkways of the Marque, but those appear to still be a ways off. I’m looking forward to climbing the giant ramp, that should afford panoramic views. I liked how the ramp frames Georges Island. 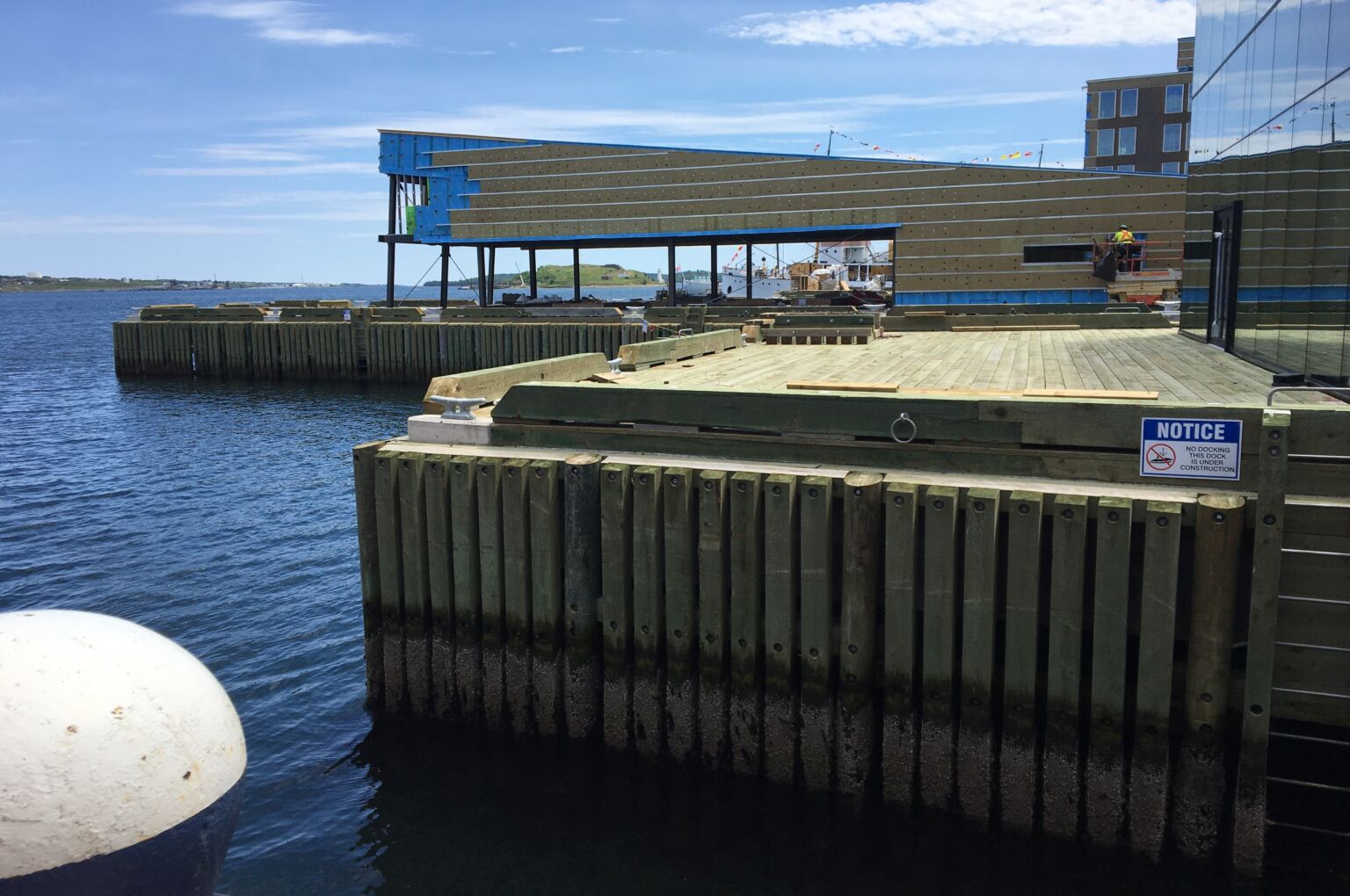 If you want to follow the progress of this part of the project, and check lighting conditions at different times of day, there is a webcam with more or less this view.

Having problems conjuring up memories of what the site used to look like? Most recently there was a surface parking lot, beautifully styled by Develop Nova Scotia. 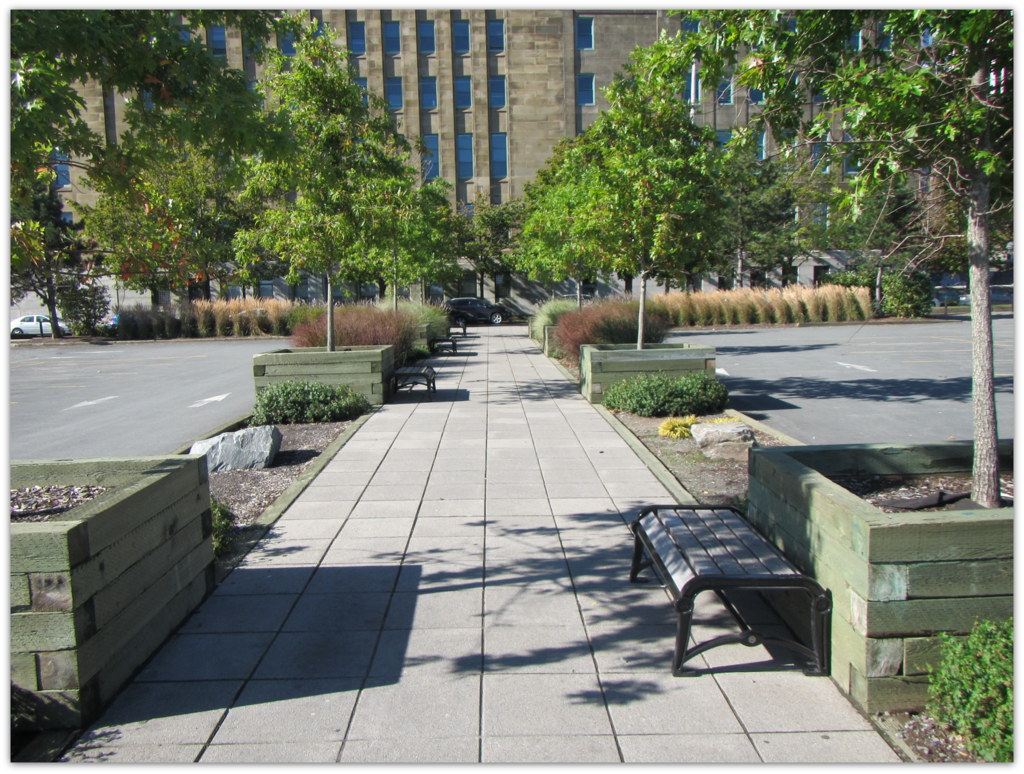 For decades the site was covered by a warren of buildings occupied by Federal folks doing fisheries research. In this c1980 photo, that is all the beige buildings to the right.

On August 31st, Sheila and I had our wedding anniversary lunch at Bicycle Thief (41, thank you very much) and then walked to The Queen’s Marque along the water’s edge. When we got married, I was helping to plan the Maritime Museum and this whole area was a wasteland. Since that time, one of the enduring design principles of the Waterfront Development Corporation (Develop Nova Scotia) is to ensure views to the harbour at all of the down streets.

From the water’s edge I snapped pictures of each of the streets along the way. This hasn’t been possible since the 18th century. And never have there been trees, because Edward Cornwallis cut them all down in 1749. 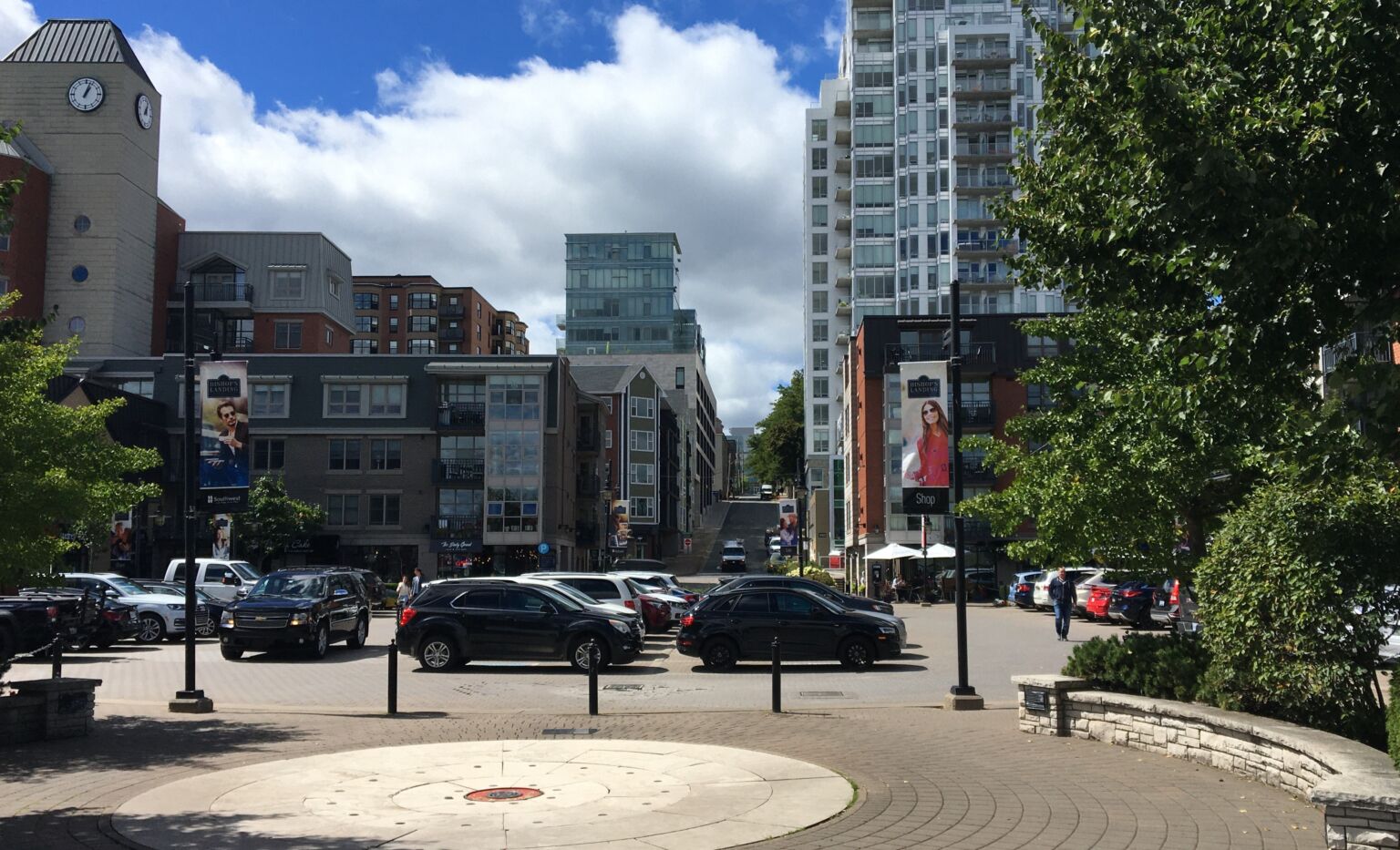 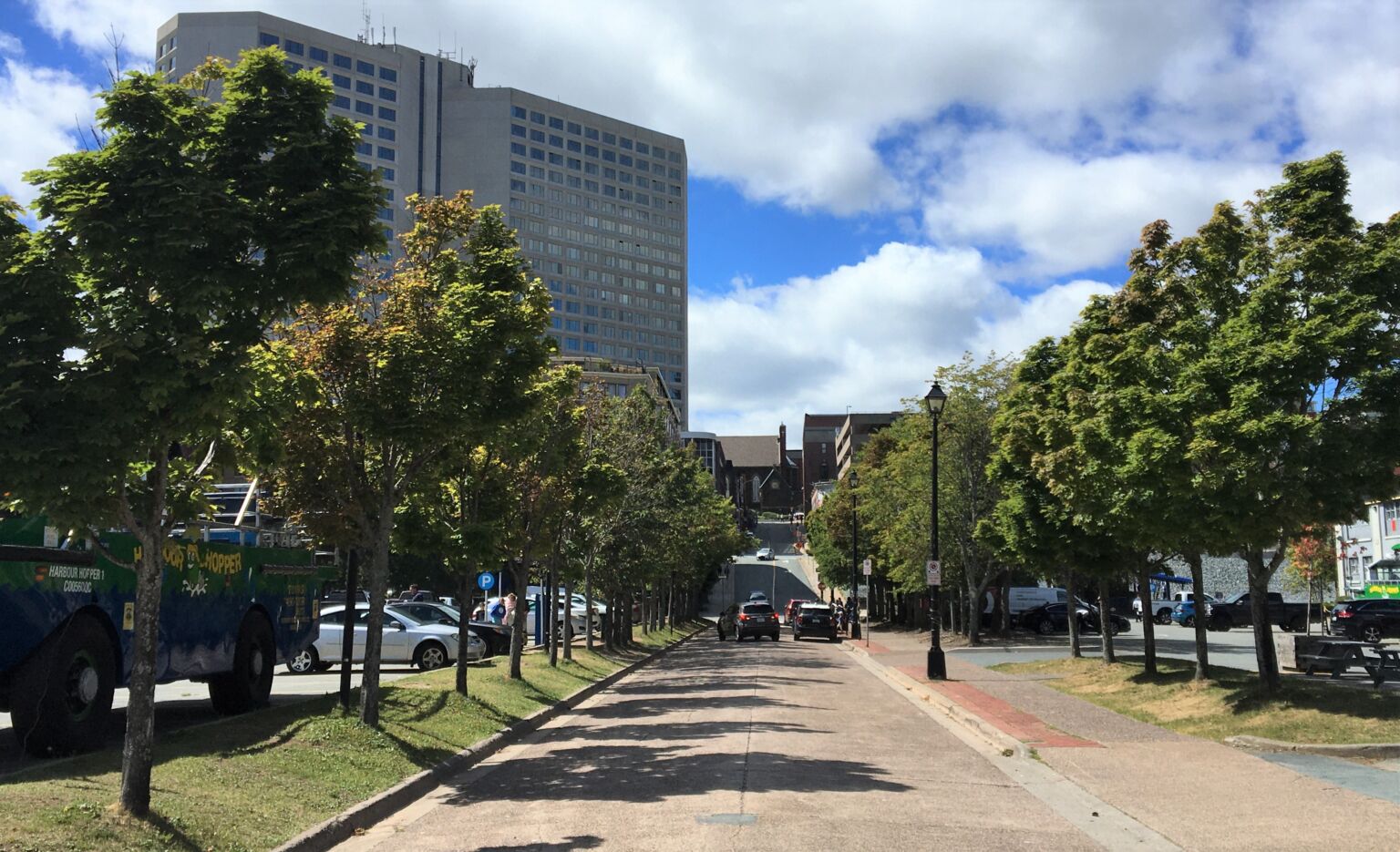 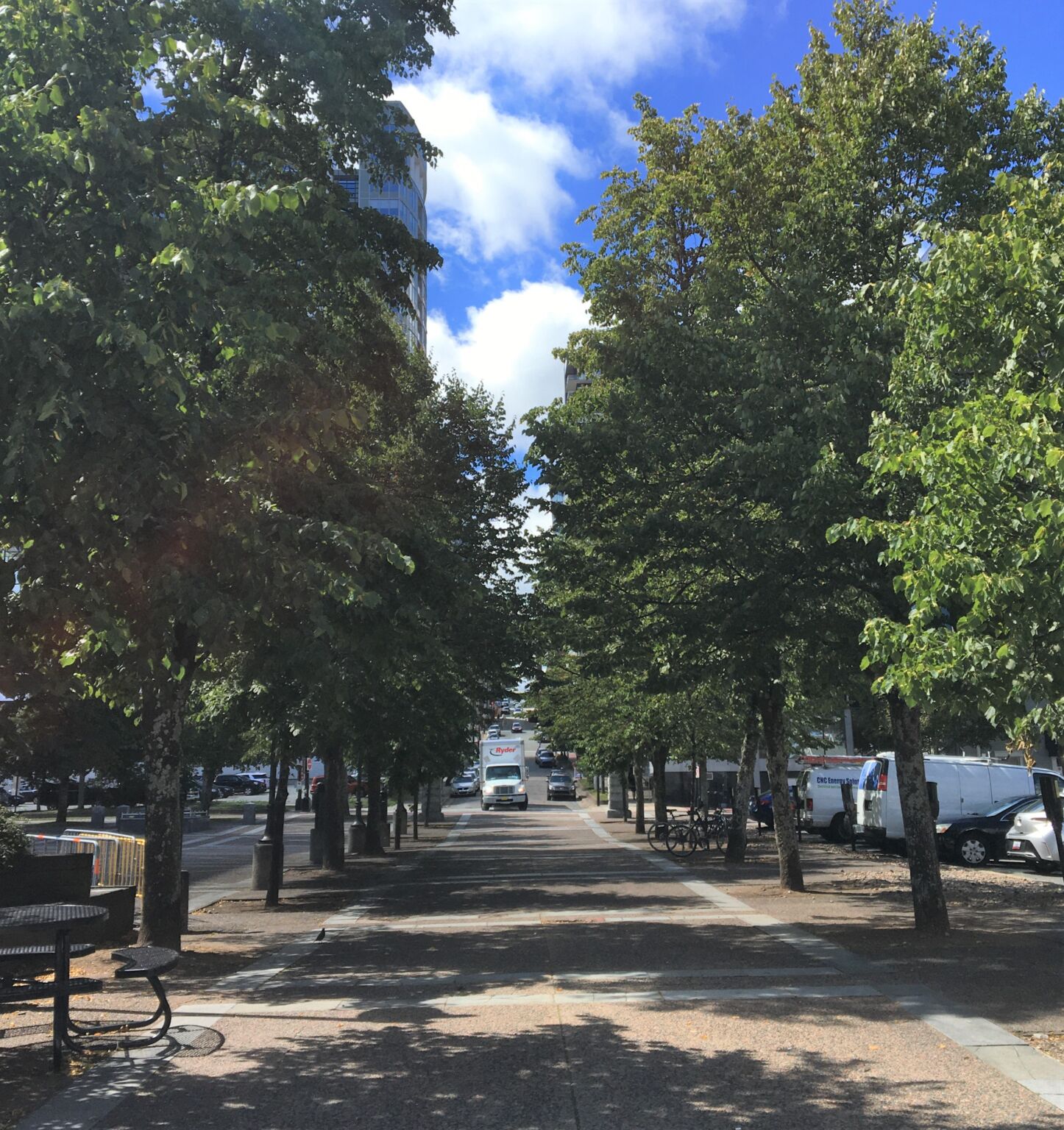 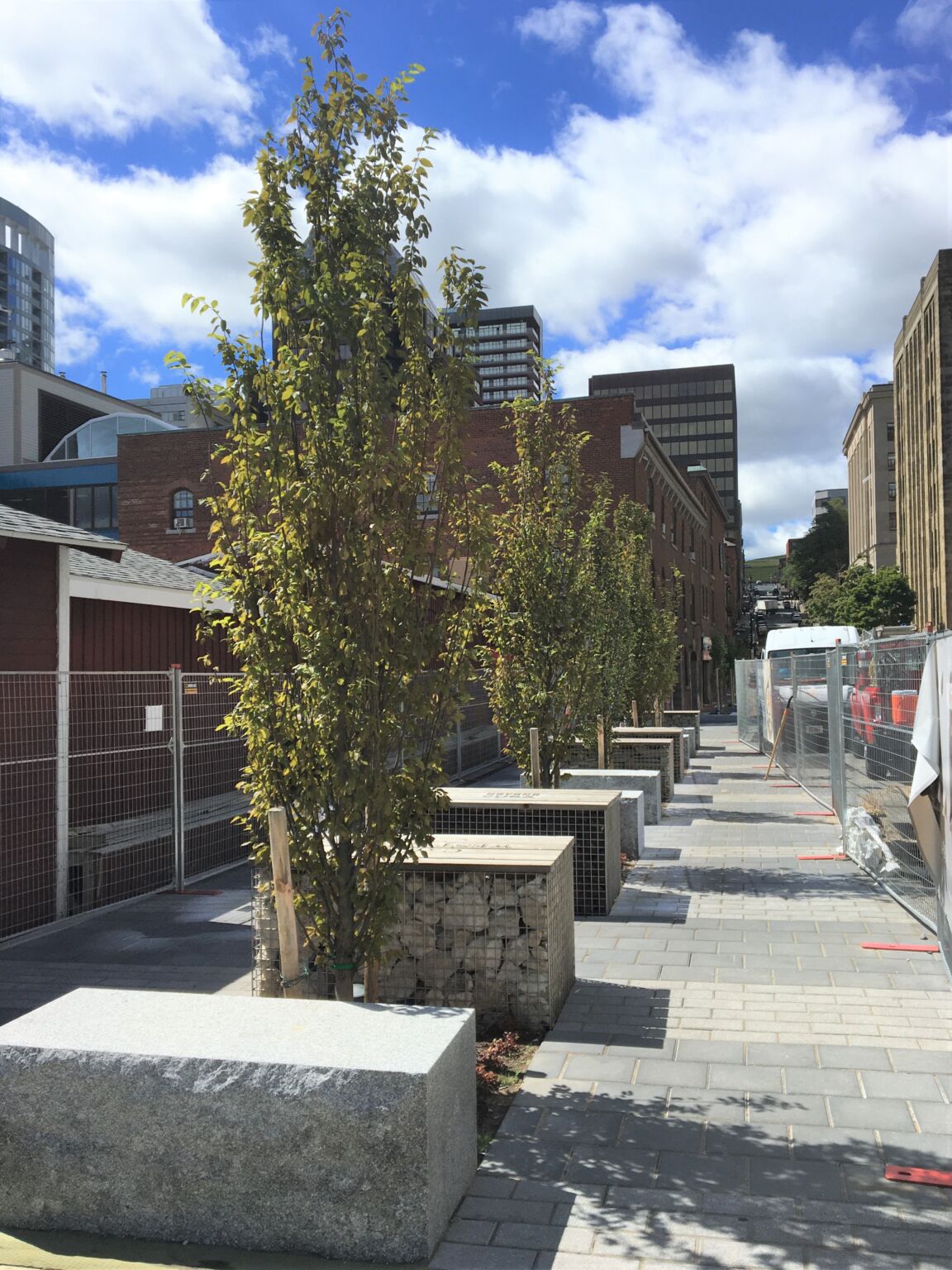