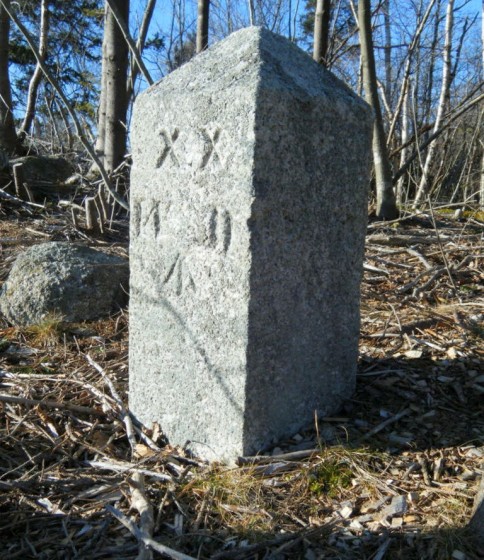 So it is getting to be walking around and noticing stuff season. For example, the other day my Twitter buddy Adam suddenly noticed a plaque beside Jubilee Road on the Camp Hill site. The plaque explains (sort of) a granite boundary stone installed by the British military in the 19th century to mark their property. I’ve been watching for these stones around town and this seems like a good time to encourage you to be on the lookout too.

The stone on Camp Hill, and others like it, have the broad arrow symbol that was often used to mark military property like cannons, or canteens, or tall trees that would make a good mast. Random letters, like the O, are probably references to a point on a map or plan of the site.

Similar markers can be discovered on military sites around the community. Here’s one from the western edge of Citadel Hill. And another on Gottingen Street at the northwest corner of the military base. Besides the broad arrow these markers often have WD standing for War Department (from back in the days when they knew what the military was supposed to do). This crisp marker is at York Redoubt, out in my part of the world. Hiding in plain sight on Barrington Street are a cluster of markers at the foot of Spring Garden Road, at the southern corner of the Maritime Centre property. One is carved in the corner post of St Matthew`s fence. There are two others and a plaque near by. Stop and take a look for yourself (because I forget exactly what’s going on  – an ancient footpath, I believe). There was a military office here in the 1880s next to the Academy of Music.

On a visit to McNabs Island I discovered why these markers have stayed in place for the last 150 years. One had been dug out of the ground for some reason and you could see that, iceberg like, a substantial portion of stone was underground. Notice that the buried portion was left rough as it came from the quarry. No wasted energy on what was not going to be seen. So start looking, I’m sure there are markers I have not noticed. Likely search locations would be Point Pleasant Park, Fort Needham, Fort Massey or Royal Artillery Park. Lovely objects, beautiful designs; they’ll last 150 years no problem. We can never have too many of this sort of small-scale gift to the street.