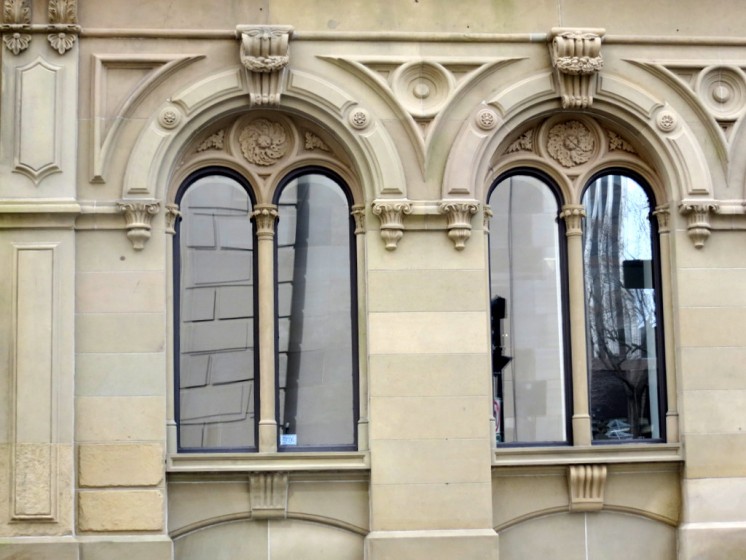 Have you drunk the kool-aid of the Marie Kondo de-cluttering phenomenon? Folding my socks in that strange fashion has been surprisingly satisfying. Also rewarding is her concept of being aware of things that spark joy and this blog is about a little discovery that has sparked joy for me.

Recently I led a Jane’s Walk to look at buildings designed by architect Henry Busch in late 19th century Halifax (visit my earlier blog for more detail on Busch and his buildings). Preparing for the walk I relied on the excellent research of others (thanks, Gary) and I also spent time closely observing Busch’s downtown buildings. I gradually realized that all the buildings had arched window and door openings, but what really made me joyful (I’m serious) was the discovery that Busch often divided his arched openings in a particular way.

The 1860s Prince Street block, associated with Busch, will give you the idea of the arches. The arcades of arched openings on the ground floors are unique in Halifax. That’s why The Triangle pub on the corner looks so pretty. Busch’s arched openings are often divided in the same manner: two arches within a large arch and a circle or medallion filling the gap between the smaller arches. The ground floor of his 1865 Howard Building at the corner of Prince and Hollis shows you what I mean. This is called an arcaded window, and the form was common in Renaissance Italy, which was the muse for Busch and other architects of his time. Look at the windows in this palace in Florence as an example. So that was my simple observation: over a thirty year period Busch often divided a large arch into two smaller arches plus a circle. There it is above the front door of the 1875 Halifax Visiting Dispensary on Brunswick Street.  You’d be surprised at how happy this discovery made me. Just down the block at the 1879 Halifax Academy, the dormers have arcaded windows. These ones could use a little care and the red infill in the window arch is unfortunate, On the Sackville Street facade of the Academy is a giant window arcade but the round window has been bricked in. Here the new window frames are good and the brickwork is sublime. All the windows are slightly different on the 1888 Khyber Building. I was amused to see Busch conflicted with how to divide the spaces within these pointed arches. I think he was a reluctant Goth. Back on Brunswick Street, the 1893 Salvation Army Citadel has a central arcaded window that would have looked comfortable in the buildings Busch was designing 30 years before. The Busch designed building we will all be visiting this summer is the 1878 Normal College in Truro (my photo is from the 1970s). It will soon be the new home of the town’s library. The design is similar to the Academy Building in Halifax but a little more wacky (it was also on a stamp and featured in the Second Empire architecture of Canada book). The central dormer has a now familiar arcaded window, but in the windows below the proportions of the elements are changed (they remind me of giant lollipops, in a nice way). And the arch of the door is filled with a bunch of circles as if Busch was playing with his compass as he drafted the plan. While I was looking for images of Renaissance arcades on the internet I came upon the Doge’s Palace in Venice and the coloured brick and the oversized quatrefoils made me think of the Normal College. Just another spark of joy.