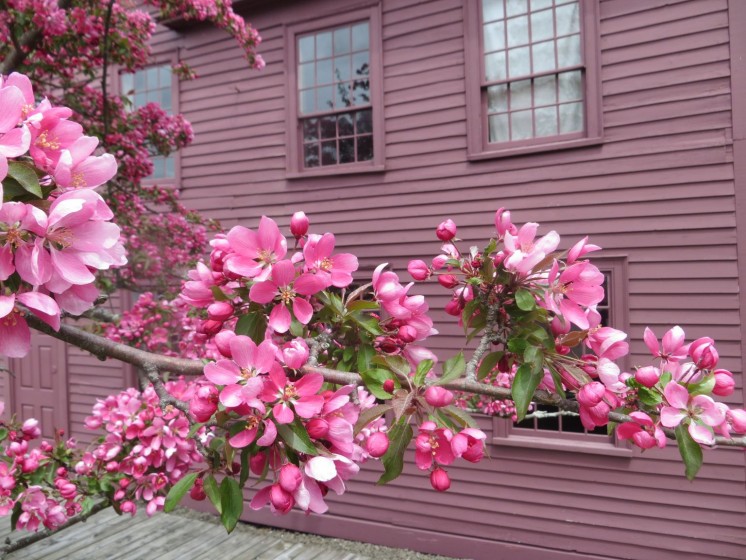 The natural world changes so quickly in May it always makes me a little panicky that I’m missing the moment. But looking at my photos for the month I realize we did get out and embrace some experiences. I’ve already recounted our trip to the Bramber Weir and what I learned preparing for my Jane’s Walk on architect Henry Busch. Here are some other little adventures.

I sampled several Jane’s Walks and they were all satisfying. Jacob Richie led a tour through Westmount, a post-Second World War subdivision so self-contained that I’ve almost never been inside. Very much a community planned using ideas current at the time, it was designed so the front entrances of homes faced pedestrian paths. We were shown that many houses have now been reoriented so their front doors are on streets originally intended as service lanes without sidewalks. Another win for the car. House designs in the subdivision were selected from catalogues of plans commissioned by the Canadian Mortgage and Housing Corporation that were supposed to reflect the character of our region. Today it’s a very desirable community so many of the 60-year-old homes have been enlarged or replaced completely. This house is one of the original CMHC designs still oriented to a pedestrian path. On another Jane’s Walk, city staff offered insights into the value of urban trees and the challenges of caring for them in a landscape of concrete and asphalt. On University Avenue we were shown a young street tree surrounded by a curb, a best practice.  People tend to not walk over raised beds so the soil does not get compacted and the tree is less likely to be damaged. Next to it is a tree with half of its roots under concrete and the rest under compacted soil. Not so good. We heard how parking lot trees save gasoline and prolong the life of pavement. And while looking at a particularly dreary view of the IWK, we learned that hospital patients who have a view of trees are ready for release sooner than those who do not. The wonderful Doors Open weekend is coming up and I attended the announcement of this year’s venues at Government House. I thought the chandelier deserved star billing with Doors Open chair Tara Wickwire and friends. Gov House is always one of the favourite sites on Doors Open. Here I am not noticing my reflection while photographing a native warrior candle holder on a Gov House mantle. Food security and strong communities are hot button issues so it was exciting to see all the support on the opening day of the Spryfield and District Community Market. It’s happening every second Sunday. Some community action very close to home was a cemetery cleanup that happened just across the road from our house. The cemetery has stones dating back to the 1830s and probably was used by the communities of Purcell’s Cove and Ferguson’s Cove for years before that. Members of the Purcell’s Cove Social Club came out to clear brush on a foggy Saturday morning. The club had rented a chipper, and when it jammed there were lots of folks observing the repair. When I posted this image on Instagram a friend said it reminded her of a Norman Rockwell illustration. The rural landscape is sublime as it turns many shades of green. We revelled in that moment on a day trip to Annapolis Royal to shop at the annual Rare and Unusual Plant Sale. This has become quite an event attracting 100s of people to the small community. Here crowds wait for the Town Crier to declaim the opening. Charms abound in Annapolis Royal. I lingered by the flowering crab apple trees next to the Sinclair Inn (that has bits dating back 300 years) while Sheila took more money out of the bank machine. We have a harbour view, and one sign of seasonal change is the start of Wednesday evening sail boat races. Always amusing to observe meetings of sail and “steam.”  There will be occasional blowing of horns. And speaking of noise making, one morning we recognized the sound of cannon fire and realized that a Mexican tall ship had slipped by and was firing a salute. What better way to mark the start of a new season.