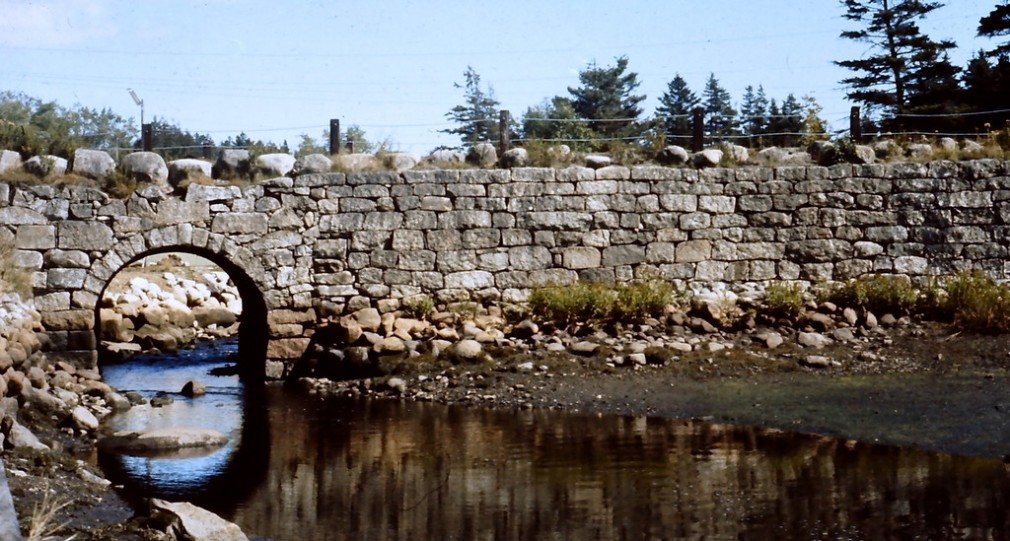 Bridges are popular metaphors: we value bridge builders, you cross that bridge when you come to it, or how about burning a few. Recently I was thrilled to notice a tiny, abandoned, stone bridge we have been driving by for decades. Maybe the allusion for it is: build your bridges so well that they outlast their usefulness.

My bridge discovery is at the head of Mader’s Cove on the road from Mahone Bay to Lunenburg. I glimpsed the tiny stone structure off in the woods, and of course Sheila turned the car around and we investigated. I assume this little piece of engineering was on the old road and at some point the highway was straightened and widened and the stonework was allowed to disappear in the woods. That is why I had never noticed it, when the leaves come out it is concealed in the greenery. This got me thinking about the short list of stone bridges I could recall in Nova Scotia. Here we go.

The prettiest and most accessible stone bridge is at the Back Harbour entrance to Chester. It was constructed around 1882 and is a Registered Historic Property. The stone arch is in an equally impressive stone causeway.  My photos are from the 1980s but the bridge is still in use and you could well have crossed without noticing its charms (the header photo is another view). The oldest stone bridge I know crossed the Moose River in Clementsport. This finely-built arch dates from 1828 and my photo was taken in 1975. The keystone tells some of the story. A Freemason symbol (square and compasses), the date, and AIM Co: the Annapolis Iron Mining Company.  The AMH is a mystery to me. Any ideas? The Annapolis Iron Mining Company, who financed the bridge, mined their iron up the Moose River and hauled the ore down to Clementsport in horse-drawn trucks on a railroad made with maple rails. Local wood was made into charcoal to smelt the iron in a tall brick furnace. Sort of like burning biomass today.

For the last few years the arch has been filled in and the Moose River flows through a big new cement culvert nearby. Nice that the arch was saved but when I took this photo in 2012 the stonework to the left was looking a bit dodgy. The most refined and massive stone arch bridge was also the least used. It was built about 1890 as part of the Chignecto Ship Railway. The idea was to transport ships across the Isthmus on a double railway track. The project didn’t turn out so well. Really it never was finished. There pictures were taken in the 1980s on a visit with a group of friends who were Industrial Archaeology enthusiasts. You can see the bridge today by taking a trail from the Tidnish Dock Provincial Park. The Hipson Creek stone bridge in Lower East Pubnico is another example of a bridge that has outlived its usefulness and now is celebrated for its good looks. The “new” road runs close to the c1900 bridge and there is a small park in between where you could have a picnic and admire the old stonework. These photos was taken in the 1980s by a colleague. Probably many stone structures are hiding in the landscape, we just need local informants to point the way. A spectacular example is a tiny culvert in a massive wall of stone I was shown by my friend Alan. The structure, near Big Bras d’Or, is totally concealed in woods between the Trans Canada and old Route 5. It felt like coming upon a Mayan ruin lost in the rain forest. When we visited in the 1980s it was impossible to get a clear photo. There are Alan and Sheila up at what I understand was the roadway. One of Alan’s ancestors played some part in the construction. An elaborate stone bridge that we don’t miss was over a stream that now runs under the much-loved Armdale Rotary. The old Bethany Church building (to the left) still overlooks this scene.