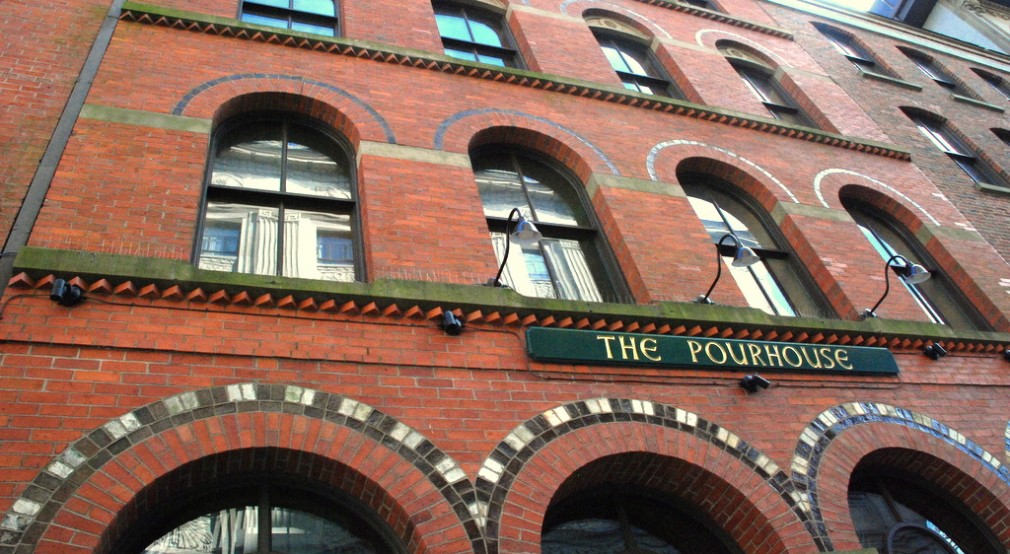 Did you attend any Jane’s Walks last weekend? Experiencing the city with folks who are passionate about their surroundings, exactly what I enjoy. A great job by Sam Austin organizing this event!

I attended four walks and led a fifth. Here I am introducing folks to the work of architect Henry Busch. Several people on the tour had lived in Busch’s own house on Creighton Street (no ghosts but cold in winter, they reported). Busch began practicing in Halifax about 1860 and continued for 40 years. A good selection of his buildings survive and demonstrate how Halifax transformed from an eighteenth-century wooden town to a brick and stone Victorian city centre, with confident businesses and institutions that cared about the welfare of the population.

If you want to take your own tour, here are some Busch buildings organized chronologically (the first time I’ve seen this done with pictures).

The earliest work of Busch’s we know is the design of the Legislative Library in Province House in 1862. This is a favourite interior of mine; the cast iron brackets in the shape of our provincial flower are sublime. Until the mid-1870s Busch was in partnership with Henry Elliot and their firm was responsible for the group of commercial buildings on Prince Street between Hollis and Bedford Row. The more I looked at these buildings the more fond of them I grew. Consider the arcade of arches on the ground floors and that this is the last complete block in the downtown with shop fronts on a down street. The sandstone and Italianate-style Howard building, on the corner of Hollis, housed a dry goods store owned by a woman; very much the exception in 1865. The section of Brunswick Street below Citadel Hill was a terrible slum that the city wanted to clean up. In the last third of the nineteenth century a number of institutions were built here to improve the neighbourhood and Busch designed the three buildings that survive. The oldest is the 1875 Halifax Visiting Dispensary at the corner of Prince. It provided free medical care aimed especially at poor women and children. The city morgue was conveniently located  in the basement. Just down the block is the biggest Busch-designed building left in town: the Halifax Academy, now owned by NSCAD. This high school was built in 1879 and girls were first admitted in 1885. Like many 125 year-old buildings it has lost some of its nuance. The best restored Busch building is also the smallest: the Bandstand in the Public Gardens. It was commissioned to celebrate Queen Victoria’s Golden Jubilee in 1887. The People’s Choice Award for favourite Busch building goes to: the 1888 Church of England Institute on Barrington Street (you might know it as the Khyber). Many people on the tour remembered when it housed Sanpaka vegetarian restaurant, the Bean Sprout health food store and Wormwood’s Dog and Monkey Show cinema. The youngest building in this selection is the 1893 Salvation Army Citadel, the last of the caring institutions built on Brunswick Street below Citadel Hill. My photo is from the 1970s when it contained a print shop and the brick was painted green. Now it houses the Halifax Alehouse. Before preparing for the Jane’s Walk I was not aware of how many Busch buildings are still around (I can show you some more if you want). Recognizing his work and his clients is another way of understanding why our city came to look the way it does.

Henry Busch was born in Germany in 1826 and emigrated to the United States when he was about 20. He moved to Nova Scotia in the late 1850s because our climate suited him better than Kentucky’s, where he had been living. In the one photo of him I have seen Busch rocks a neck beard (neard). Yikes! Wikipedia told me that  fellow German Richard Wagner and American author Henry David Thoreau had neck beards so I wondered if it was a creative, artistic thing. But then I looked up Hibbert Binney, the very conservative Anglican Bishop who left money to build the Khyber building. Turns out he grew the mother of all neck beards. YUCK!