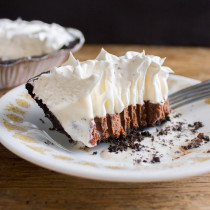 When we tell people that we are living in Louisiana, we usually get one reaction and one reaction only: the head is thrown back, the eyes are lifted to the heavens, and a single sentence emerges from their lips: “Oh my god the FOOD!” This is usually followed by a list of places we HAVE to go and things we HAVE to eat. Gumbo. Jambalaya. Shrimp Etouffée. Red Beans and Rice. Crawfish. Gator. Deep fried anything.

Of course, with food allergies – especially to peppers (of all things to be allergic to down here!), some of those were NOT going to happen.

What could happen though, were the desserts! Beignets on the banks of the Mississippi, King Cakes at Carnival time, and the most memorable cheesecake I have ever eaten.

It was simple, a plain New York style cheesecake with a crunchy graham cracker crust, a layer of fresh blueberries, and the tart sweetness of a Creole Cream Cheese Cheesecake. I was hooked. What is this creole cream cheese and WHERE CAN I GET MORE OF IT?

Before I get ahead of myself, I’ll just quickly explain the difference between Creole and ‘Normal’ cream cheese. The secret is in the brief fermentation of the creole cream cheese, making it softer, more tart, and seriously tangy, like a mix between cream cheese, cottage cheese and greek yogurt. That’s probably the best way I can describe it. Other words come to mind, like ‘heaven’, or ‘euphoria’ or even ‘the Creoles have rediscovered the lost Greek recipe for the ambrosia of the Gods’.

Given my current obsession, there was no way I was going to pass up that carton of Creole Cream Cheese Ice Cream in the freezer at the grocery store. I knew it had to come home with me.

Except that carton wasn’t enough. It’s never enough. I always have to experiment and take it a step further, and voila! the Nutella and Creole Cream Cheese Ice Cream Pie was born!

It is transcendent. The tartness of the Creole Cream Cheese, mixed with the sweet, nutty chocolate of the Nutella creates an amazing mix of perfection in every bite.

Step 1: Oreo pie crust. Yup, same one as the Peanut butter pie recipe. It’s my nightshade allergy-free go to (one day I’ll have a real pie plate. Then y’all better watch out). Dump your Nutella in a bowl. Lick the spoon until you can see your face in it. Mix in your evaporated milk until it’s all combined. It’ll become a little crumby and look strange, but trust me, this is an important step. Everywhere on the internet says not to freeze Nutella because it turns into a hard rock. But we’re going to because we are FEARLESS REBELS in the kitchen and we don’t let anyone tell us what we can and can’t do. BUT we need to add the milk or else we prove them right. Shhh. Dump that in the bottom of the pie and press it in as flat as you can. Try not to cry when your pie crust inevitably cracks into five million pieces because there’s a reason it was the only one left on the shelf at the store. It’s okay. Remember, FEARLESS. Onward! Now the ice cream! We want it to be still frozen, but it needs to be soft so we can work with it. The carton I have melts in two seconds because it’s June in Louisiana, so I just left it on the counter while I did the Nutella step. If you need to zap it in the microwave until it’s workable, probably 10-15 seconds should do. Spoon it out and layer it over the Nutella mixture, smoothing it out as best you can. Now the whipped cream on top! I made these pretty rosettes using a cake decorating tip (Wilton 2D), but you don’t have to be so fancy. Pop it in the freezer for a minimum of 4 hours. I know. It’s hard. Waiting is the WORST. When you’re ready to serve it, make sure you do so IMMEDIATELY. I recommend cutting it with a knife that’s been run under hot water, just to get a really nice, clean, pie wedge shape out of the ice cream and Nutella. And oh my goodness. The Nutella has transformed into a creamy, hazelnut chocolate fudge, the sweetness of it balanced by the tangy ice cream. HEAVEN. I could not resist. It was melting, what was I supposed to do? Just stand there and watch it turn into a puddle? Those layers. Those drips… 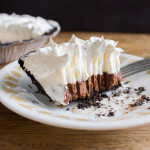 Now the hard part. How can you get your hands on Creole Cream Cheese Ice Cream? It doesn’t exist outside of the Southern US. Or even outside of Louisiana. I know that Blue Bell (when it comes back… one day…) makes Creole Cream Cheese Ice Cream, and a couple smaller, local creameries do too, but many of us are sadly out of luck when it comes to this. So some alternatives are:

Regardless if you’re able to use Creole Cream Cheese Ice Cream or any other flavour, this is the perfect fudgy, ice creamy summer treat!

This recipe was featured on The Wednesday Showcase!