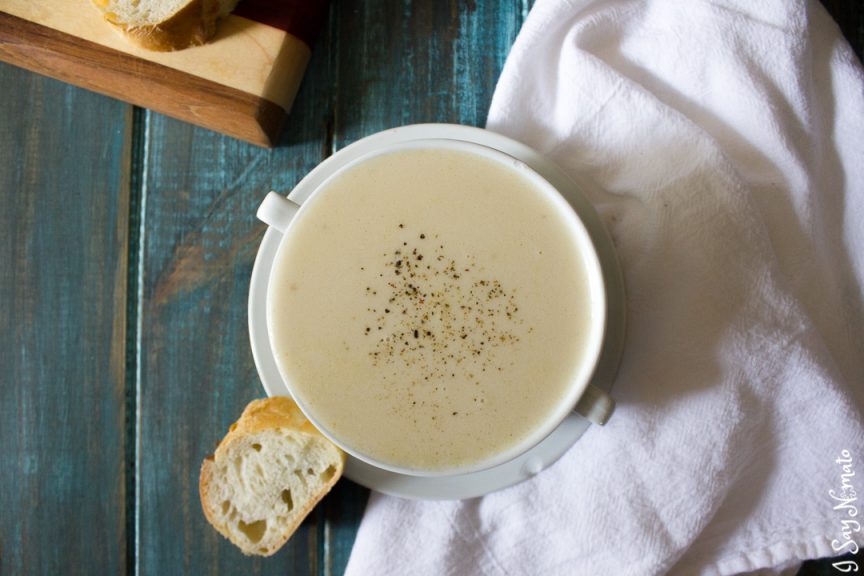 This shop has been compensated by Collective Bias, Inc. and its advertiser. All opinions are mine alone. #ShareYourBrilliance #CollectiveBias

A creamy garlic lobster bisque is just the thing to keep you warm this winter. Rich and full of flavour, it is even better the day after you make it! 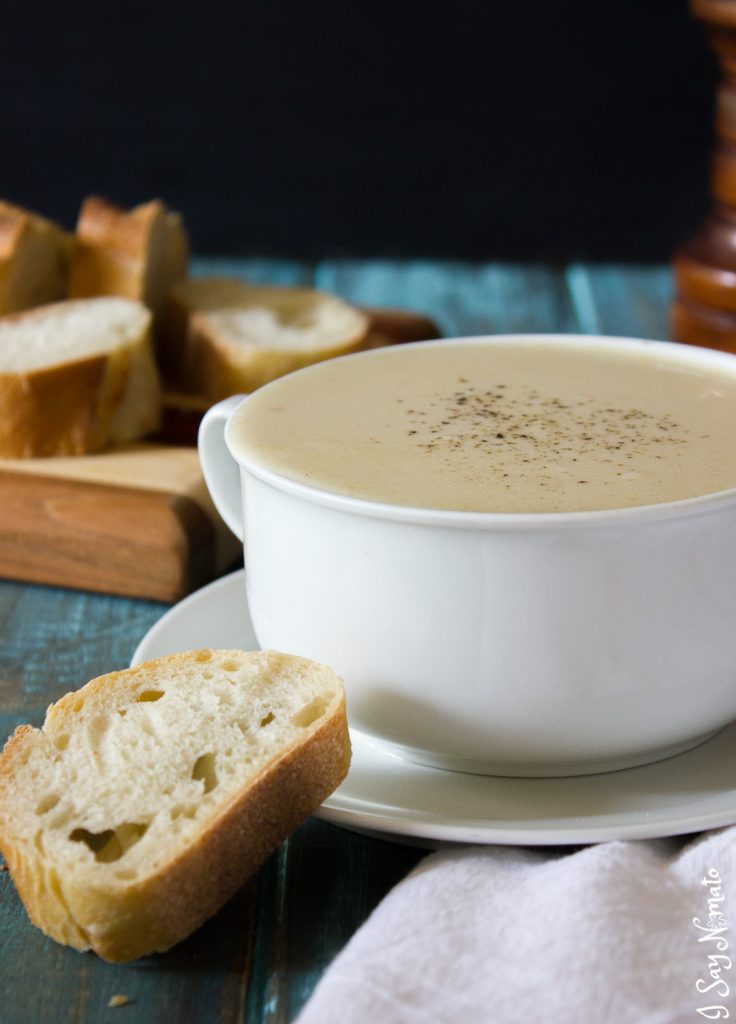 Lobster Bisque is quite possibly one of the fanciest-sounding foods ever. I mean, seriously, you have the lobster (which can be found year-round in Nova Scotia – though the prices are definitely better in the spring!), and then the creamy, heavenly bisque. Which is French, so obviously it’s fancy! (Obviously.)

I’m adapting this bisque recipe from The Joy of Cooking, adding in garlic among other things, because what’s lobster without garlic? NOT MY LOBSTER.

Did you know that lobster, though considered a delicacy now and one of the most expensive seafood dishes depending on where you live, used to be considered ‘poor food’? Children of poor fishermen would eat lobster on the regular and be made fun of for it.

To be fair, they do look quite Lovecraftian. I mean just look at Manny. 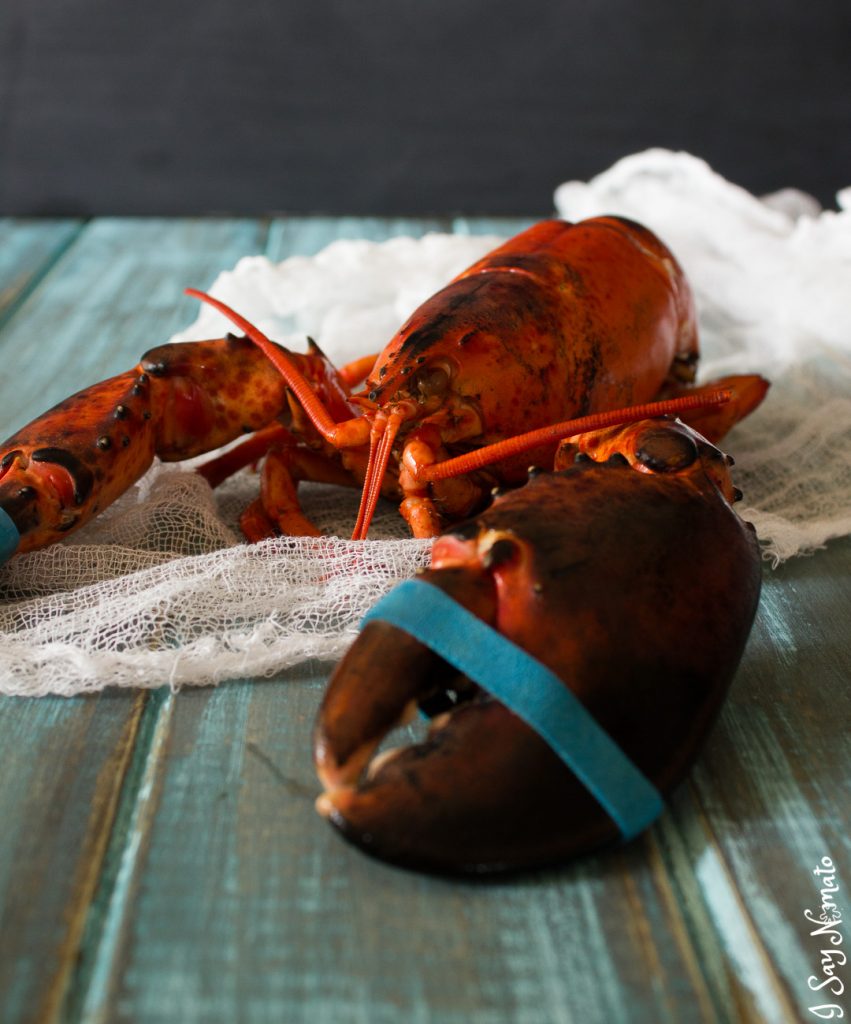 Yes. I named my lobster Manny.

No, that was not a smart move on my part. I felt horrible when I promptly disemboweled poor Manny with a lobster eater’s secret weapon: 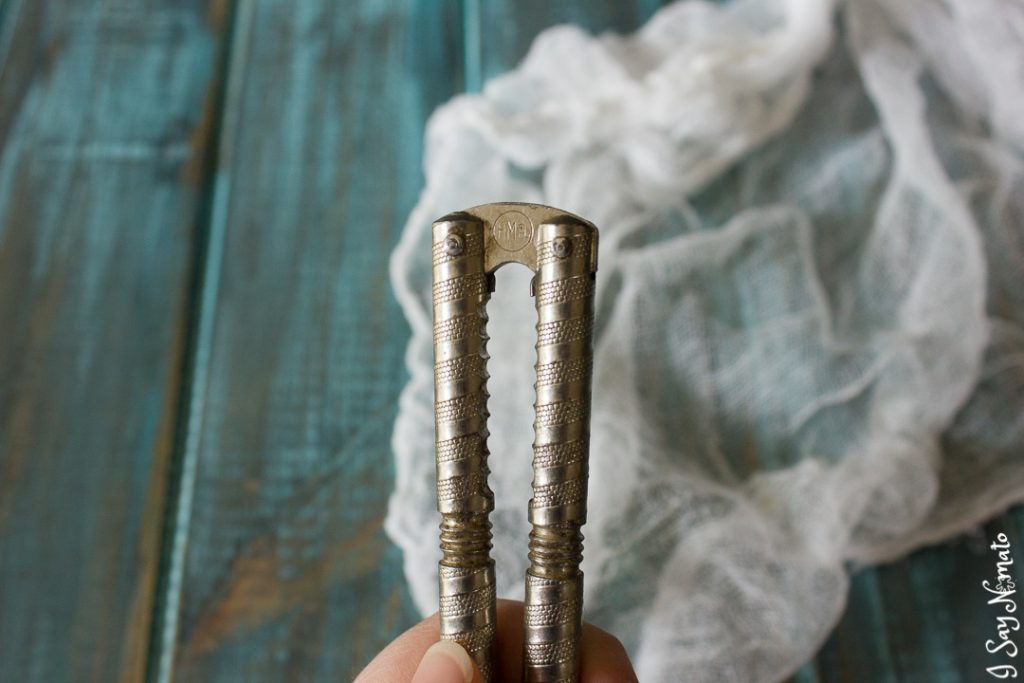 The nutcracker. Now, I’ve seen some people just attack the thing with their bare hands, but I’m not a Yarmouth fisherman, I need a little more physics to help me out! Scoop out every little bit of that lobster meat and set it aside in a bowl.

The best parts are the claws and tail. Some people eat the head and body, but I usually don’t. Those parts go in the compost!

Don’t throw out any of the shells, and don’t worry if you don’t get all the meat from the legs. We’re going to make the most delicious stock you’ve ever tasted! 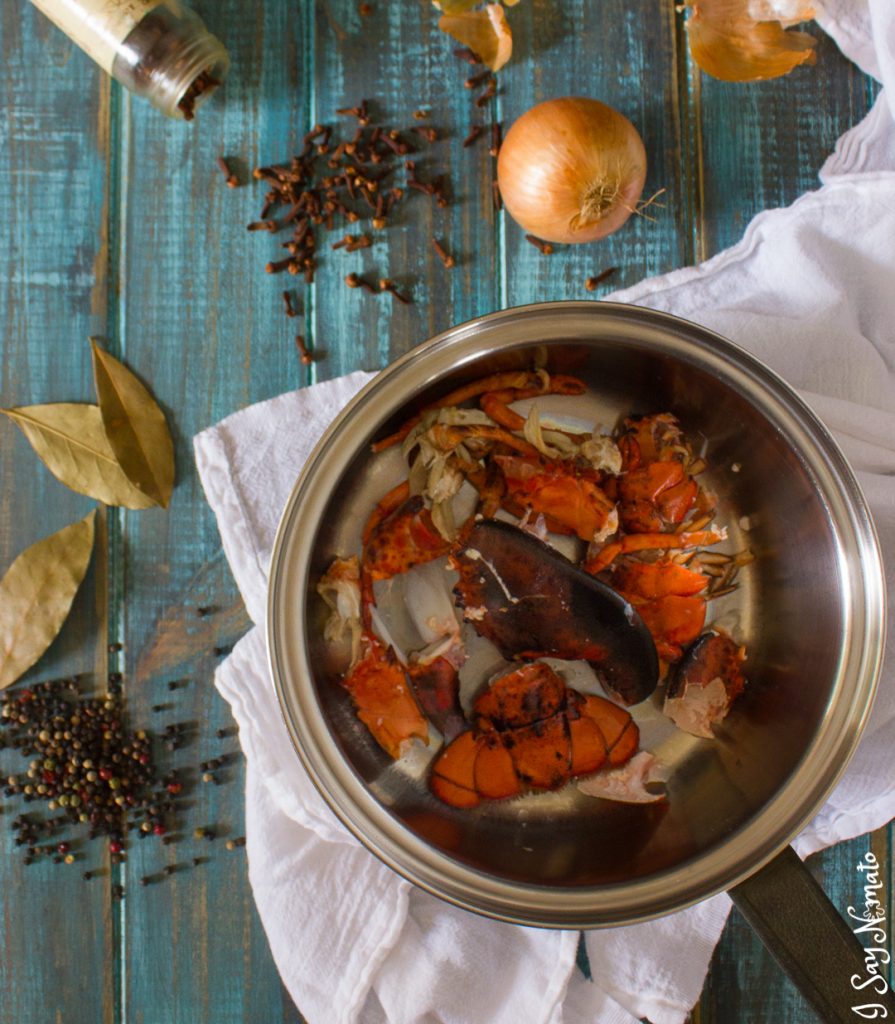 Seriously though. This stuff is amazing. I should have made way more. We’re going to get every scrap of flavour out of that lobster! All the shells, tails, everything goes in a pot, along with some cloves, peppercorn, a chopped onion with the skin still on and some other stock of your choice. I use my classic homemade chicken stock, but you could use vegetable stock or fish stock too!.

Bring that to a boil and let ‘er go for at least 40 minutes.

Then, strain the broth, making sure to get out all the bits (careful, it’s hot!), and set aside. 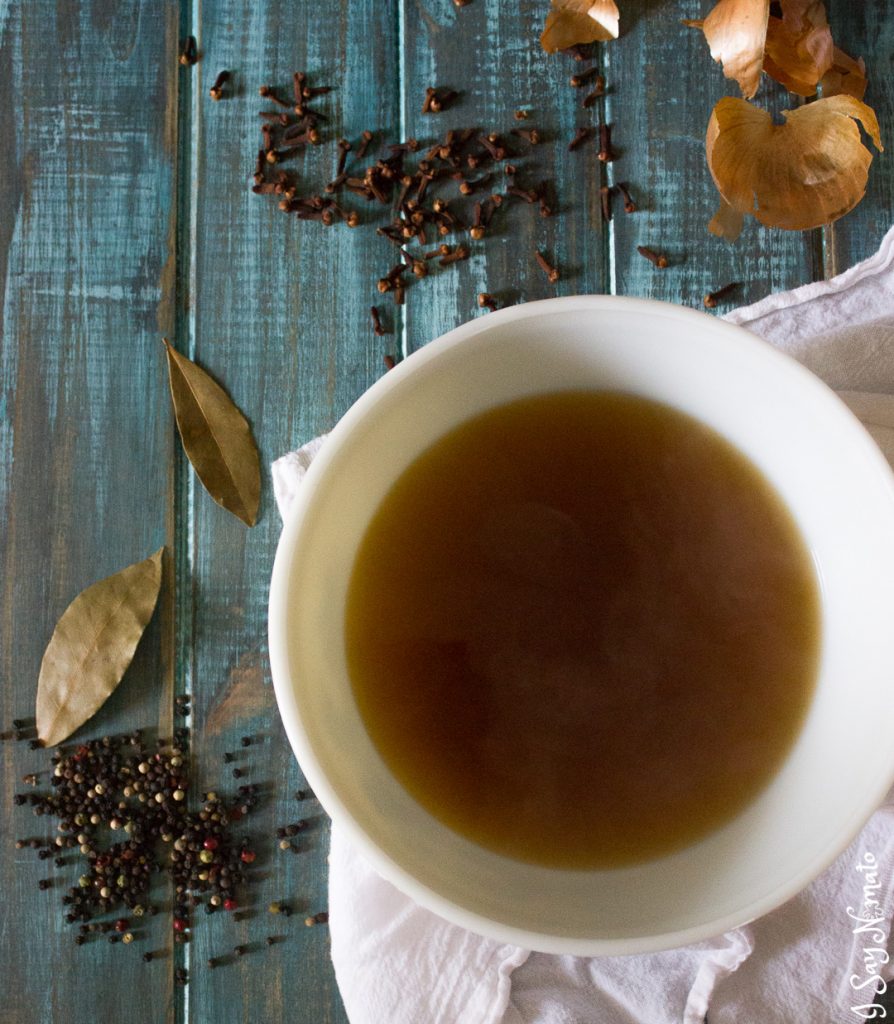 Look at that rich colour, ooooh man that stock was de-licious! SO MUCH FLAVOUR, YOU GUYS.

Next we’re going to start making a roux to make our bisque nice and thick. Melt the butter on the bottom of the pot at medium-high heat. Add the garlic in and cook for about 2 minutes, until you can really smell it! Then whisk in the flour and cook for another minute or so. 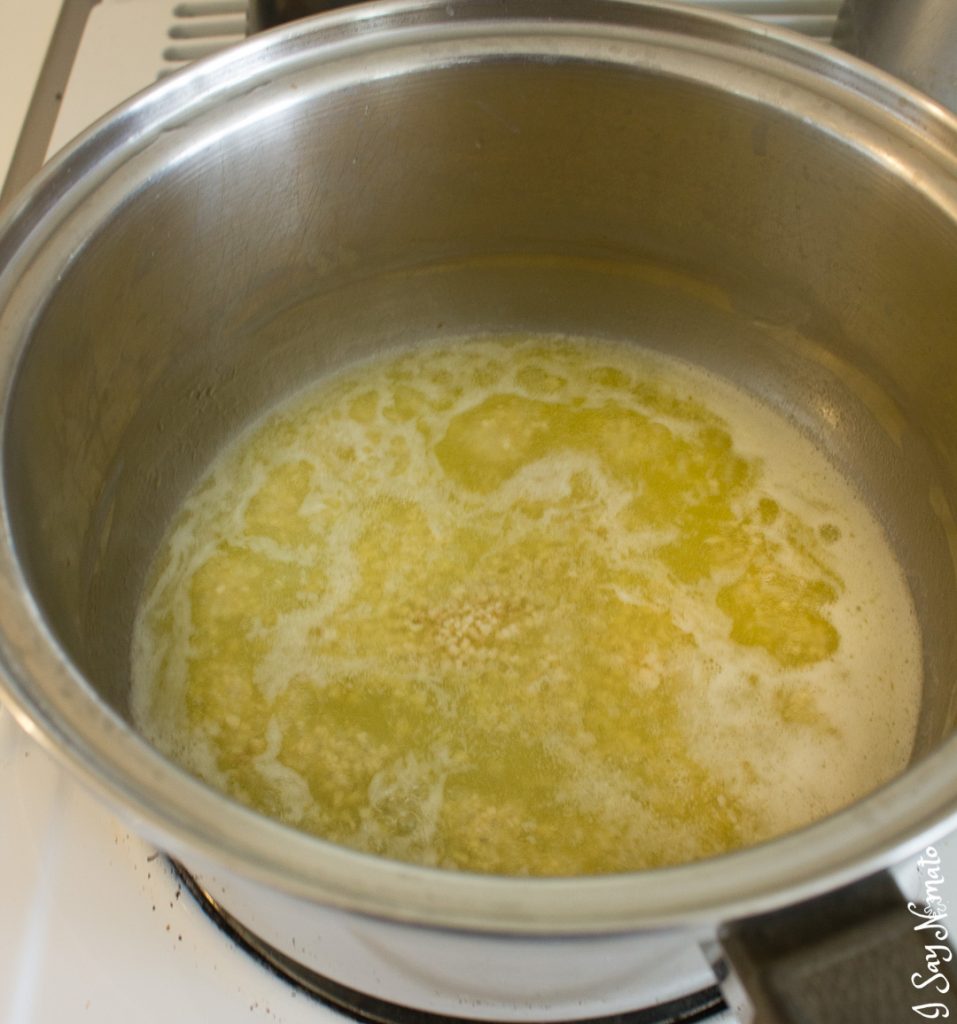 In a smaller pot on the side, heat your milk. It’s important that the milk is hot (but not boiling), otherwise it could curdle when you add it to your flour/butter mixture, and that’s gross. 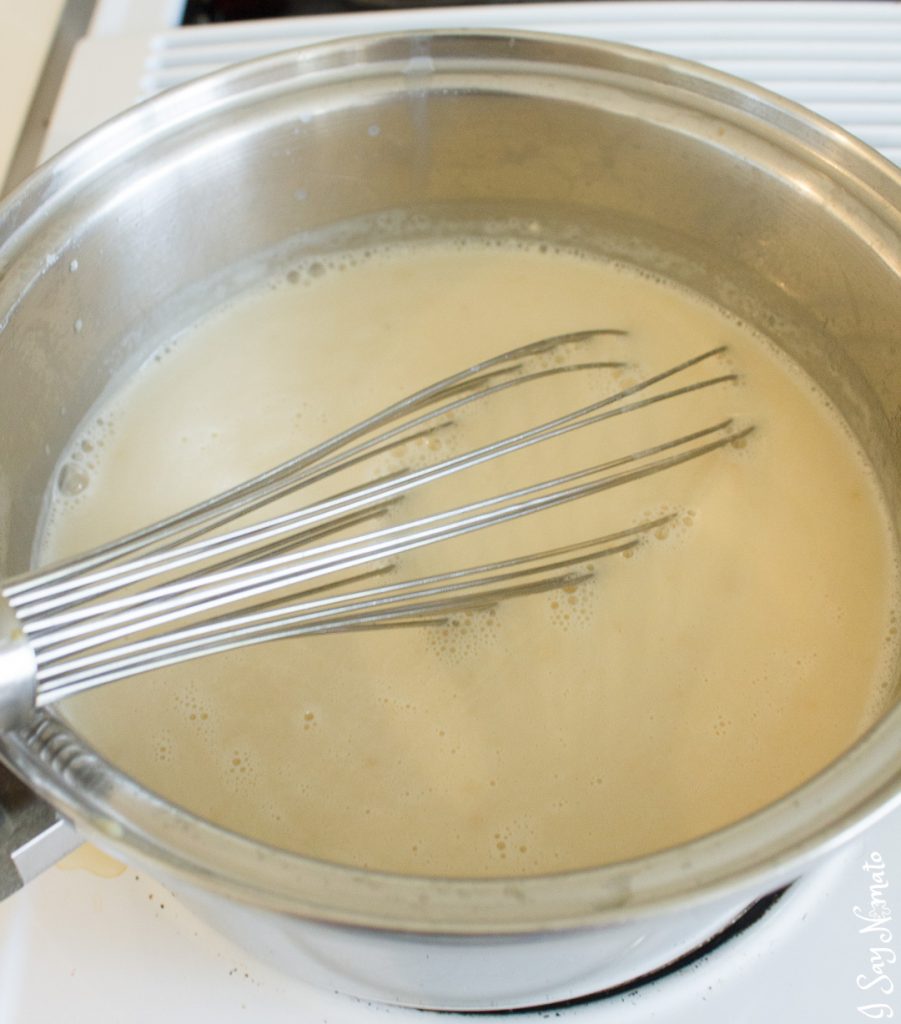 Bring that mixture to a boil, and add the lobster stock. Let it simmer for about five minutes. Then add the lobster tail and claw meat you set aside, hot cream and pepper.

Ohhhhh my goodness, I can’t even begin to describe how rich and delicious this is. There’s a reason bisque is considered decadent. 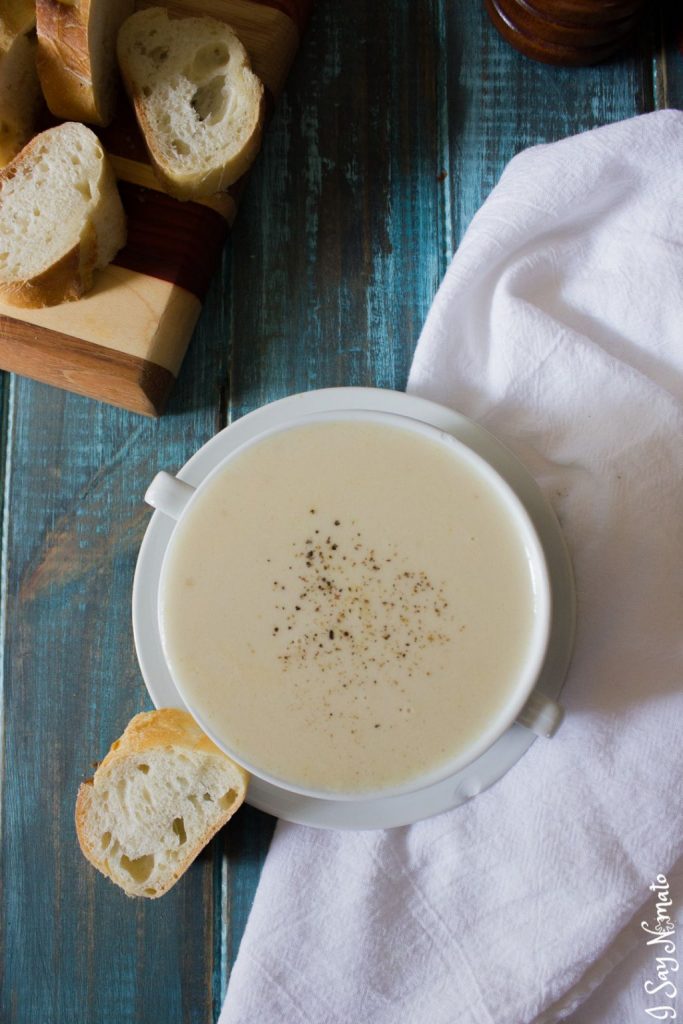 Do you know what? It’s even better the day after! After all those flavours have had time to really sit and meld, yum! I’m always so surprised at how much flavour bisques have!

The bisque isn’t so fishy, so I don’t feel bad bringing it to work the next day and reheating it. I ALWAYS put my food storage containers in a bag when I bring them to work though. I’m completely paranoid about my delicious soups leaking all over my lunch bag! So when I heard about these Rubbermaid Brilliance containers, I was cautiously optimistic. 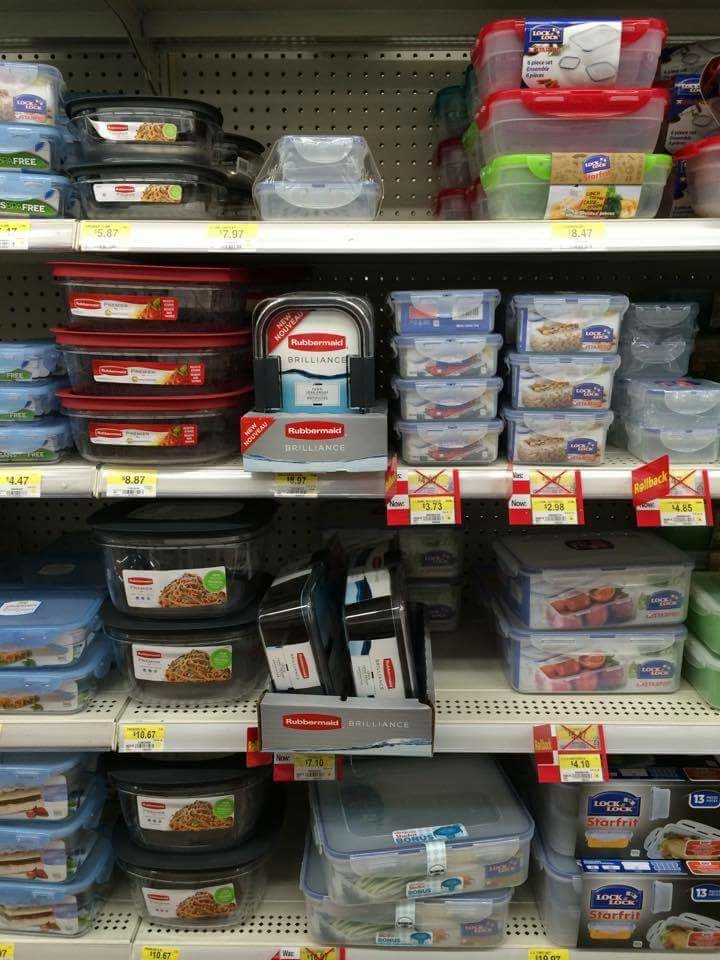 I found them in the food storage container aisle at Walmart. 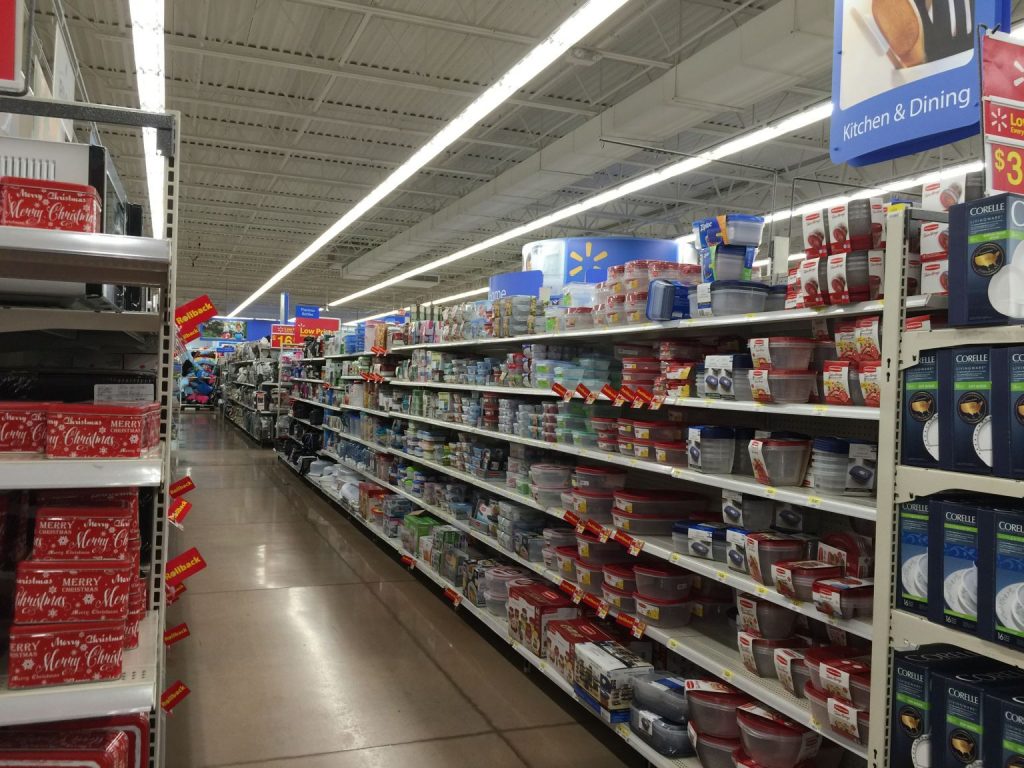 They certainly look heavy duty, with a rubber seal and little latches that keep the container shut. My favourite part about these containers is the really satisfying sound they make when the rubber seal makes contact, and you latch those babies shut! (I’m a dork, I know.)

I mean, look at this. 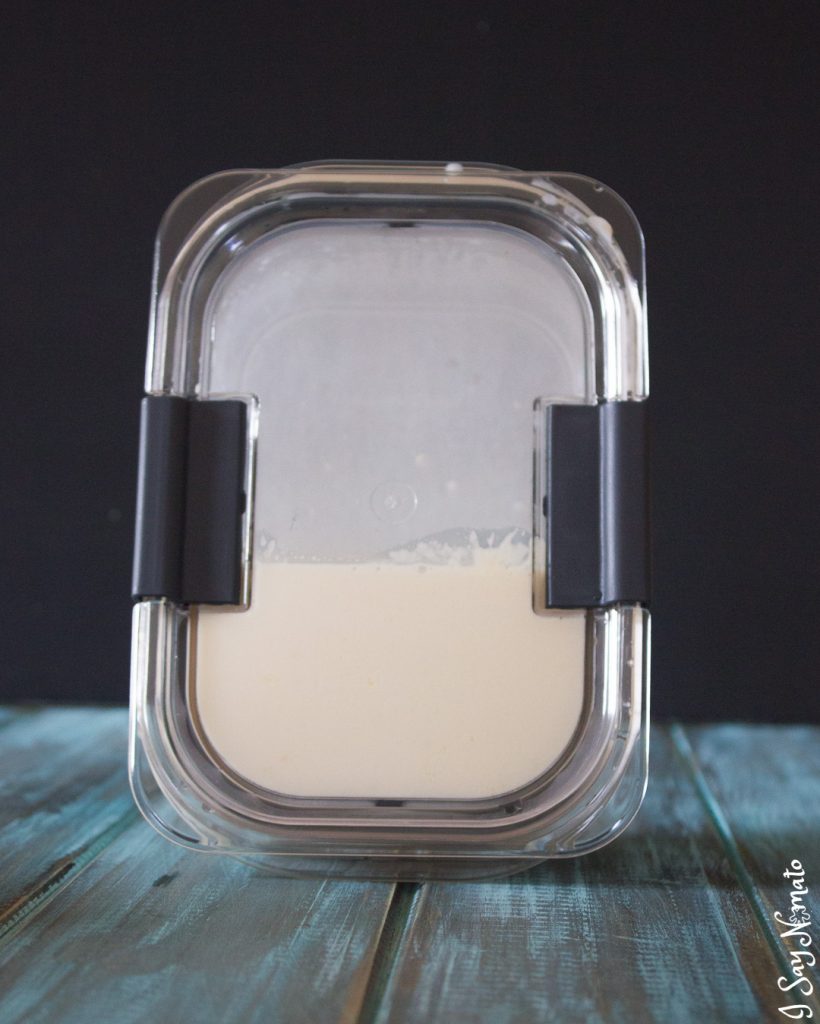 No lobster bisque at the bottom of my bag! When you reheat them in the microwave, there’s no splatter because you just lift the latches and there are vents underneath to let out the steam! 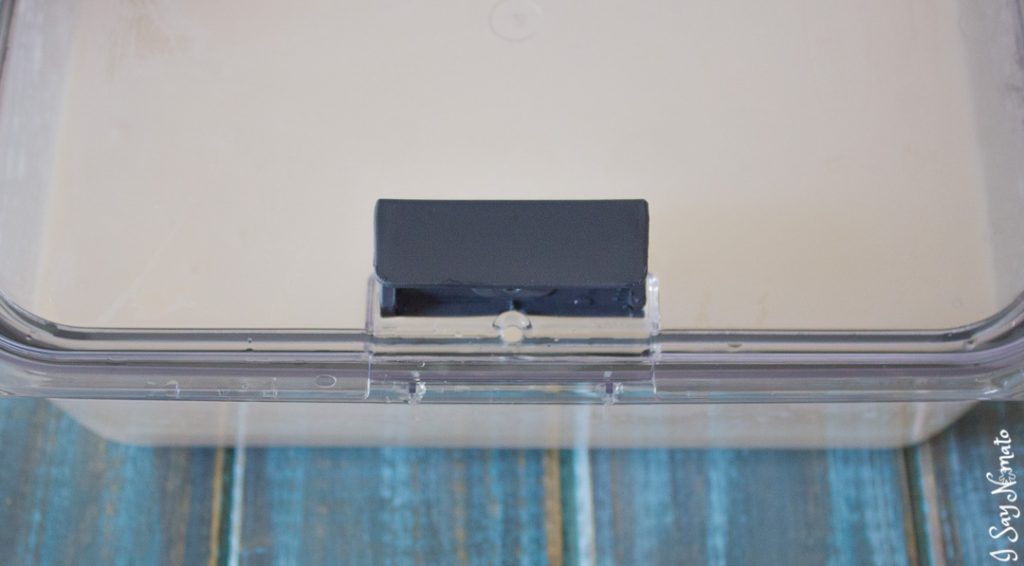 Plus they stack really nicely too (especially if you actually open the latches and let out the steam while the soup’s still hot so it doesn’t bulge in the middle! Oops!) 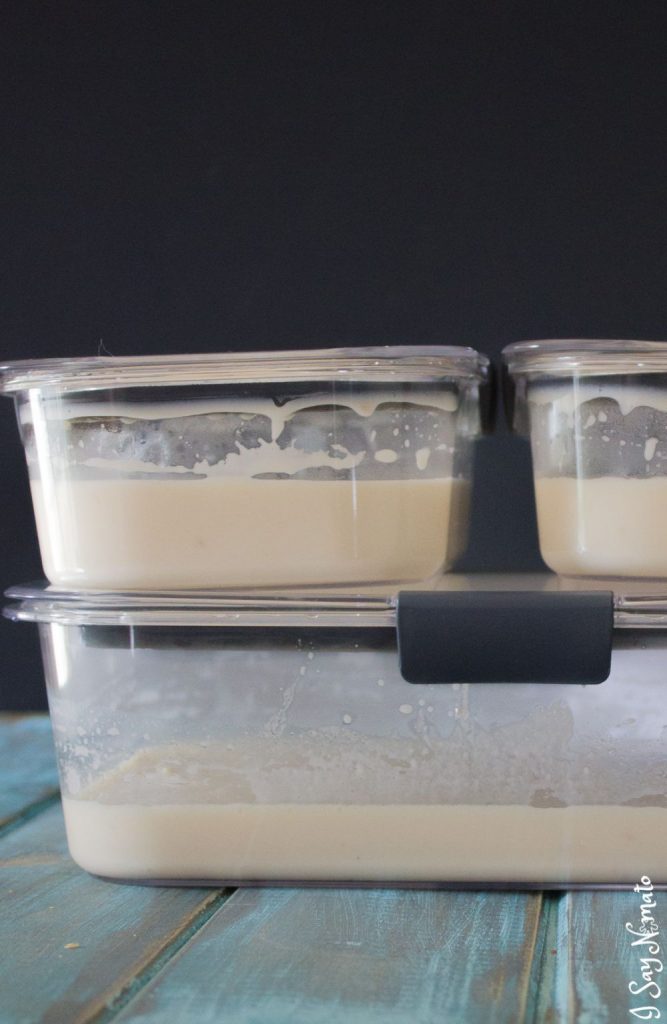 What’s your favourite lunch to take to work? 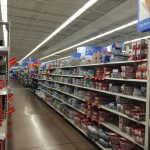 Print
Creamy Garlic Lobster Bisque
A creamy garlic lobster bisque is just the thing to keep you warm this winter. Rich and full of flavour, it is even better the day after you make it!
Course: Soup
Servings: 5 -7 cups
Author: Cristina
Ingredients
Instructions
Lobster Stock
Lobster Bisque