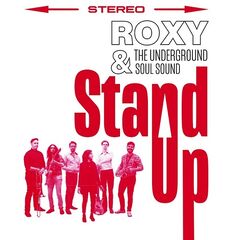 While it might be a bit hackneyed to say, right out of the gate the lead track “Fuse Box” is a jolt of vintage, horn-driven soul music that will propel you to your feet. Once there, good luck in standing still, as this music will get you grooving right along.  There hasn’t been a cup of coffee that has had as much propellant as this opening number does. Locally, folks will be more than familiar with Roxy & The Underground Soul Sound, as they are long-time fixtures of the Halifax music scene, and can be found regularly down at Bearly’s, the Carleton or the Seahorse, but with their latest album Stand Up, the band is poised to break out to a far wider audience.

This isn’t a clever game of charades or dress up, Roxy Mercier and her wildly talented backing band the Underground Soul Sound invoke the spirit of the late great Sharon Jones and her backing band the Dap Kings. Stand Up is a densely packed 10 track collection that clocks in at a tight 29m and 57s, and while the lion’s share of the album features Mercier front and center showcasing her range and power, there are a handful of instrumental tracks with The Underground Soul Sound showing off their chops. Until Doc Brown manages to put that Flux Capacitor into mass production, we will never be able to travel back to experience the glory days of Motown, or to recapture the magic of Sharon Jones, or James Brown; but fortunately for us, Roxy and the USS are here to keep the genre alive and vibrant.

Over 10 tracks, the horns and strings of the Underground Soul Sound are absolutely dazzling. Much like that explosive opening number, the band keeps the listener engaged and grooving right along with the proceedings. Coupled with the soulful and silky vocals of Ms. Mercier, it just elevates the entire production, and transports us, the listeners, back to those golden years of Gladys Knight, Diana Ross and Mary Wilson. Closing out the album is an equally combustible “He’s Alright”, complete with a blast of brass and funk. Fans of Motown and acts such as Sharon Jones & The Dap Kings (and the Daptone roster) will be right at home here, and quickly reaching for the repeat button as the album fades out. This is absolutely an album that will have you standing, dancing, and grooving right along for the entire 30 minutes, so do yourself a favour and Stand Up.