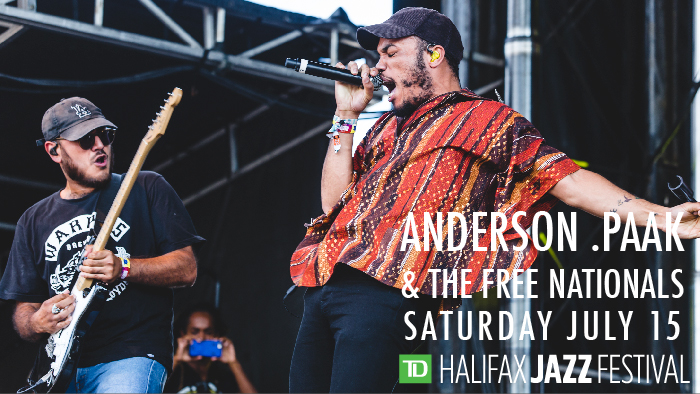 Native Californian Brandon Paak Anderson, known to the world as Anderson .Paak, is an acclaimed singer-songwriter, rapper, producer and virtuoso drummer. .Paak was nominated for two Grammy awards this year, Best New Artist, and Best Urban Contemporary Album for his latest album, Malibu, with his band, The Free Nationals.

Rolling Stone calls Anderson .Paak “one of the most amazing vocalists in R&B today.” .Paak’s musical range and artistry is a unique blend of R&B, 70‘s soul, hip-hop, EDM, funk, and rock n’ roll. His singular vocal abilities deliver smoldering tones combined with uncommon gritty expressionism that is effortlessly blended into straight-from-the-street narrative rhyme style, which steadily floats over the airy tracks. .Paak’s ingenious melodies, intelligent lyrical songwriting abilities, witty ad-libs, and clever hooks, pair perfectly with the production texture and extraterrestrial soundscapes. Tickets will be available for purchase Thursday at 10am for $60.00.

Multiple Juno Award winner, Jane Bunnett and her band, Maqueque, take the stage at St. Matthew’s Church on Wednesday, July 12 to present her unique brand of Canadian/Cuban inspired jazz. Bunnett has turned her bands and recordings into showcases for the finest musical talent from Canada, the US and Cuba. She has been nominated for Grammy Awards, numerous Juno Awards, received an Order of Canada, The Queen’s Diamond Jubilee medal, and most recently Ontario’s Premier’s Award for Excellence.

An internationally acclaimed musician, Bunnett is known for her creative integrity, improvisational daring and courageous artistry. Her exploration of Afro-Cuban melodies expresses the universality of music and her ability to embrace  and showcase the rhythms and culture of Cuba has been groundbreaking. She has toured the world bringing her own special sound to numerous JAZZ festivals, displaying her versatility as a tourist, saxophone player and pianist. As an educator, spokesperson and social activist, she remains unafraid to explore uncharted territory in her quest for excellence! Tickets will be $35.00, available for purchase May 18.

A master Hammond B-3 jazz organist and composer who, in a career spanning more than 50 years, has been featured on more than 70 jazz, blues, and rhythm-and-blues recordings, Smith is considered one of the premier purveyors of funk/soul jazz.

An unparalleled musician, composer, performer, and recording artist he has been hailed as a “Legend,” a “Living Musical Icon,” and as the most creative jazz organist by a slew of music publications. Jazz Times magazine describes him as, “a riddle wrapped in an enigma wrapped in a turban!” Always ahead of the curve, it is no surprise Dr. Smith’s fan-base is truly worldwide.

Back in 1969, Downbeat magazine named  Smith “Top Organist” of the year. Since then, he has been no stranger to top awards ceremonies. Between 2003-2014 he was awarded “Organist/Keyboardist of the Year” by the Jazz Journalist Association. The Buffalo Music Hall of Fame and Jazz Organ Fellowship have also inducted Dr. Lonnie, and in 2015 he received the Village Music Legends Award. Last month, he received the NEA Jazz Masters Award. Tickets will be $45.00, available for purchase May 18.

Mark your calendar for Friday, July 14 when Andy Shauf takes the stage at St. Matthew’s. Multi-award winning Toronto-based, Saskatchewan native, Andy Shauf is a singer-songwriter and multi-instrumentalist including clarinet and graduated cylinder.

Shauf  released his critically acclaimed debut album, Darker Days, in 2009, and followed up with a burst of creativity, including the EPs Waiting for the Sun to Leave (2010) and Sam Jones Feeds His Demons (2012). He released the album The Bearer of Bad News in 2012. In 2015, Shauf’s single “Jenny Come Home” became a breakthrough hit on Canadian radio, charting on both CBC Radio 2’s Radio 2 Top 20 and CBC Radio 3.

After returning from a European tour opening for The Lumineers, his album, The Party, was released in May 2016. Shauf plays almost all of the instruments on the album himself, recording the tracks sequentially. His song, “Wendell Walker,” was shortlisted for the 2016 SOCAN Songwriting Prize. and The Party was a shortlisted finalist for the 2016 Polaris Music Prize. Tickets will be $35.00.

Montreal native, Toronto-based Joe Sealy is slated to perform on stage at St. Matthew’s on Saturday, July 15. Sealy has enjoyed a highly successful career as a musician, composer, recording artist and radio broadcaster.  His 1997 Juno Award winning Africville Suite inspired Ron Foley MacDonald of The Halifax Daily News to write, “This may be the most important jazz album released in Canada this year.” Sealy has presented “The Africville Suite” in concert venues and at music festivals across Canada as well as Denmark, Norway and the US to universal critical acclaim.

As a pianist, he toured with “Blood Sweat and Tears” and performed with such artists as Joe Williams, Milt Jackson, Veronica Tennant, and Timothy Findlay.  As well, Sealy and his longtime music partner Paul Novotny have created a unique sounding jazz duo. Together they have released four CD’s, achieved two Juno nominations and performed at the Montreal and Toronto jazz festivals.

Sealy was the music director of the acclaimed “Tonya Lee Williams Gospel Jubilee” television special and several CBC radio specials including “East Coasting” and “Viola Desmond.”  Tickets will be available for purchase May 18 for $35.00.

2017 TD Halifax Jazz Festival PASSES go on sale TODAY, May 16 at 10am AST.  Purchase Standard Pass for $129 or Fusion Pass for $229 online at halifaxjazzfestival.ca and at etixnow.com. The Fusion Pass provides unlimited access to all shows at the Festival. The Standard Pass provides access to all shows at the festival, subject to capacity. (Please note, Standard Pass does not guarantee entry; venues are subject to capacity and first, come first served. Fusion pass guarantees entry to all shows, providing front of line access.)

TICKETS for Anderson .Paak & The Free Nationals and the St. Matthew’s Church series shows go on sale Thursday, May 18, 2017 @ 10am AST. Tickets will be available for purchase at the etixnow kiosks in the Halifax Forum (2901 Windsor Street) and Music Nova Scotia (2169 Gottingen Street) and online Halifaxjazzfestival.etixnow.com, and at etixnow.com. Anderson .Paak & The Free Nationals show is 19+, St. Matthews Church shows are all ages. (Additional fees may apply.)