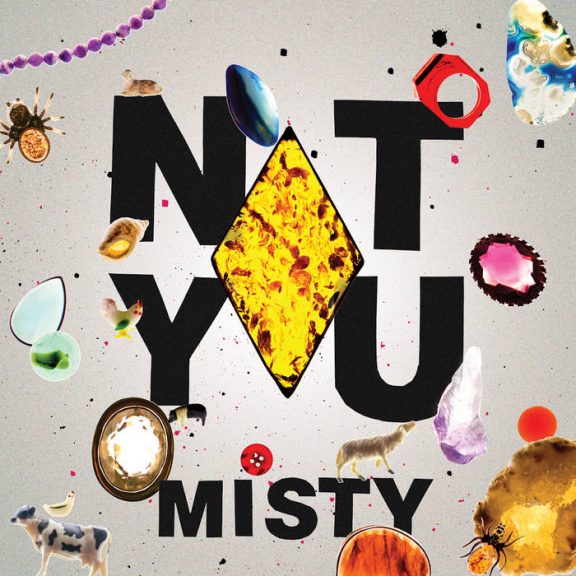 When you sit a child down with a bag of Lego, you can be assured that you will encounter a myriad of ideas that spring forth from their imagination. It all depends on what pieces they combine to form their creation. The Halifax music scene is something of a bag of Lego itself, as bands form and disband at an alarming rate, and sometimes potent forces unite to create something special. It’s that special creation that leads us to the local super-group Not You, which consists of former members of the Burdocks (Nancy Urich – Guitars/Vocals), The Stolen Minks (Stephanie Johns – Guitars/Vocals), Soaking up Jagged (Rebecca Young – Bass/Vocals) and Bad Vibrations (Meg Yoshida – Drums), who have recently released their debut six-song EP Misty.

This EP is fuzzed-out indie pop, that is both layered and complex. The vocal harmonies from Johns and Young provide a sweet contrast to the brooding guitar work that is bubbling away in the background. Production on these tracks is sparse and cool, allowing those harmonies the room they need to float about, as the tempo picks up. I can’t help but draw a comparison to local rockers Like a Motorcycle, but, where LAM doesn’t hold back the intensity on their track “Hands”, Not You’s “Twofour” is the antithesis, as it sweetly seethes instead of unleashing their fury.

Certainly, there have been local albums that are much more accessible during that initial listen, however, Misty requires a few spins to truly reveal itself. Slowly the vocal harmonies and the intricate guitar work will lure you in, and then it will allow you to revel in the juxtaposition of the record as it initially sounds delicate and atmospheric, but you can quickly hear the crunchy guitar backbone that allows for that aural contrast. It goes to show you that with the ideal combination of pieces, magic can be made. Not You’s debut Misty is a challenging listen, and while it may not be everyone’s cup of tea, it absolutely deserves your attention.