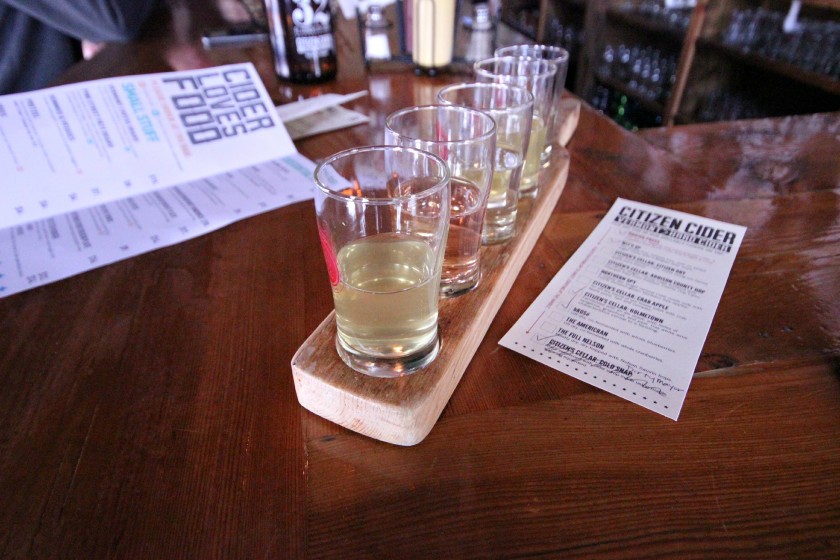 We’ve been talking a lot about Vermont craft beer, but it isn’t the only thing that’s brewing in the state. On our spring tour through Vermont, we stopped into two of Vermont’s cider houses – Citizen Cider and Woodchuck Cider.With a long history of apple production, cider makes sense for Vermont. And at both Citizen and Woodchuck, local apples featured heavily in the lineups. While you’ll find some classic ciders at both stops, those apples are often thrown into odd and interesting combinations. 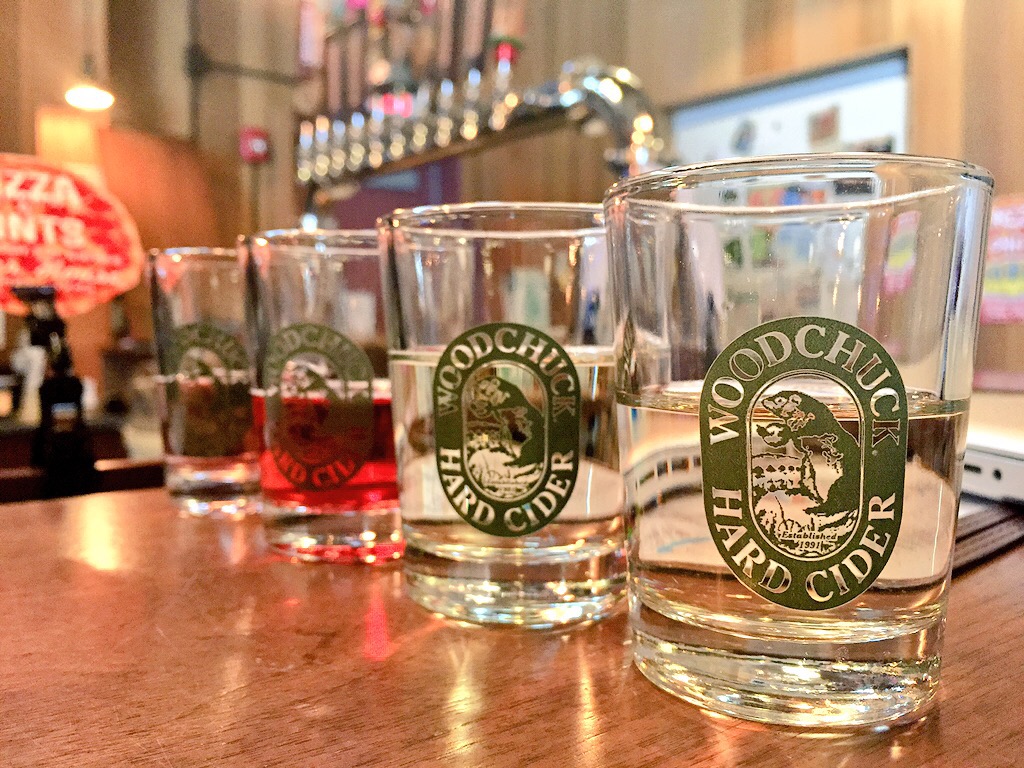 Woodchuck Cider – Middlebury, VT:We stopped into Woodchuck Cider while on the Middlebury Tasting Trail, a five mile, five stop tour of local beer, wine, cider, and spirits. Woodchuck recently opened a new production facility and the space is big, shiny, and welcoming. We saddled up to the tasting bar, where you can order four free 1oz samples. There were more than 24 different types sorted into five categories – Core Ciders, Seasonals, Private/Reserves, Cellar Series, and Out on a Limb. 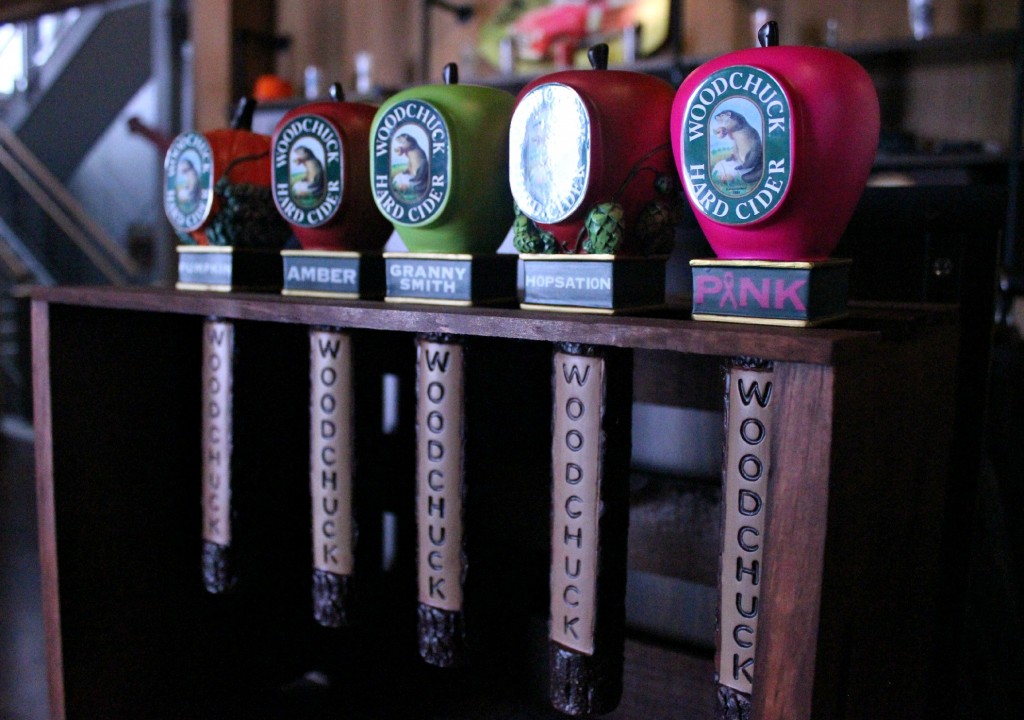 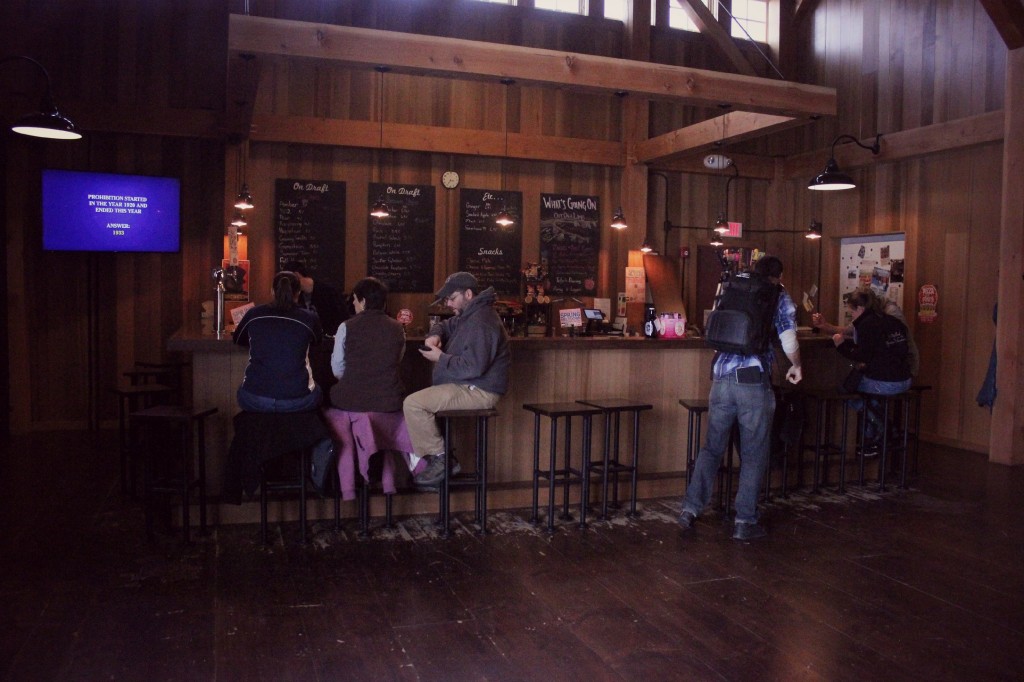 That is to say that choosing four cider isn’t as easy as it sounds. I tried to get a mix of styles, and settled on the Local Nectar, Cheeky Cherry, Ginger, and Hopsation, a cider infused with Cascade hops. I liked the ginger cider and the sour cherry the best, but after trying a bottle that I picked up for home, the “Pink” is my favourite. 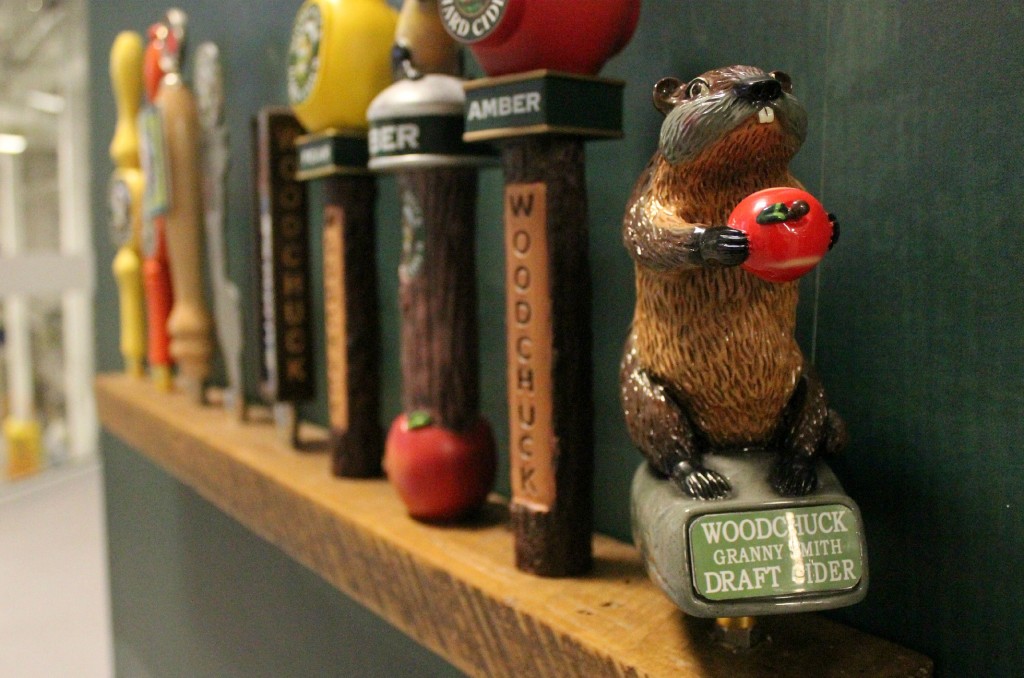 You can pair the cider with a line up of super affordable, mostly local snacks. We ordered a $4 meat and cheese sampler which was made just down the road. 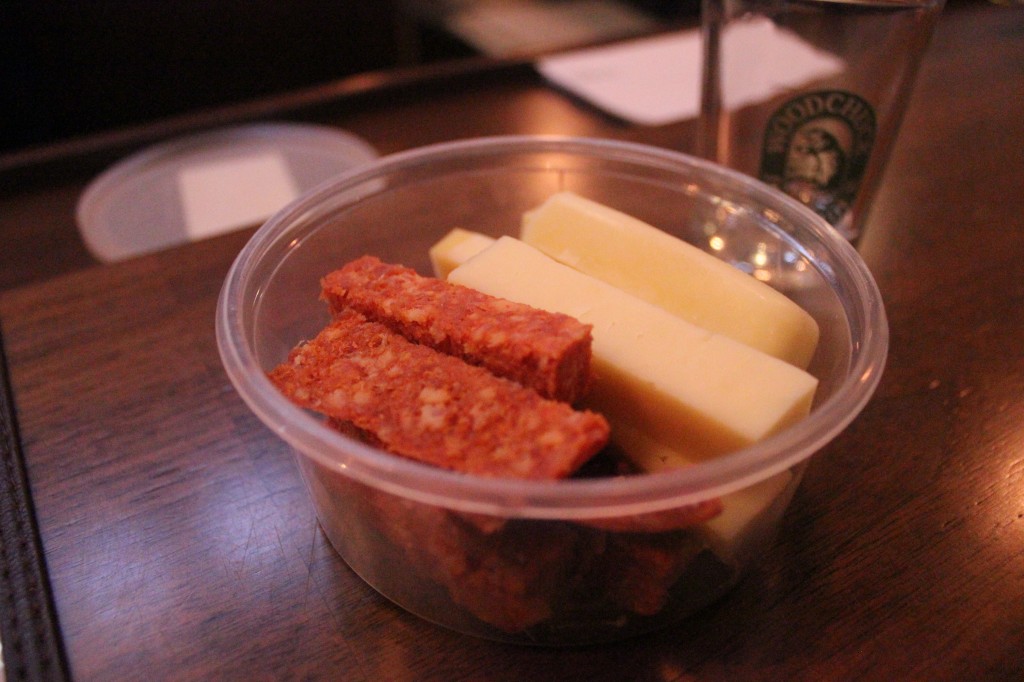 There is a self-guided tour where you can learn more about the history and production of Woodchuck Cider. All-in-all a very fun stop with a great line-up. You can see other stops along the Middlebury Tasting Trail HERE. 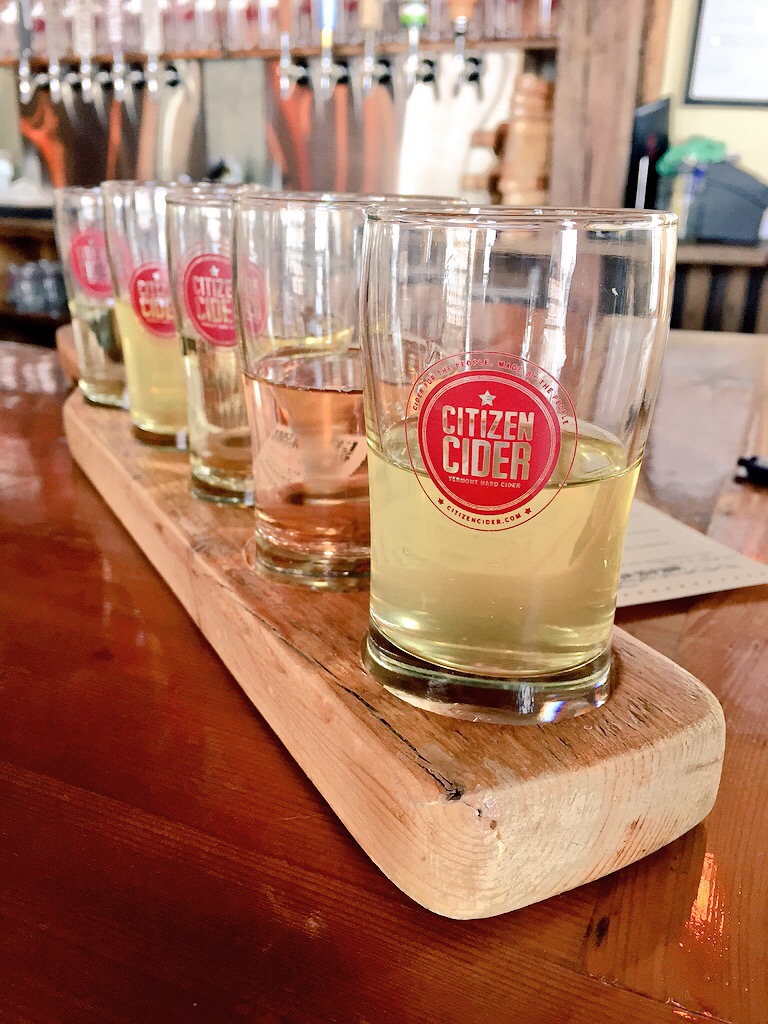 Citizen Cider – Burlington, VT:Citizen Cider is located in Burlington, about a 10 minute walk from the core. It was started by a wine salesman, a chemist, and a small scale farmer searching for something they weren’t regularly getting. They started making cider in 2010, but didn’t sell their first keg until 2012.  By 2013, all three had quit their day jobs to keep up with demand, and by early 2014 they moved production from Essex to Burlington, into their current production space and tap room on Pine Street.

In late 2014, they were named Best Hard Cidery in Vermont at the Seven Daysies Awards. Award winners in each category are determined by the public. Today, they can hardly keep up with demand. 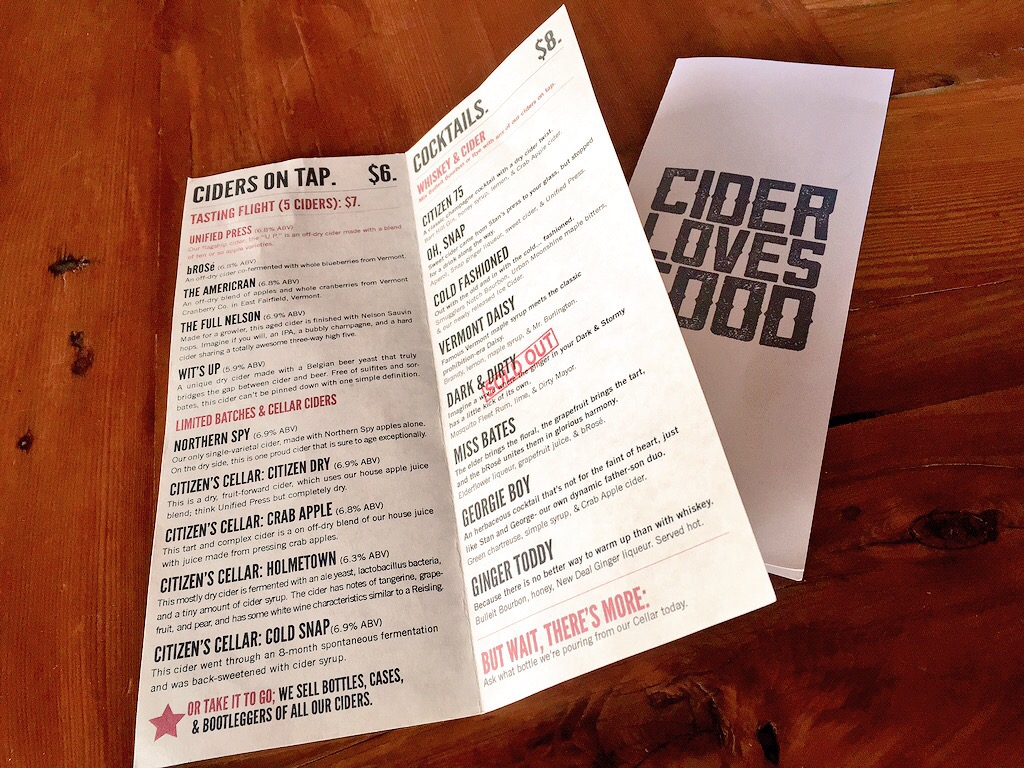 Their ten taps are a curated collection in comparison to the massive line-up at Woodchuck, but those ten taps feature loads of diversity and character. We were on foot, so we tried the whole line-up, with the Ginger once again coming out around the top (NOTE: experiment with more apple & ginger pairings in home-cooking). But our favourite pick was the Rose, a lovely, light, and not-too-sweet blueberry cider brewed with the same yeast used in champagne. We liked Citizen’s cider and site so much that we stopped back in this week to experience the cidery with the glass garage doors that line the tasting room open, turning the whole space into a patio. 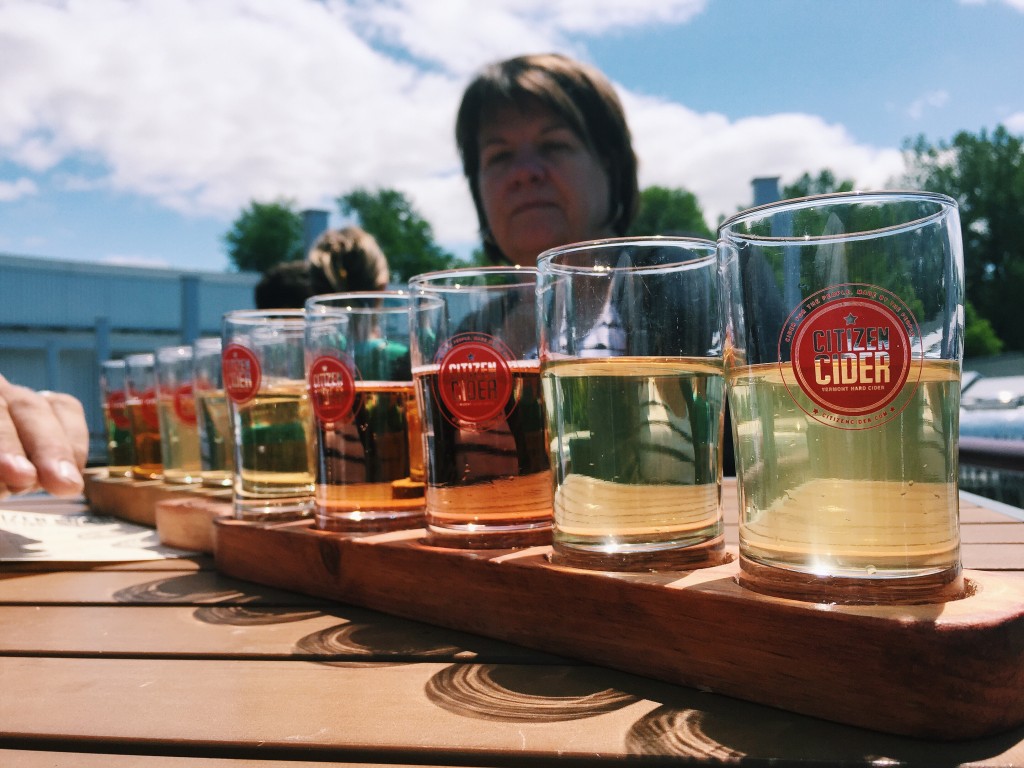 This time we had lunch, enjoying local chicken wings dripping with the tastiest wing sauce any of us had ever had. We soaked up the leftover sauce with the French fries, eschewing any other condiment. A cheese plate with Vermont Brie and blue cheese rounded out our tasty lunch.If you can’t make it to these cider houses, both brands are available extensively on tap throughout Vermont, though you won’t get the selection found in house. They also have take-home options like growlers, cans and bottles to-go.

Post-Script:
Drew was in Oakland last week, where he met a woman from North Carolina who said that Citizen was the best cider she’d ever had, so it can clearly be said that they have a strong nation-wide reputation.