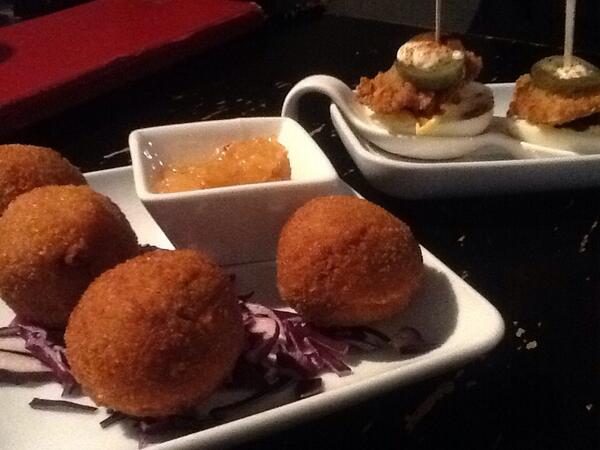 When people think of craft beer in NYC, they often, with good reason, think specifically of Brooklyn. Afterall, Brooklyn’s namesake brewery is a powerhouse in the craft beer world, and the borough across the river boasts hotspots like Torst and the Barcade. However, enthusiasts of good beer would be remiss if they ignore the ales (and lagers) Manhattan has to offer. In our last post, we talked about Chelsea Brewing Company. Today, we’ll take you to 508 GastroBrewery in West Soho.

From Chelsea, we took a very enjoyable stroll along NYC’s second most popular tourist attraction, The Highline (can we pause for a second to take note of the fact that a public green space holds this honour – and the most popular tourist attraction is Central Park). We continued through the West Village along Greenwich Avenue until we reached 508.

508 is the epitome of a Gastropub. It’s one of those hip, trendy narrow lounges with the bar along one side and a row of tables along the other. The décor is artfully done, light, bright and maybe Victorian? What do I know?

We were looking for some food as well as beer, and could not resist an order of their smoked BBQ duck nachos to go with our flight of beer. While devouring it (it was just as good as it sounds), we noticed on 508’s social media channels that they were doing a $39 special with three appetizers paired with a different house beer each. The duck nachos were one of the selections so our server Philip accommodated us by substituting the beer with the flight of samples, and we ordered two more appetizers.

We were there pretty early, about an hour before the special was set to begin, so the kitchen were not prepped to make our first two choices. The ones we did get (as in, our third and fourth choices) were so good we don’t even remember what we originally asked for. We got the Roasted Pork and Yucca Croquettes, breaded balls of sweet roasted pork with a spicy pineapple dipping sauce. The other appetizer was the “Double Diablo” w/ Crispy Oyster, a jalapeno slice on a breaded oyster on a deviled egg. Any function that I ever attend from now on that does not have this as a snack will automatically be docked points.

As for their beer, well, let me tell you. 508’s Ry Guy’s Red is phenomenal. It’s a collaboration beer with Ryan McMahon, member of the Brooklyn Brewsers (kinda like our Brewnosers). His Homebrew moniker is “Ry Guy”, hence the beer name Ry Guy Red. I loved it.

Not to be outdone, the rest of the samples included the Big Alice Alcoholiday graf (a half beer half cider made with Massachusetts apples), the Auburn Hunger (an amber beer with nice caramel malts that went great with the duck nachos), the Binary Belgian (a dubbel that Gillian, who normally doesn’t care for Belgian styles, even enjoyed), the Coffee & Donut Stout (that actually does taste like donut) and the Lexx 790 (a barley wine that made for a great after-meal sipper at 9.4%).

508’s brewer is Chris Cuzme and their executive chef is Jennifer Lynn Hill, and the pair have done a very good job of giving their customers an exceptional gastro experience. Our one disappointment was that we couldn’t get bottles to-go!

Big Alice Alcoholiday 8.8%
This is a graf (part cider) w/Mass apple juice. The cider really smoothness out the bitterness of the beer without losing any of its hop flavour. The nose is all apple. I like it.

Binary Belgian (7%)
A dubbel with a really strong, sweet aroma, the one of us who doesn’t normally like Belgians likes this one.

Coffee & Donut Stout (6.7%)
Has a bit of a sharpness. It actually does taste like a donut. It’s good.