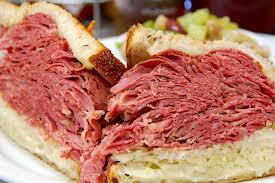 When @GillianWesleyNS and I were first dating, she was a vegetarian.  This wasn’t an issue at all, I enjoy many vegetarian dishes, and if I was craving meat I would often just add meat in mine at the end.  But, to be clear, I am very much a meat-eater.  Steaks, sausages, kebabs, pepperoni, burgers, bacon, wings, barbequed, fried, stewed, roasted, beef, pork, poultry, game, you name it, I like it.  And I really like smoked meat.

Halifax Deli is part of the revitalization of Agricola Street that includes Nauss’s Bike Shop, Fresh Prints (@FreshPrintsHali), Local Source Market (@EatLocalSource), Bridge Brewing (@BridgeBrewing), Gus’s Pub (@GusPub) with Ace Burger (@AceBurgerCo) and many more.  It has a classic diner atmosphere with a classic diner menu.  I saw that the smoked meat sandwich (with homecut fries) weighs in at $11.00.  And when I say weighs in, I mean in the heavyweight division. 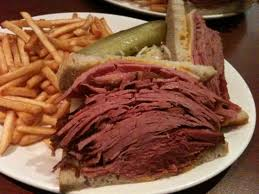 This was hands down the thickest smoked meat sandwich I have ever seen.  I could barely get my hands around it and I’ve been able to palm a basketball since I was 12.  The carnivore in me was bugging out at the mass amount of smoked meat piled between two slice of bread.

Not only does Halifax Deli win quantity bragging rights, but quality, as well.  This was an extraordinarily tasty smoked meat sandwich (as I discovered when I finally found a way to fit it in my mouth).  The homecut fries were equally good, and so was the cole slaw.  Really, this plate could feed two.  Find out for yourselves!