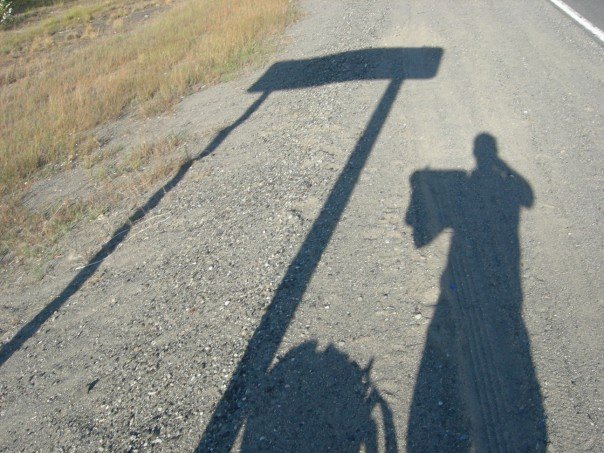 In the summer of 2007, I had two big events planned.  One was my brother’s wedding, in which I was the best man.  The other was to visit my university roommate who I hadn’t seen in about five years. At the time, he was living on Salt Spring Island in British Columbia.  I knew after my brother’s wedding that I wouldn’t be able to afford the flight across the country, so my only recourse was to pack my backpack with my tent, head out to the highway and stick my thumb out.

While I wasn’t new to hitching (or picking up other hitch hikers) at the time, my mother and some of my friends had some reservations about me getting into cars with strangers.  I was much, much more worried about bears since I was going to be sleeping in my tent wherever I ended up each night.  More on this later.

After gathering some last minute supplies (including duct tape, but not including toilet paper), I set out from New Glasgow around 8am.  I had a friend drop me off at the rest stop at Alma where I took a picture of my cardboard “BC” sign and trudged down the exit ramp to the #104.

My first few rides were pretty uneventful.  The first one got me to Debert, then to Sackville, New Brunswick.  Here,  I was picked up by an elderly couple who had their infant granddaughter in the back.  Though I don’t generally have an issue picking up hikers, I think I’d hesitate to put one in the back seat with my infant granddaughter, but, hey, at least I knew I was safe.  The man spent the next hour telling me about their son’s ex who they were taking the baby to see.  Apparently she had a drug addiction and was only allowed supervised visits.  I’m pretty good about carrying on any kind of conversation for a free ride, but I became concerned when he pulled over at their exit at Moncton to continue with his story.  I was getting anxious when he turned off the engine to really focus on telling me all the details (at least he wasn’t idling).  Finally his wife said they had to go (not like I didn’t have to go) and we parted ways.

I got picked up almost as soon as I got back to the highway and hit my first bit of real good luck when an Audi 4 pulled over.  The driver was a crown prosecutor in Toronto who was on his way back from visiting friends in Nova Scotia.  He told me that if I could keep him up and alert we’d drive right through to Toronto.  I was game and away we went.  He was a very cool guy so the time passed quickly, and at 4am he dropped me off in Etobicoke near where my brother lived.

The next day my brother and his friends were going to a bachelor party in Muskoka.  This was good fortune for a few reasons.  First, anyone who has ever hitched knows that it is nearly impossible to hitch out of an urban centre like Toronto (and potentially deadly with those 400 series highways).  This way, I was getting out of southern Ontario with people I knew, in the direction I needed to go to spend a fun day and night in cottage country.  We had a great day of barbequing, beer-drinking and wakeboarding (attempted in my case, see here) and the next morning I got a great breakfast and hit the road again.

Getting through cottage country was stop and go.  No one was really going any kind of distance so I got a lot of short hops.  One car had a bunch of university students who were all going to Dalhousie (go figure).

When I finally got out of cottage country, I was picked up by a girl who was heading to Sudbury for a week before taking the train out to Jasper.  She’d done her share of hitching in the past and insisted on buying me supper from a Tim Horton’s before dropping me off by the Big Nickel outside Sudbury.  This is a great example of the majority of my experiences with hitching.  The people who pick you up are generally people who have hitched themselves, and are eager to pass along the generosity they’ve been shown.

By this point it was getting to be sunset.  I figured I’d be tenting there that night but a van with two guys pulled over who took me up the road to a truck stop where they said I’d be more likely to be picked up.  This also seemed to be where all the Mounties hung out, and though I wasn’t doing anything illegal, I had seen Rambo.  So, just to be safe, seeing as I was a drifter of sorts, I didn’t put my tent up, rolled myself in my tarp like a taco hidden behind a fence and went to sleep.

The next morning I woke at the crack of dawn, rolled up my tarp, brushed my teeth and walked to the side of the road.  Heading out into northern Ontario for the first time was a great way to start off my birthday, and I was in for a couple surprises that day.

Part 2: Hitchhiker’s Hell, the Serb who couldn’t smile and kayaking in the Prairies.

NOTE:  I’m not posting this to encourage others to hitchhike.  I encourage you to do some research into the pros and cons of all of your traveling options and make your own decision.  What I will say, is that I know or know of people who have had bad things happen to them on planes, trains, buses, in cars, cycling and walking.  I really do not consider hitchhiking any more or less safe than any other means of transportation.  Just be smart, be prepared and be alert.  But that goes for everything.