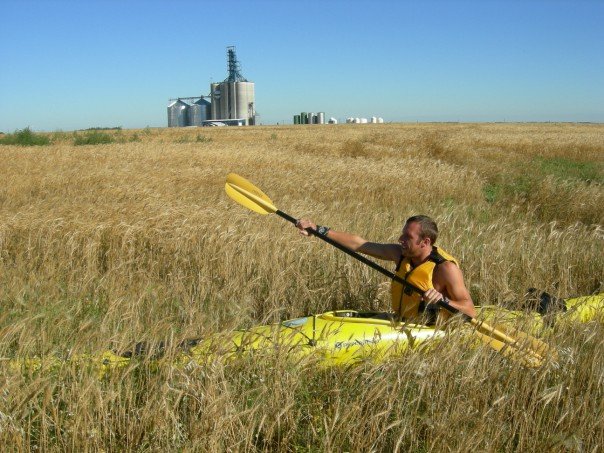 Continued from Hitchhiking Across Canada.

From Sudbury, a couple uneventful rides (the scenery in northern Ontario and along Lake Superior  is incredible) got me to Sault-Ste. Marie.  I had to walk through town here, which was fine because there were some interesting things to see, like a wood statue of a white bison.  It was mid-afternoon when I got to the other side of town.  Looking at my map I saw that the next major centre was Thunder Bay, a good 4 hours away by car, so I figured who ever picked me up would be heading there.  What I didn’t know about was Wawa.

Wawa, Ontario is a small town of about 3000 people that is mostly remarkable for the giant roadside attraction goose.  The guy who picked me up said he’d drop me off at Wawa because it’s a good place to get picked up as it is where the Trans-Canada heading north from Sault-Ste. Marie meets Highway 101 coming west from Ottawa.  That guy straight up lied to me.

There was a lamp post where this guy dropped me off, within sight of the big goose.  On the post someone had written, “How many days will I be in Wawa for?”  At first I thought it must be some teenager wanting to get out of his small town.  Then I realized that this is where the hikers stand and I realized another hiker had written this.  Then I wondered how many days I would be in Wawa for.

Wawa Ontario is, in fact, the worst place to get picked up in all of Canada.  On many Canadian hitchhiking blogs like this one it is know as Hitchhiker’s Hell.  There are legends of people being stuck for days, even weeks on end here.  One claims that a guy chatted up the waitress at the nearby diner and ending up staying and marrying her while another claims that one guy stayed so long he became mayor.

It is easy to understand why it is so easy to get stranded in Wawa once you see it and once you understand the thought processes of a person considering picking up a hiker.  This is how it works.  A driver needs to have enough distance with a clear view to be able to see you, evaluate you, consider picking you up, decide to pick you up, check traffic and then have time to stop.  All of this takes time, which the road that passes by Wawa does not give drivers.  Where I was dropped off there is a sharp turn with high ridges on either side so drivers have no time to even think about picking you up.

I have always been very fortunate in that I have never had to wait more than an hour to get picked up.  Immediately I became worried that this spot might break that streak in a big way.  However, the great big goose came to my rescue.  A Honda SUV came to the T-intersection from Wawa.  On top were two yellow kayaks.  The driver had stopped into Wawa to take pictures of the goose.  So, when he came to a stop, he saw me, read my sign, and rolled down his window.

The driver, Milan, had left Toronto heading for Vancouver Island to go kayaking.  He had never kayaked before, just bought the two kayaks before the trip, along with all the gear and his girlfriend was flying out there to meet him.  When I opened the door, there was a video camera sitting on a tripod pointed at the windshield, bungeed in place with a net of cords.  He was recording his entire trip to the west coast and was planning on doing a time lapse YouTube video.

This was probably the luckiest things that has ever happened to be as a hitchhiker.  From being stranded in Hitchhiker’s Hell I had gone to getting a ride that was going to take me all the way to the Pacific Ocean across five provinces.  The question on both of our minds was, “Would we get along?”  In fact, Milan even verbalized this.  He had never picked up a hiker before, and asked many questions on how it works.  What do we do about gas, food, conversation?

As it turned out, we had nothing to worry about.  Milan was a very interesting guy.  He had been a refugee from the Yugoslavian War, a Serb who had spent some time in the States before taking an IT job in Toronto.  He hated his job and hated the hustle and bustle of Toronto, and during the five days we were together heading west, his tone went from if he’d move to Vancouver Island to when he’d move to Vancouver Island, even though he’d never been there.

That first day we made it to Thunder Bay and headed out to a bar for a pitcher to celebrate my birthday.  Then he parked in a park in the middle of the city and slept on an air mattress on top of all of his gear in the back of his CRV, while I set up my tent hidden from view.

Ontario is by far the widest province to cross, but if you’re heading east to west, you’re rewarded for your traveling with the Lake of the Winds at Kenora.  This lake is really beautiful, and well-used by boating enthusiasts.  Milan wanted to get his kayaks wet, and I wasn’t going to argue so we spent the afternoon kayaking the lake.  This was what Charlie Sheen would call bi-winning.

Finally we had to pull ourselves away from the lake and get back on the road.  We were pretty excited to get to the Prairies, but it was getting dark so we stopped in Brandon, Manitoba for the night.  I guess someone decided I had had too much fun that day, so the skies opened up and I had to set up my tent under a tree, behind a gas station in piss-pouring rain.

Luckily, the rain had stopped during the night and the tree had sheltered me from most of the rain so my tent was pretty dry when I packed it up.  And then, we really got into the Prairies.

Don’t get me wrong, the Prairies are beautiful.  But I’m a coastal kind of guy.  I feel good around hills and water.  Milan felt the same way.  I’ve always thought about getting my hands on those video tapes we were changing every 90 minutes.  It would be a great record of all of our plans to save the world as we fought to stay focused on the road ahead.

Finally, by mid-afternoon, drastic measures were required.  Milan shared with me that he had this photo in mind when he first conceived of this kayaking trek.  I was more than happy to oblige.

After driving for two days across the Prairies, nothing could be more dramatic than seeing the Rockies.  For an hour or two, we weren’t sure what we were seeing.  Were they the Rockies, clouds, a mirage?  When it was finally clear we had the massive mountain range in our sights we whooped and hollered and slapped each other’s backs.  With the view of the Rockies, Milan finally felt comfortable with having a stranger along for the ride, and I convinced him to camp in the Badlands.

Part 3 coming up with bears, cougars and Mounties, oh my, and reaching the Pacific.

Note: I’m not posting this to encourage others to hitchhike.  I encourage you to do some research into the pros and cons of all of your traveling options and make your own decision.  What I will say, is that I know or know of people who have had bad things happen to them on planes, trains, buses, in cars, cycling and walking.  I really do not consider hitchhiking any more or less safe than any other means of transportation.  Just be smart, be prepared and be alert.  But that goes for everything.