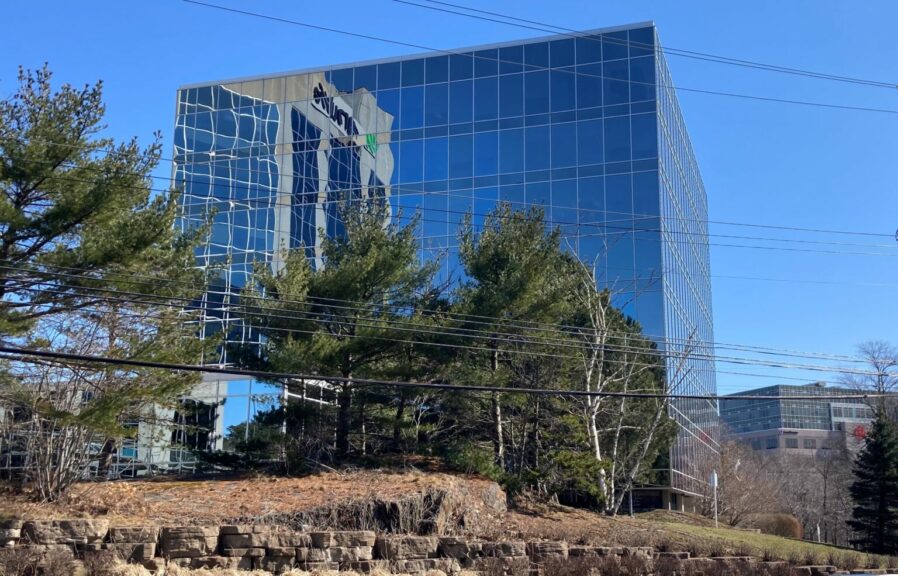 Sheila and I keep a soft-sided mental list of areas around town that would be good to walk. Many of these are districts we drive through but have no reason to experience on foot. Here are notes from one of those rambles.

On a sunny Sunday morning we started with brunch at the atmospheric Armview. After our little journey from rustic Fergusons Cove the restaurant feels like a watchtower at the city gates, overlooking the churn of the Armdale roundabout. We are fans of the Lil’ Greedy, a sampler of several brunch favourites. 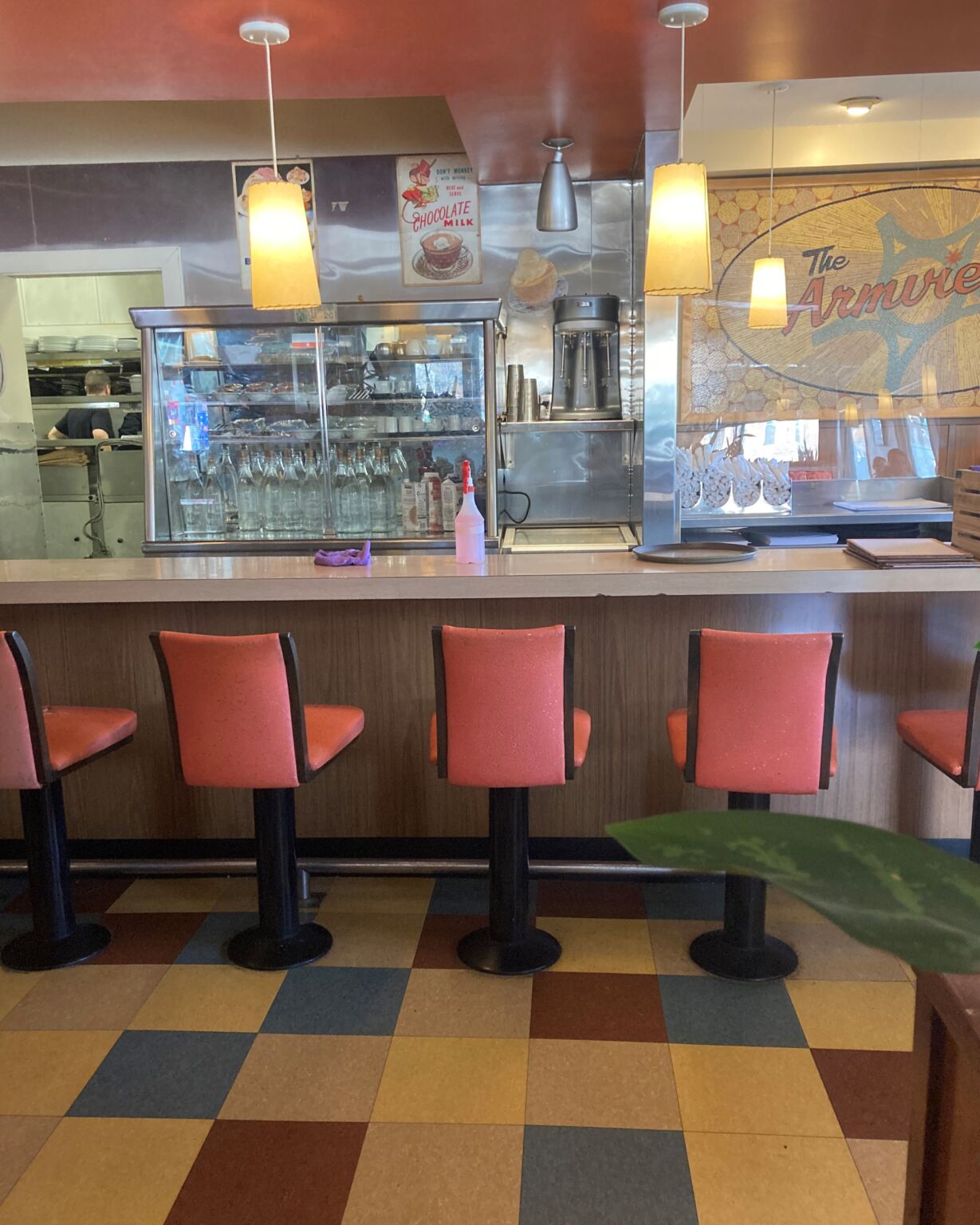 After our tasty meal we started walking up Joe Howe Drive. In 1973 that  reflective cube, the Maritime Life Building, was a landmark. Mirrored glass cladding was new then and usually restricted to urban settings where it reflected the surrounding buildings, good and bad. Maritime Life was set on a large site with mature trees that were reflected in this shiny object “floating” above a grassy berm. Very mysterious, like the buildings in movies that pretend to be the CIA headquarters. 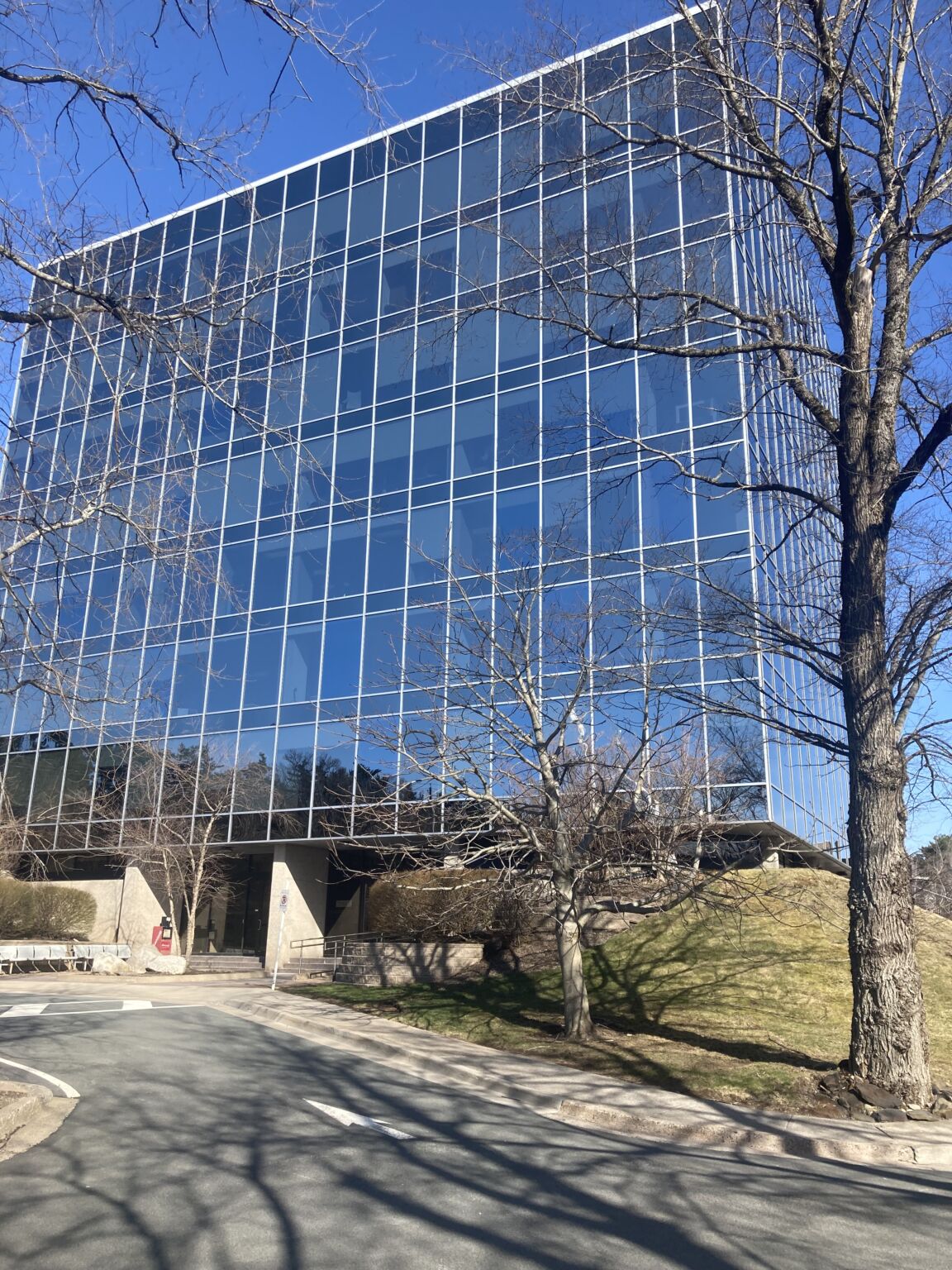 Now that there is a campus of buildings that startling quality is diminished. Venture behind it and you’ll finds a stream flowing towards the Arm, and hints of an older, wilder landscape.

A large, low parking structure tucked out of the way made me realize how the carefully the office towers had been sited, close to the road. All too often similar buildings are set in acres of surface parking. Thanks for your planning, insurance company.

As we left the campus and entered a residential street there was a moment when we observed a swell treehouse in cordial conversation with the parkade. The breezeblock wall felt like an appropriate way to mark the boundary between private and commercial spaces. 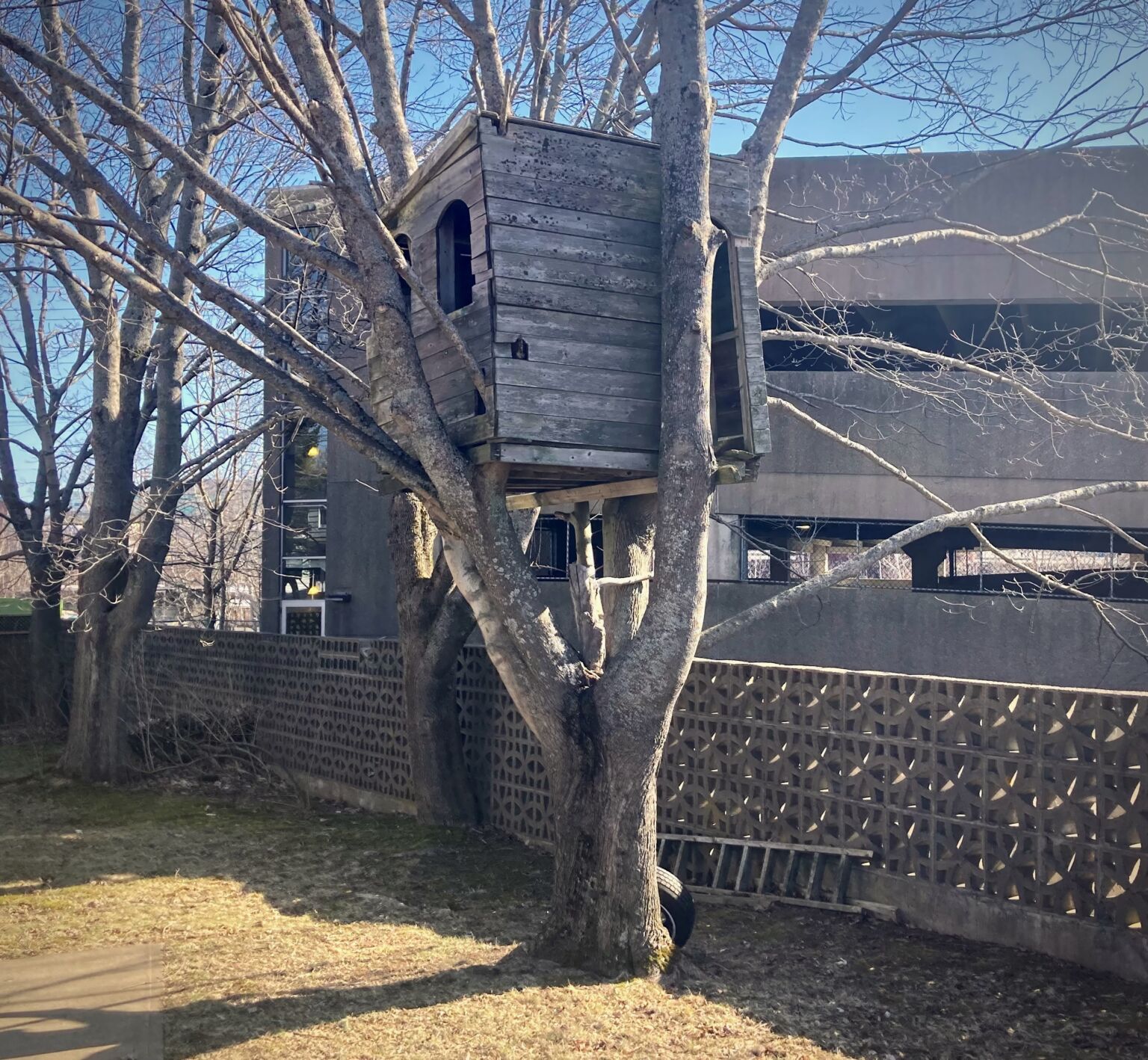 On Mumford a red and white metal awning over a front door made us stop. This was once a popular style, but are they now rare? We have not noticed. Sweet house, too. 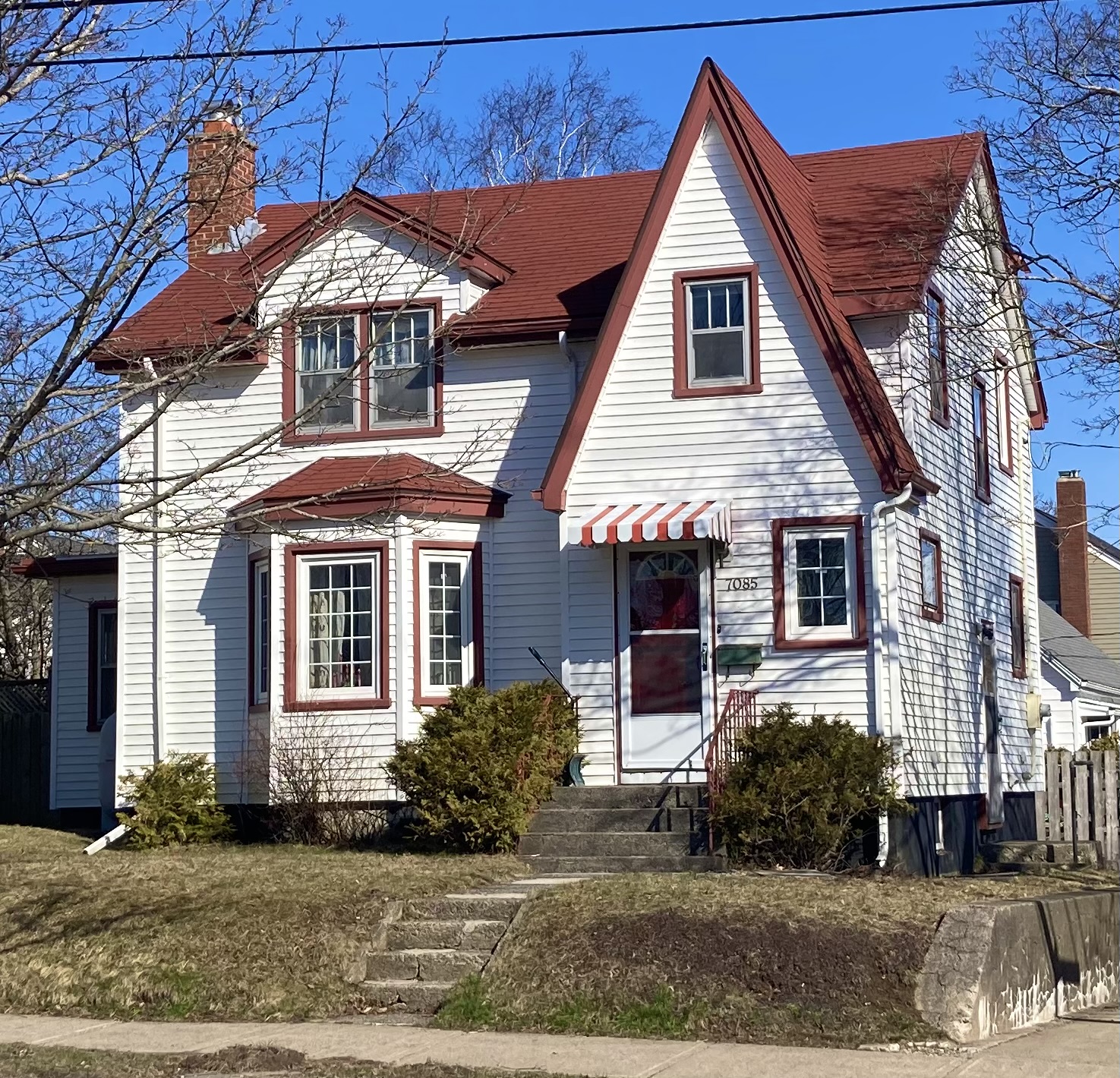 Our return trip began by cutting through Mount Olivet Cemetery. We were not really looking at the monuments but this shiny block of granite brought me to my knees (see, there I am reflected). 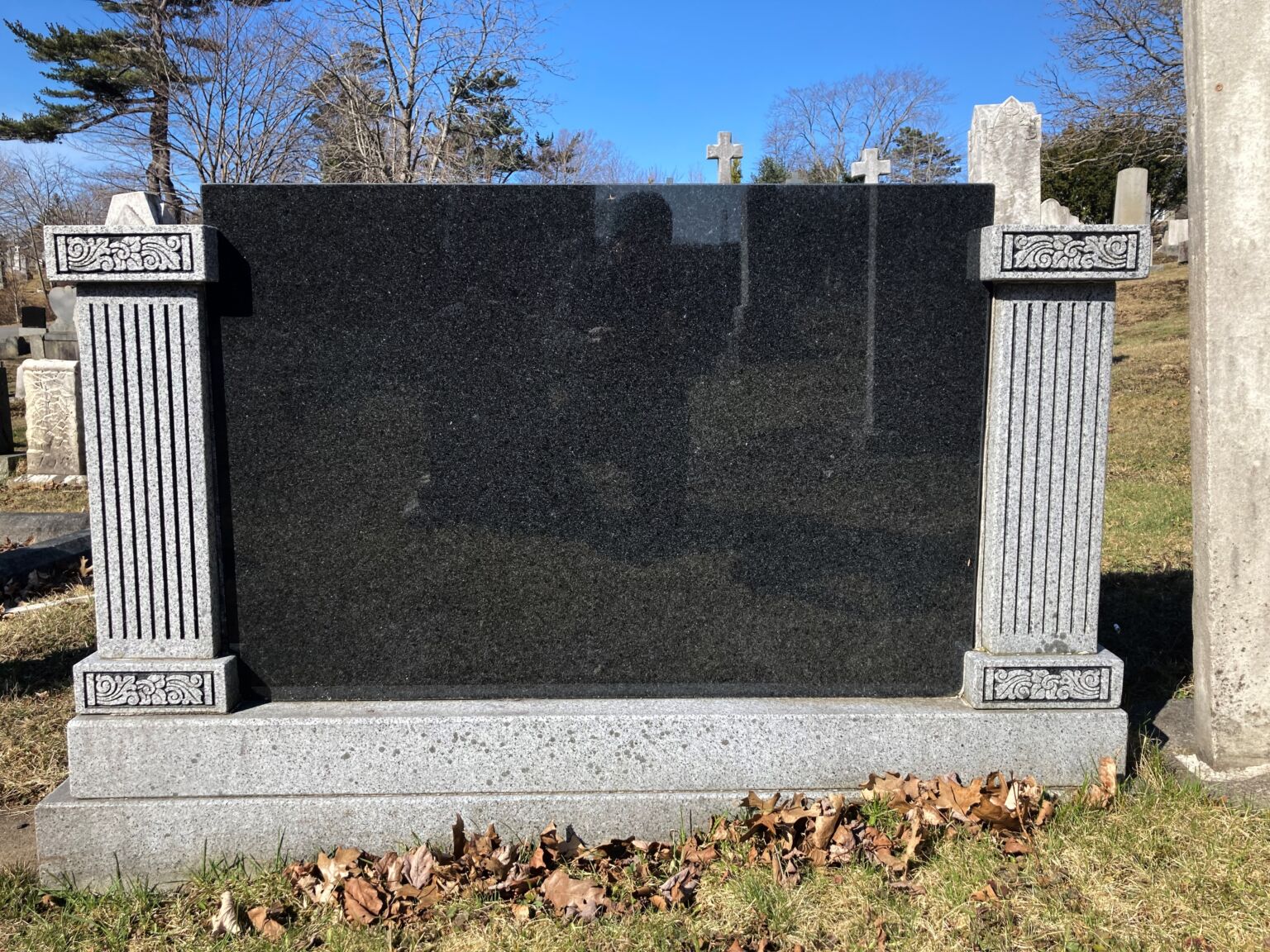 I was picking up a Central American vibe. 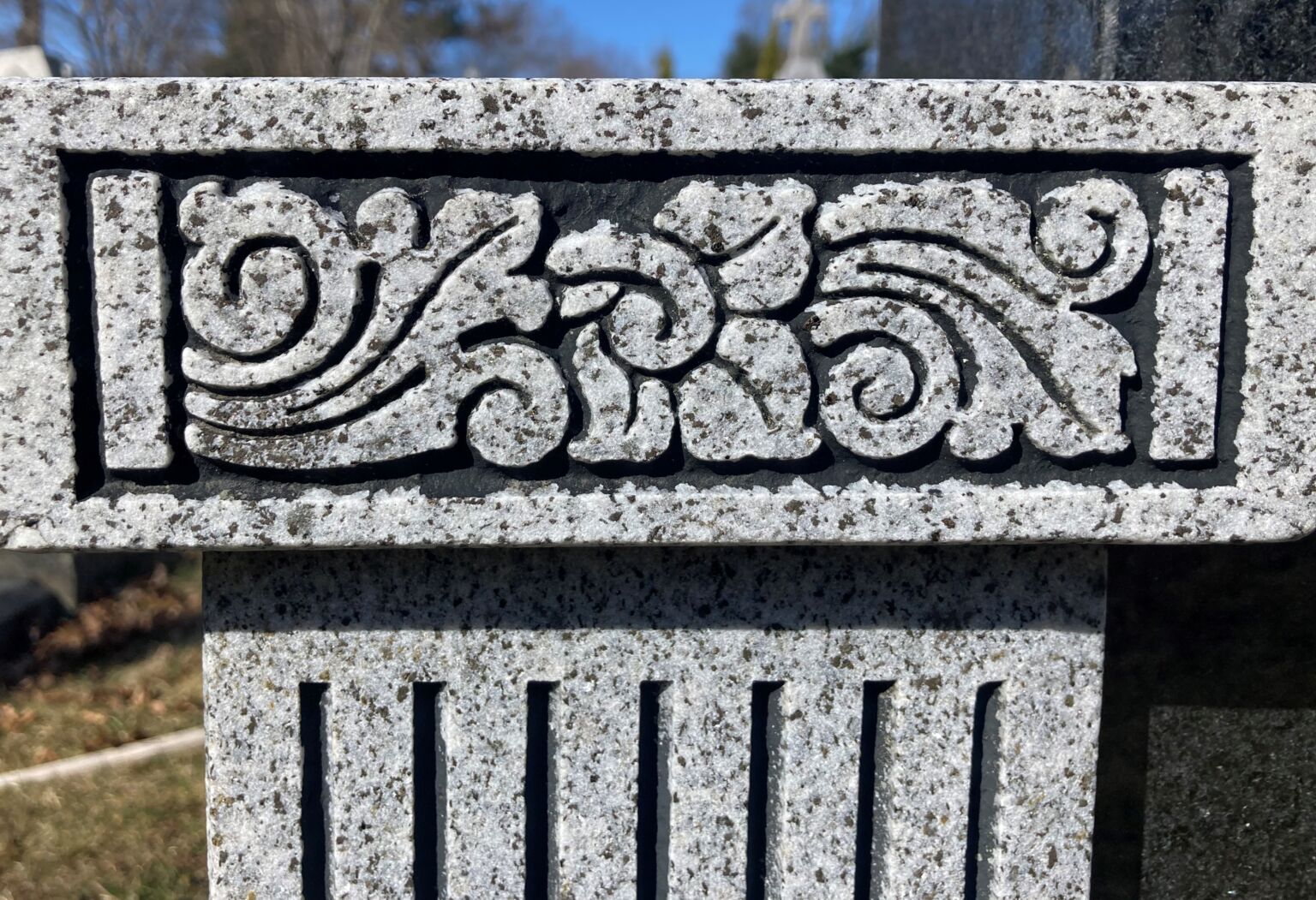 Two streams meet in the cemetery and we realized that remnants of traditional wetlands and water systems abound in this area but have generally been overwhelmed by new development. 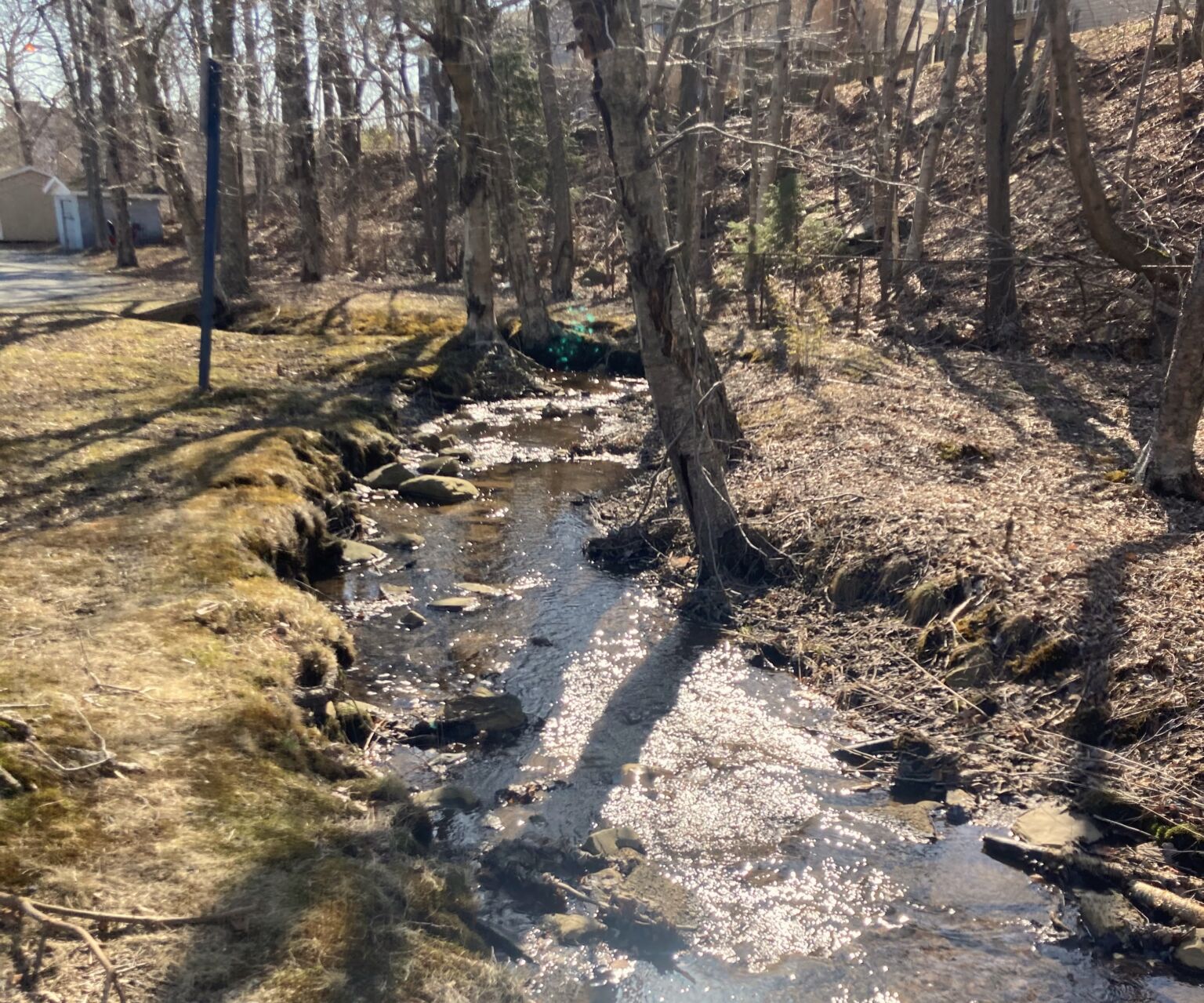 On Springvale Avenue we checked behind The Fairmount condominiums and found that it was built up against a small wetland. This time of year the calls of spring peepers would be a delight, or perhaps torture, for residents. 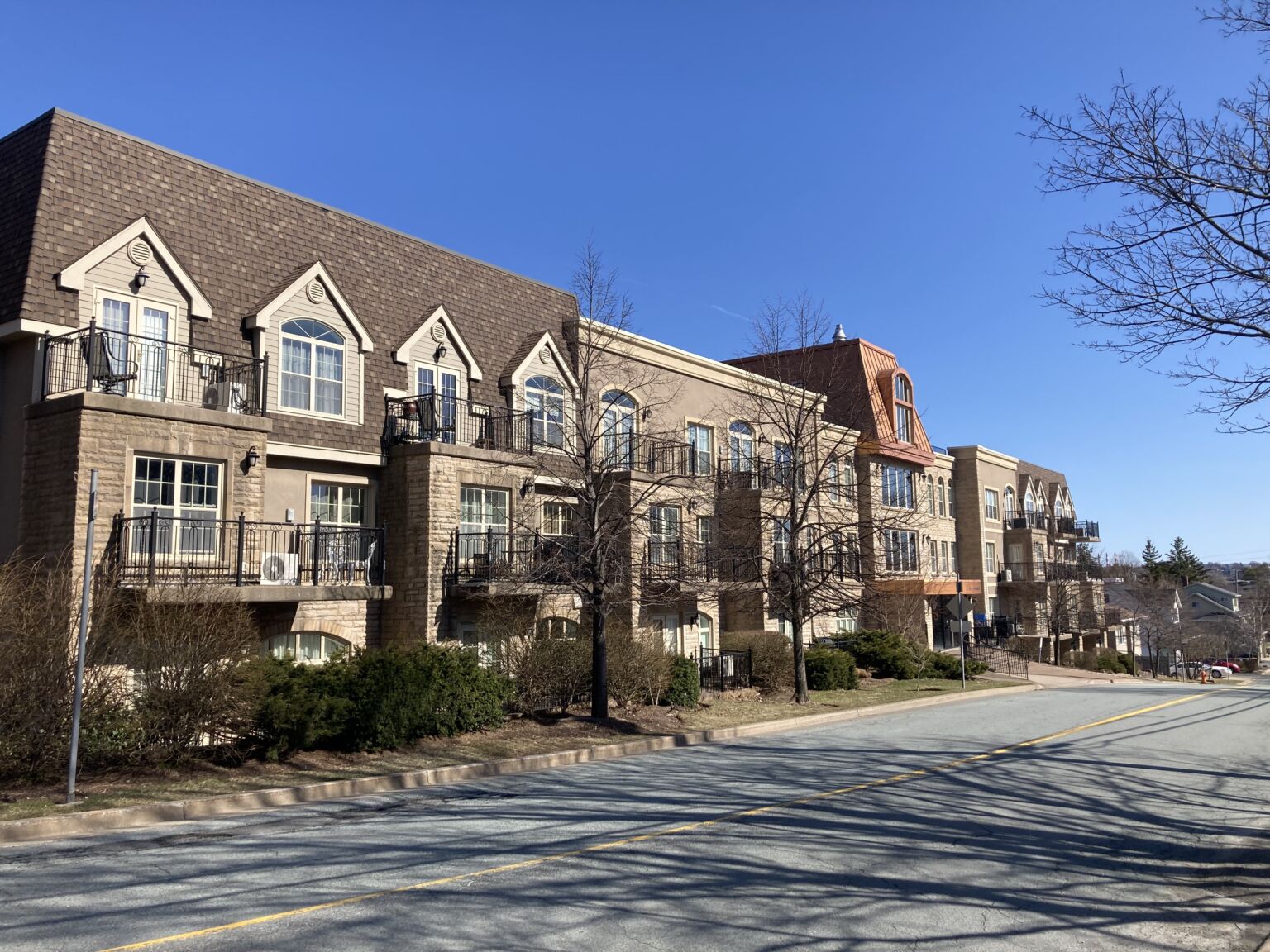 The retro style of the condo building seems to fit into the neighbourhood successfully. I mused that if a 19th century traveler came upon a building with this form on the edge of town they would assume it was an insane asylum or a TB sanatorium. But a nice one. 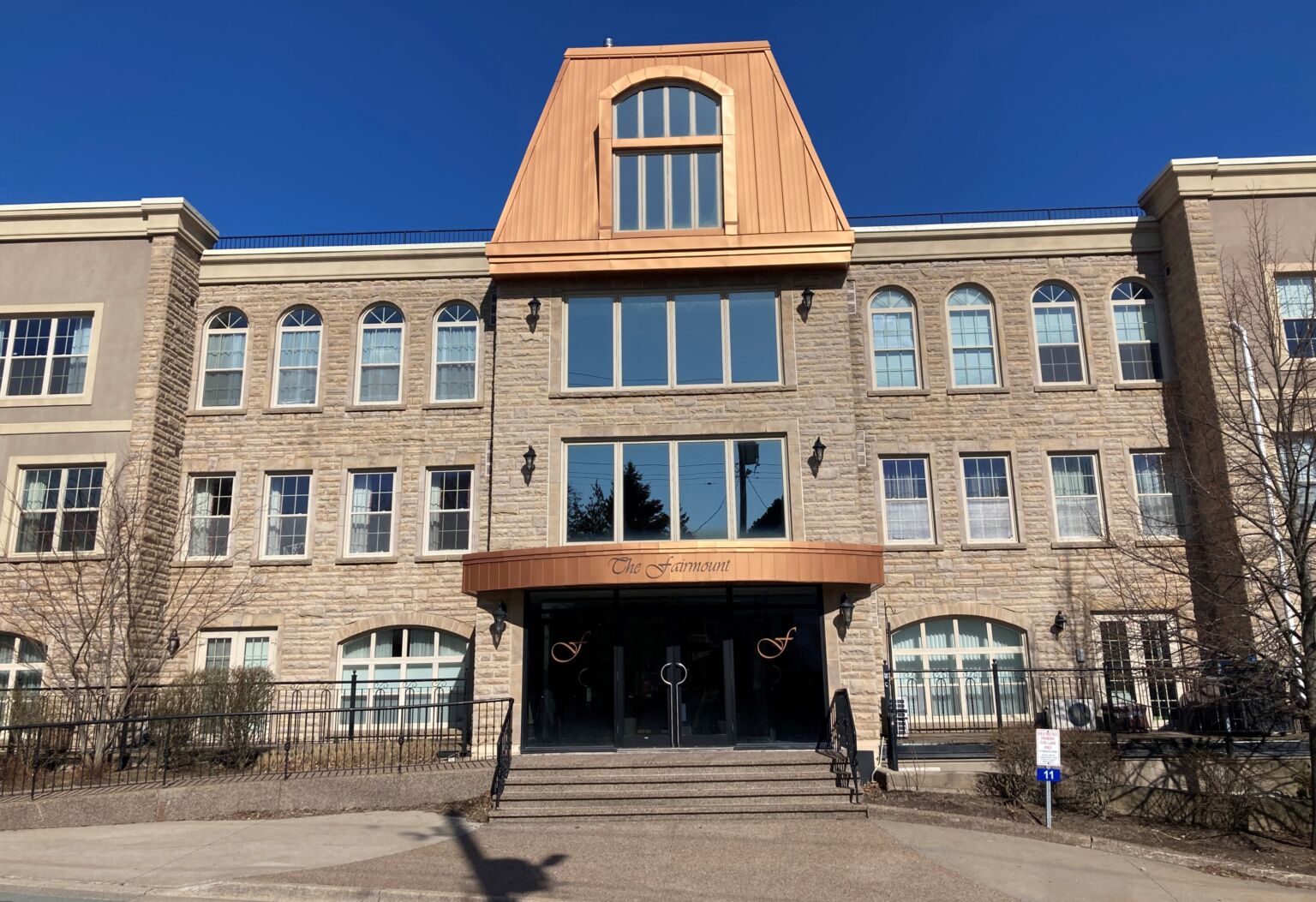 The popular Chain of Lakes Trail runs next to The Fairmount and actually cuts the wetland in two. At the side of the multi-use trail there is a metal sculpture of a rider, shaded by a parasol, on a high wheel bicycle. When I looked up the sculptor, Doris Soley, there were a number of references to her less whimsical piece representing a triumphant meat cleaver-waving Lorena Bobbitt. 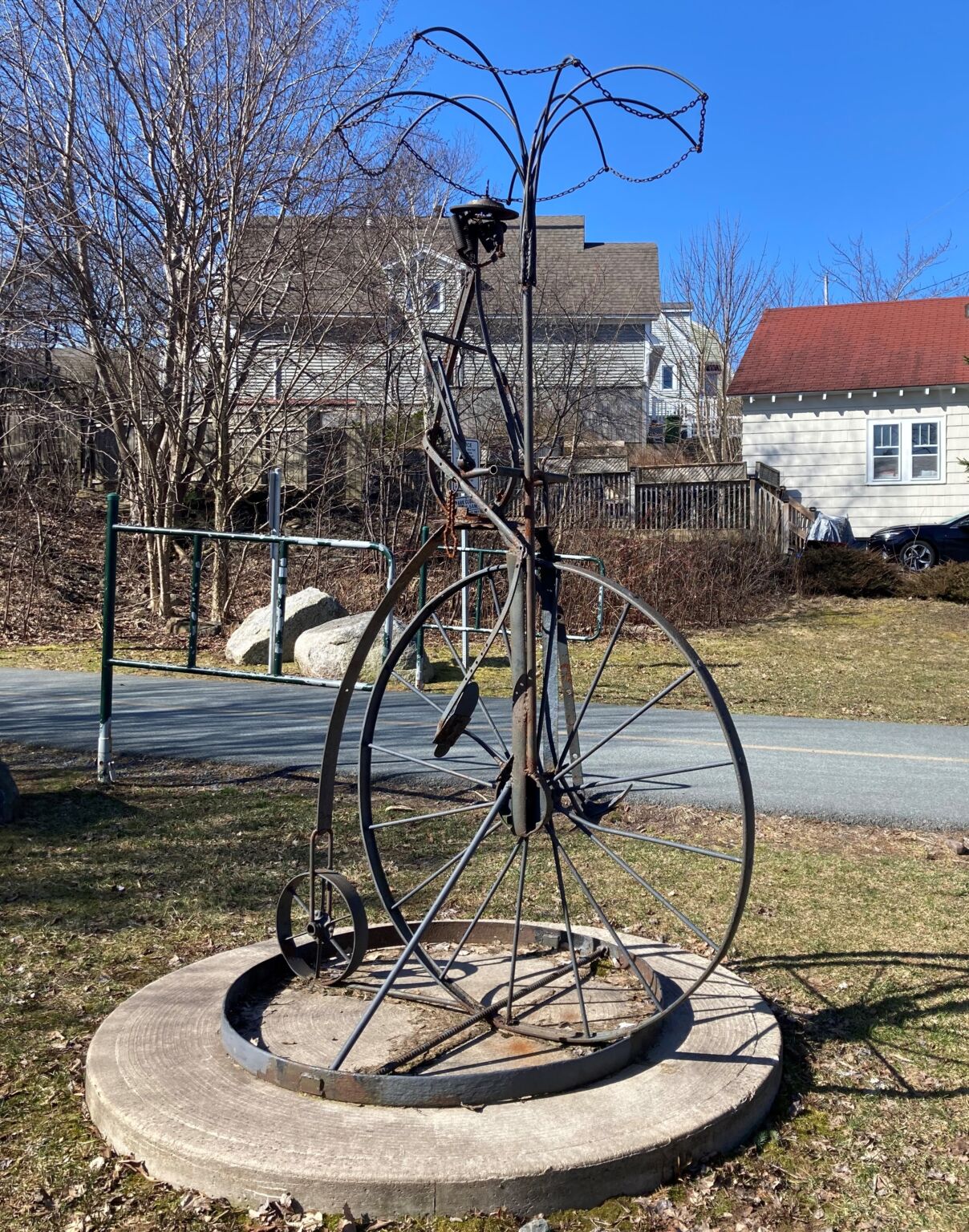 Near the bottom of Joe Howe is the former County of Halifax Municipal Building (built c1960 ) that was no longer required after amalgamation in 1996. I think the shape of the building has remained the same, but the cladding has perhaps been updated? 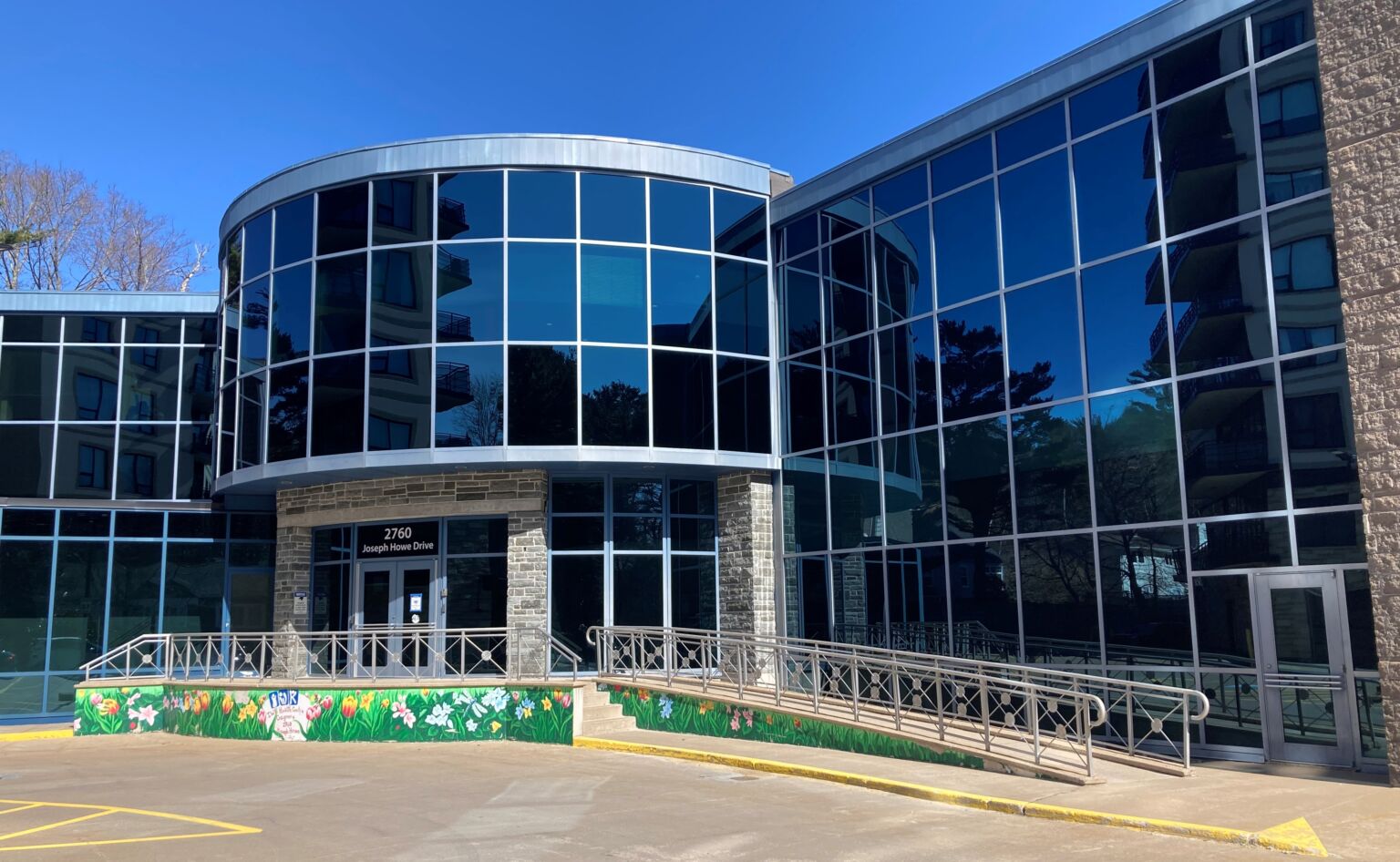 The railing design caught my attention as both simple and classic. Perhaps doesn’t meet code, but let’s not worry. 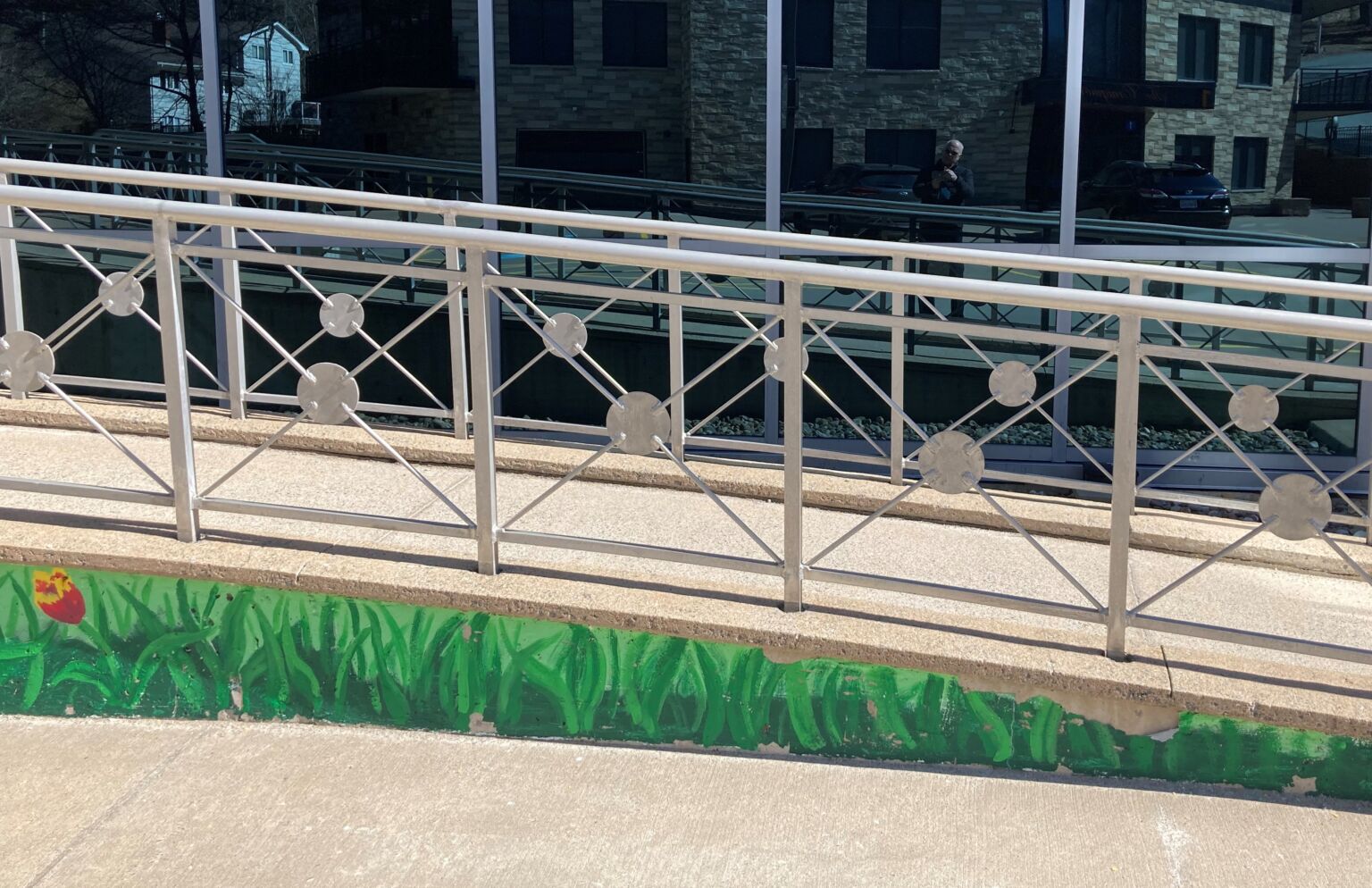 Walking down Joe Howe we delighted in the striking view of the Northwest Arm and the Memorial Tower. What a grand entrance to the city this is. We tend to ignore the splendor because getting through the roundabout alive uses up all our bandwidth. Some of our smart creatives should be able to imagine ways to help us celebrate this sublime three dimensional experience.

A moment too good to miss

Here is a gratuitous suggestion for the immediate future. In 2014 I made a special trip to the Armdale roundabout to snap a picture of the spectacular dandelion bloom. 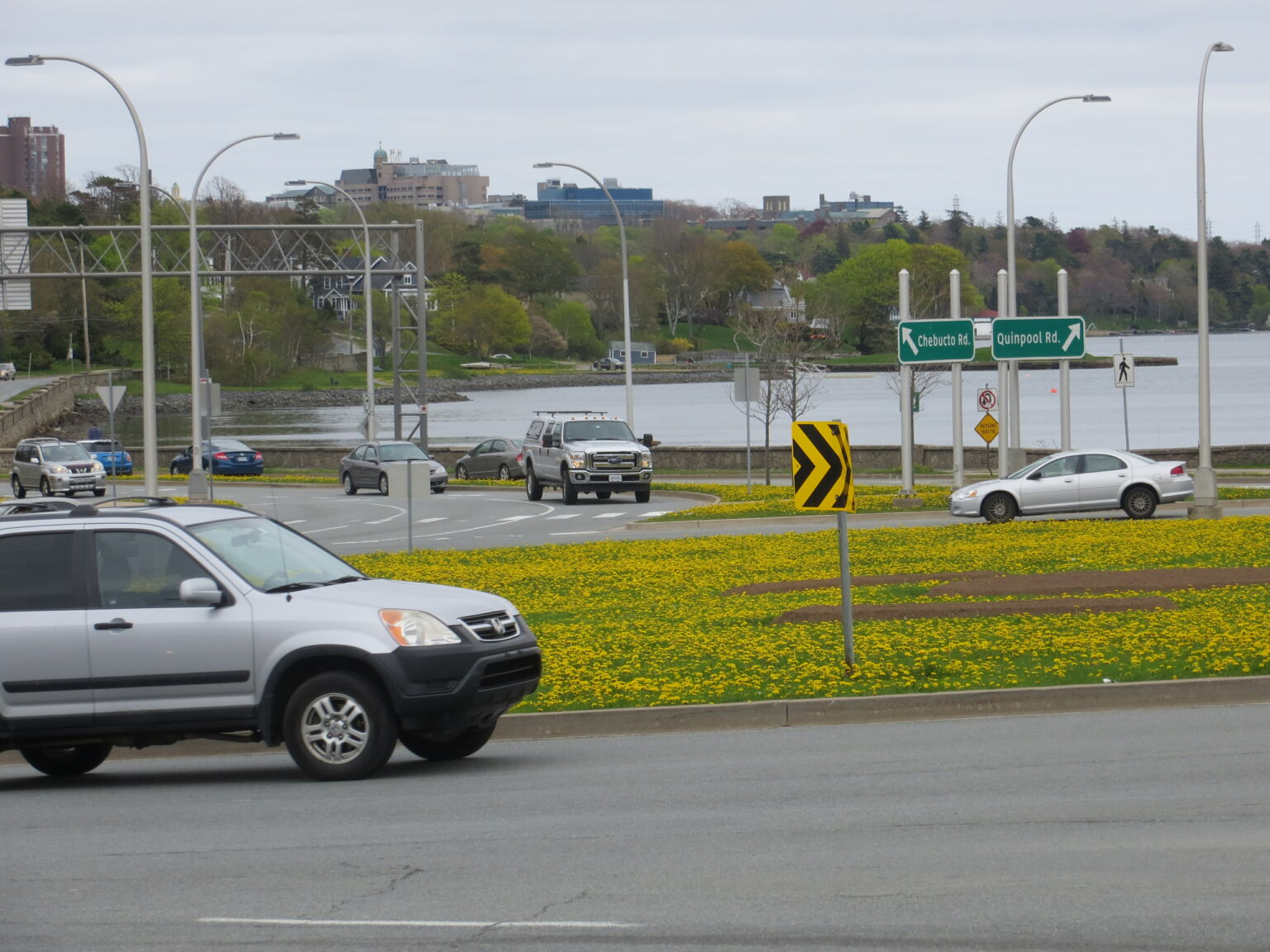 Assuming our little yellow friends are still there, imagine if this year dozens of blue banners were added for a week of their bloom. Even better than the giant blue and yellow flag hanging on the Old Bridge. 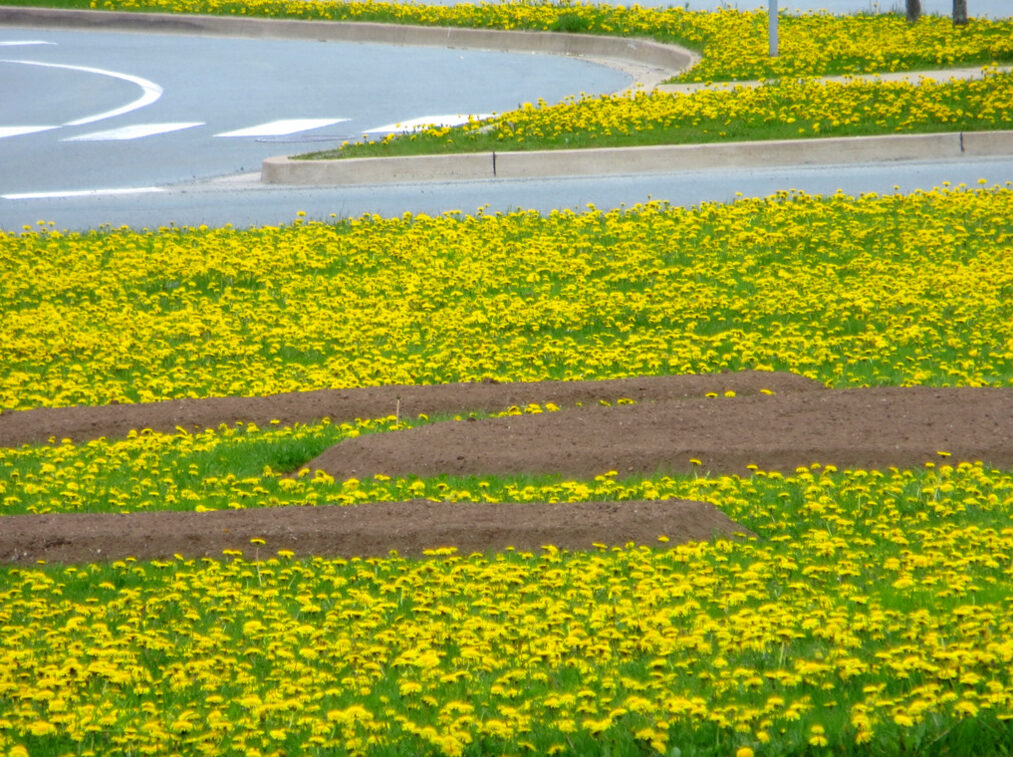 Picture the inspirational drone shot of all that blue and yellow as the sun rises over the Arm on a misty morning. Want to sponsor this?

Here is what the meeting place of the Herring Cove and Saint Margarets Bay Roads looked like c1900. Somewhere beneath the present day roundabout the spirit of this scene still gasps for oxygen. For sure the water from the wetlands we saw up Joe Howe Drive still flow under the thundering traffic, pining for a celebratory stone arched bridge. Times have changed, but surely there must be some way to combine excellent traffic engineering with an elevated sense of place? 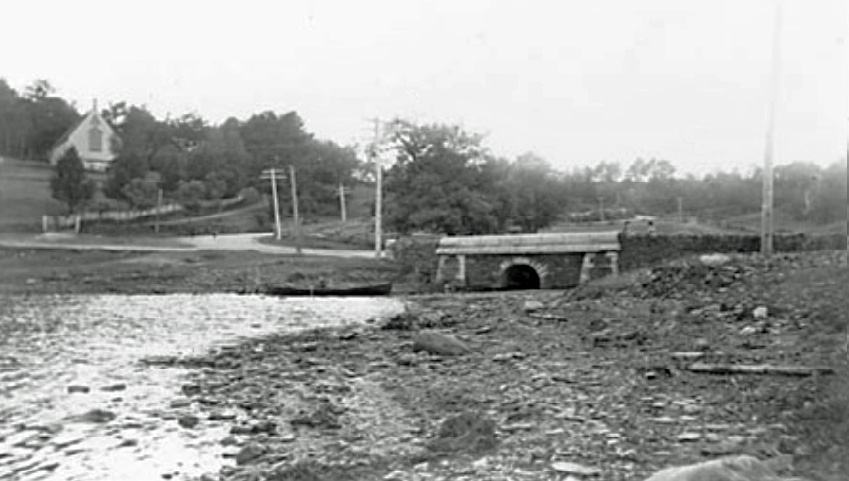