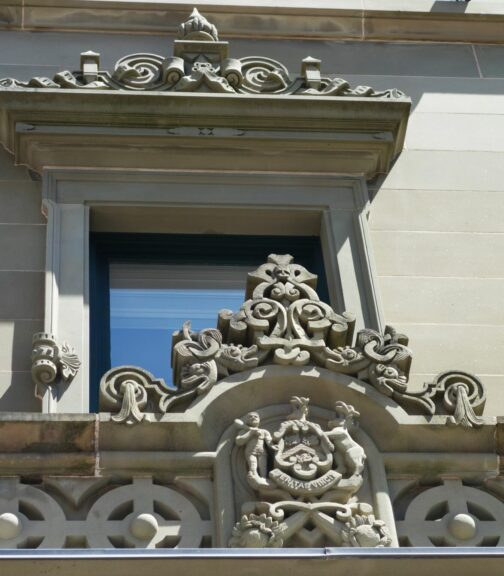 In the 1860s the commercial gentry of Halifax filled the downtown with palaces of business constructed in a style reminiscent of the palazzos of merchant princes of renaissance Florence, Rome or Venice. This flamboyant Italianate style of architecture was a display of wealth and power at a moment of prosperity in the city.

In early May I led a Jane’s Walk along Hollis and Granville Streets to look at surviving examples of this Italianate style. Preparing for the walk encouraged me to take a closer look and learn from buildings I thought I knew. Here are some things I noticed.

Is this really Hollis Street?

A couple of years ago Sheila and I went to the Lieutenant Governor’s Garden Party. Wandering among the shrubs with my cup of tea I noticed there was a grand view of the beautifully restored mansions on the other side of Hollis Street. Keith Hall and the Benjamin Wier House must have felt assertively modern in the 1860s in this district filled with restrained Georgian style residences from an earlier generation. 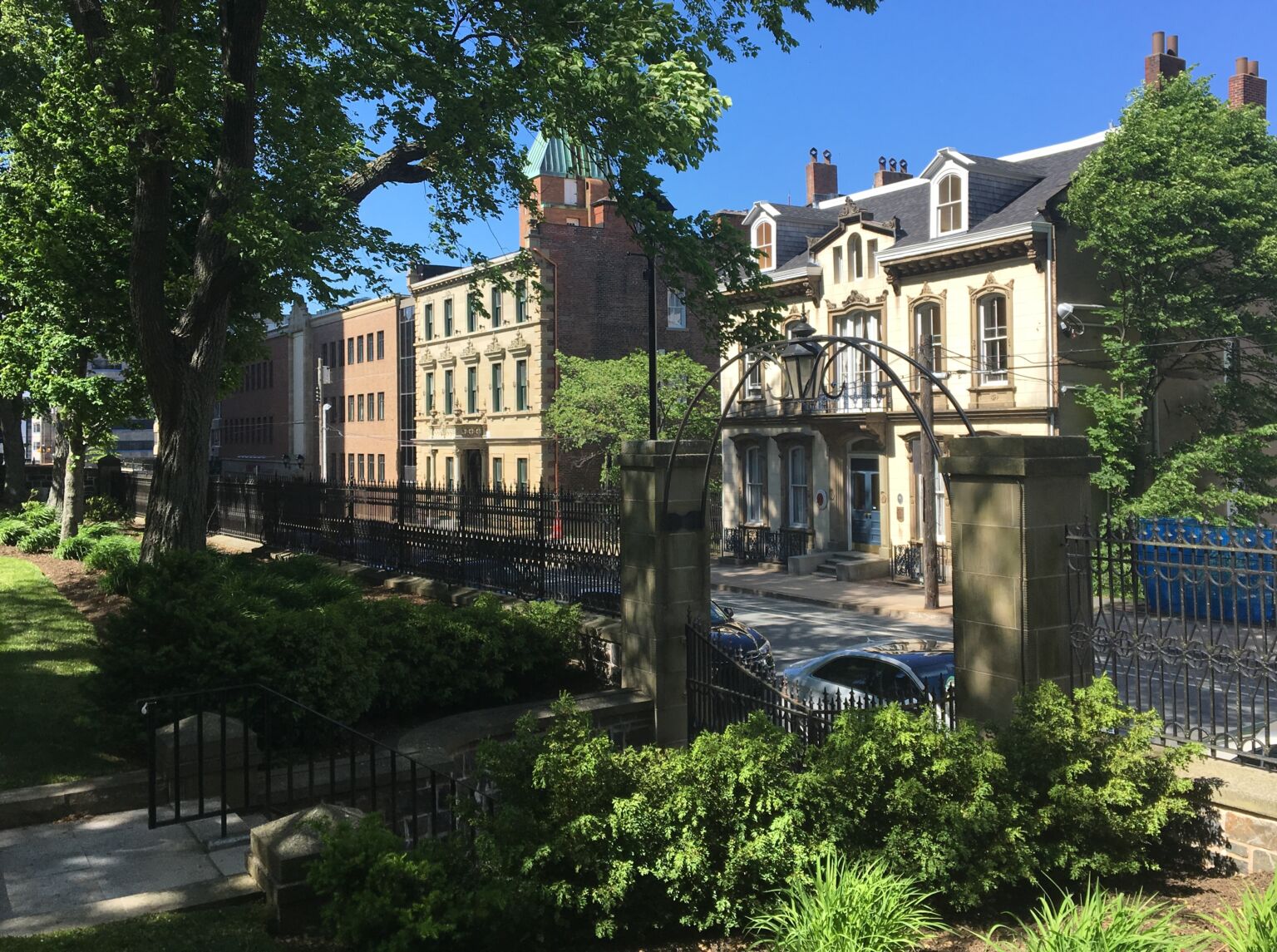 Today the 19th-century Halifax businessman with the most name recognition is Alexander Keith. His soaring grave marker in Camphill Cemetery is often adorned with beer cans that bear his name. Alexander began the construction of his palatial home, Keith Hall, in 1863. 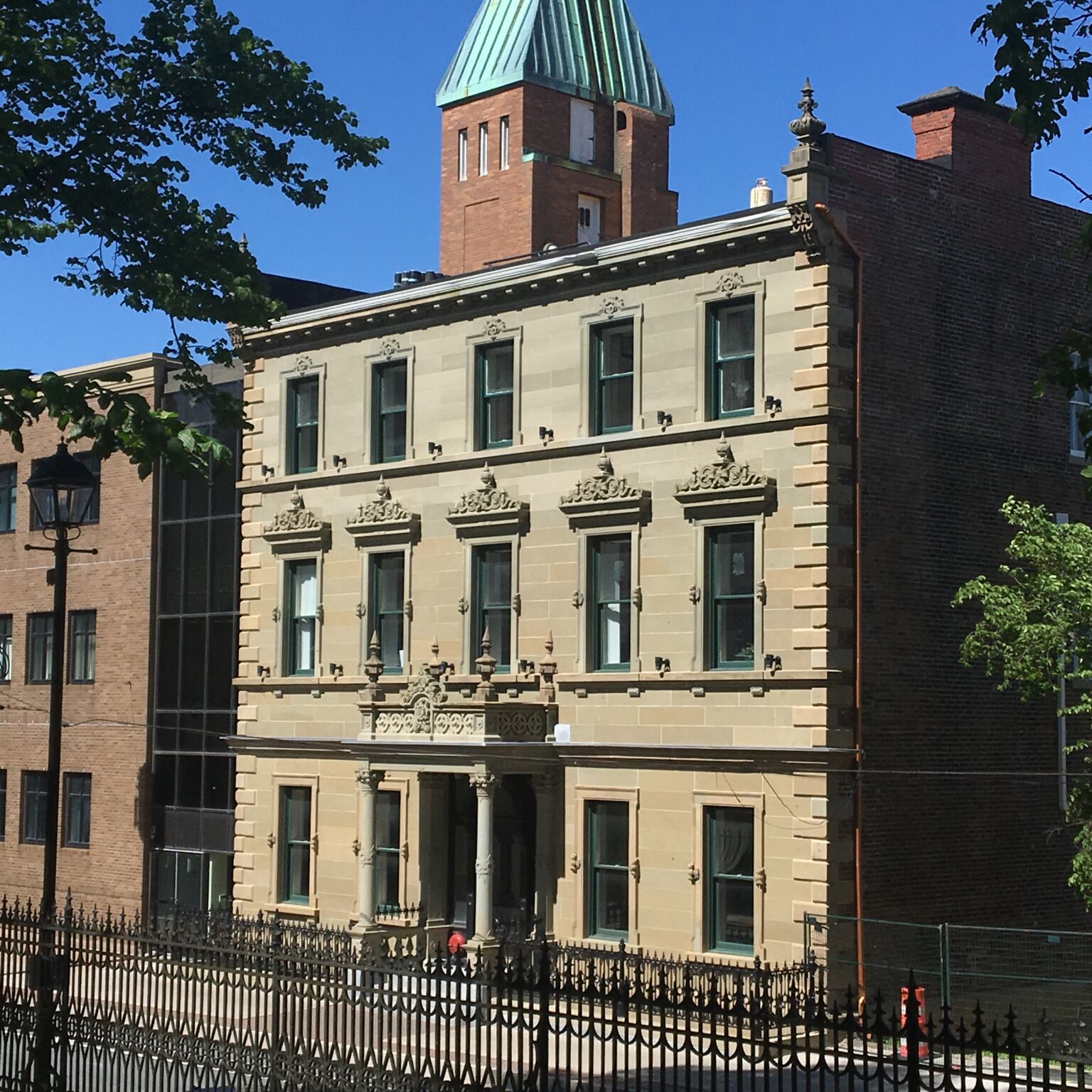 It was the tradition at that time for proprietors to live next to or near their businesses, so Keith’s house was just behind his brewery. Imagine if the present day seafood tycoons lived next to their fish plant, or the country house of the paving company executive had a view of their asphalt plant. In this 19th-century advertisement the tall building back of the brewery perhaps represents Keith Hall, but illustrations of this style can be fanciful. 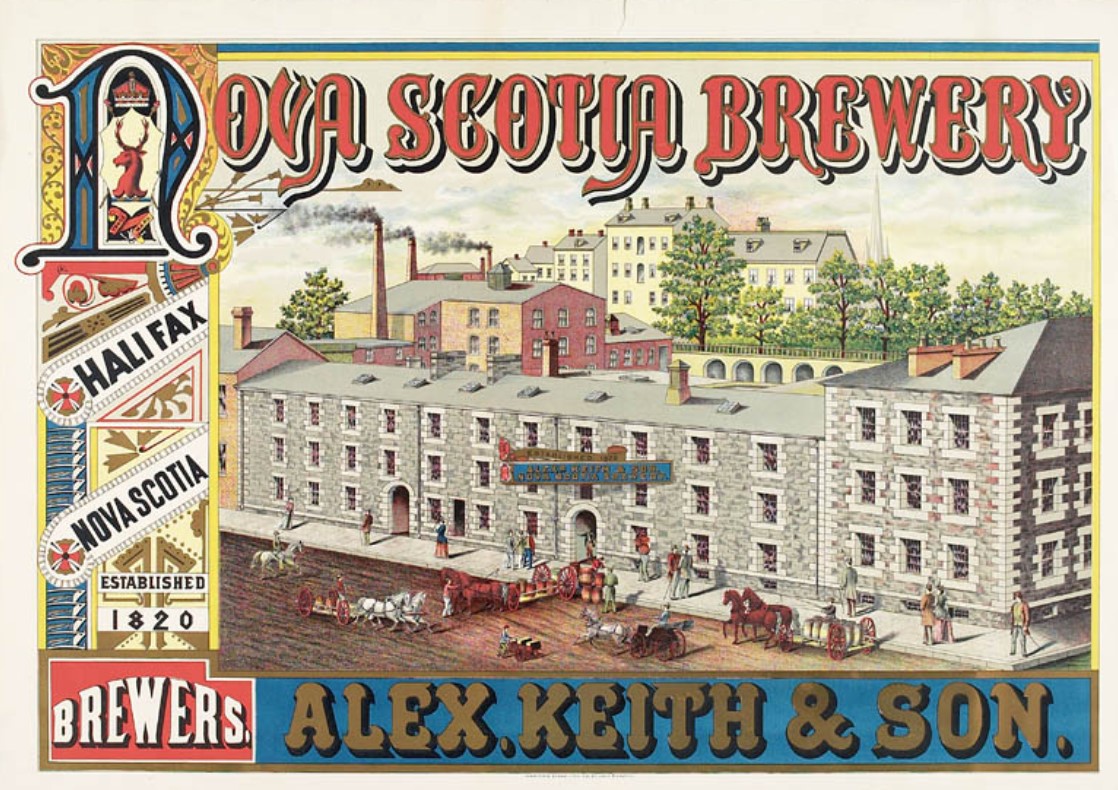 The tall windows, decorated window caps, and ornate entrance portico are characteristic of the Italianate style. 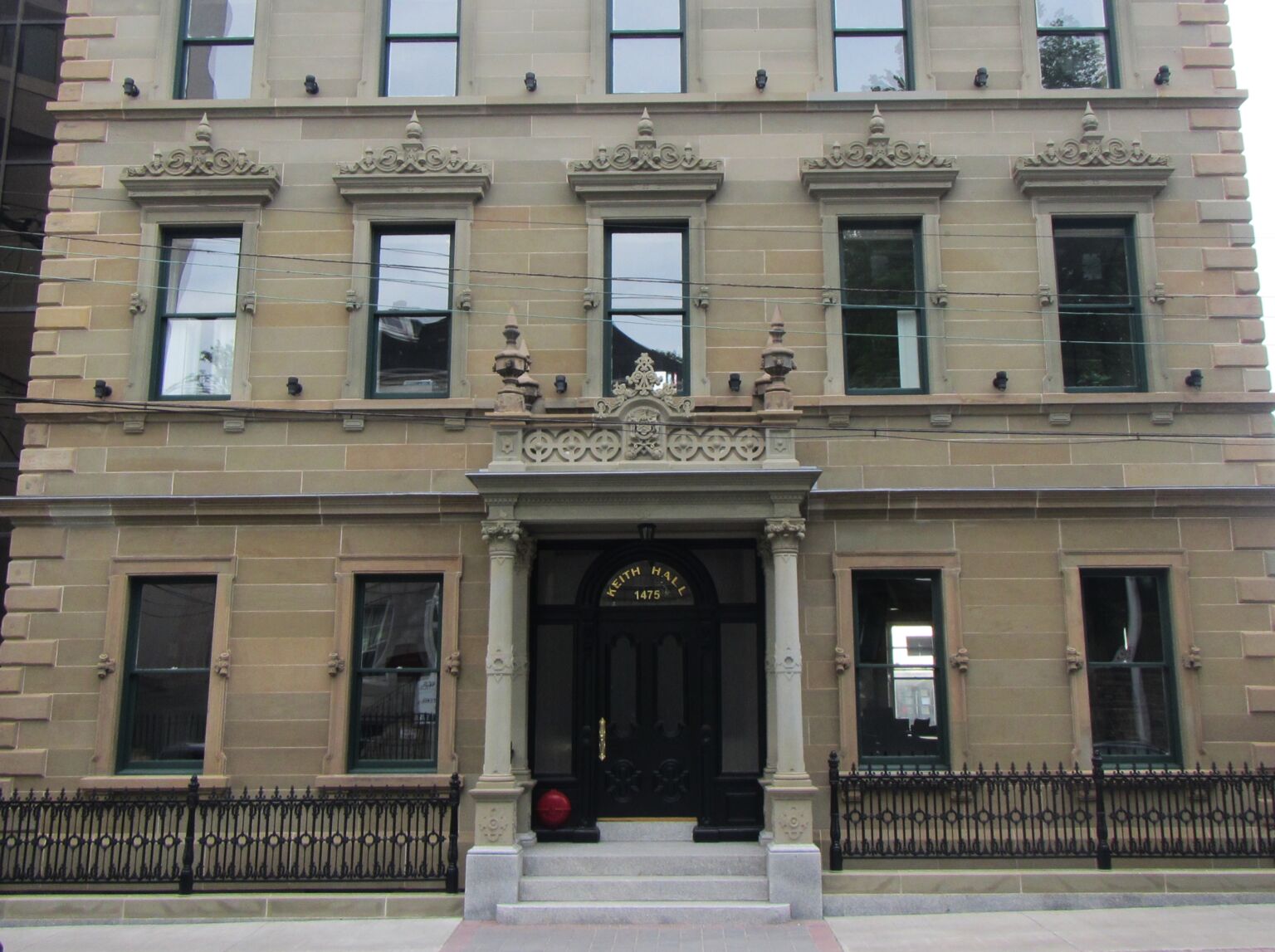 Over the entrance is the Keith coat of arms and above it careful observers will notice four sea monsters chewing the scenery. The coat of arms is Keith signaling a grand ancestry (he trained as a brewer in his native Scotland and moved to Halifax when he was 22), and the name Keith Hall suggests a venerable county house. Seems like the brewer is trying to conjure up a little story about himself. 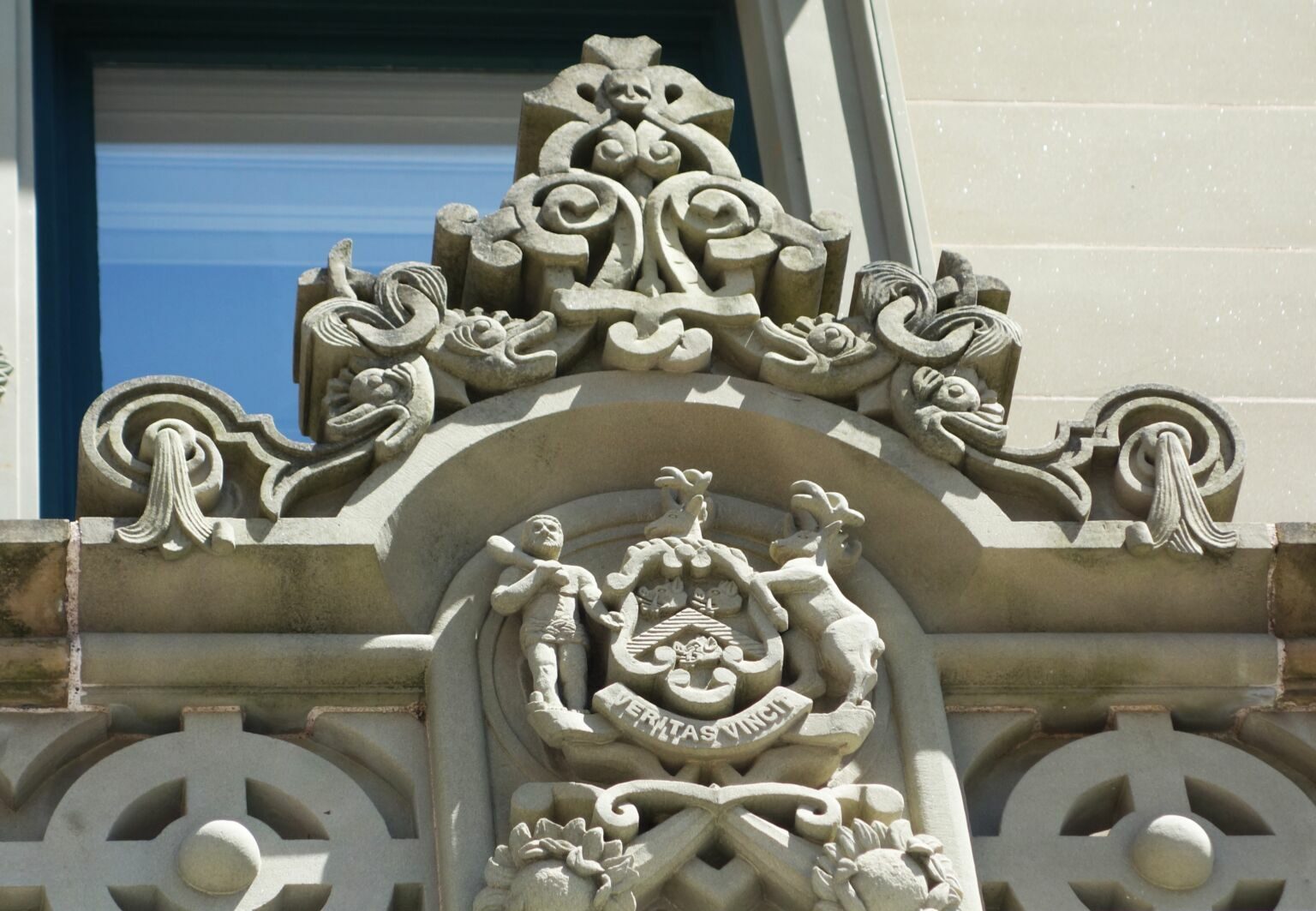 Alexander Keith’s biography describes him as a good citizen who was very invested in the Masonic Lodge. Here he is in his old white man Masonic regalia. 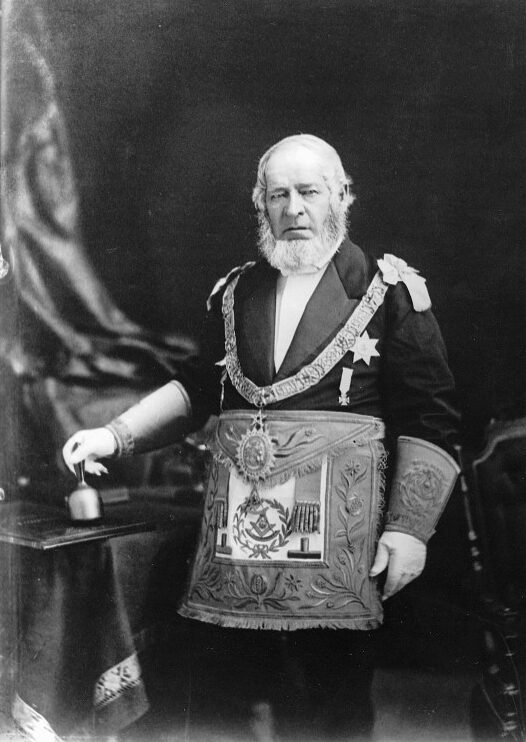 During Doors Open a few years ago the entrance to Keith Hall was open and I got a taste of the elaborate decorating of the interior. Here is a detail on some painted glass. Italian enough for you? 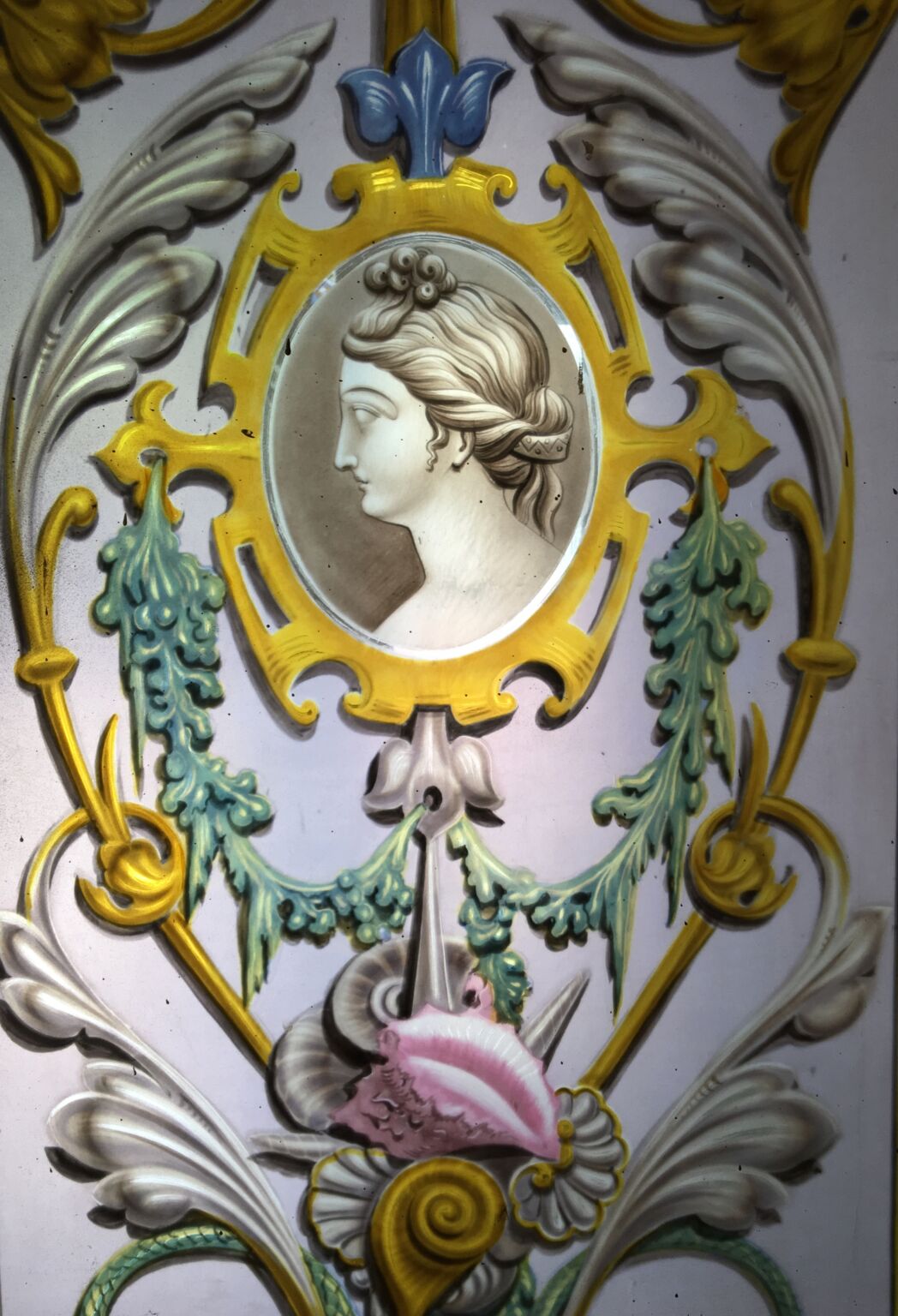 The lively façade of the 1864  Benjamin Weir House is my favourite of the two buildings. The tall windows are framed with richly decorated sandstone surrounds. The cast iron railing on the second story balcony is a special feature as are the crisp little window openings in the tiny centre gable. 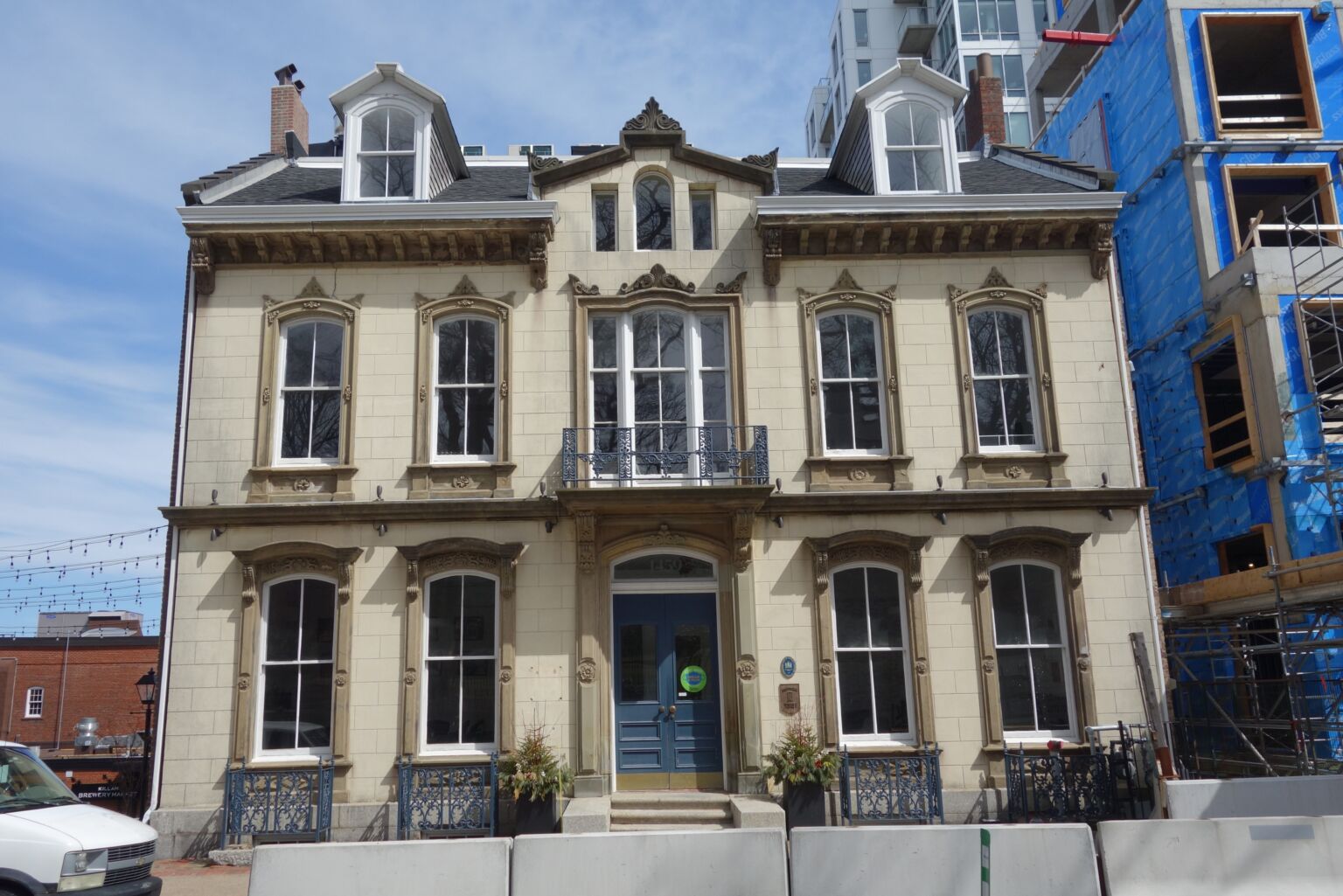 Both of these buildings have been exquisitely and expensively restored in recent years. The Wier building is particularly interesting because it is the only restoration in town I can think of that reproduces a once common stucco finish with lines scribed to suggest cut sandstone. Do stop to take a close look at a very special detail: course silica was applied to the surface of the stucco so it sparkles like real stone. 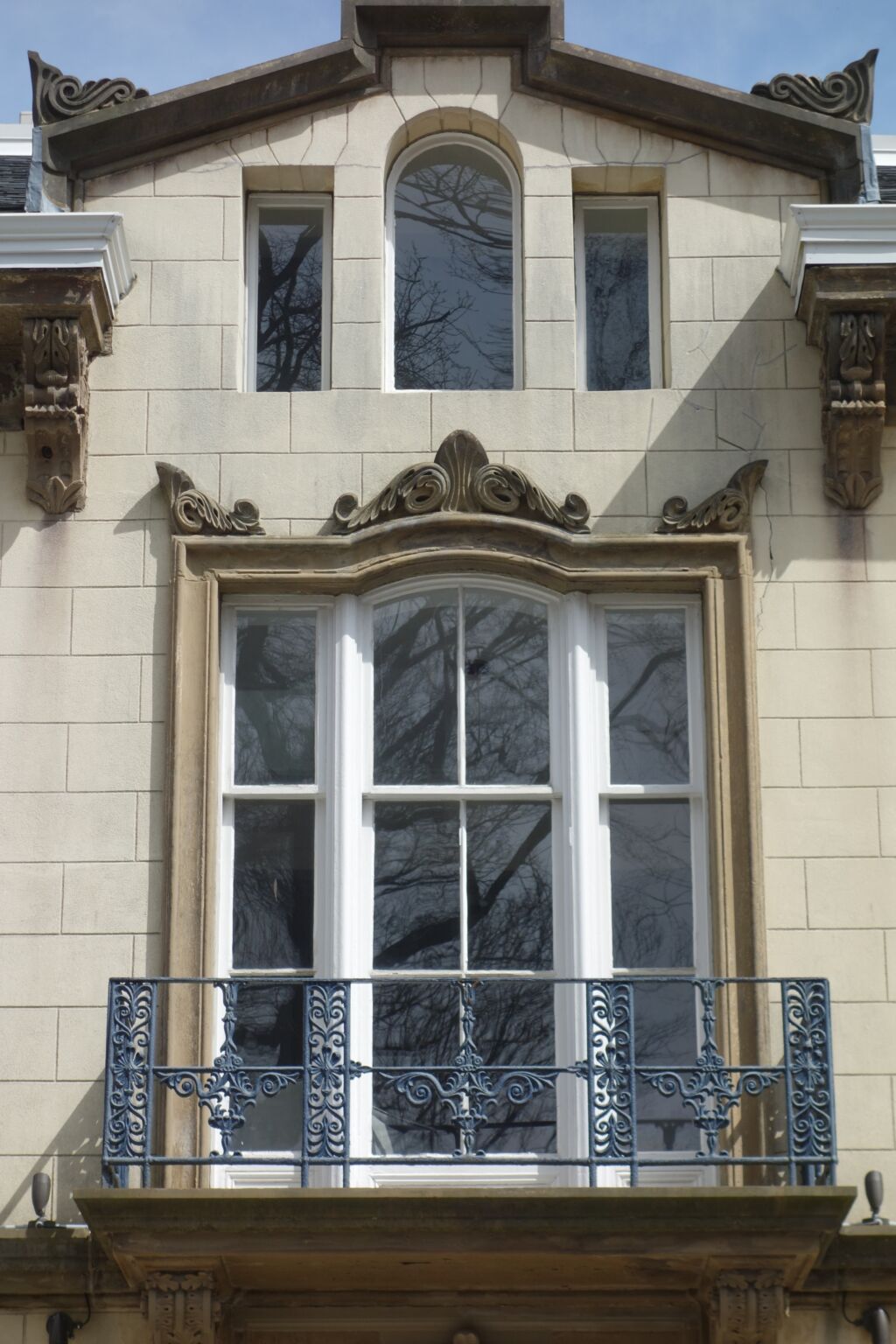 In the 1970s I took a number of photos of the cast iron railing on what was then the Elks Lodge. 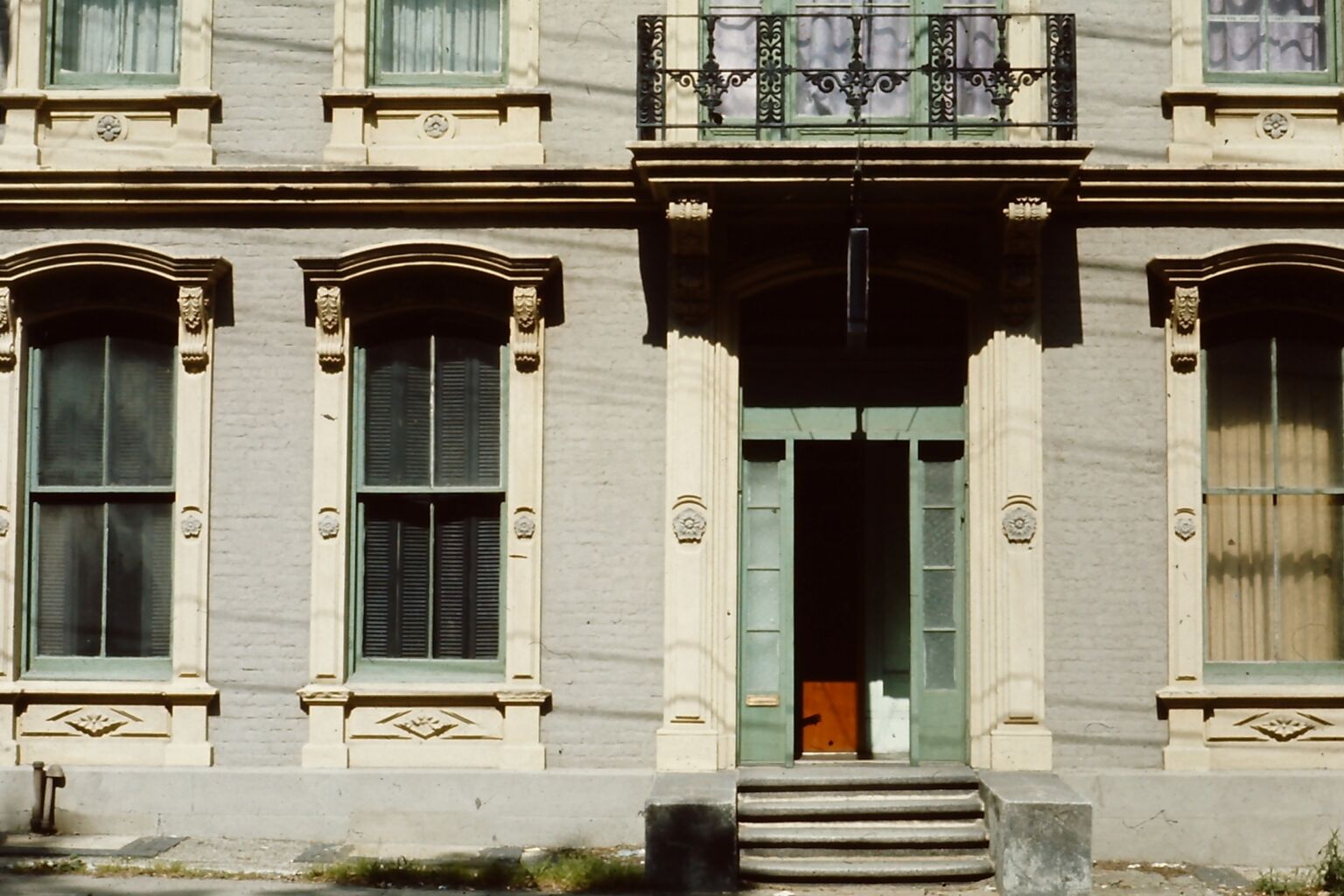 Benjamin Wier (1805-1868) is a good example of why you might not want to name houses after random people from the past. He built this beautiful house but only lived in it for a couple of years before he died in 1867. His biography describes an “unmannered malcontent” businessman and politician who I would be happy not to know. In politics his legacy was ensuring the patronage system was securely in place.

Wier was probably able to build his lavish house with profits from trading goods with the southern slave-owning states during the American Civil War. Today Wier is best known as the agent who helped reprovision the Confederate gun ship Tallahassee when it took refuge in Halifax Harbour. 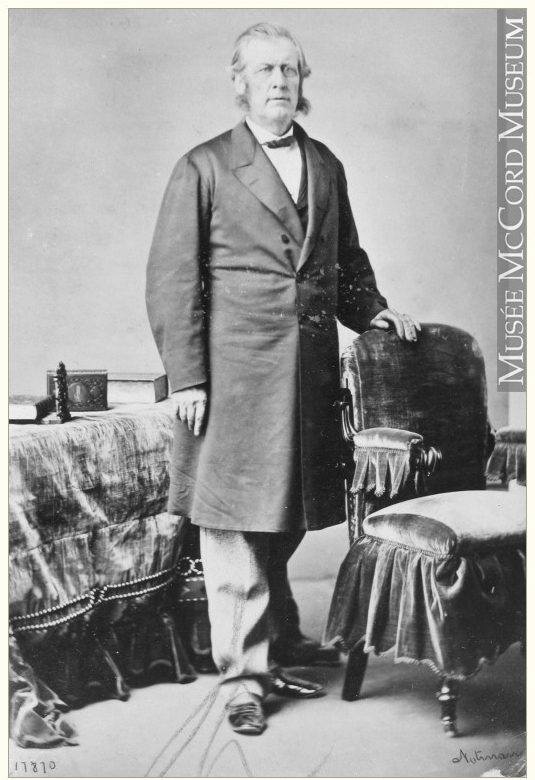 There was originally another building between the two residences so no need to decorate their side walls. 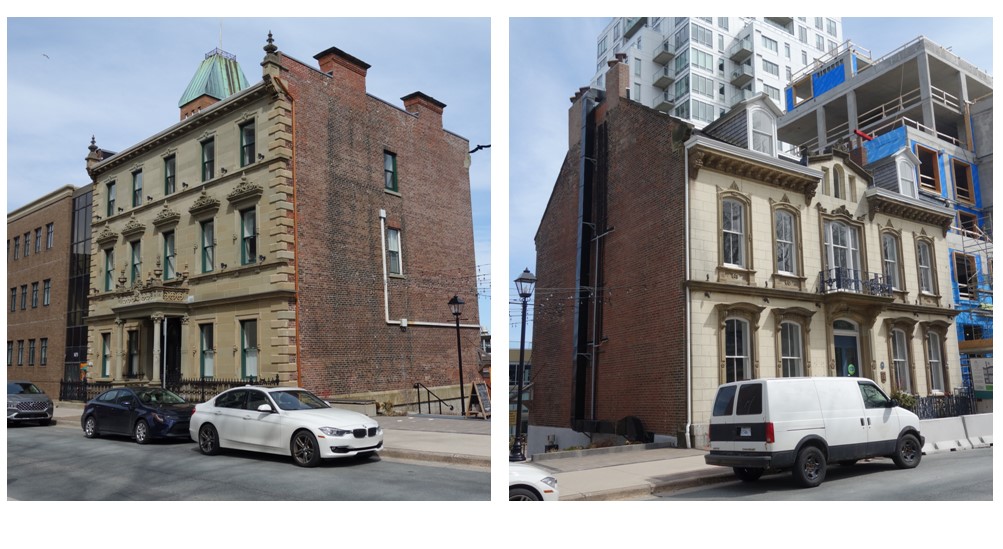 Across the street from the palatial homes of the new money businessmen were the homes of traditional power in Halifax: the residence of the Anglican bishop and next door Government House, the home of the Lieutenant Governor. Built at the beginning of the 19th century, these residences would have looked very conservative compared to their flashy new neighbours across the street. 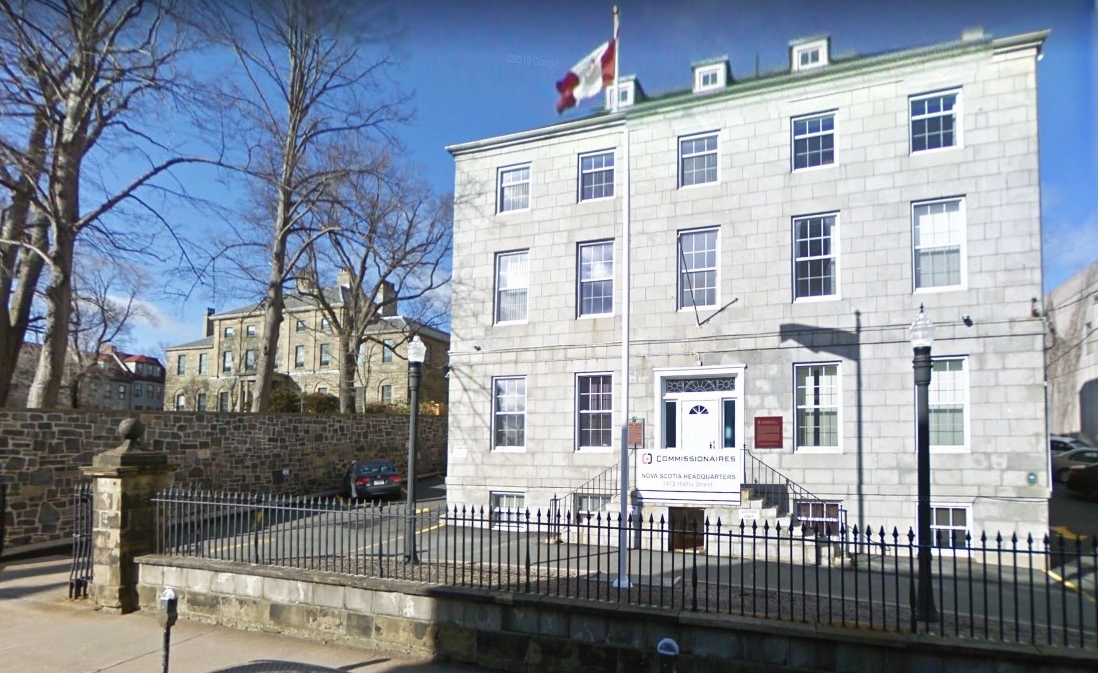 You can find more Italianate-style houses around town. Consider the Waverly Inn just up on Barrington Street. Compare its wooden centre gable  with the masonry version on the Wier House. 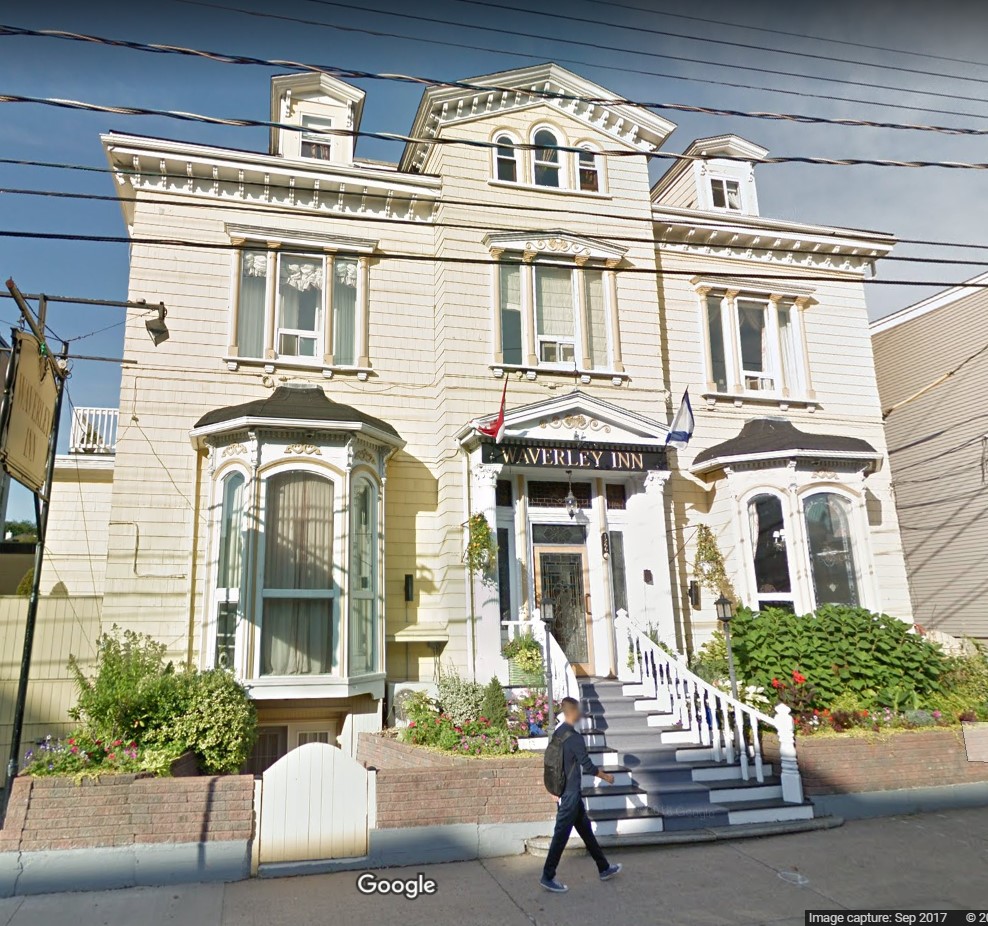 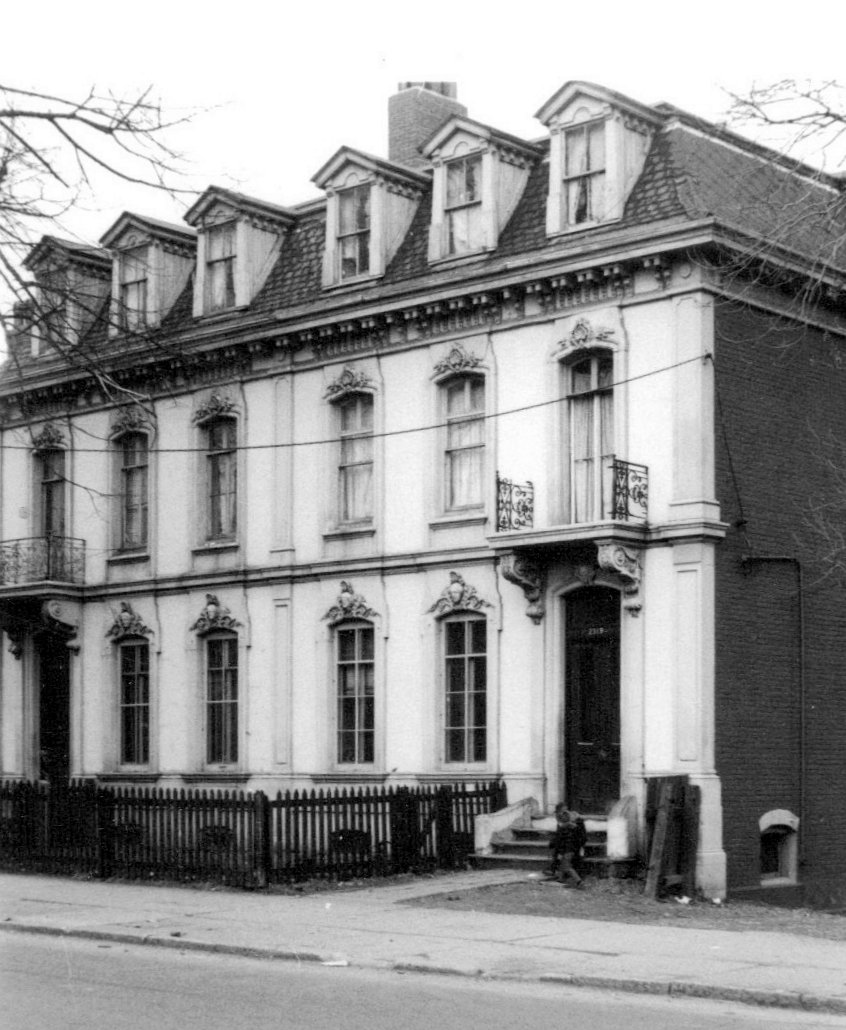 Up on Brunswick Street are more mansions of the commercial gentry from this period. Do the little balconies on the West House remind you of the Wier House?

When I grew up in Halifax in the 1950s and 60s I was led to believe (by my prohibition-era mother) that the beer business was not quite proper. However there was respect and admiration for the grand “castle” on Young Avenue, the residence of the Oland beer family. The Olands purchased Keith Hall (that was then owned by the Knights of Columbus) and associated it again with the Keith Brewery they then operated. Very fine houses send powerful messages. 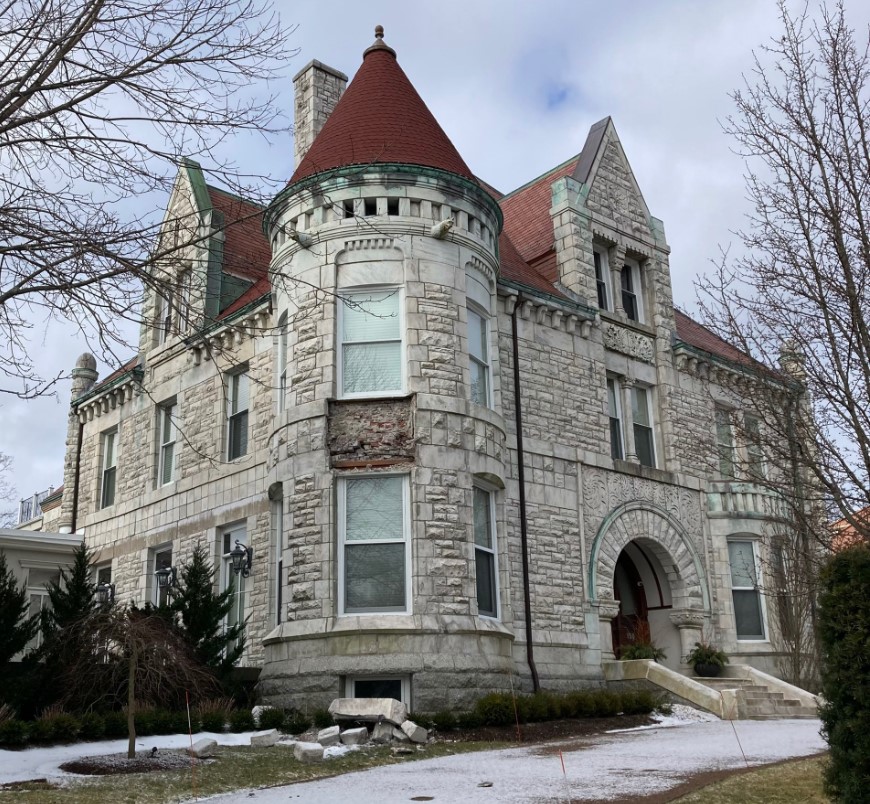