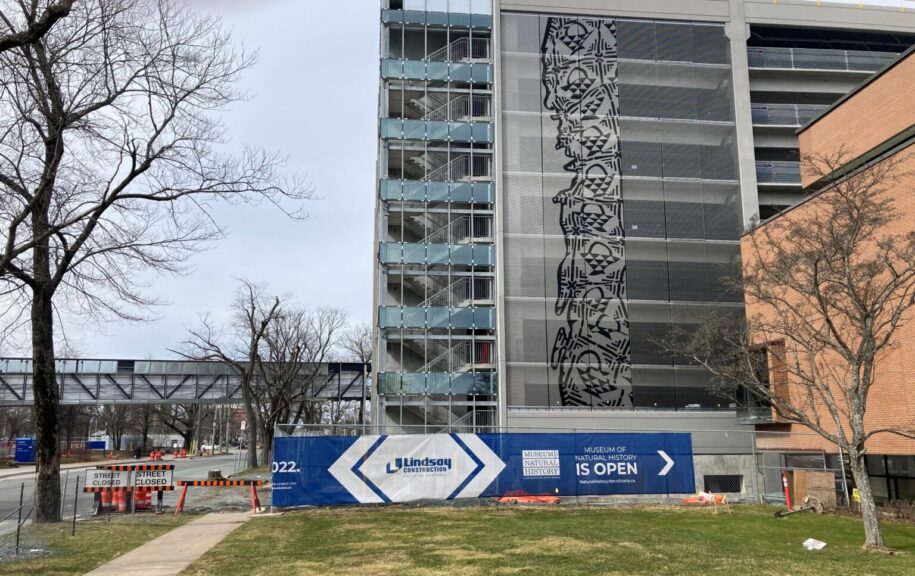 On Sunday I wandered downtown for the first time in a while. The city was surprisingly busy and everything felt somehow bigger. Can’t explain that. Here’s some other things noticed.

The Granville Street side of the Dennis Building is trussed with a giant steel structure that reminds us of a time when engineering could be beautiful, and a bit frightening. Wonderful and surprising to see a landmark building being “saved.” This didn’t just happen, stars are deserved. 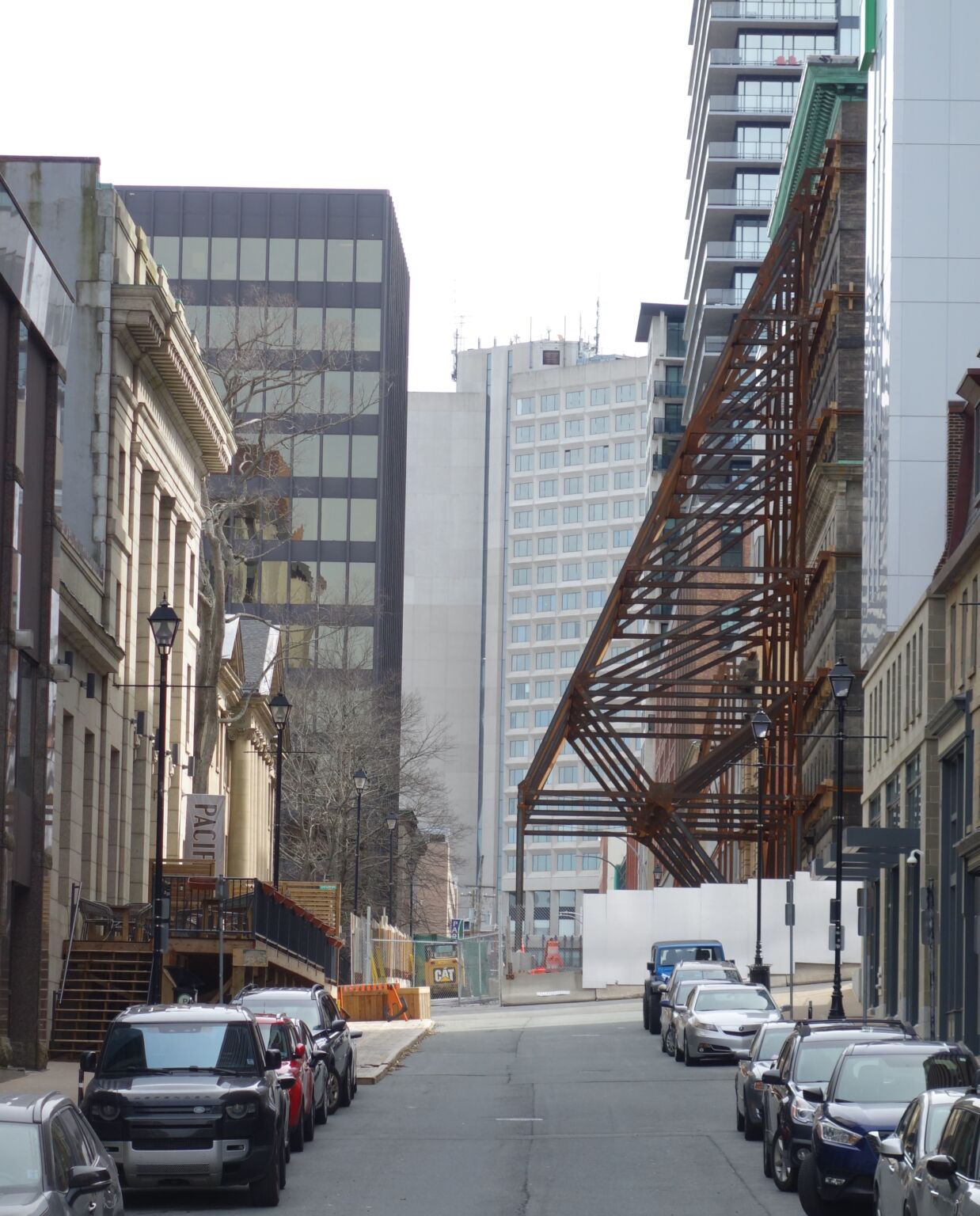 It was my first time walking past Zellers, at the corner of Barrington and Sackville, since the sandstone façade had been reinstalled. Lovely to see the art deco-style panels again. Does it remind you that fiddlehead season is soon? 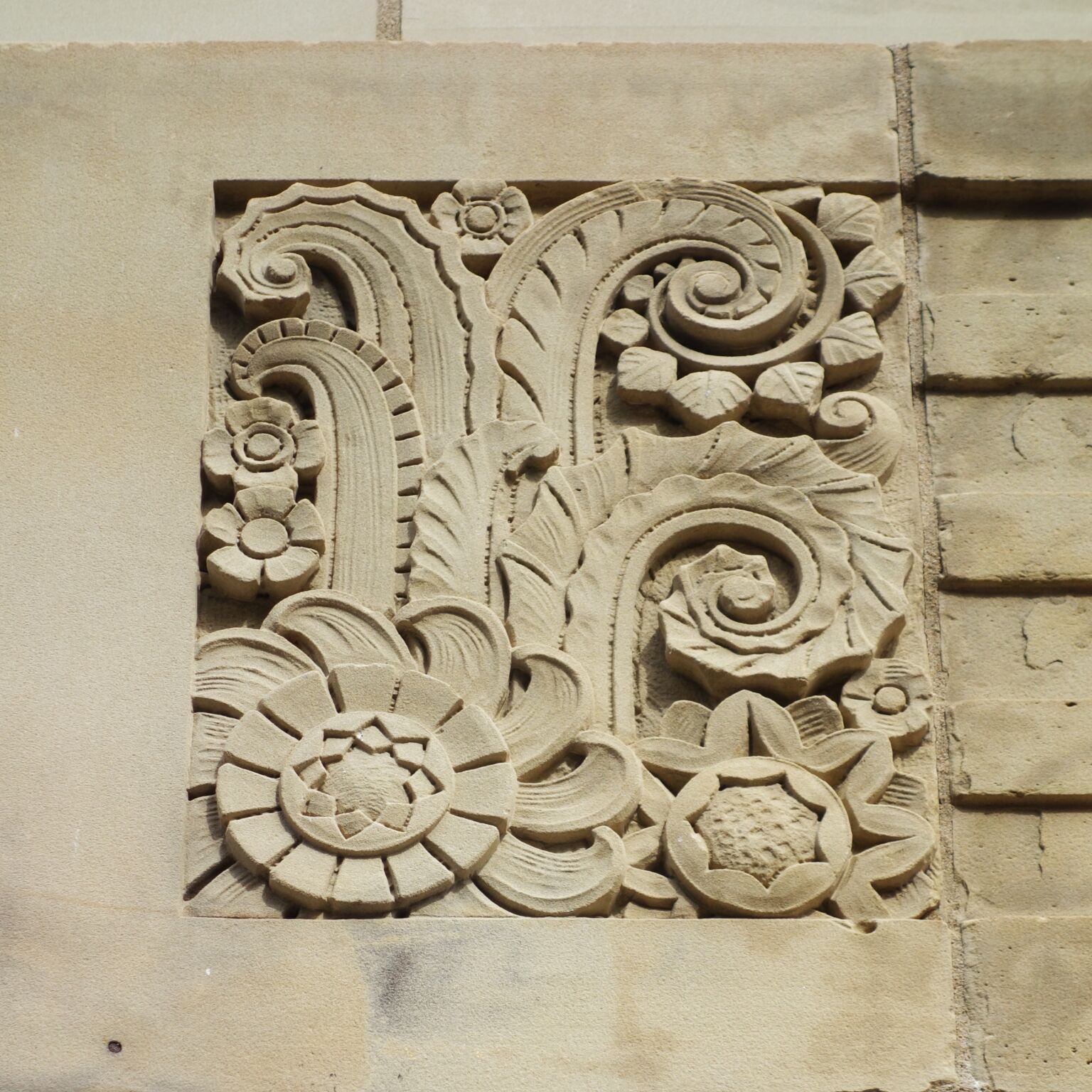 A couple of blocks down on Hollis Street there is a more stylized version of this concept. In Miami Beach, famous for its art deco buildings, we saw similar motifs described as “frozen waterfalls.” 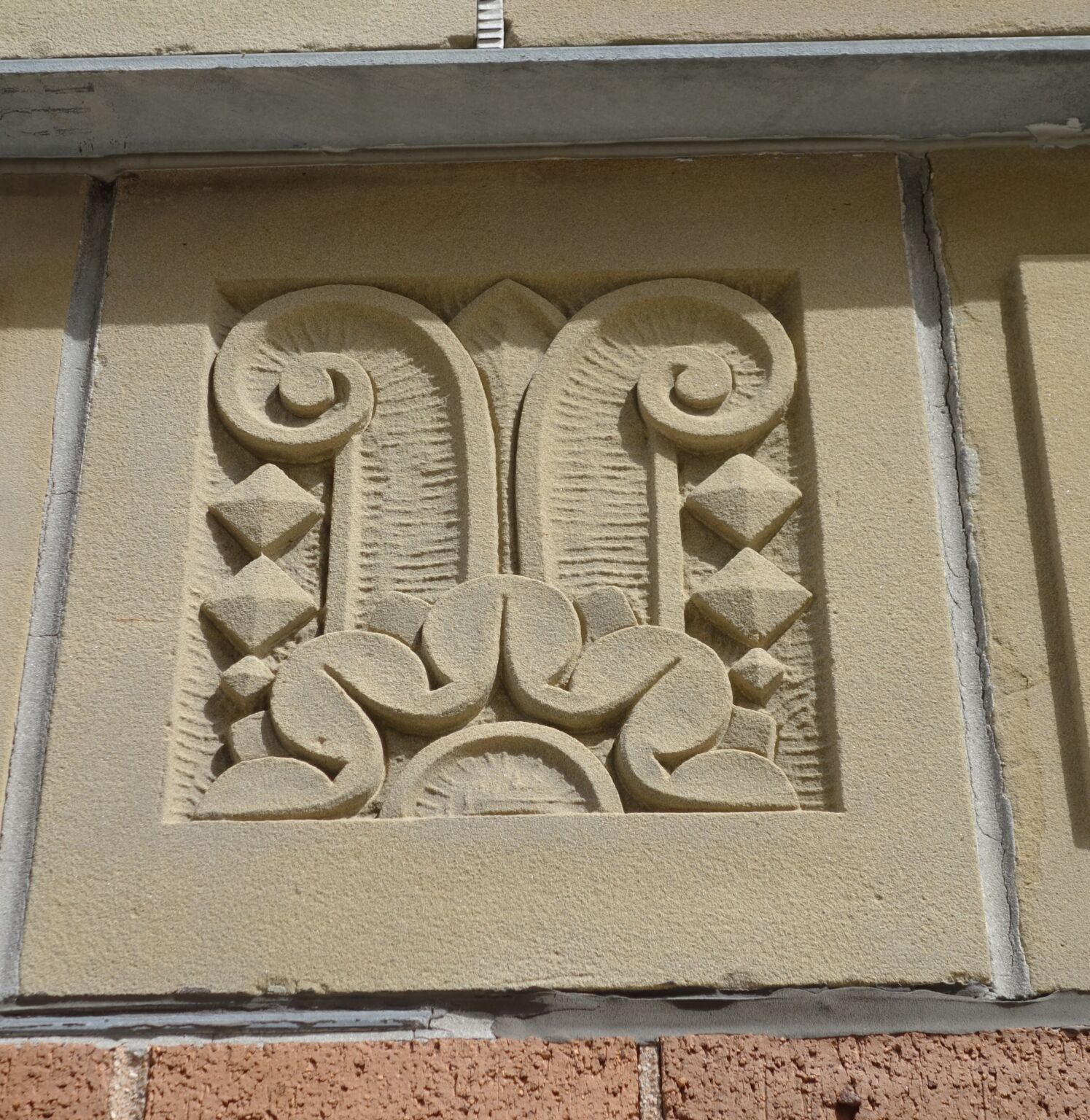 There was a purpose for my visit to town; I was planning the route for a Jane’s Walk that is happening in early May. Then we will be looking at Italianate style architecture of the 1860s, but on Sunday I got distracted by the passages at the corner of Hollis and Salter. Since listening to a CBC Ideas program I now understand these as liminal spaces but don’t take my word on that. 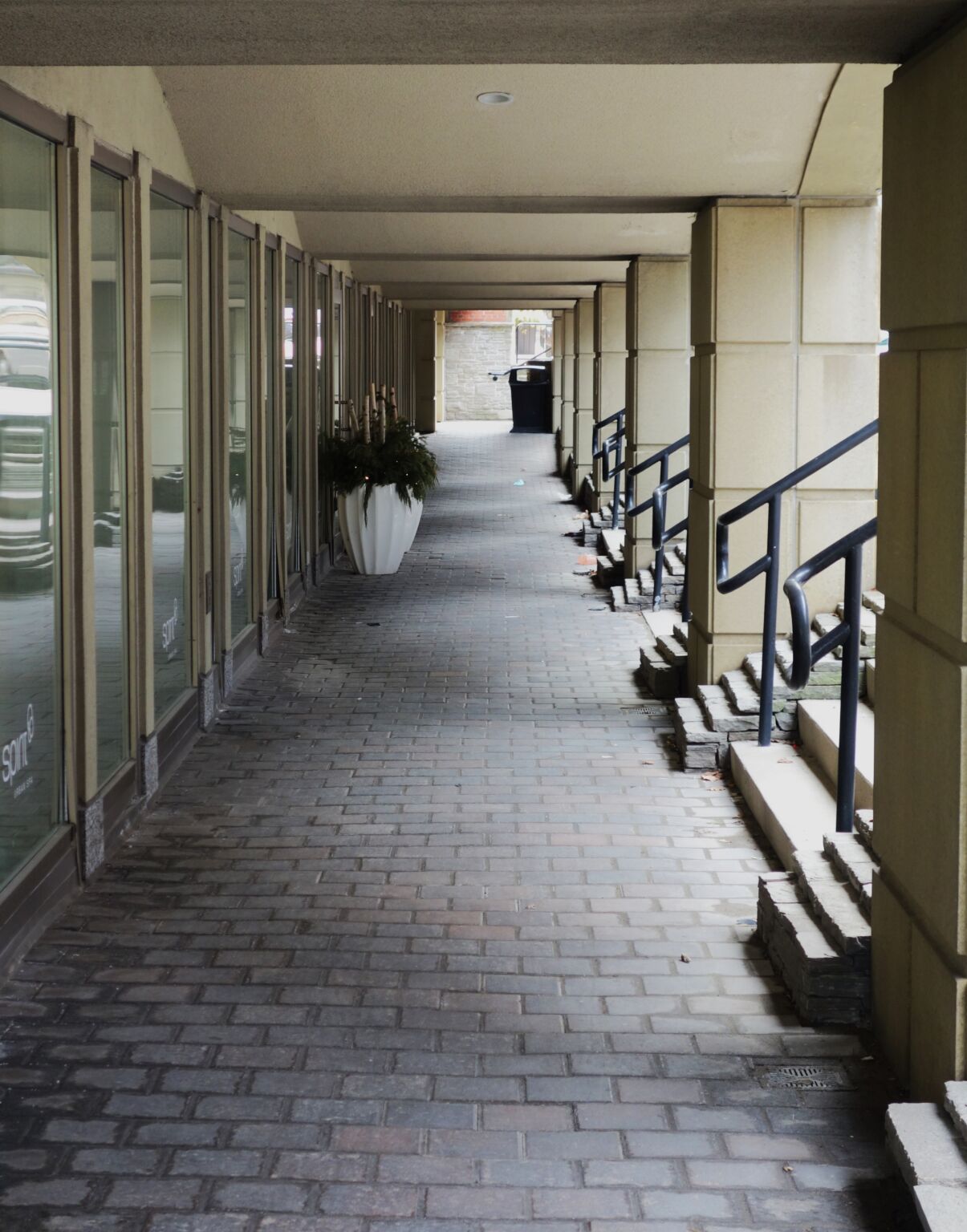 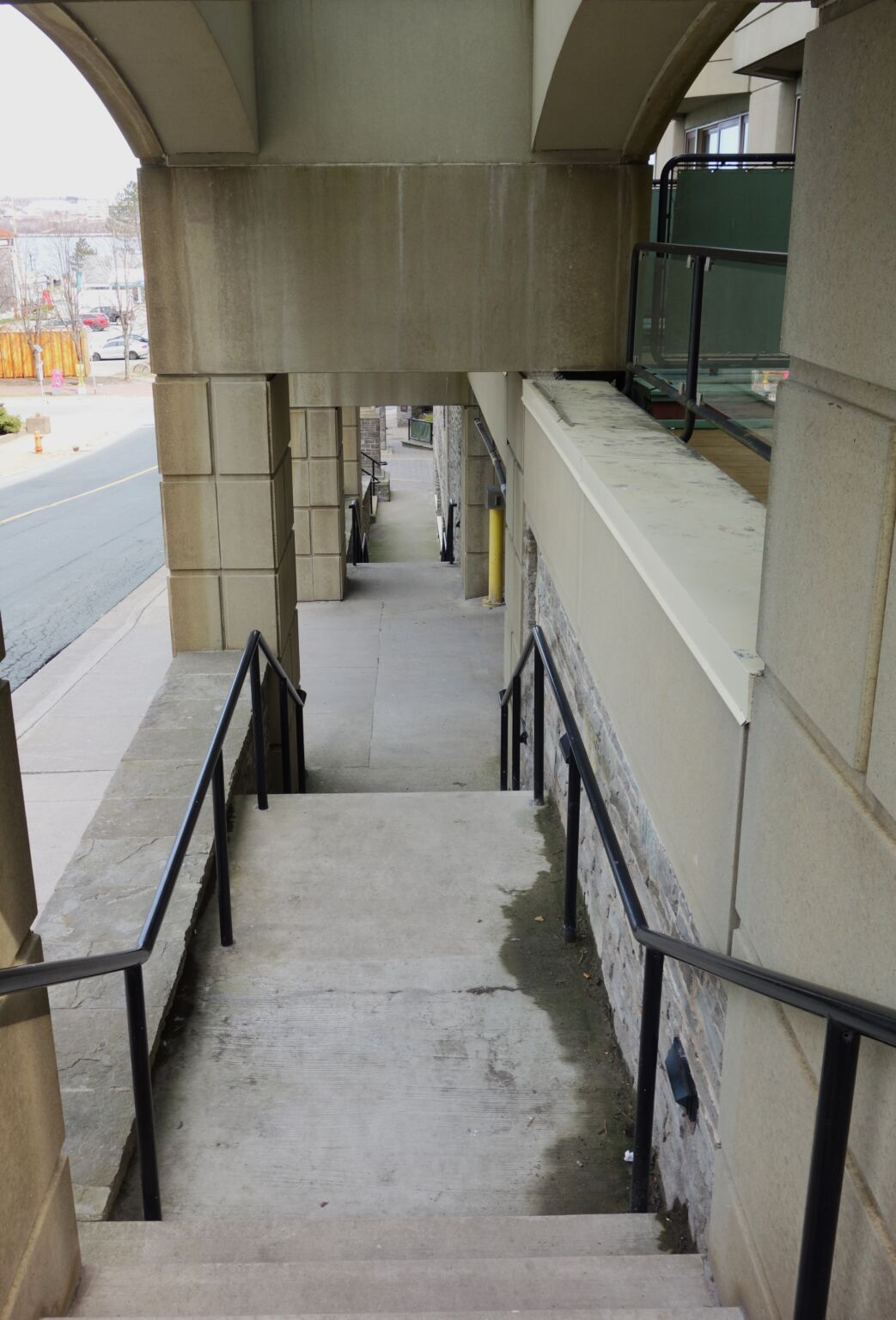 The nineteenth century facades sometimes attached to big developments of the 1970s and 80s now feel quaint. Sadly they are often soulless at the pedestrian level, like those skirting Founders Square on Hollis Street. It is as if the developer spites us by ensuring the old shopfronts will never be used to give life and energy back to the street.

So I was heartened to rediscover a tiny visual delight. The Lenoir Building, built in 1816, was once one of the oldest commercial structures in Halifax. The architect for the Founders Square project (the talented Roy Willwerth?) designed a glass chimney gesture in the roof. And that mini roof is covered in real slate shingles, another classy touch. The original chimneys were at the ends of the building, not in the centre, but you know, with façadism you take what you can get. 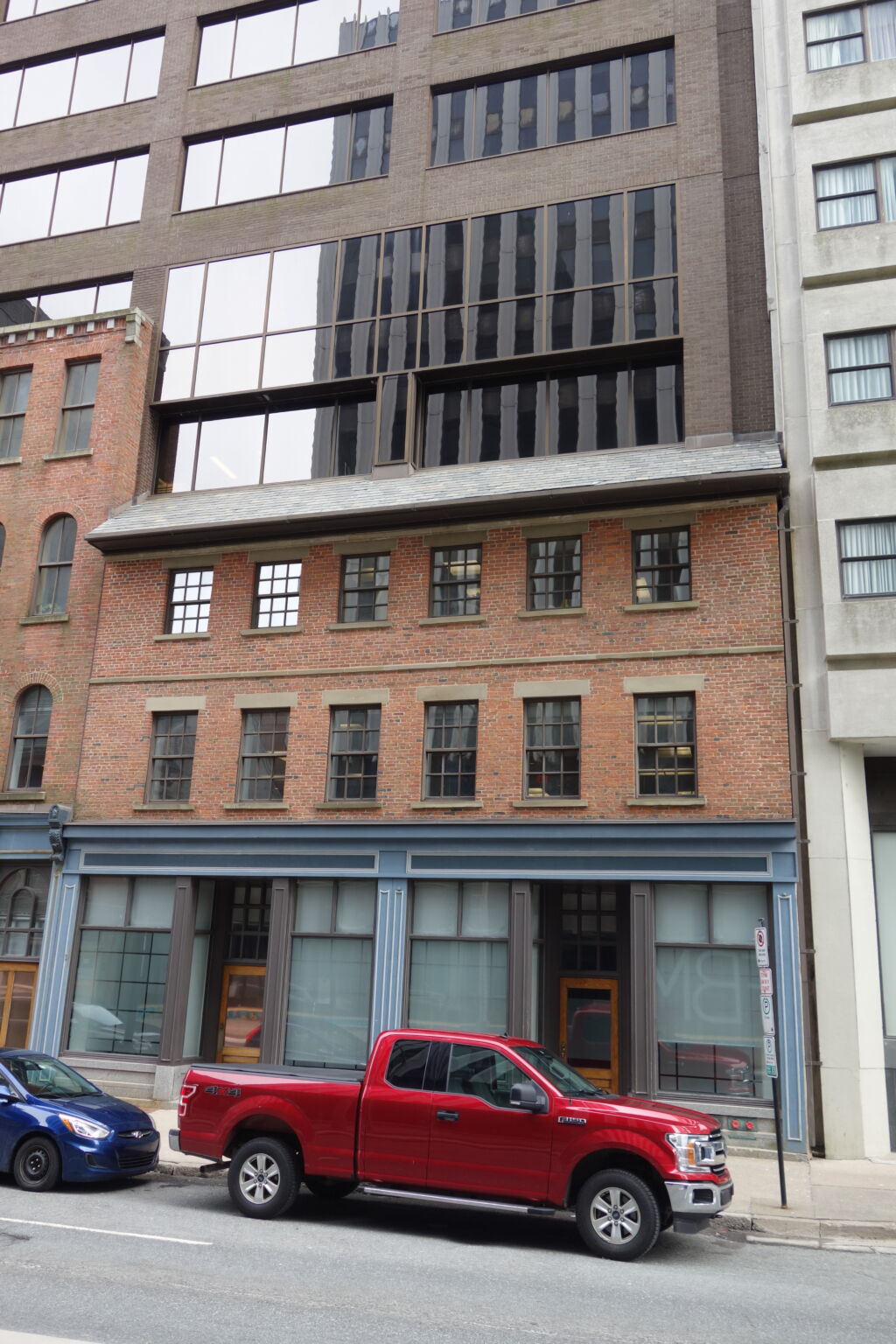 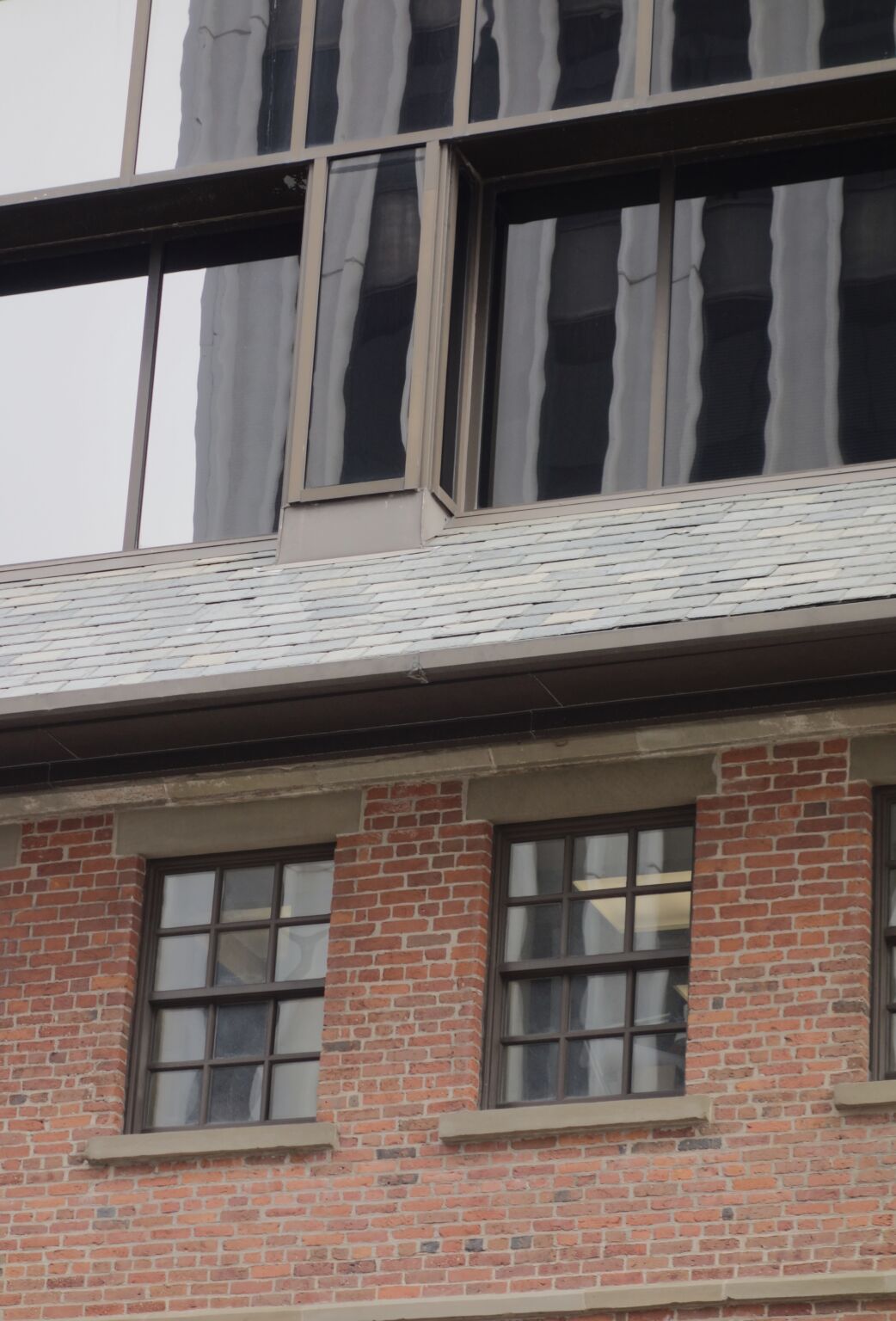 For several minutes I stood at the foot of Maritime Centre to feel if their new podium was breaking wind. Still hard to tell if there is respite from the bitter winds that have cascaded down the tower for the last forty years. It is reassuring to know that if this problem is not cured that the owners will remove the new construction and start over again until they make it right. 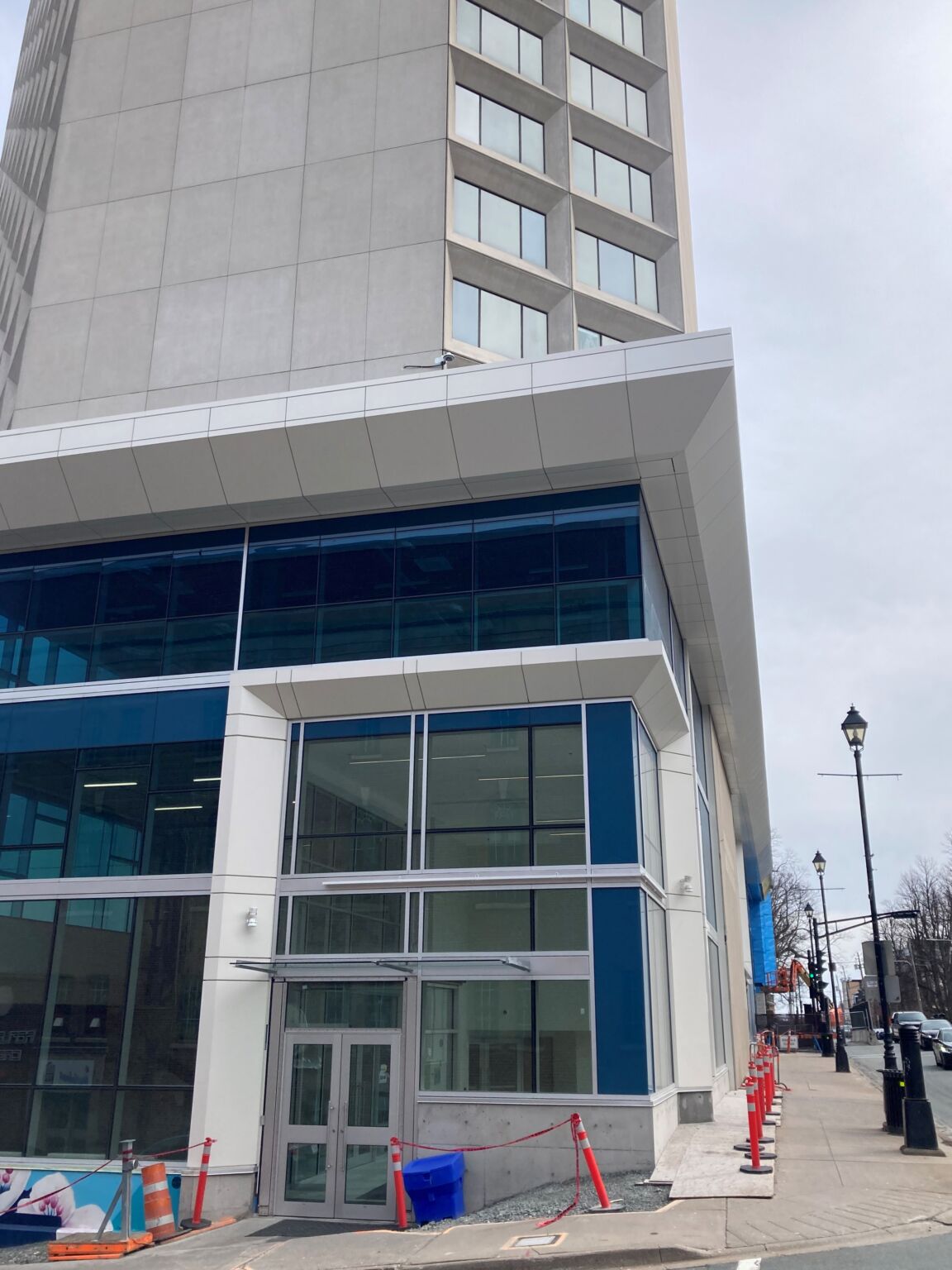 Return to the House of Cars

Speaking of my hope for things to be made right, on my way out of town I stopped by the parking structure under construction on the Common to see the new metal scrim I’d heard about. I guess this design results from a Request for Proposals that the province issued in December, asking creatives for design proposals for a metal mesh that was going to wrap the parkade. This could be the first good news coming from a fraught project.

The “sample” that has been installed shows a popular quilt design of a stylized basket cascading down the eight stories of the parkade. Will it represent grandma’s comforting quilt shrouding the structure? We’ll have to wait and see. 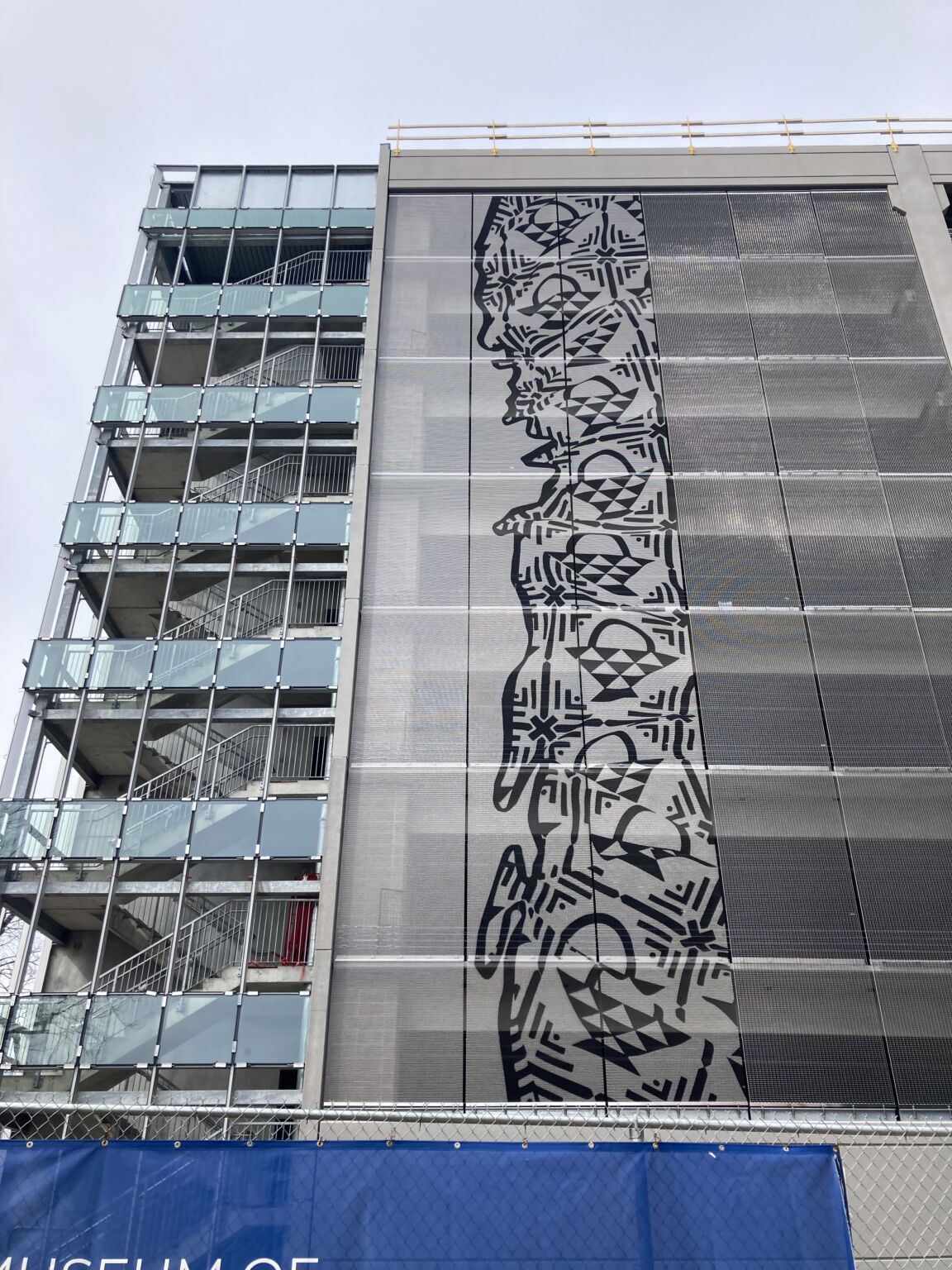 Here are my thoughts

Folks (like me) have been complaining about the secrecy around this parkade project since news of it first leaked out. The basic plans the province provided showed a facility that was soul sucking in its cheap functionalism (but parking).

The newly discovered design competition for the building cladding is good news, and the wording in the RFP suggests the province finally recognizes the parkade site is a treasured piece of parkland that deserves respect. So why has the Health Authority not announced this good news? I only learned of the RFP today (thanks Ken), it should have been front page news months ago. Guys, the community wants to help you design a successful building that we all feel good about, AND PARKING.

The new pedway over Summer Street connects the parkade to the hospital. Another fun truss almost as delightful as the structure holding up the Dennis Building. This is not sarcasm, I really am fond of these marvels of engineering. 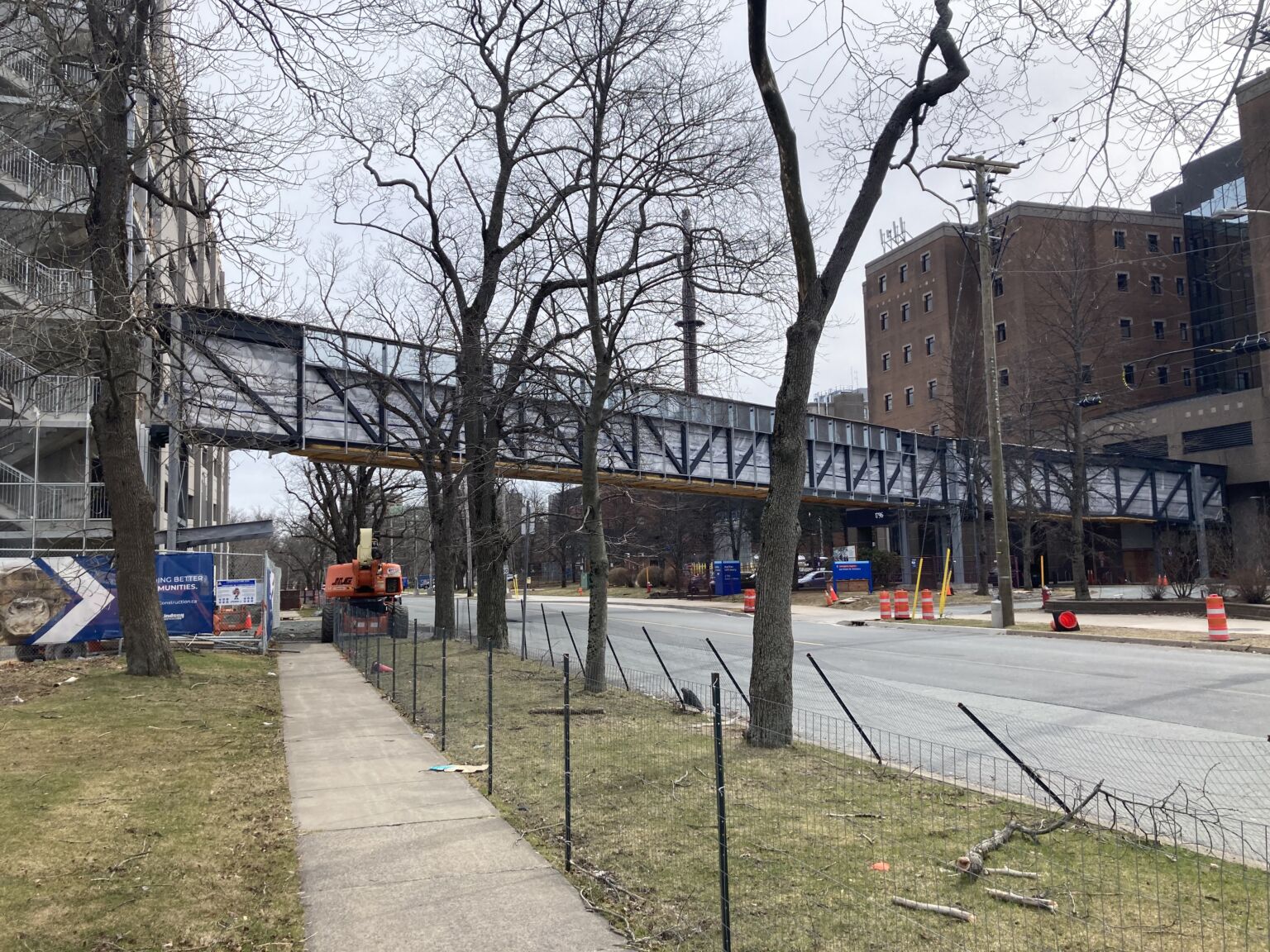 Images of the assault on Ukrainian communities have changed how I experience demolition sites in Halifax. The Dennis Building rework is good news, but it reminded me of the seeming randomness of the first attacks we saw on Kyiv. 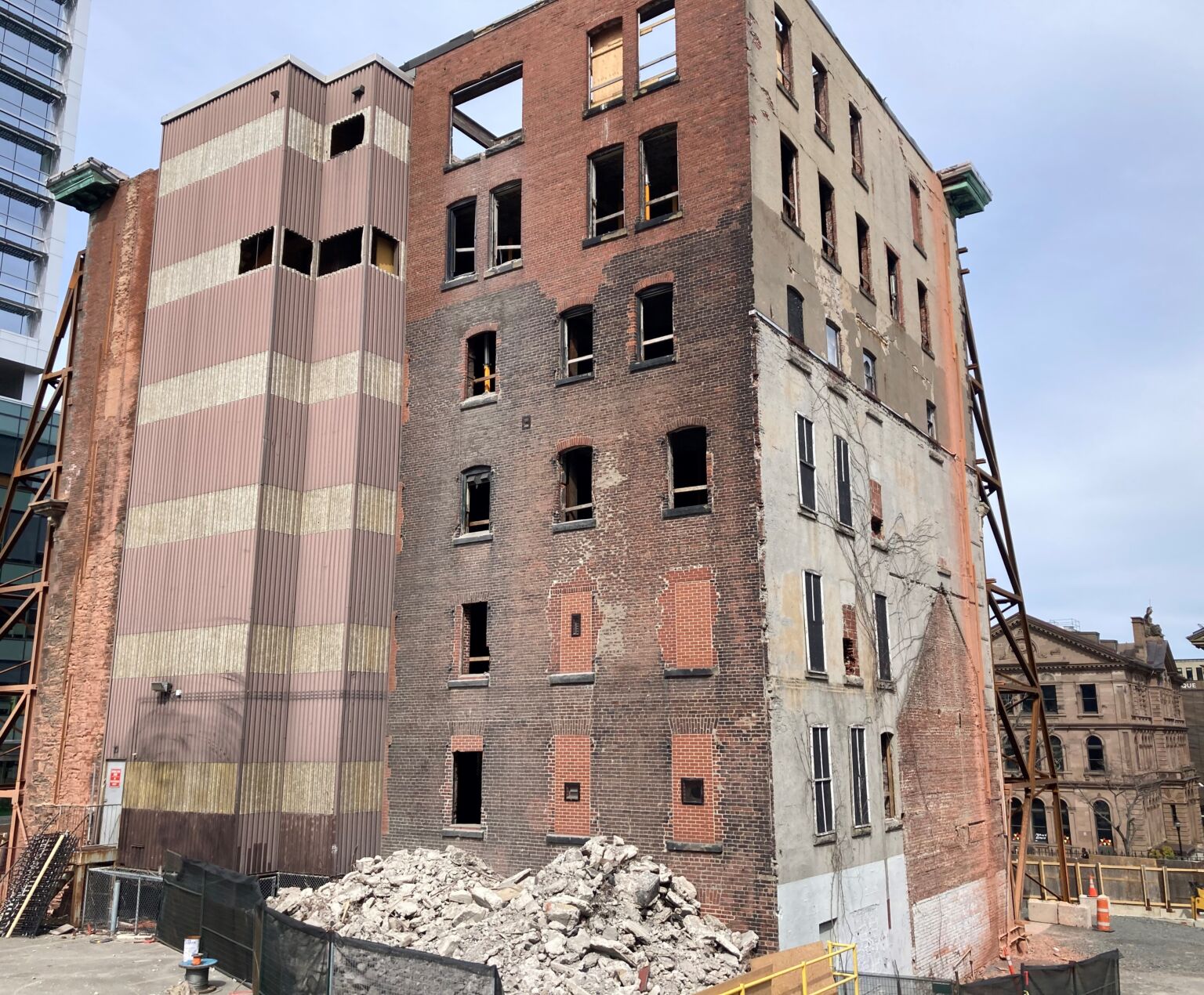 More triggering is the “missile strike” on what appears to be a perfectly good building at the corner of Dunbrack and Willett. Of course this demolition does enable lots of embedded carbon to be released. Now, that IS sarcasm. 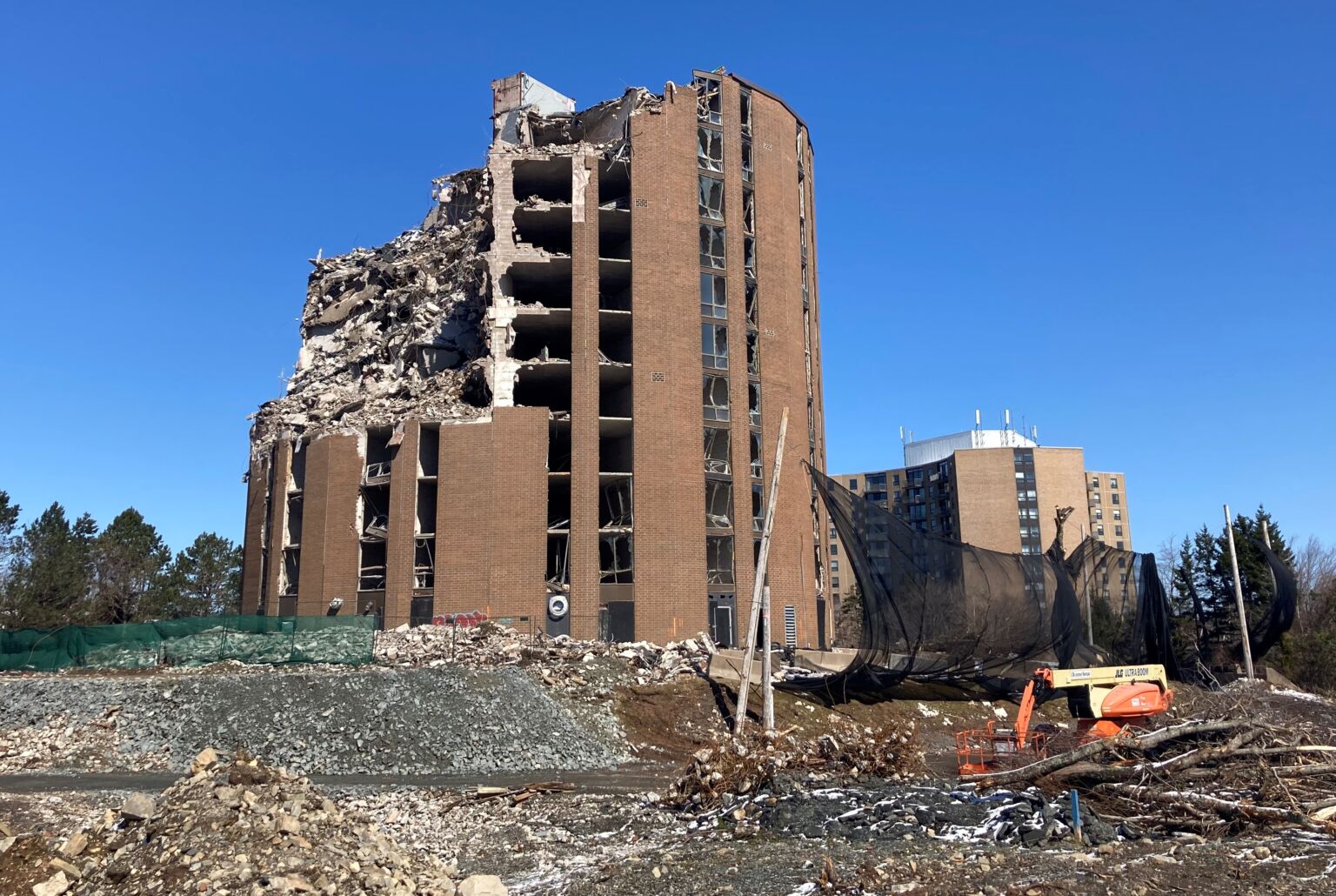 The blown out windows feel particularly authentic and violent. 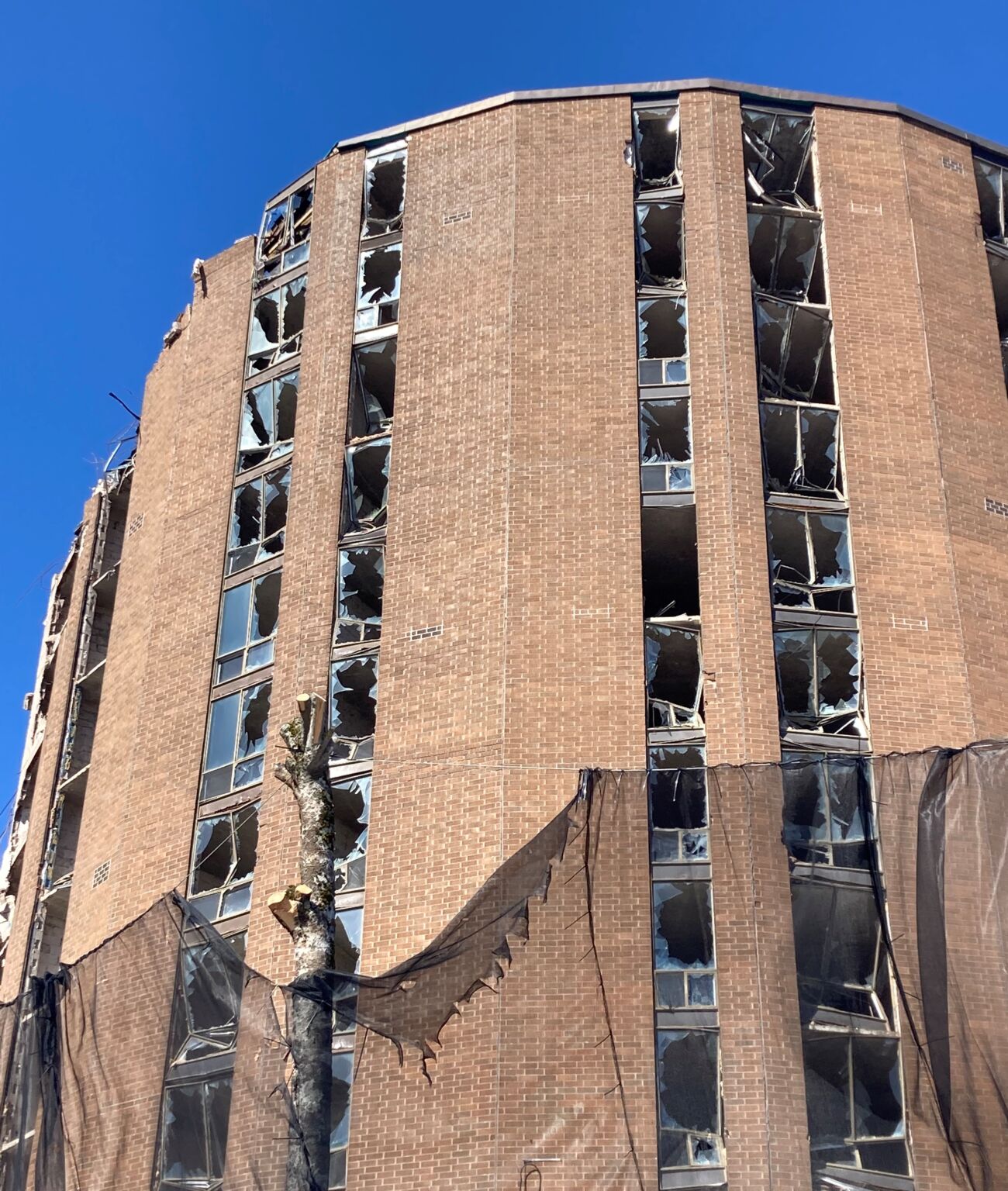 When I went searching I couldn’t find that the Health Authority had anything to say about the quilt design hung on their parkade but I did discover this swell photo on Facebook. Dr. Strang being presented with a quilt made by the Patchwork Pals of Sainte-Anne-du-Rouisseau. Totally neckties! 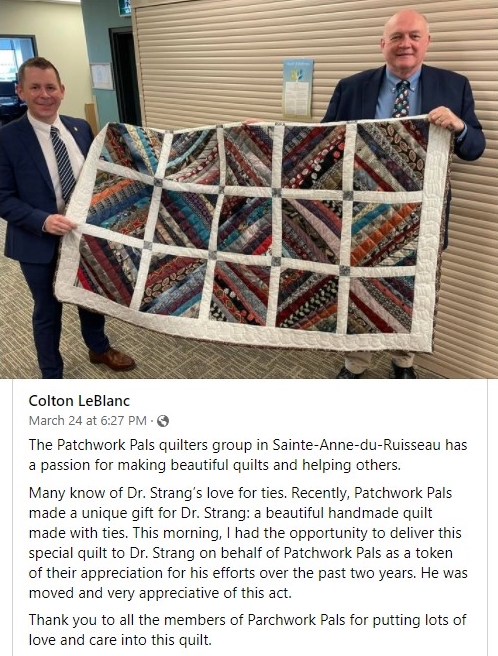