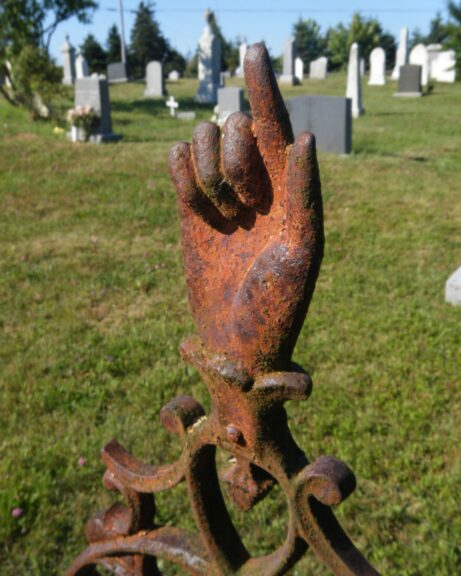 Here’s a guide to some relatively common grave markers that are so distinctive you can identify them while speeding past country cemeteries in your touring car. No need to stop, just exclaim with confidence, “did you notice that cast iron monument? Manufactured by Faulkner in the 1880s, I surmise.”

The lightness and transparency of these upright iron markers makes them stand out from their robust stone cousins. My favourite pattern is a lacy grid of cast iron, with a murmur of gothic pointed arches. This design occurs in several variations so you might want to stop to compare and admire. 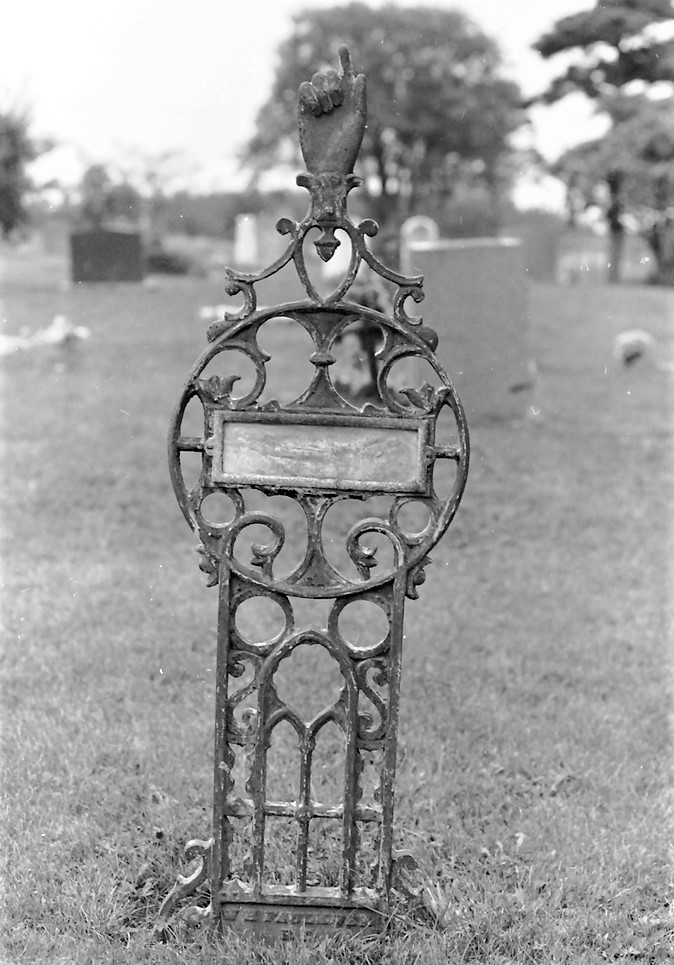 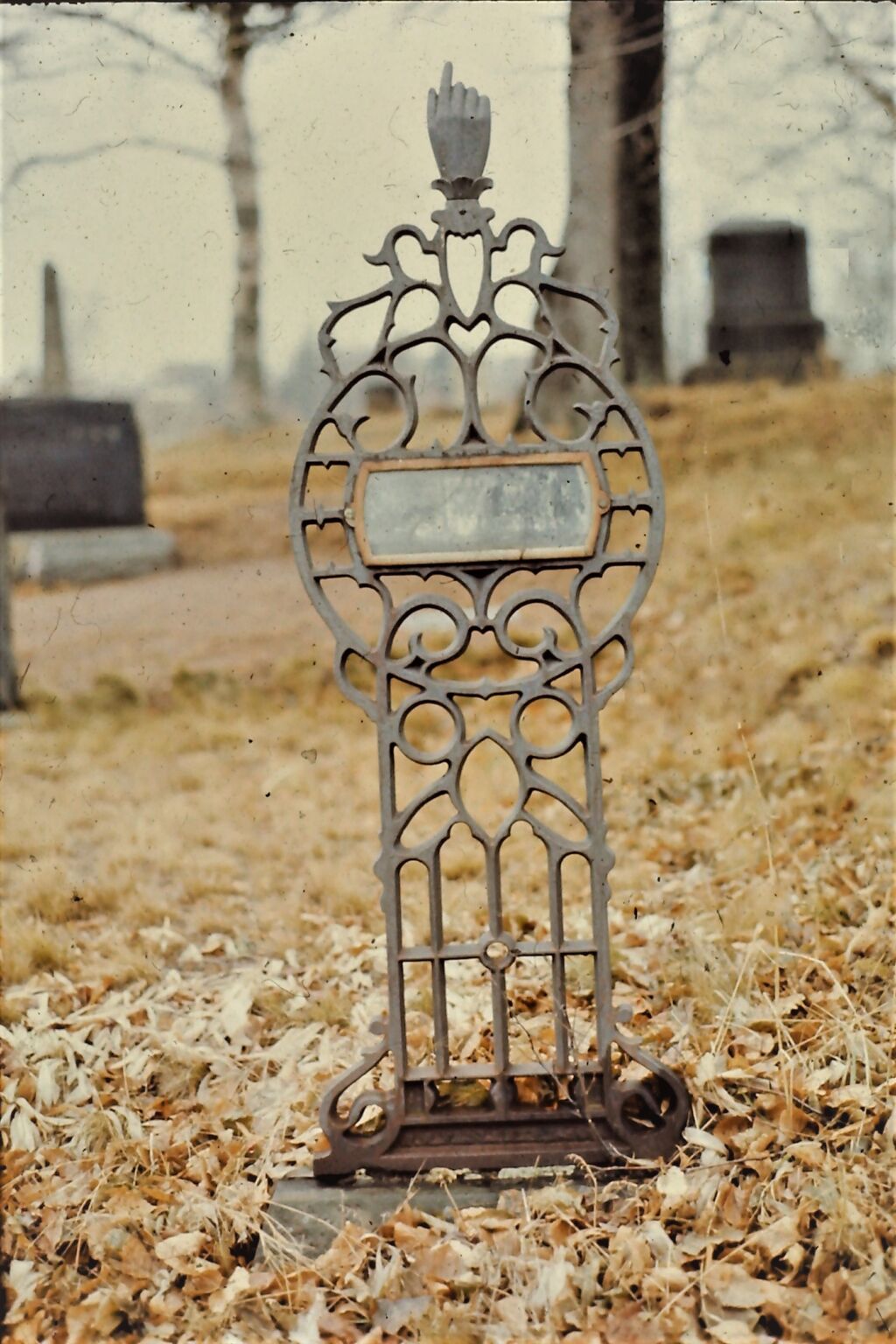 The other common design is more robust, with a floral motif that reads from a car as a maple leaf, but on closer examination it is surely not. The gothic influence here is unambiguous: pointed arches, trefoils, and a prominent quatrefoil. 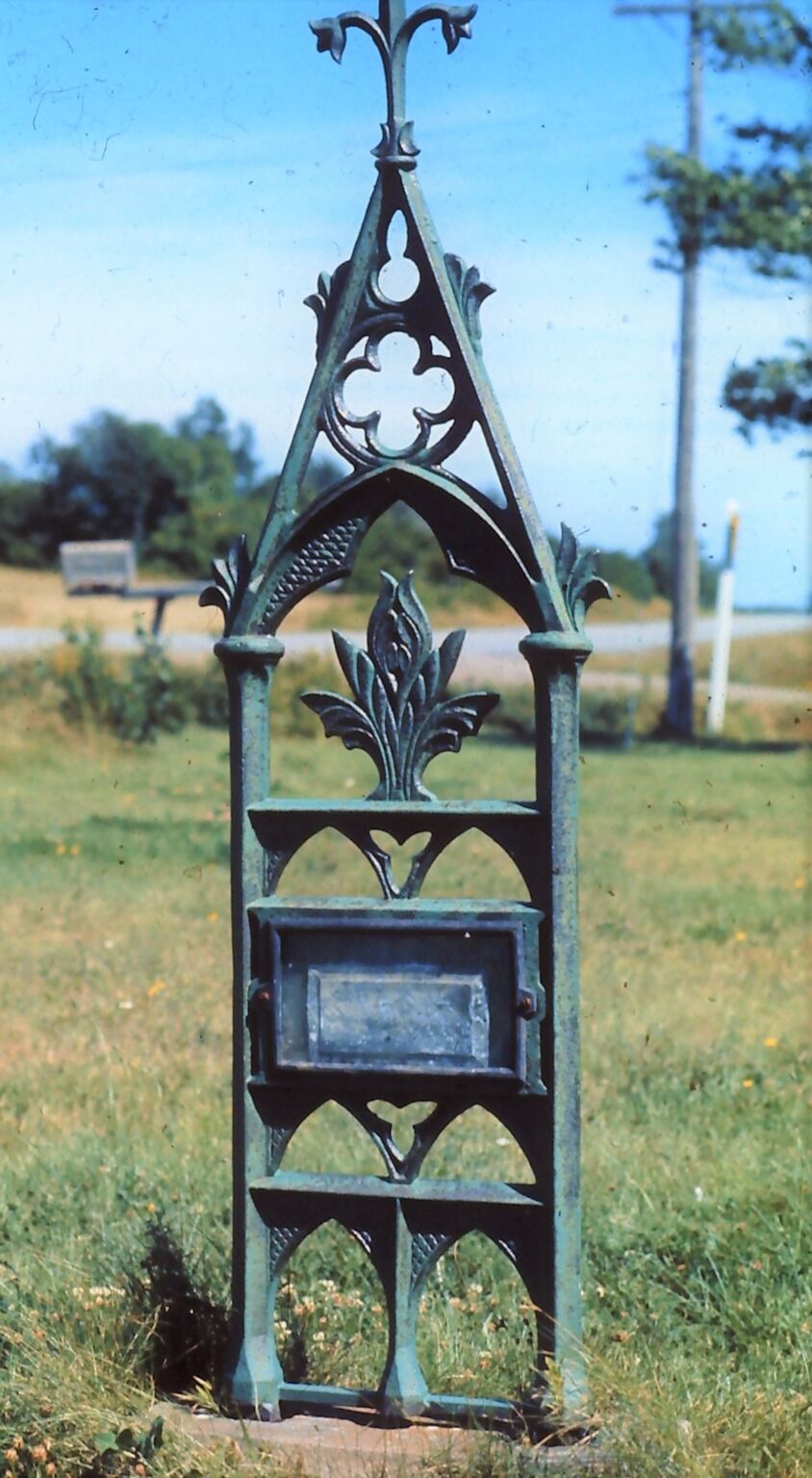 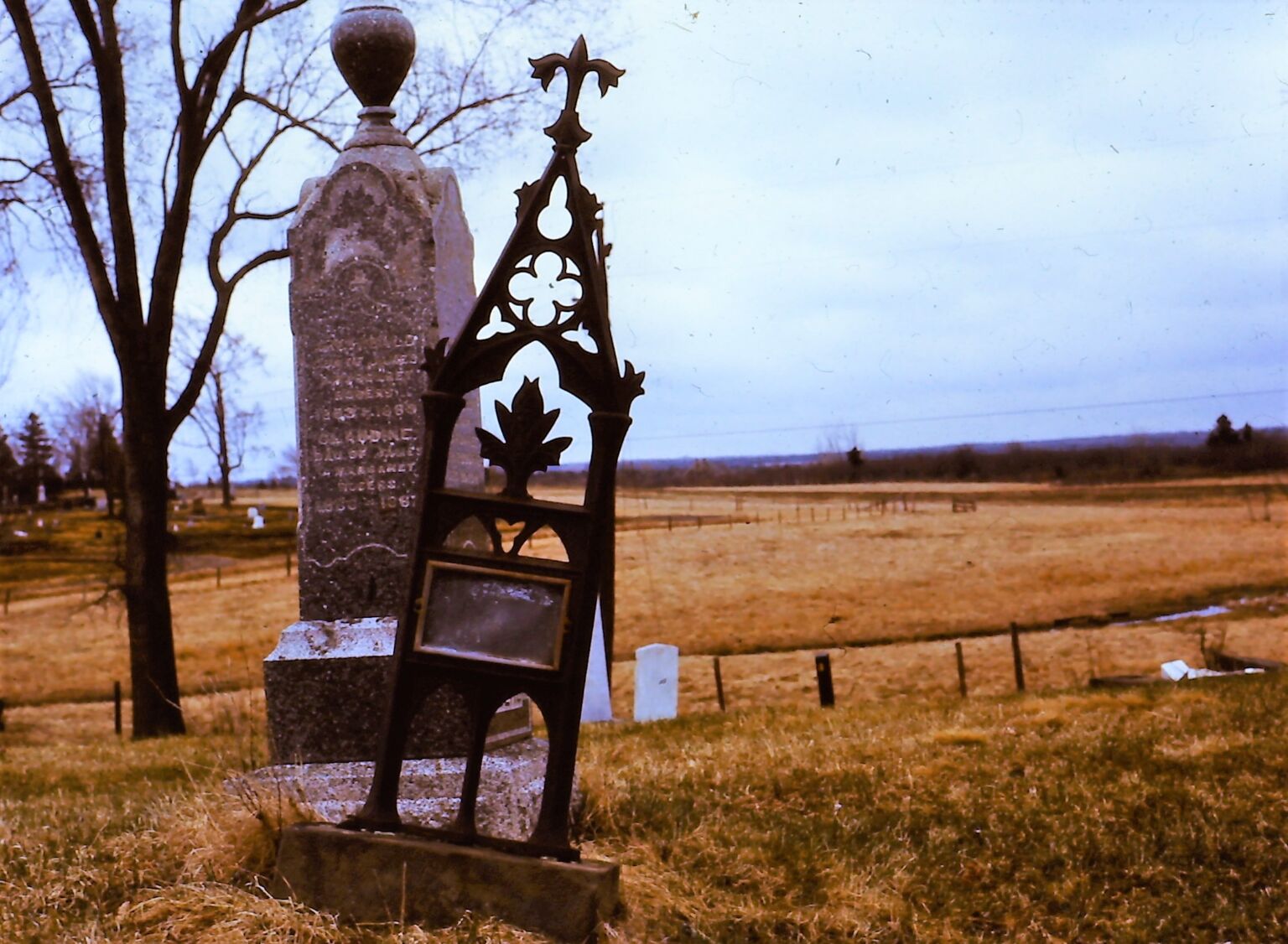 Helpfully, all these memorials have makers marks cast into the metal: W. H. Faulkner, R D 1884. Faulkner operated a company called Moncton Metallic Monument Co., and the date indicates he registered the design (I don’t know where). 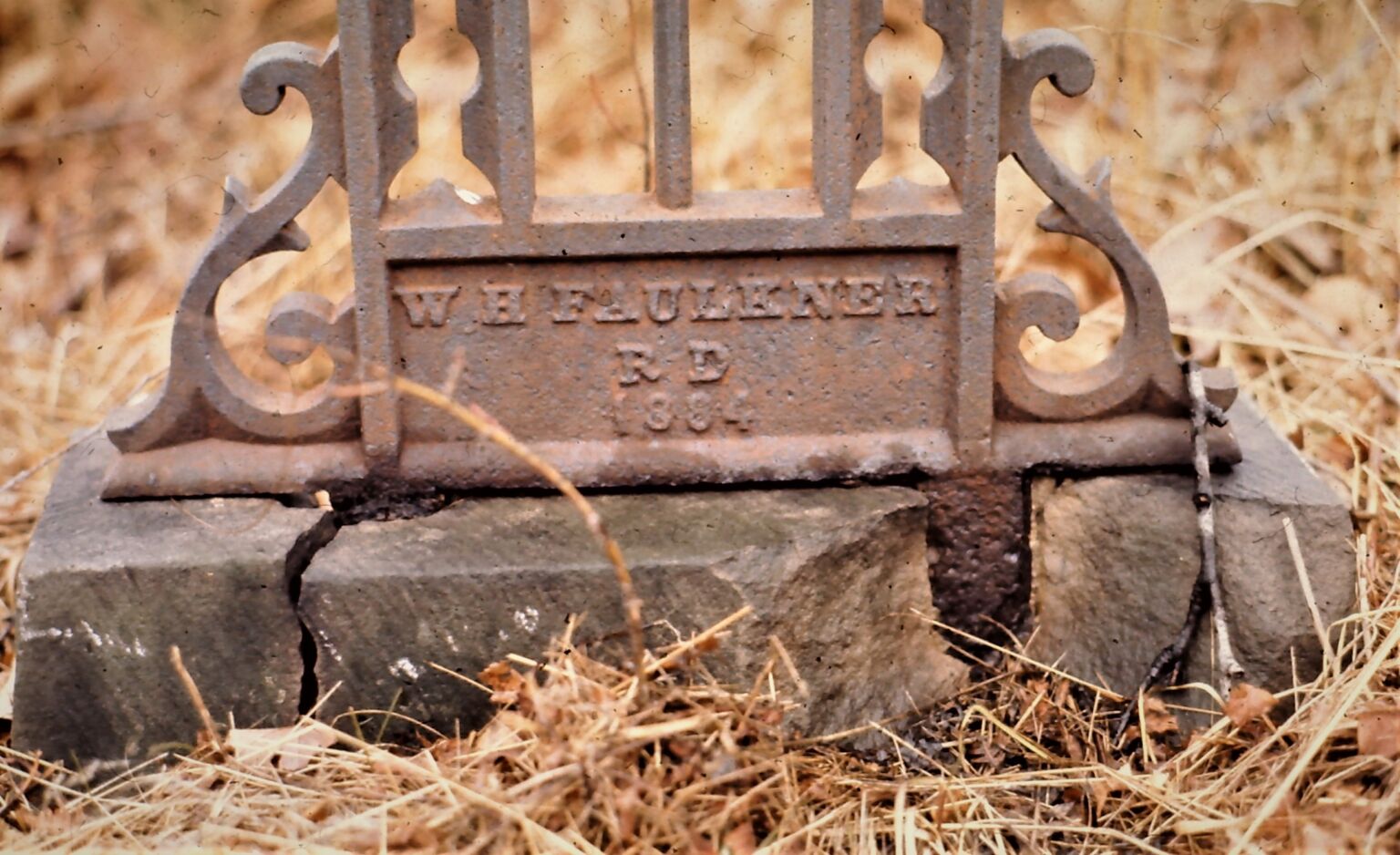 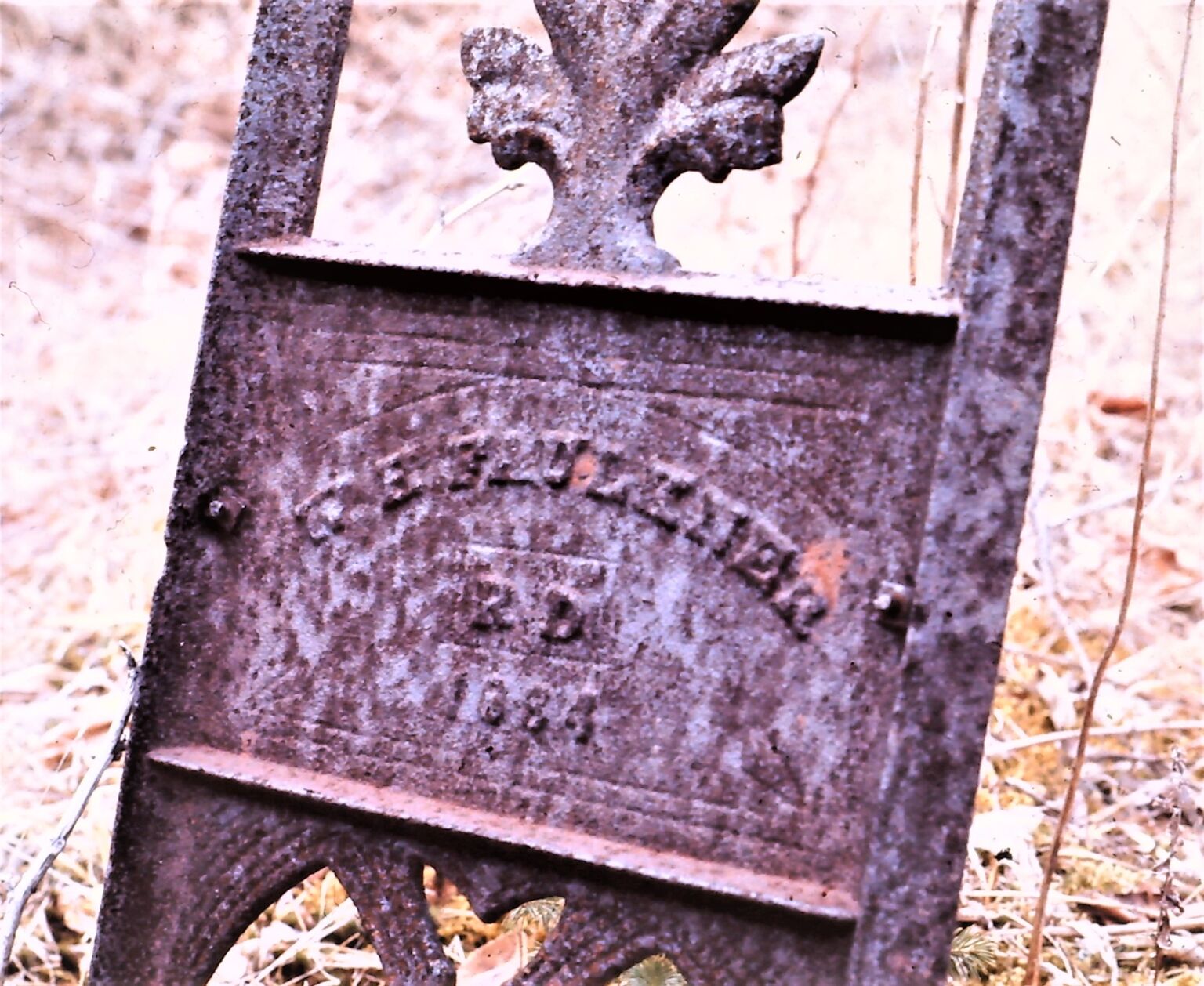 To personalize these monuments, the deceased’s statistics were printed on a card, displayed under glass in a small metal frame. You can imagine how well that worked out: broken glass, water leaks, fading in the sun. I have never seen an original label survive; consequently virtually all of these graves are now anonymous. 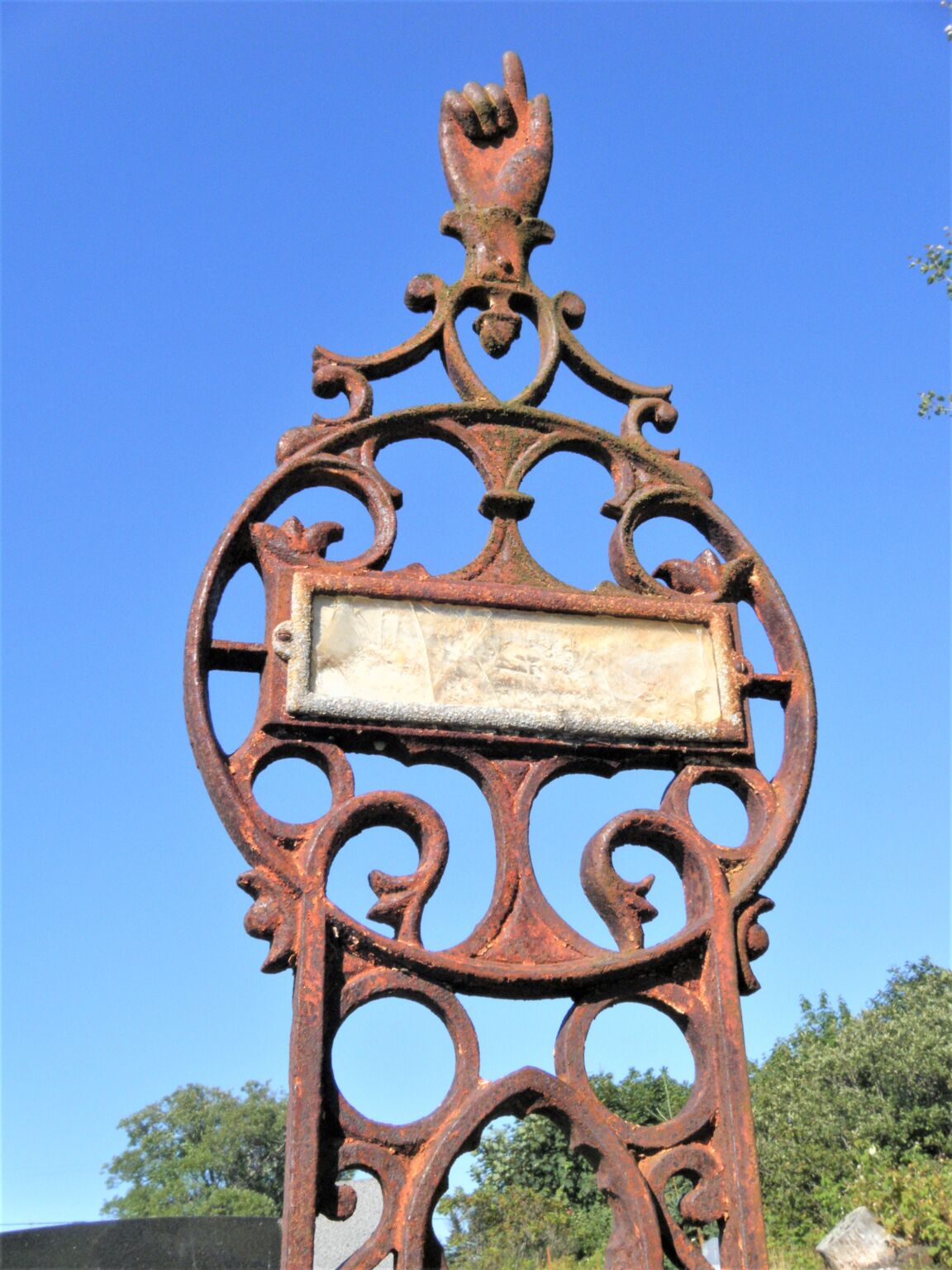 The finials were attached with bolts, so that offered the opportunity for limited customization. The most charming option was a hand with a finger pointing heavenward, showing the way. Not surprisingly these desirable hands often go missing. 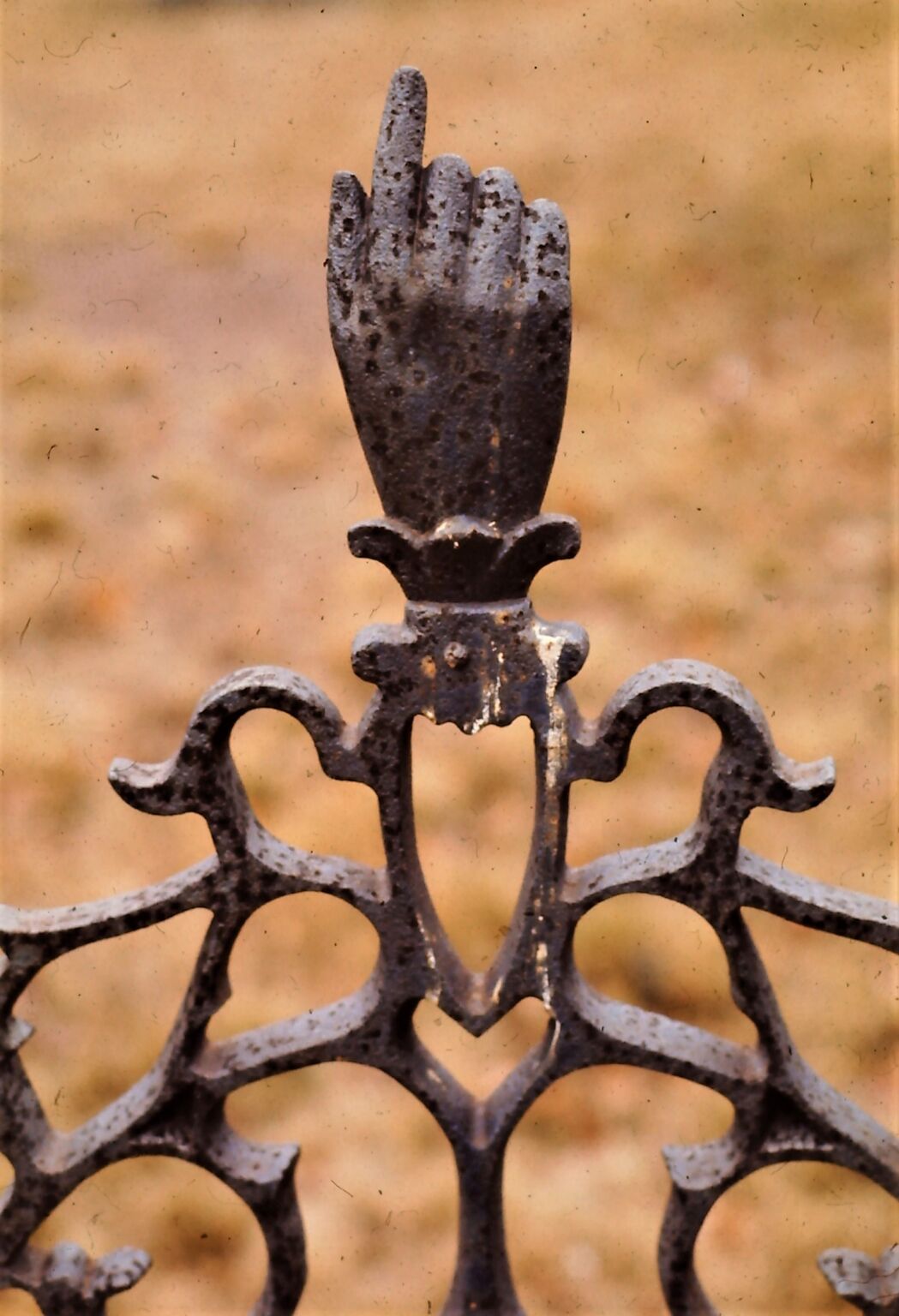 Catholics could choose to bolt on a cross. 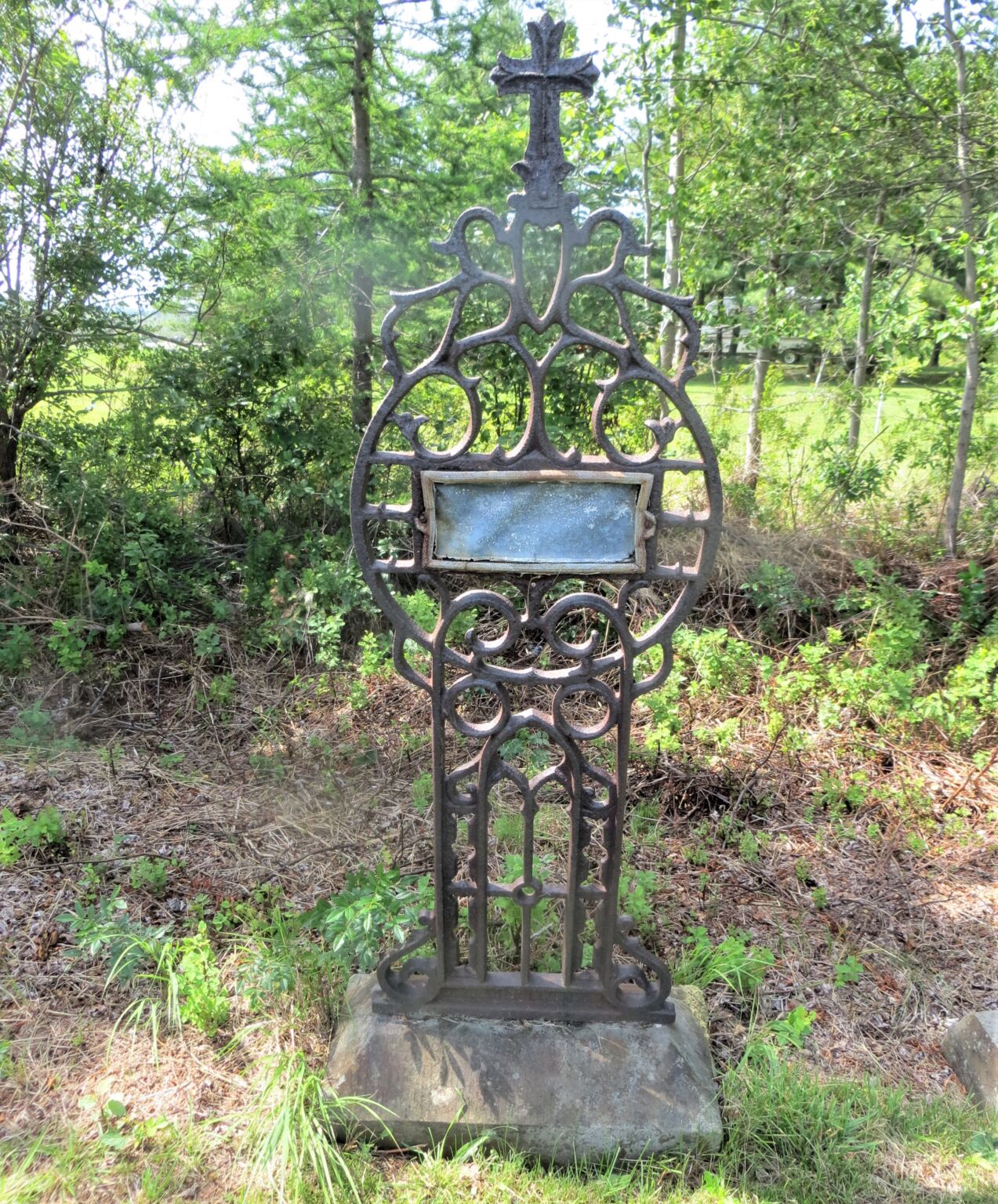 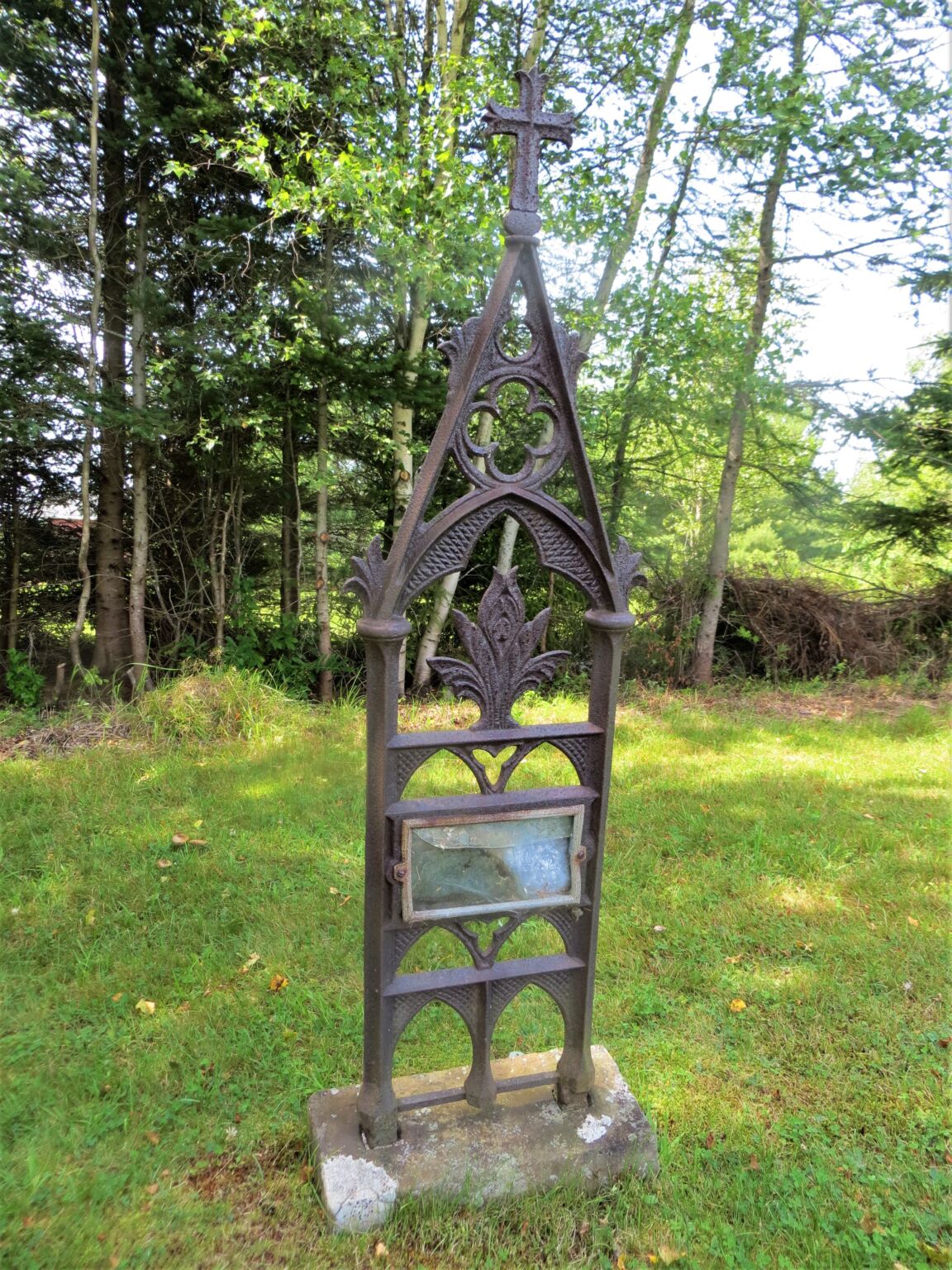 This innovative iron marker was cheaper and more convenient than the traditional, custom-carved stone. The iron survived well, but if the name of the deceased disappears over time, that feels like a big deficiency. I suspect this product was not sold for very long.

In a side note, I only recently learned (with the help of Deborah Trask, the queen of Nova Scotia gravestone research) that W. H. Faulkner was based in Moncton. When I searched for him online, what turns up are references on genealogy sites for W. H. Faulkner, born 1884, no death date. When researchers have recorded names on gravestones, some have mistaken Faulkner’s name for that of the deceased, because that is all there is. Looking on the bright side, these listings did identify cemeteries in PEI and New Brunswick that have Faulkner-manufactured memorials I did not know about!

At the same time that Faulkner was marketing his monuments, also available were similar cast iron designs made by others. These used the same style of frame for the dedication, so they are equally anonymous.

If you look closely there is a sweet cobweb in one of the ovals. 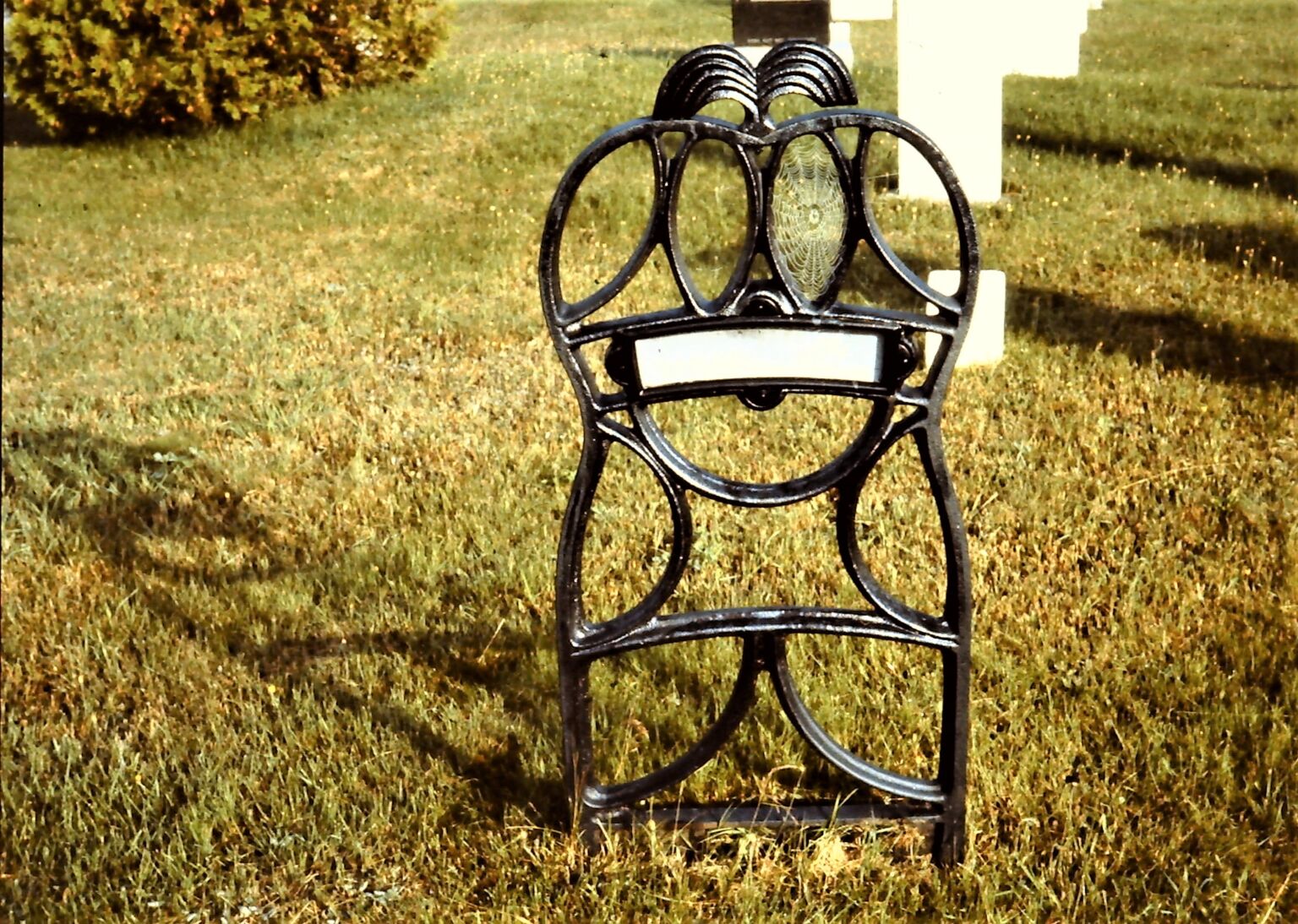 I don’t know what that wing-y thing at the top represents, perhaps a stylized weeping willow, a popular motif on 19th-century gravestones. 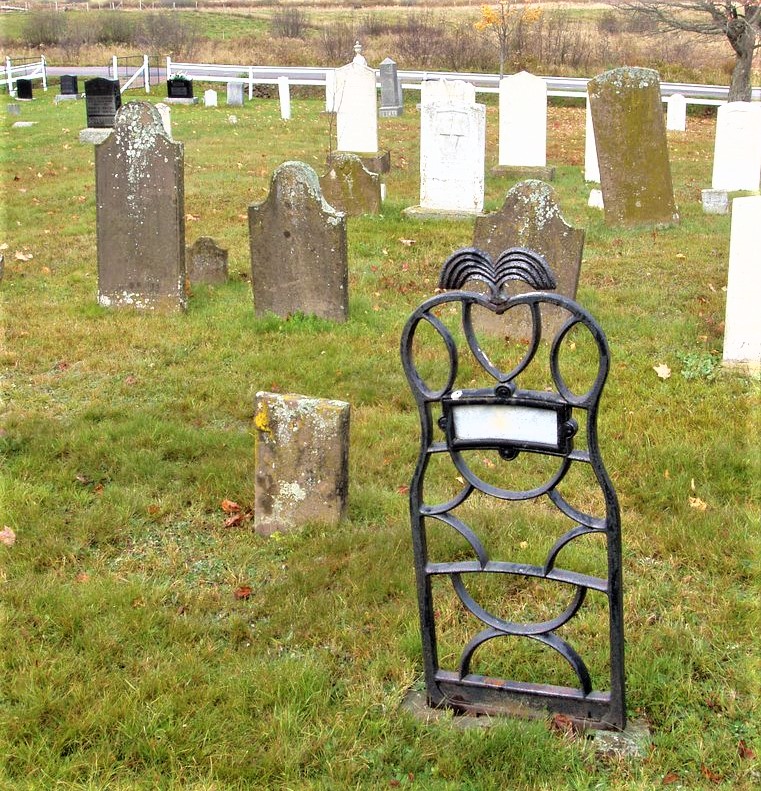 A variety of cruciform styles turn up in Catholic cemeteries. 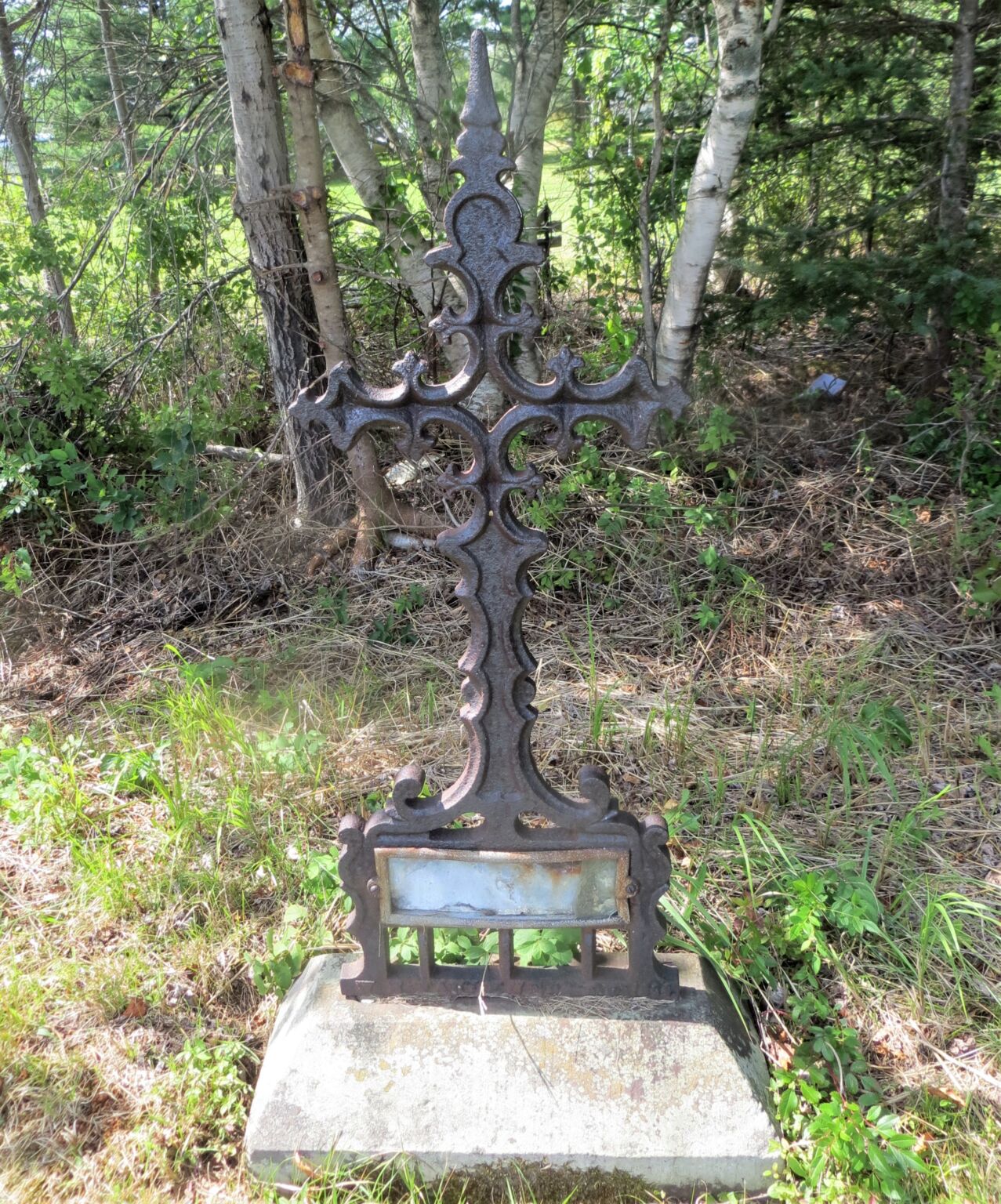 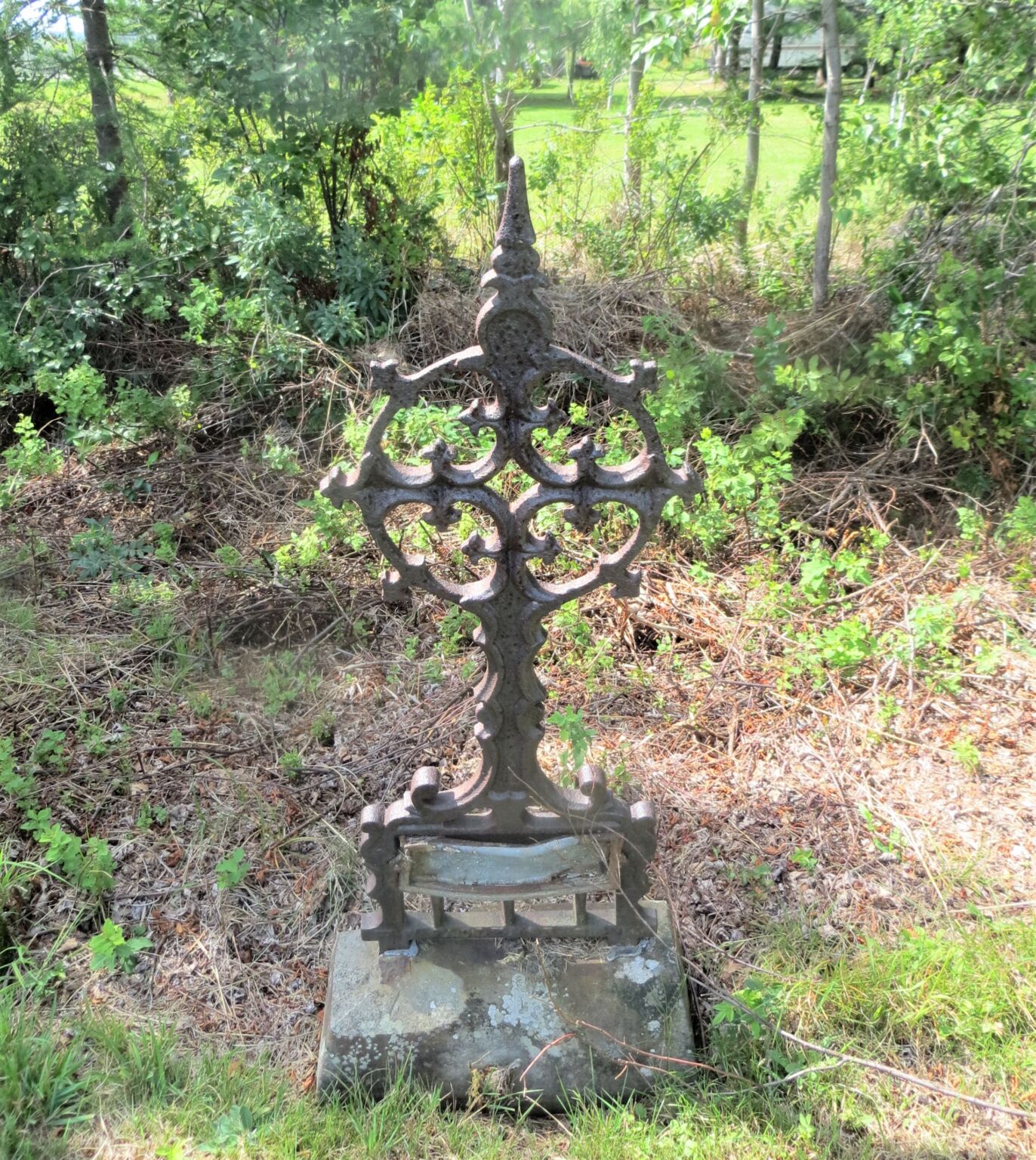 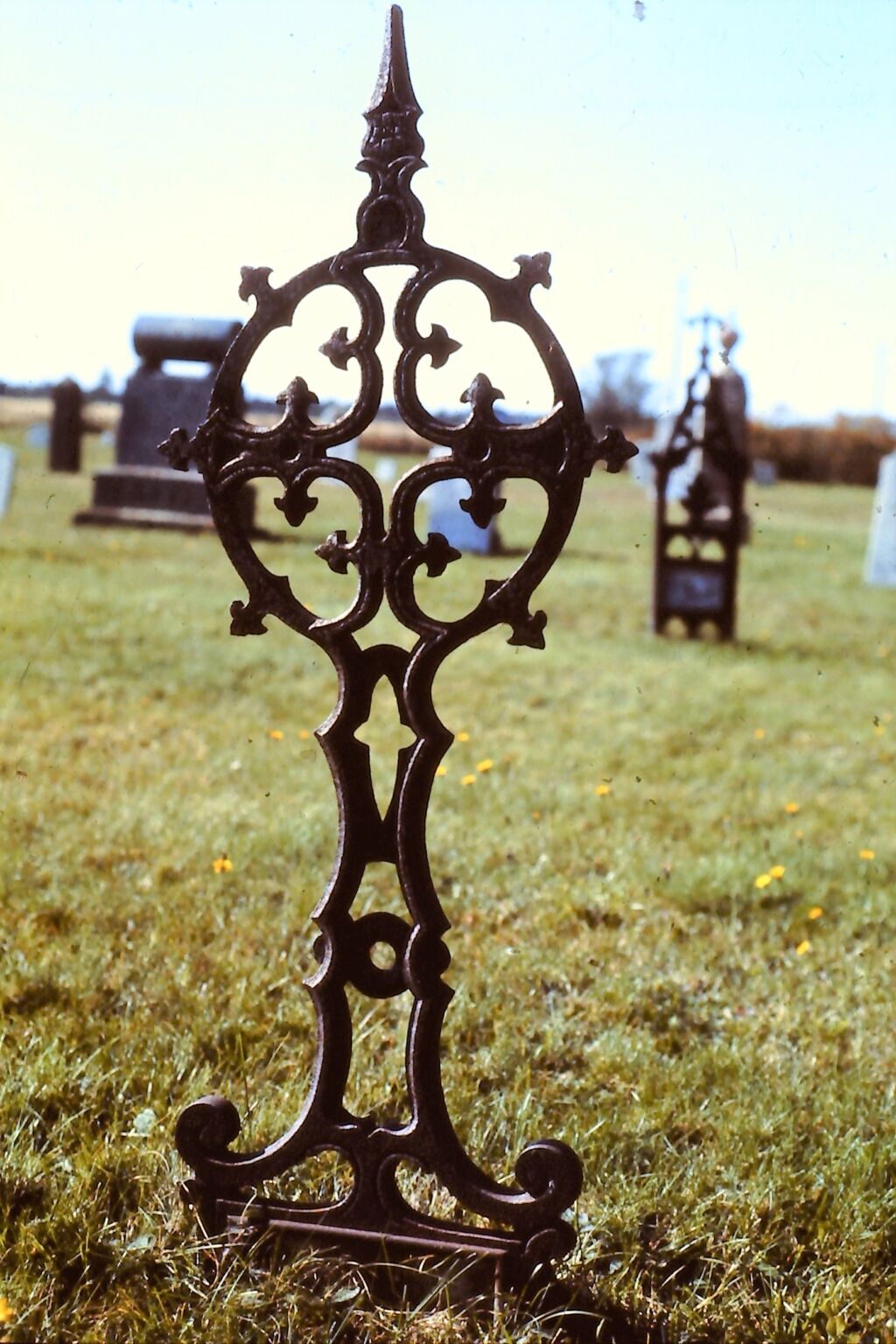 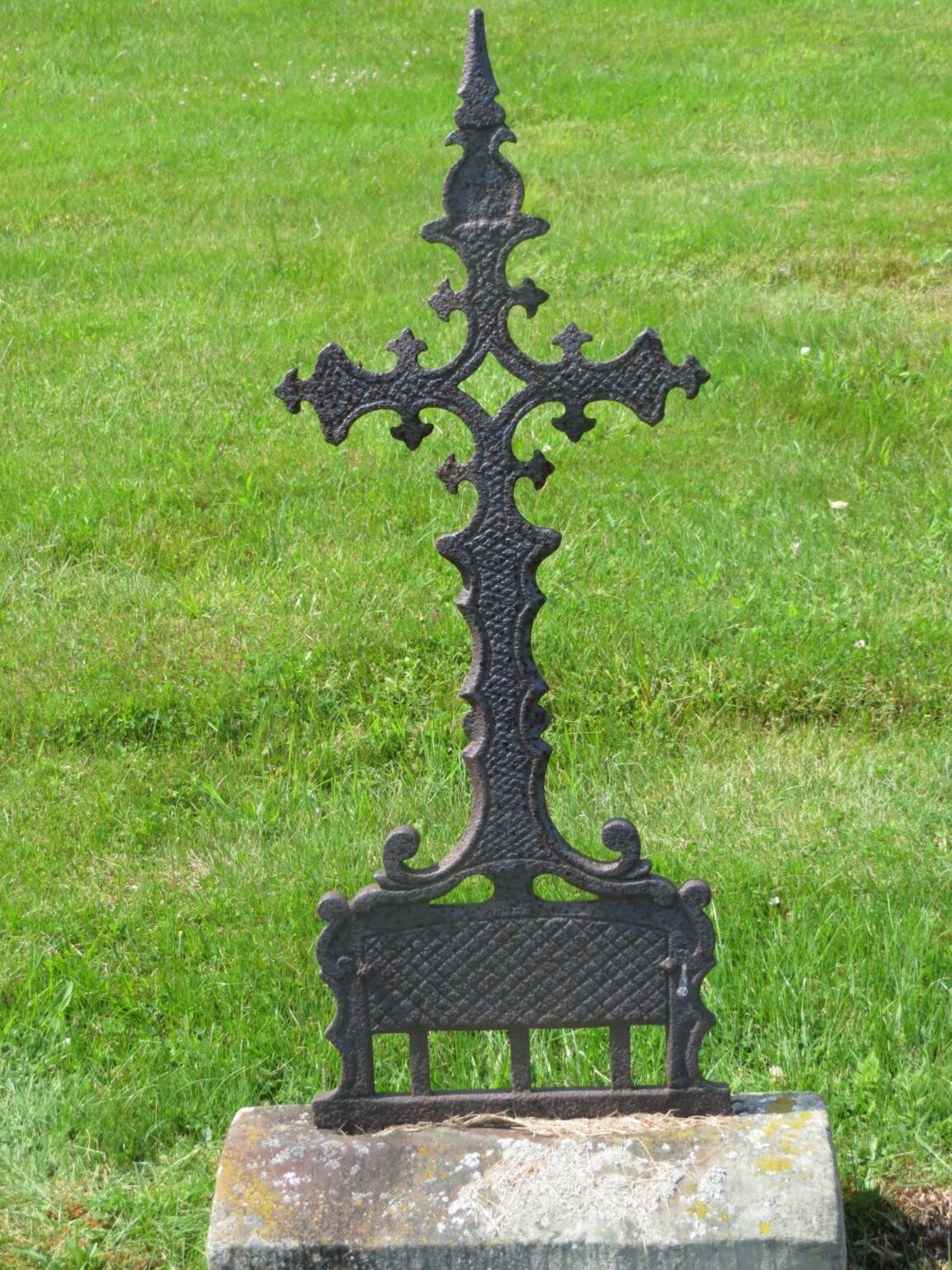 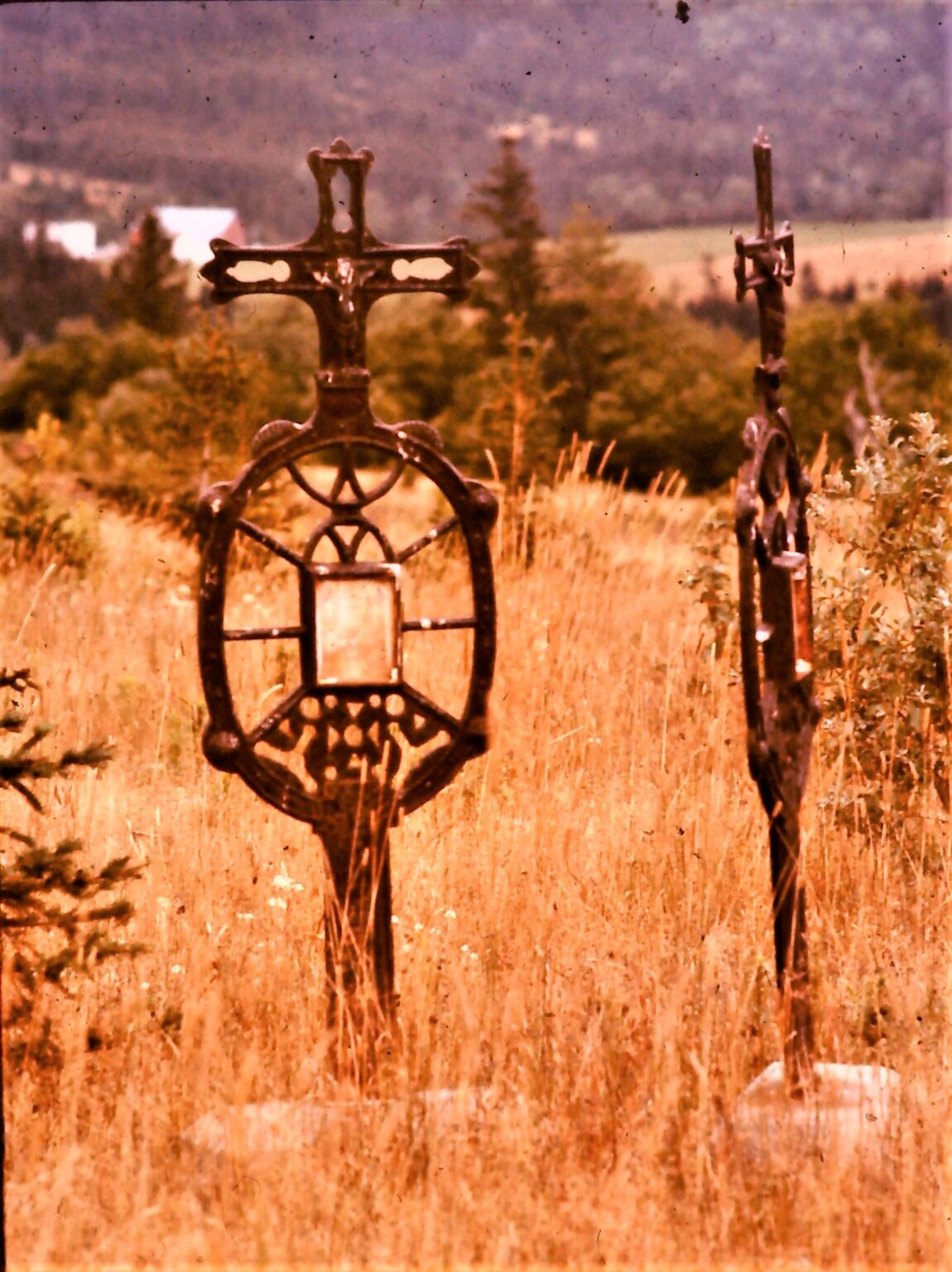 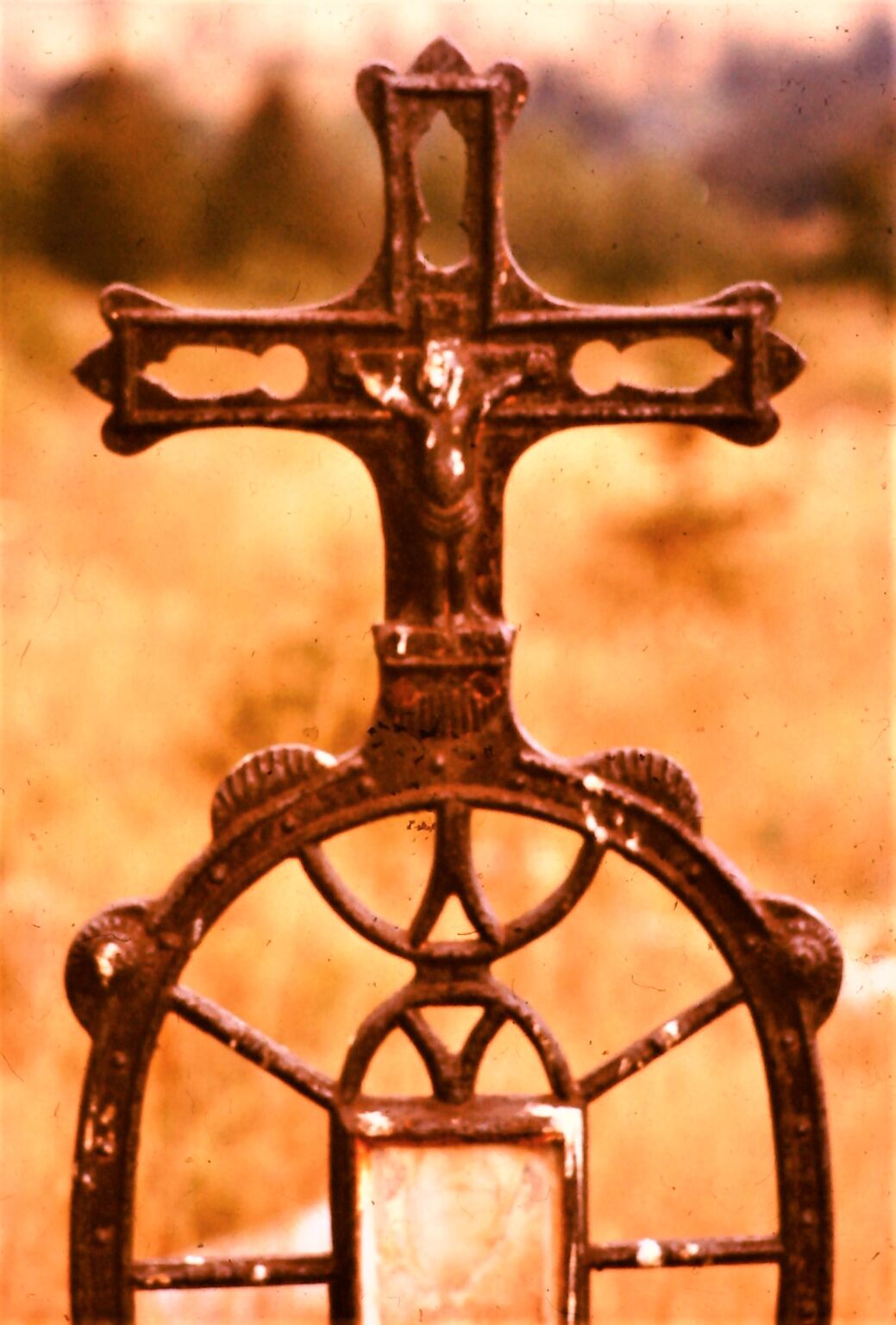 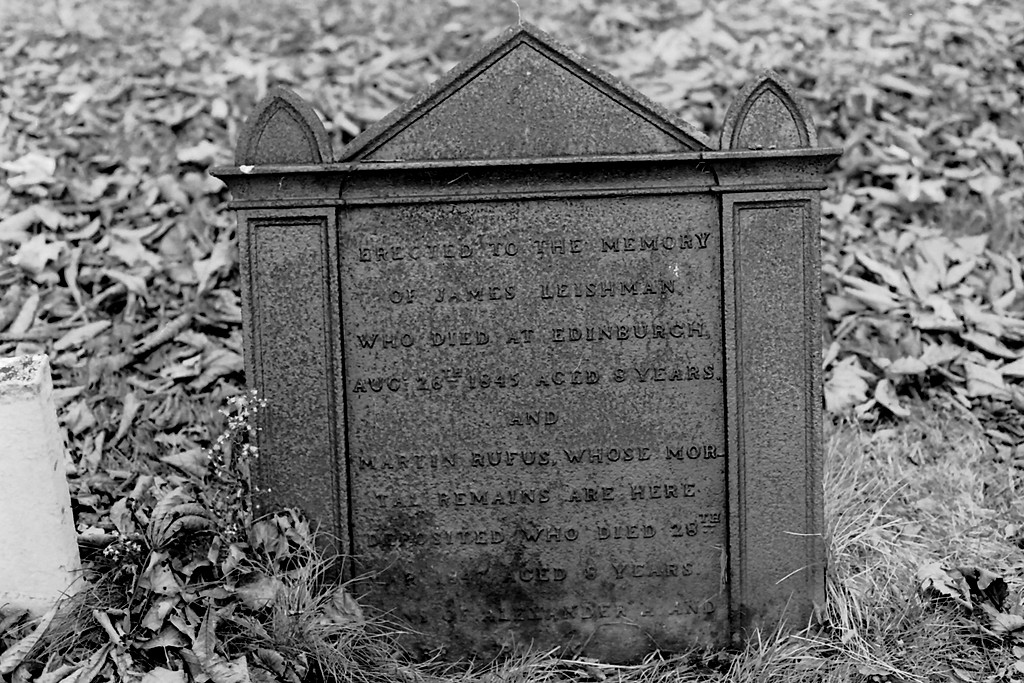 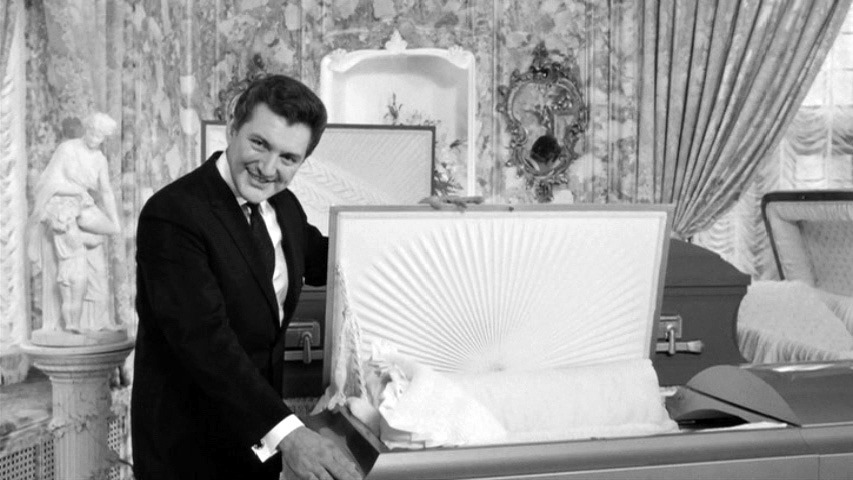