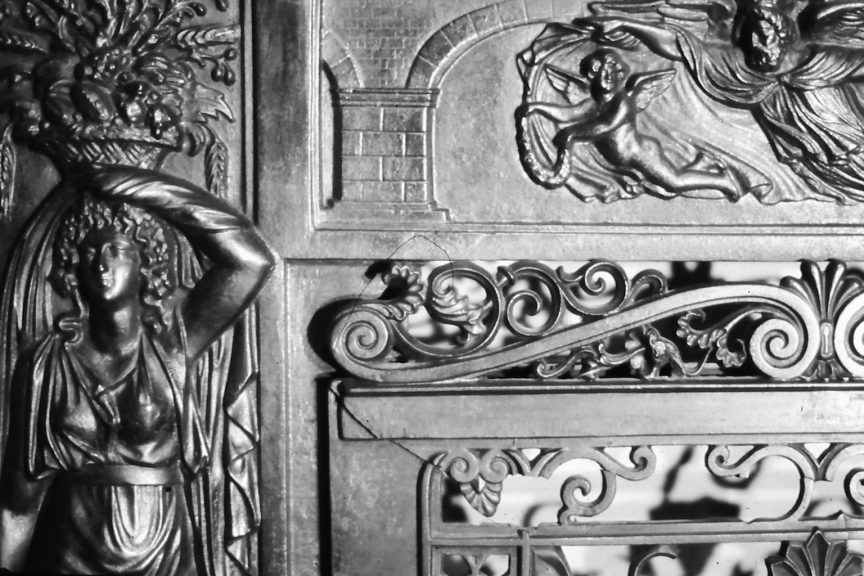 Back in the 70s, I squandered a lot of time searching for one of Nova Scotia’s finest craftsmen, the problem was he had died well over a hundred years earlier. The object of my desire was a Welshman named William Johns. From about 1835 to 1865 he operated iron foundries in Halifax that made the best decorative cast iron ever produced in Nova Scotia. 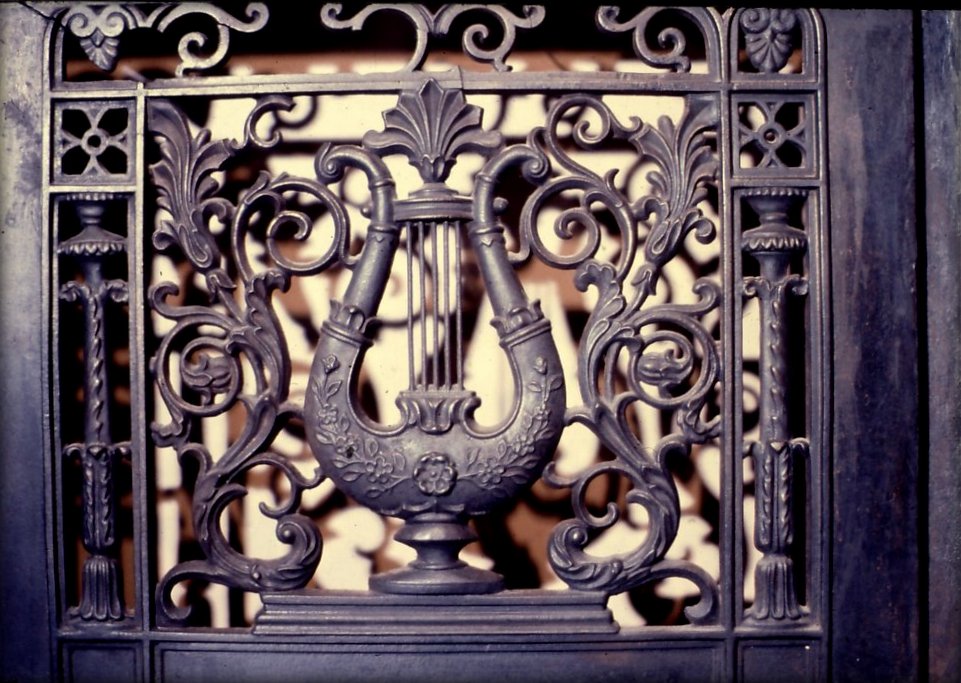 Detail from a fireplace summer front (a panel that fitted in the hearth opening when the fireplace was not used during the summer).

In the later nineteenth century, almost every town in Nova Scotia had an iron foundry making stoves for cooking and heating, agricultural and lumbering machinery, fittings for the vast wooden shipbuilding industry, and equipment for coal and gold mines. The iron foundries have all vanished and so have most of their products.

William Johns started in the early days of the iron foundries in Nova Scotia, and kept his business going for 30 years. His products have a high degree of finish and an elevated sense of design. And most important for us, he marked his work, so 180 years later we can say: Johns made that! 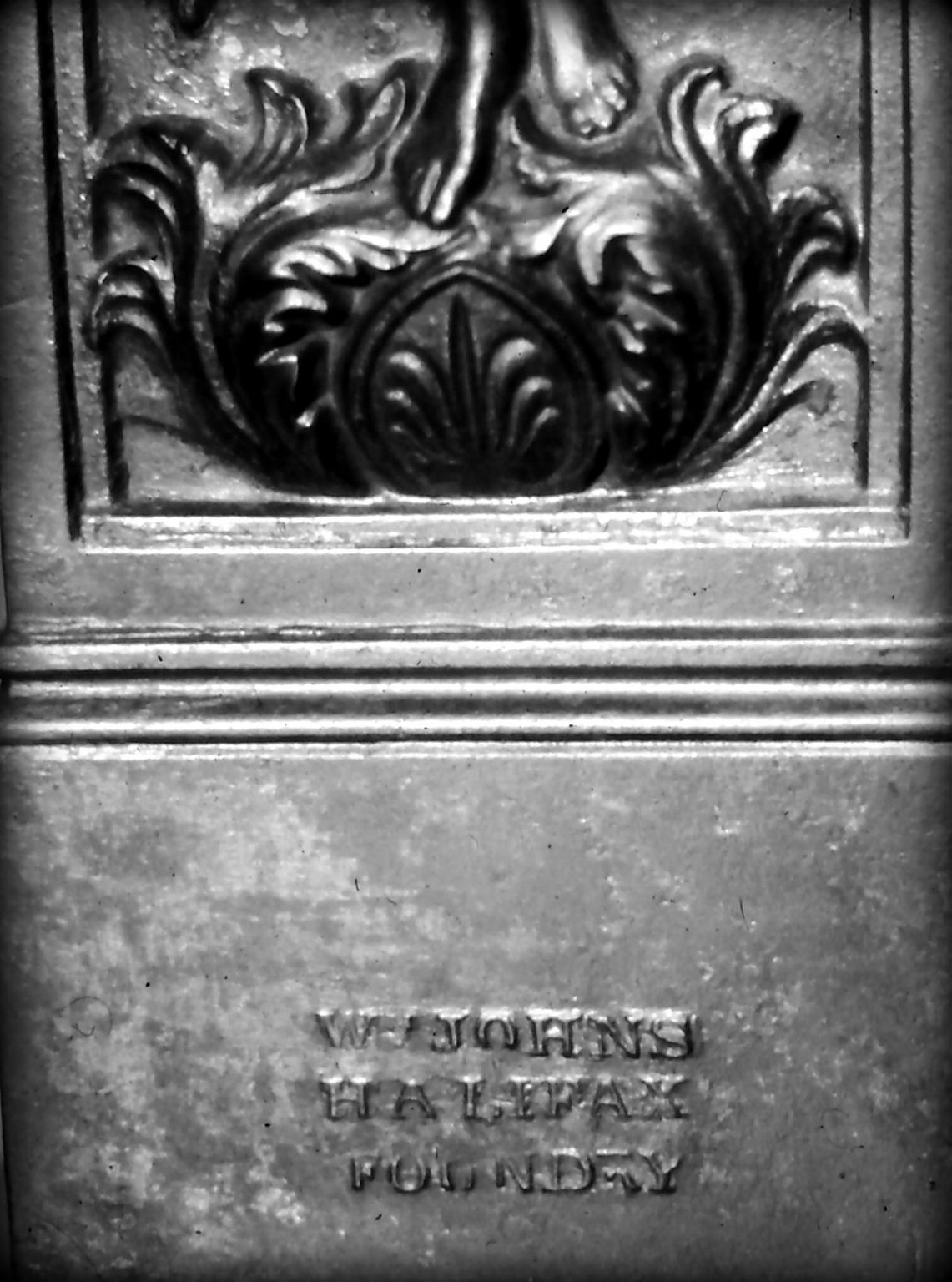 Johns was born in the industrial centre of Swansea, Wales in 1797. He was in Halifax by the mid-1830s, and I assume his training and aesthetic sensibilities were British.

The most impressive Johns casting we know is a classical-themed fireplace surround: ladies with baskets of fruit and flowers on their heads, a lyre in the centre of the summer front, and winged figures floating overhead. I’ve seen four or five examples of this design, often diminished by many coats of paint. The foundry could have made dozens or hundreds of identical surrounds using a master pattern to make molds. (If you need a refresher on how the casting process works, see my blog about a visit to the Lunenburg Foundry). 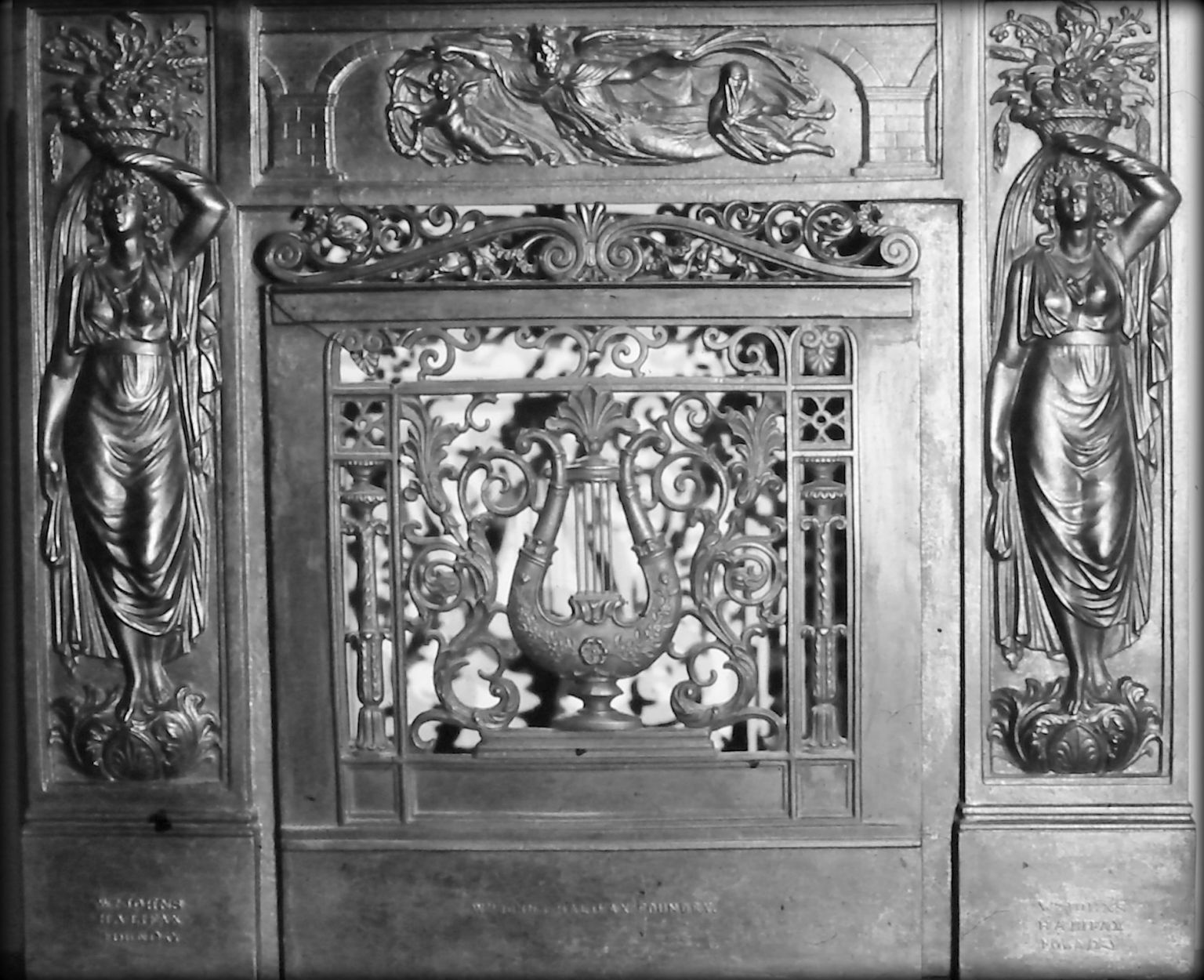 The company name is cast below each lady and on the summer front. In the Nova Scotia Collection

A more common Johns fireplace has a restrained Gothic design. Installed, the iron would be surrounded by a wooden mantle. 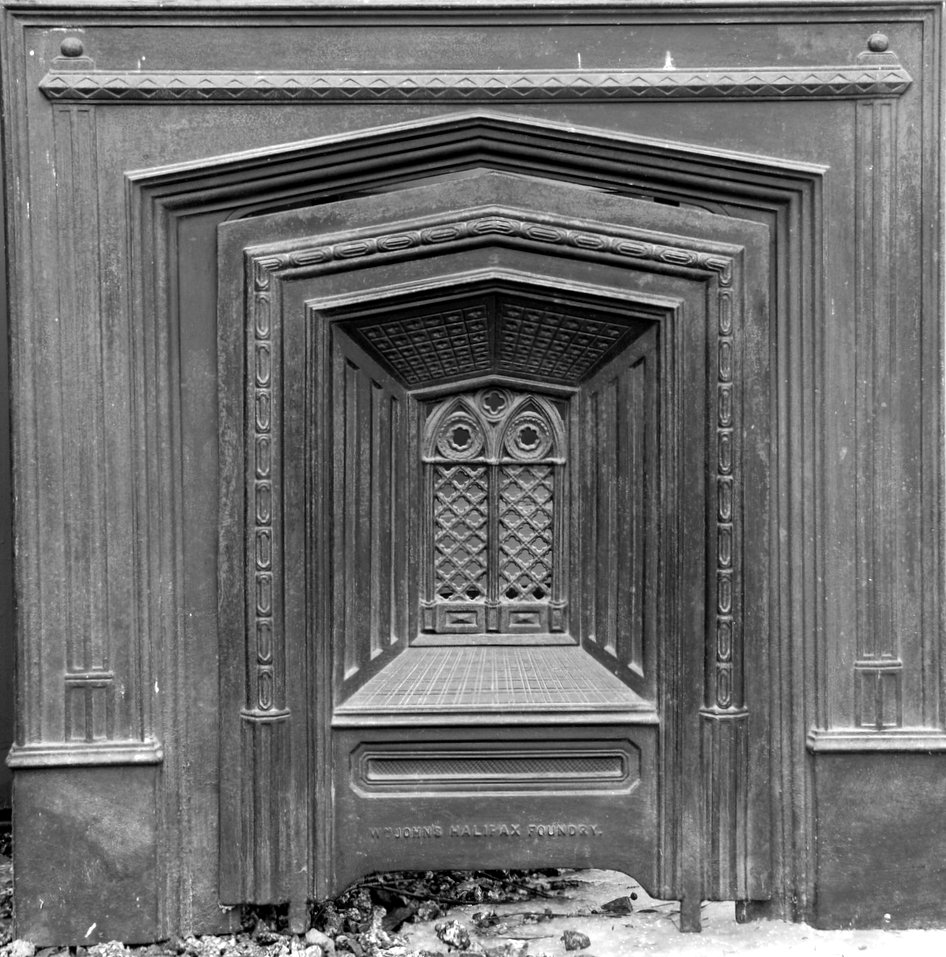 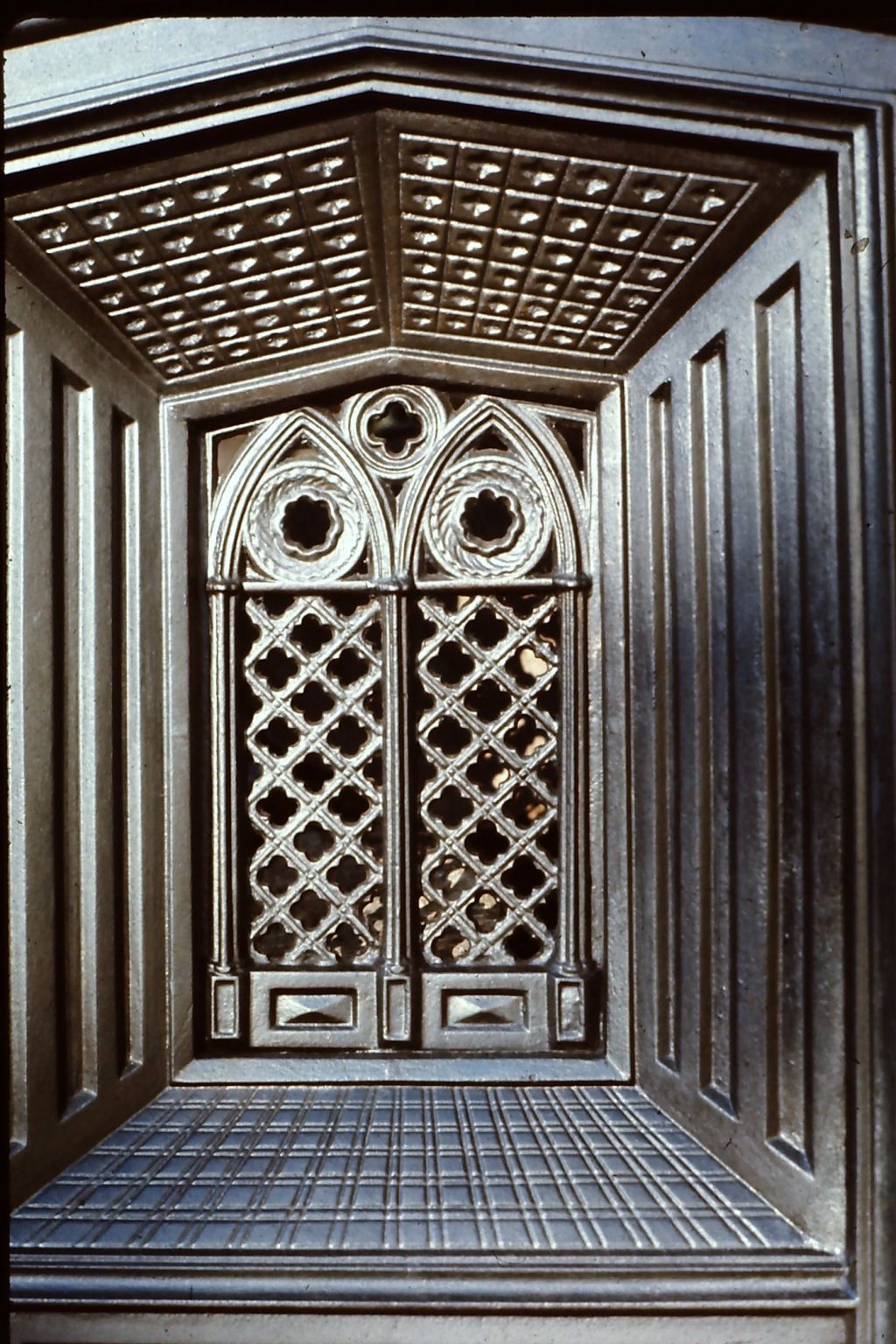 The little pointed arches in the centre of the summer front were cast as a separate panel and attached to the opening.

This 1930s photo shows one of John’s “Gothic grates” in the Trider house , now demolished, that was at the south end of Barrington St.  The house was built around 1820  and the iron insert was probably added some decades later. 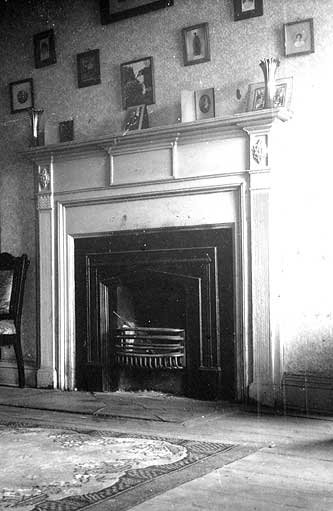 Both of these houses on Morris Street had Johns fireplaces in bedrooms, and many similar houses in the Old South End were Johns equipped. You can usually impress the present owners by complimenting them on their unrecognized William Johns ironwork. 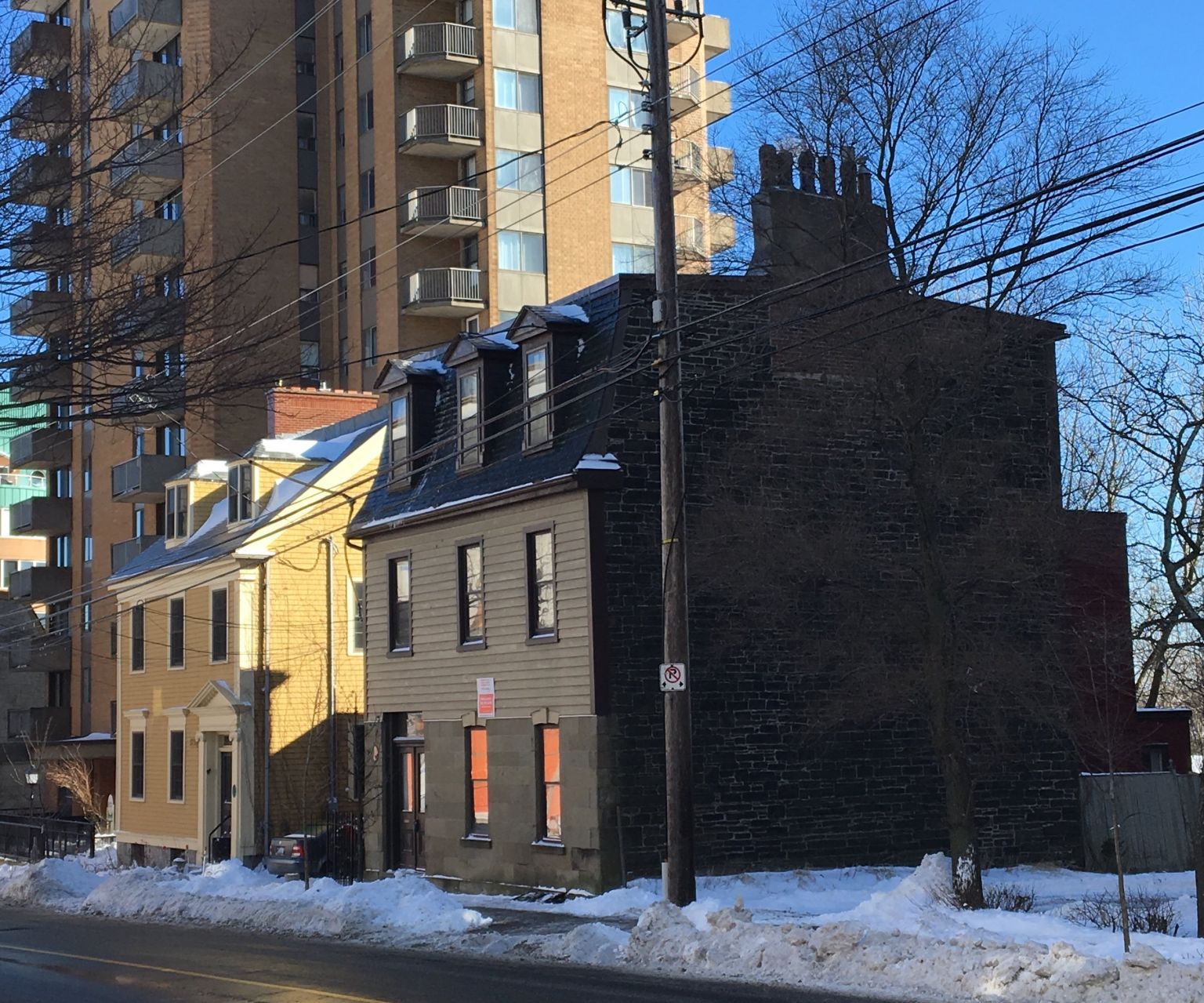 This freestanding fireplace has decorative detailing that would fit with classical revival styles popular in the middle of the 19th century. 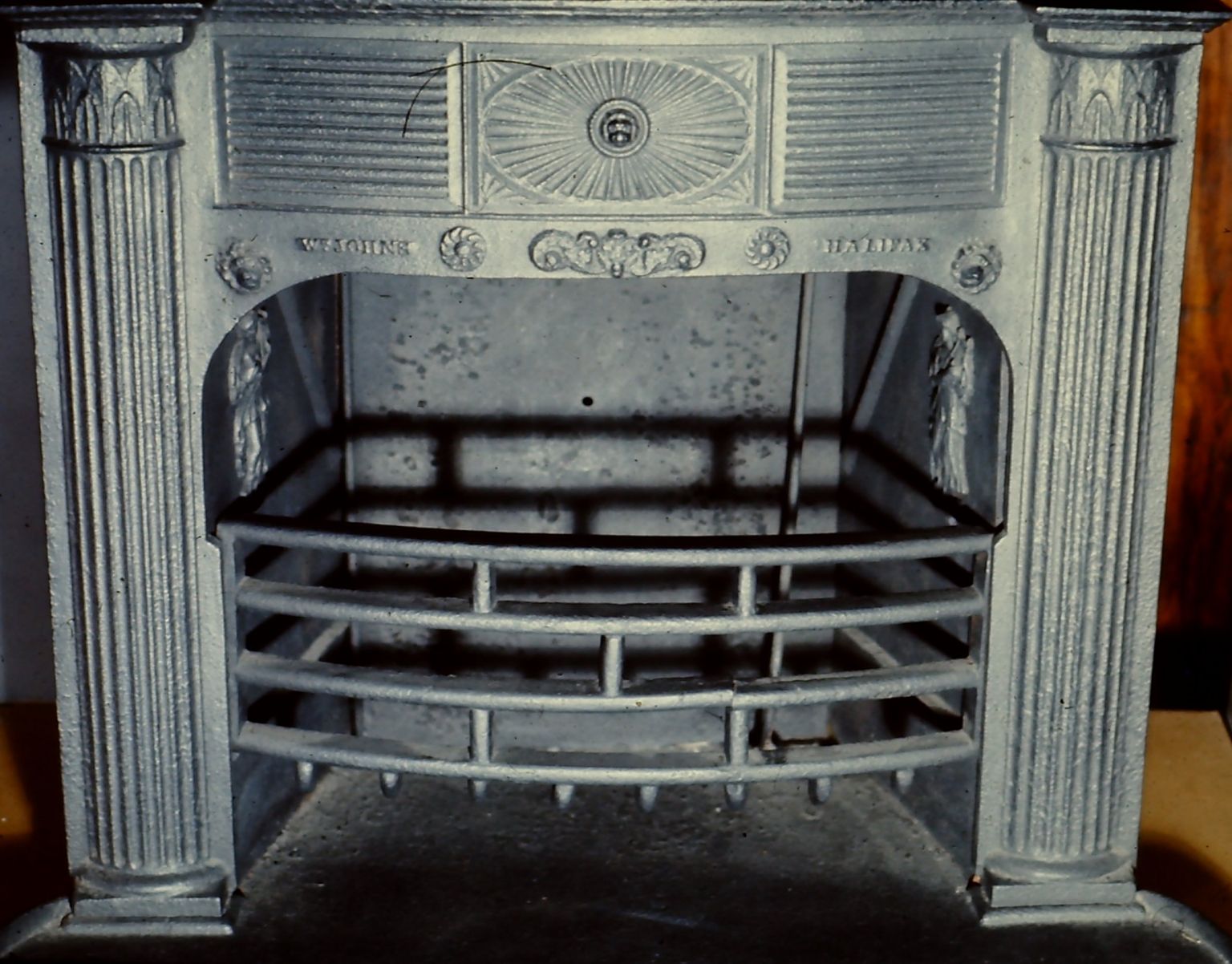 Johns prominently displayed his name above the opening. In the Nova Scotia Collection

Cast iron fireplace surrounds like Johns’ were sometimes retrofitted into older wood-burning fireplaces, because they came with grates for burning coal, the new miracle fuel. This was probably the case with the big fireplaces in the Red Room at Province House. The ornate mantles (not shown in this photo) date from when the Legislature was built c1817 and the Johns iron insert was probably added about 20 years later. 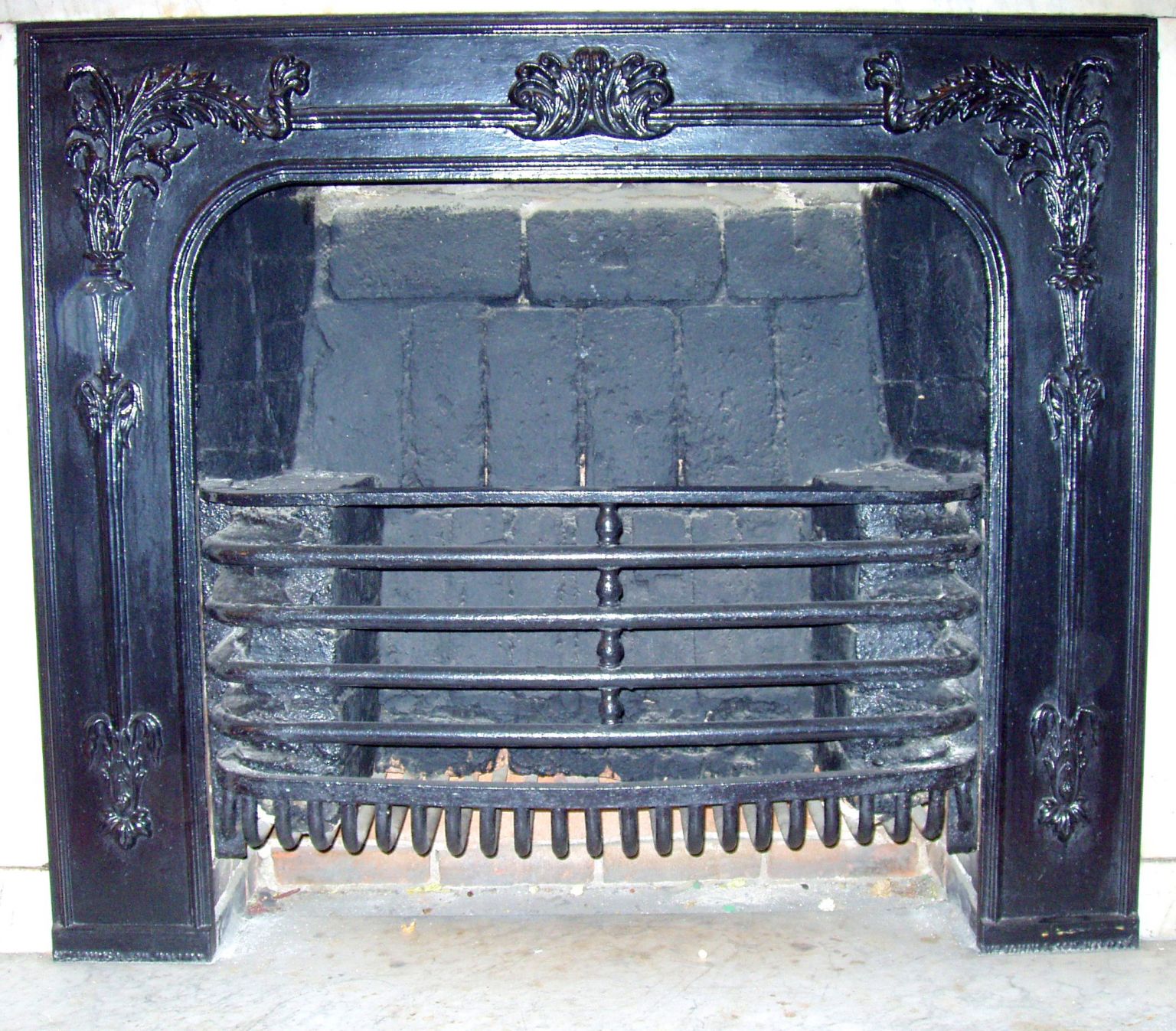 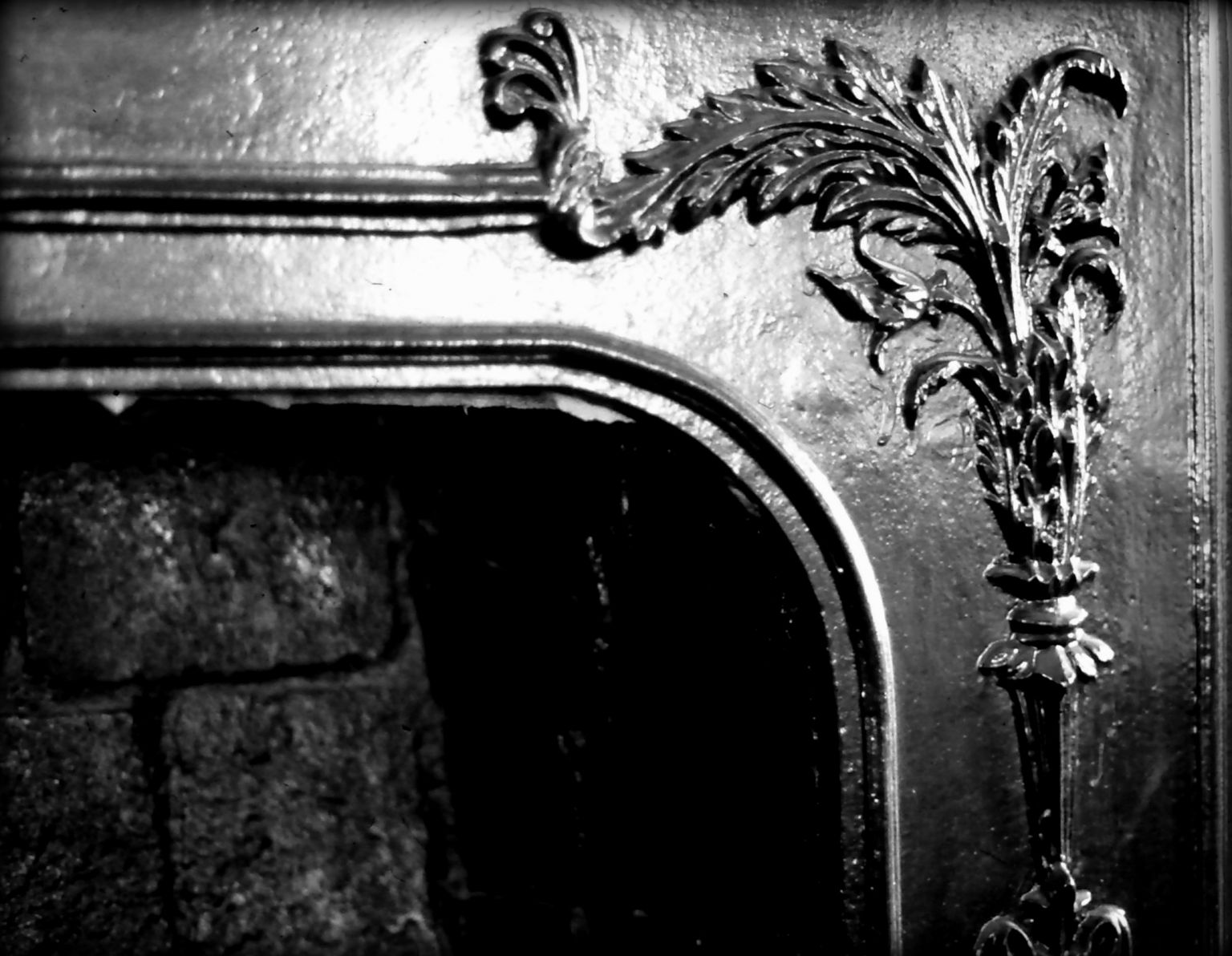 The Red Room fireplace surrounds are super large and probably made specifically for this application.

In the early part of the nineteenth century people were still discovering all the things you could make with cast iron. When Halifax opened a modern, new cemetery on Camp Hill in 1844, some of the first markers were up-to-date cast iron made by Johns. About a dozen examples survive. 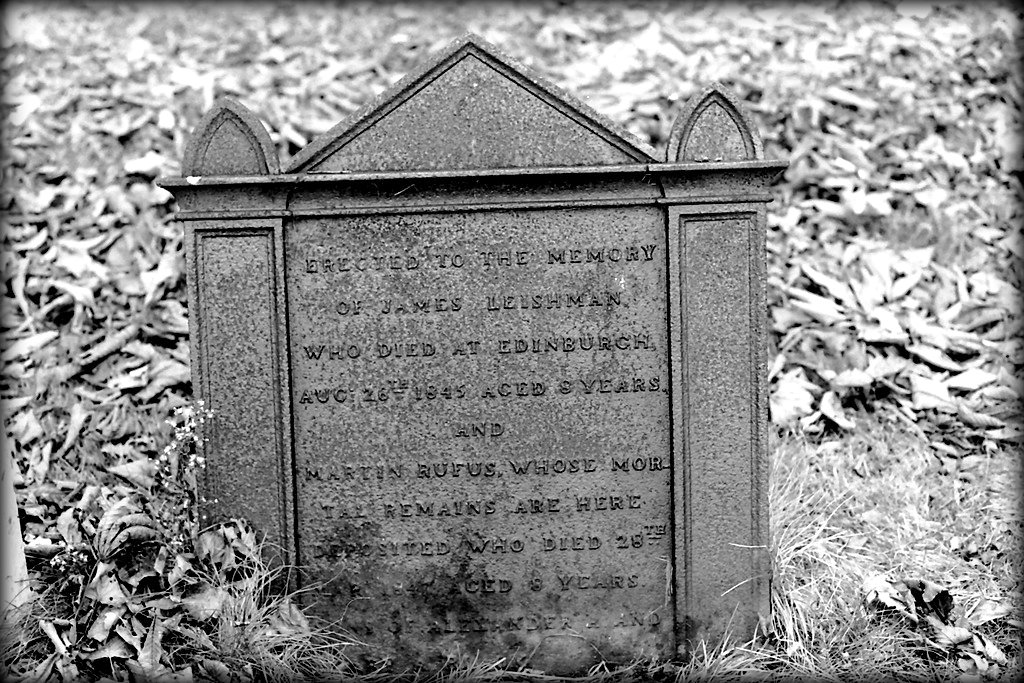 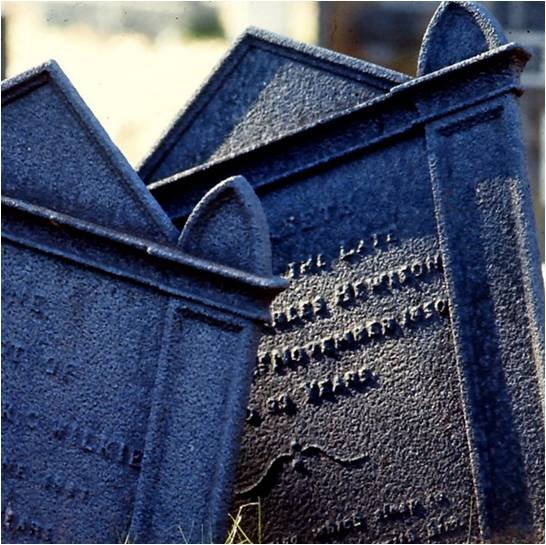 Some of Johns’ products can be found in Hants County. A beautiful pair of little grave markers are in a roadside cemetery in Gore. With clean, country air, the 1852 marker for Luke Hamilton remains in perfect condition. Quite a contrast to the markers in Camp Hill, pitted by the polluted city air, some of it from coal fires in Johns fireplaces. 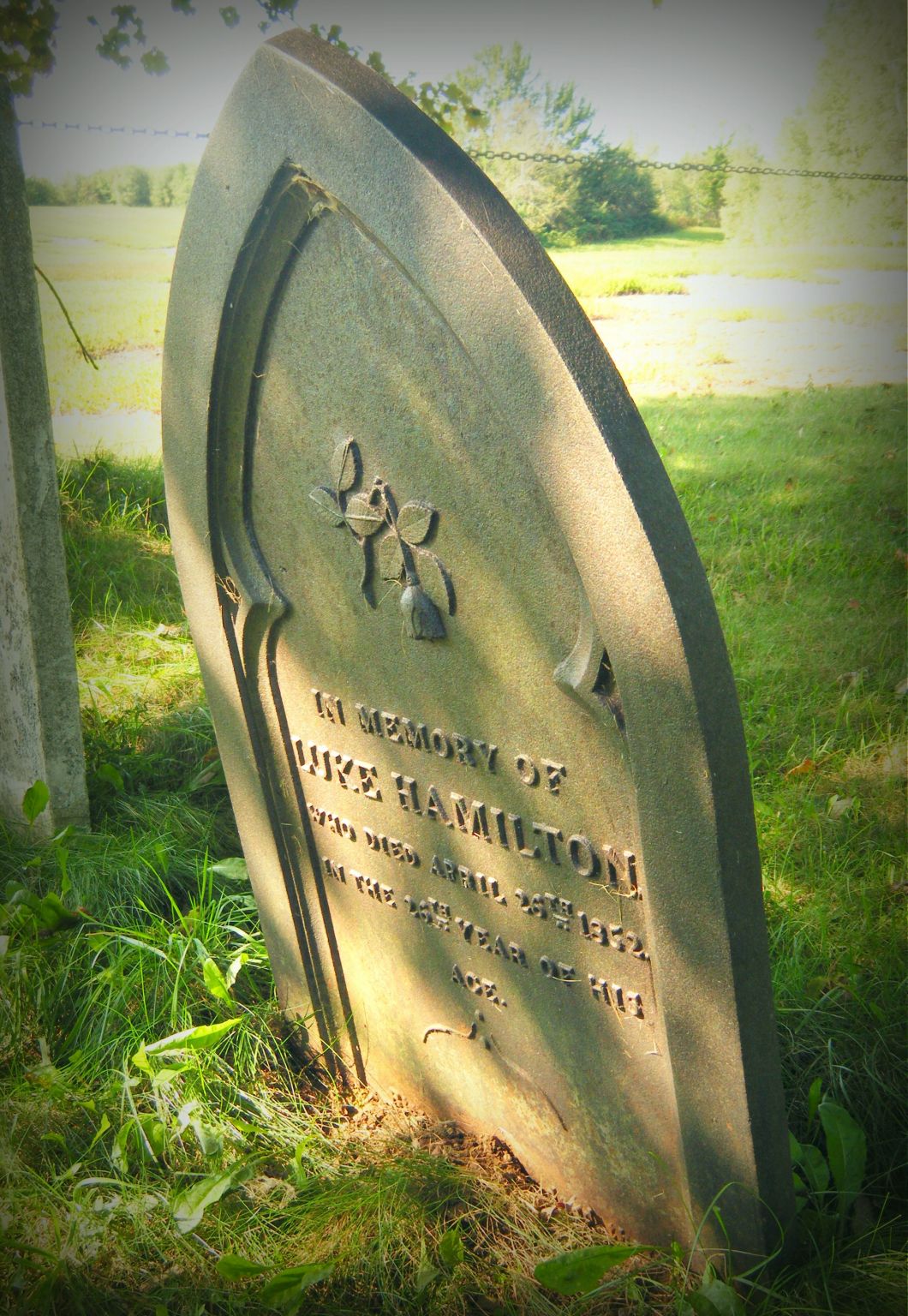 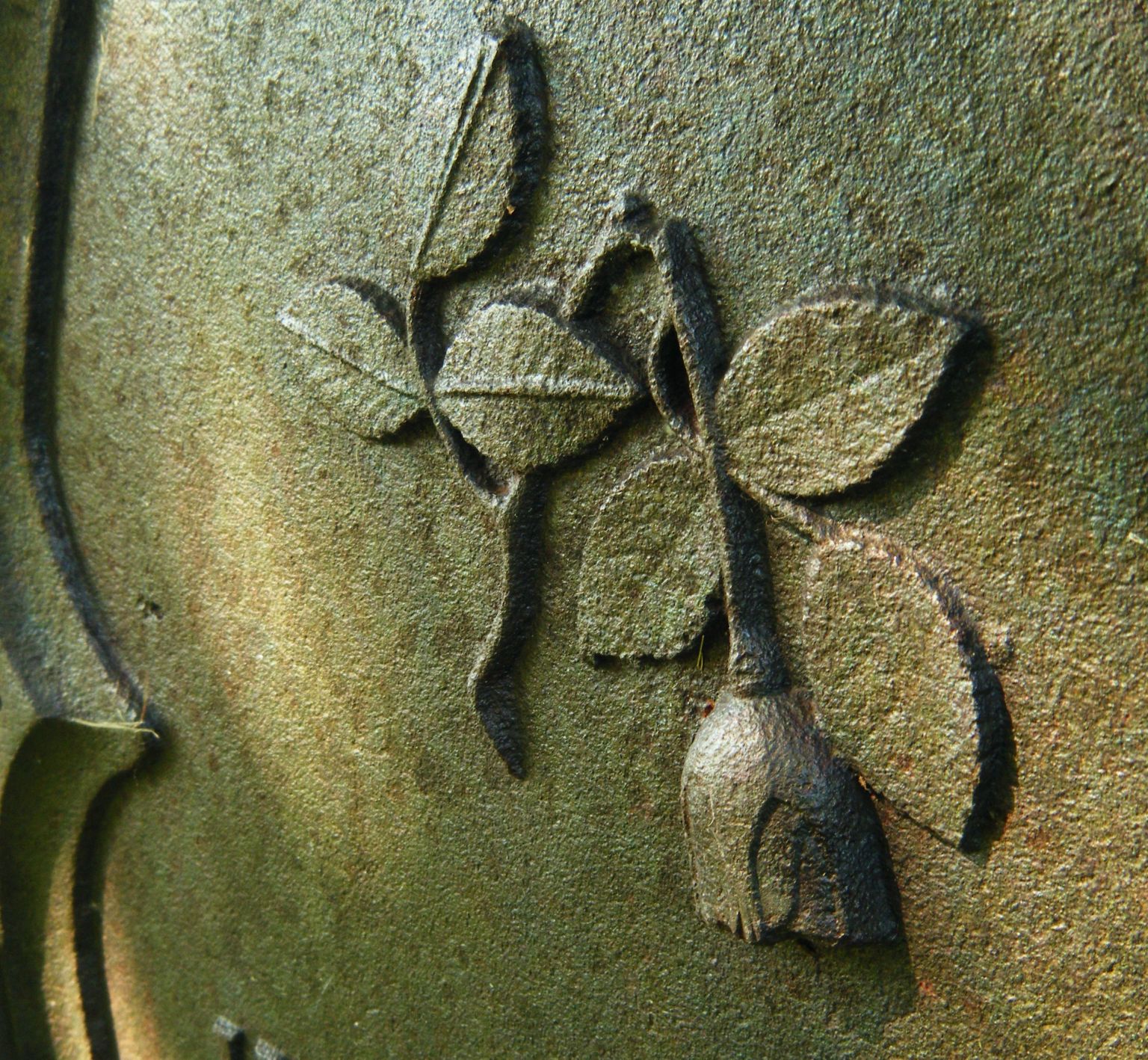 The broken rose is a common motif on grave stones. There is a good chance that the iron markers were originally painted to look like sandstone or marble. 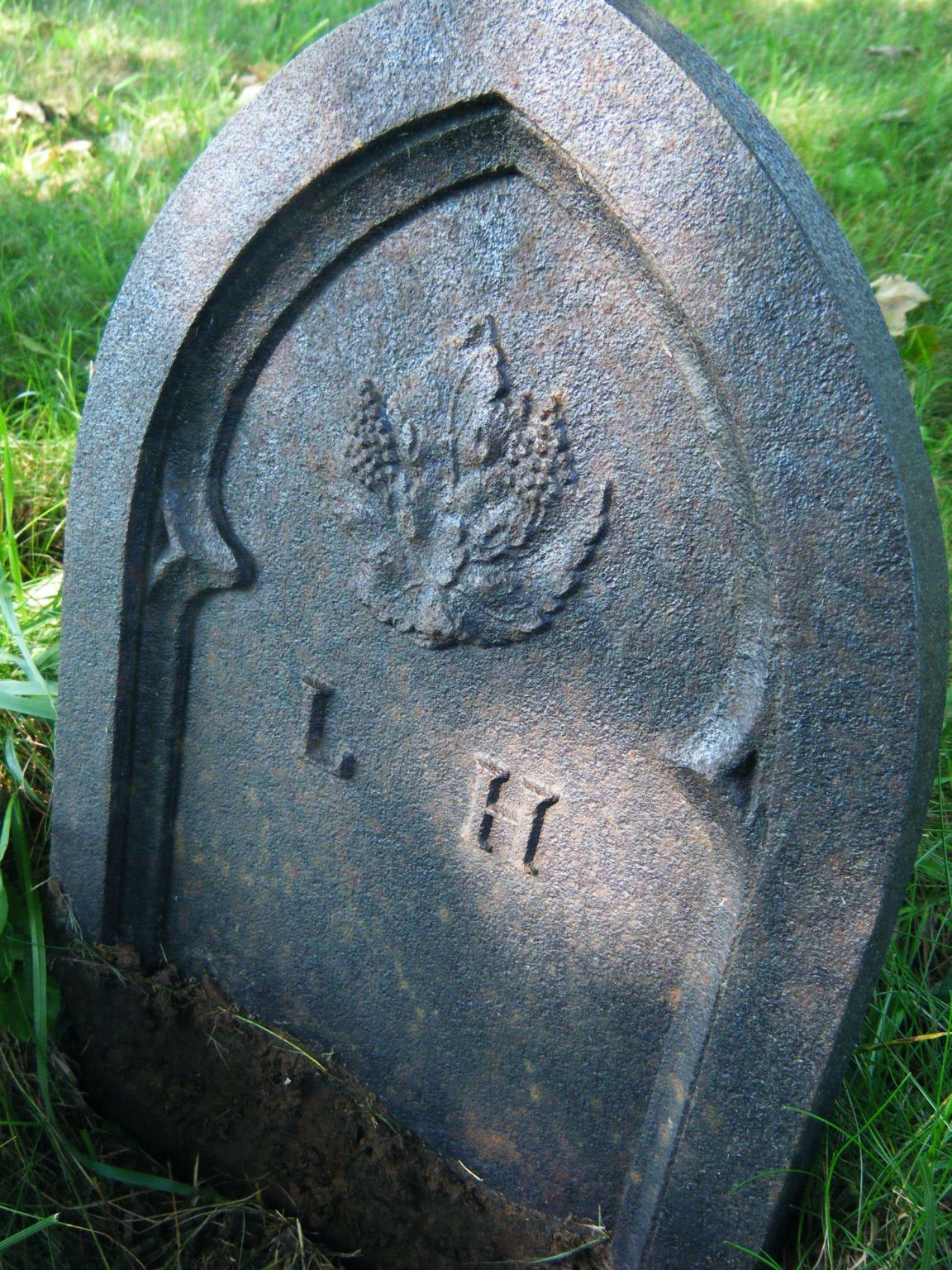 Over the years, Johns operated his business from various locations but his foundry was ultimately located in the block bounded by Maynard, Cornwallis and North Park streets. The north boundary was Johns Lane, now called Armoury Place, that runs beside the Armoury.

In this block, facing the Commons, was a house that may have been Johns’ home at one time. In the 1870s, when this photo was taken, it was the Protestant Orphanage. Notice the tidy orphans arranged in front of an iron railing (wonder where that came from?). 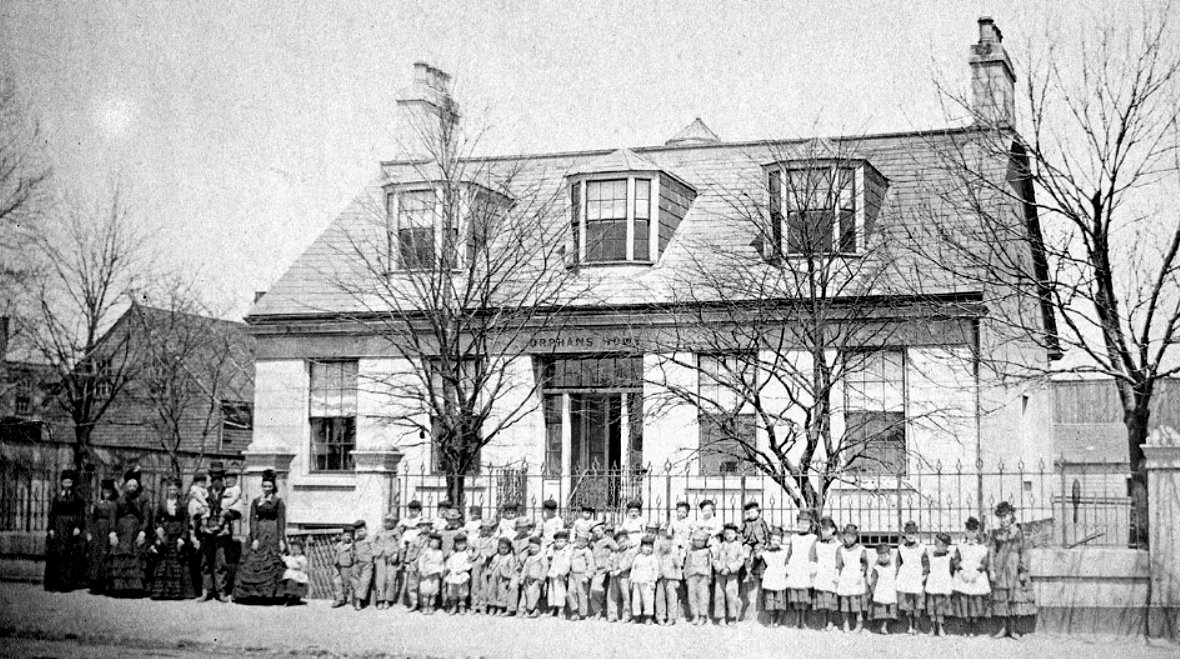 You can still see the granite wall that supported the railing along North Park Street. For a detailed history of this fascinating site, check out Nat Smith’s blog from 2014. 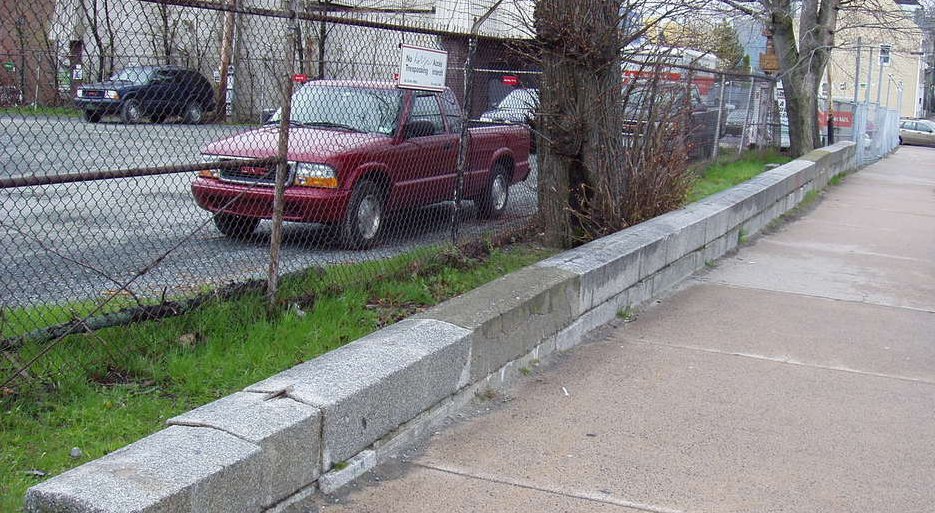 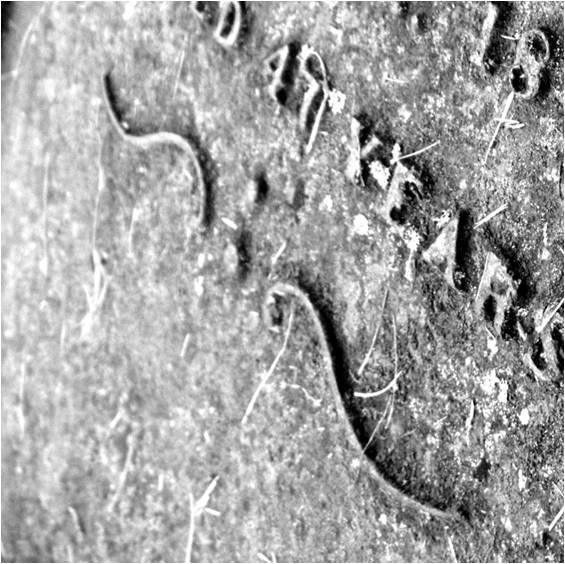 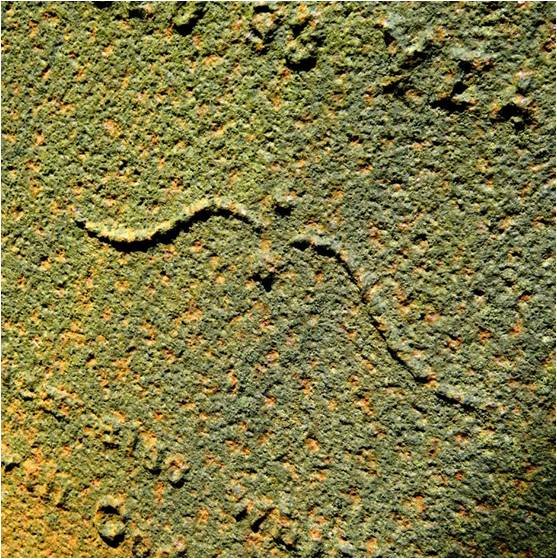 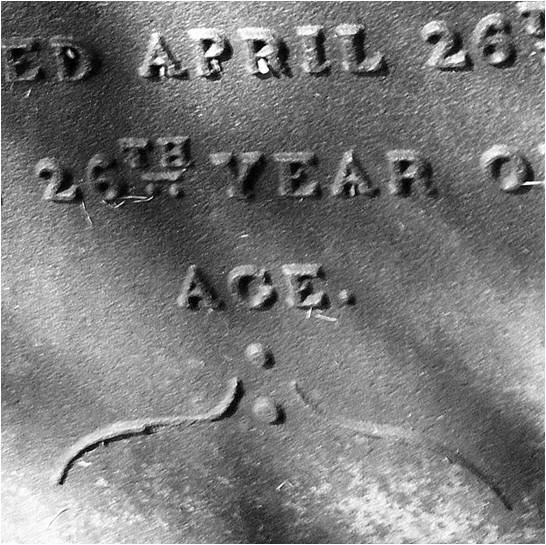 I wonder if he was familiar the “line of beauty,” a theory of aesthetics developed by the eighteenth century British artist William Hogarth. According to this theory, S-shaped curved lines signify liveliness and activity and excite the attention of the viewer,  just the thing for a grave marker. 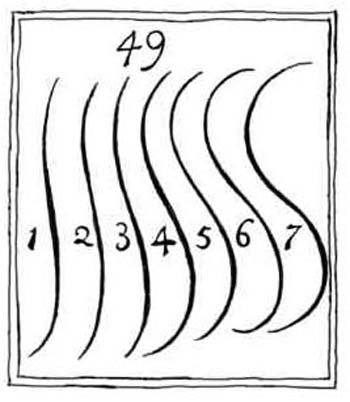 Examples of lines of beauty from Hogarth’s treatise. Wikipedia will tell you all.