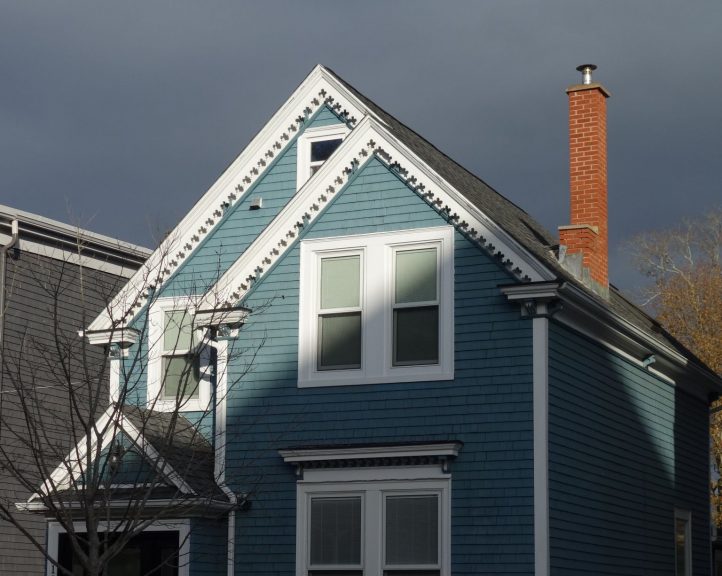 Urban planners say a good walkable street will offer something interesting to see every 6 seconds. Most of my recent walk from Mass Ave in the north to the Dalhousie Campus would qualify. Once I got off the wasteland part of Robie, I was propelled by what Tina Brown (promoting her new book) calls observation greed.

On Clifton Street an odd circle and keystone design over the entrance to an underground parking garage made me pause. Perhaps the logo for an organization plotting world domination? Just a guess, could be wrong. 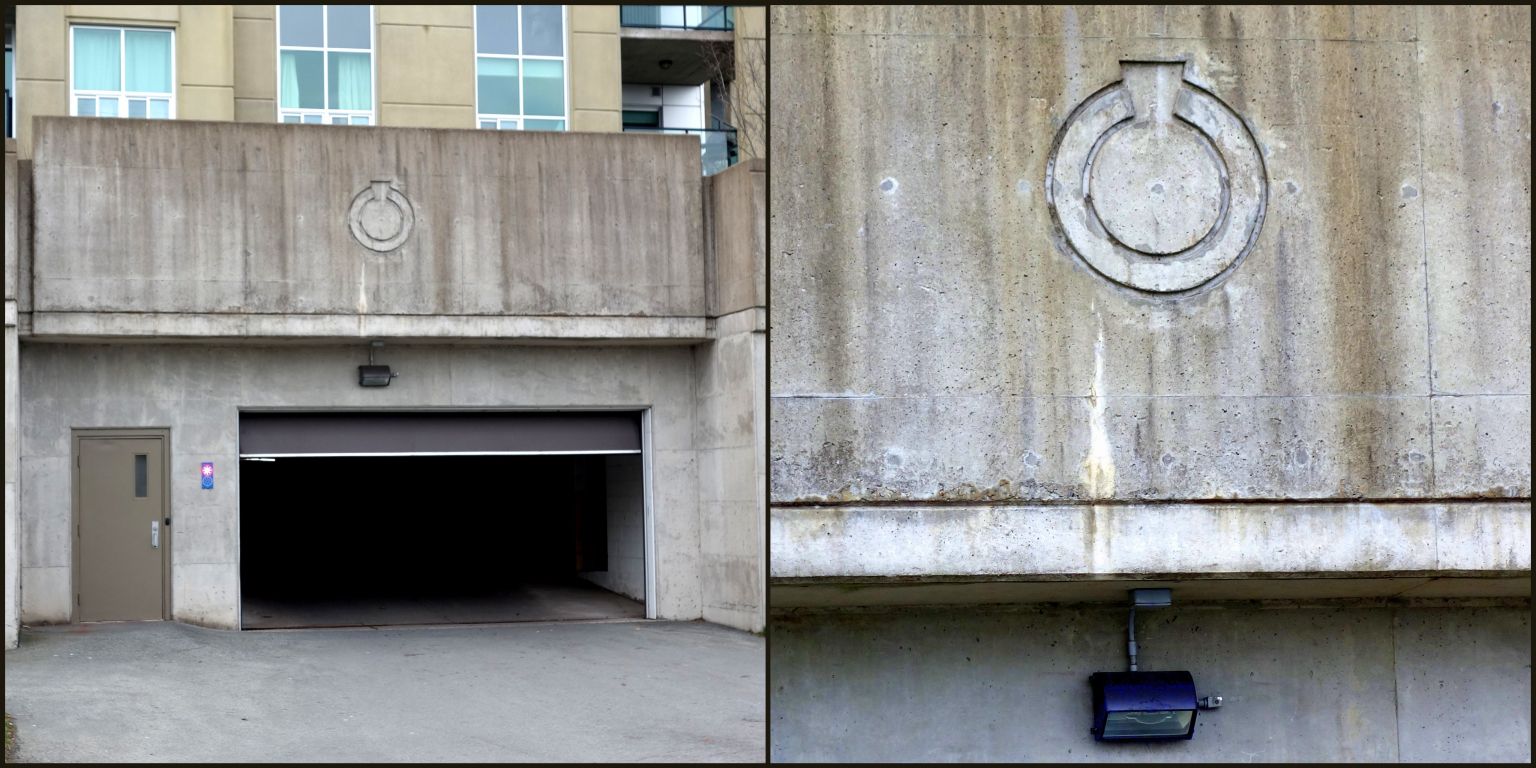 Further down the street was a beautiful piece of assemblage art:  a c1970 Chevy Nova muscle car and a garage with a sympathetic roofline. 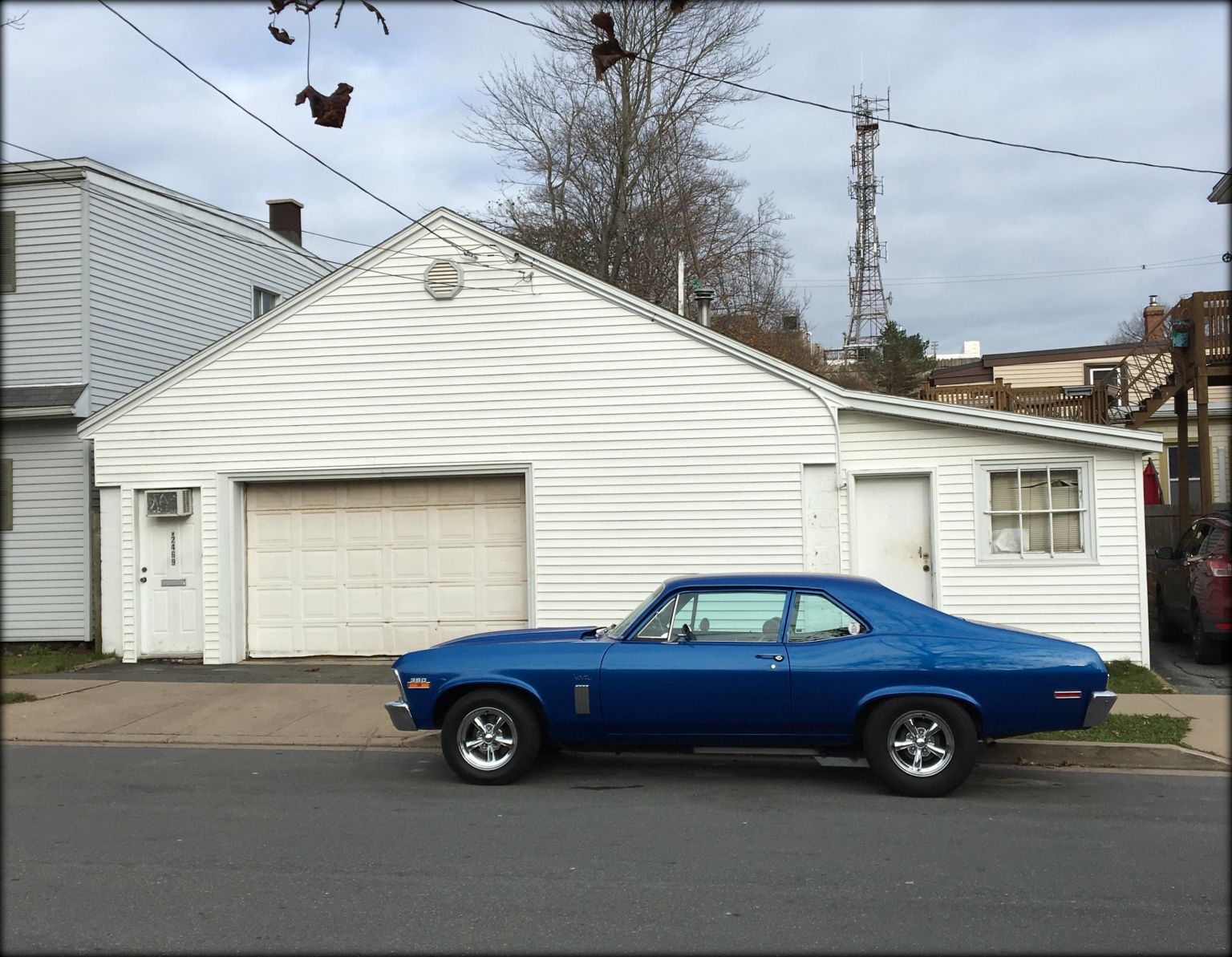 Next door is the most regional of visual delights, the Newfoundland Store. Display windows are always filled with hand stenciled signs neatly hung from strings.  “Pease pudding bags and kits” or “Snowballs, carmal-logs and tea cakes.” So many mysteries, and so many forms of salt cod. 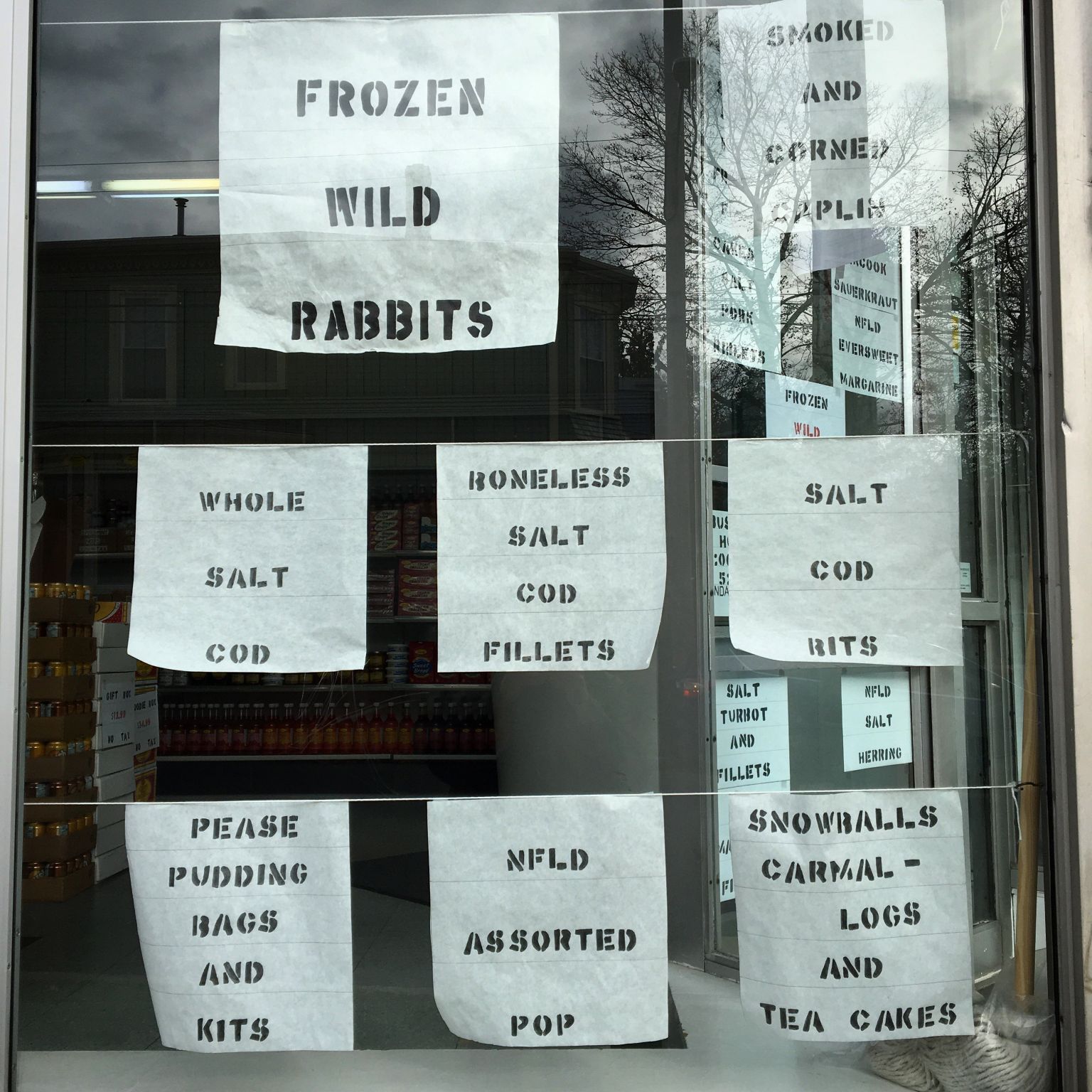 It’s encouraging to come upon modernist houses inserted comfortably into older neighbourhoods. Reviewing my photos, I was surprised that the old-style Newfoundland Store was a good friend, in scale and form, to a young modern house a couple of blocks up the street.

From a distance I spied re-roofing of the old Chebucto Road School (the Conservatory). Because the hundredth anniversary of The Explosion is fast approaching I somehow connect this maintenance with the story of how the basement of the school was used as a temporary morgue after the disaster. 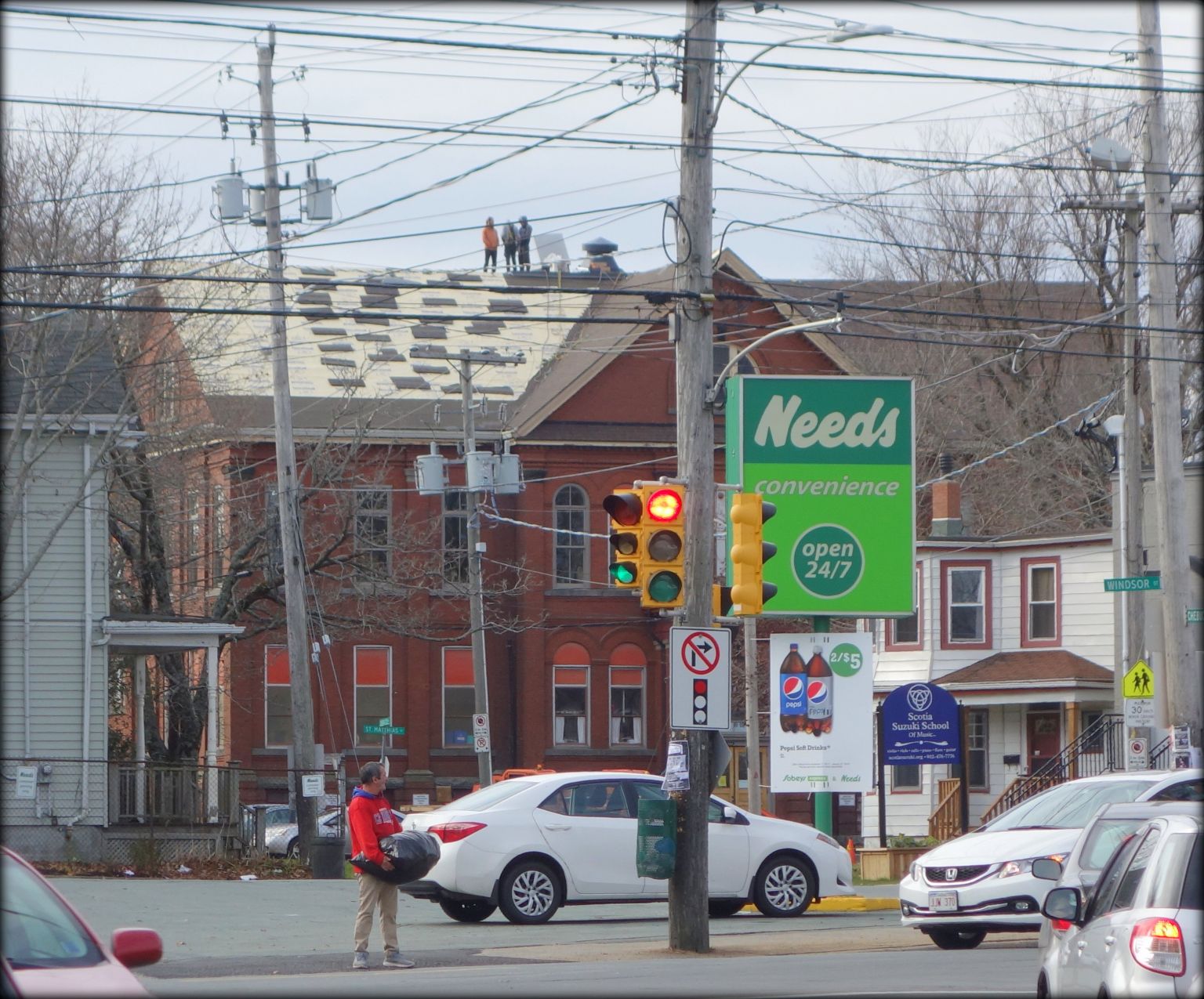 My, there are a lot of overhead wires.

On Windsor Street just south of Chebucto is a small commercial district that ticks along under my radar. The attractive signage on the Asian Grocery was new to me. 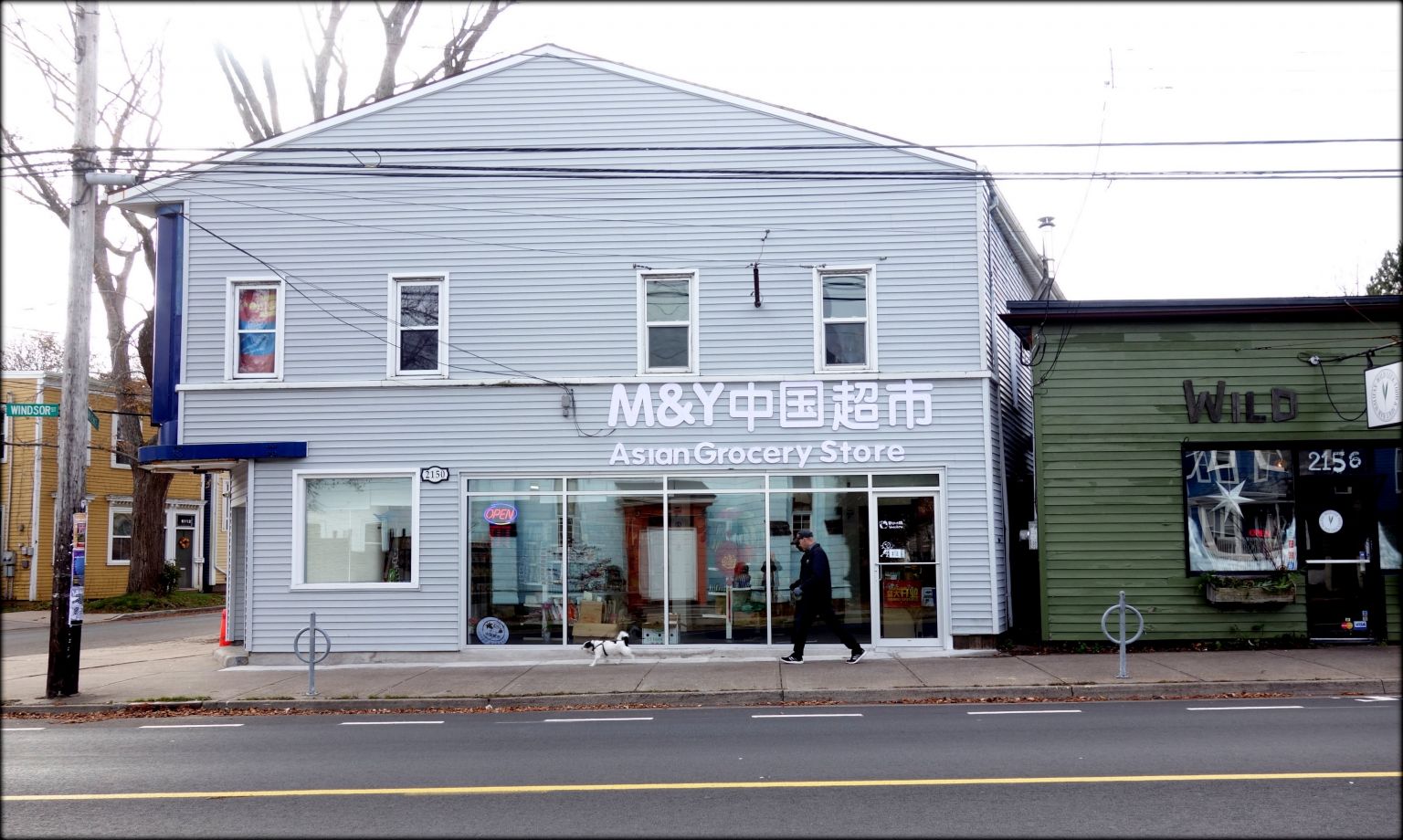 Across the street are stone creatures at the entrance of the Buddhist temple. They have free rolling stone balls in their mouths (thanks Margo, for the hint) and someone has given them piercing white eyes. 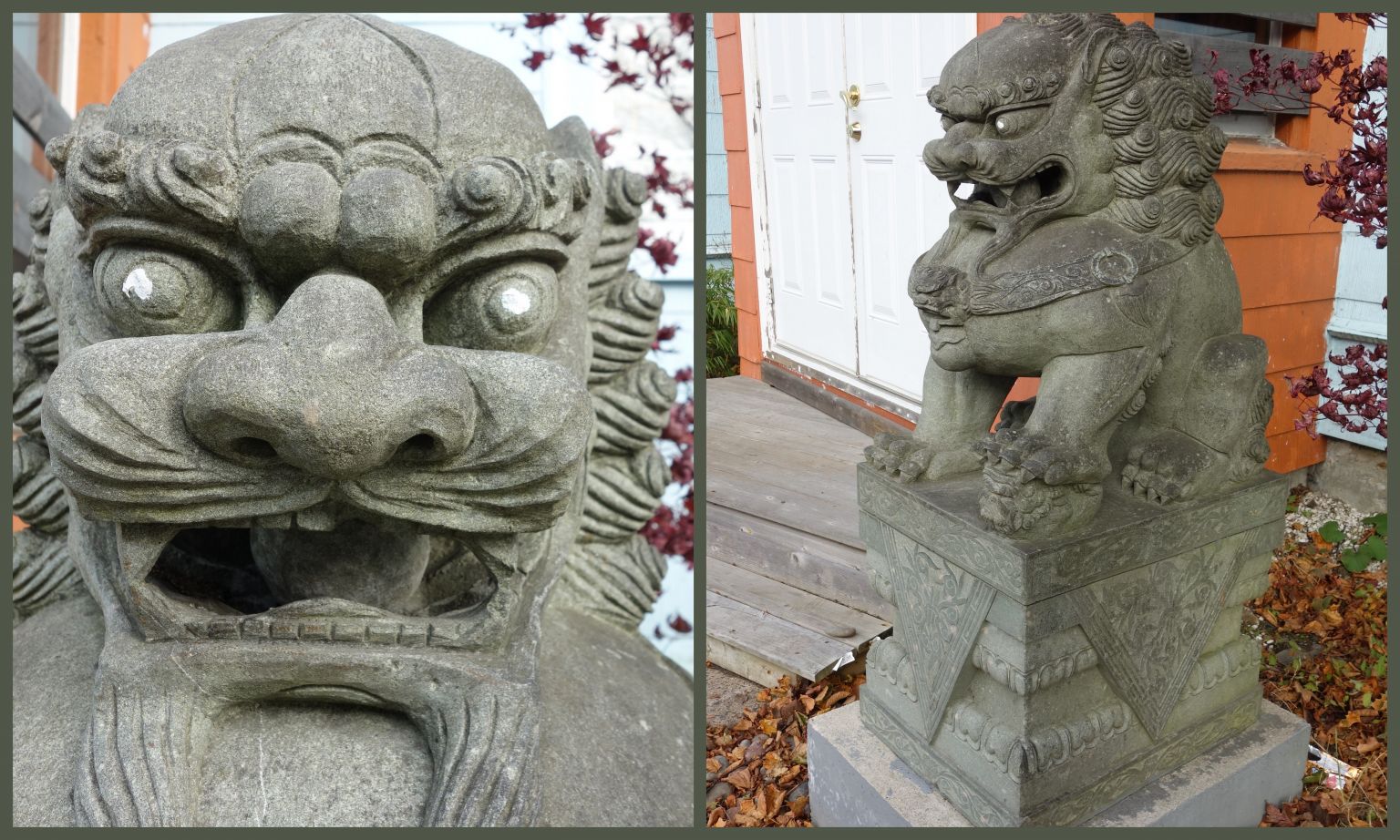 It was my first time on the desire path across the old St Pat’s High School site. Just about as interesting as walking across the Commons (I support Tristan Cleveland’s thoughts on the Commons). Hope people are having some fun using the site before it gets built out.

The new building under construction at the end of the desire path didn’t feel as if it will be friendly to the street. Hope I’m wrong and the curb appeal improves when it is finished. 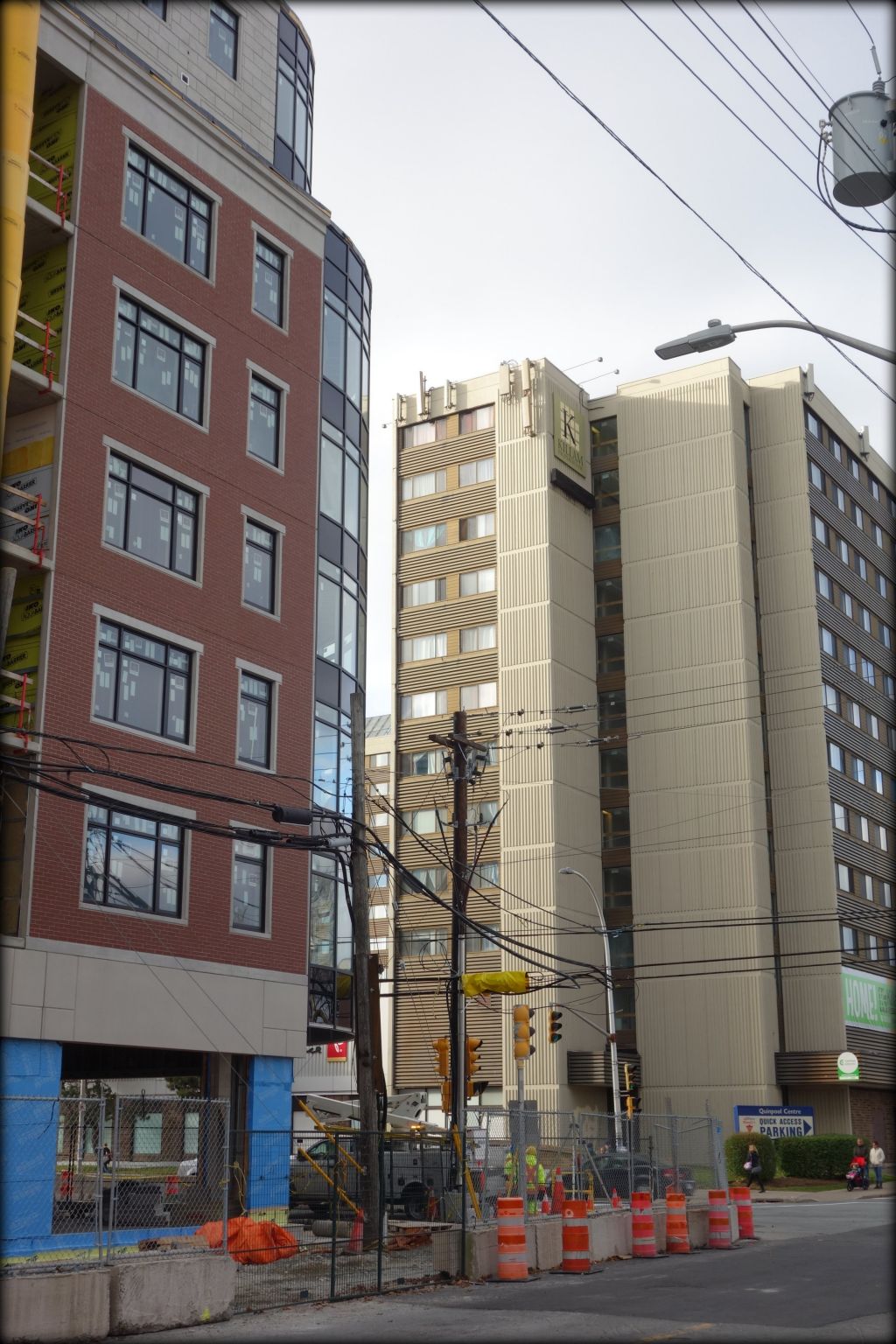 Halifax is handicapped because many citizens live in neighbourhoods that have no generally accepted name (it’s hard to belong if you can’t say where you live). Councillor Waye Mason produced a useful map a few years ago that told me I was now entering Jubilee. News to me, and I grew up here, on the Nut Streets (Walnut & Chestnut).

This is a good district to notice Halifax’s disappearing backyard garages, from the days when folks were first getting cars. Along the east end of Cedar Street are some easily observable and fading examples.

The afternoon light and dark sky made perfect conditions for enjoying the architectural pageant of Edward Street. I’m not always a fan of some of the contemporary paint colours but these felt appropriate and respectful. 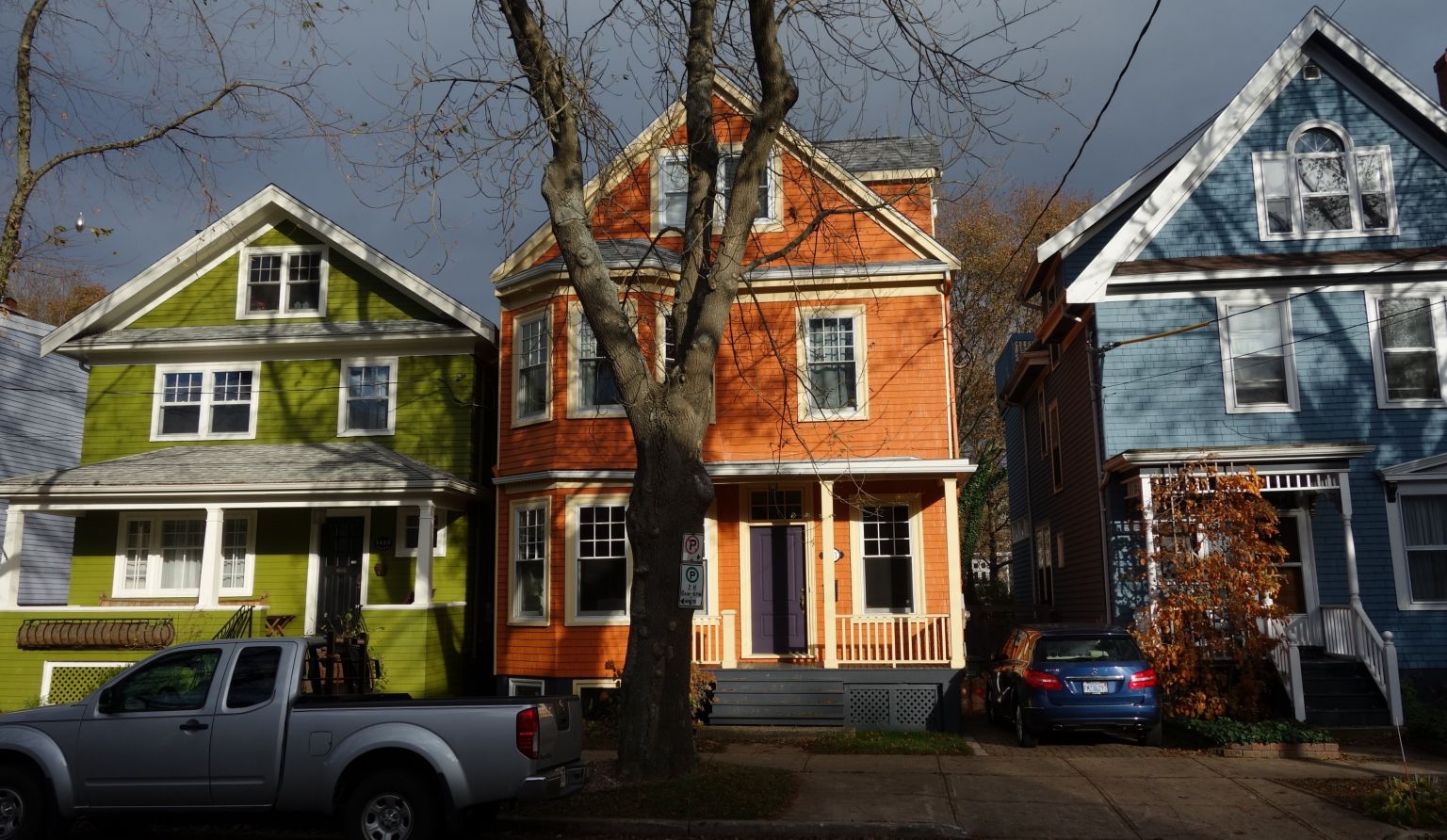 When I reached Dalhousie (the name of the district and the University), the light was perfect on the 1985 wing of the Law School. This was added after lighting struck the original 1966 building and fire badly damaged the library. Would make a nicely scaled apartment building, don’t you think (Legal Lofts)? 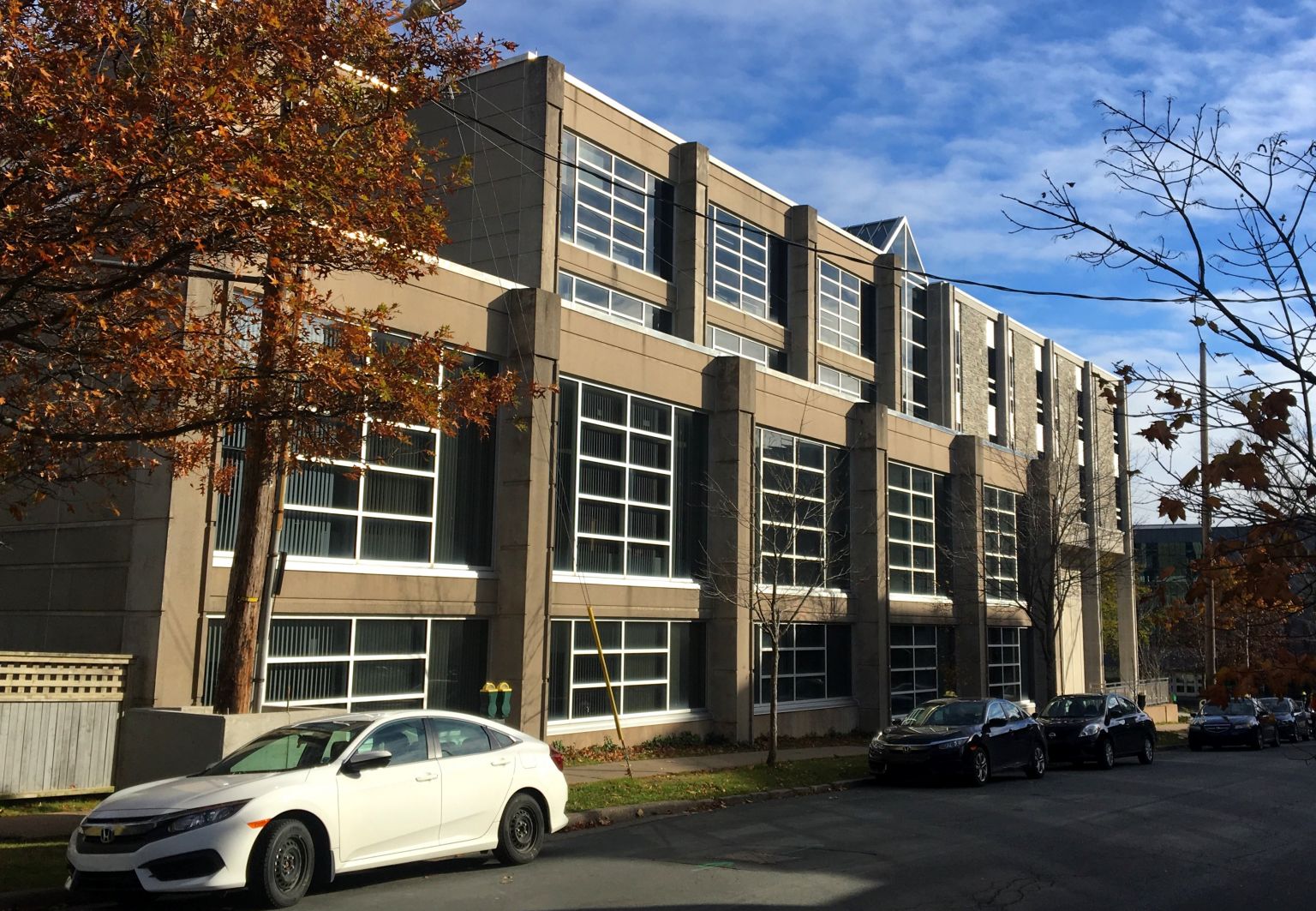 My memory is that the new section was designed in the Arthur Erickson office, like the Admiralty Place Condos in downtown Dartmouth.

Out on University Avenue, the 1960s steel sculpture by Gord Smith has been “conserved.” I’ve always liked it but the new surface treatment feels a bit off. 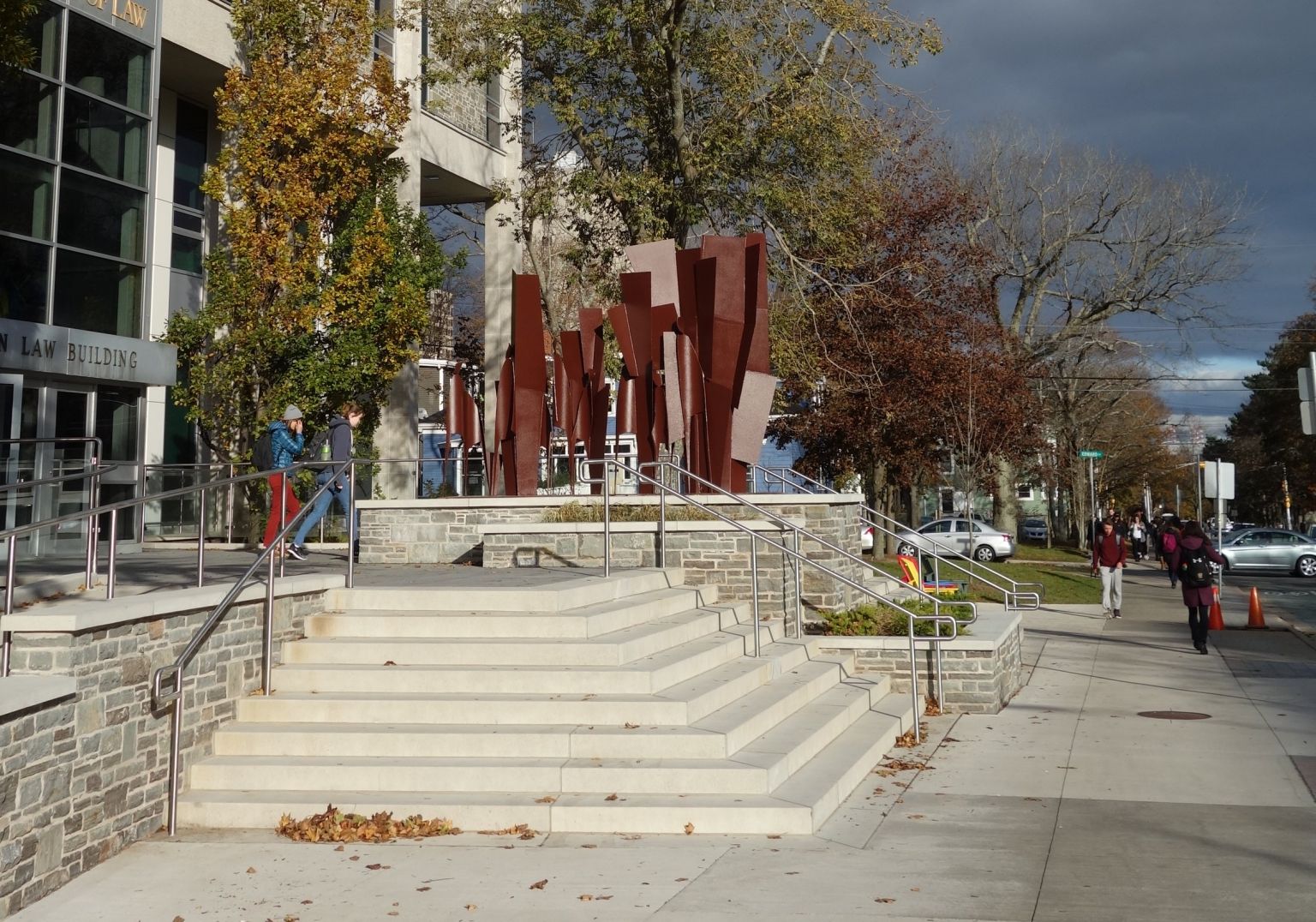 And then I walked back across town to pick up the car, getting winter tires and new fluids. Back on Robie, I pondered why people who needed credit or payday loans could only get the large print versions of the advertisements.