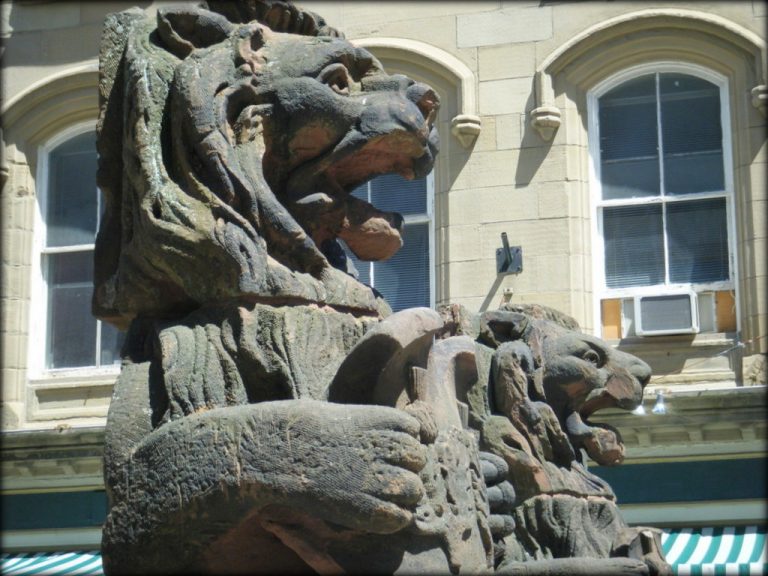 Let me introduce you to a grand Halifax building that you never met. It came to mind when I saw this recent tweet from New Brunswick architectural historian Johnny Leroux. 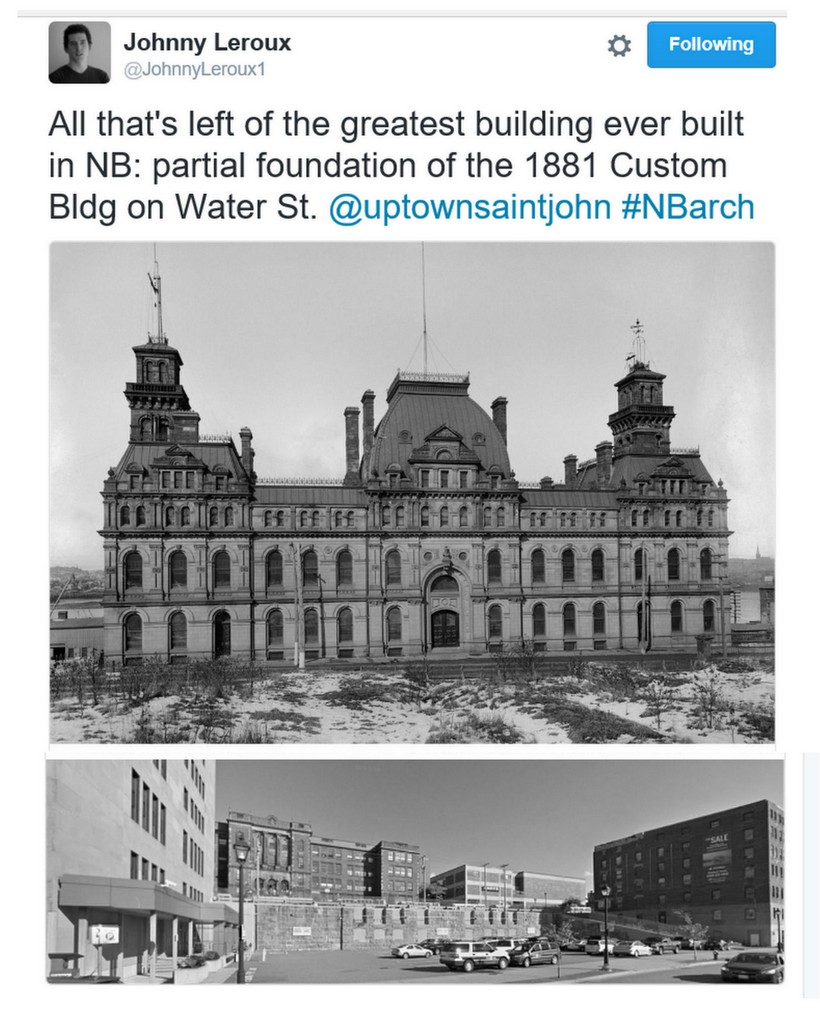 We hate being one upped by Saint John, but don’t worry. Halifax had a great Customs House, on our own Water Street, and we demolished it too! 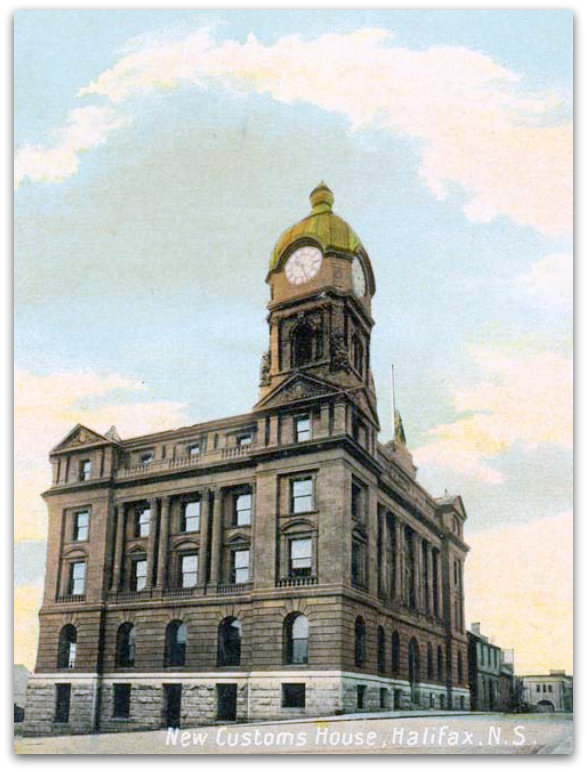 The clock tower of the Customs House was on the corner of George Street (foreground) and Bedford Row. Water Street is to the left.

As you might suspect, the Customs House housed offices of the federal government folks who managed imports and exports. I’m uncertain when it was constructed, about 1890 I’d guess.

This wonderful image shows the 1868 Post Office (built by the anti-confederation colony of Nova Scotia and now the Art Gallery of NS) topped by a 12 foot high statue of Britannia and her lion. At the end of Cheapside is the Customs House sporting an equally large coat of arms of Canada. This stuff doesn’t just happen. 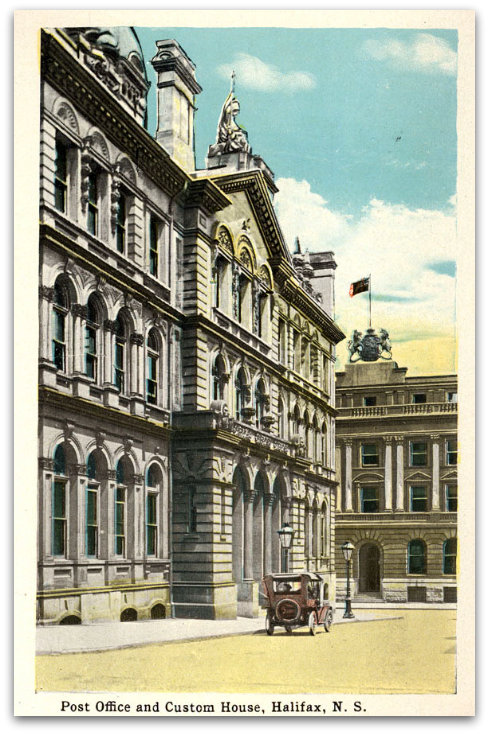 Some extraordinary photos of the Customs House clock tower were taken during World War II by H.B.Jefferson, the official censor. His job was to ensure no details useful to the enemy were printed or broadcast in the media. From his office high in the tower of the Dominion Building he had a panoramic view of the harbour, and for his own amusement he took 100s of photos that record wartime harbour traffic (see them all on the NS Archives site).

Of most interest to me are the foregrounds of his photos that show the tightly packed, working waterfront. In this view, lines of laundry (from a caretaker?) are strung from the Customs House clock tower.  A breathtaking image. 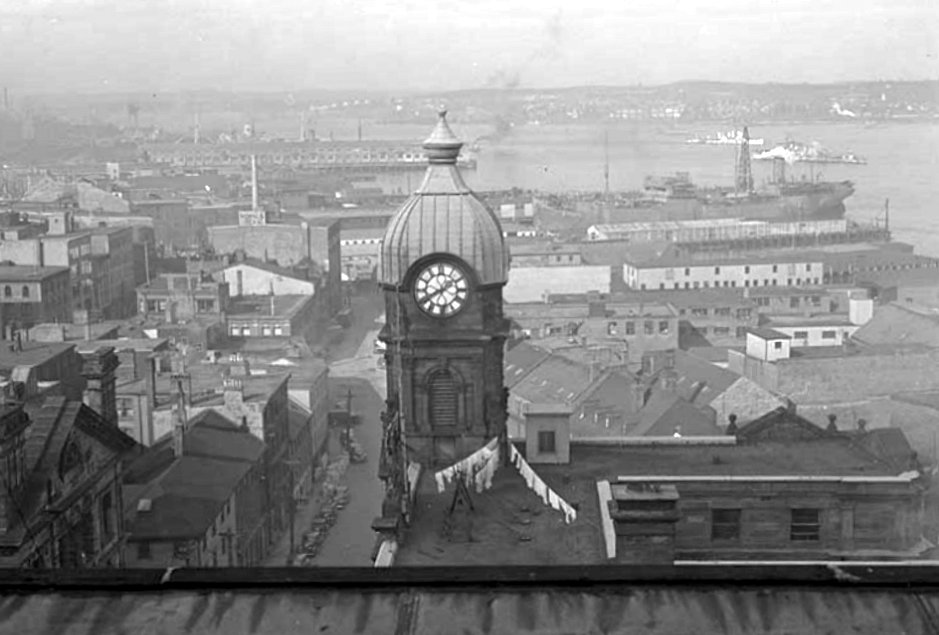 Although I have no memory of the building, I do have a vague recollection there was dismay when it was demolished, around 1960 I think. The College of Art and Design rescued some sandstone lions that were at the base of the clock tower. Each lion is made up of three big blocks of stone. For years the disassembled lions lined the Art College’s campus at the corner of Coburg and LeMarchant Streets.

Now you can see two of the lions reassembled and guarding the entrance to the NSCAD campus on the Granville Mall. 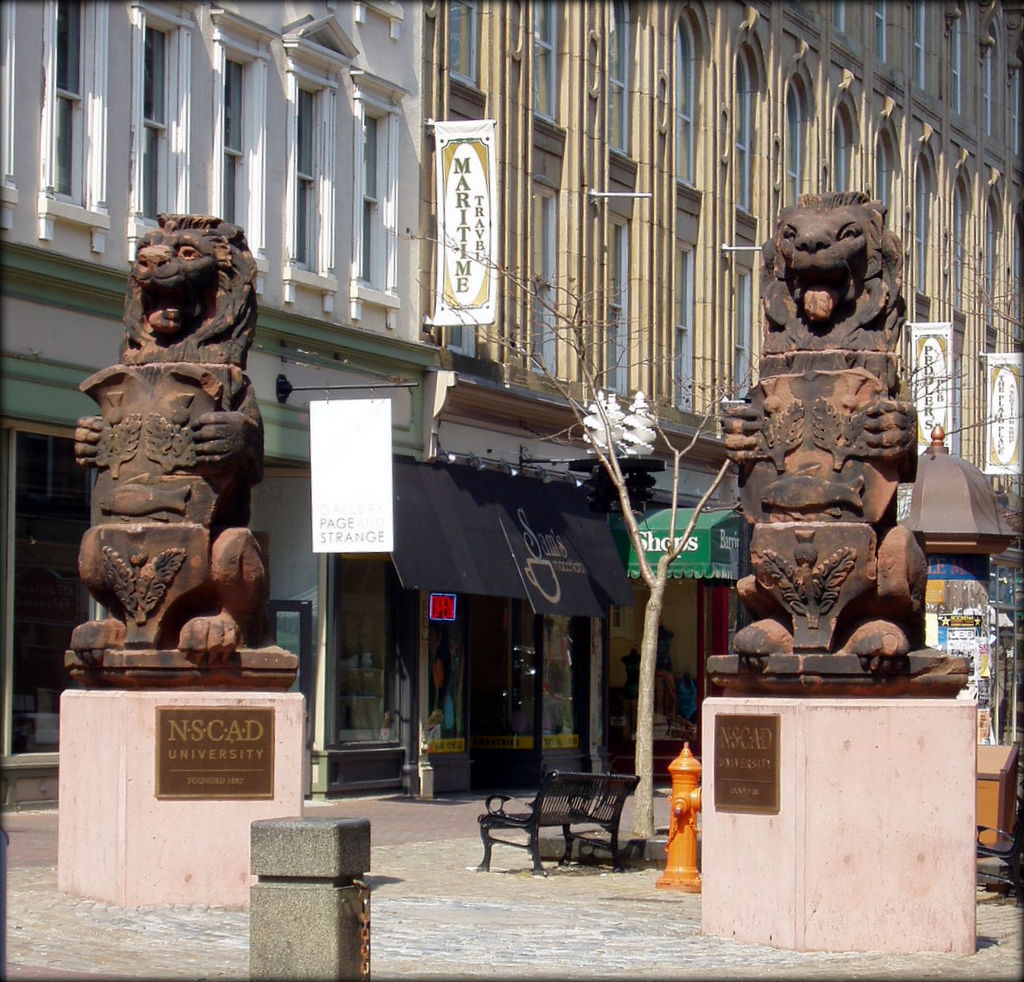 In this fabulous photo, taken from the roof of the Provincial Building I assume, the snow capped lions stand at the base of the tower. And how about that coat of arms? 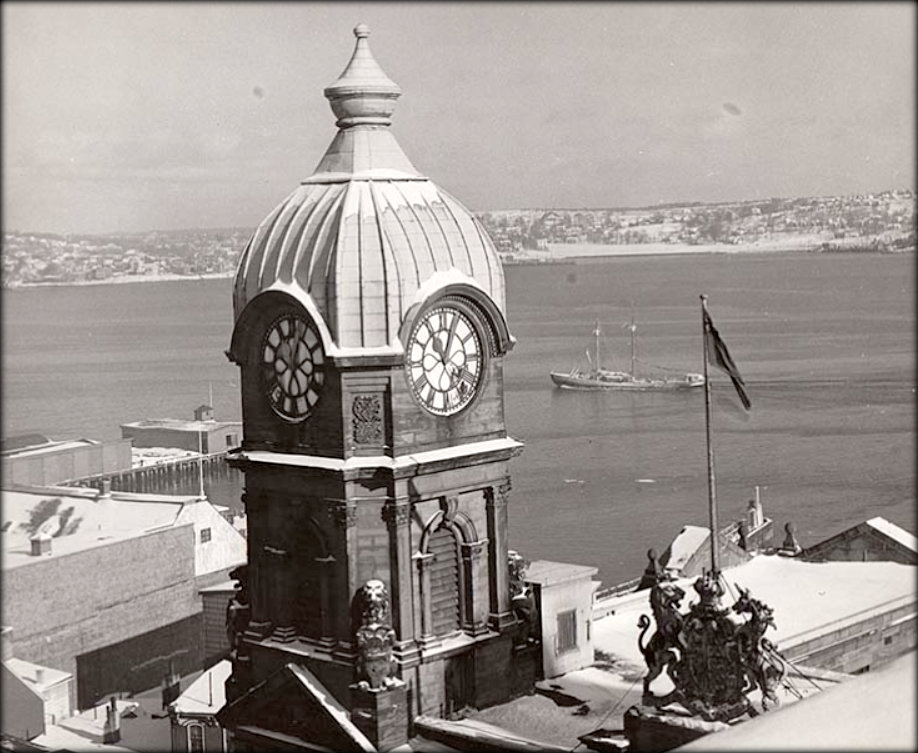 Quite a building, don’t you think? And just like Saint John, the site of our Customs House is a parking lot, and has been for over 50 years now. 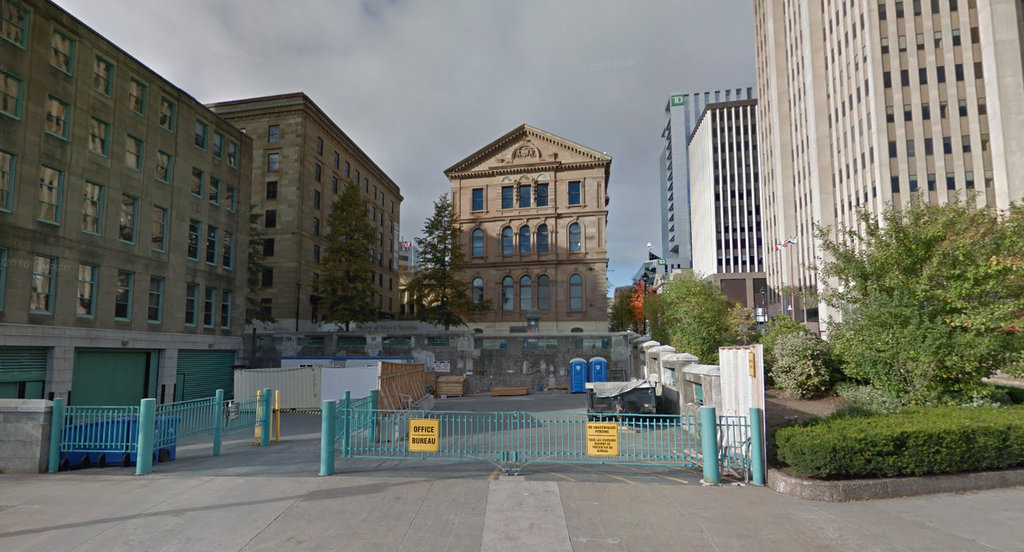 On a Doors Open visit to the Dominion Building I was enchanted to look up undulating Water Street. Compare this to H.P.Jefferson’s point of view from a few floors up in the same building in the 1940s. 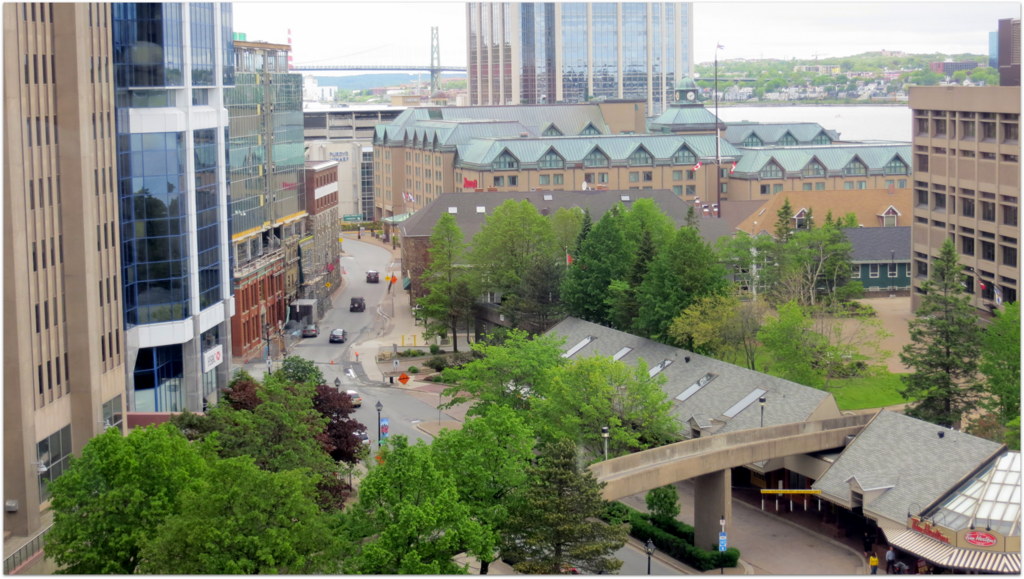 Lost a lot of buildings but gained a few trees. 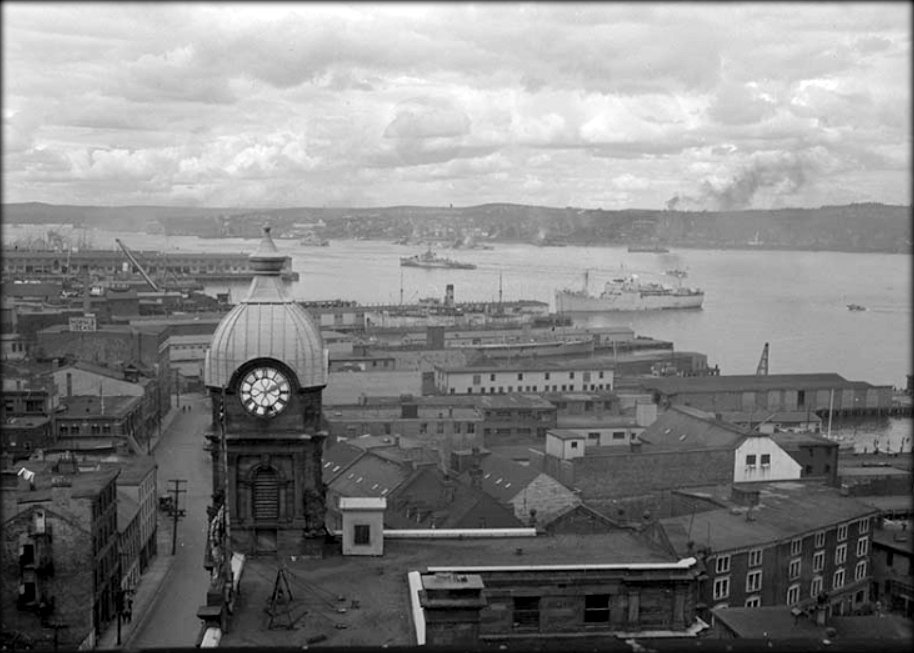