When I grew up in Halifax in the 1950s and 60s we were led to believe that Saint John, New Brunswick was a dark and dreary place that could suck the joy out of you like a Harry Potter dementor. When I finally visited our sister city for a couple of days, in the fall of 1976, I was enchanted to find a wealth of delightful, late 19th century architecture. Authentic treasures for the eye were revealed around every corner. 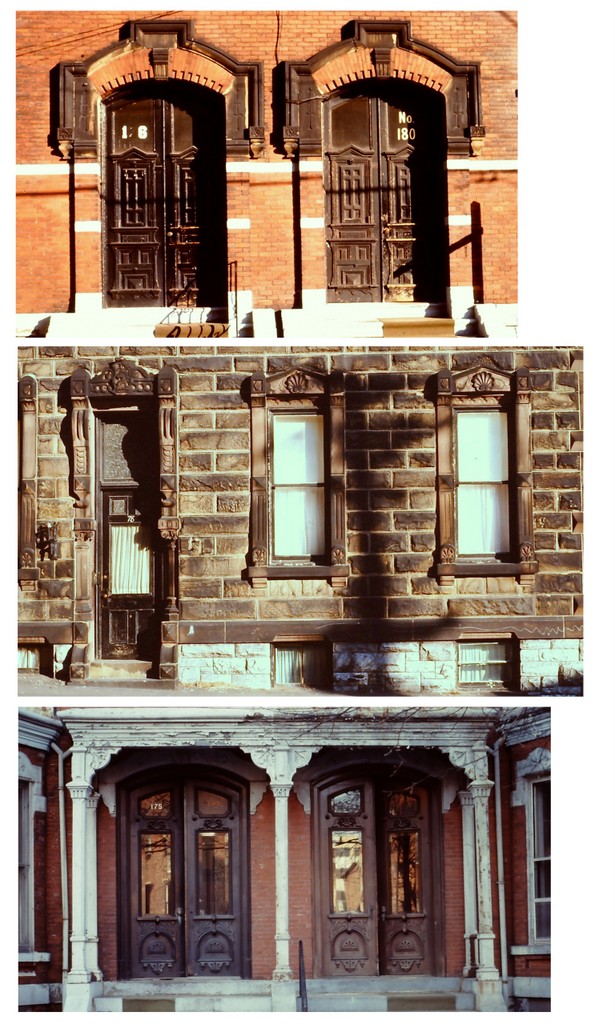 Much of Saint John’s architectural bounty came as a result of a catastrophic 1877 fire that destroyed the business district and vast swaths of residential area. 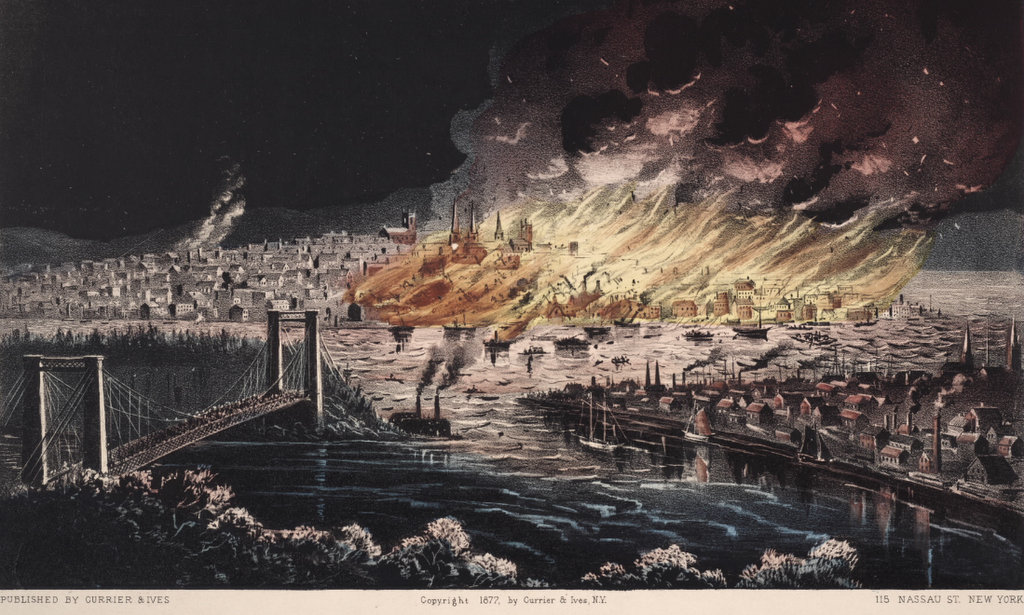 The prosperous city immediately started a total rebuild. Consequently a large section of the city is filled with buildings of the same age, that represent every variation of the highly decorative architectural styles popular in 1870s and 80s. 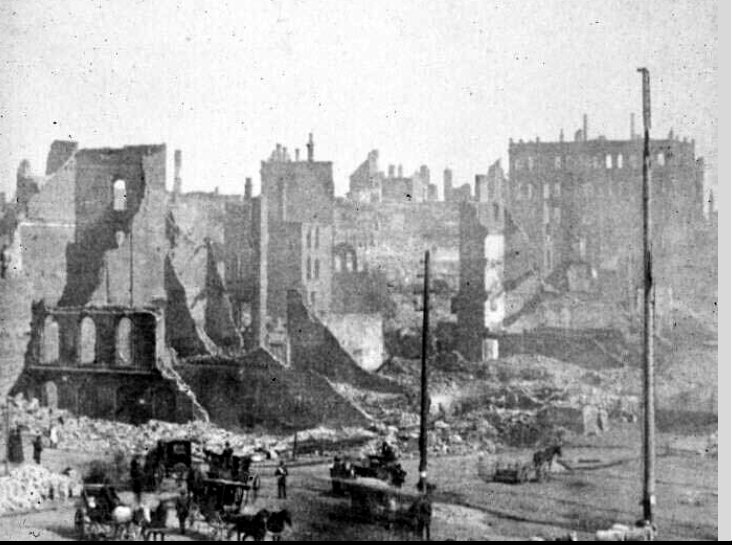 I marvelled at the rich streetscapes but photographed mostly details. Metal cornices and  dormers were not features we had in Halifax but were common in this community that wanted new buildings to be as fireproof as possible. 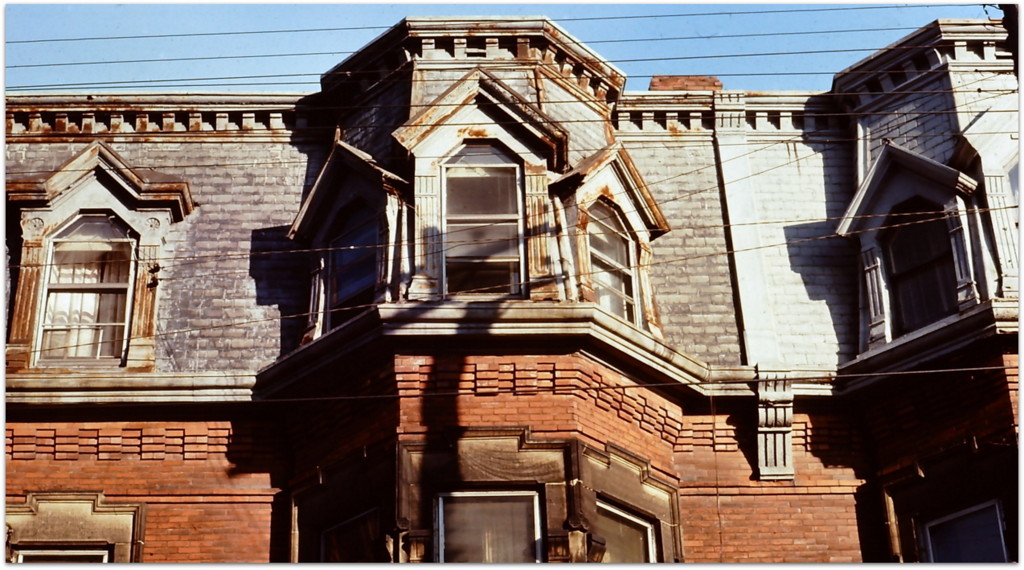 This conservatory on the back of a big brick residence was unlike anything that had survived in Halifax. 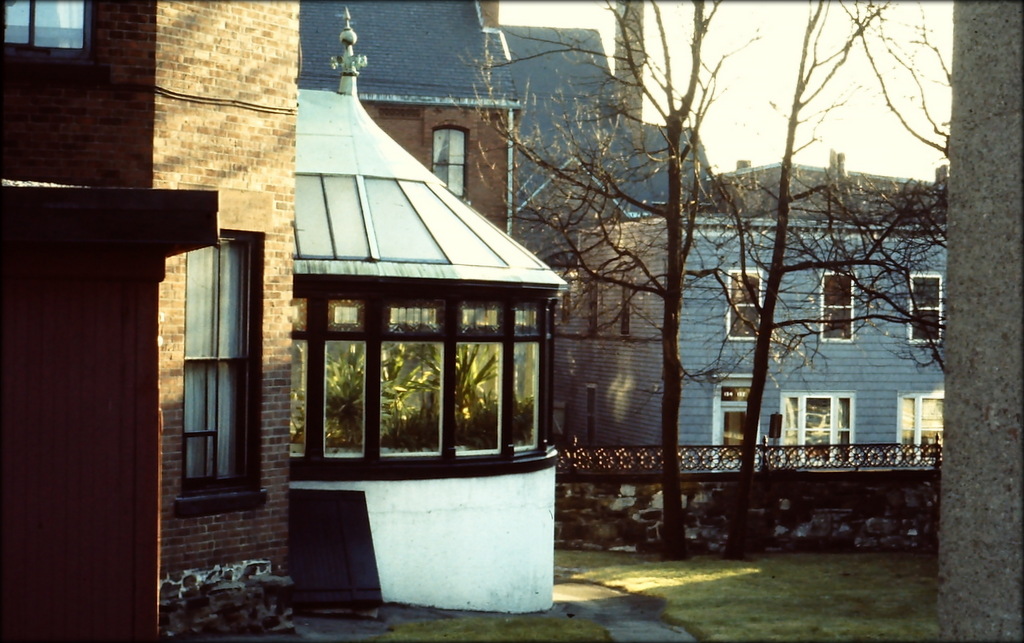 Many of the decorative details (and the building forms) were new to me because architects from New York, Boston and Montreal had supplemented local talent in designing the rebuilds. The horse head on this window surround has a strangely contemporary feel (I want it to be a unicorn). Below the horse is the motto “Per Ardua” – through adversity. 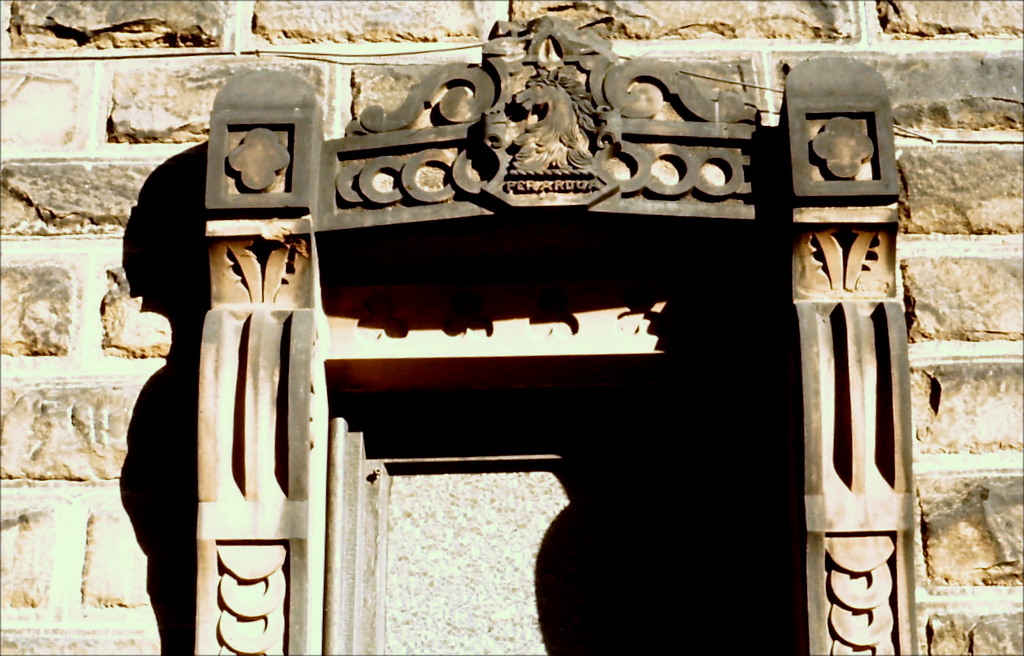 Most of the new buildings were brick (to the great benefit of Nova Scotian brickworks). This gives a visual consistency to the district but there is incredible variation and exuberance in how the bricks are put together. 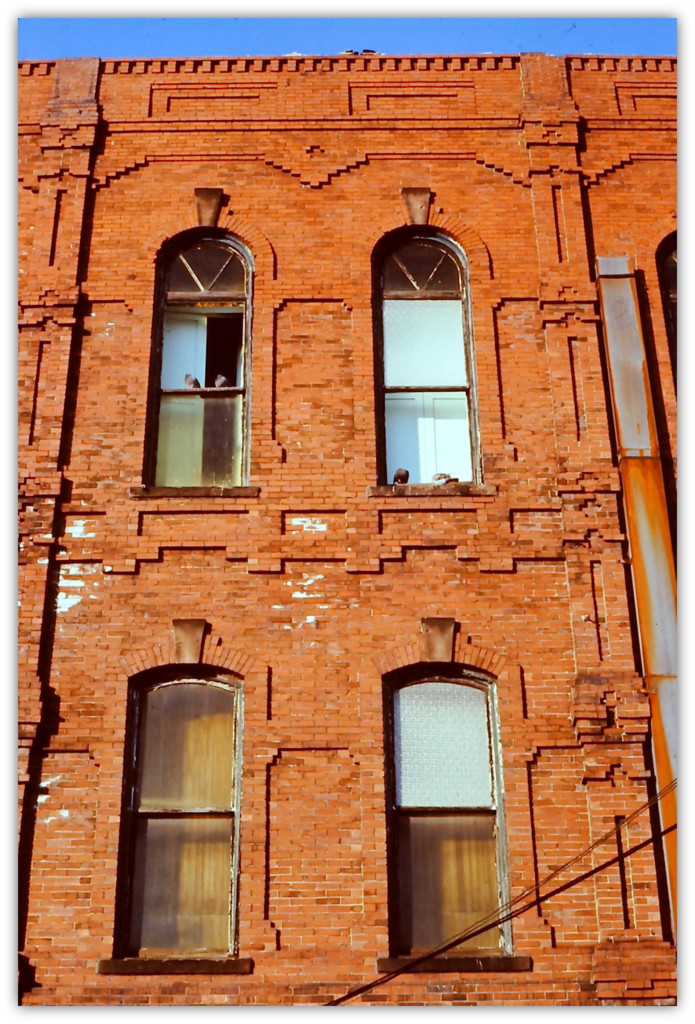 Besides residences there were blocks of commercial and industrial buildings, some of which felt precarious. 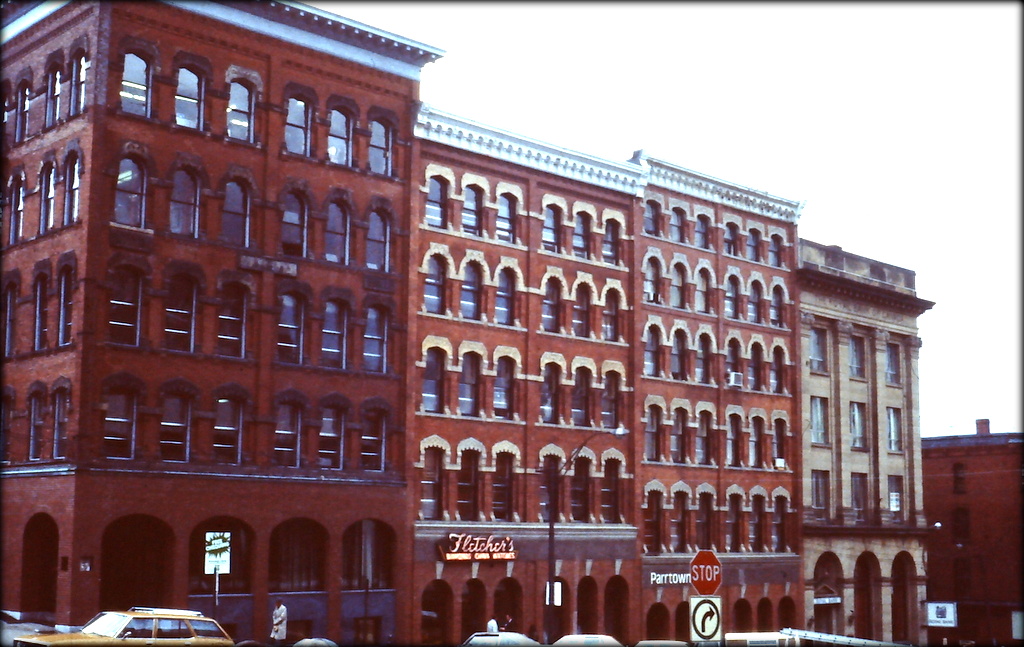 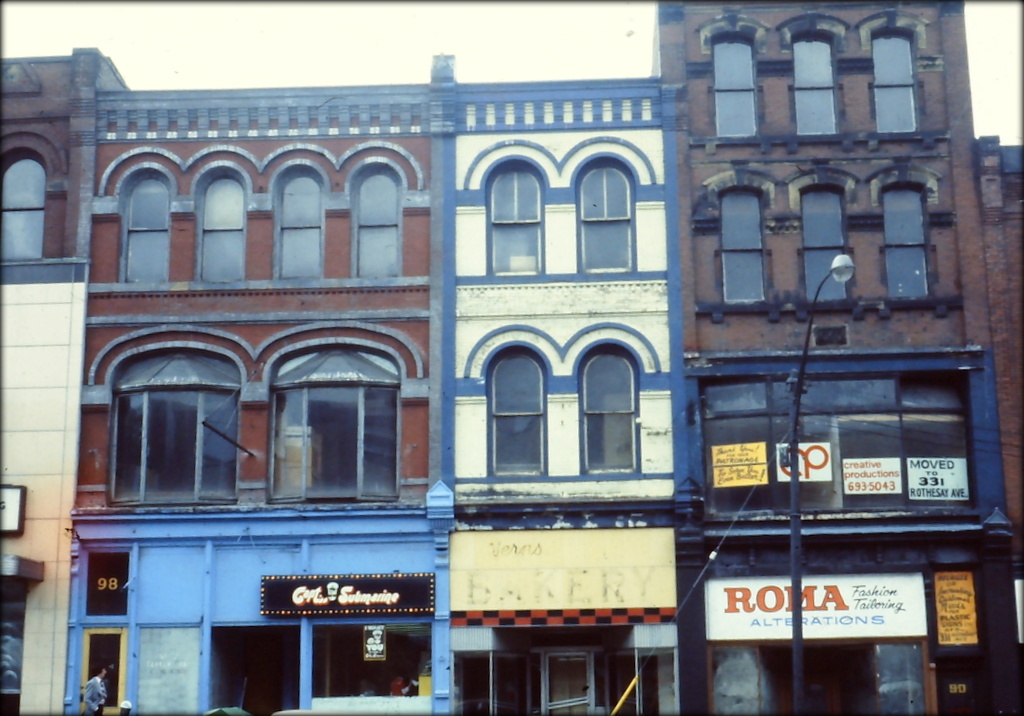 Away from the site of the Great Fire there were earlier buildings like the 1825 St John’s Stone Church, in a power position at the end of an important street. 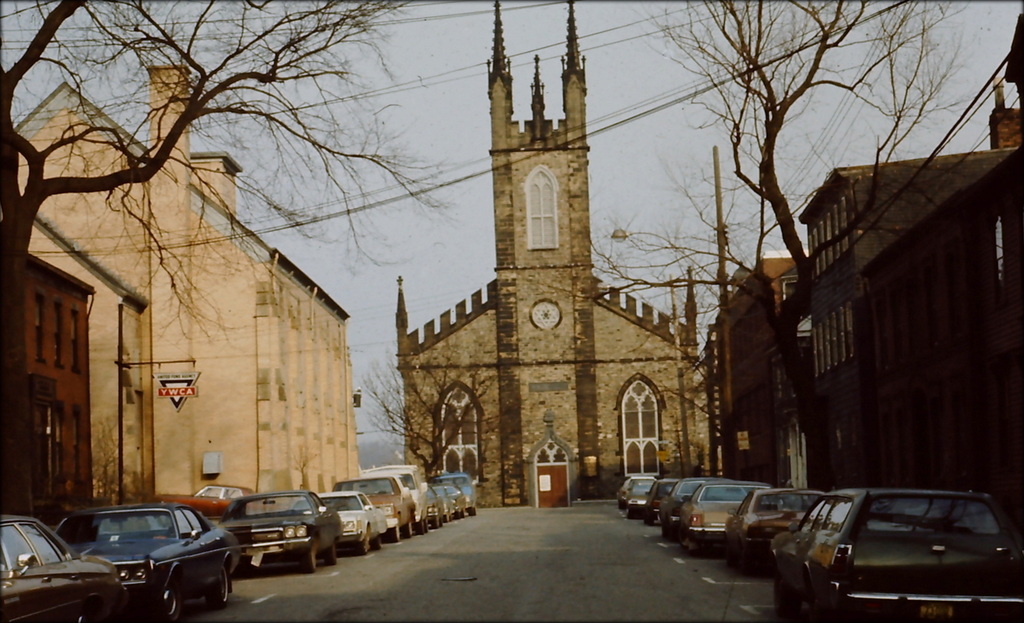 Near by was this wooden residence with carved, decorative details. I think this building may have disappeared. 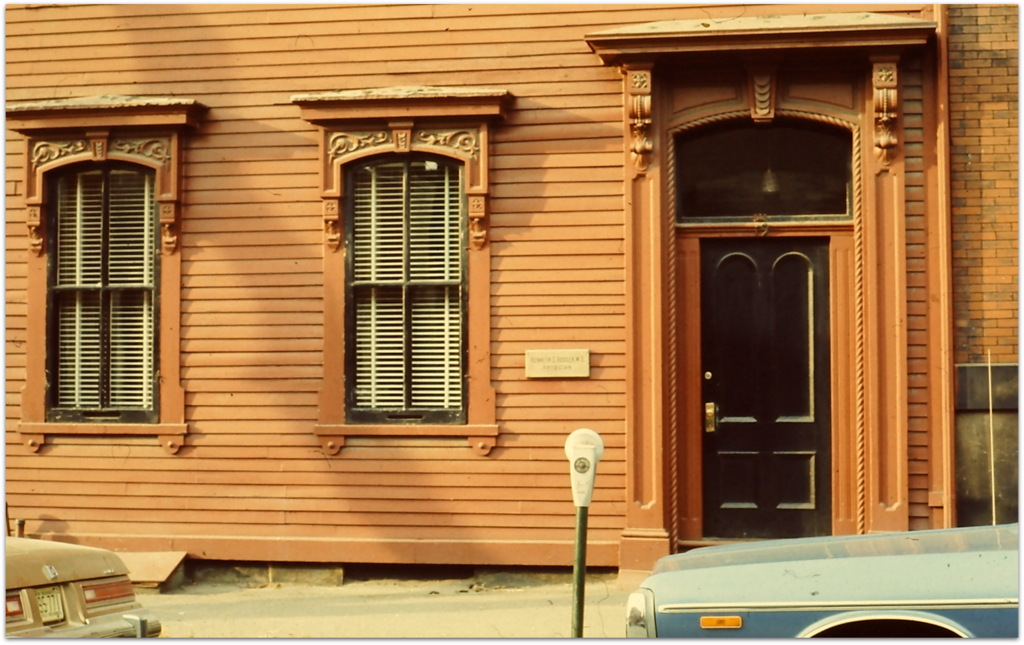 I was particularly delighted with a group of buildings on Main Street in what I think is the Portland district. St Luke’s church is still there and appears to be in better condition today than in my 40 year old photos. 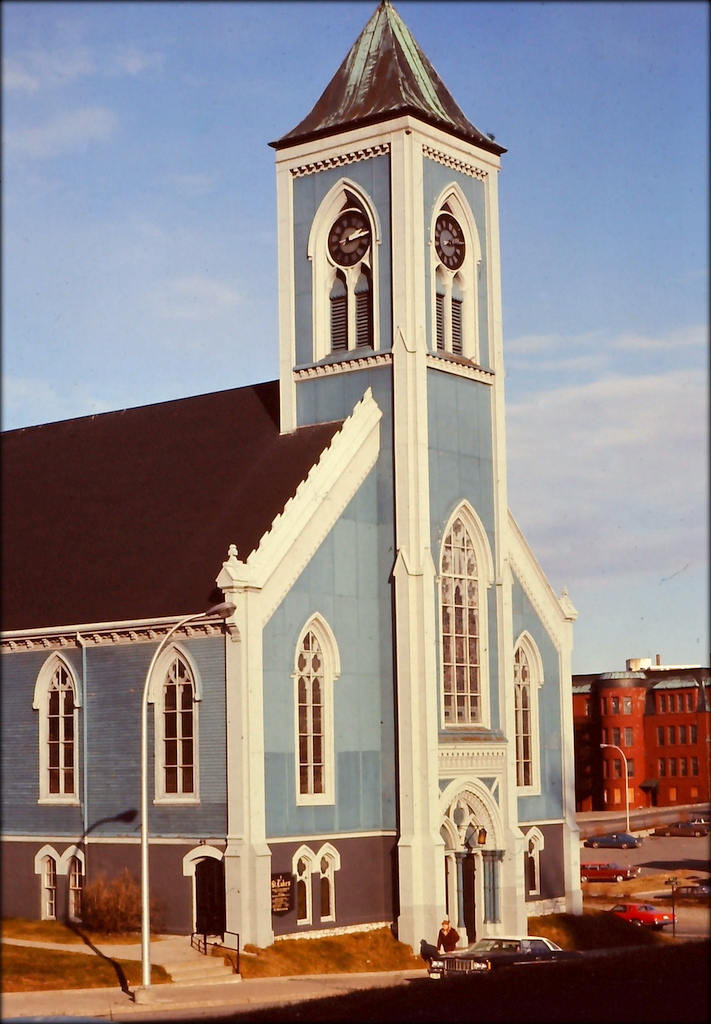 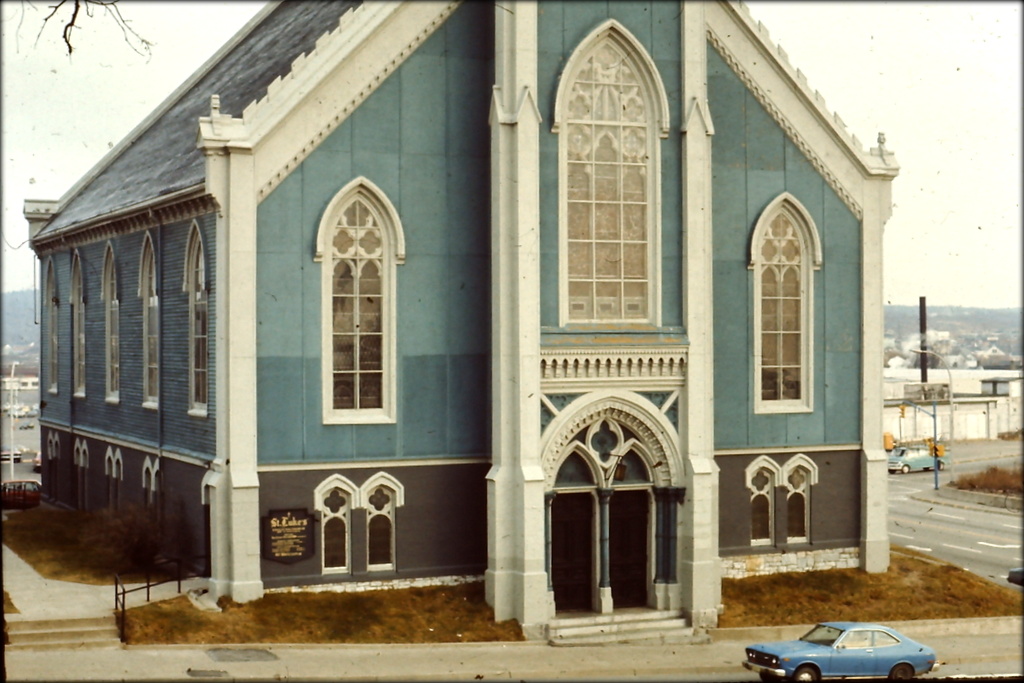 Just up the street was Union Hall, one of the most arresting buildings I discovered. Its metal cornice is the featured image at the top of this post. 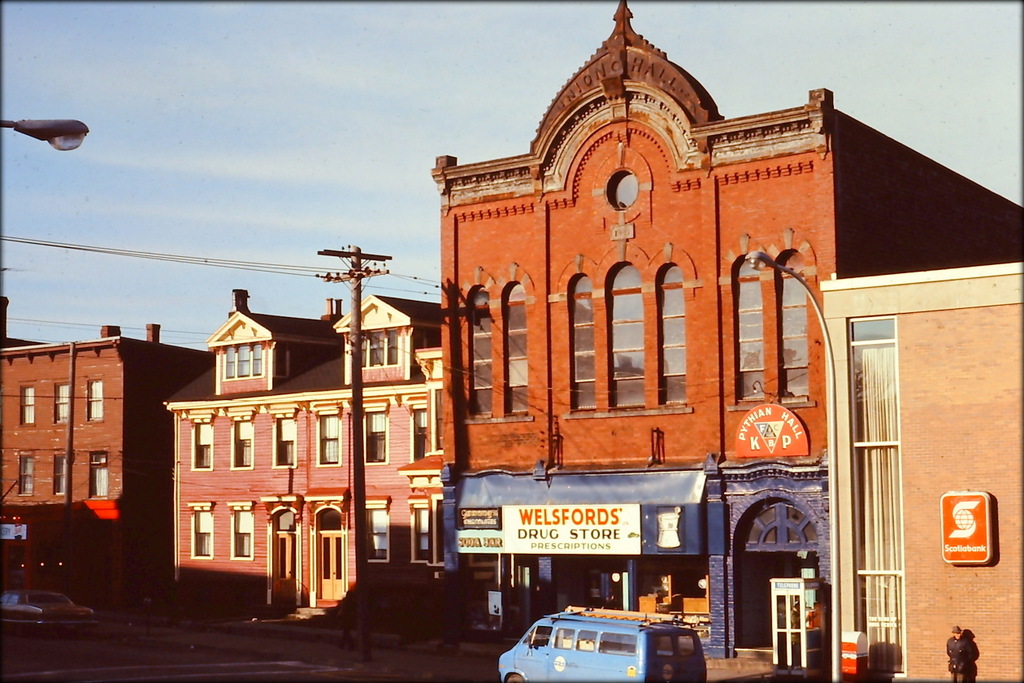 In 1976 the building was used by the Knights of Pythias and Welsfords’ Drug Store, advertising their soda fountain and that New Brunswick delight – Ganong’s chocolates (get me a Pal-o-mine). 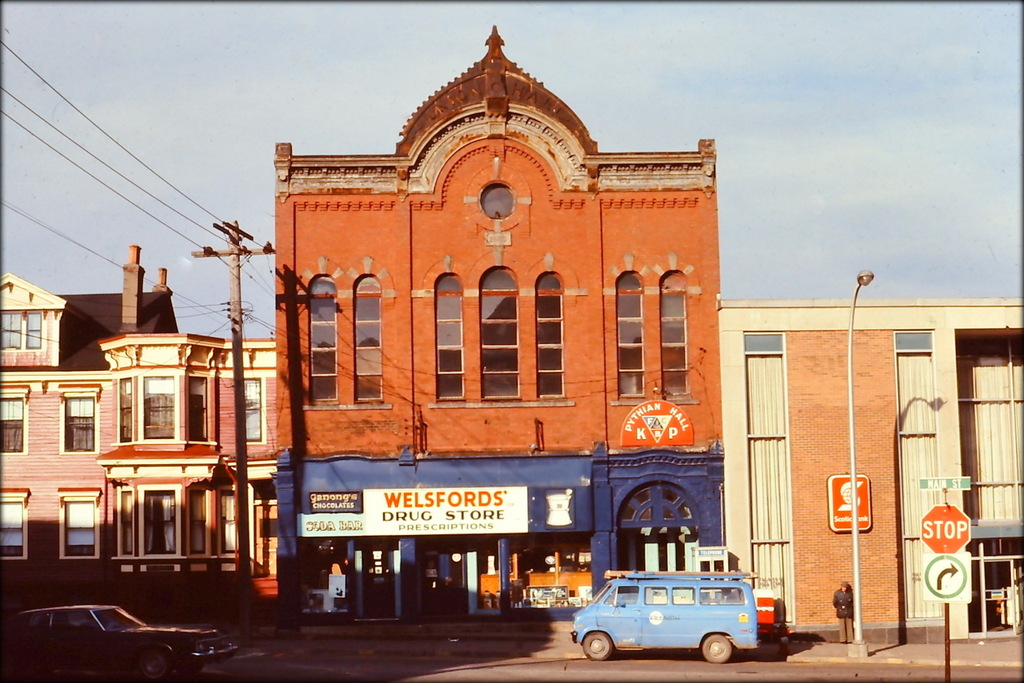 On Street View I was able to identify many of the buildings I saw 40 years ago but sadly this was not one of them. The neighbouring Scotiabank Sad and Lonely Centre has survived.

Across the Reversing Falls Bridge was this huge, over the top house which would merit a spread in a masterpieces of Victorian architecture book. 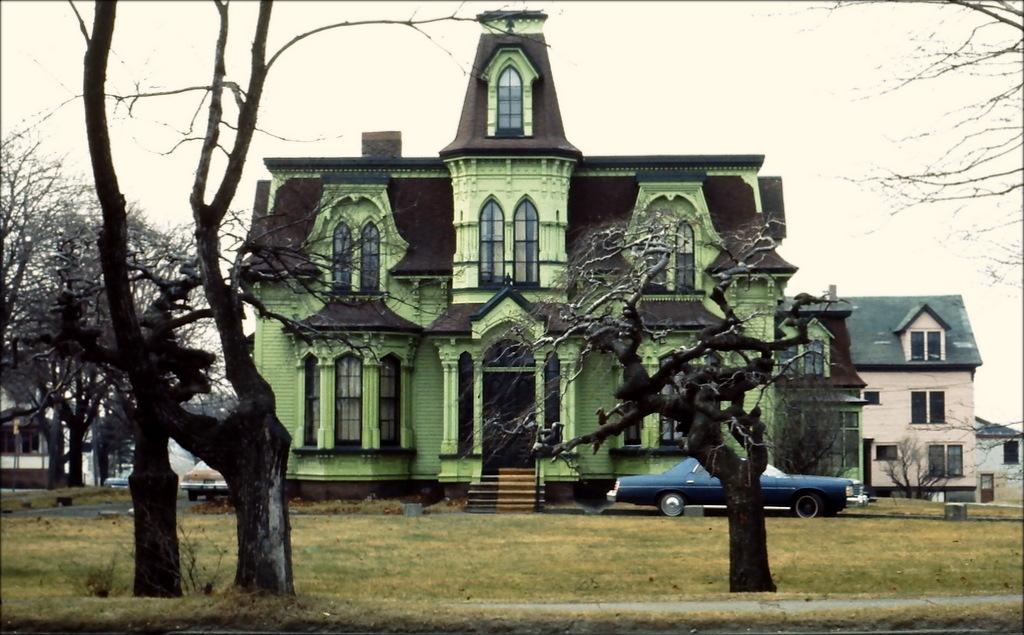 Since my 1976 fling with Saint John we have never really got back together. Sheila and I pass by almost every year but the highway that divided the city in two makes it just too easy to motor on through. A couple of years ago we decided it was time to stop for lunch and easily exited the highway and parked in front of a bustling restaurant on King Street. 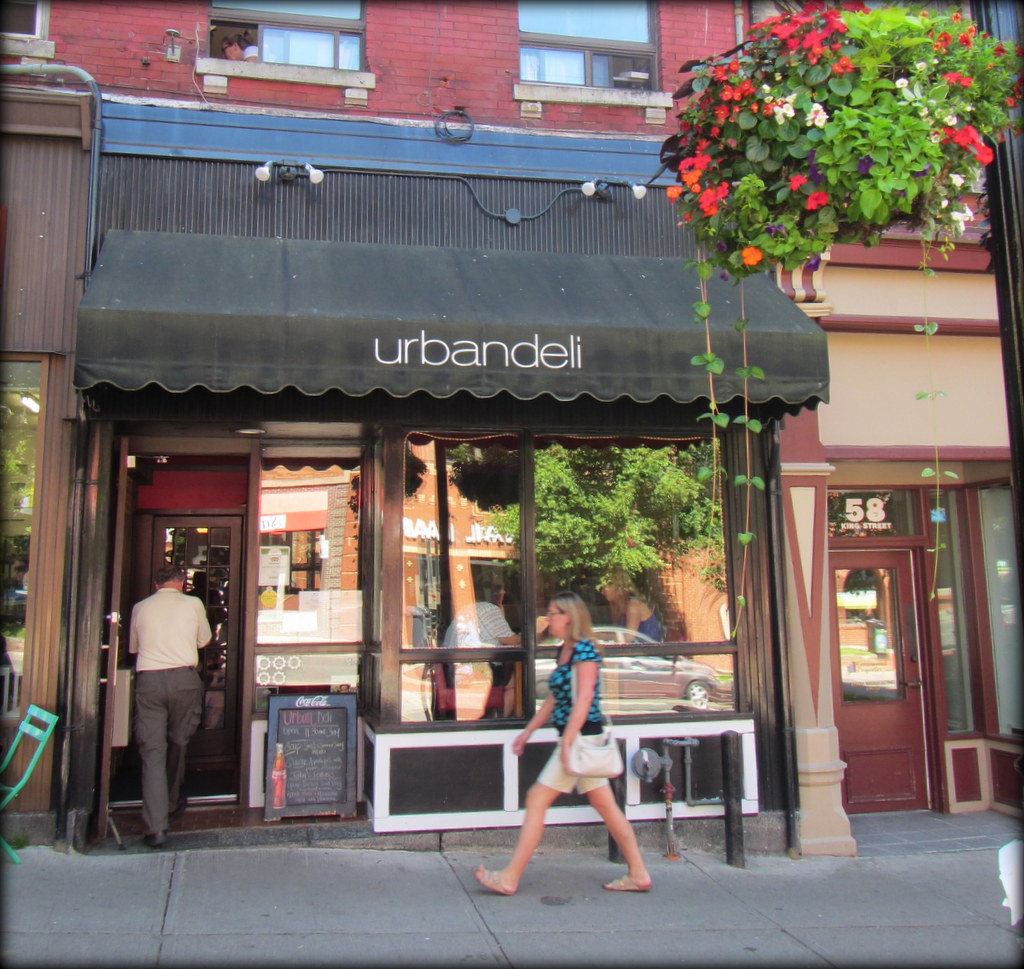 Forty years ago the neighbourhood had not looked so auspicious. 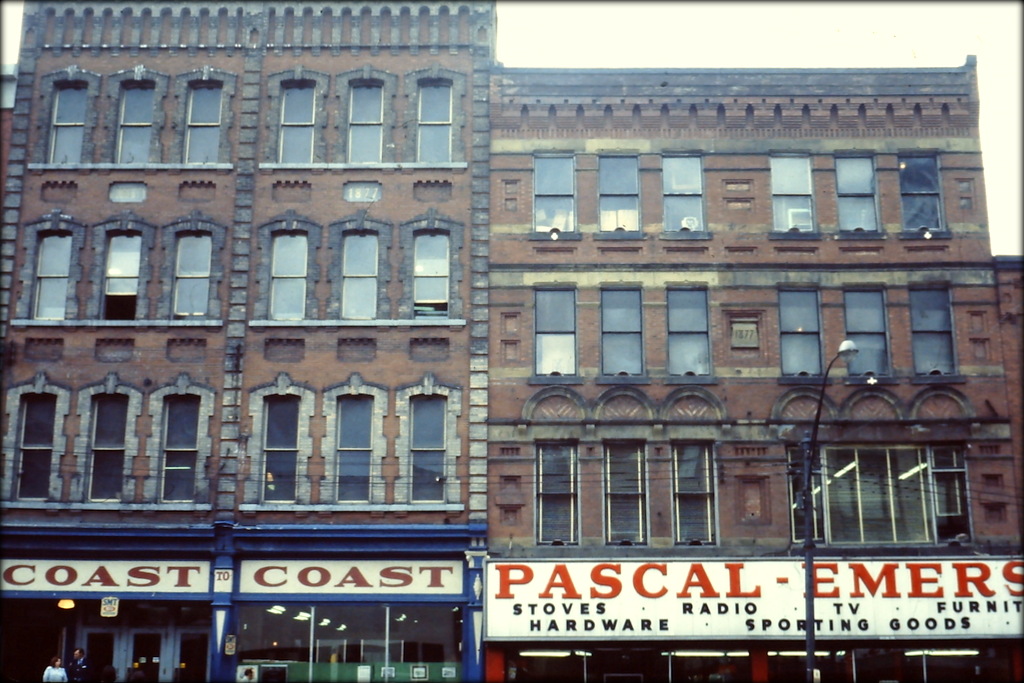 After lunch we walked around the corner to sample the famous, old City Market. Today it feels bright and joyful. 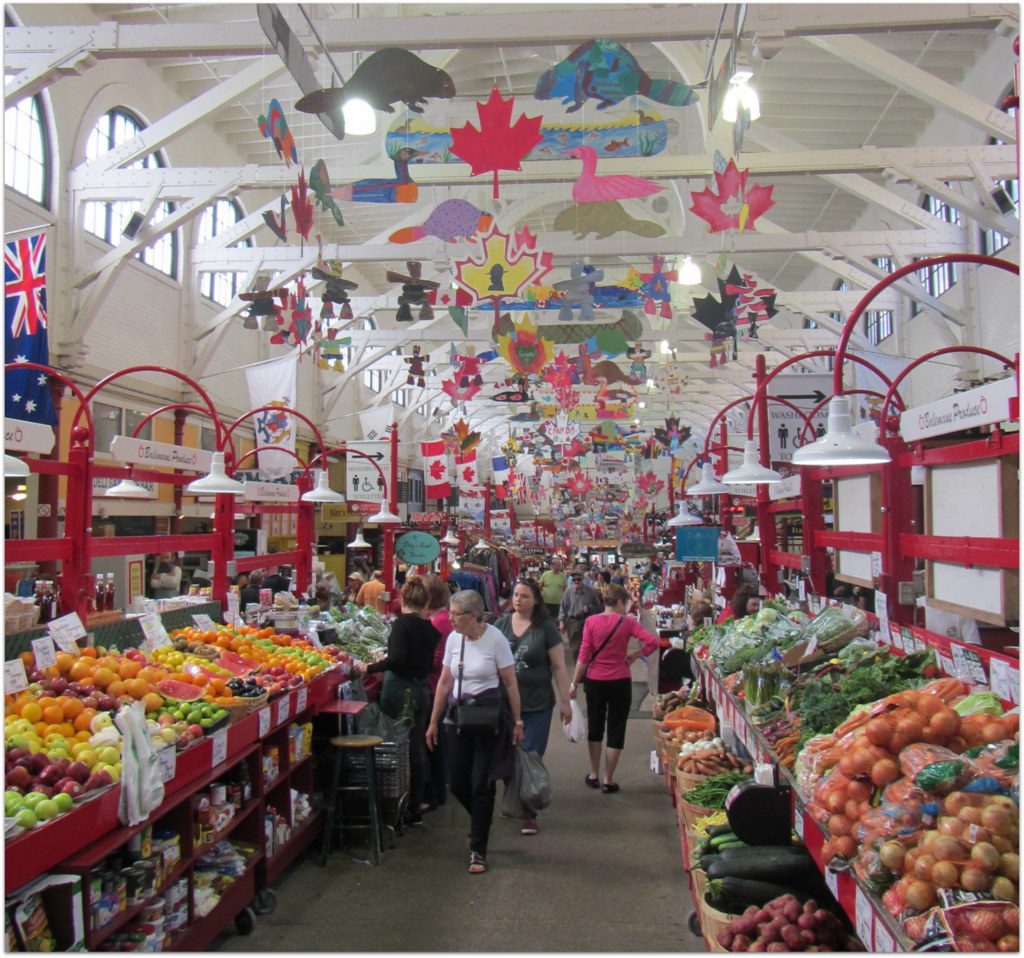 In 1976, when I was particularly interested in the roof trusses, it was more dour. 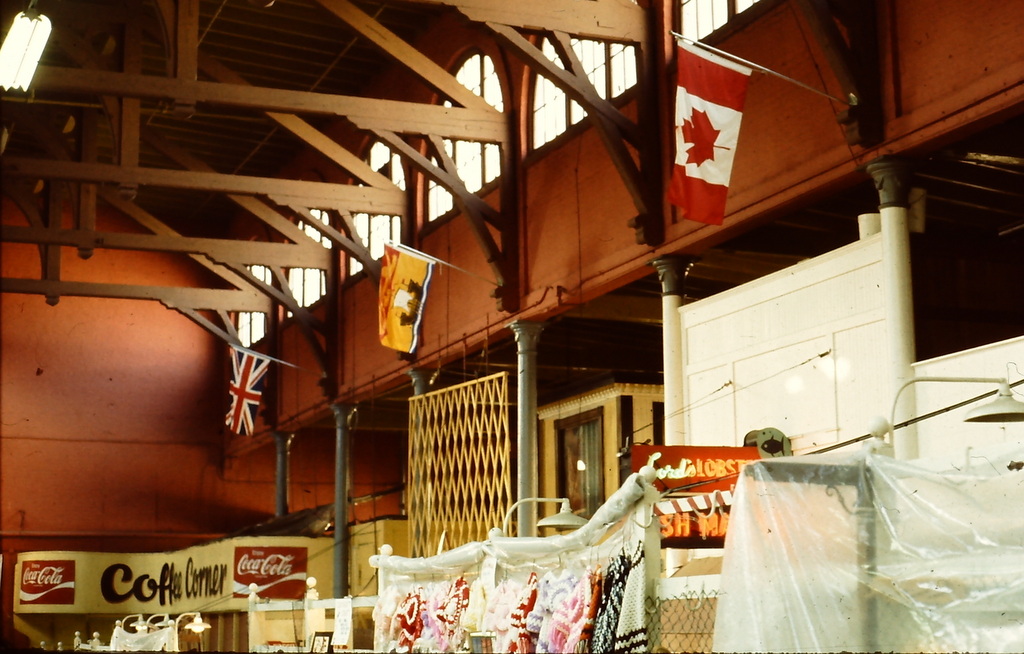 The Market entrance in 1975 and from Street View today also demonstrates that Saint John and our world have changed. 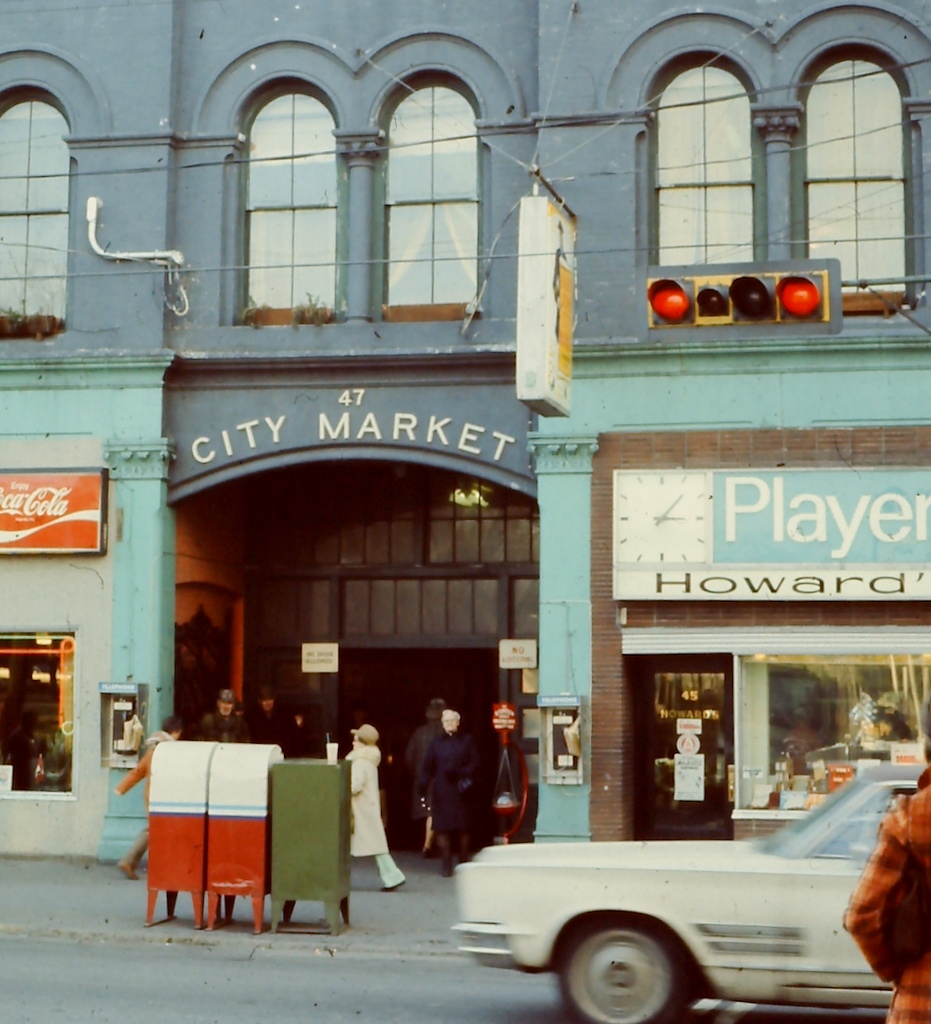 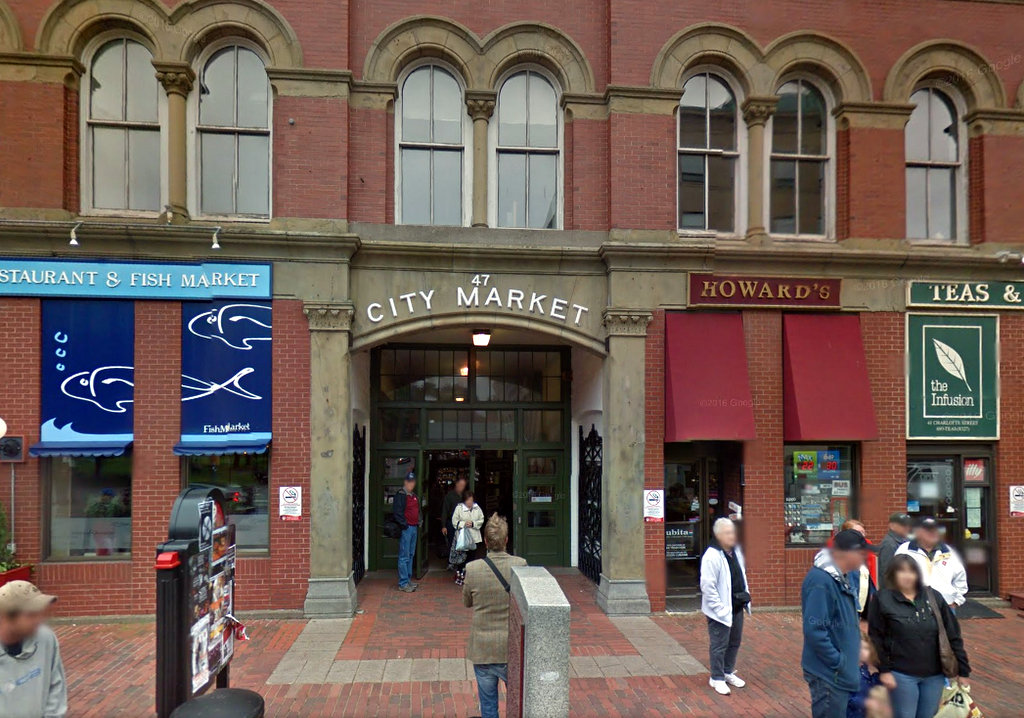 I clearly don’t know very much about Saint John but my understanding is that many of the wonderful post-Great Fire buildings are protected in a conservation district (and have been since the 1980s). It also appears that this architectural heritage is recognized by the city as a valuable asset that makes Saint John an interesting place to live and to do business. Hope that continues to work out. 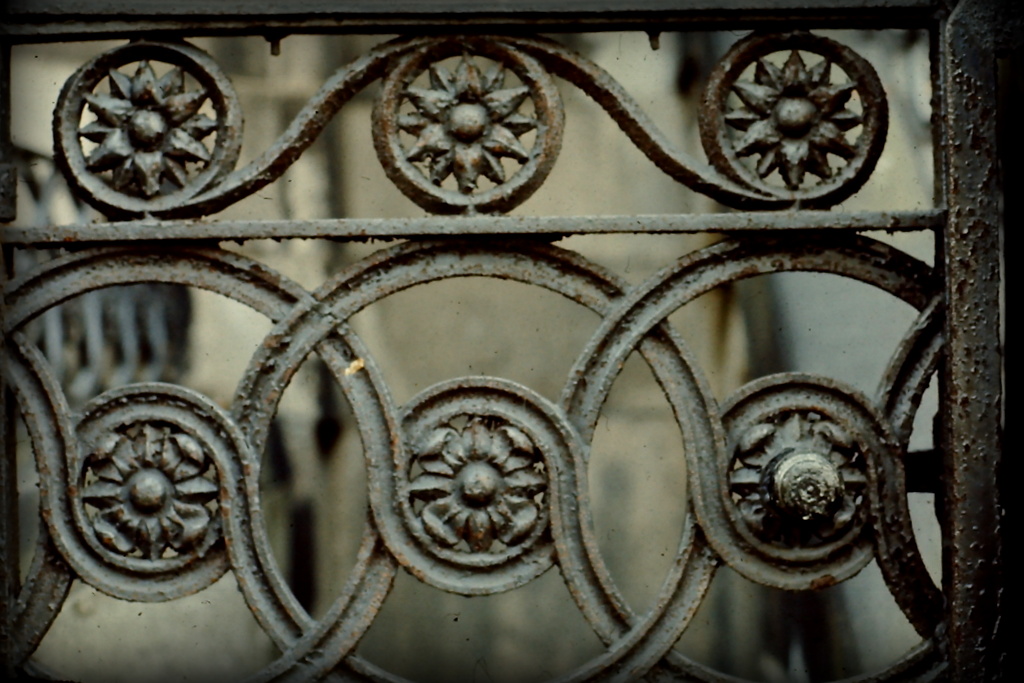 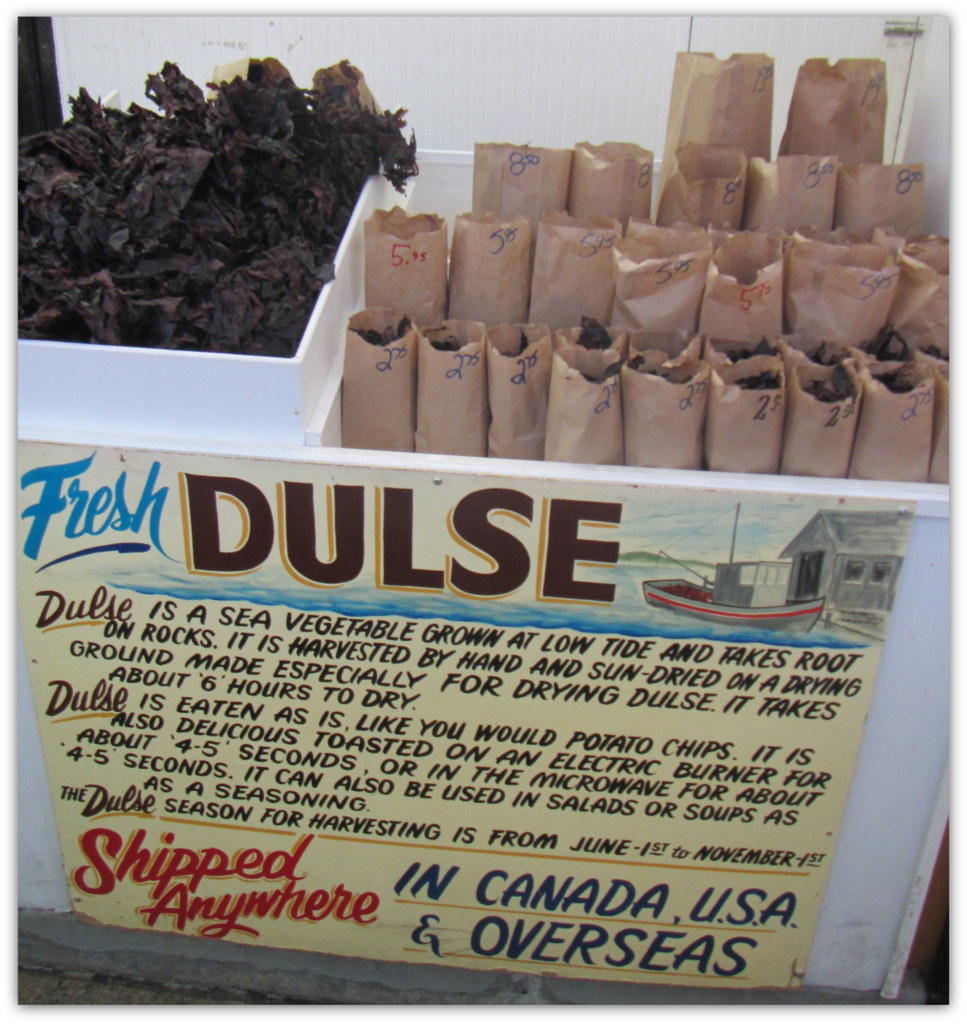