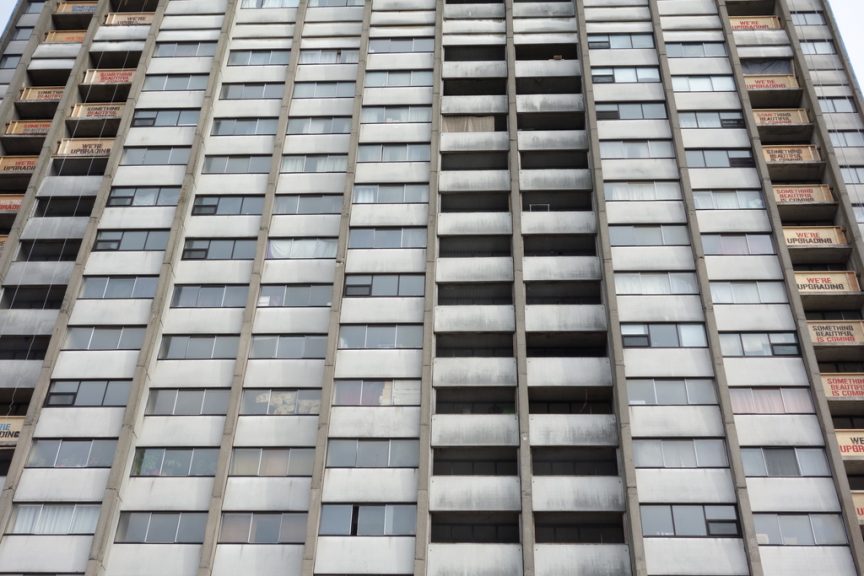 Fenwick Tower has been in the news lately: first bits were blowing off in the recent big winds, and now I realize the name of the building has been changed to The Vuze. It got me thinking about the tallest building in the Maritimes (33 stories) that has been universally hated since it was built 45 years ago in 1971.

I generally like the concrete mega-structures of this period, but Fenwick always felt like it was unfinished or at least under-detailed. It was in fact unfinished when Dalhousie University bought the building for a bargain (just over 5 million), when the builder, Kenny Construction of Yarmouth, went bankrupt. It was being built as luxury apartments but became much-needed student residences.

Fenwick was still new when I took this dreary photo in the mid 1970s. The Clyde Street Liquor Store is in the foreground. The tower has always stuck out, and viewed end-on is particularly needle-like and vulnerable feeling. Here’s a view from the 1980s from our house on Inglis Street. The tower actually doesn’t look so bad in this flattering light, just wildly out of context in the Victorian streetscapes of the Old South End. Now Fenwick Place (its original name) is being re-imagined by the developer Templeton Properties, so I stopped by for a last glance at the building in its old skin. It was looking delightfully decayed as preparation for re-cladding starts. This style is often called “Soviet Era.” It is startling how the tower was injected into the streetscape of two-story Halifax boxes. Timid buttresses at the base of the tower were a strange little gesture that acknowledged the ground-hugging neighbours. The building was designed by the prominent local architecture firm Dumaresq and Byrne. The relationship with the street will improve with a new development branded South Village. You can take a  virtual tour here.

When I looked for some 1970s retro charm, all I could come up with was a delightful little section of breeze-block… and a panel of bright tile.  I don’t know if the tile is original but it feels right. On view in the Legislature (Sir William was Lieutenant Governor too)

Sir William was born in Annapolis Royal; his father was widely believed to be the Duke of Kent which would make William the half brother of Queen Victoria; and he was a much admired hero of the Crimean War.

While we waited to go up in a construction elevator to visit the model suites we asked a cheerful renting agent about the project’s name: Icon Bay. Was it named for some feature along the Bedford Basin? “See that man leaning against the black SUV? ” he said, pointing to a group of dudes down the steep parking lot. “He was in Miami and saw a new project called Icon Bay, and just borrowed the name.”