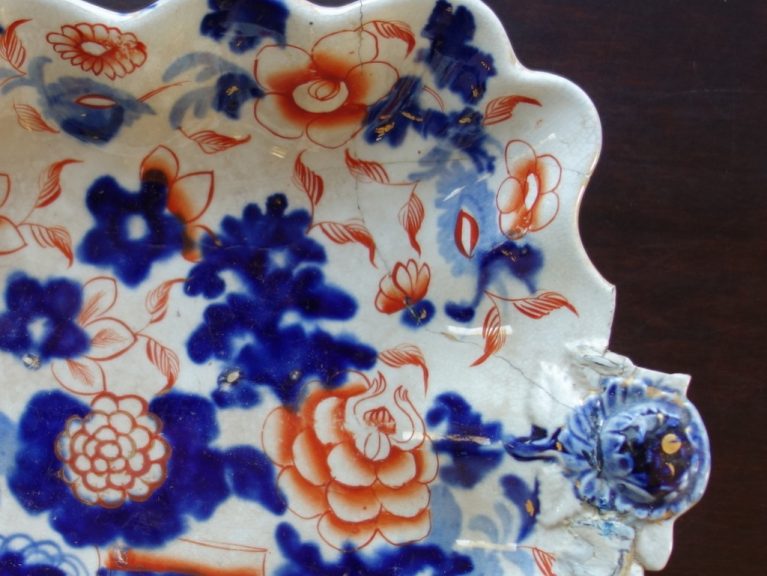 Pneumonia has struck! But I’m on the mend which got me thinking about some delightfully mended objects we have around the house.

Take this gilded fruit stand, perfect for a mound of December clementines. But turn it over and obviously one handle was broken in the past. A strong repair, using two metal staples, has probably added a hundred plus years to its decorative life. This staple technique was used for centuries, back into antiquity; breaking the pottery just never grows old. A repair with staples was the job of a professional china mender. It would be challenging for the DIY crowd to hand drill the clean, shallow holes that didn’t go all the way through to the other side.

I imagine this stapled, porcelain teacup was still used after its repair but always reserved for a family member and not given to a guest. That someone went to the trouble and expense to have a piece repaired suggests it was special. A cultural historian could perhaps speculate: was the china expensive, did it have family significance, maybe it demonstrated social status even if broken.

When we were acquiring things in the 1980s, the staple mends added charm to these pieces. It also made them inexpensive (we have a good collection of chipped and cracked china as well). An example is this exuberant, early 19th century bowl. Seven staples were used to rebuild most of one end. I feel part of a long history of caring for the piece. Cast iron is another material where repairs cannot easily be concealed. This trivet (to support a hot and heavy sad iron) was manufactured in Scotland sometime after 1867 and made its way to Bridgetown in the Annapolis Valley. Maybe quite early in its history the trivet “had a fall” and the handle snapped off (cast iron is very brittle). Cast iron cannot be welded so the piece was taken to a skilled blacksmith who made an elegant truss and riveted the pieces together. These objects are stronger after their mends, and show more character than their undamaged brethren. After my pneumonia will I be more interesting too? I guess we’ll have to wait and see. The cramps are wrought iron and molten lead sealed the joints.

Recently we spent a couple of weeks in Copenhagen. One museum we visited was the Glyptotek, which houses a large collection of Greek and Roman sculpture. Many ancient marble sculptures have lost arms and legs and especially noses. Turns out that up until the end of the 19th century it was traditional to replace limbs and provide new noses and ears. Tastes change and these later restorations were seen as hiding the “true” nature of ancient works and were removed.

A popular exhibit was a collection of marble and plaster restoration noses (nasothek) removed from sculptures in the museum’s collection! Now how can I  insert “nasothek” into more conversations?