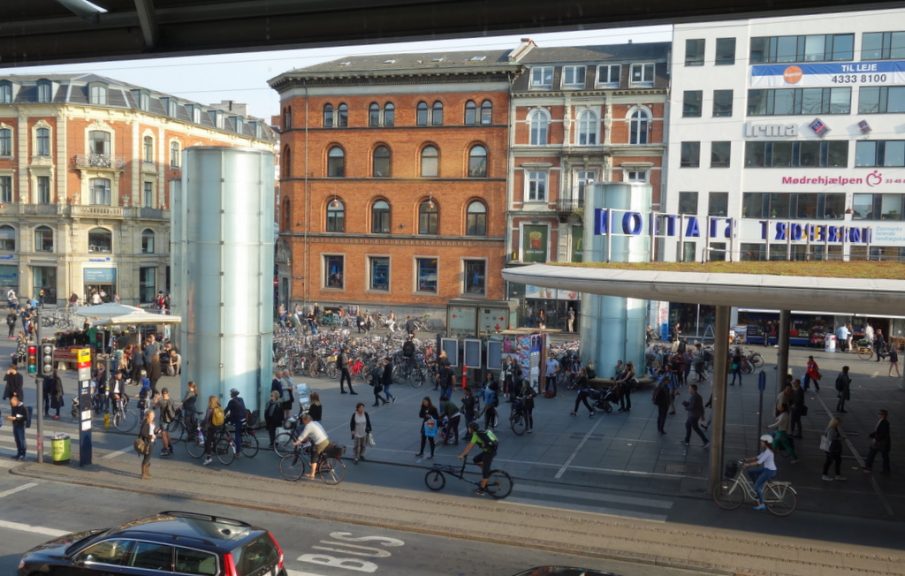 These days it feels like the answer to most questions about the future of Halifax is “When the Centre Plan is approved.” One of the Core Concepts of the plan is pedestrians first: the needs and comforts of pedestrians would be foremost in the planning process.

We just spent nearly three weeks walking in Copenhagen, Denmark which is ground zero for a pedestrianized downtown. What a good excuse to show you some of our vacation snapshots!

Preparation for our visit really began last May when Dalhousie gave an honorary degree to the Danish urban planner Jan Gehl. His great insight was to actually spend time observing how people used streets and public spaces, and then creating plans that improved the quality of urban life by re-orienting city design towards the pedestrian and cyclist. His work has transformed Copenhagen and urban spaces around the world.

We attended a lecture he gave at the School of Architecture. Here he is wondering why cities often have departments dealing with cars but not Departments of Pedestrians and Public Life. Is that proposal in our Centre Plan? In Copenhagen the moment we stepped outside we had to be super aware that the environment was bicycle rich. Bicycle lanes are often at a separate grade from the sidewalk but usually only a few centimeters lower. Easy to  step off the curb and find yourself in the path of 14 fast moving bicycle commuters. On completely pedestrianized streets bicycles thread their way through the foot traffic as do the occasional car and truck. The cars look particularly sad and lost, waiting for openings in the walkers. We were staying a block away from Norreport, the busiest transportation hub in Copenhagen. Here you can catch buses, the metro and regional trains. Getting to the airport or other districts of Copenhagen was super easy. There are several huge bicycle corrals. A revelation was how interesting bicycle and pedestrian infrastructure can be when cars don’t have to be accommodated too. A relatively new bicycle and pedestrian bridge makes a significant link connecting two waterfronts. Sort of like realizing that the Northwest Arm Bridge just needs to be for walkers and bicycles. This waterfront structure was part pathway and part recreation facility. It was pulled away from the shore to capture more sunlight.

On a dreary Sunday afternoon it was unused but we were told that on sunny days it is crowded. I expect these comfy lounge chairs will be the next movable street furniture we see in our public spaces. Hardy Danes were swimming in the harbour as well as soaking up the rays.

We witnessed folks making great use of downtown parks. There appeared to be many meetups and I believe that drinking is allowed (or tolerated). While we were in Copenhagen I read posts from people in Halifax distressed by the new bike lane on University Avenue. From that distance it felt like they were on the wrong side of history but it was also clear how much our transportation culture has to change. And Halifax has way too much topography.