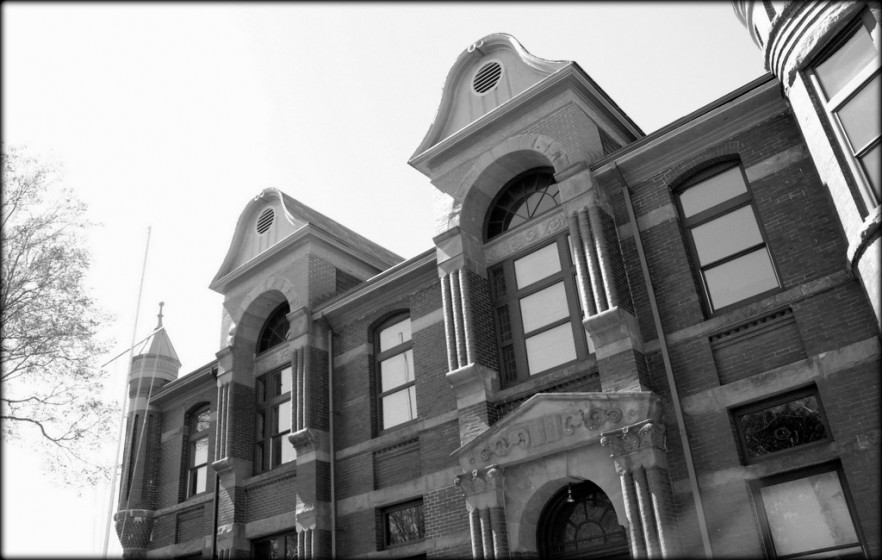 Did you have a good time at Doors Open? On Saturday we sampled five sites. Our favourite was the Atlantic School of Theology on its beautiful campus beside the North West Arm. Let me show you some pictures of little and big surprises.

I was looking forward to seeing inside the 1898 college building designed by James Charles Dumaresq. I assumed the building was still used as classrooms but learned it has been empty for some years. The school had been making good money renting the old fashioned interior as a film set, but of course that has gone bye bye along with much of the film industry. Tom Selleck’s movie office was in a room to the front left. Much of the interior was unchanged since it was built. The desirable linoleum floors perhaps date from the 1950s The most decorative element inside is a fireplace in a tiny office. The curved brick (painted) on the sides are similar to the curved brick “columns” at the front  entrance. Next door on Francklyn Street are two identical houses that I think were built as residences for professors at the Divinity College. They probably date to the early 1900s. Plans are to turn them into a hospice. What a good idea.

Here is a back view of the houses. The gap will be filled to make the large hospice building. One of the houses was open and it was fun to see period details before they are altered. Sheila and I particularly enjoyed the 1950s kitchen that reminded us of our childhood homes.  The pull-out cutting board was a familiar feature as was the aluminum edging to the counter top. A perfect complement to the older buildings was the beautifully detailed, college library designed by our friend George Rogers. For years we had planned to visit and this was a bonus we had not anticipated.

The back of the library takes advantage of a panoramic view over the North West Arm. On its roof is a deck with this view of the Yacht Squadron across the Arm. The perfect place to eat your lunch on a summer day. The interior of the library felt peaceful and contemplative. A series of giant concrete circles unite the columns on the top floor. Can you see why we were charmed by our experiences?  Make the effort to visit the site yourself and stop by the library or wander down to the shore. Weddings were so much simpler in those days. We got married at 4:00PM on the Friday of Labour Day so we wouldn’t mess up our guests’ long weekend.