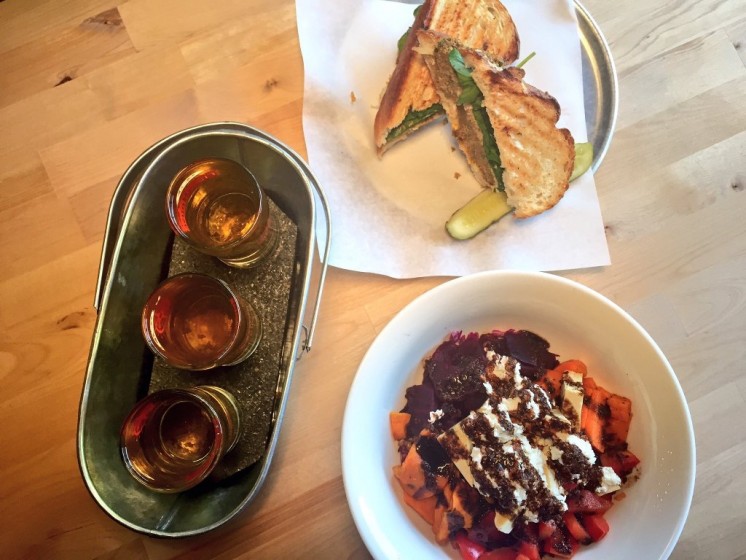 These are our Fredericton essentials, but our list is by no means exhaustive. Have a place you love that we’ve missed? Leave it in the comments! 1. Grab a taste of Johnny Jacks at the Sour Grape:
281 Restigouche Road, Oromocto, NB
A totally weird (in a good way) cafe meets brewpub where you can pair gigantic homemade peanut butter balls with your beer. Bring some board games and stay a while. This stop is just outside Fredericton in a town called Oromocto, with the brewery itself located next door, and is a good first stop for a Fredericton food adventure. 2. Read the Whiskey Bible at Lunar Rogue:
The whiskey menu at The Lunar Rogue has featured more than 500 Single Malts and Premium Blends. The menu and tasting notes are displayed in the Whiskey Bible. But if you’re not a whiskey drinker (like me), go with a Picaroons and pub fare on the patio, or curl up in one of the cozy, dimly lit booths and spend a few hours with friends. 3. Order a hot or cold bowl at The Abbey:
546 Queen St, Fredericton, NB
It’s probably the healthiest thing we’ve ever eaten. And it was really, really good. So good, in fact, we’ve been on a tirade of combining piles of veggies into oversized nourishment bowls at home ever since. It’s a nice space, too, a casual atmosphere that’s a mix of art gallery and eatery. Most of the menu is vegan or vegetarian. 4. Sip Cider at Red Rover:
546 Queen St, Fredericton, NB
Red Rover Cider makes some of our favourite ciders in the Maritimes. Now that they’ve moved in with The Abbey, you can relax with a flight or a pint or get a growler fill to go. Truffles fit for a Queen (literally – like, of England) – Schnitzel Parlour

5. Sample chocolates fit for the Queen (literally) at Fracklemans Truffle Shop:
304 Union Street, Fredericton, NB
In 2010, the owners of Fracklemans made a special truffle for Queen Elizabeth called the Royal Frederictonian. These truffles were served to Queen Elizabeth for her Easter celebrations and later to Charles and Camilla during a visit to PEI. There is also a great German restaurant on-site called The Schnitzel Parlour. Both are worth going out of your way for. 6. Take a New Brunswick Craft Beer Tour Without Leaving Your Seat:
659 Queen St, Fredericton, NB
The James Joyce Pub at the Crown Plaza Hotel has 24 taps, all local. That means you can taste beer from almost every NB brewery on almost any given night. In fact, they have the most NB craft beer on tap in the province! And the staff spend time visiting and getting to know local breweries (the manager has met every single brewer that appears on their wall), and they host “meet your maker” nights where the public can meet New Brunswick brewers. The space is made for spending many hours with friends. Go! 7. Taste a mead made with urban bees at The Crowne Plaza:
The Crowne Plaza in Fredericton keeps five bee hives and a small garden on their rooftop in downtown Fredericton. Honey from the hives is transformed into intoxicating bottles of Crowne Jewel Rooftop Mead by a local meadery. Due to the small scale, localized production and limited number of hives, you can taste hints of what plants the bees got into. It is very, very good, plus it really doesn’t get much more local than this! 8. Have a three-course croissant breakfast at one of the best bakeries in Canada
361 Queen St, Fredericton, NB
Choosing is difficult at Chess Piece Patisserie, named one of the best bakeries in Canada by Huffington Post. We ordered macarons and a three-course croissant breakfast – plain (appetizer), Swiss and spinach (main), and chocolate (dessert) – to go and ate in nearby Officer’s Square. The coffee here is also well worth ordering! 9. Pack your picnic basket at the Boyce Farmers’ Market:
There are many markets in Fredericton, but Boyce is our go-to! Even at 9am on a rainy Saturday, the market is alive with people shopping and getting their early morning food and coffee fix. Try the samosa truck, extremely popular after a night out on the town, or, my favourite, the scallop and lobster rolls! Yum!

10. Explore food and art from around the world at the Fredericton Cultural Market:
28 Saunders St, Fredericton, NB
For even more mouth watering food options, you’ve got to check out the new Cultural Market. This weekly Saturday market aims to reflect a traditional cultural market, with culinary representation from India, Syria, China, Mexico, Lebanon, and so much more!  Shop for international crafts, local delicacies, and delicious meals. 11. Snap a pic with the World’s Largest Potato:
701 HWY 105, Fredericton, NB
Find this guy just outside Fredericton at Harvey’s Big Potato and Moxon’s Country Pumpkin Market. There’s also a great petting farm next door if you’re an animal lover or visiting with kids.

12. Cool Off at The Urban Almanac:
75 York Street, Fredericton, NB
Grab a cold press coffee and do a little shopping at The Urban Almanac. They carry a curated selection of cool home and pet items. Be sure to say hello to Cooper, the resident shop dog! 13. And, since there are 7 breweries within 15 minutes of the city, you should…
Definitely visit Maybee Brewery. The “style agnostic” brewery is just outside the city. Grab a flight and a growler fill at Grimross, then stop into Picaroons, hands-down the best known brewery in New Brunswick, and a huge supporter of the local craft beer industry in Fredericton. They’ve fostered many a new brewery, helping them get up and running and supporting them while they work on their own space, so it’s also here that you can grab a fill of Half-Cut Brewing. And of course, there is Johnny Jacks (see #1).

We’ve yet to visit Mama’s brewpub or the newly opened tasting room at TrailWay Brewing (we just missed the opening!). Lucky for us there are at a few different craft beer bars, including King Street Ale House, where we tried TrailWay alongside a selection of other local and Maritimes craft beers. And to top it all off, Gray Stone Brewing is opening soon! 14. Once you’ve had your fill…
Walk or bike it all off on the water trails. There are more than 85 km of non-motorized trails that stretch along the river in Fredericton. And be sure to snap and share your favourite stops as you go – Fredericton was one of the first cities in Canada to offer free city-wide WiFi!