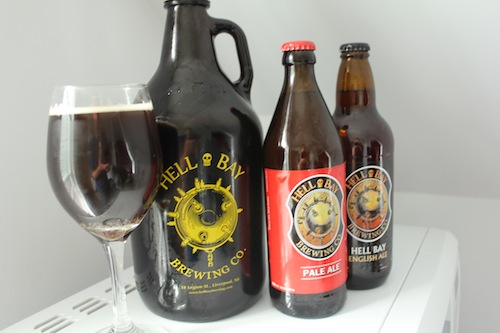 One of our first Local Traveler trips was up to Liverpool to visit Lanes Privateers. We were on the way to Yarmouth looking for a new spot to grab a bite to eat. It was spring, pre-chowder trail chowder burn out, so we decided to split a bowl and an appetizer. That’s when we discovered Hell Bay Brewing. It was listed on the Lanes menu, and neither Drew or I had heard of it before. This was well before the two of us had really started digging into the local craft beer scene, but after our interest in all things local had started to peak.  Our server told us all about Hell Bay, a local brewery that, at the time, was brewing out of a home barn. A chef by trade, Marc Baillie started brewing Hell Bay beer as a hobby, but it wasn’t long before Lanes, Lanes guests, and then his whole community caught on.  Pretty soon, that hobby was taking over most of a large shed at his home in Cherry Hill, and demand for his beer throughout the community was growing.

In spring of 2013, Marc and his wife Melanie moved the operation to a large property on the Liverpool waterfront.  We visited a few times during the summer and each time the place was packed!  The new area allows them to brew more beer and have a big, bright storefront where they sell growler fills and bottled beer.

Like any good chef, Marc experiments with different brews.  He has two standard beer, his Pale Ale and his English Ale that you can always get in growlers and in 500ml bottles, and he also regularly does a Scotch Ale. During Privateer Days we had a chance to try their newest offering, a dark cream ale.

Hell Bay Brewery is well worth the trip to Liverpool alone, and if you haven’t been to Liverpool recently, you really need to go. This growing town is bursting with energy and activity.  There are beautiful beaches, exciting events, and growing businesses. In fact, in the last year 26 new businesses have opened their doors!