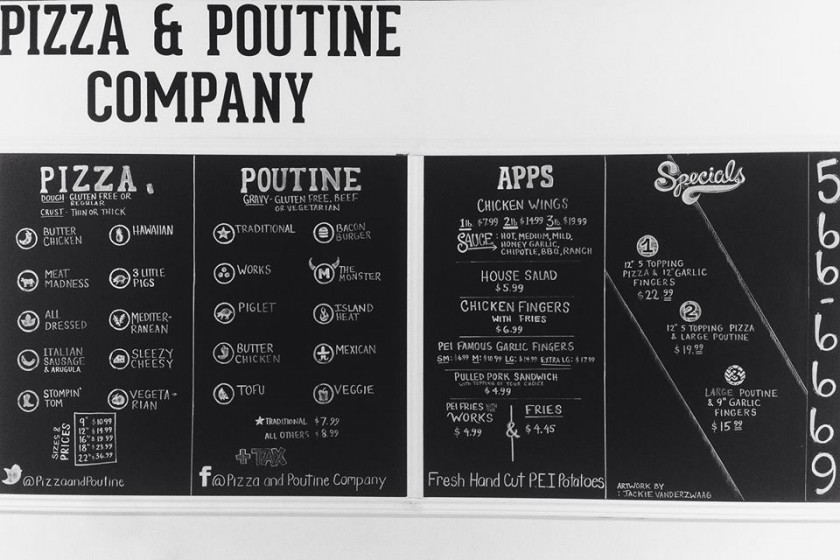 There is a new wave of young entrepreneurs that are shaking up the status quo. We have been seeing this all over Nova Scotia, and in PEI we found it in Ali Younis and his new restaurant, Pizza and Poutine.

We met Ali outside of the Young Folks and Kettle Black Coffee Shop. He was picking up some locally roasted coffee for his restaurant, we were waiting for our coffee, and a conversation started up. Eventually it came to light that Ali was a new business owner. A very new business owner, just three weeks past opening and only a few more past graduation.

Ali had come to PEI to study business. He enjoyed classes but as his co-ops progressed he felt ready to take on the world and do his own thing. During his last co-op he decided to open his own restaurant, a cool, all-local joint serving student (and, lets face it, everyone else’s) favorites, pizza and poutine. Between finishing school, working a co-op and opening a new business, the past few months have been a whirlwind for Ali. He kept cost and environment in mind by using some refurbished items in the reno. For example, all of his chairs were purchased and refinished from an old coffee shop nearby.

He says that the community has been a huge help. Friends and friends of friends came to his aid, helping him turn a building that hasn’t been renovated in more than 25 years into a clean, modern restaurant. And the community hasn’t been the only ones to lend a hand, so has the Internet. Ali had never worked in service before, saying he has learned so much from Google and YouTube. Those online lessons are serving him well.

The food is a welcome remix to standard pizza and poutine options. we ordered one of each to share. For the pizza we went with the Stompin’ Tom, picked almost solely for the name with consideration given to the jalapeno bacon topping.

For the poutine we went with the Piglet: fries, cheese, jalapeño bacon and pulled pork topped with gluten free gravy. Both were good but I was particularily impressed with the pizza, one of the better gluten free pies I’ve had.  Big props on the toping options, some of the coolest I’ve seen for a thin crust.

In addition to the jalapeno bacon, you could also top your pie with sliced potato, pulled pork and a mix of other weekly local treats that Ali collects from the local farmers who supply him. While they have only been open a few weeks, reception so far has been good. They have stuck to Twitter and facebook and word of mouth so far only promo so far but they have been getting great reviews.

You can check out Pizza And Poutine at 159 Kent Street in downtown Charlottetown! Tell Ali we said HI!