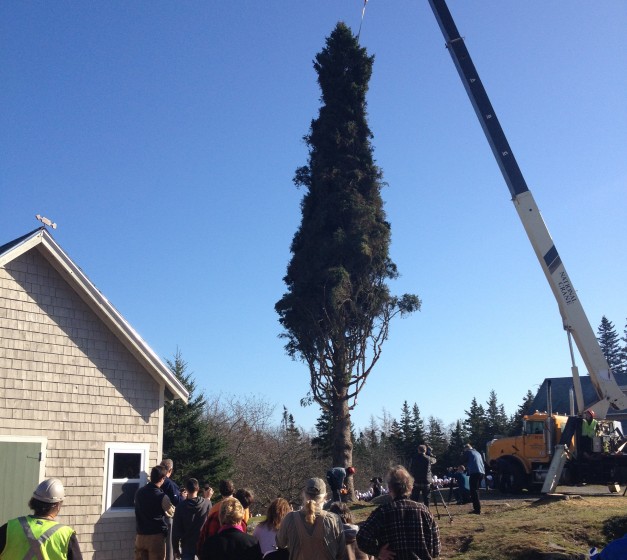 In elementary, I was quite taken with the story of the Halifax Explosion.  So much so, that in grade 5 I took it upon myself to organize a lunch time play to re-enact the event.  As anyone who learned about the Halifax Explosion in school knows, it was followed by a massive snow storm, and Boston sent us trainloads of supplies and medical aid.

To show our gratitude, Nova Scotia sends our biggest and best Christmas Tree to Boston each year. That tree is erected in the Boston Common (@TreeForBoston). We did it the first time in 1918, and then made it an annual event starting in 1971.

For quite a few years now, I have wanted to see the Nova Scotia/Boston tree cutting, but for one reason or another I never did make it out. And then on Monday, @VisitNovaScotia sent out a tweet with the event details that I just happened to catch.  It was in Shelbourne, a bit of a trek considering my already travel-filled week.  I decided it once again wouldn’t work out, and went to bed.

But the next morning I still couldn’t shake my desire to see the tree.   I re-arranged my schedule and hit the road, a bit too late to make it on time, but hopeful for a quick drive or a late start. I hustled Charlie into the car and spent the 2.5 hour drive enjoying the sunshine and some CBC.  Drew pre-mapped the location for me (I’m directionally challenged) and I made great time.  When I arrived at my handy pre-mapped point, this is what I saw… I called Drew who assured me that the tree cutting WOULD be in the middle of nowhere (being a big tree and all), and I was a few minutes late for the start time, but it just didn’t seem right.  After a few frantic tweets and a wrong turn, I did find the location, about 5 minutes down the road from my not-so-handy Google map. I arrived just in time to see them cut the tree.  When I walked up, there were around 200 people gathered to watch, and a group of school kids chanting, “Cut it, Cut it!”. Within moments, the chainsaw was going and the tree was starting to lean. And then it was down! The crowd cheered, while staff quickly moved in to load the tree onto the truck that would take it to Boston.  In retrospect it seems like a bit of a funny decision to have driven 2.5 hours to watch a tree come down, but it felt like being part of a little piece of history.  We’ve been sending a tree to Boston for more than 40 years, a thank you that’s been almost 100 years in the making. When I was leaving, one of the staff gave me a Nova Scotia hat and a small NS spruce seedling.  The tree is selected from a number of entries across the province every year, so who knows.  Maybe if I am really careful, 50 years from now my tree will make its way to Boston.