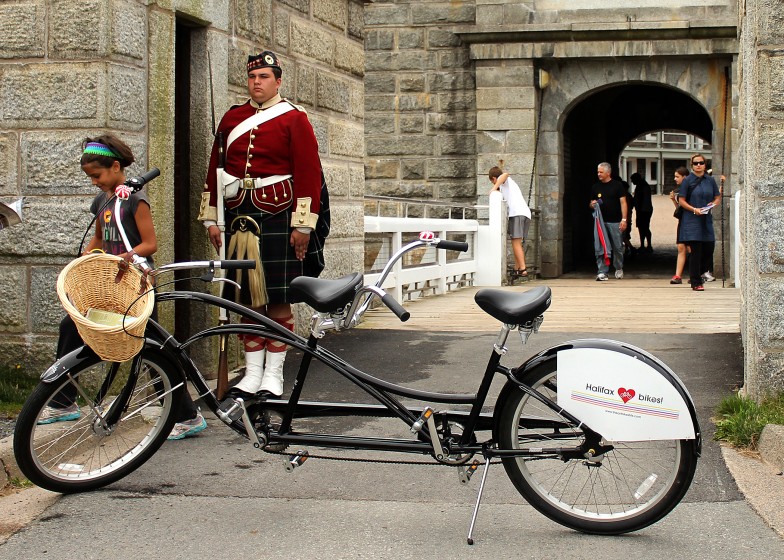 August 18, 2012 The Local Traveler
Editors Note: I am happy to bring you a guest post from Rachel, the writer behind The Penniless Traveler (facebook.com/ThePennilessTraveler).  I am a frequent viewer of Rachels blog on budget friendly travel and was thrilled to hear she was paying a trip to Halifax this summer.  I hope you enjoy her stories as much as I do! – @GillianWesleyNS Here is just one of the highlights from my cruise to beautiful Nova Scotia in August with my parents and sister. It was foggy and raining as we pulled into the harbor in Halifax. I hear this is pretty much the norm in Nova Scotia and we weren’t bothered by it at all. To start off our morning adventure, we began to walk up the hill to The Fort George Citadel, a star-shaped fort above the city.
Our breath got heavier and our steps smaller, and by the time we reached the entrance we had all shed some layers. When my dad asked the woman at the ticket counter what the weather would be like for the rest of the day, her reply, “This is it,” said it all. It was drizzly and foggy all morning. We walked under the gate and into the “courtyard” which was covered with gravel and puddles. Not halfway across, we heard a bagpipe start to play and my hand shot into the air. I love bagpipe music, maybe a little too much…especially for someone who has absolutely no Scottish heritage. But in that moment, I was in paradise. Coincidentally that is also what triggered my discovery that the name Nova Scotia translates to “New Scotland”! I know…you got there before me…but I made it eventually, didn’t I? We got a tour from a college student dressed in army attire. He knew quite a lot about the citadel and the lifestyle of the soldiers over time. Maybe that’s because, for job training, he was made to sleep a small tent, in the rain, with four other “smelly, sweaty guys” (his words not mine). I know that would have done it for me. On the top of the citadel we could see all of Halifax. Our guide showed us the canons and said that they would have been used for defense, in the event that any enemies could have made it past the other troops of soldiers and up that killer hill. “Now,” he said smiling, “we use them to shoot at the student loans building just down the hill.” We walked around inside the walls surrounding the citadel and saw the armory before we had to duck out early and head back toward the ship. Partly so we’d have a chance to eat lunch and partly so we could stop at the comic book store we’d passed on the way up. Outside of the store were chalk drawings of superheroes. That’s all my sister needed, she was in heaven. Strange Adventures, friendly staff, and all the comics you could hope for. I even bought a book with comics (does that make it a comic book?) written by someone from Halifax about his trip to Texas.  Exciting read.
My trip in the opposite direction was just as exciting, although I don’t have a book to prove it. Terrific views of the city and ocean from the top of The Citadel, an afternoon by the lighthouse in Peggy’s Cove and just enough rich history to satisfy this History Major’s appetite. I would love to go back any day.
Location:
Citadel Hill National Historic Site
5425 Sackville Street
Halifax, NS
Season:
May 4 – June 30th: 9AM – 5PM July 1 – August 31: 9AM – 6PMSeptember 1 – October 31: 9AM – 5PM