I’ve had a hankering to revisit the far end of the Eastern Shore and that’s what we did in the middle of August. It has been years since we sampled the coast above Country Harbour, and some of the roads we travelled were new to us. So lots of fresh noticing material.

After a weekend on Caribou Island, near Pictou, we set out towards Guysborough. It felt prudent to fuel up before starting down the shore, so we stopped at a new travel centre on the TCH beyond Antigonish, operated by the Paqtnkek Mi’kmaw Nation. I admired the elegant designs cast into finely finished concrete wall panels. Wonderful to see a highway rest stop that is actually about a place. 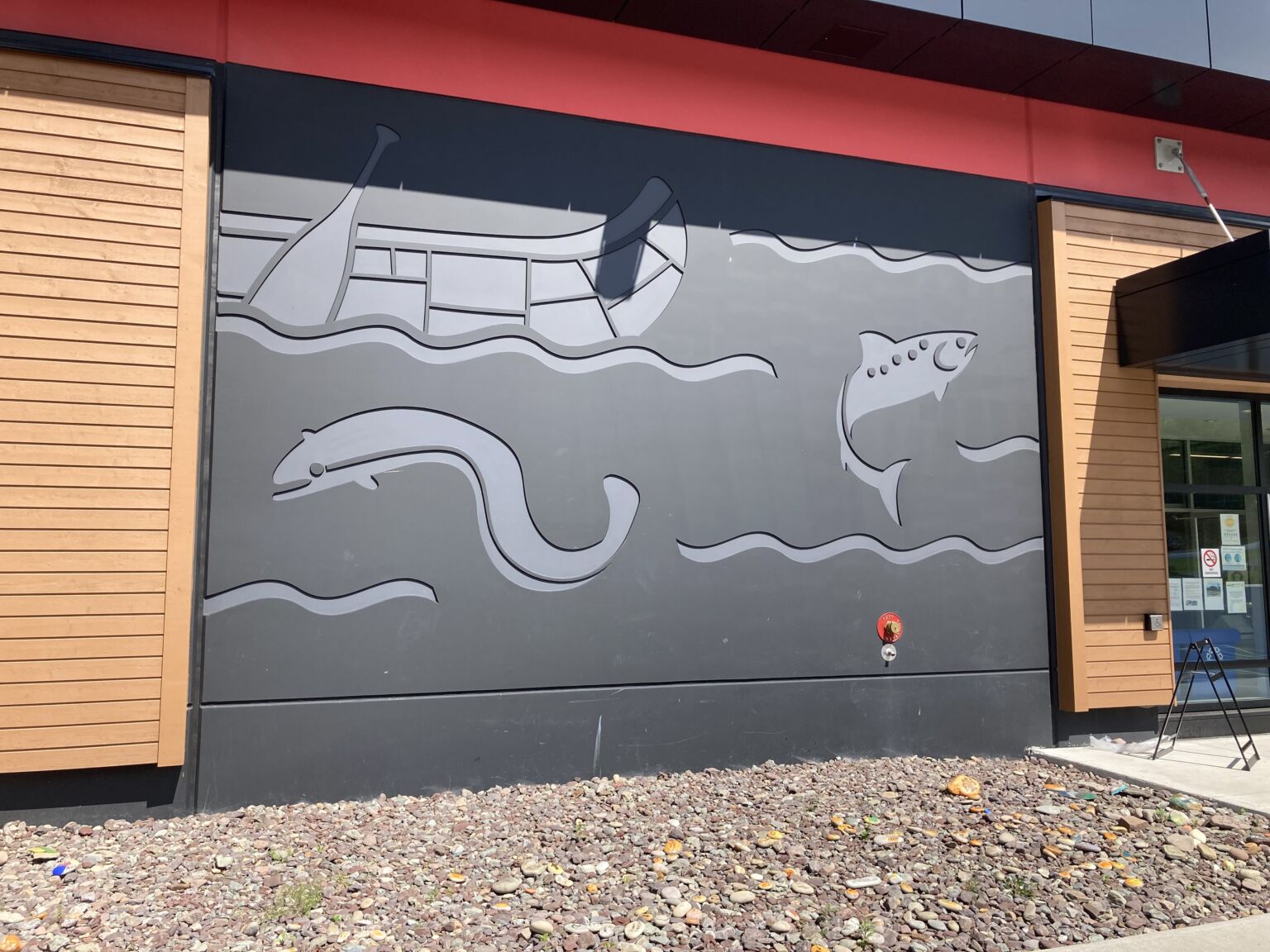 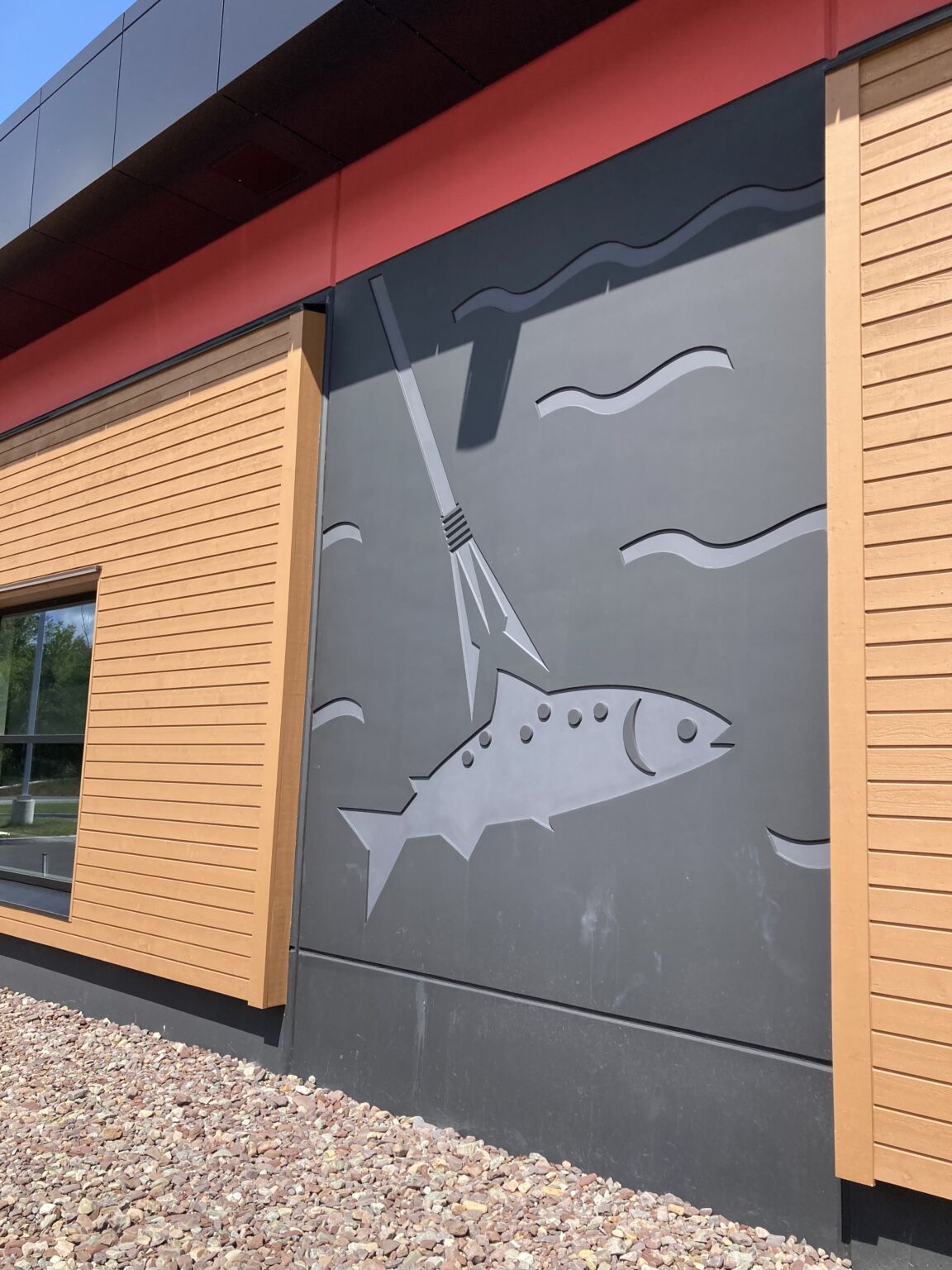 Not being in a hurry encouraged us to investigate the monastery in Monastery. A short stroll along a forest path led to the Holy Spring and assorted shrines. I enjoyed the large print signage that may indicate who the clientele is. We did not take the waters. 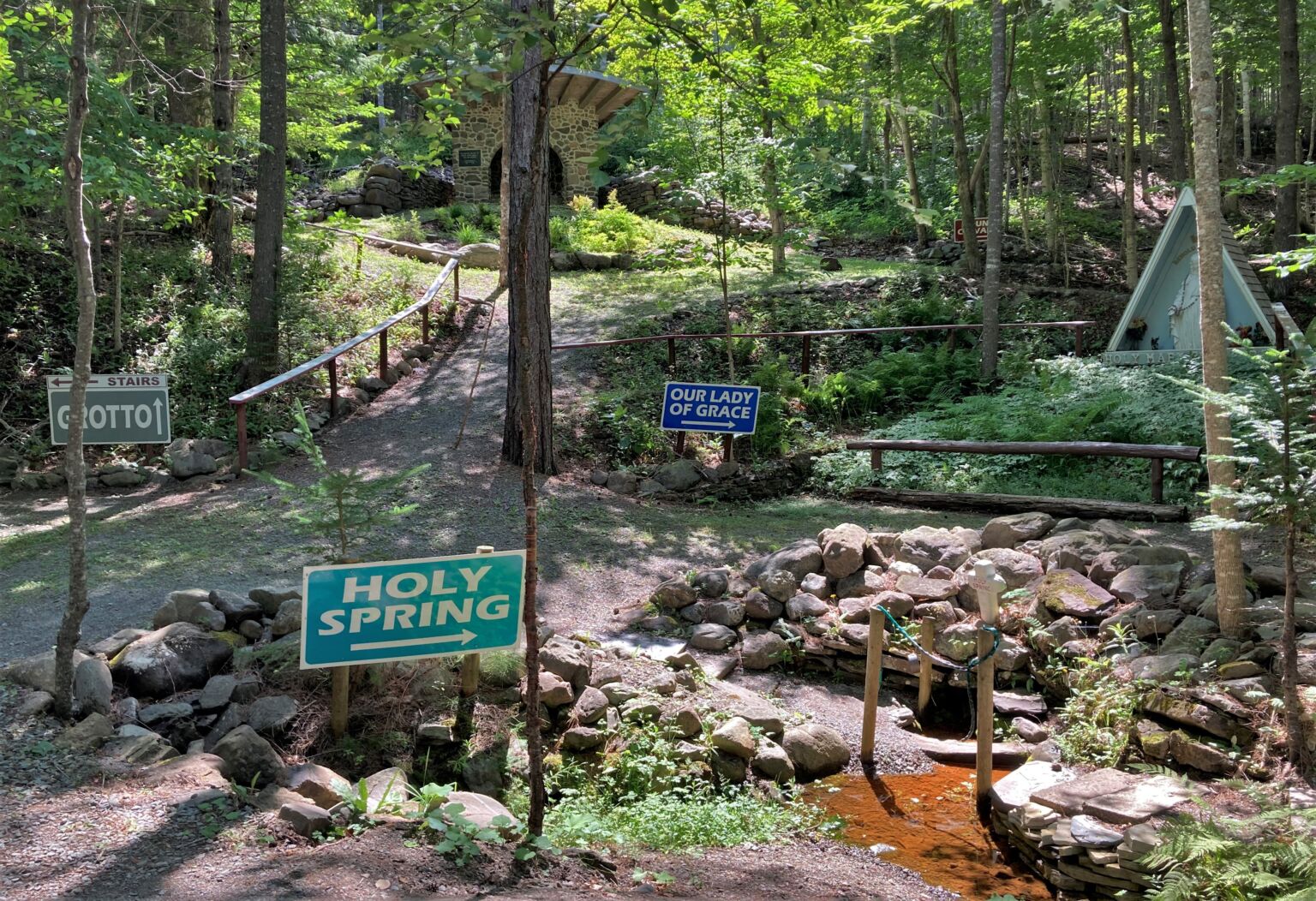 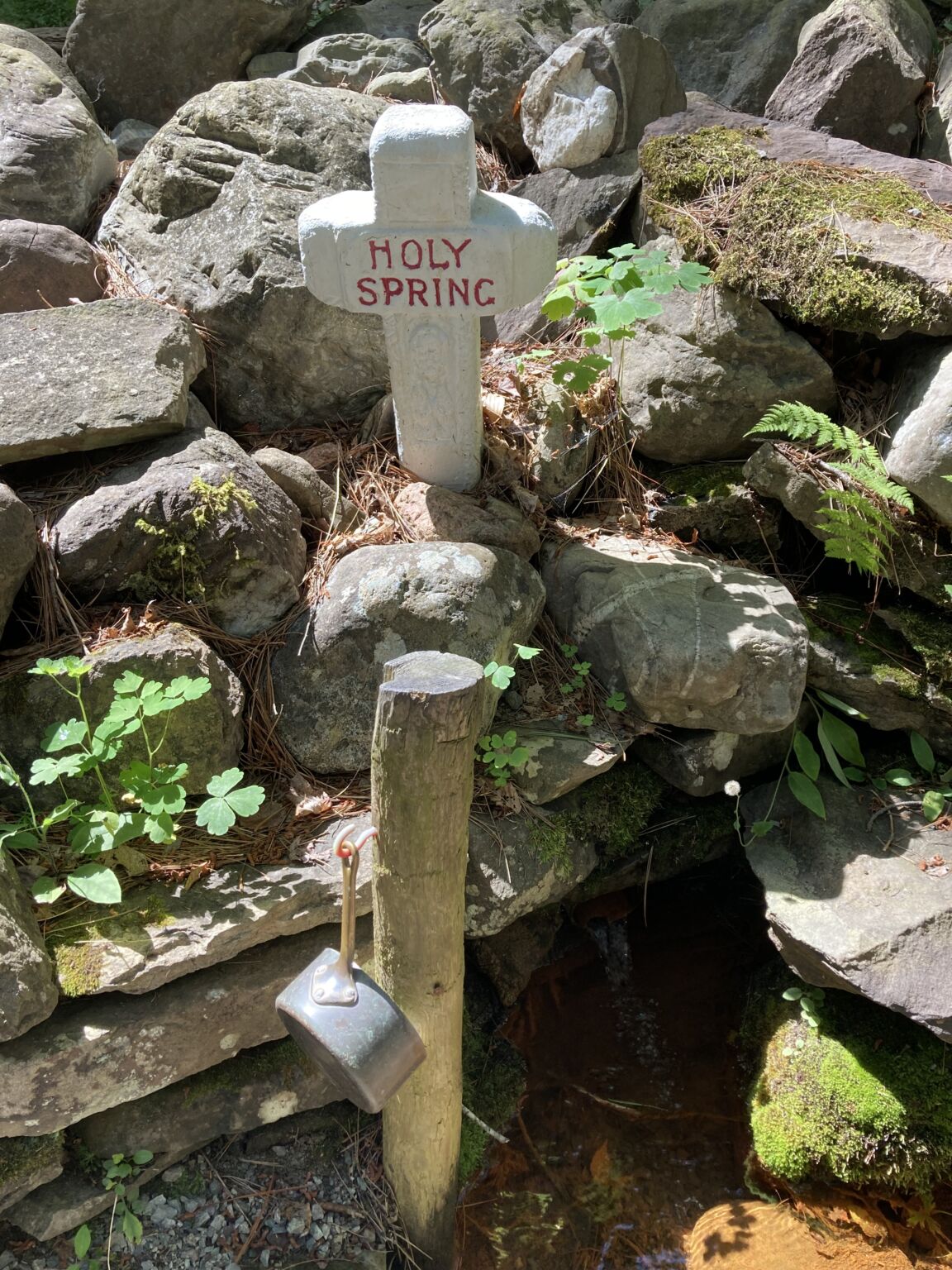 The monastery site was developed in the 19th century, and has been run by a succession of religious orders. Check online for the whole complicated history. 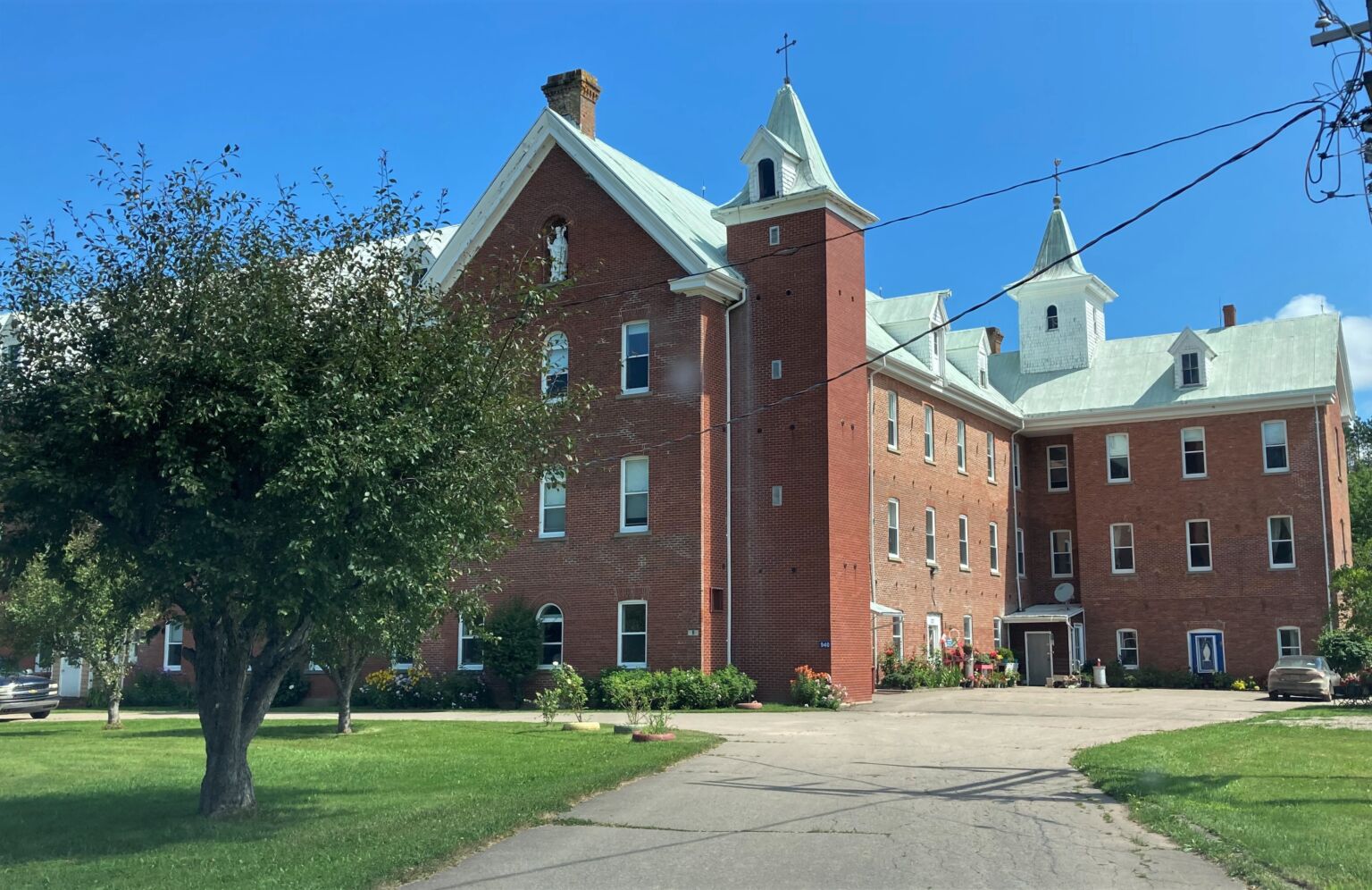 Boylston was so pretty and tidy we had to stop for a moment to look around. Old shopfronts always attract my attention. 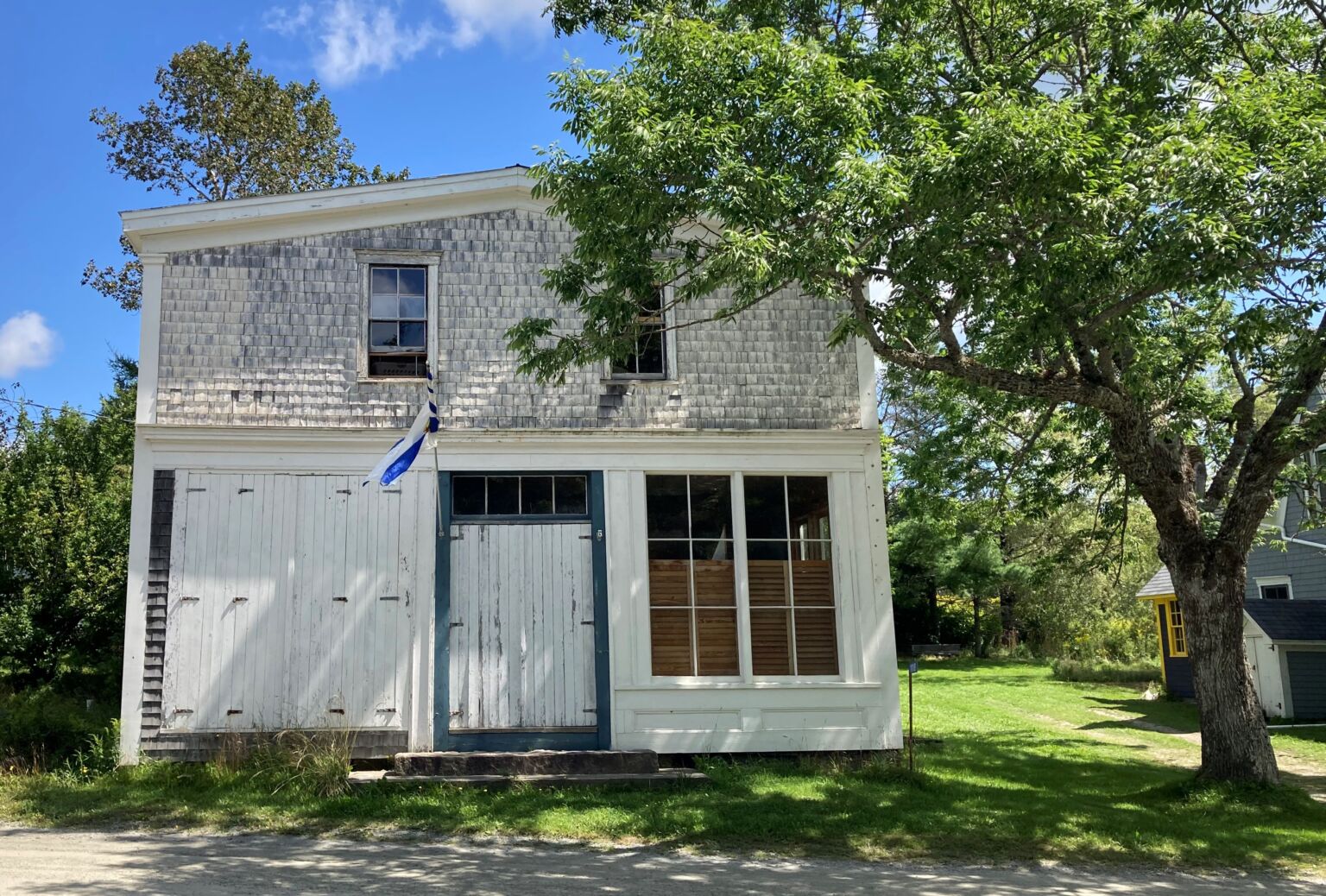 The Boylston United Baptist, facing the Milford Haven River, was the first of many little white churches we paused to examine, and cemeteries we wandered. 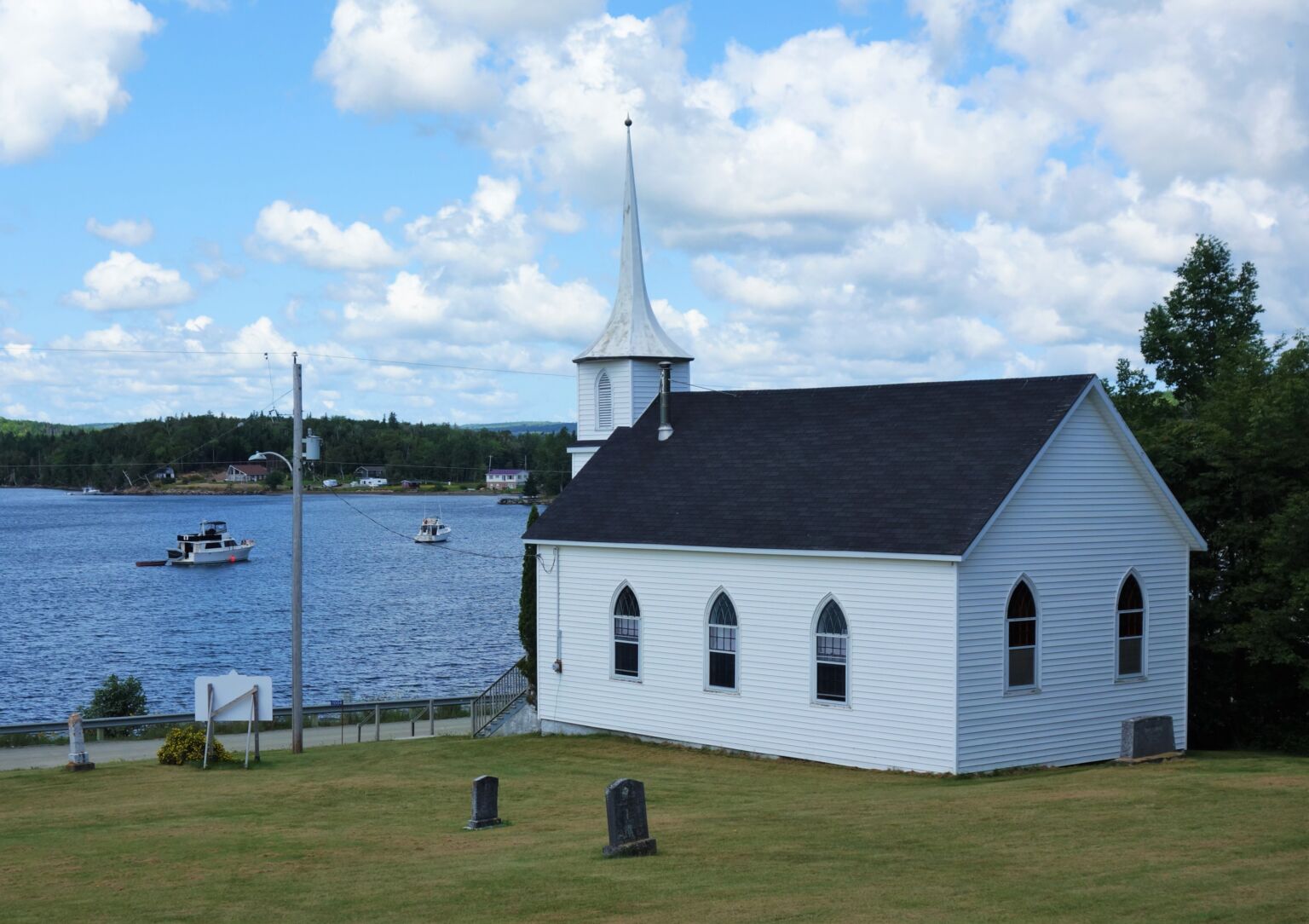 Guysborough town felt a bit like someone had pushed the pause button. We stopped at the tourist bureau attached to the Old Courthouse Museum to learn about lunch options. On that day, sandwiches from the grocery store was it. In the museum the giant temperance banner had a clear message. Rural communities in Nova Scotia have had a long, and not particularly healthy, tradition of “the eyes of all are upon you.” 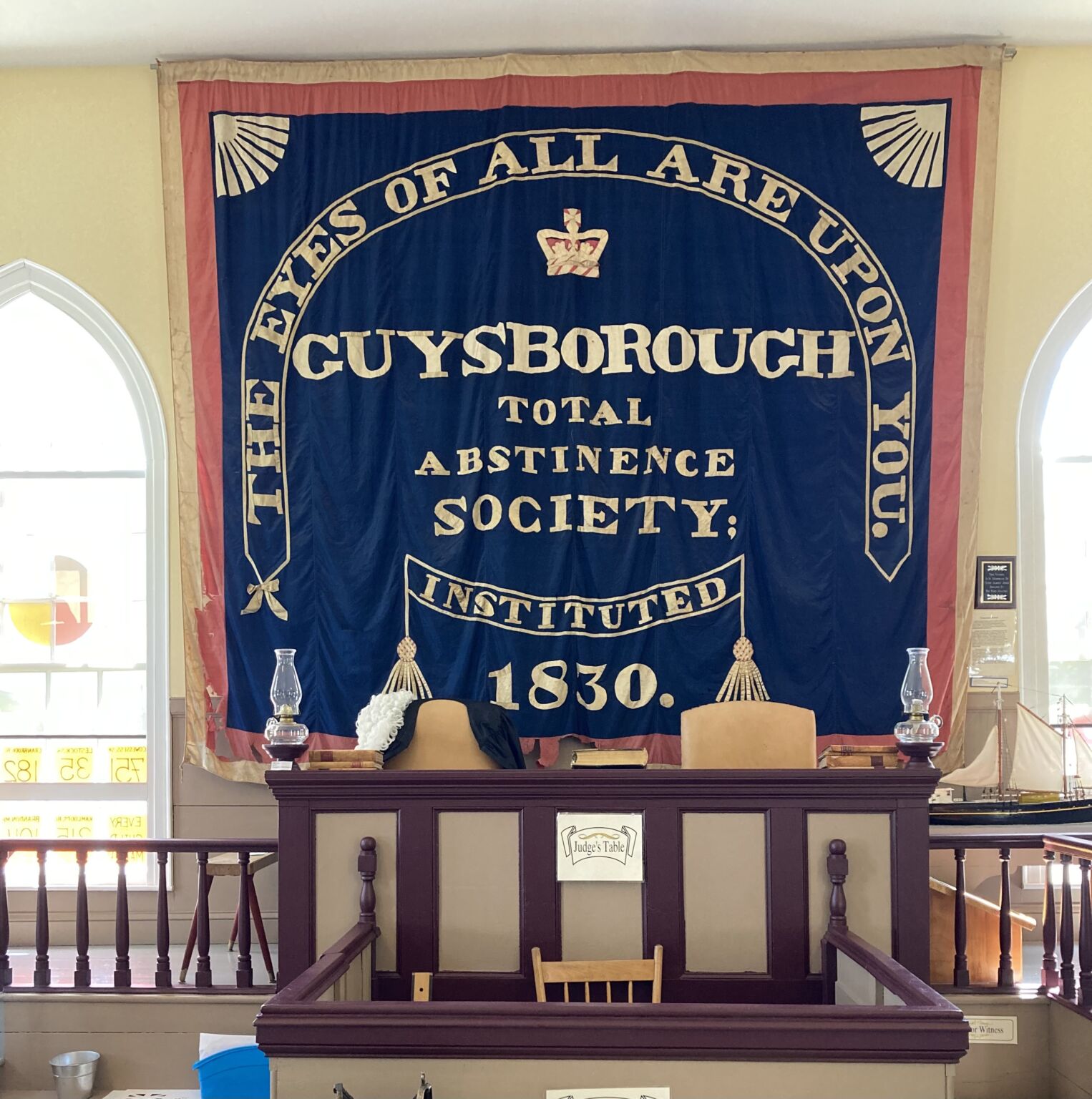 Across the street is the Wesley United Church covered with practical white vinyl siding. Remarkably, the wooden pinnacles on the tower have not been removed and hint at the quality of details that had probably existed before the siding. Those little bumps on the pinnacles are called crockets, a useful term to be able to casually toss off when you are walking past the crocket-rich St. Mary’s Basilica on Spring Garden Road in Halifax. 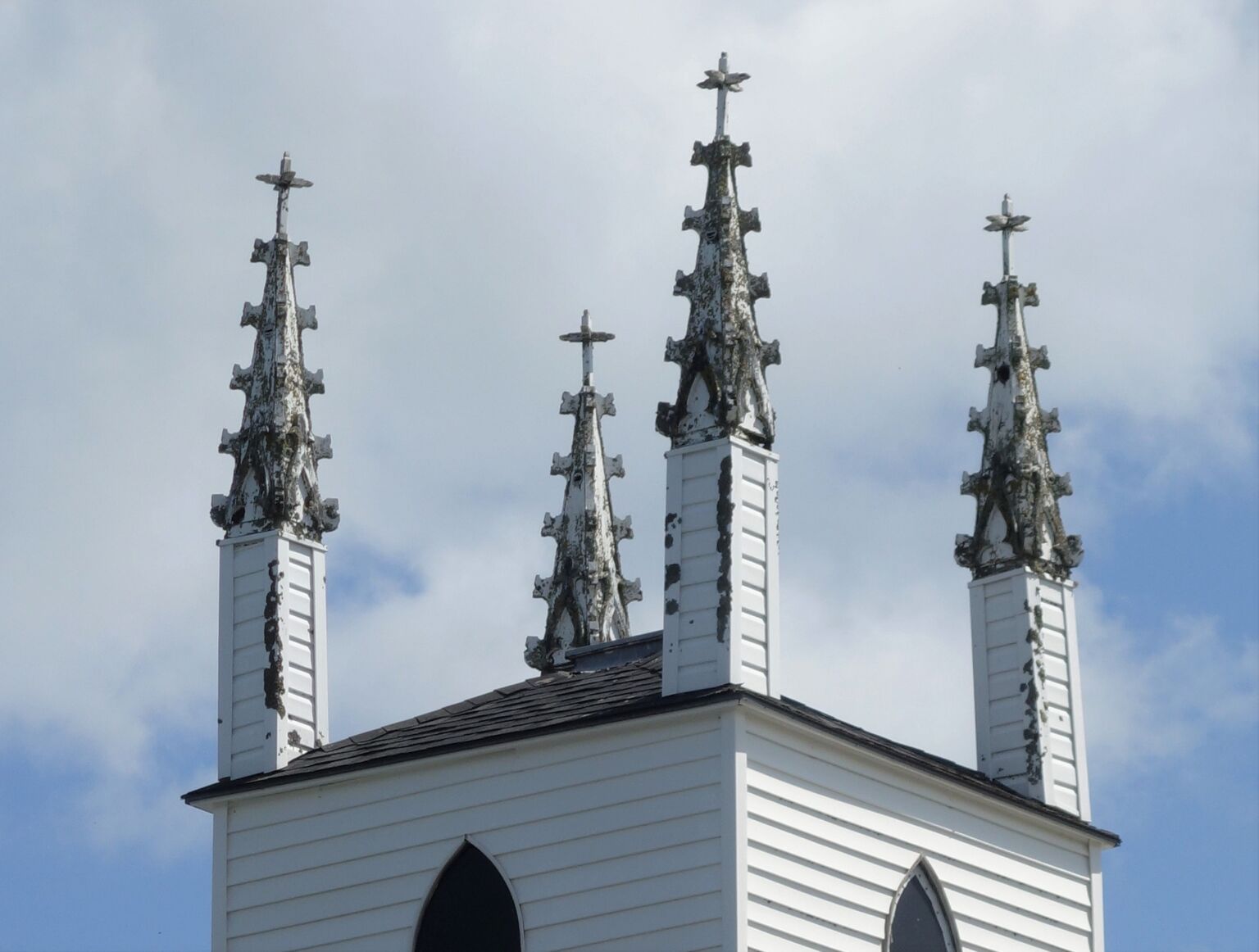 A highlight of the drive along Chedabucto Bay is the view of Queensport Lighthouse on tiny Rook Island. The Department of Transport decommissioned the light in 1979. Wisely the municipality took over maintenance of the building, because it is a regional icon and a thing of beauty. Made us stop.

Canso has been our destination in the past, but we skipped it this time and crossed directly to the Atlantic coast. The drive out Whitehead was a first for us. A couple of houses made us stop long enough to snap a picture out the window of the car. This centre gable gothic house with the open storm door is quite perfect. 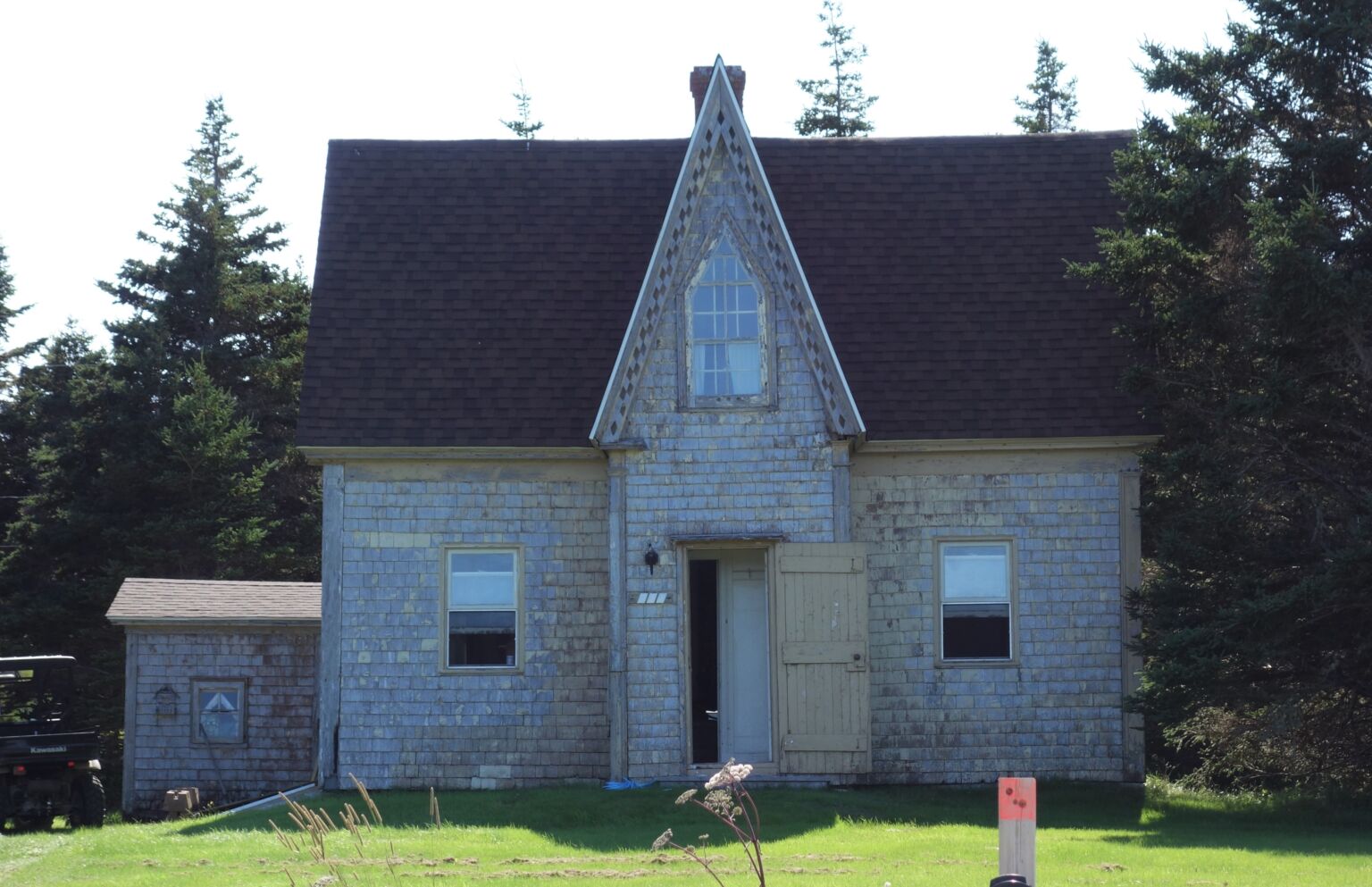 That decoration in the gable is an unusual pattern. 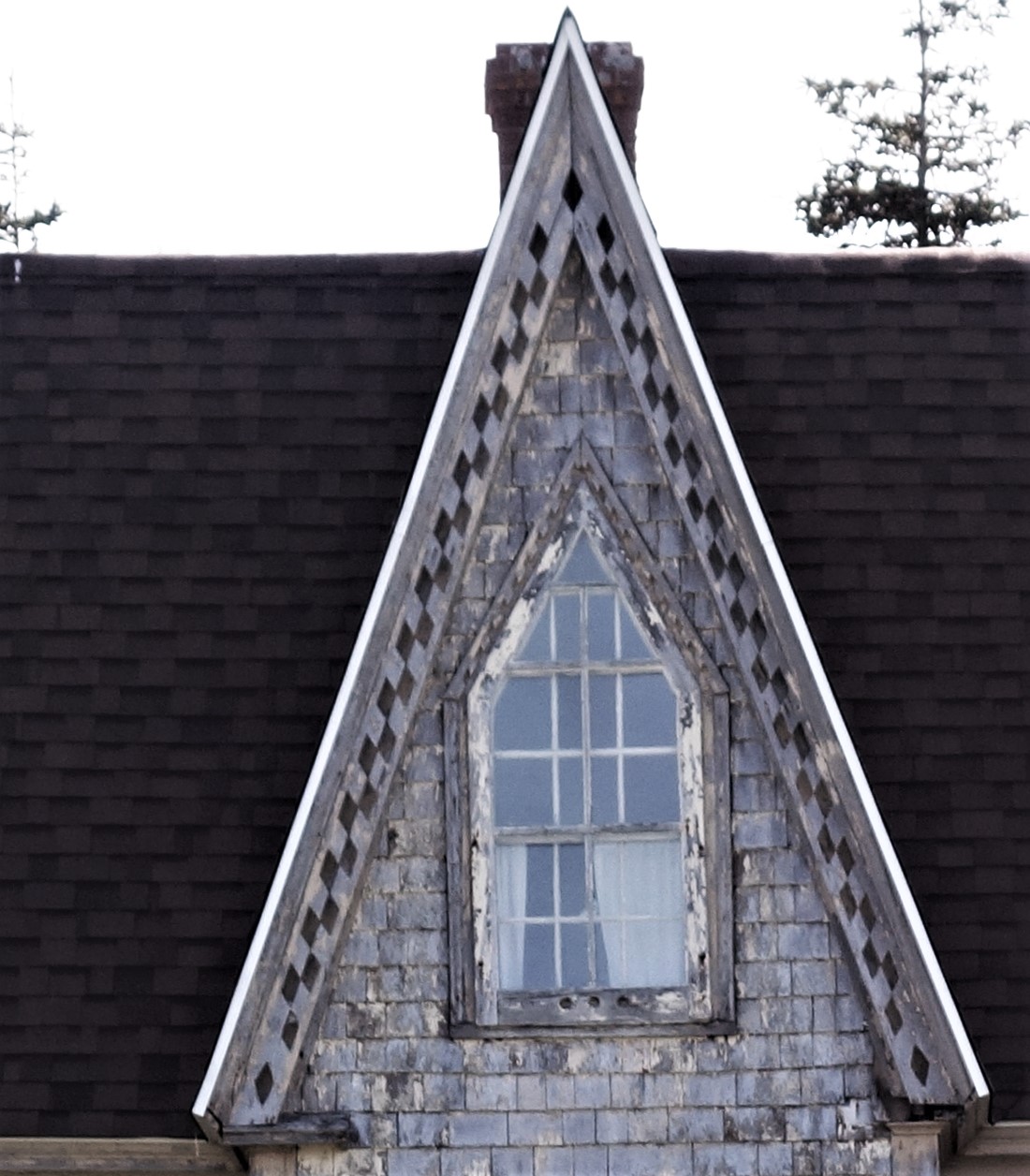 Many of the headland roads on the Eastern shore are dead ends, which means you can plan what to photograph on the return trip. It was a beautiful day, and this pink and grey house begged to be remembered. 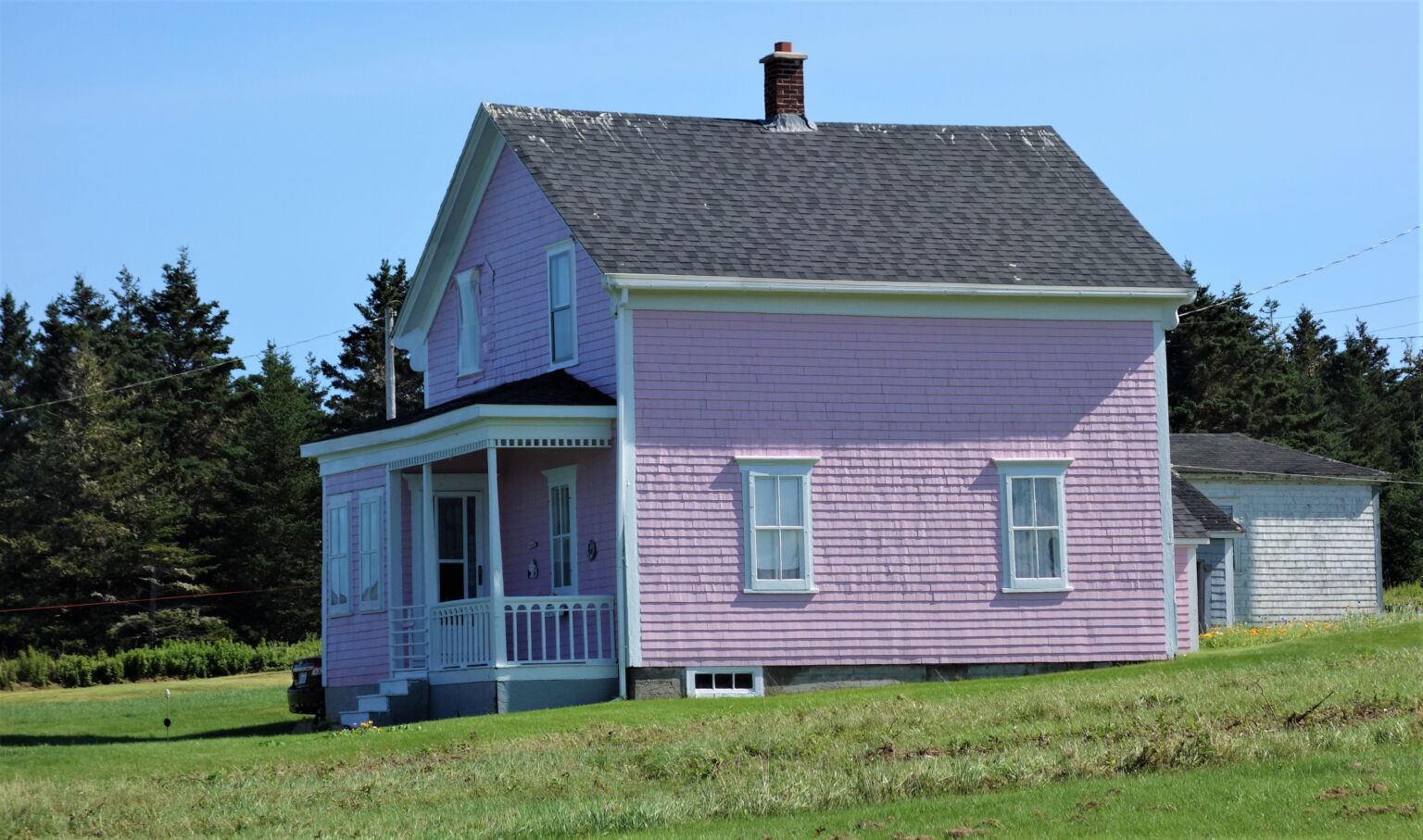 When we started out onto Whitehead, there was a construction project happening around a small bridge. It appeared we were crossing over a narrow rock-lined canal that connected the coves on either side of the headland. When travel writer Clara Dennis visited in the 1930s, she took a picture of this passage that allowed fishermen to take their vessels from cove to cove, avoiding a long trip around the headland.

I had forgotten about  the Acadian heritage of this section of the coast, and since our last visit there are new cultural expressions that can’t be missed. Port Felix offered a ship-shaped platform festooned with Acadian flags. This is Place Savalette, that celebrates a Basque fishing captain who started visiting this area in the 1560s and returned for decades. Captain Savalette was new to me, but he appears to have been quite a guy. 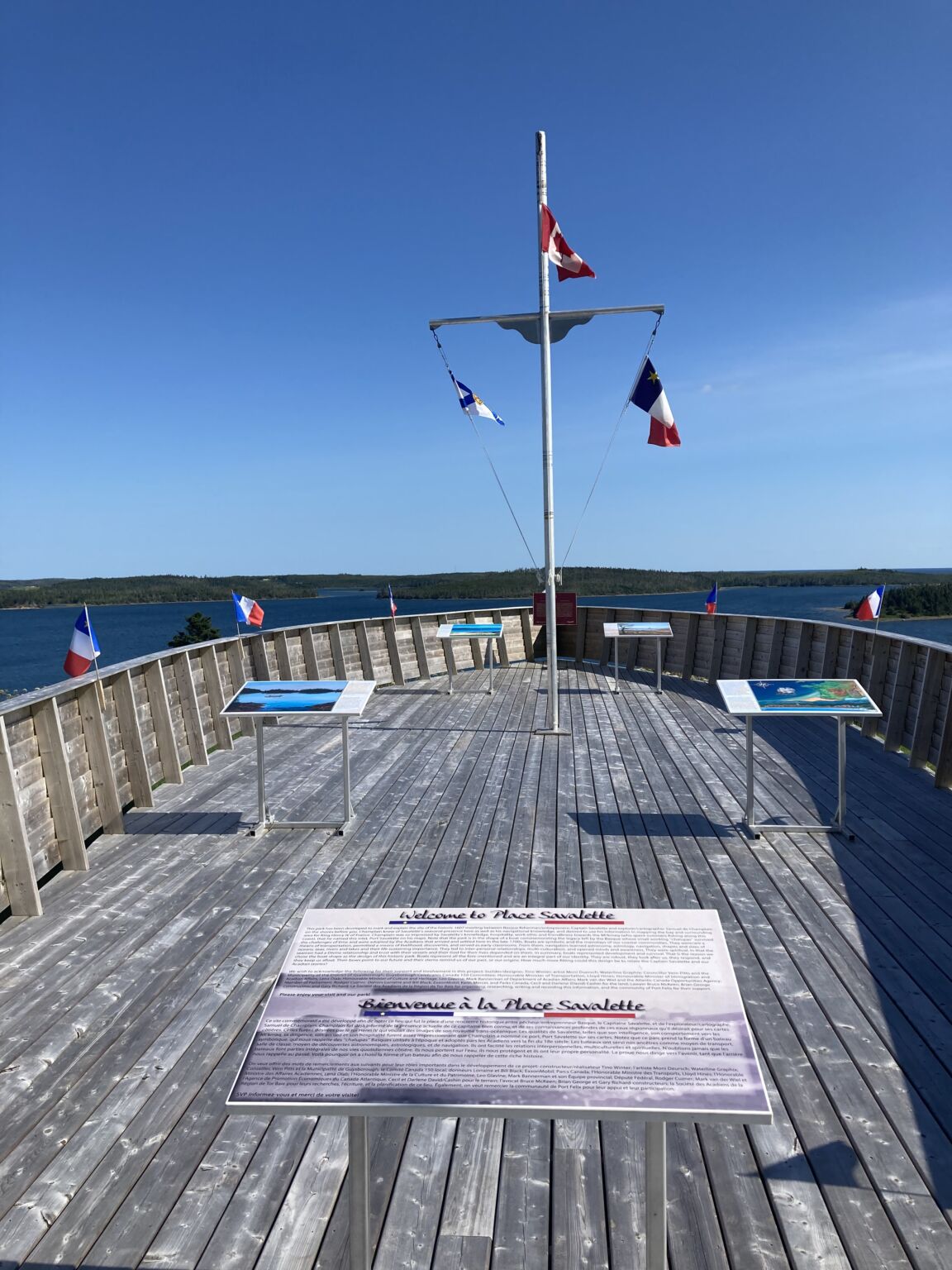 The “ship” afforded a grand view of the Sugar Harbour Islands, that were declared a protected area just this spring. We’ll see how that works out. 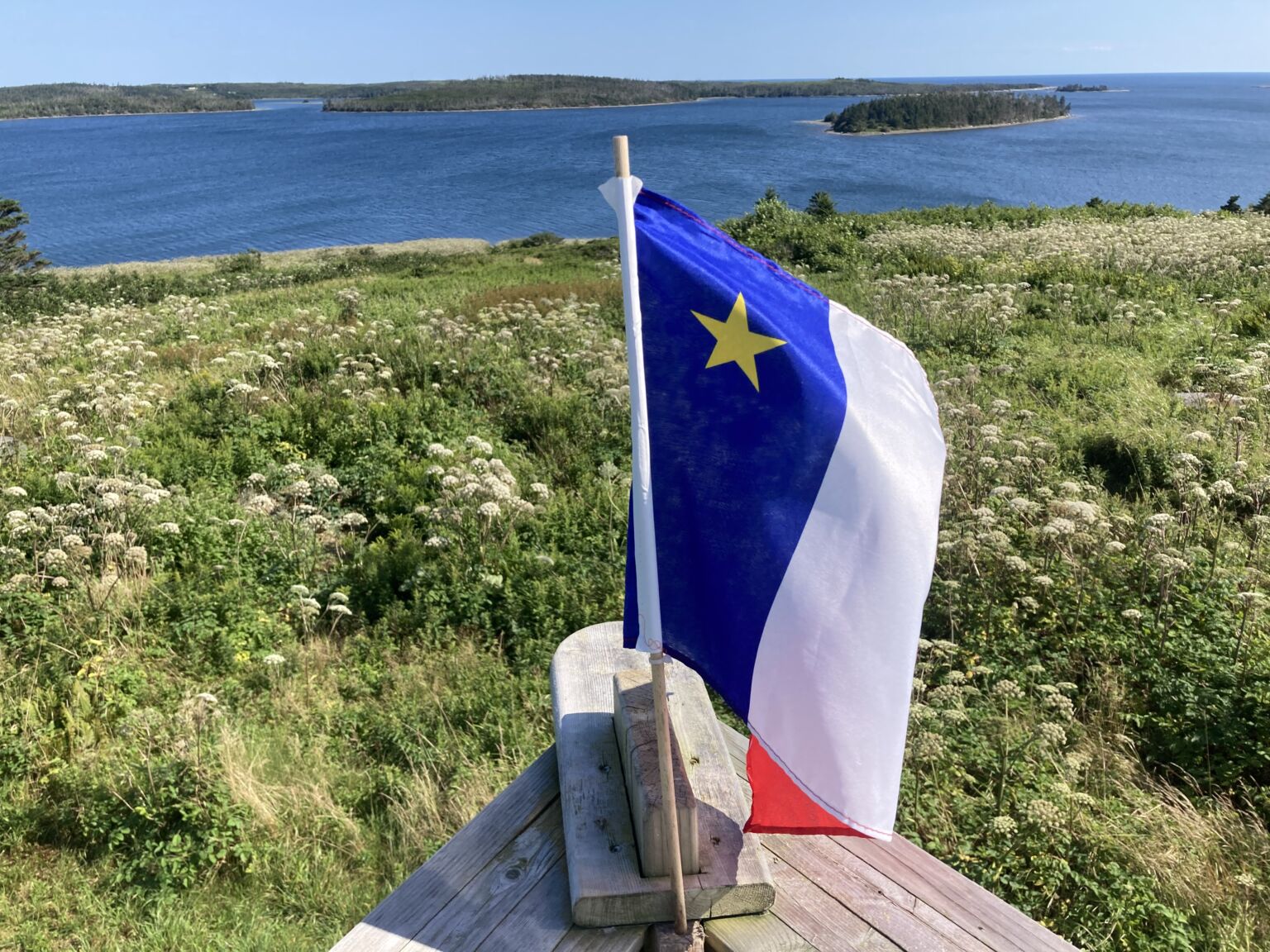 Next to the church in Port Felix was a very Quebec-looking house that might have been the priest’s residence. 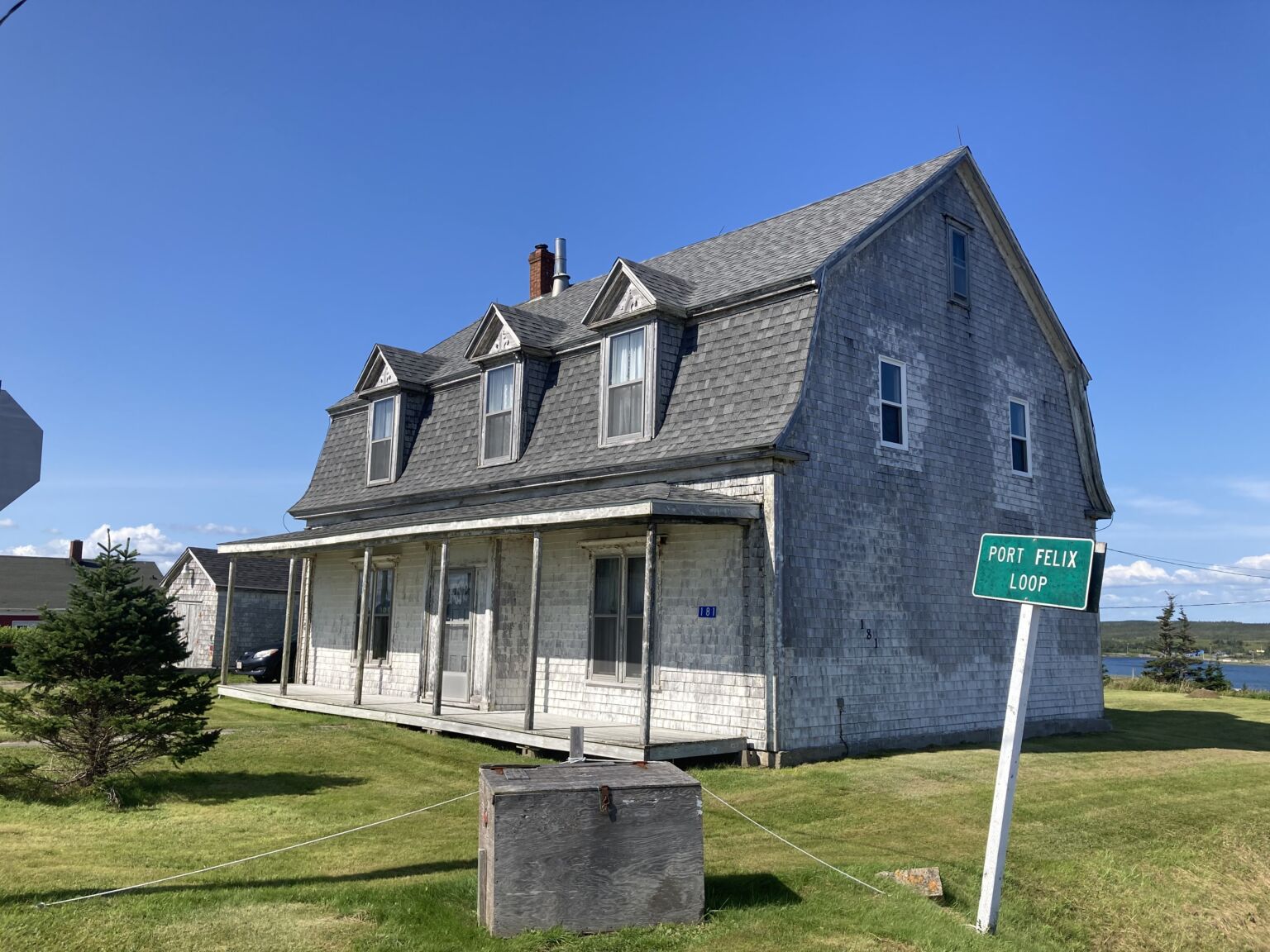 The dormers had fleur-de-lis on their pediments. 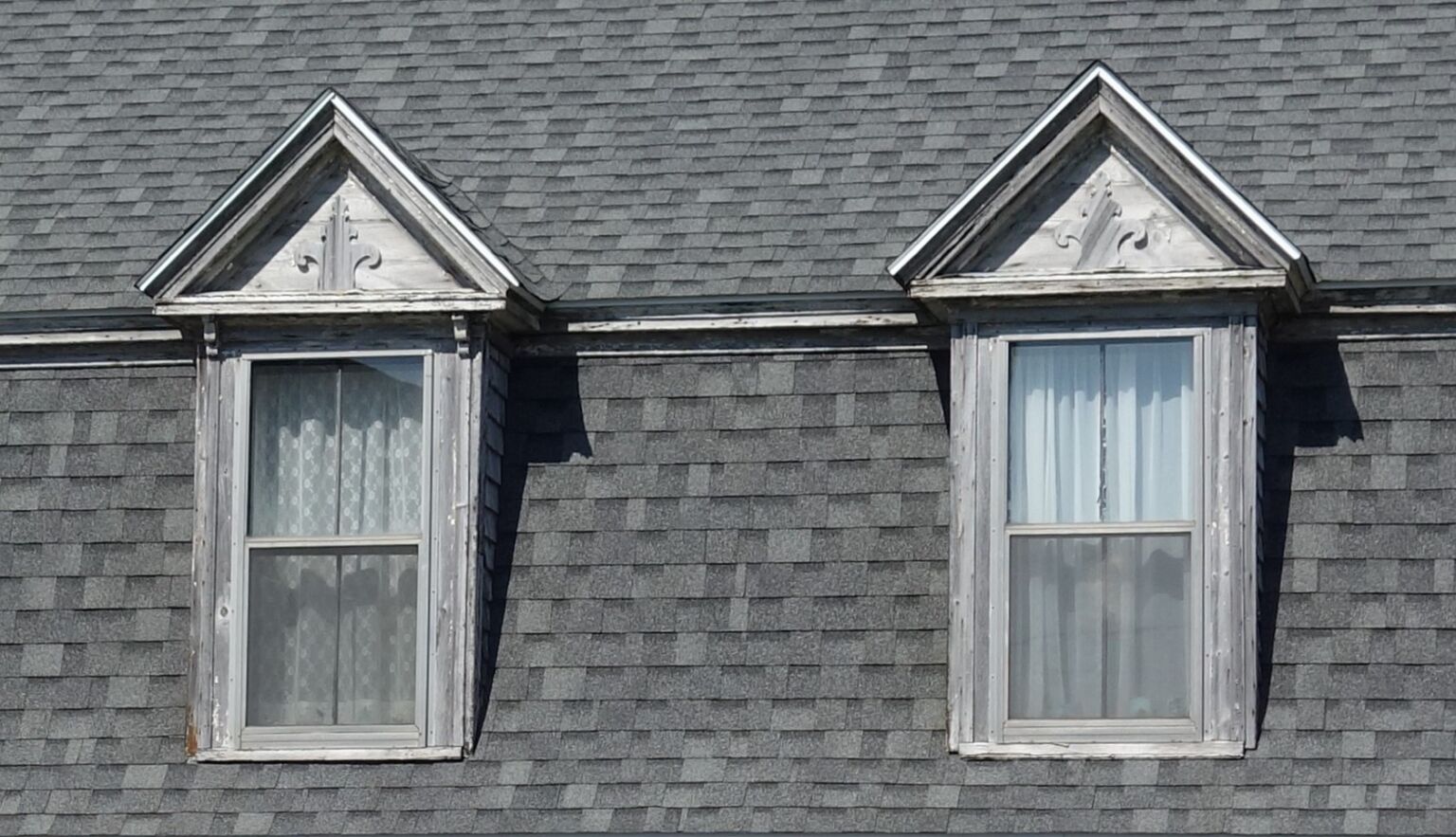 We ended our day comfortably housed and well fed in Charlos Cove. And feeling pleased with the day, because years ago we did this drive in fog so thick that nothing was seen. It was also our first time travelling in this direction, which felt good. 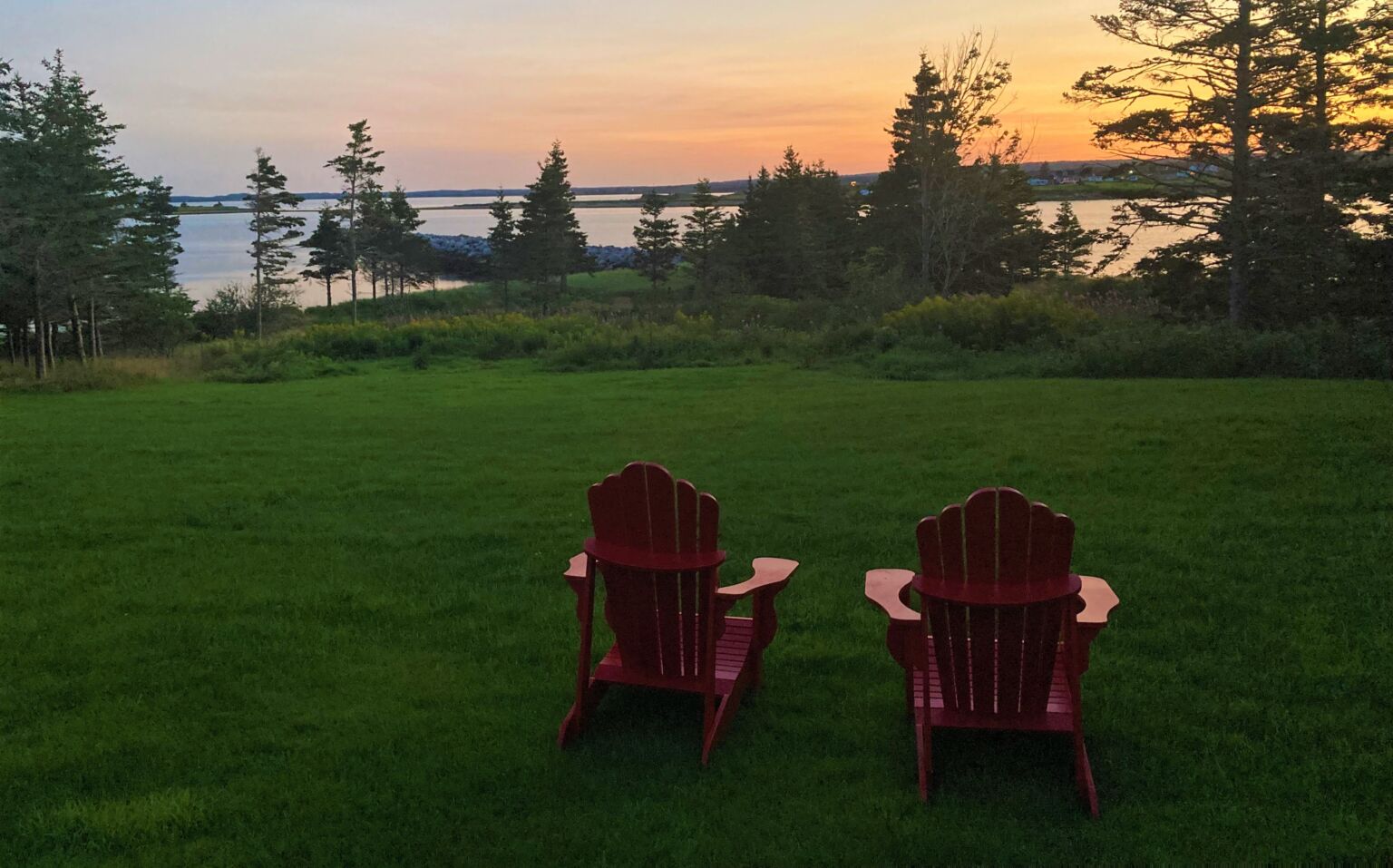 There will be a second post with more adventures from this trip.