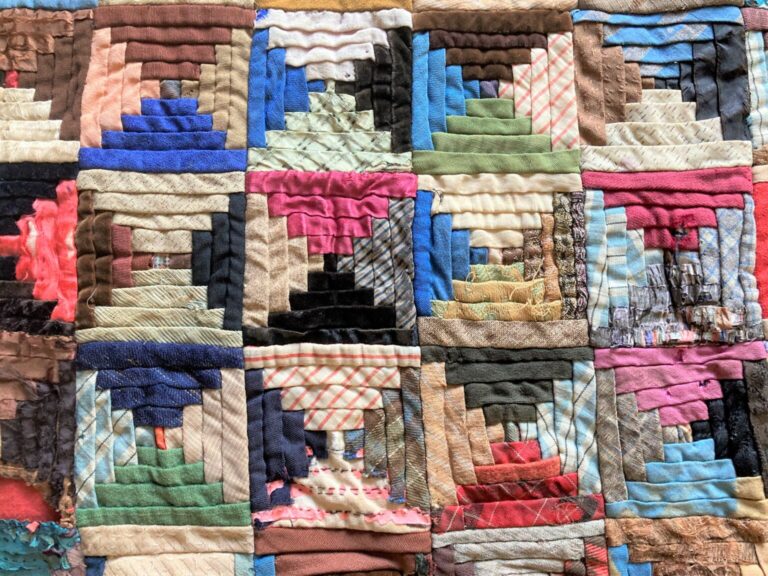 These days our mantra is “have more fun getting rid of stuff.” It takes quite a bit of effort to do this well.

Last month we said good bye to two quilts that have been in my family for about 160 years. These are not something that just “belonged to” an ancestor, these are things my great great grandmother made. 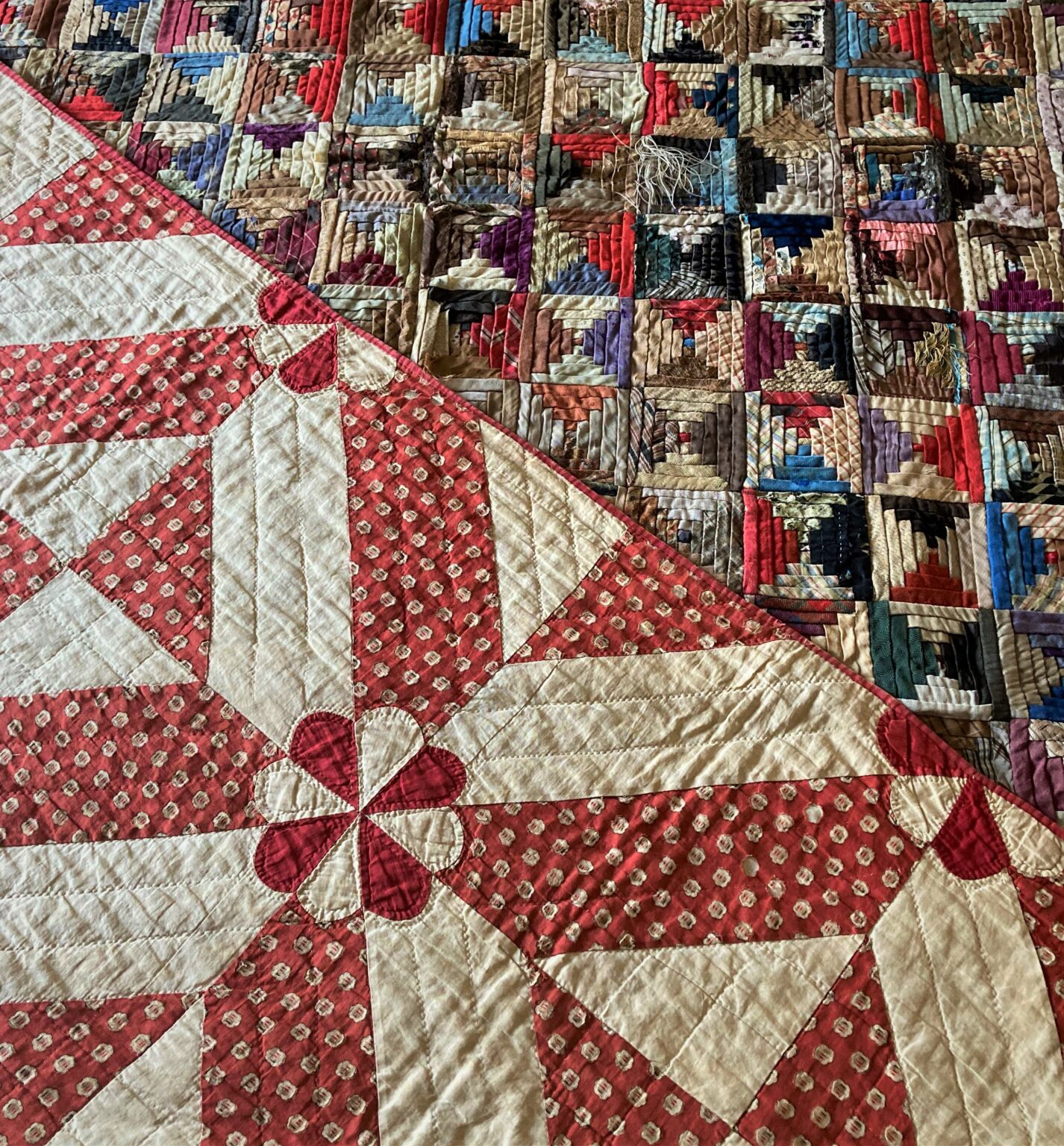 Her name was Mary Bailey, born 1816 and died 1894 on Brier Island, at the very end of Digby Neck. Westport was her home; where her father was a merchant and shipbuilder and her husband, Daniel Bailey, was a builder and wood worker. The community looked like this, with the Bailey home just off screen to the left. In my lifetime her quilts were never used and spent their days relaxing in cupboards, out of sight and generally out of mind. 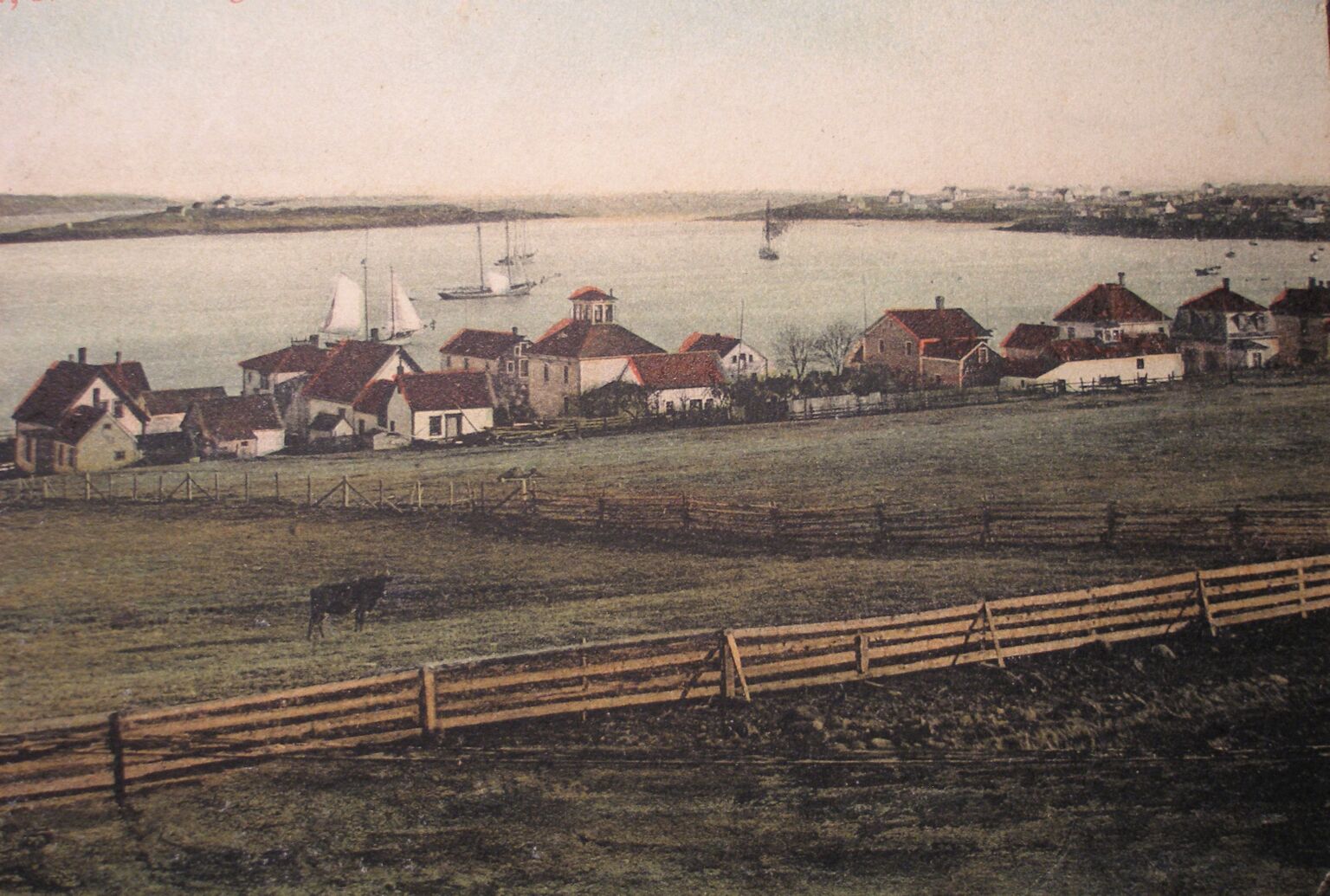 When I started working for the Nova Scotia Museum in 1972, a revival of quilt enthusiasm was underway. The museum and Sherbrooke Village, where I started my museum career, were centers of research, training, and collecting, so I was exposed to quilt talk and had access to quilt lore. Mary’s quilts were good examples of the craft.

The first quilt is an eye-popping design that feels very fresh. I once thought that old quilts were assembled from scraps of fabric that perhaps had a previous life, but this was not universally true. The fabrics used in this red and white quilt were probably acquired just for that project. The design is a variation of a pattern known by the memorable name “hearts and gizzards.” Scott Robson, the curator at the museum who embraced the study of quilts, was excited when I showed him this quilt because the pattern was put together in a way he had never seen before. 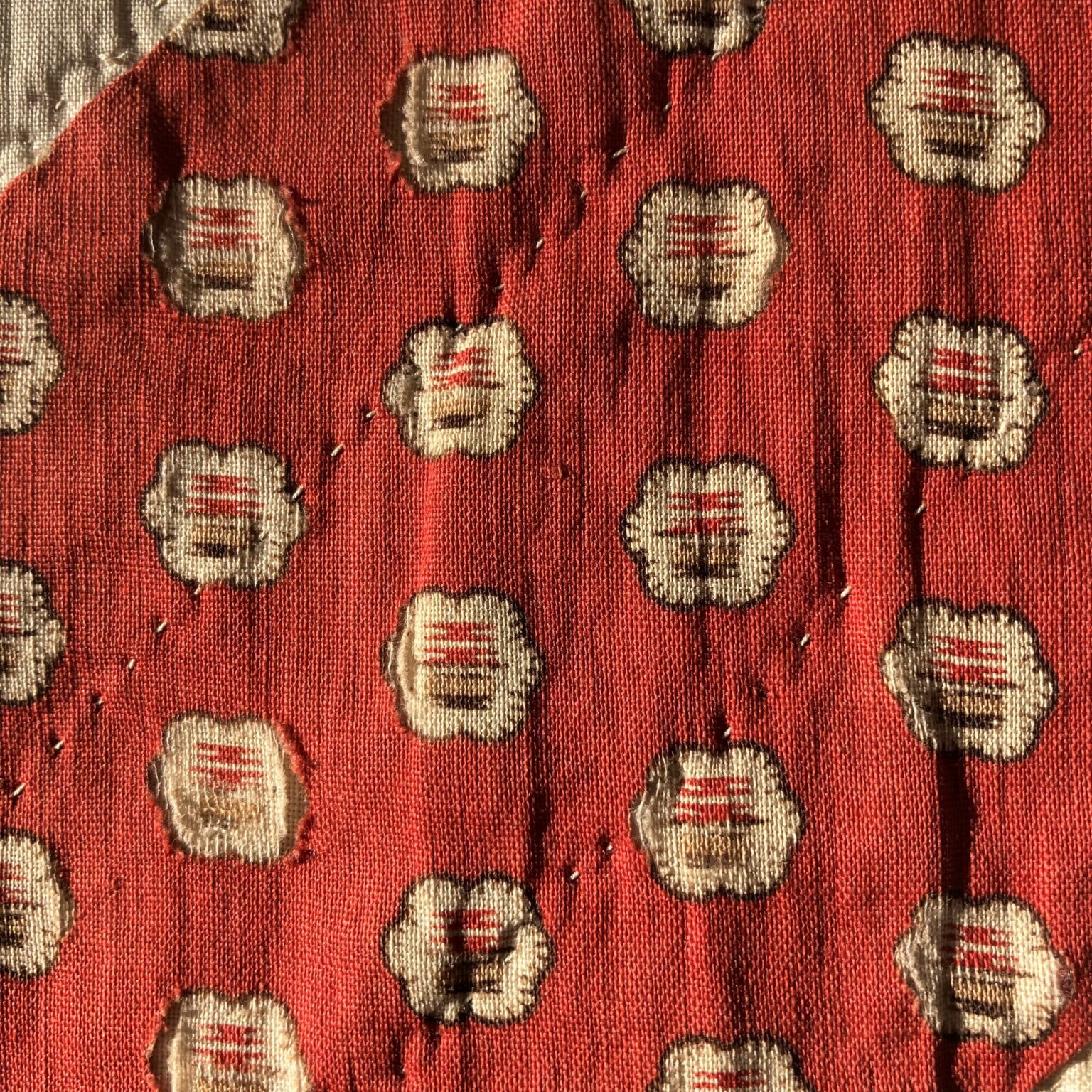 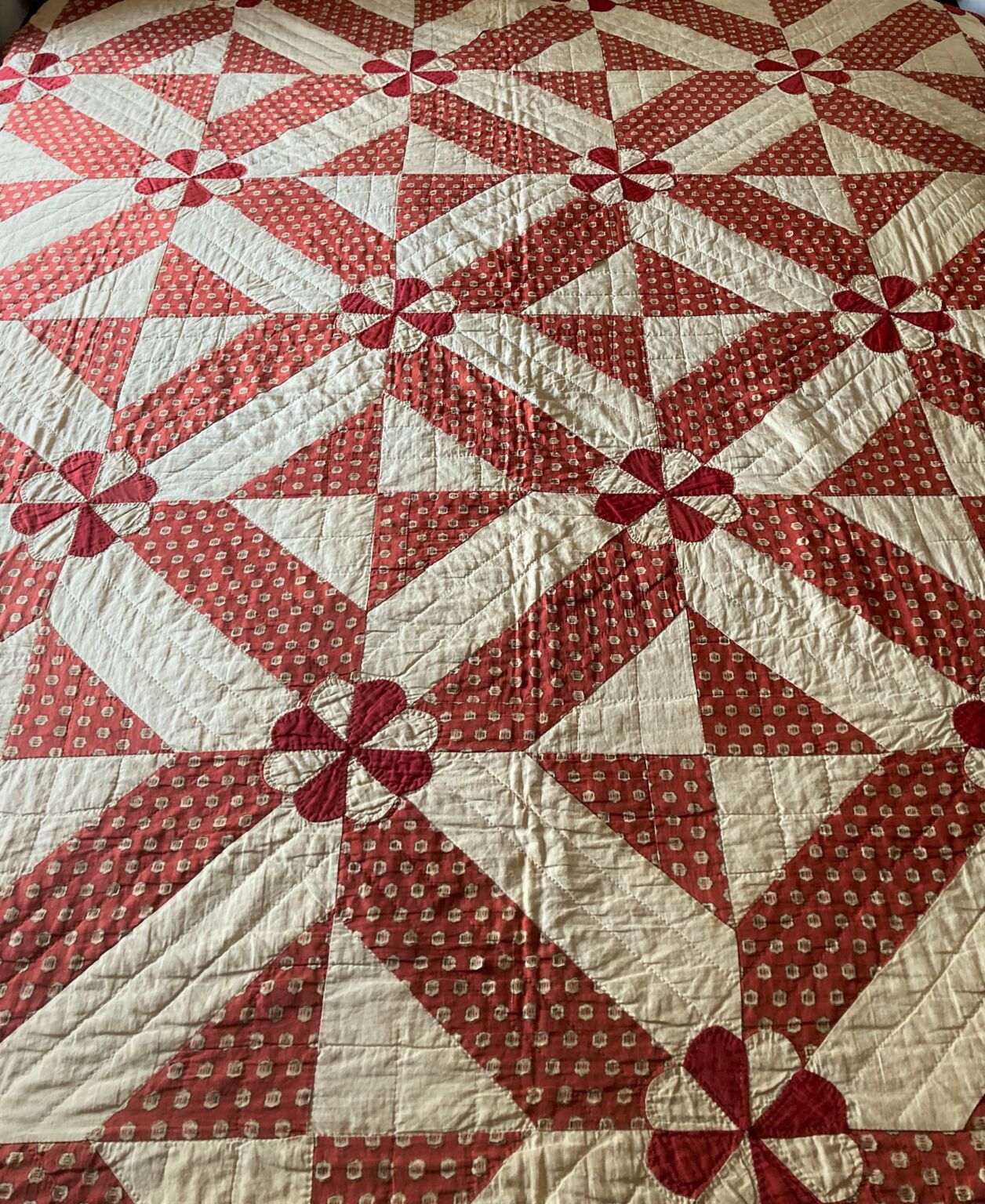 When doing research in the early 1990s for a museum quilt exhibition and publication, Scott and Sharon MacDonald discovered an illustration of this pattern variation in an 1857 edition of Godey’s Lady Book, the most influential woman’s magazine of the day. Suddenly I realized that Mary, my ancestor, did not make a piece of folk art; she created something stylish and of that moment, the equivalent of interpreting a pattern from Martha Stewart’s magazine in her heyday, 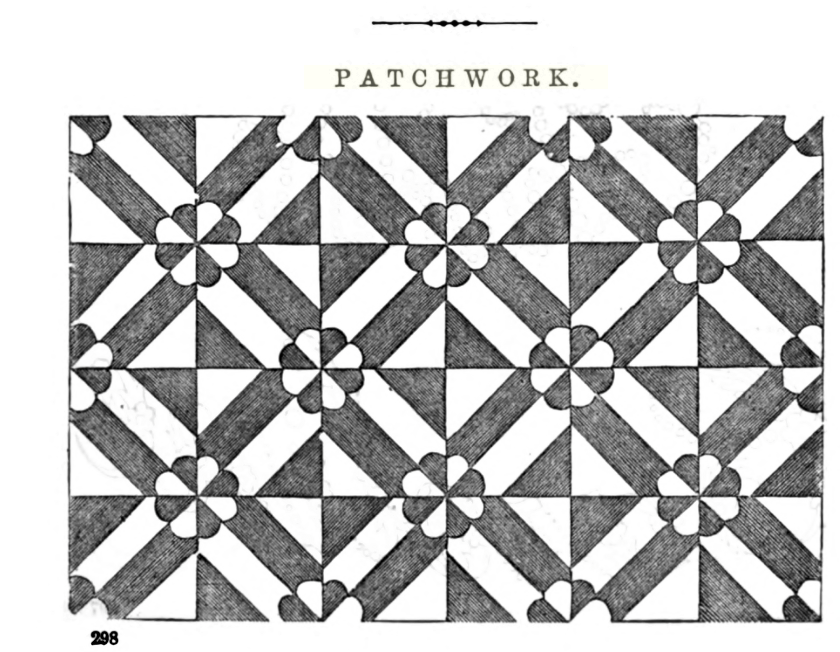 The other quilt is a pattern called courthouse steps (similar to a log cabin design, but quilters know the difference). In contrast to the red and white quilt, this uses so many different fabrics I did not even attempt to count them. 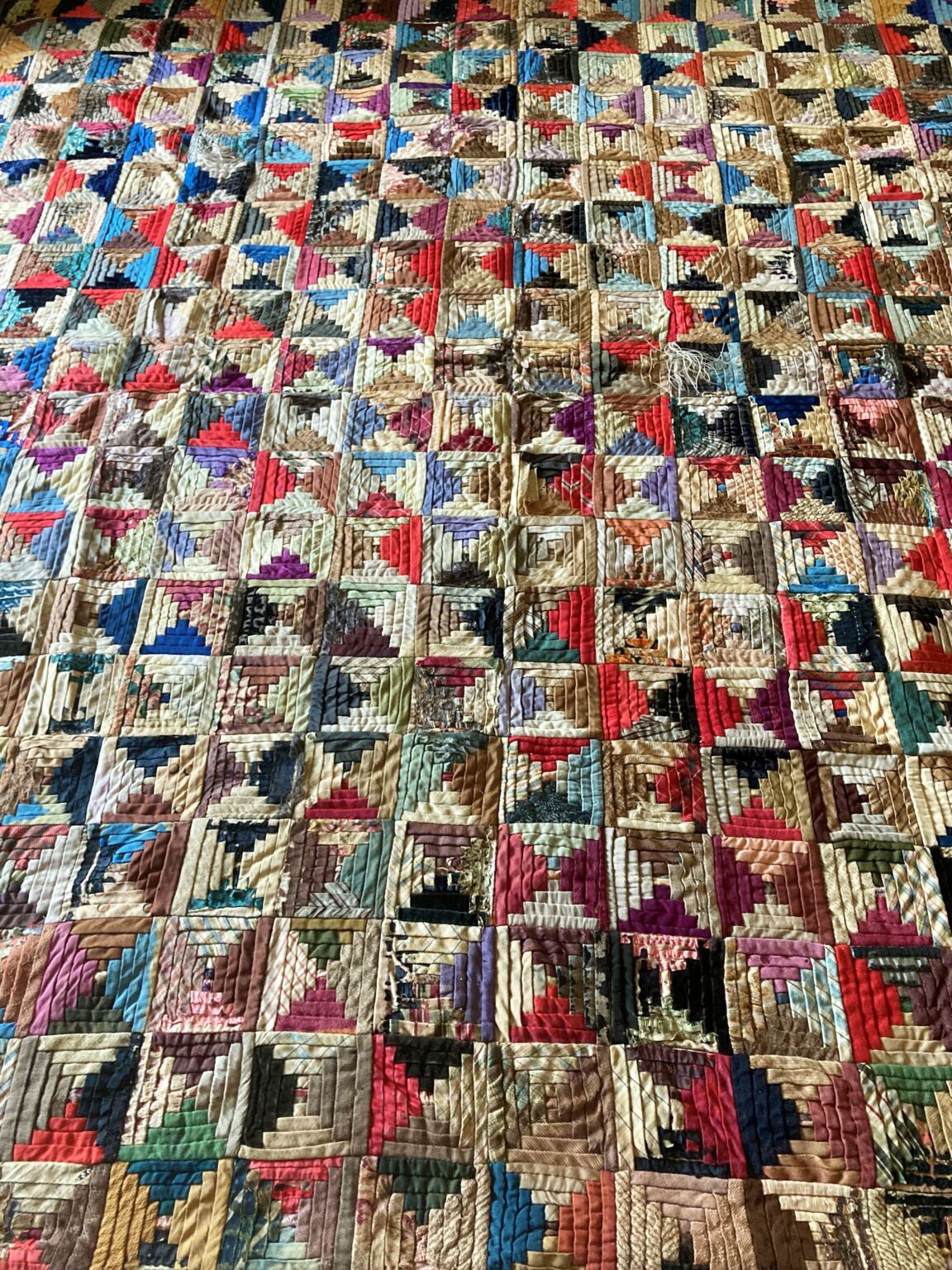 As part of the long goodbye we showed the quilts to our friend Polly Greene, the doyenne of quilting in Nova Scotia. She was quite definite (as she usually is) that this quilt would have been made by one person (not a sewing circle), and estimated that a single square could be assembled in an afternoon. There are 378 squares and over 6000 individual pieces of fabric in the piece. This object is a statement about available time, and a record of countless decisions. Such a quilt was probably not made for a bed but would have glowed in a parlour, along with other treasured objects. 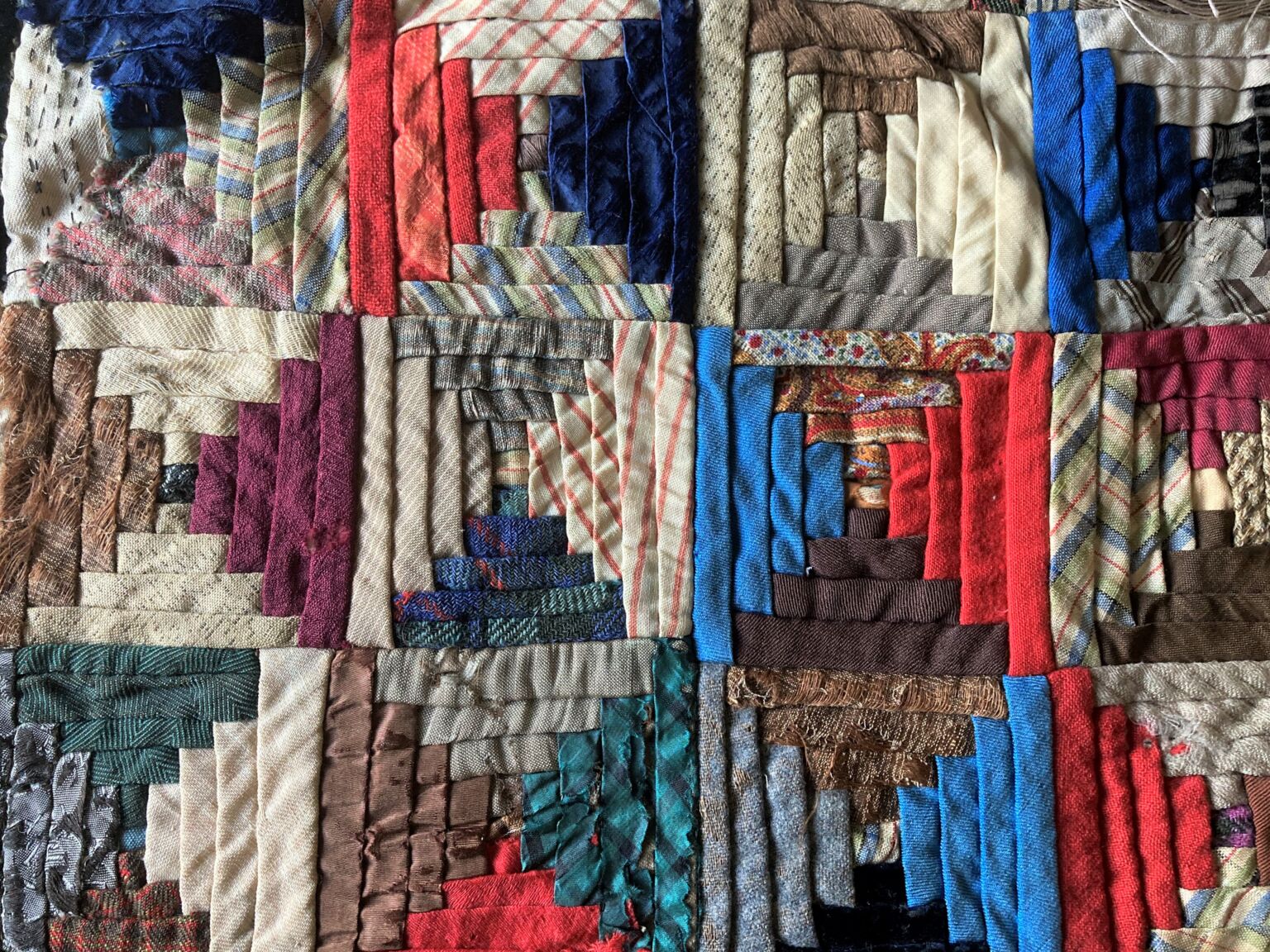 My grandmother, Mary Davis (1867 -1949), spent extended periods of her childhood in her grandmother’s home, with these quilts I assume. In this photo my grandmother wears a dress made of plaid fabric similar to some of the courthouse steps. 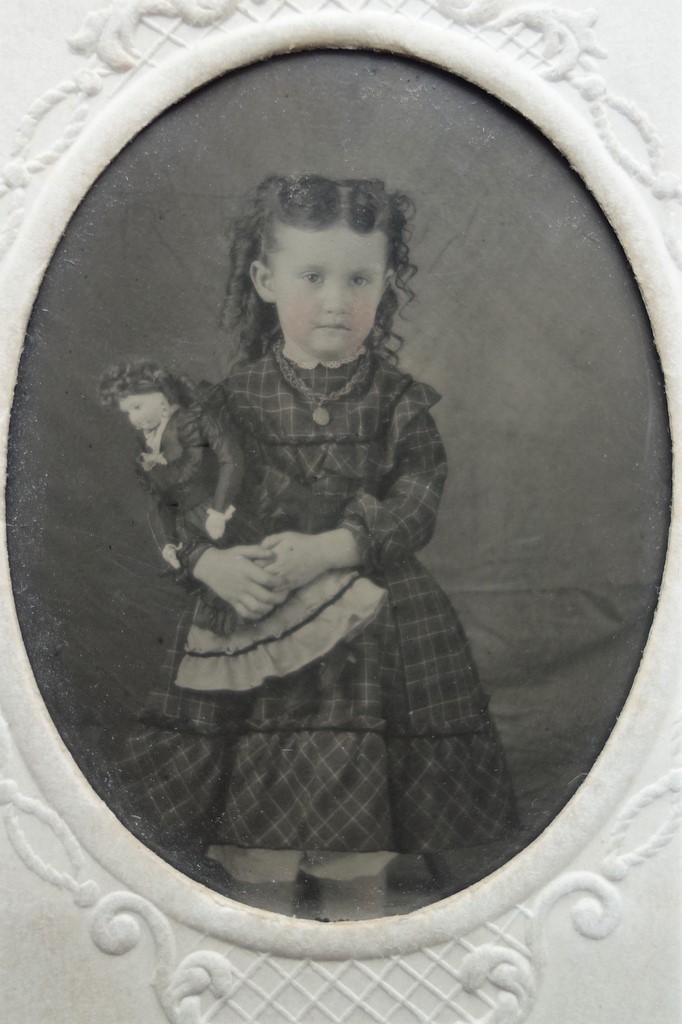 Mary holds Luella, the doll brought by her seafaring parents, who she barely remembered. For the next few years Mary would live on her father’s vessel as it carried cargo back and forth across the Atlantic.

In 1894 Mary was caring for her ill grandmother when she met the young doctor she would marry. The quilts moved with them to Bridgetown when Dr. Melbourne Armstrong began his practice there, and eventually the quilts travelled to Halifax with my mother.

During the winter Sheila put some effort into securing an appropriate new home for the quilts. It felt like their story would have most meaning on the islands where they were created, and the museum of the Islands Historical Society in Freeport on Long Island agreed to take over their care.

The hand off was arranged in August. When we arrived on Brier Island our first stop was the cemetery to visit Mary and Daniel Bailey’s grave. It felt appropriate for Mary to spend another moment with her handiwork. The quilts seemed to brighten under the threatening clouds of a gathering storm. 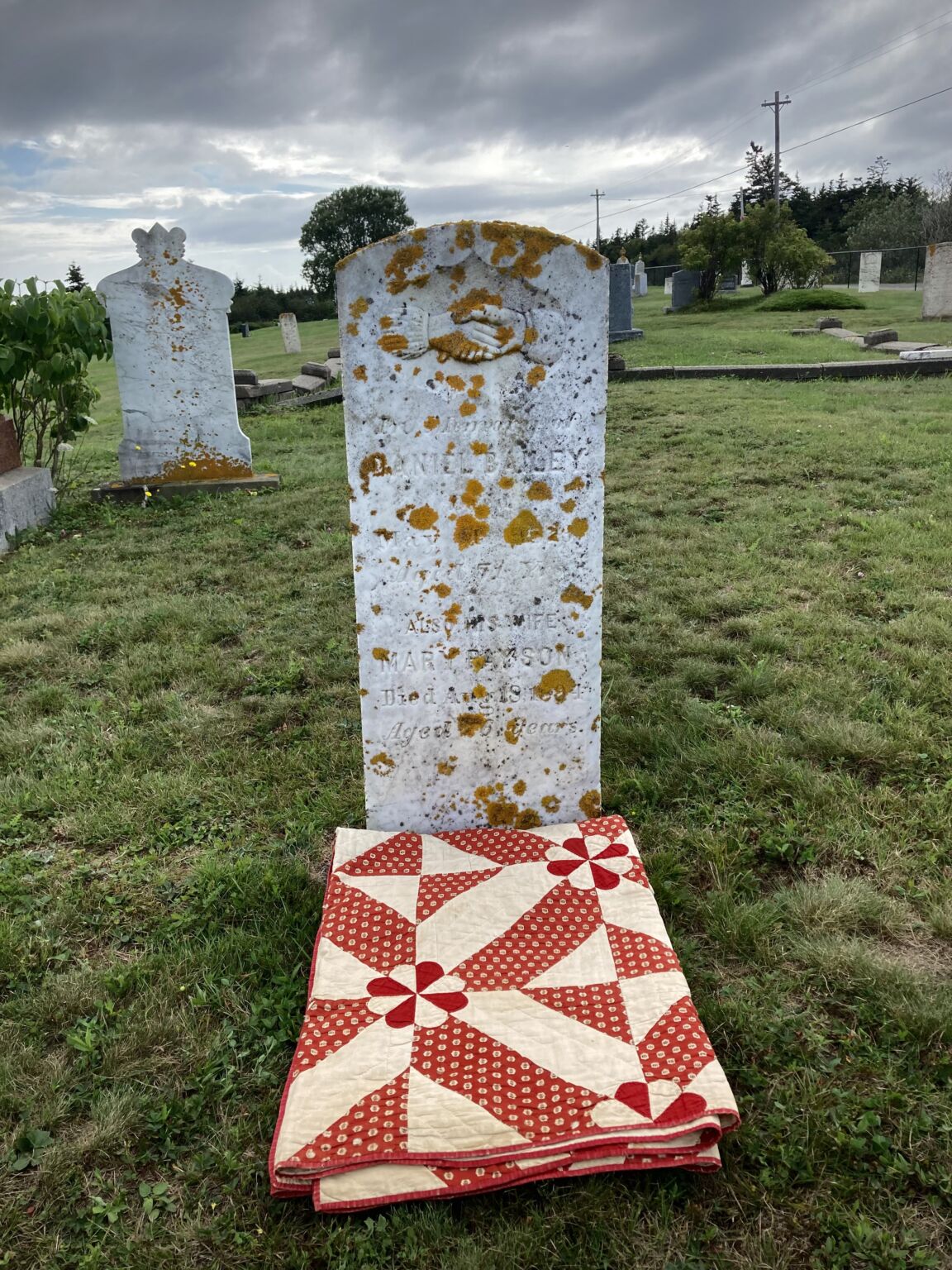 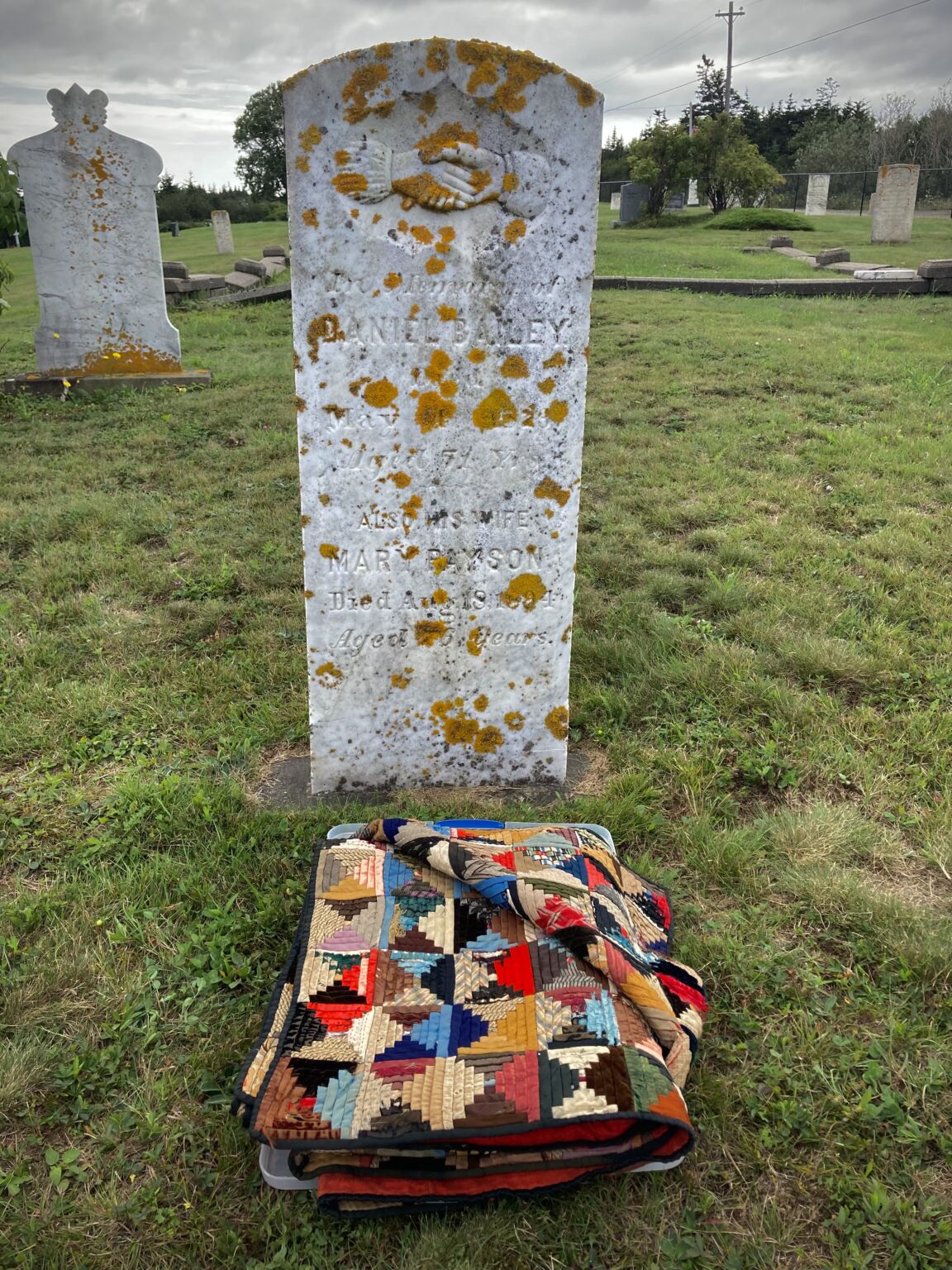 My cousin Ralph Davis and his wife Cara met us on Brier. The next morning Ralph and I posed for a photo in front of the house that our great great grandfather Daniel Bailey had built for his family and where his wife Mary had assembled the quilts. The charming house has been exquisitely restored. 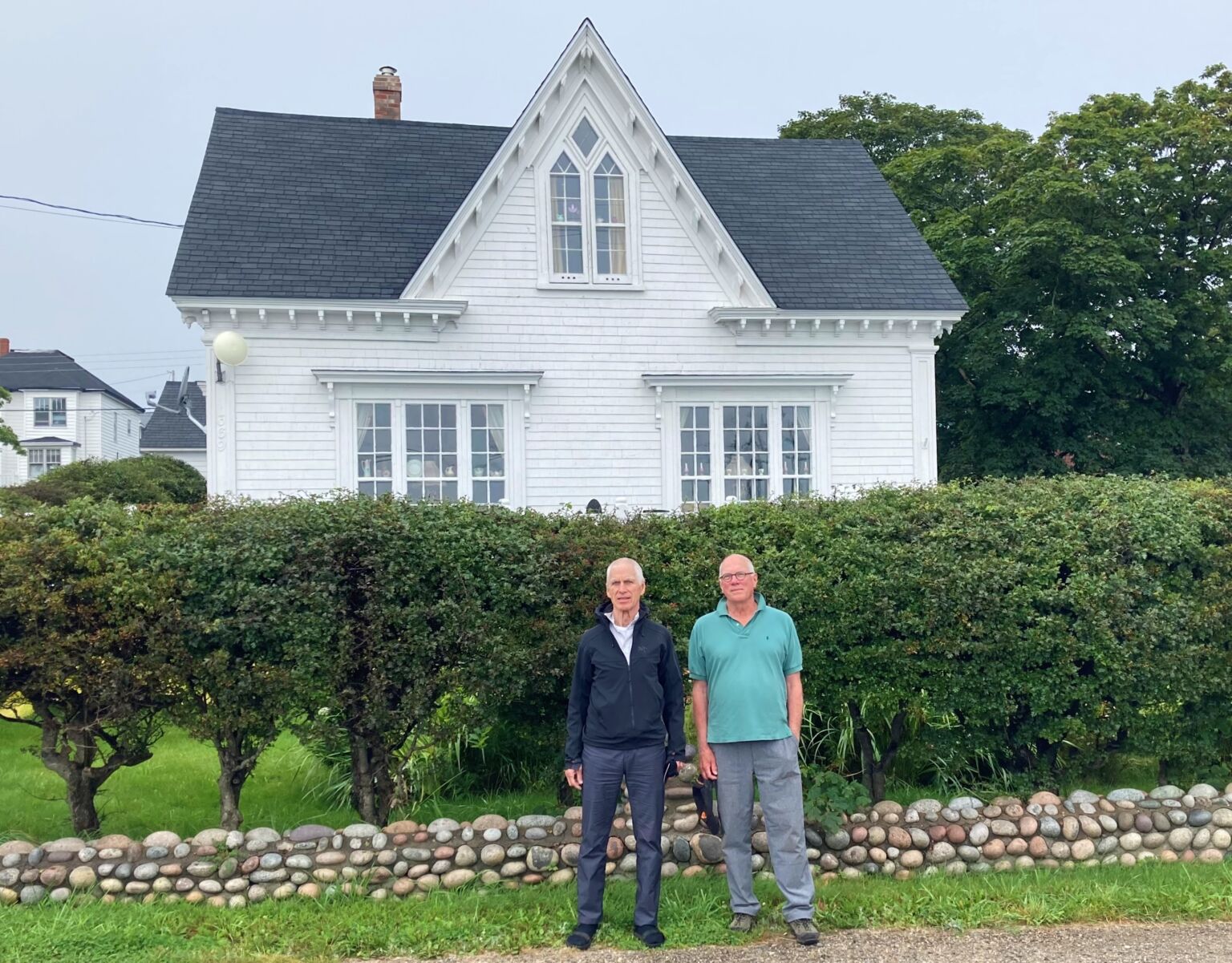 That afternoon we delivered the quilts to their new home. Here they are meeting other island quilts in the museum’s collection and breathing the island air again, for the first time in a hundred years or so. 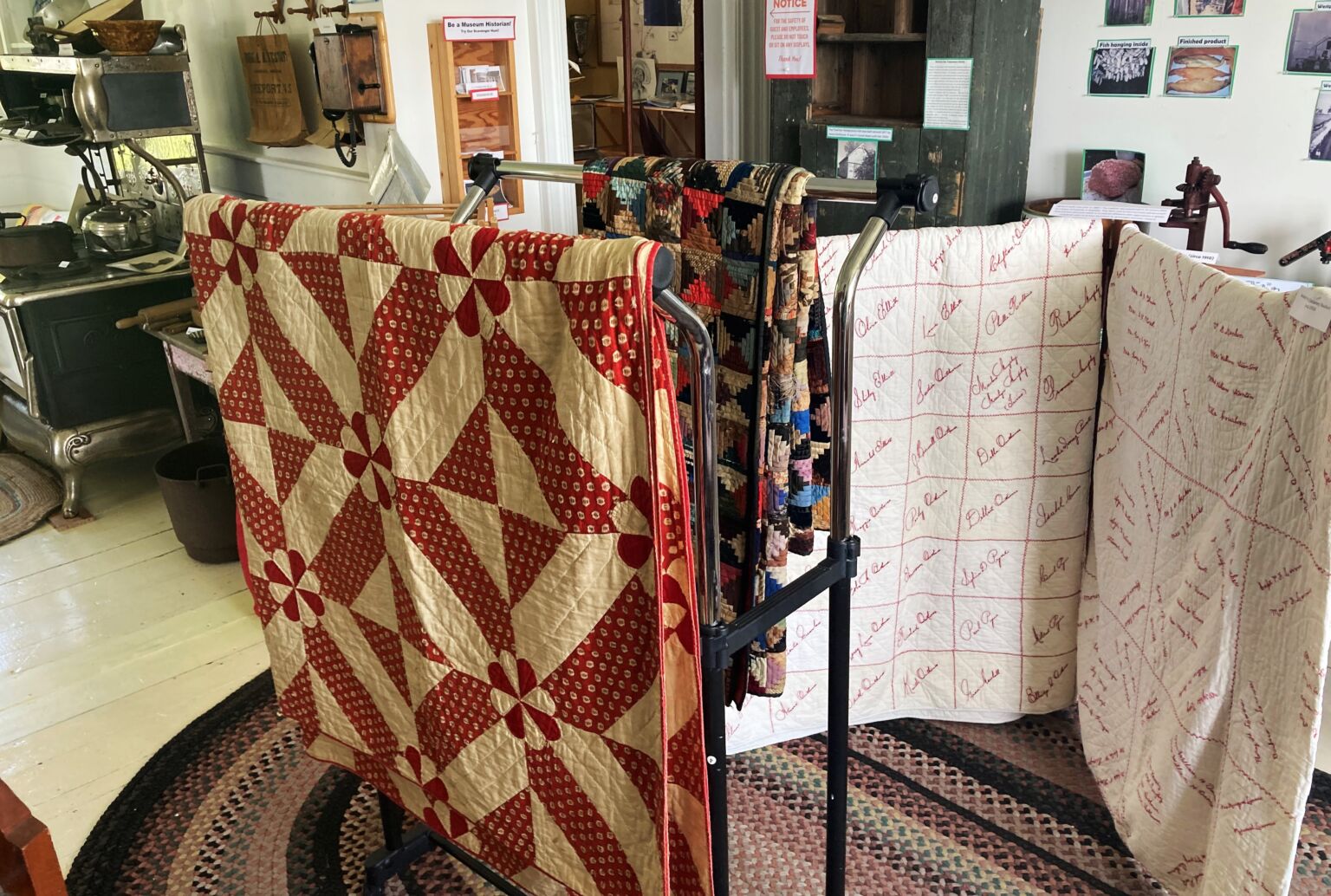 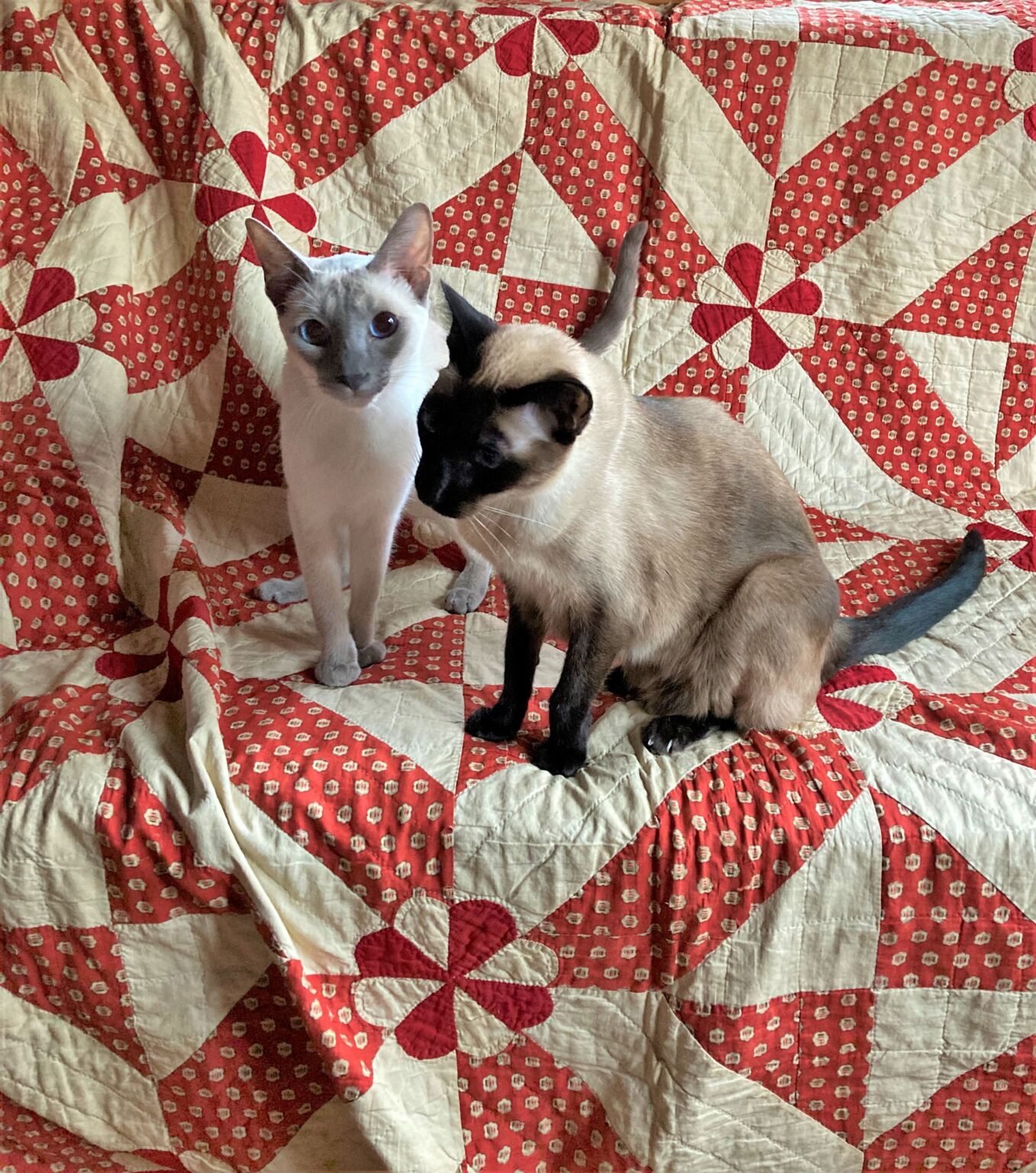 Similarly I know Daniel through several pieces of furniture he made and the family home he built. You can imagine my thrill when Dorothy Outhouse, the archivist at the Historical Society, offered to show us inside the Baptist church in Freeport that Daniel built in 1851. Such a special treat to stand in the beautifully preserved interior of the church trying to pick up a vibration from my great great grandfather. 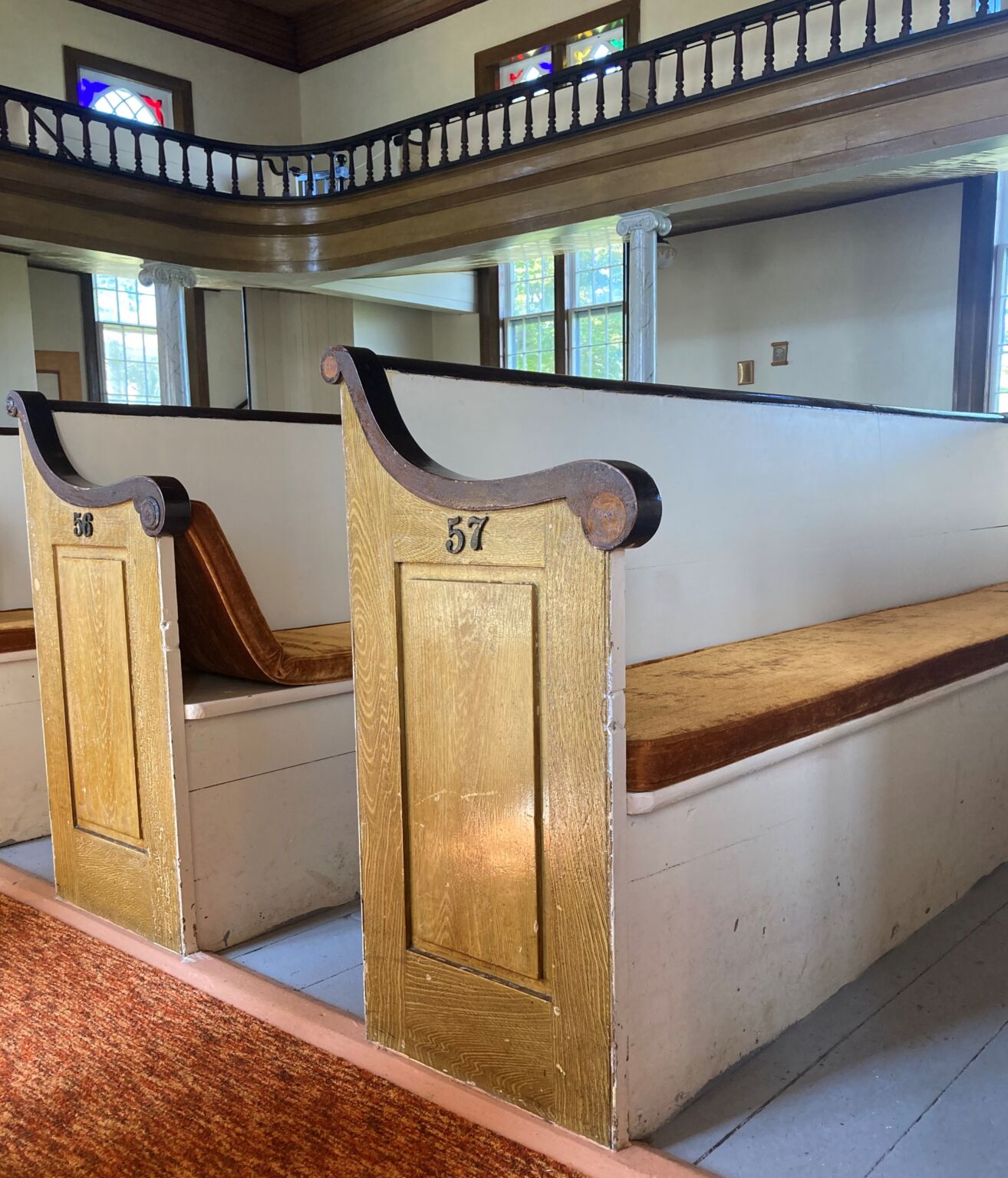 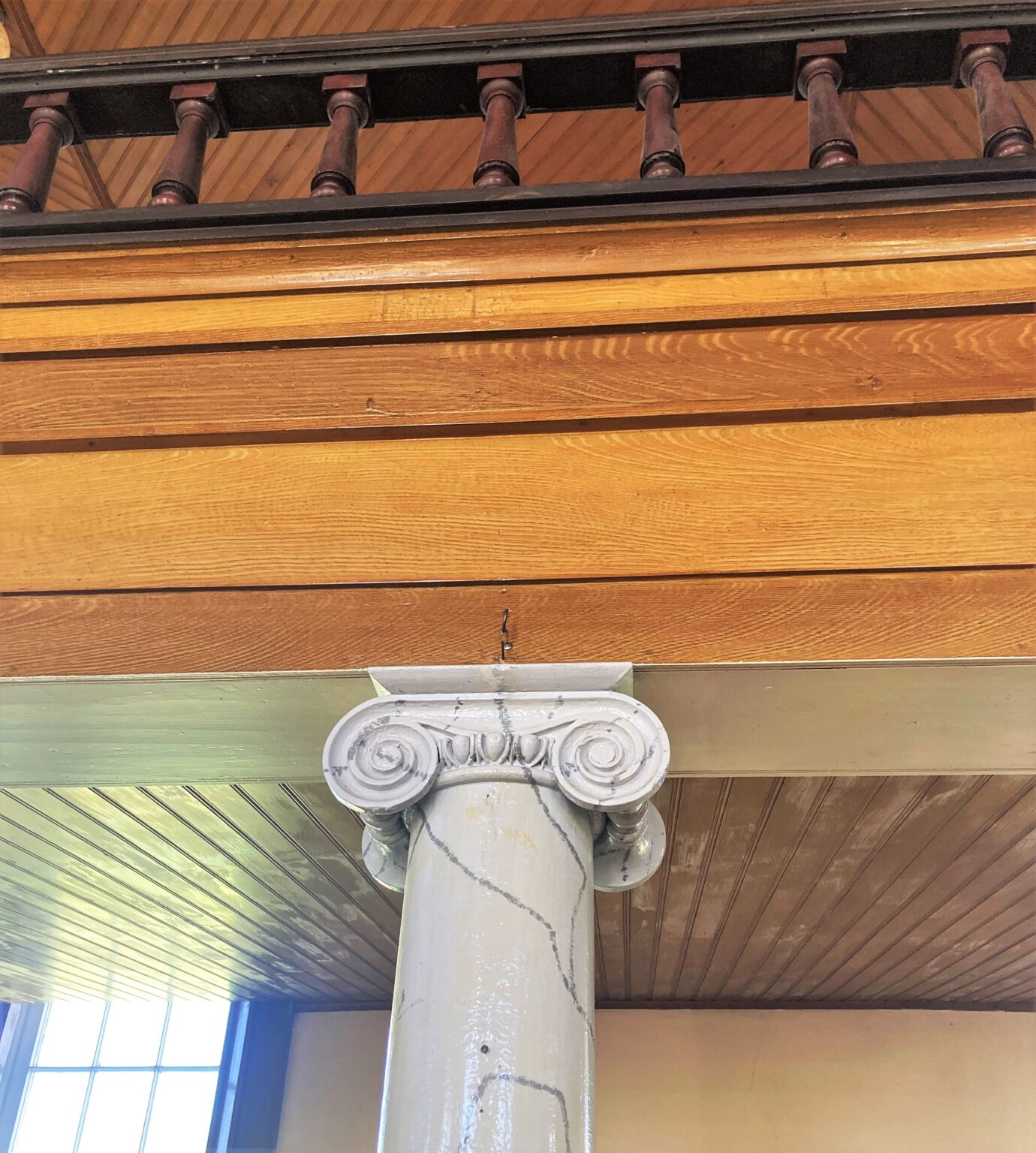 That is the back of Scott Robson’s head. He sadly and unexpectedly died last week. We remember him, during a presentation at this workshop, saying something disparaging about red and white quilts. I’m sure he was not talking about Mary Bailey’s red and white quilt. It’s stunning. 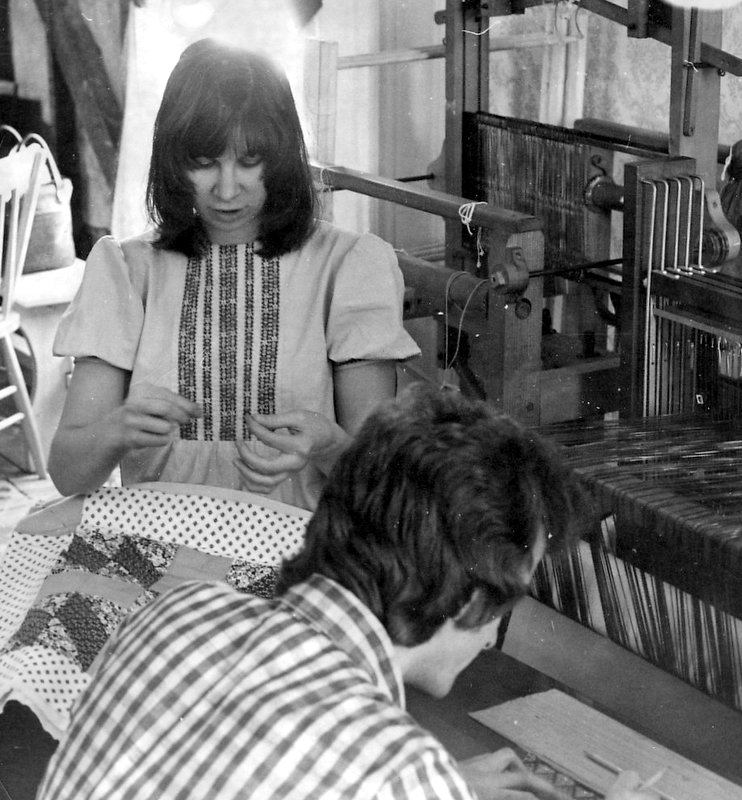