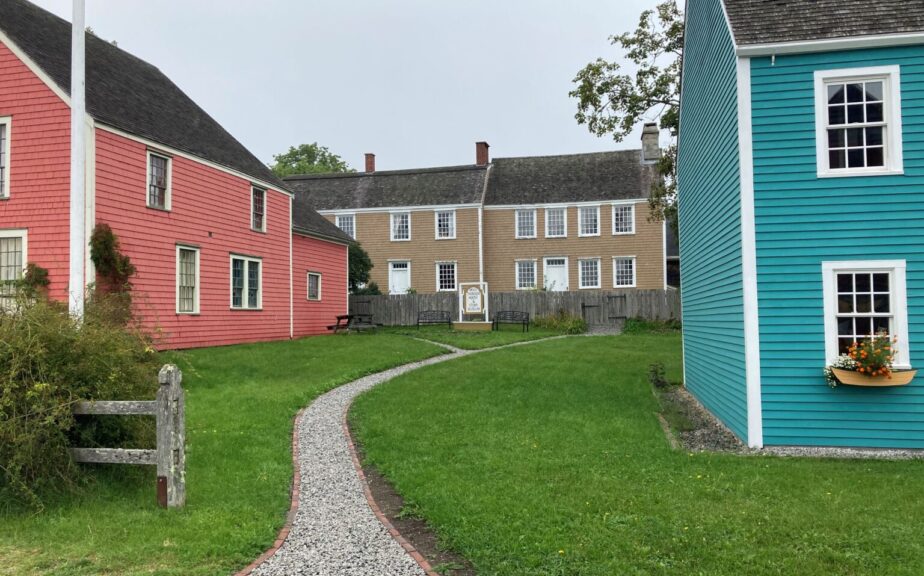 In early September we spent four days in the Liverpool to Cape Sable portion of the south shore. One goal was to walk on beaches and that was achieved with ease. Staying on Summerville Beach means a panoramic view. . . 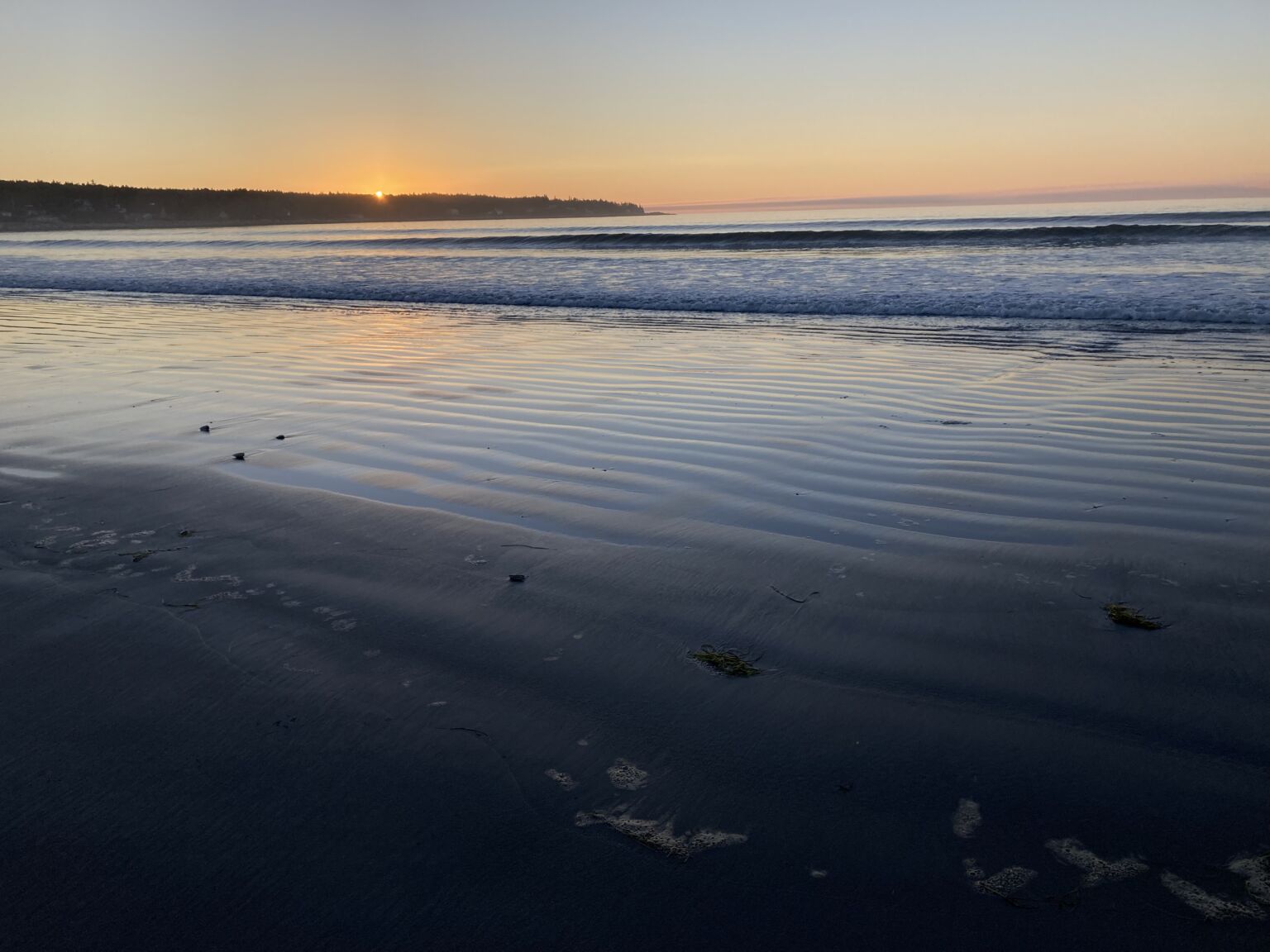 and the sunset. Walking on the beach we looked just like those old people in the advertisements. You know, the ones who saved for their retirement. 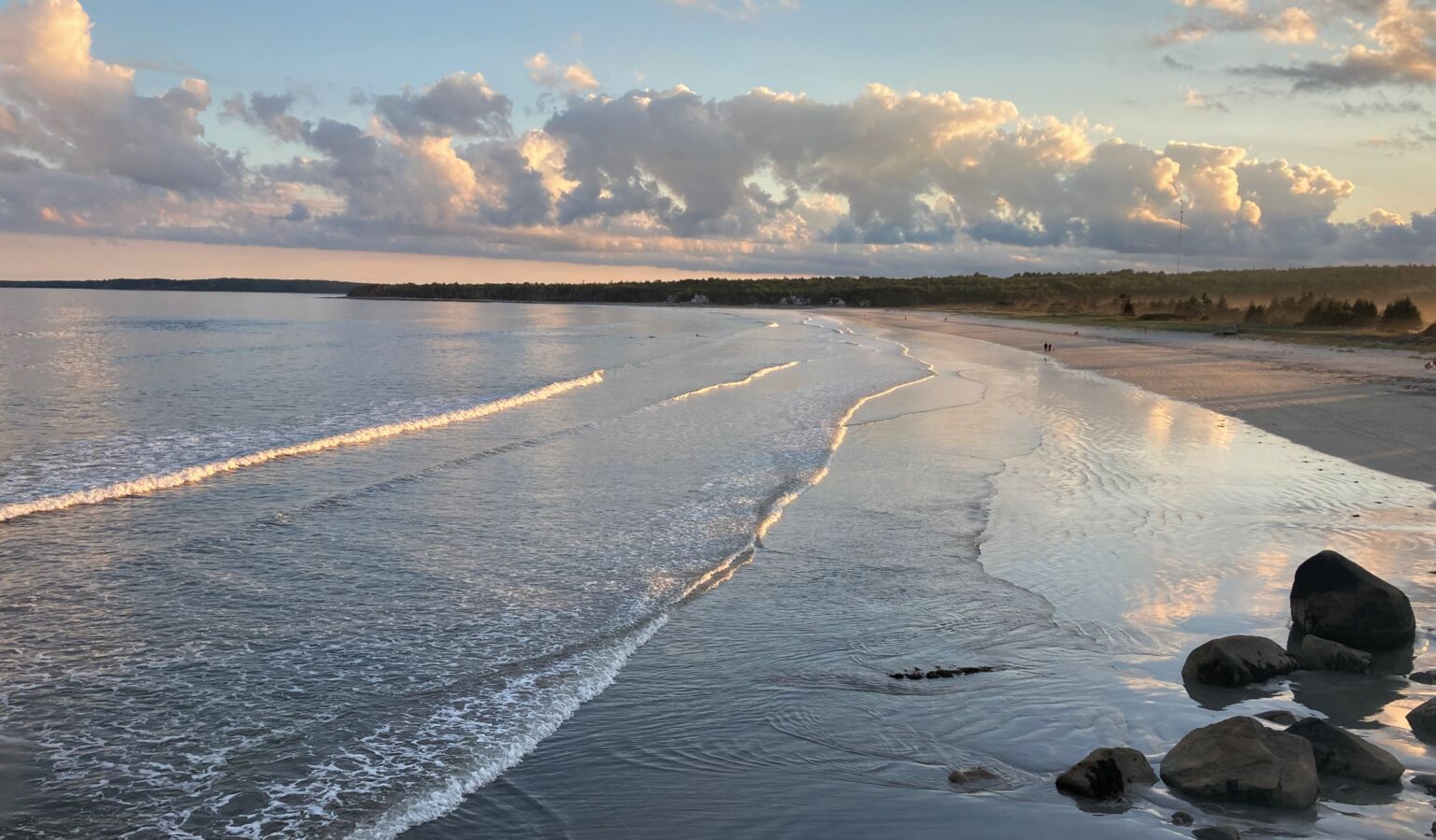 The other trip goal was an old standard: experience the richness of our cultural landscapes.

In Liverpool the Perkins House Museum has reopened after six years, and a costly intervention to prevent it from collapsing into the cellar. The 1766 house now has the same precise geometry as many of the neo-vernacular residences sprouting up on crags, and golf courses around our shores. 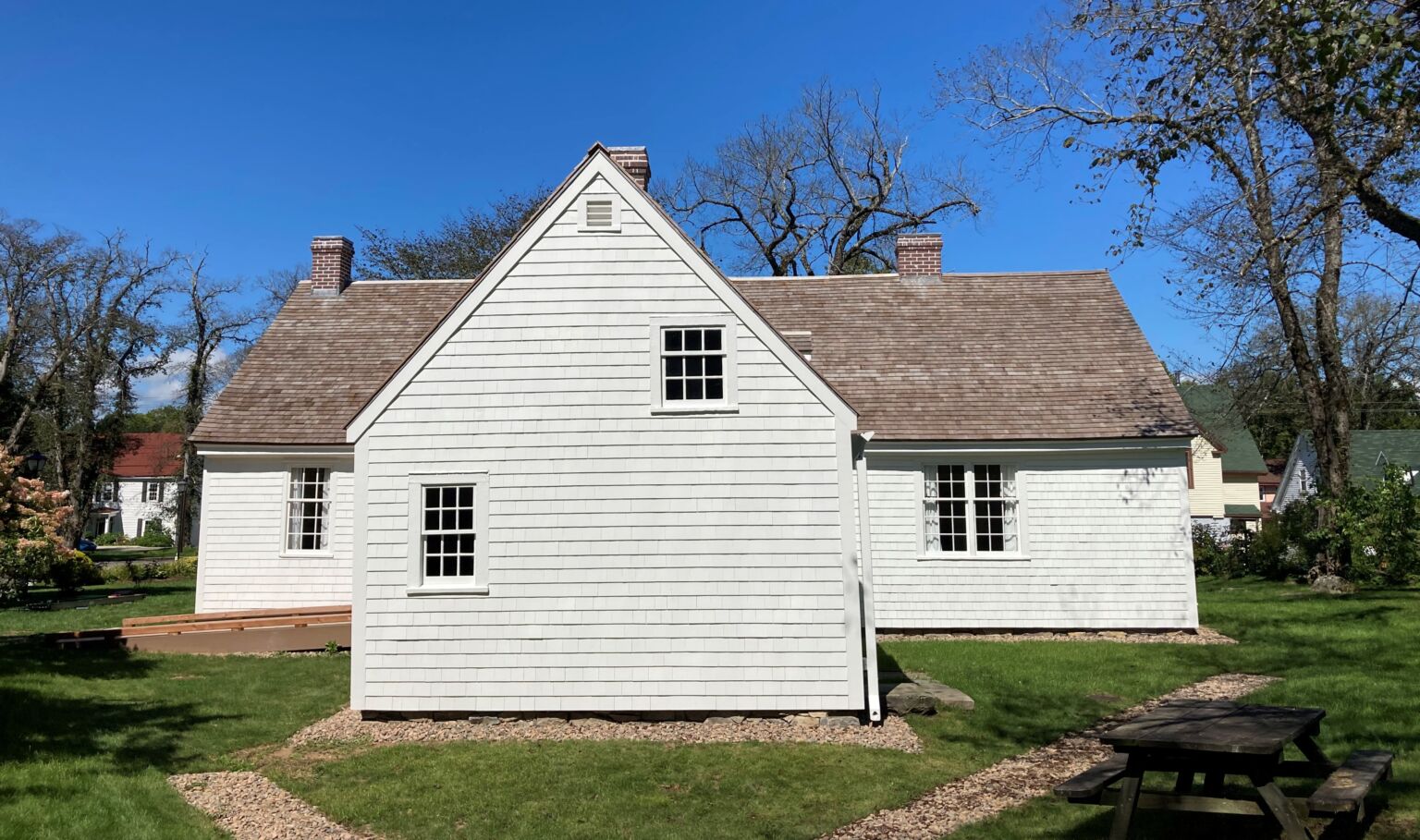 At Clyde River we stopped to stroll in a moss-carpeted cemetery and realized that the church next door was the unfortunate St. Matthew’s that lost its steeple to a lightning strike in the summer. It’s a grand building with robust detailing that to my eye feels New England. Maybe the builders visited relatives in the Boston states and came home with ideas and pattern books? 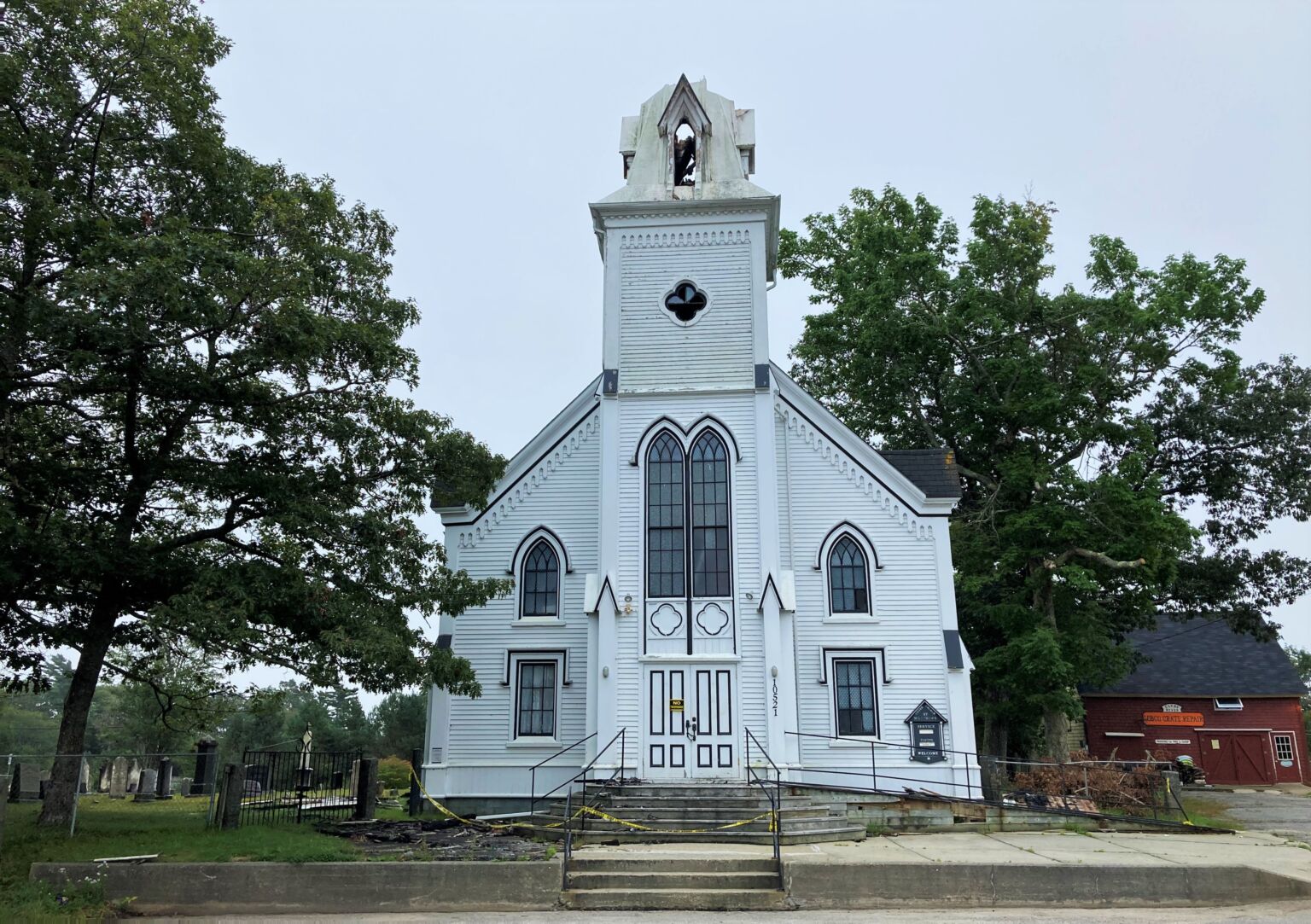 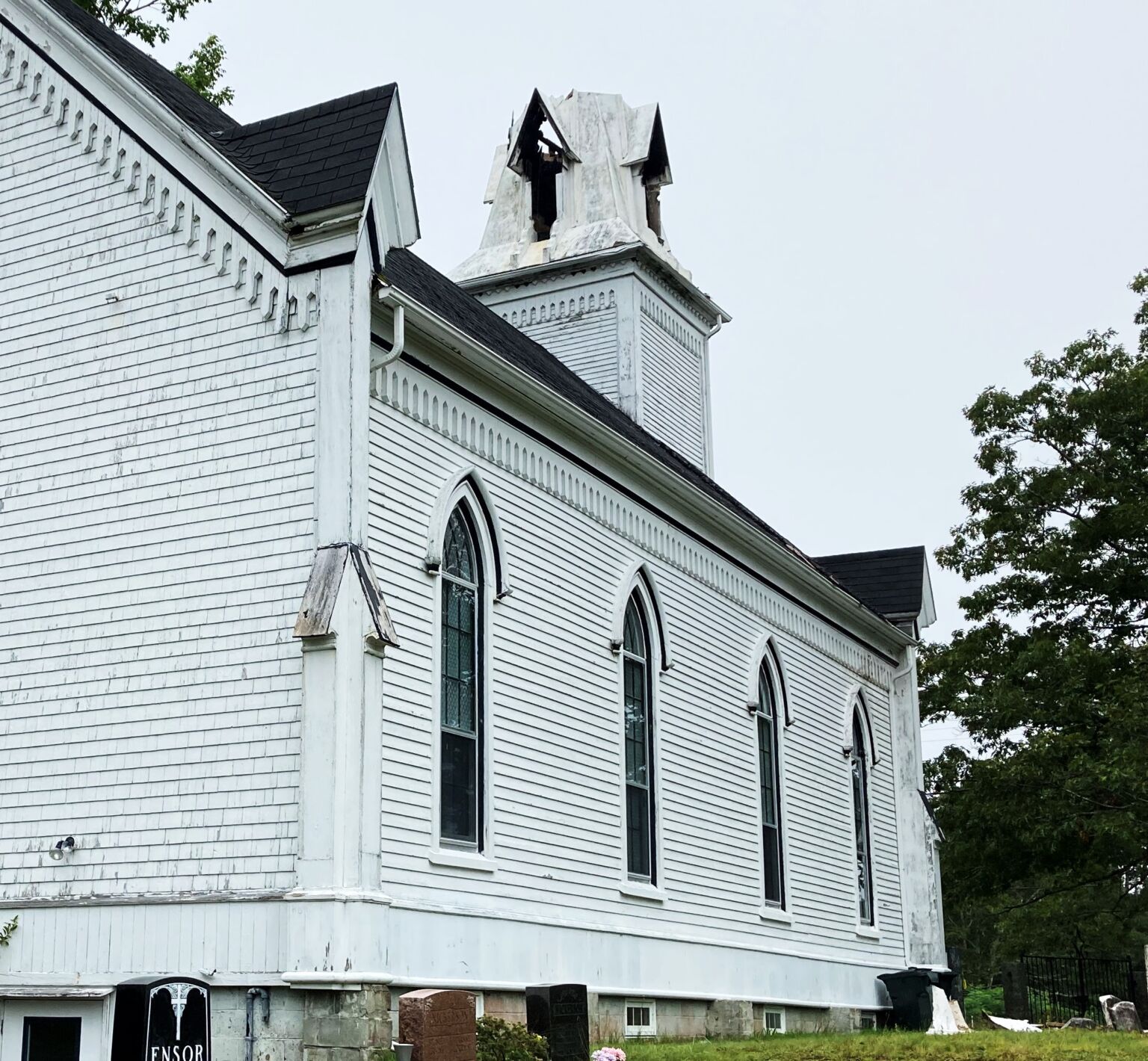 The bell was definitely American, made in West Troy, New York, and since the fire has taken up residence behind the church. The message cast into the side of the bell tells us it was made especially for this church for Christmas 1894 and is named “Excelsior,” which means onward and upward. We took this as a sign that the bell will return to a restored steeple and belfry. By the way, “Excelsior” is the motto of New York State. 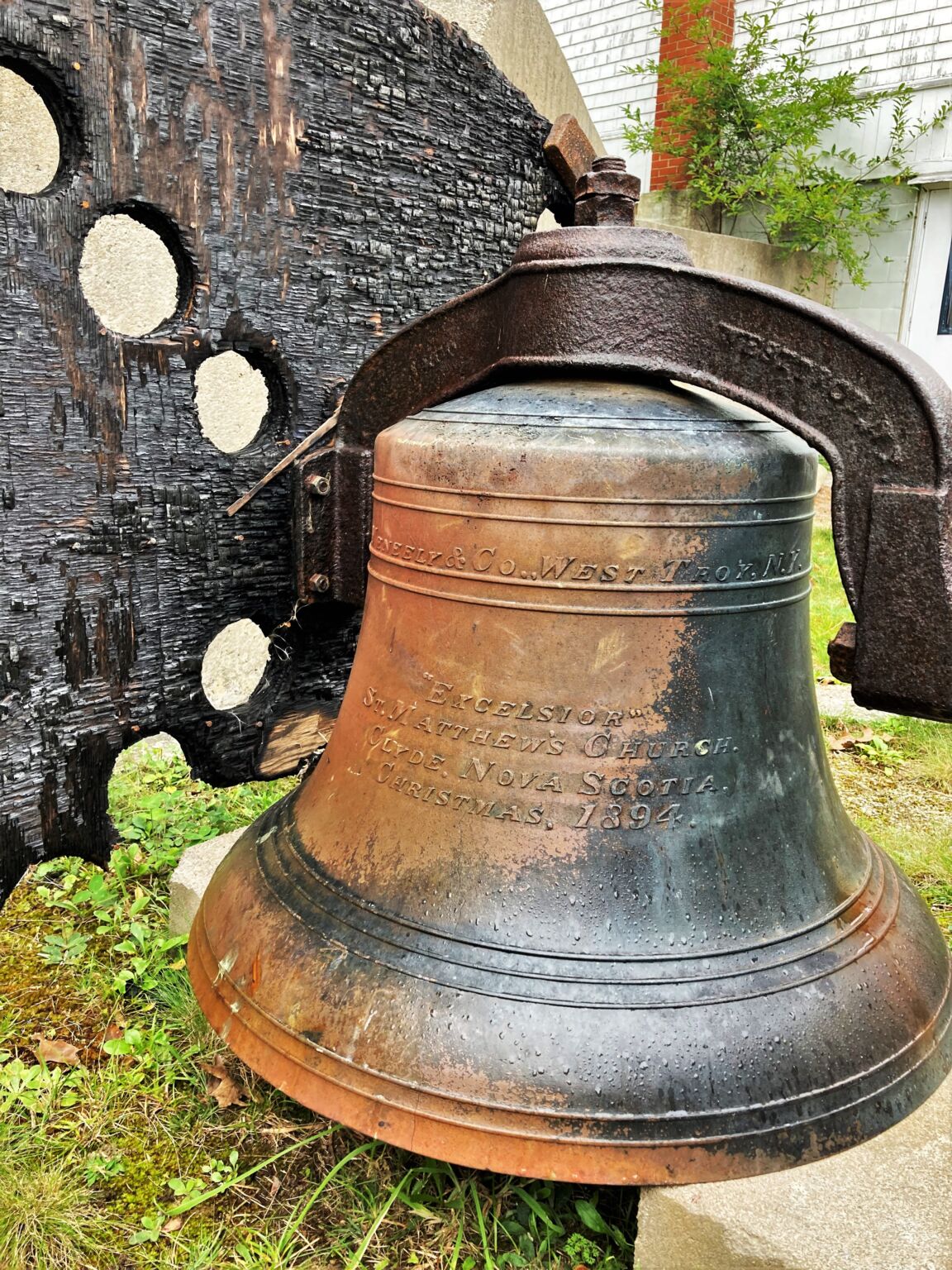 We became disoriented in thick fog at the end of Baccaro Point and stopped to get our bearings. Through the fog  we perceived the disconcerting illusion of a tall, looming structure, just a shade darker than the blanket of fog. We ventured forward and discovered a giant radar dome. This site has a colourful history, including World War II when 35 WRENS were stationed here operating top secret apparatus while armed with Sten guns to defend against sudden raids from U-boats. Sounds like a swell movie pitch. 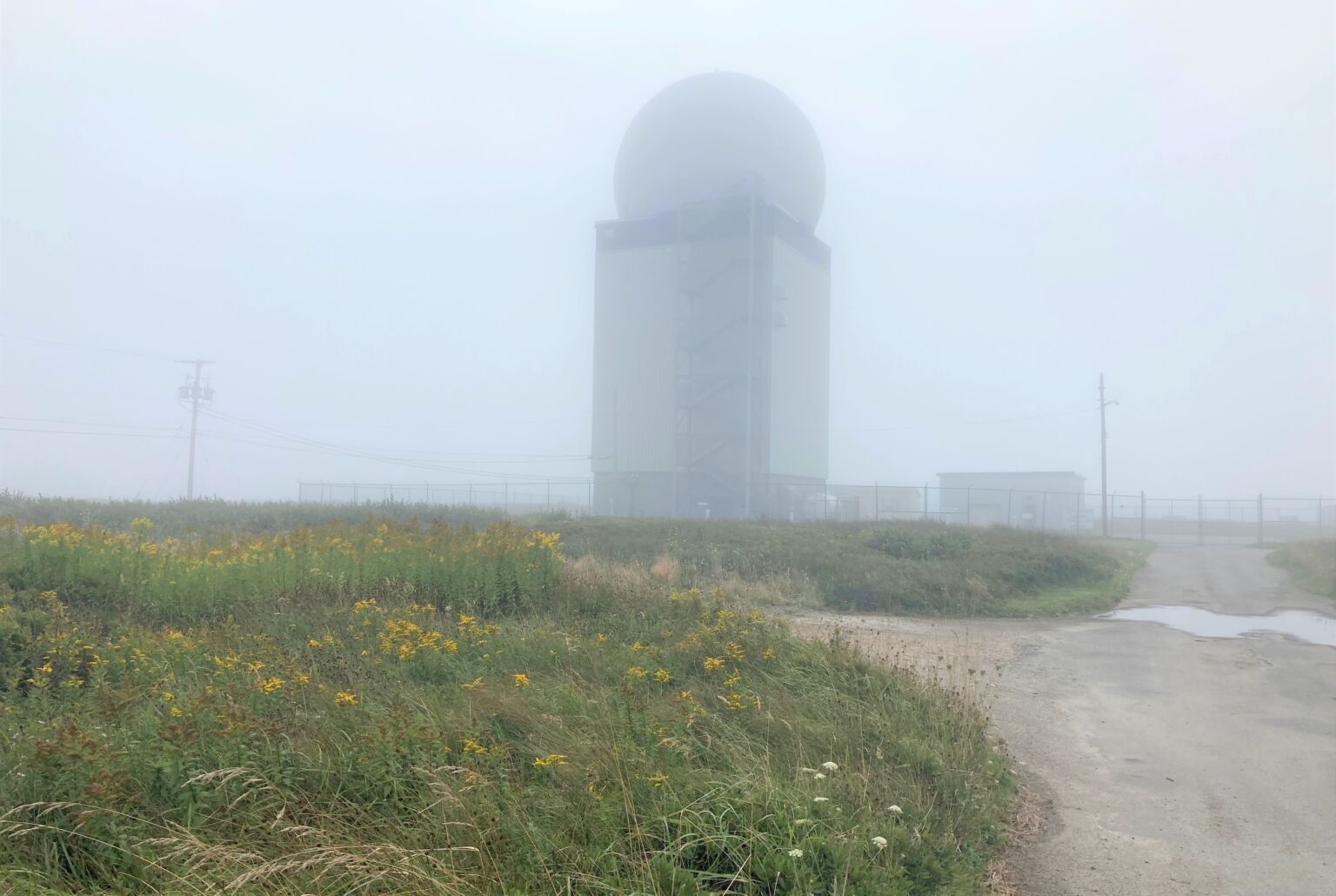 The bold geometry of the radar structure brought to mind the Trylon and Perisphere, icons of the 1939 New York World’s Fair. Perhaps there was something in the fog? 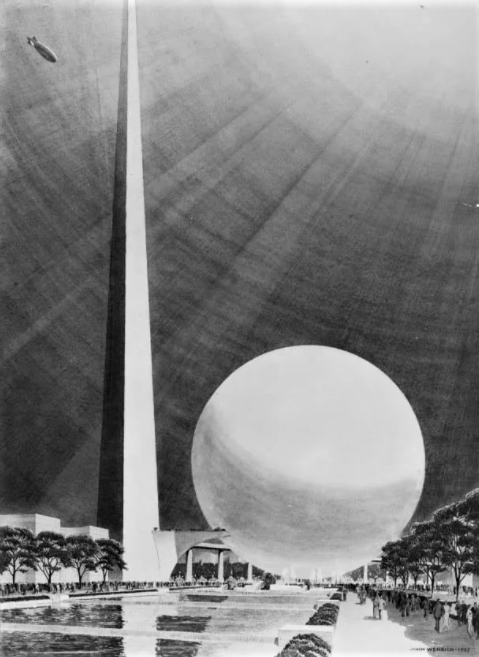 Nearby we visited a real story of mystery and discovery, the ongoing archaeological investigation of Fort Saint Louis, a 17th century French outpost. Dr. Katie Cottreau-Robins, from the NS Museum, has led this research over a couple of years. An unexpected revelation has been artifacts that suggest those pesky Basque fishermen might have also used the site. Nova Scotia should be thinking about future cultural exchanges with the Basque (e.g. feed me all that Basque cuisine). 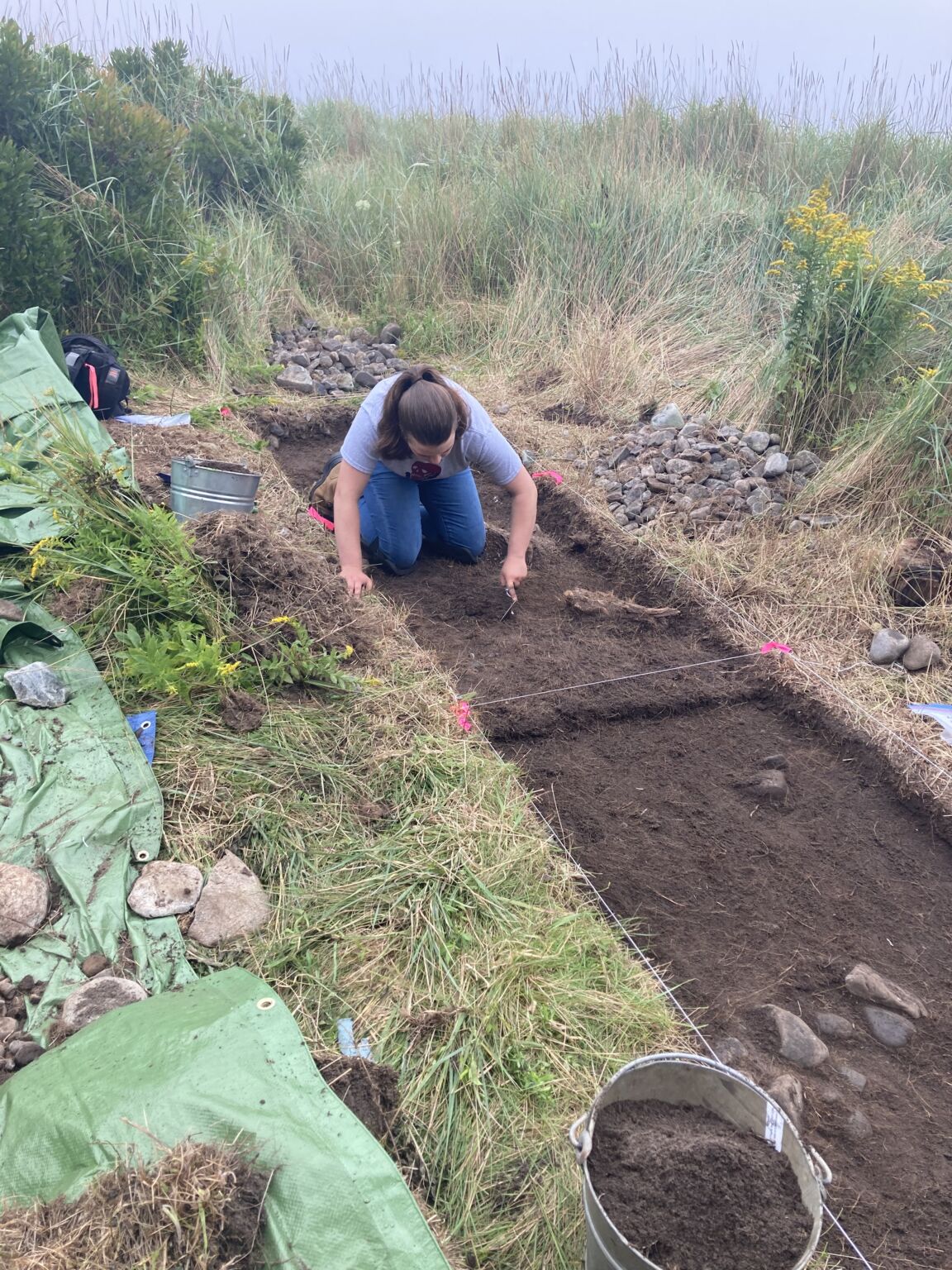 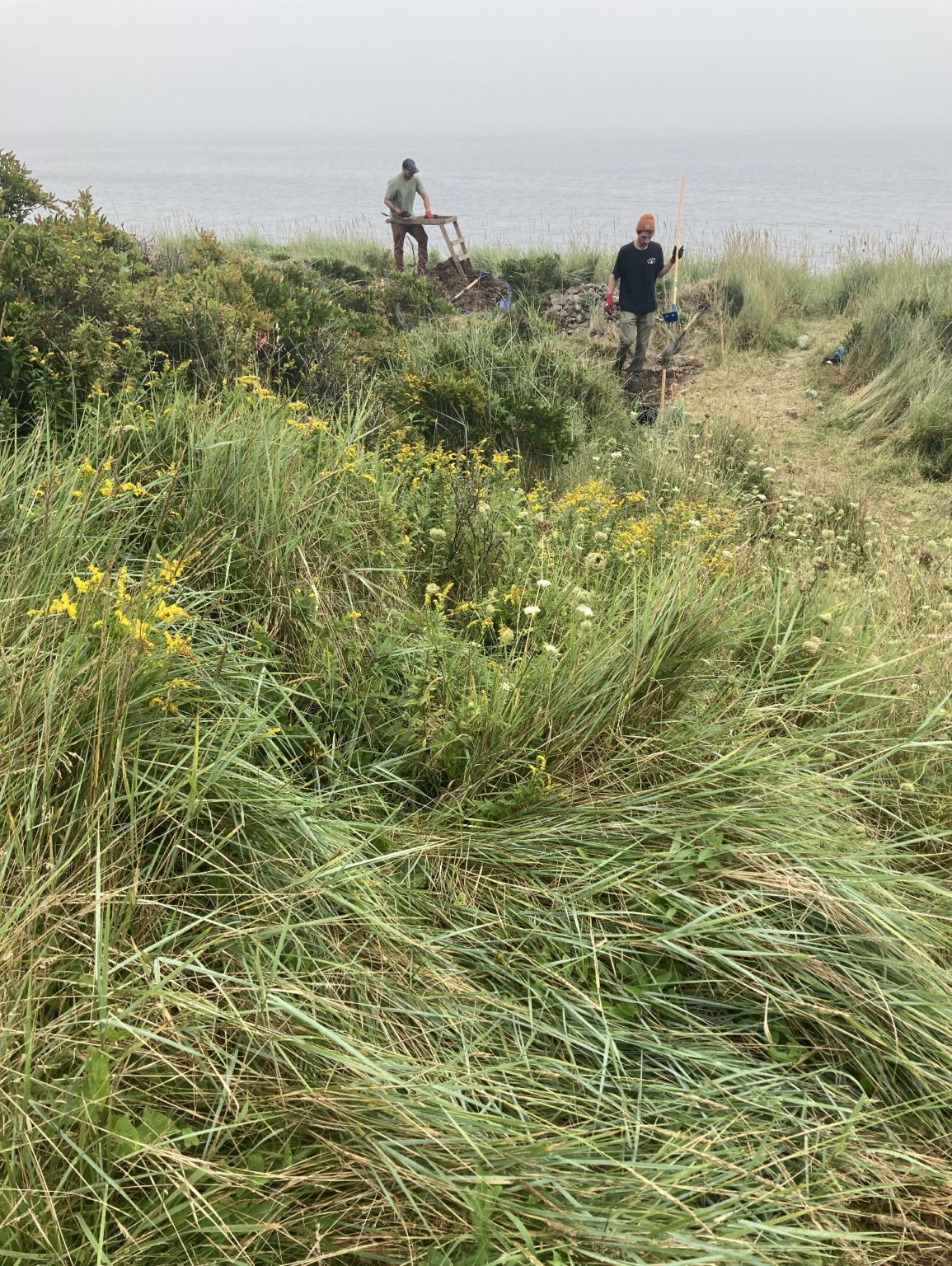 The unexpected treat on Cape Sable Island was a magnificent cobblestone church in Clark’s Harbour, perhaps the largest cobble building in the province. The United Baptist Church was dedicated in 1927 and the design was by well-known Halifax architect S. P. Dumaresq. The builders were from the region, and the stone came from close at hand on the islands. You can discover all of its history here. 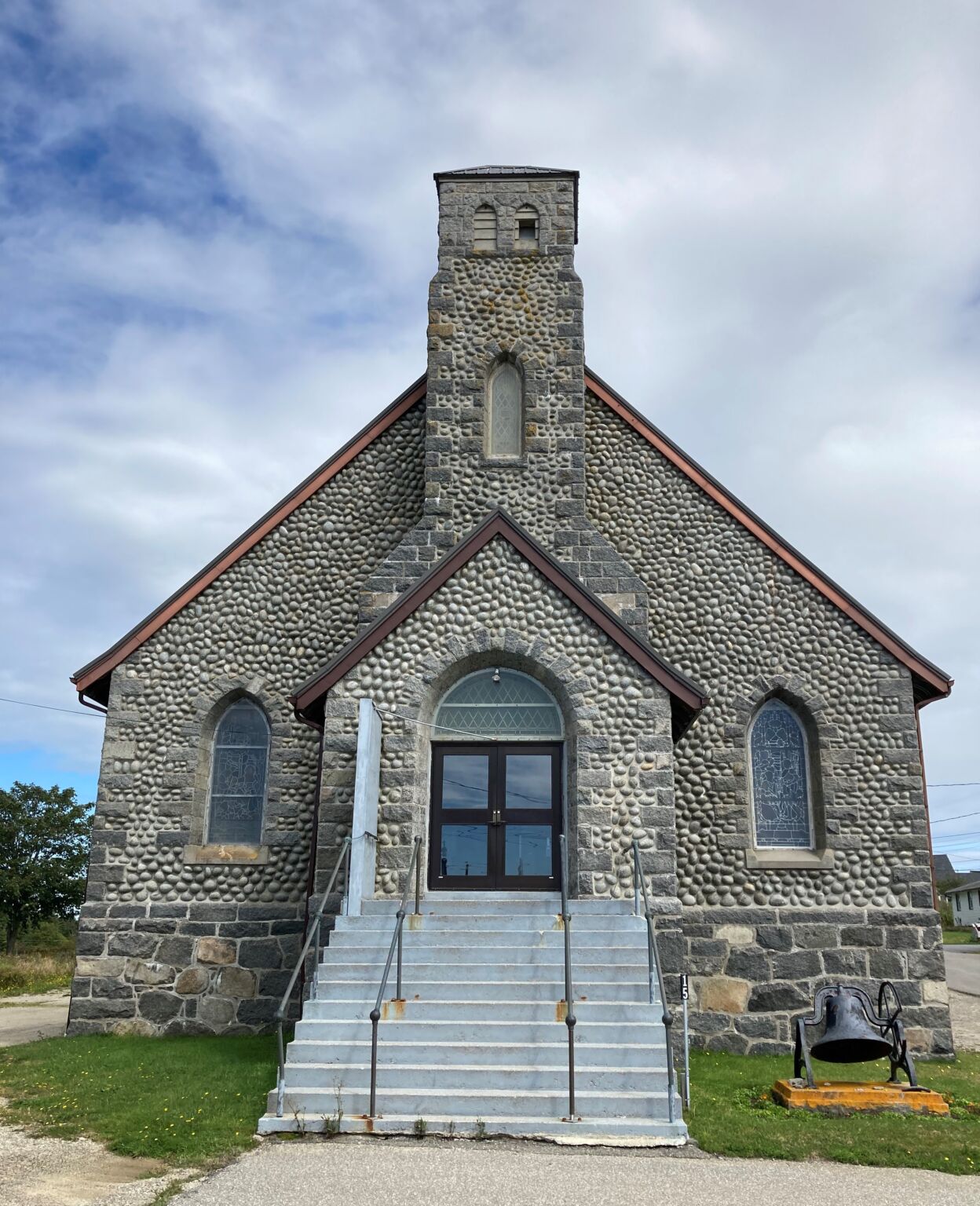 The granite for the robust foundation was quarried from boulders dropped by glaciers. 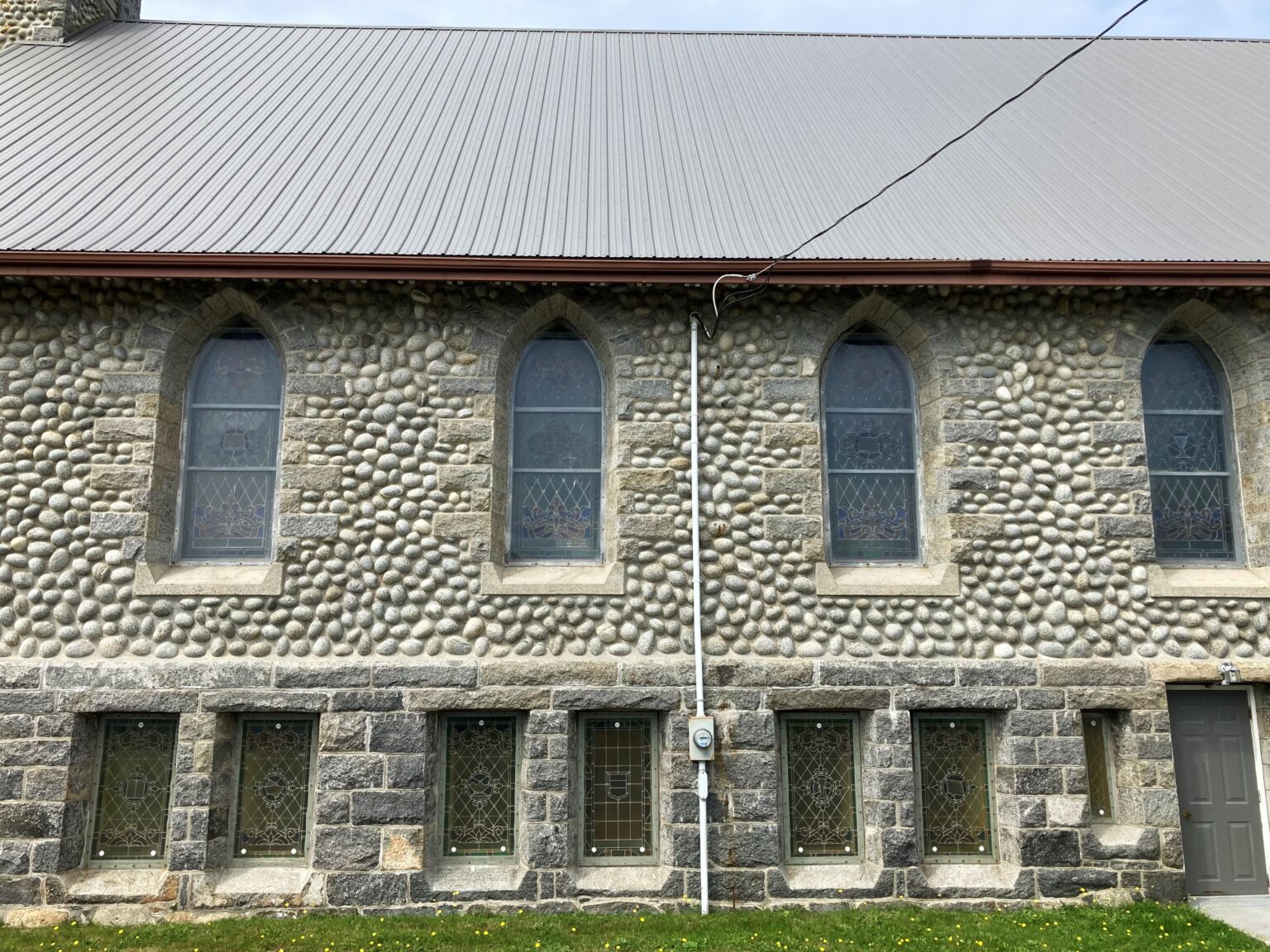 The Shelburne waterfront was our home for two nights. The 18th and 19th century buildings make it a delightful walking town, even in drizzle. And it was not crowded with tourists like some other towns we can think of. 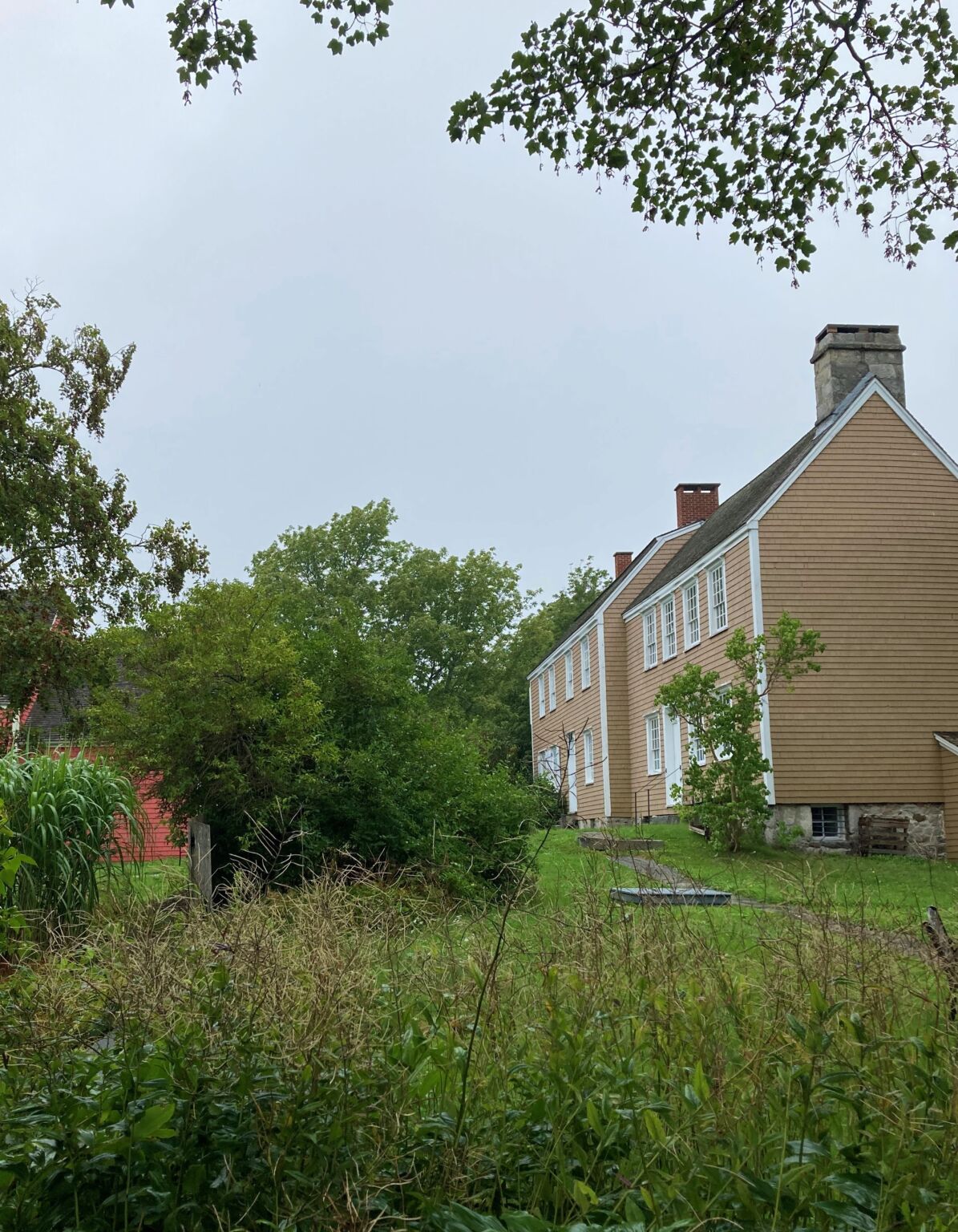 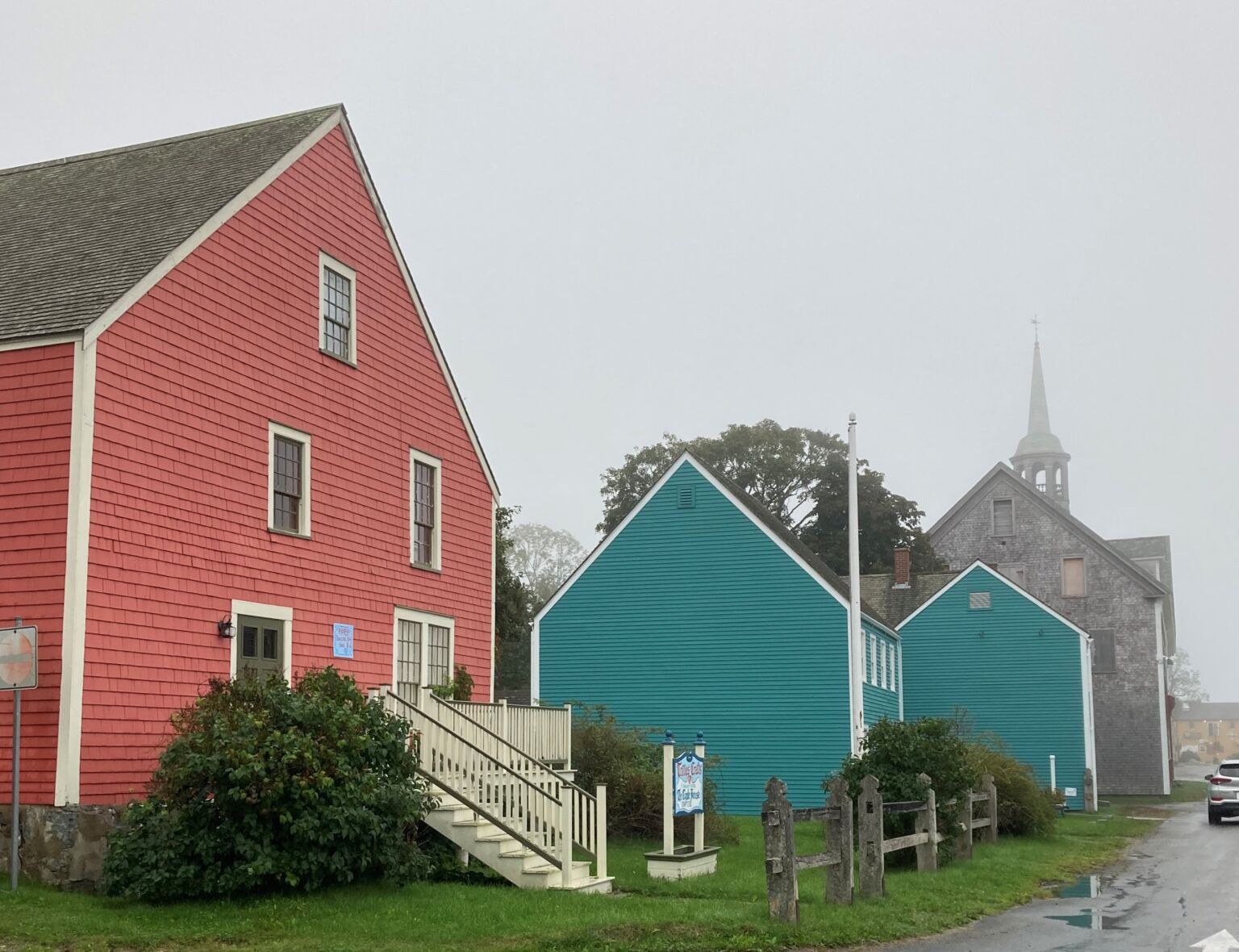 Colourful Tottie’s Crafts and the Shelburne County Museum outstanding in the fog.

On my morning ramble these two buildings seemed to be not on speaking terms. The former post office is grand but appears to be under-used. 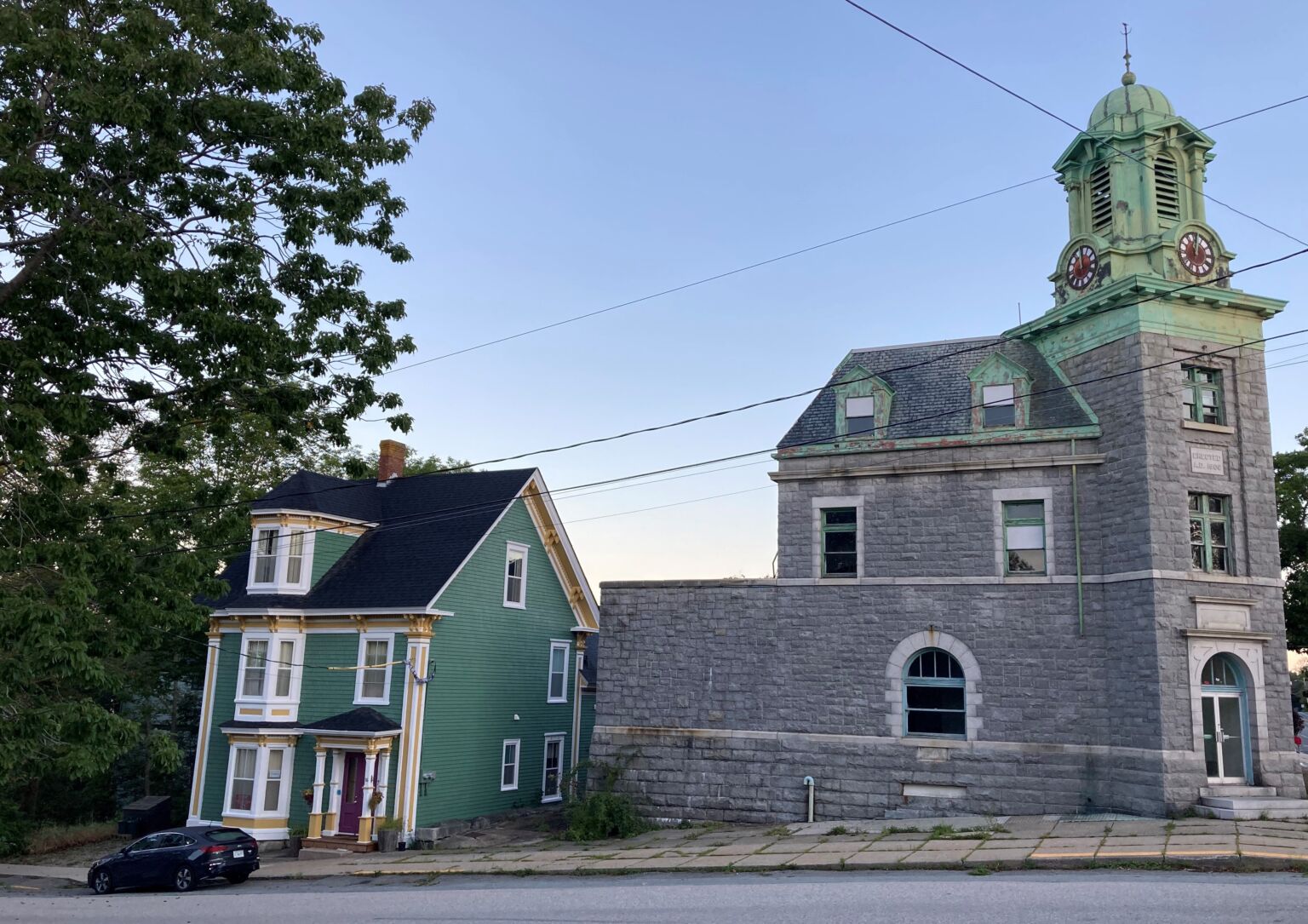 A couple of streets in from the harbour, we were smitten by this perfect craftsman-style bungalow. 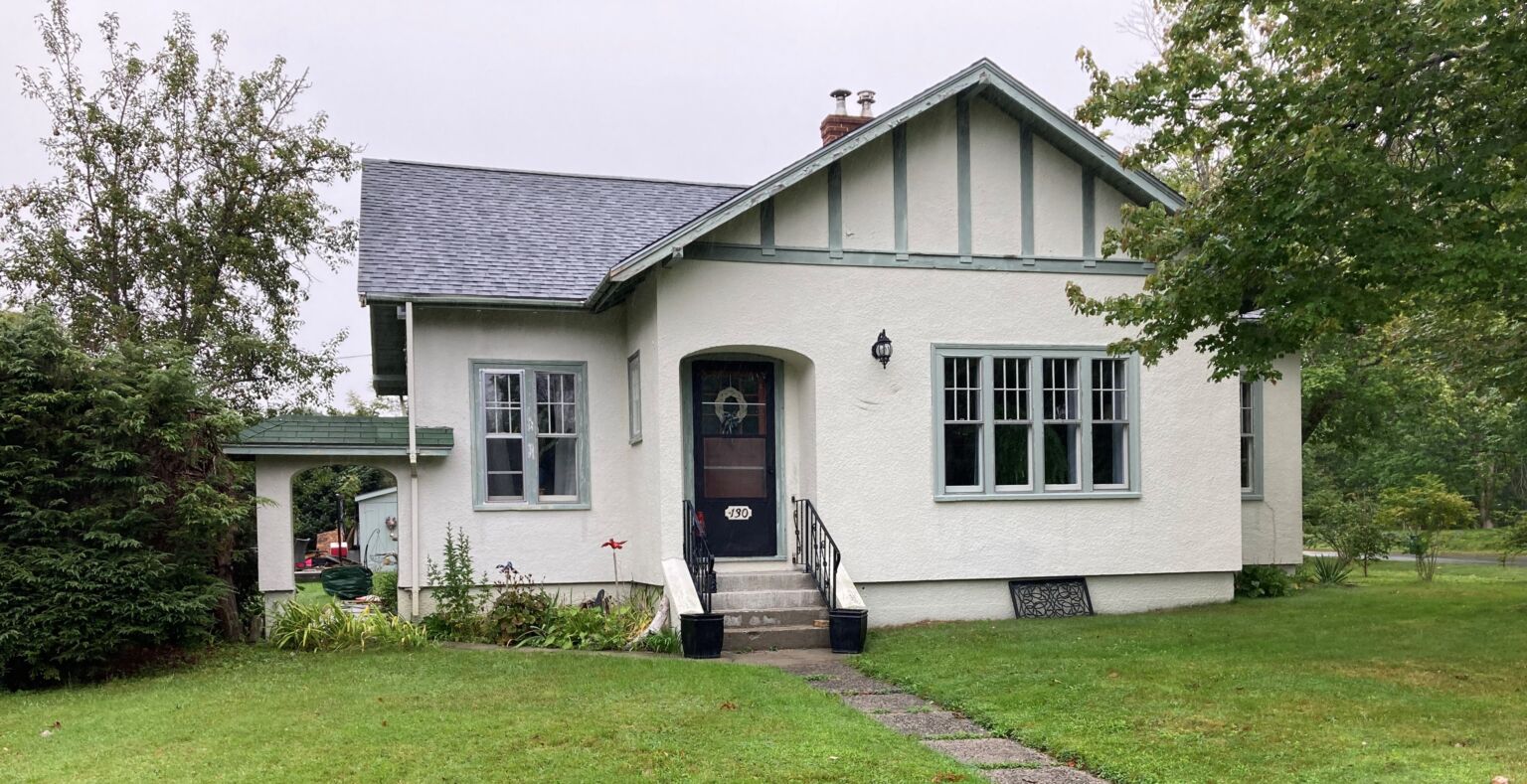 Shelburne was our destination so we could eat one last time at the Charlotte Lane Café. It has been a favourite of Sheila’s for decades. A town can’t thrive without good food, hopefully new people will take over the location. 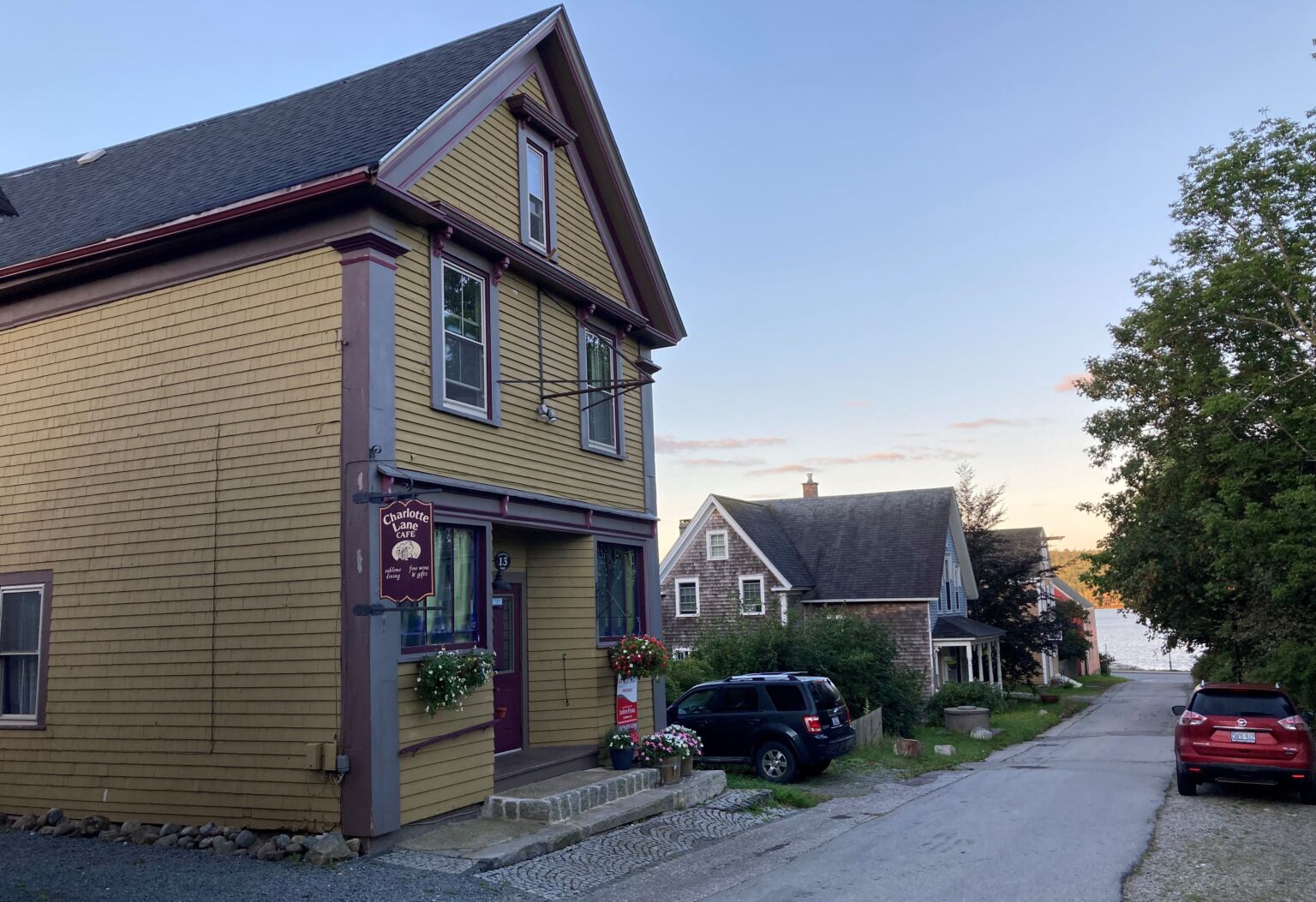 Barrington Passage was a surprise. It’s always been the commercial hub for the area but now it has the energy of a boomtown. A place where you can buy a big, new truck and then celebrate next door with a $35.00 lobster roll. The fishing industry appears to be doing well.

We picked up lunch at Dan’s Ice Cream Shoppe, a colourful, retro-styled diner that any town would welcome. 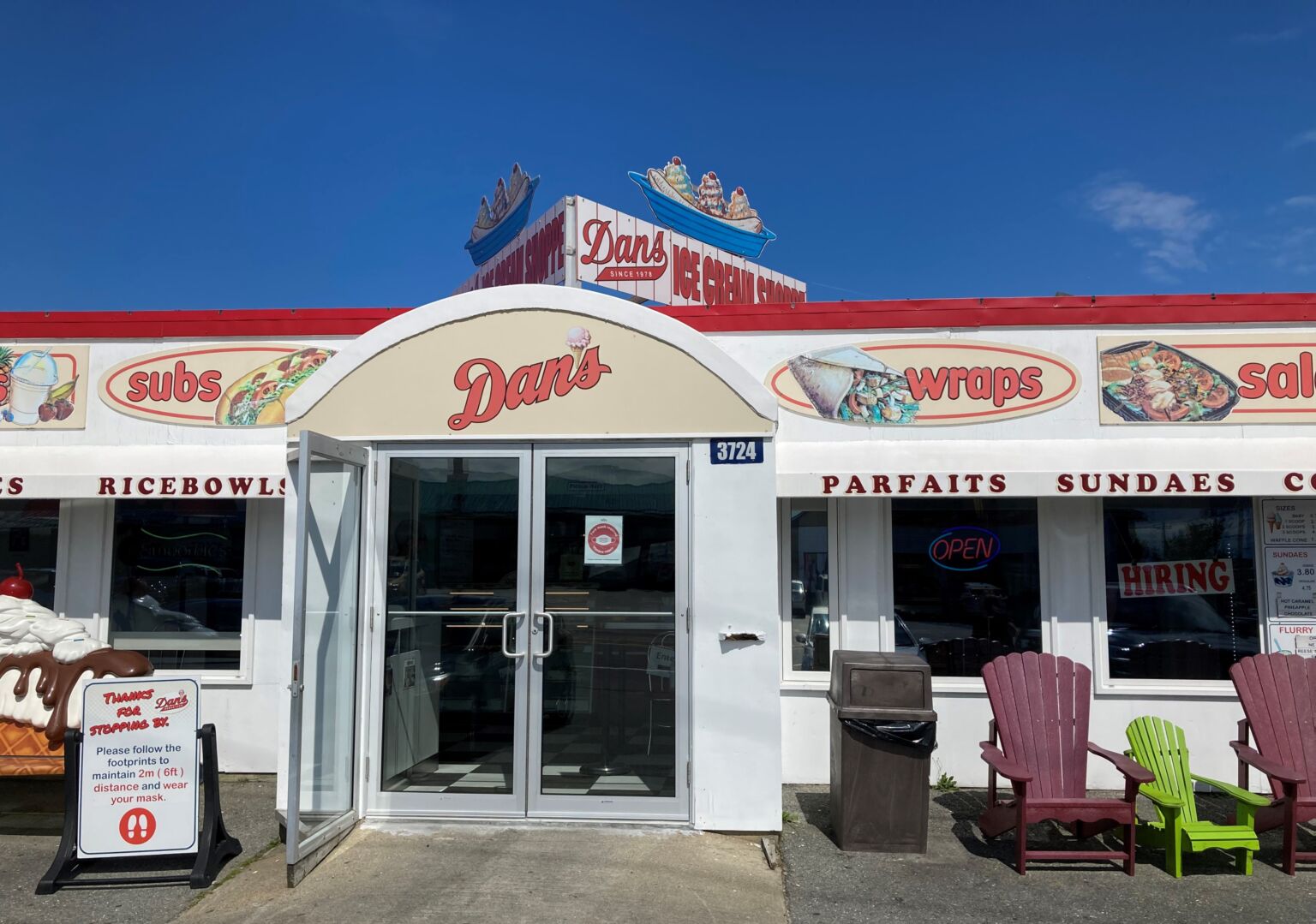 On our way back to the city we decided that coffee milkshakes were really what we wanted for lunch. Turns out Mahone Bay had just what we needed at this cheerful little stand. 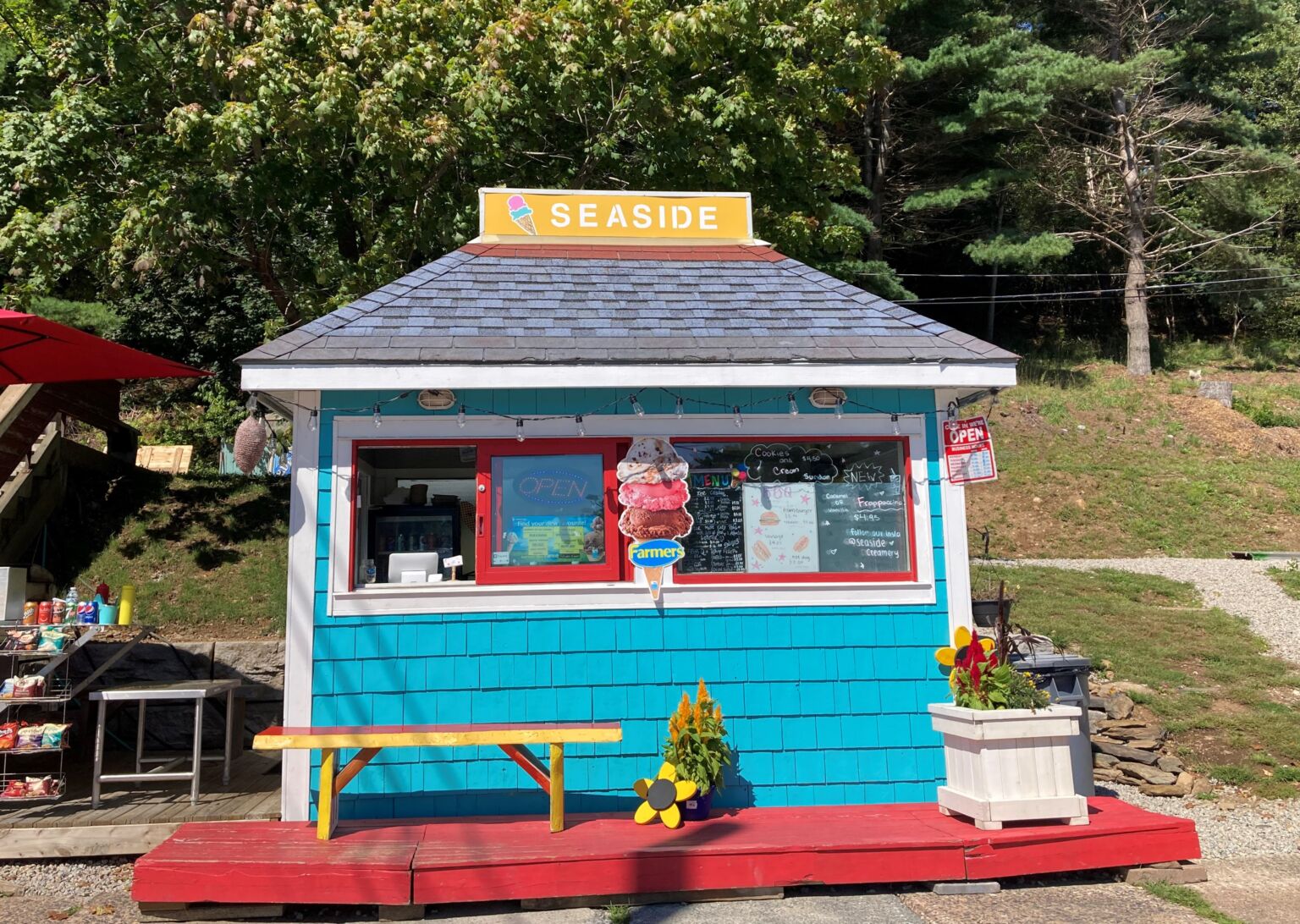 The shades of night were falling fast,
As through an Alpine village passed
A youth, who bore, ‘mid snow and ice,
A banner with the strange device,
Excelsior!

Handsome youth is later found frozen with his Excelsior banner. As a child I was fascinated by an illustration of the ill fated adventurer and would return to it often. This and the 1959 Disney movie Third Man on the Mountain put me off alpine climbing. 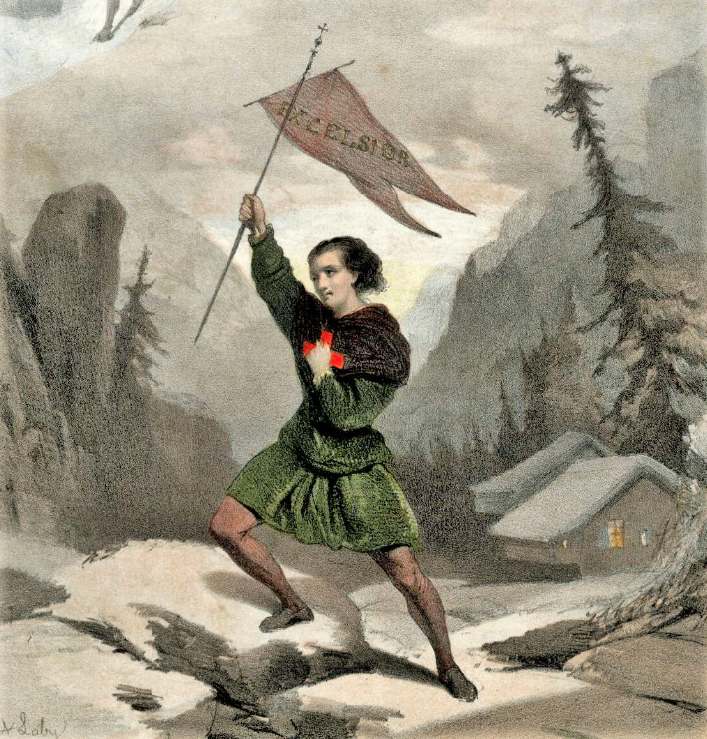 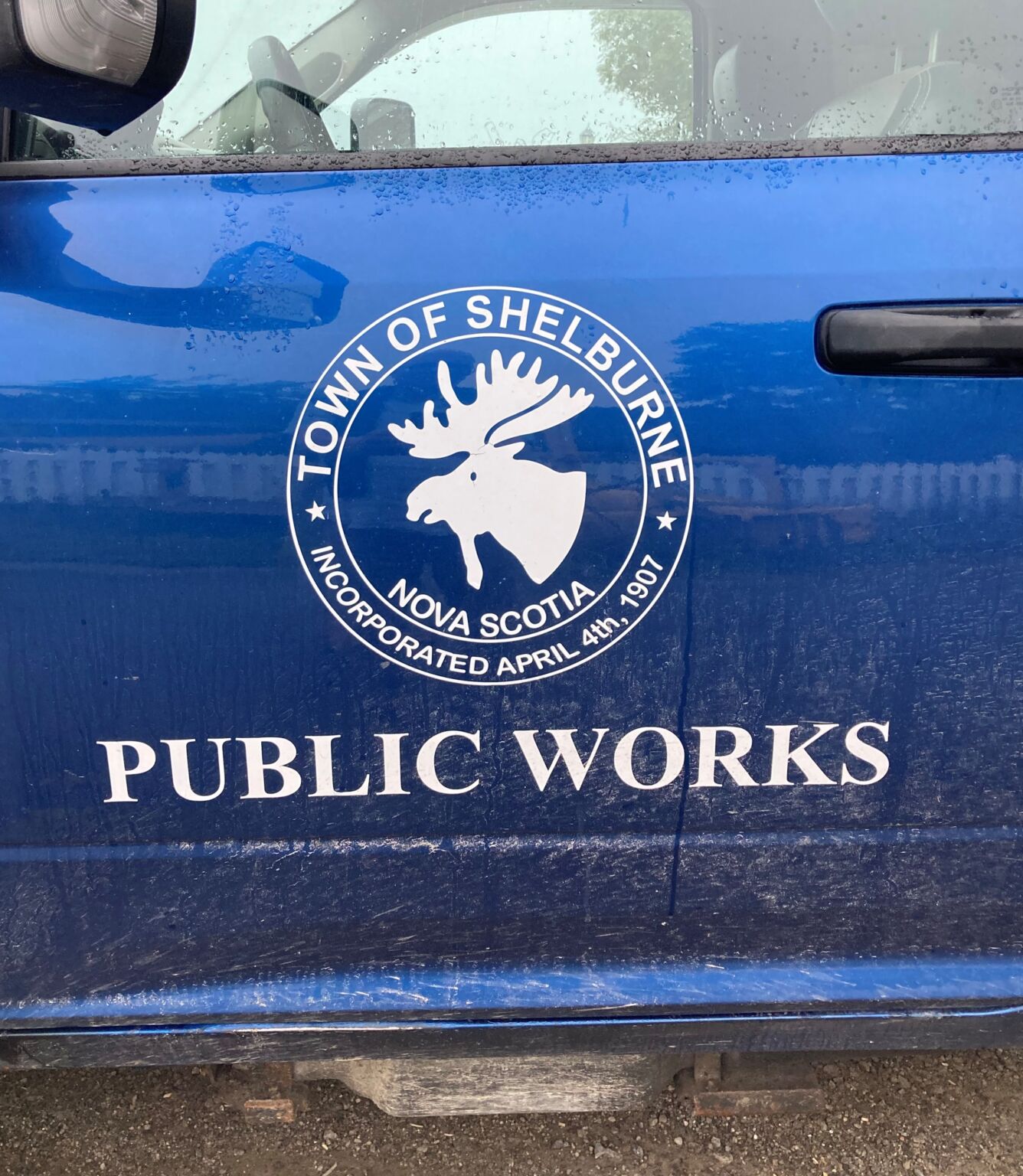 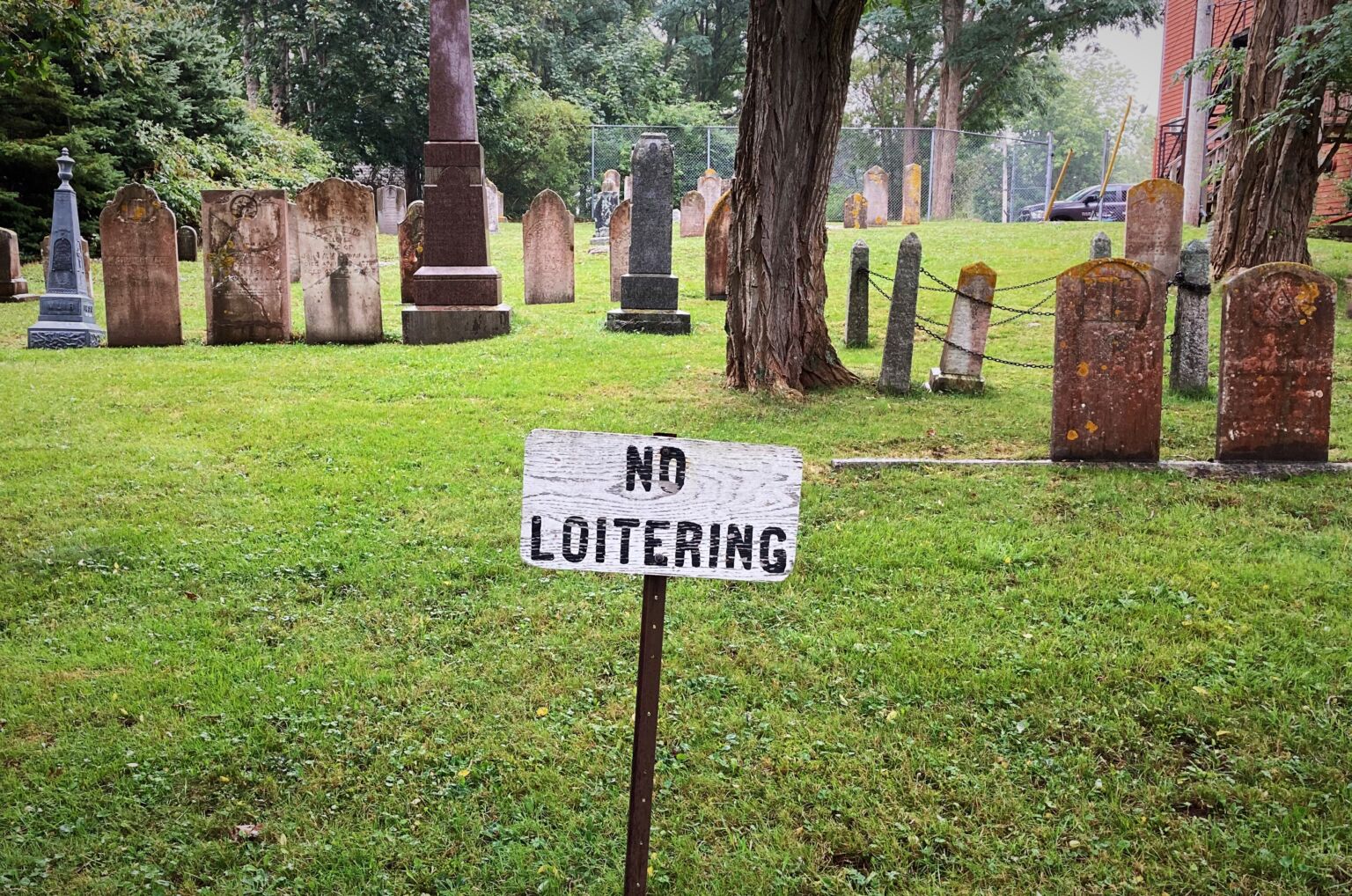 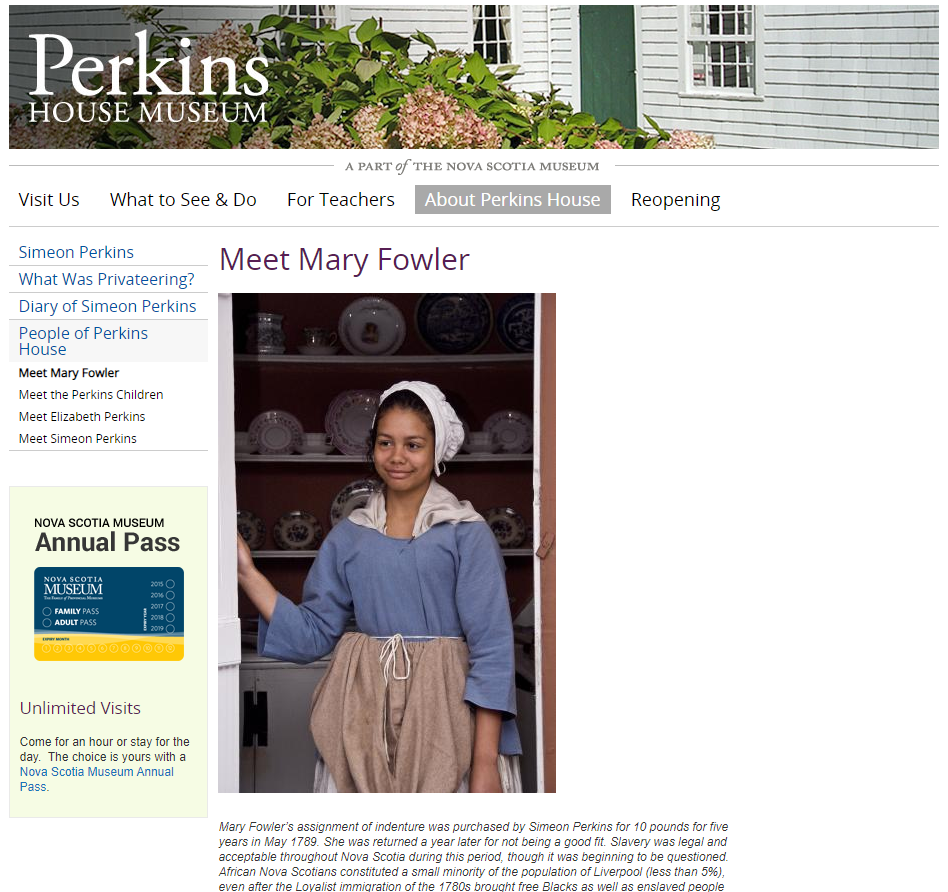