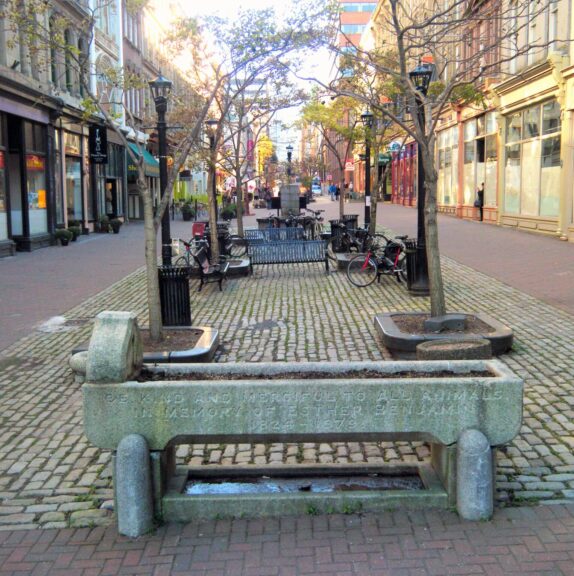 The oversupply of real news this summer has virtually blotted out the “dog left in a hot car” stories that are traditional summer fare during slow news doldrums. Also, mask shaming probably consumes some of that bandwidth usually expended on hot pet shaming. Still, people and animals need to keep hydrated, and that made me remember the water fountains that once quenched the thirst of people and beasts in many Nova Scotian communities.

Two memorable examples are found in Yarmouth. The best known, installed in 1883, is topped with a gold horse (made of zinc, painted gold). The cast iron plinth has water basins for all: the one now overflowing with reddish petunias was for people, the big basins would refresh horses and oxen, while the little trays at ground level would serve dogs or any other ground hugging critter. 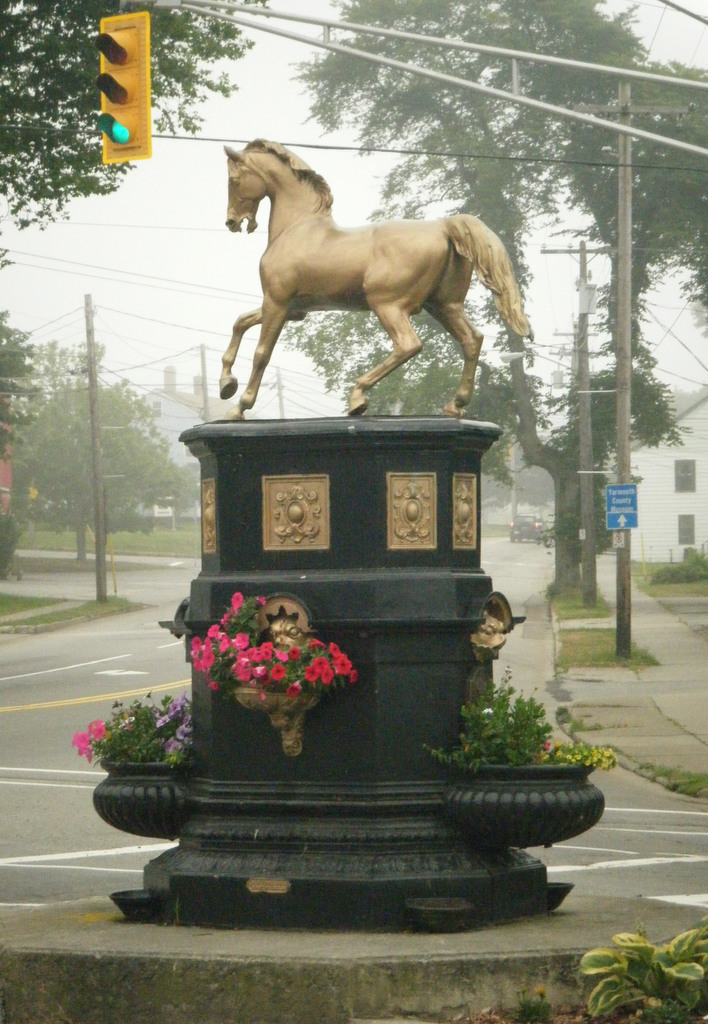 An equally wonderful, cast iron water trough was erected in 1895 on the far side of Yarmouth. The basins for horses and dogs have gone missing while the people-quenching bowls survive. The gold fish heads would have spouted water. 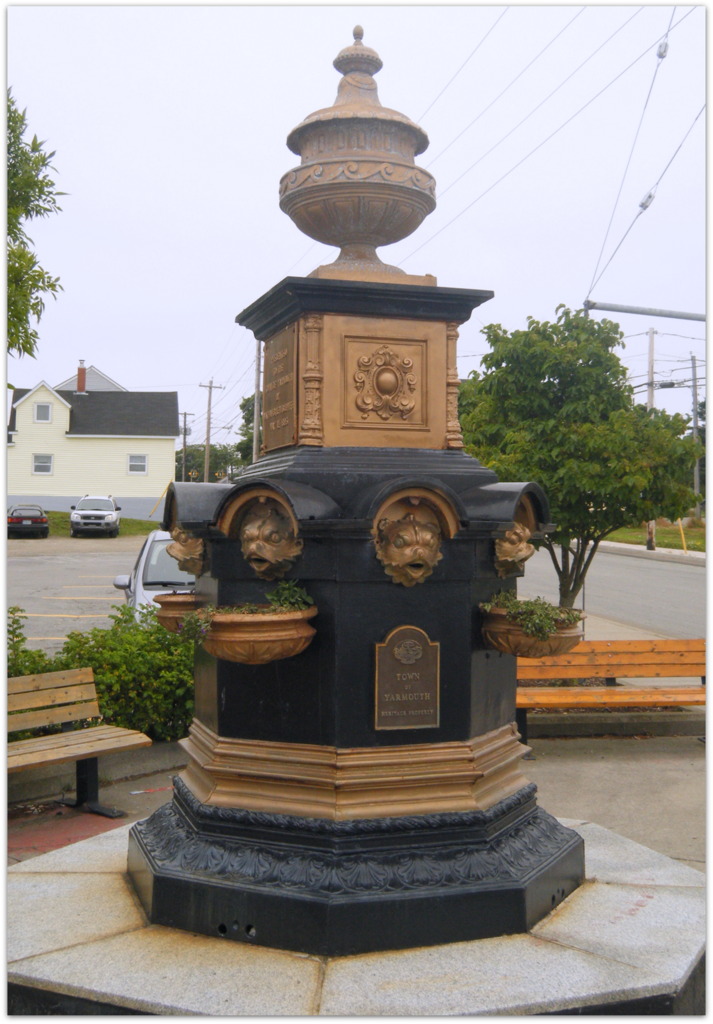 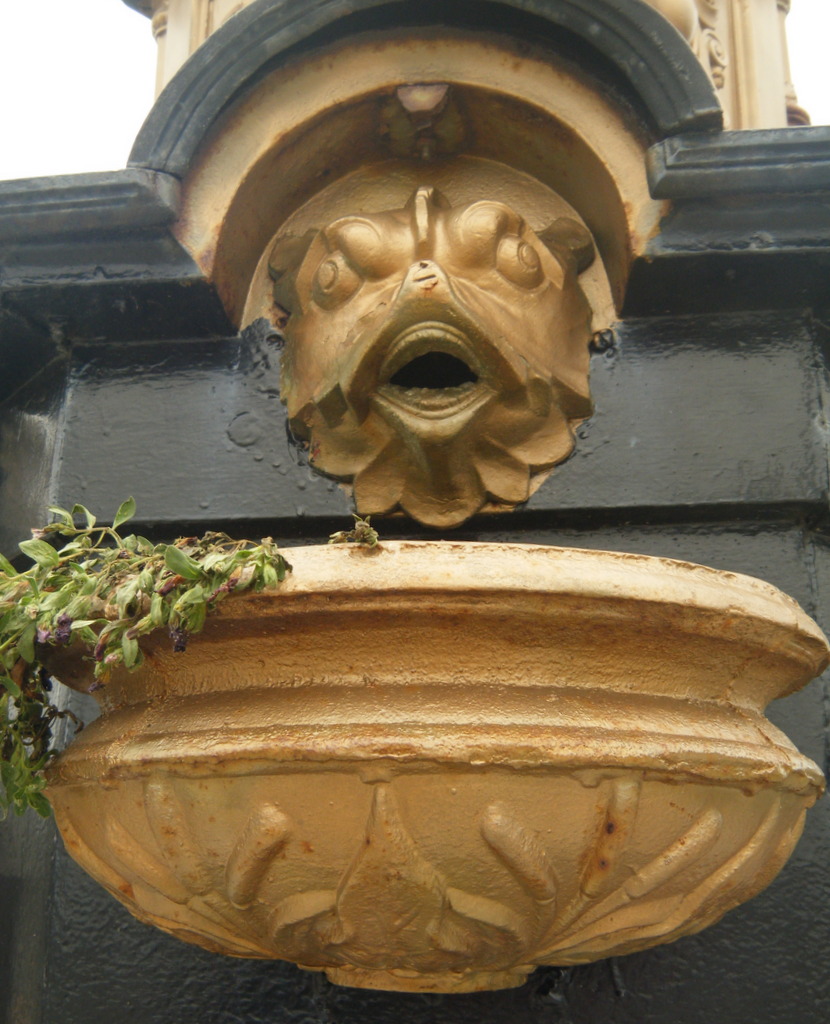 When I took these pictures in Lunenburg in the 1970s I was puzzled by this ornate cast iron base for a modern street light. Only later did I realize it was a horse trough. But all the clues were there: lion heads for spouting water, basins (used as planters), even the heron and bullrushes that were a popular motif on fountains. 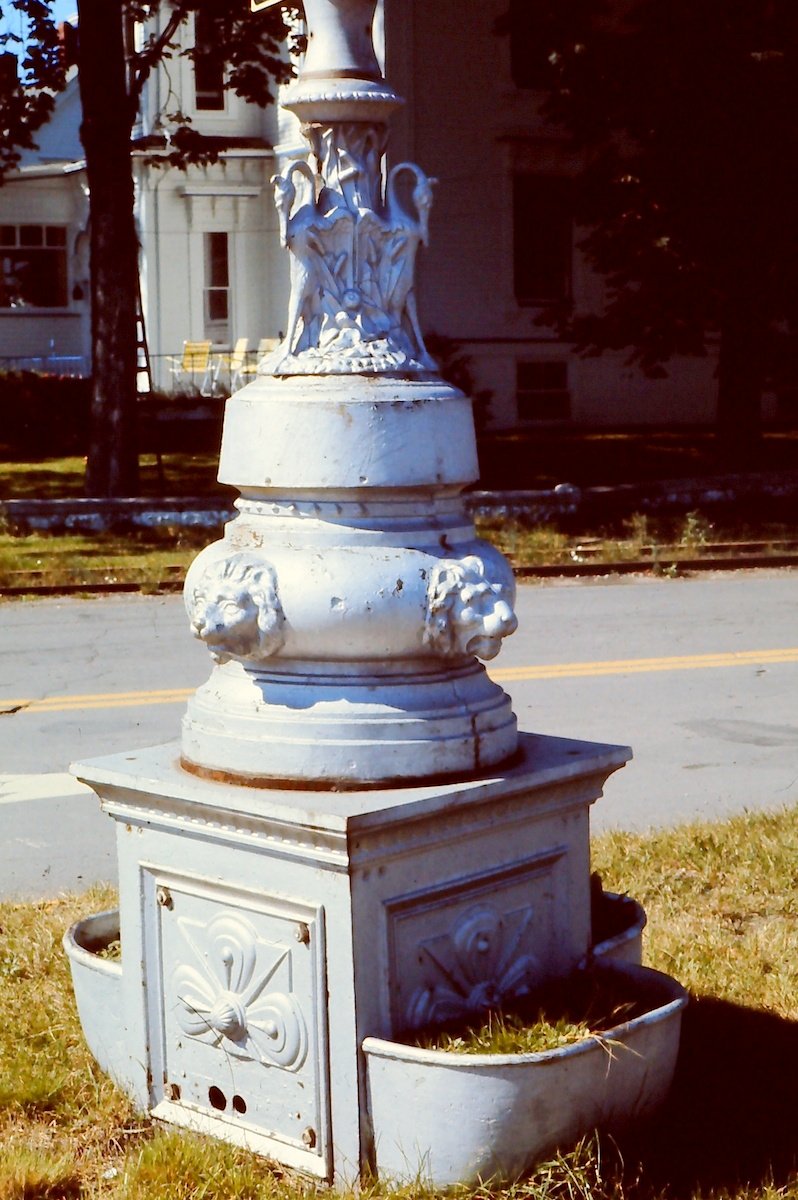 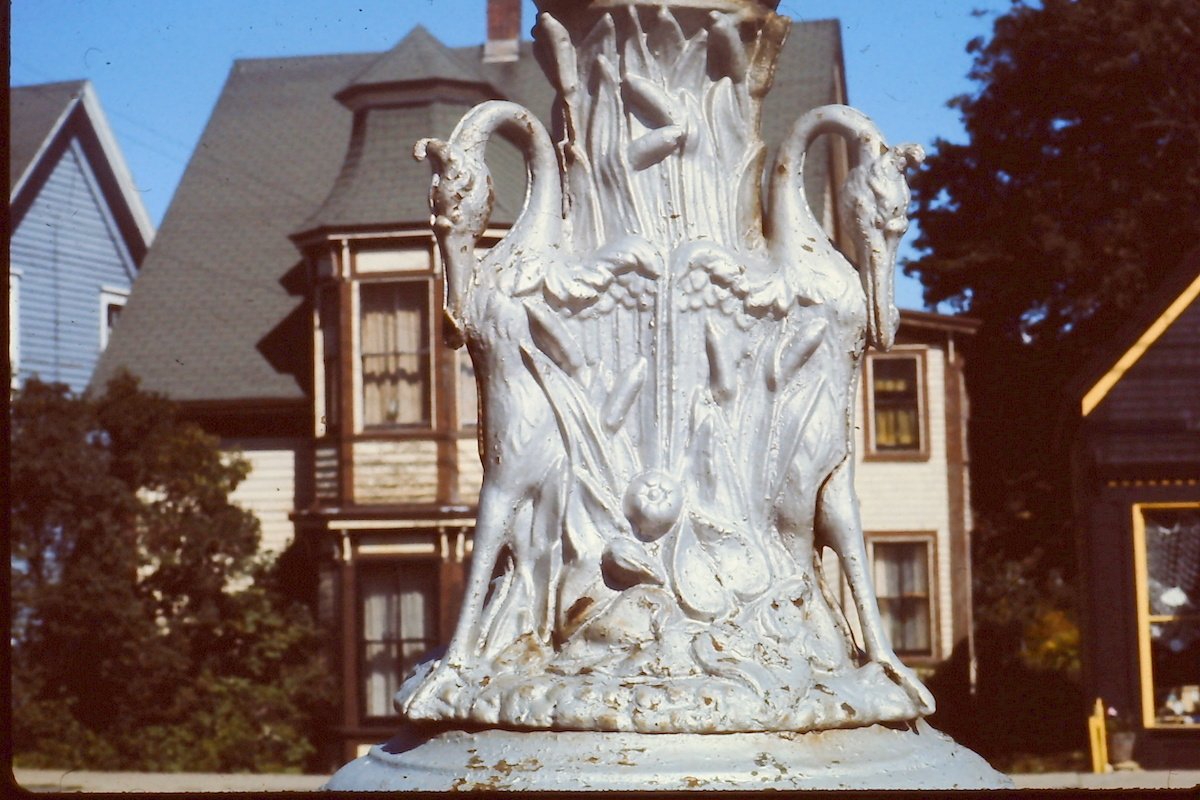 Now there is a helpful plaque that identifies this as a temperance fountain, donated to the town in 1911 by members of the Woman’s Christian Temperance Union. Their goal was to provide water for horses and oxen that were hauling loads to a nearby market, and for men who might be forced to have a beer, if clean water was not available. 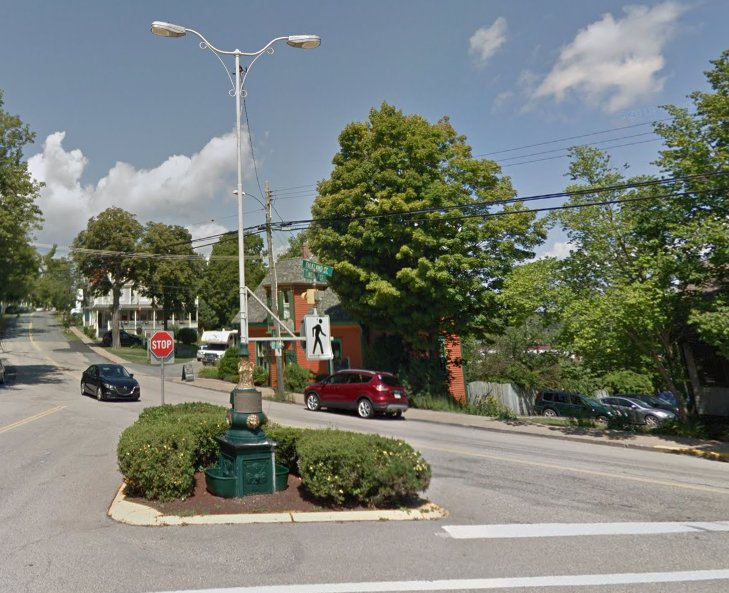 The fountain continues to multi-task as a base for street lights, plus a support for a crosswalk sign, street signs, and a caution light. Google streetview.

I photographed this diminutive drinking fountain also in the 1970s. I believe it was in Parrsboro but the memory is dim. By now we all should be recognizing the clues: lions would have spouted water, the little projecting bracket supported a basin (now missing), the little saucer at ground level for dogs. Plus those bullrushes as a “wetland”motif. 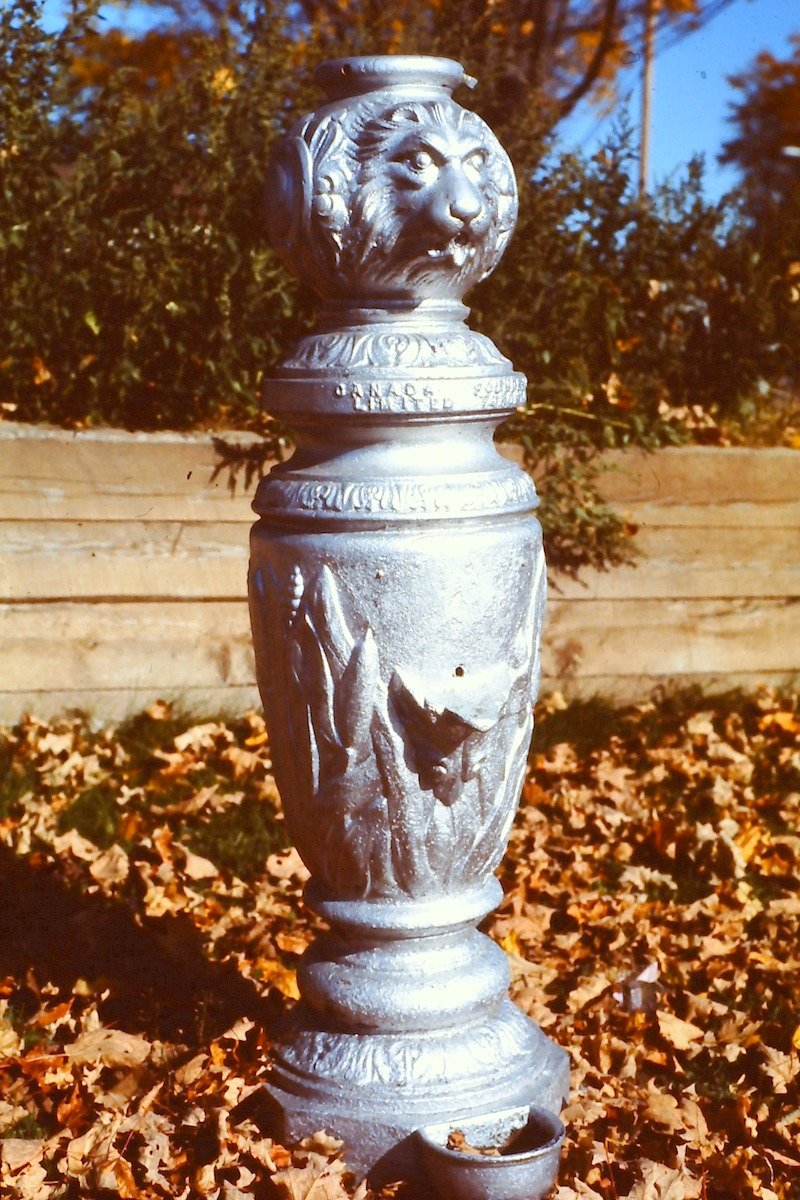 In the middle of the main intersection in Canning is a substantial 1903 memorial to local son, Harold Lothorp Borden, who was killed three years earlier in the Boer War. Today Canada’s participation in that war is not remembered with particular pride, but we can all applaud the practical valley folk for including a drinking fountain and a horse trough (now filled with plants) in the base of the memorial. 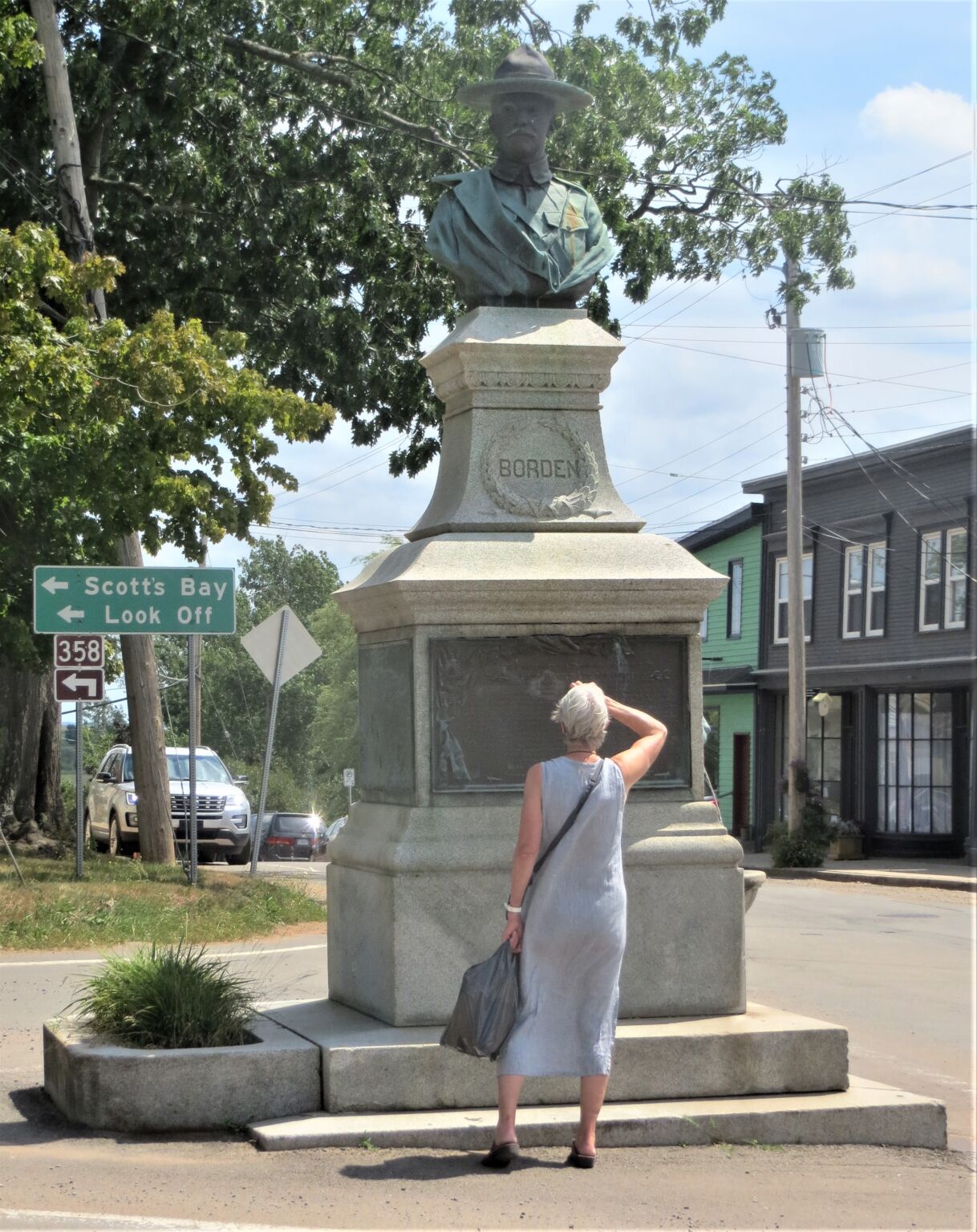 The sculptor was Hamilton Thomas Carlton Plantagenet MacCarthy, who also did the, often despised, Boer War memorial in the middle of the legislature parking lot in Halifax.

When I took these photographs a couple of years ago it was exciting to see that the drinking basin was being filled by a lion with an awesome drool (which was the nickname of our cat). 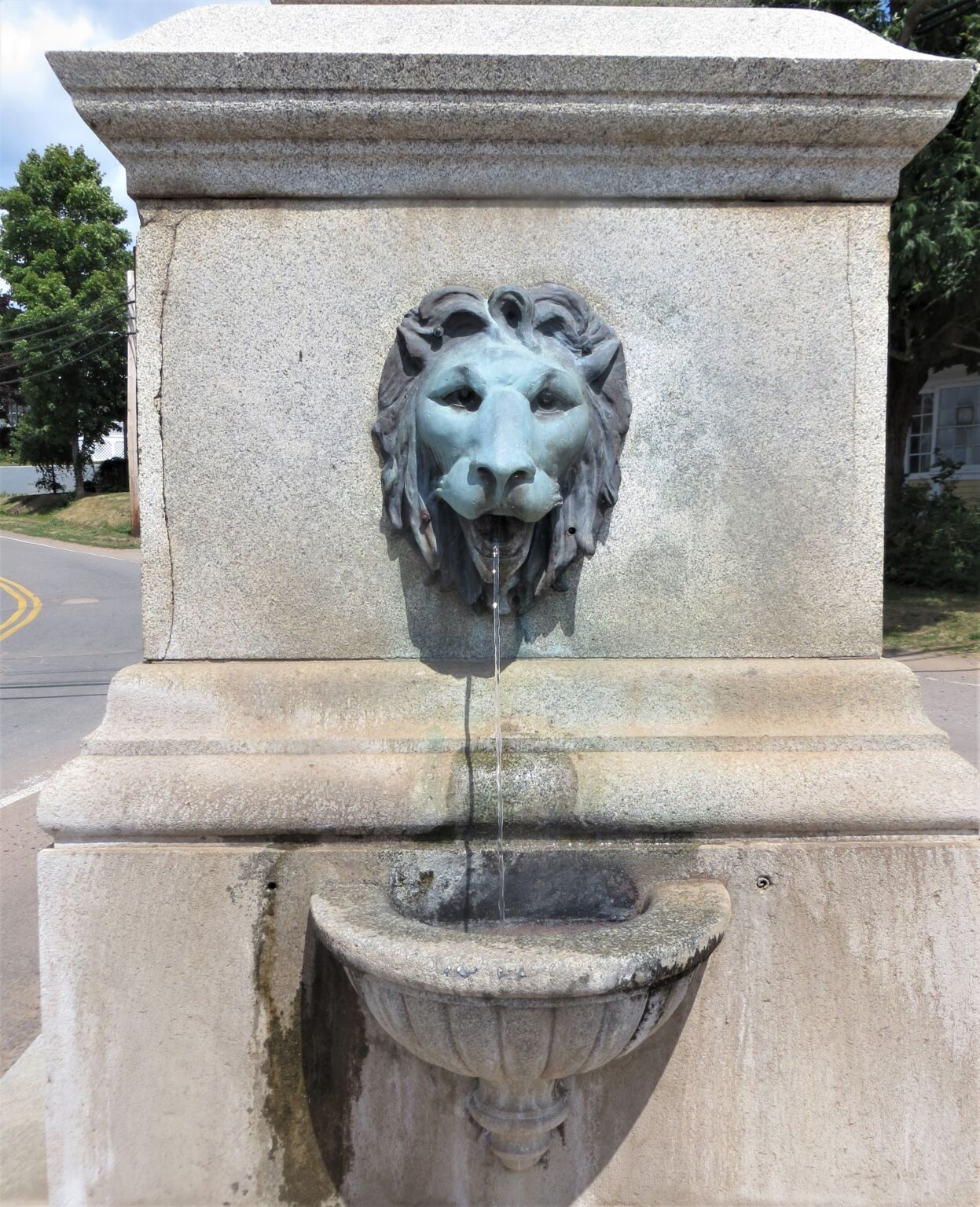 The holes on either side of the basin are perhaps where metal drinking cups were secured on chains. Spreading diseases, like cholera, was a reason that shared cups were removed from water fountains.

Also spouting water again is this robust horse trough in New Glasgow. Can you guess how old it is? 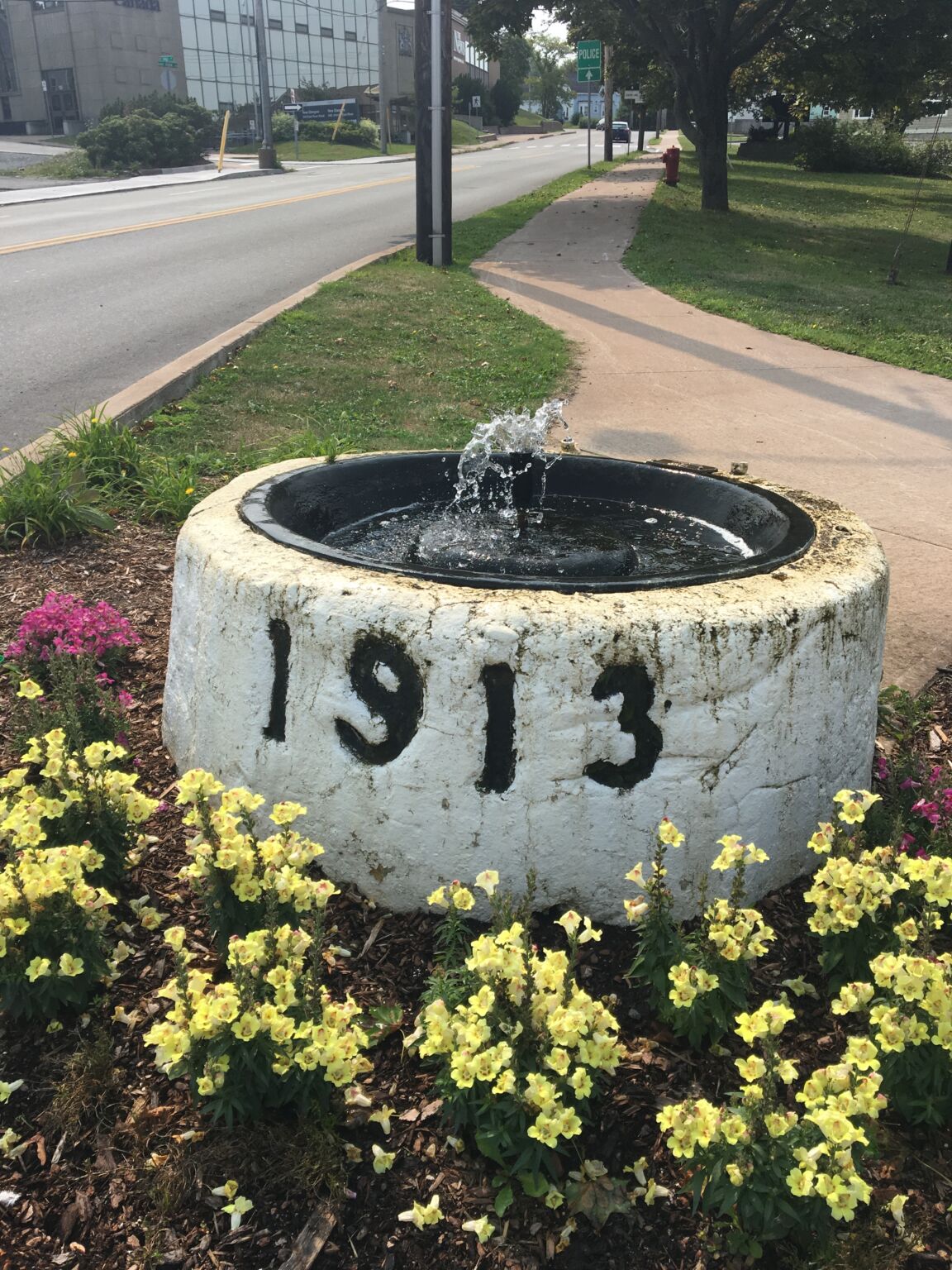 A blurry c1885 photo shows a no nonsense Halifax horse trough in the centre of the intersection where George Street meets Water Street. It appears to be raining and, just like today, traffic is at a standstill. In this case the traffic is a long line of low slung, horse drawn, sloven wagons that were used to transport cargo around the port (the container trucks of the day). 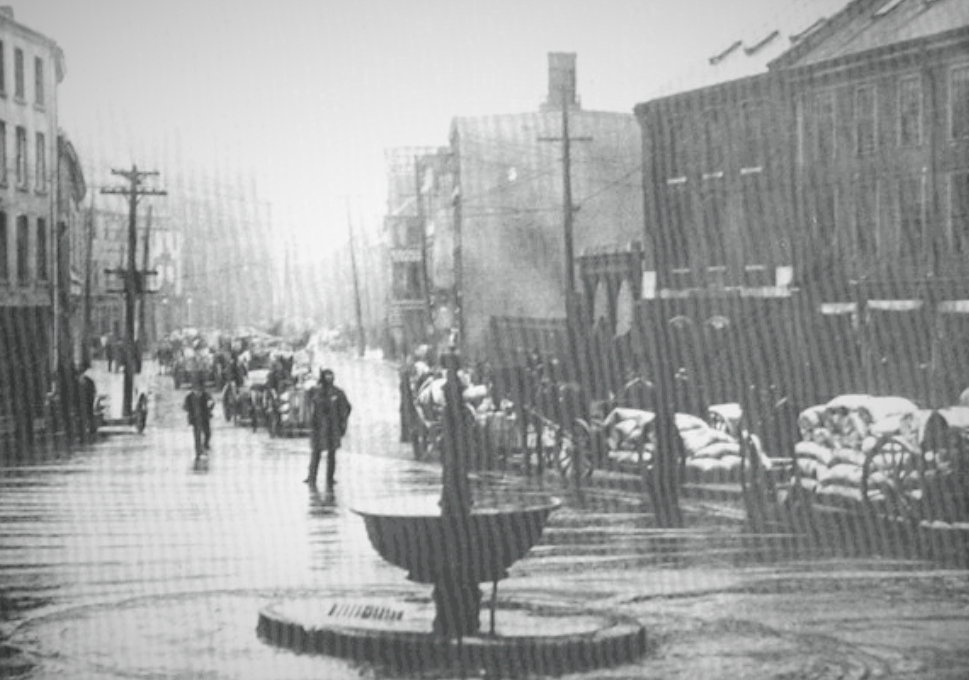 Probably many horse troughs and public drinking fountains were removed when horse power declined and prohibition or soda pop altered drinking habits. But they take so many different forms, there could be more trough examples lurking out there.

In the “museum of street furniture” on the Granville Street Mall in Halifax there are two magnificent, granite horse troughs, but they were not used here and came from England as a surprise gift to the city in the late 1960s.

The one now at the north end of the mall was a standard design of the Metropolitan Drinking Fountain & Cattle Trough Association, and this one was originally installed in the Westminster district of London. The inscription on the side reads “Be kind and merciful to all animals.” 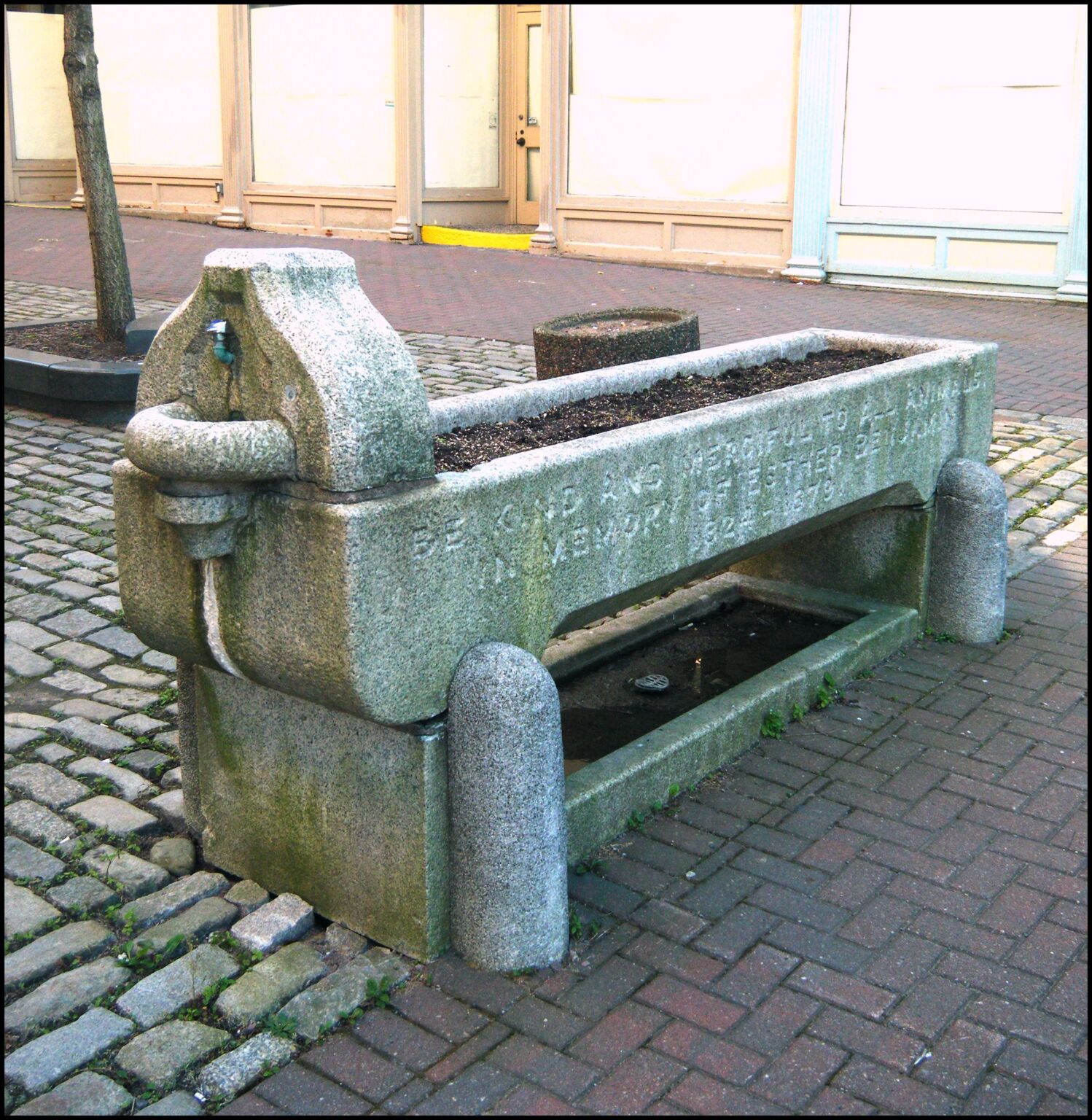 There is lots of interesting info online about the MDFCTA and you can see many examples of this design in their original locations and now filled with flowers.

A more decorative drinking fountain is at the south end of the mall. I particularly like the dog bowls at the base. 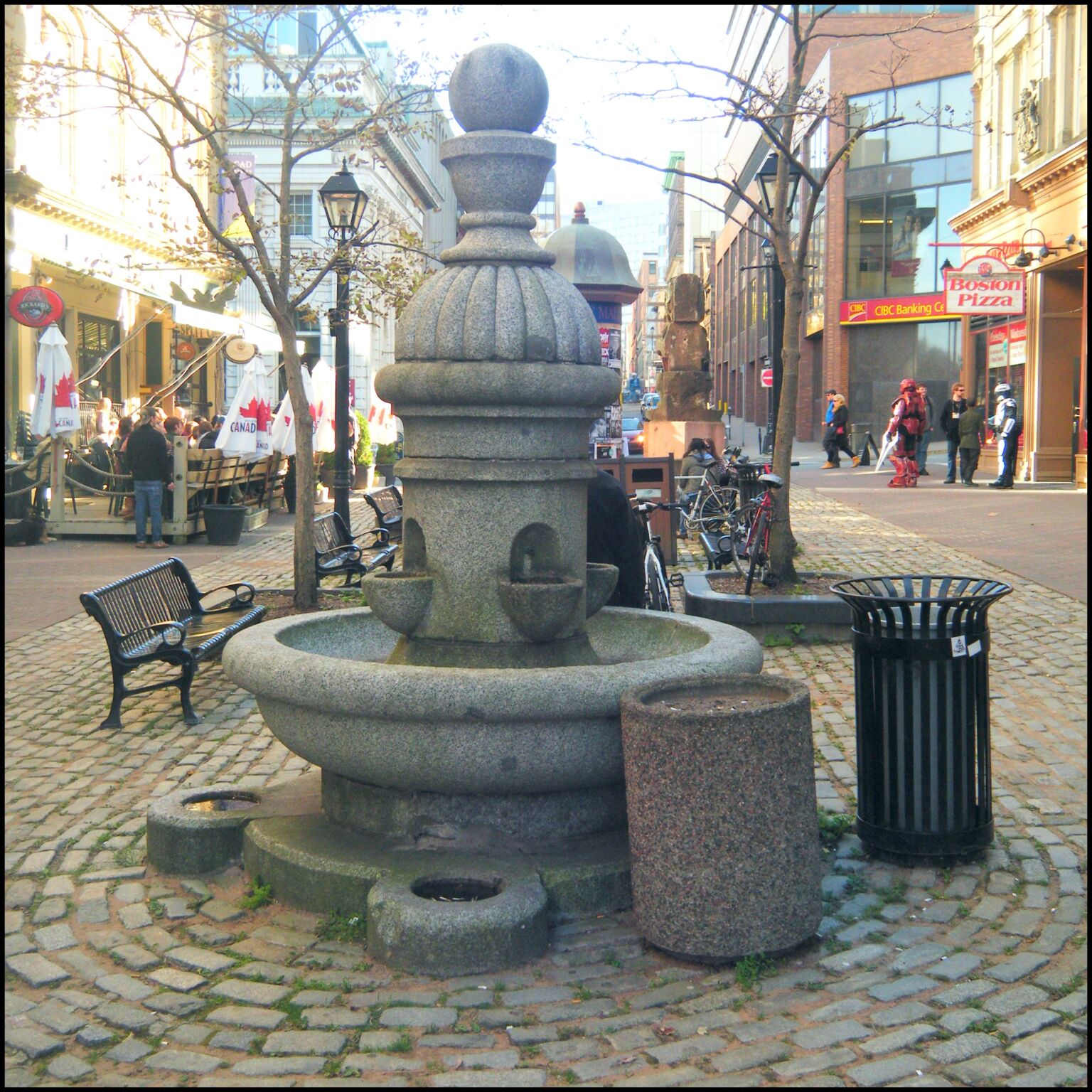 Last fall I spent a delightful afternoon with a class of NSCAD students, looking at the wonders of Granville Street. I enlisted them to do a rubbing of the inscription on the water fountain that was hard to read. It says: “Erected in memory of Harriett Allison by the Ladies Auxiliary and other friends.” 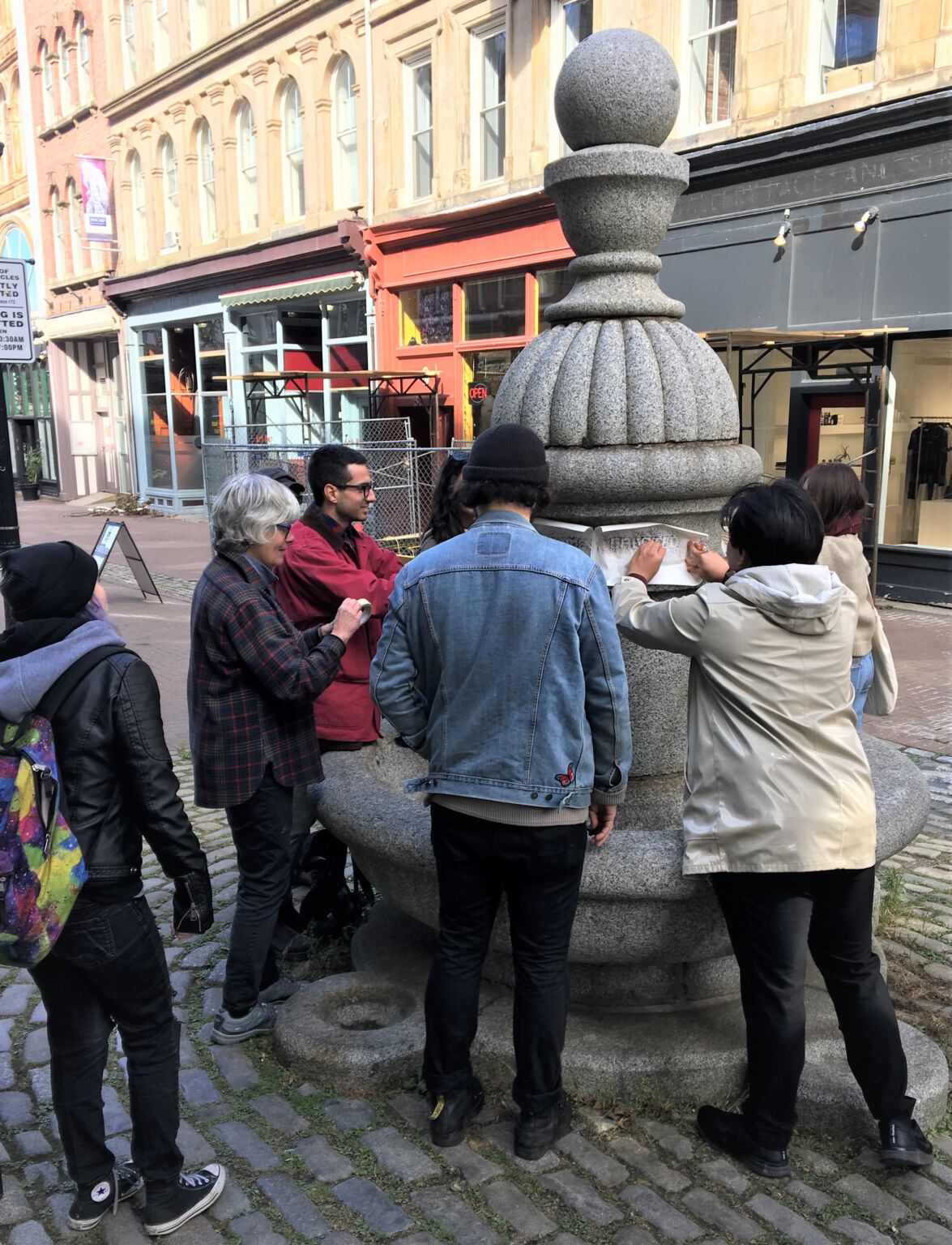