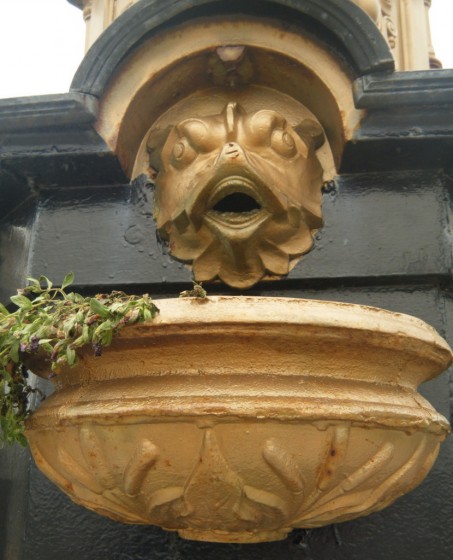 Imagine my surprise to read in Halifax Examiner that editor Tim Bousquet feels that “any place with a horse fountain is all right by me.” He had just discovered the famous horse trough in Milton (Yarmouth).  It felt like Tim had been reading my mail because the Yarmouth horse troughs were on my list of blog topics. So why not now.

We are lucky in Nova Scotia that many of our old towns have their own special architectural character. Yarmouth looks across the Gulf of Maine and feels particularly New England.  It was prosperous at the end of the 19th century and several well-to-do families donated American made, cast iron water troughs to their community,  just like was happening in the States.

This was a time when humane societies were concerned about the treatment of work horses. The troughs also provided low water basins for dogs and usually a water spout for people. Temperance groups were fans of these water troughs because without public water sources, a thirsty person might be tempted to wet their whistle in a bar.

The base of the 1893 Milton trough is cast iron and the the horse sculpture is cast zinc.  You can see the troughs for humans, horses and dogs.  Petunias replace the water. Zinc was often used for sculpture at end of the 19th century because it was relatively easy to cast. Both the iron and the zinc were intended to be painted  and often people today imagine they are looking at bronze sculpture. The horse looks great but has had serious repairs (I believe it was hit by a snow plow in the 70s). An equally wonderful trough is on the far side of Yarmouth. It was also a donation and was erected in 1895.  Here the basins for horses and dogs have gone missing. These troughs were made by large foundries in New York who sold their wares all over North America.  For example a copy of the horse sculpture was used on a trough in Bridgeport Connecticut, erected to honour the founder of the SPCA in America.

I was delighted in March, when were visiting Mexico City, to come upon a version of the second Yarmouth trough;  both were produced by the same New York foundry.  The trough  was in a small park and had very Spanish looking lamps attached to the urn.  It is interesting to see it with the basins still in place and the cast iron painted a bronzy colour (Yarmouth on the left, Mexico City right). And in Mexico there was water flowing into the basins we use for petunias.